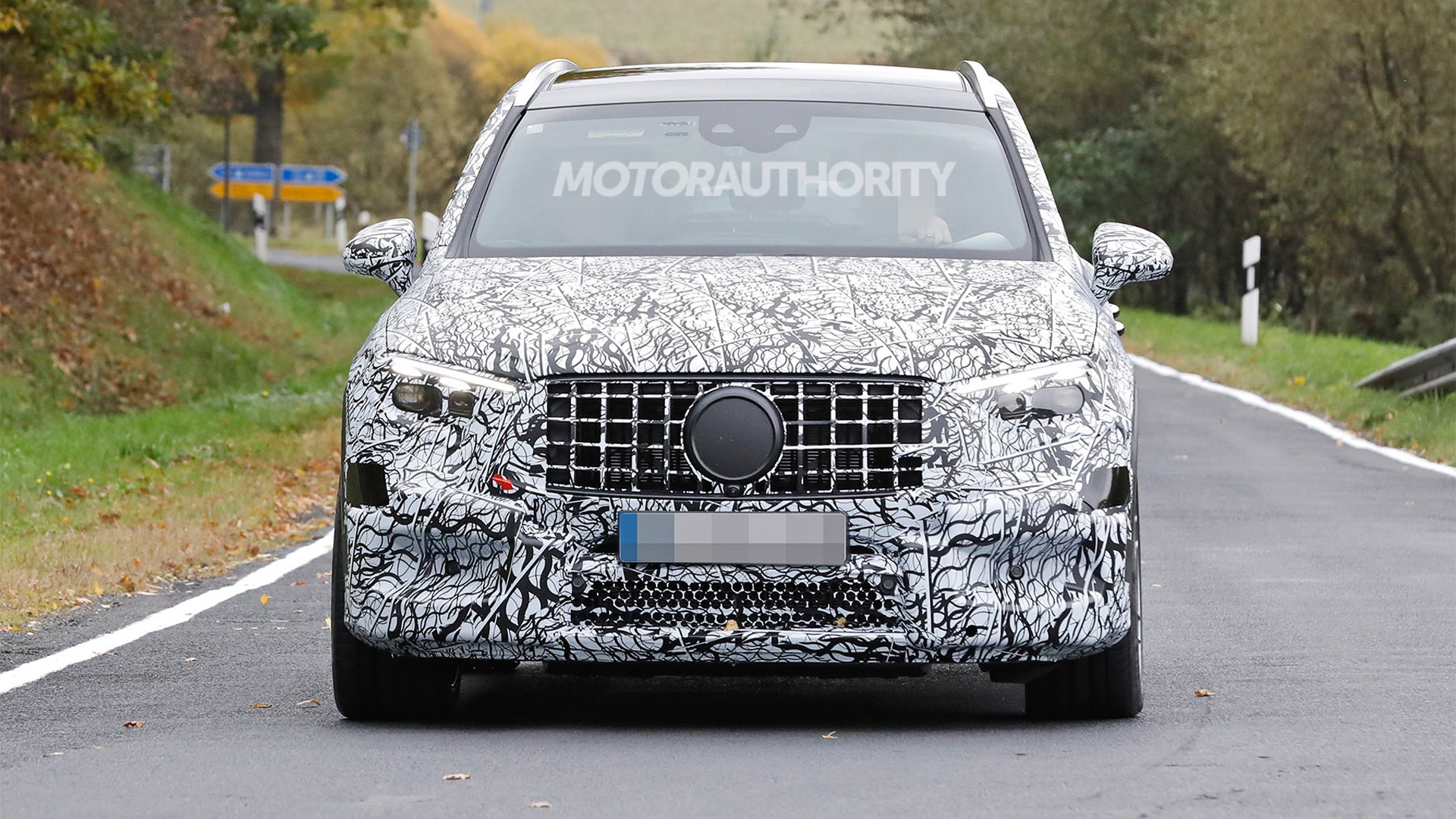 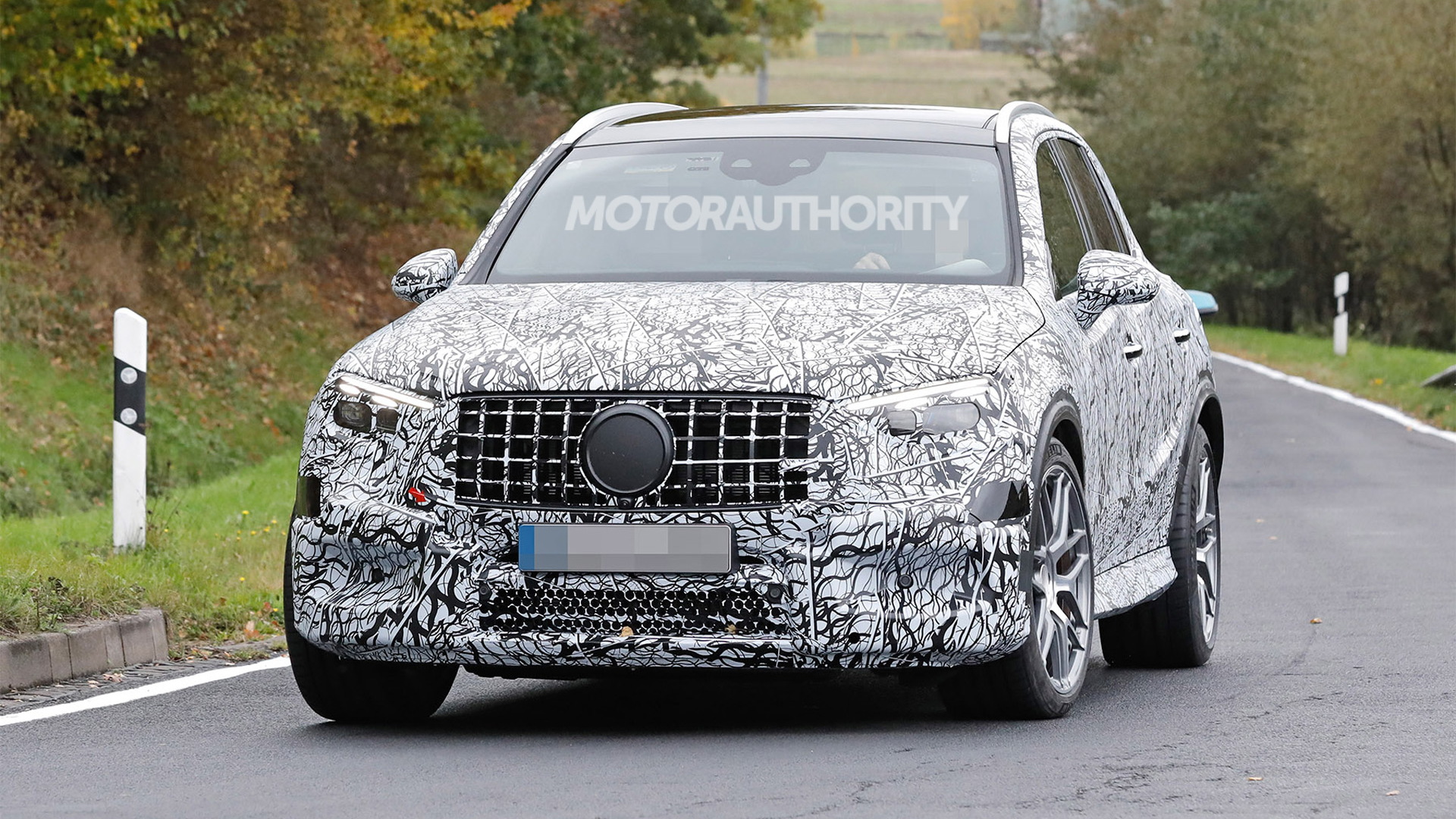 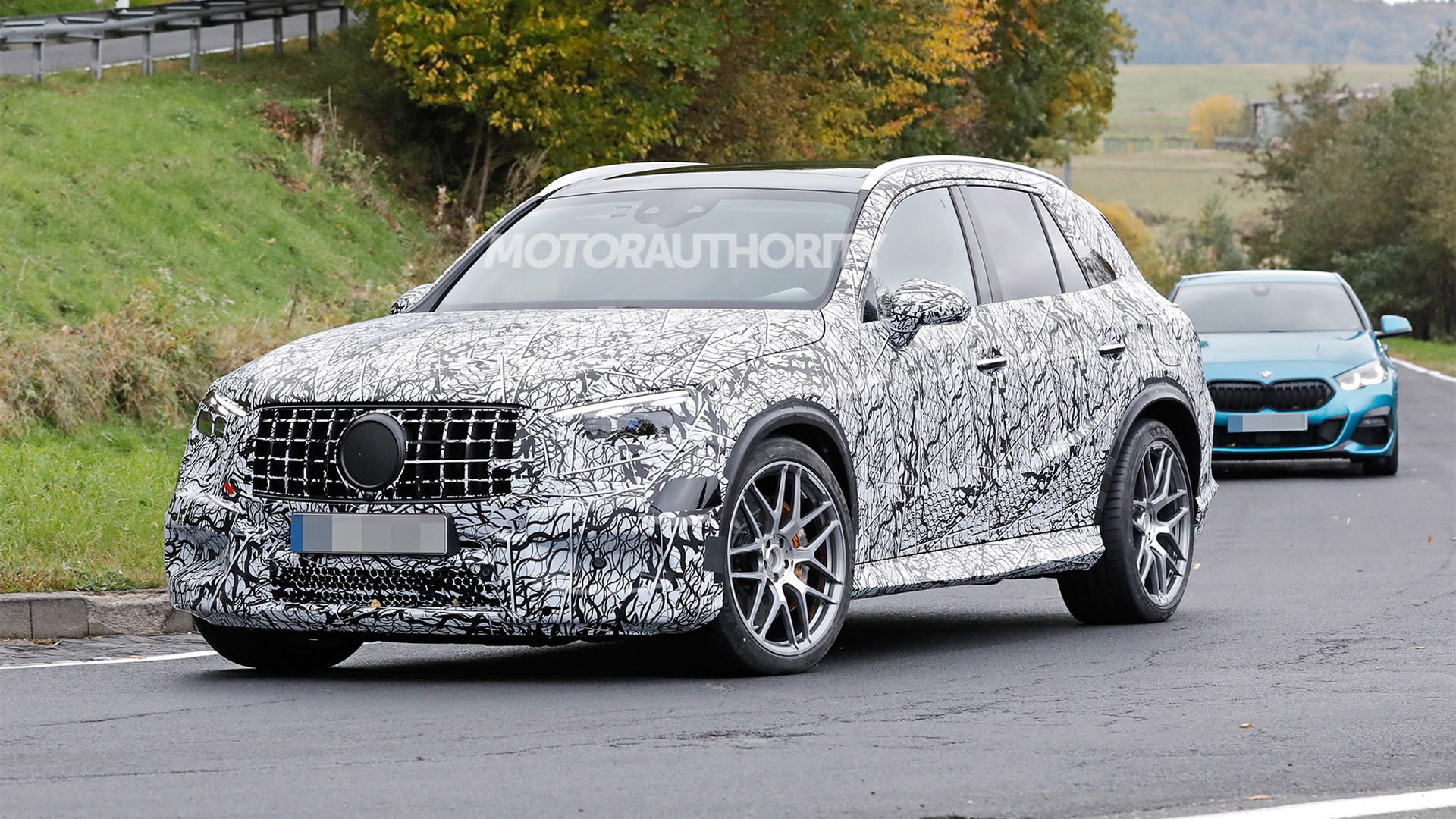 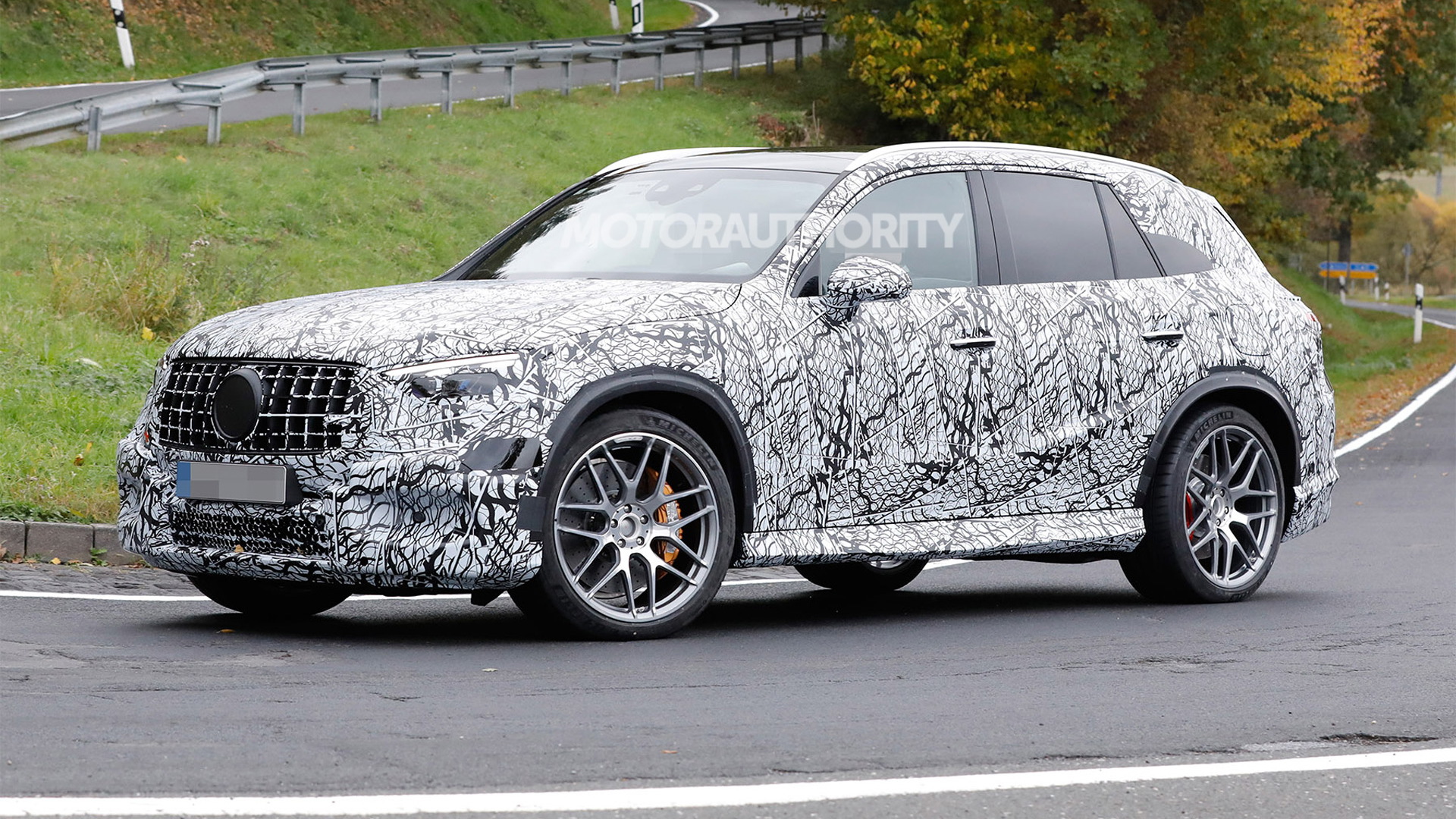 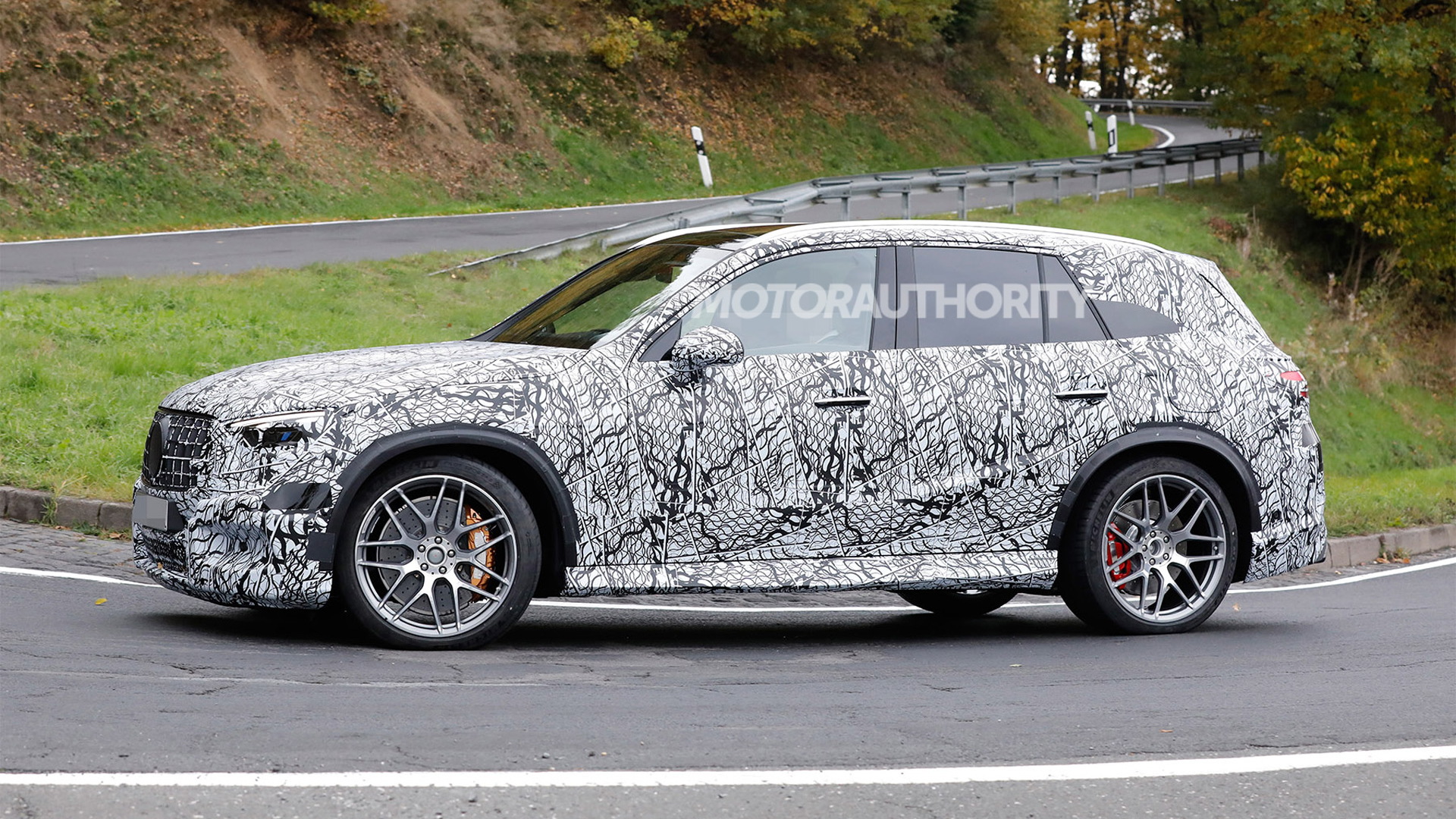 Mercedes-Benz is close to revealing a new generation of its GLC-Class. Prototypes have been spotted for over a year but today we have our first shots of the upcoming small crossover's GLC 63 performance variant developed by Mercedes-Benz AMG.

The current GLC 63 and spicier GLC 63S are Motor Authority favorites, thanks to their aggressive looks, track-honed suspension, and of course the V-8 lump under the hood.

For the redesigned GLC 63, the V-8 will be replaced by a sophisticated plug-in hybrid powertrain relying on a 4-cylinder engine for its internal-combustion component. The new setup, signified by new E Performance branding, has already been previewed by AMG and debuts shortly in a redesigned C63.

The 4-cylinder is an upgraded version of the 2.0-liter turbocharged inline-4 found in AMG's current crop of compact cars. Thanks to the addition of an electric-aided turbocharger, output from the engine will be boosted to 442 hp for the GLC 63. There will also be an electric motor integrated with the engine in mild-hybrid configuration to power ancillary features, as well as serve as a starter motor.

On top of all this, there will be a much more powerful motor (up to 201 hp) at the rear axle to take combined output to a maximum 643 hp. This rear motor will be mated to its own 2-speed transmission. A battery of 6.1 kilowatt-hours of capacity will ensure a small electric range will be possible.

In the case of the GLC 63, the maximum 643-hp figure is expected to be reserved for a GLC 63S E Performance range-topper. Expect a tamer GLC 63 E Performance to have around 550 hp, which is still up significantly on the 503 hp of the outgoing GLC 63S.

Another upgrade we can look forward to in both redesigned GLC 63 variants will be all-wheel steering.

The redesigned GLC-Class is due in 2022 as a 2023 model. Look for the GLC 63 variants to arrive roughly six months after the launch of the regular crossover. A redesigned GLC 43, possibly renamed a GLC 53, is also coming with hybrid power.