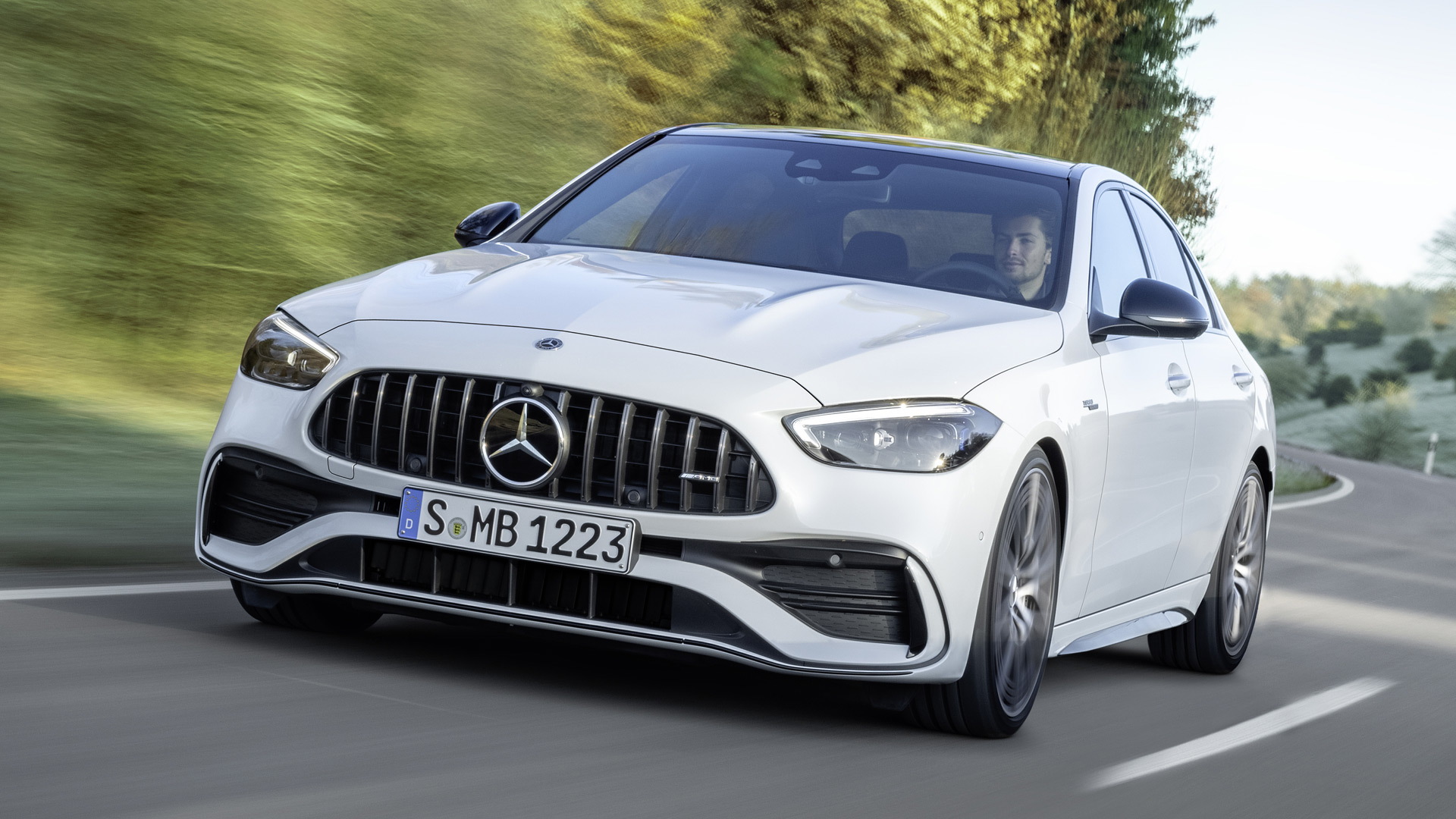 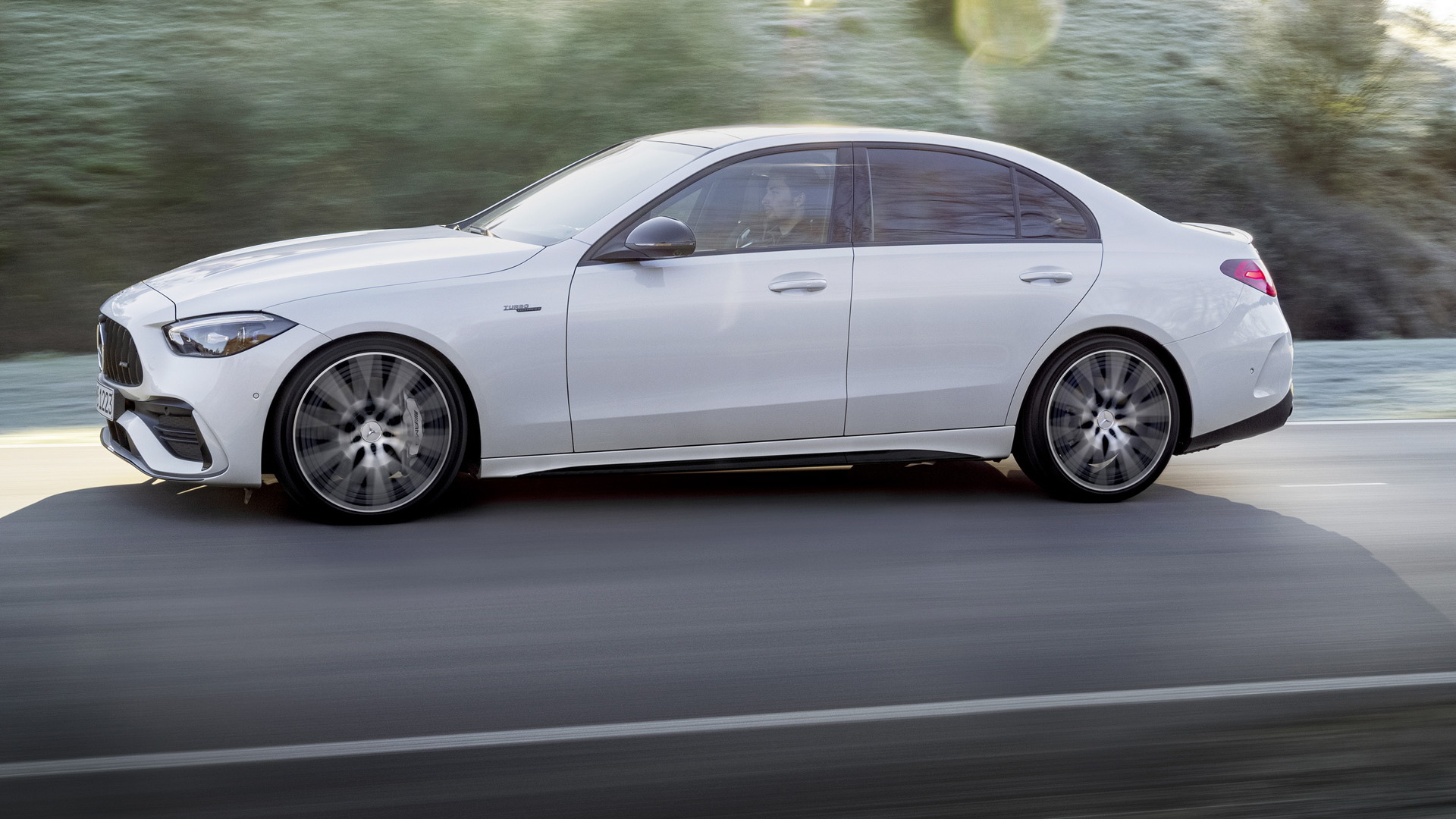 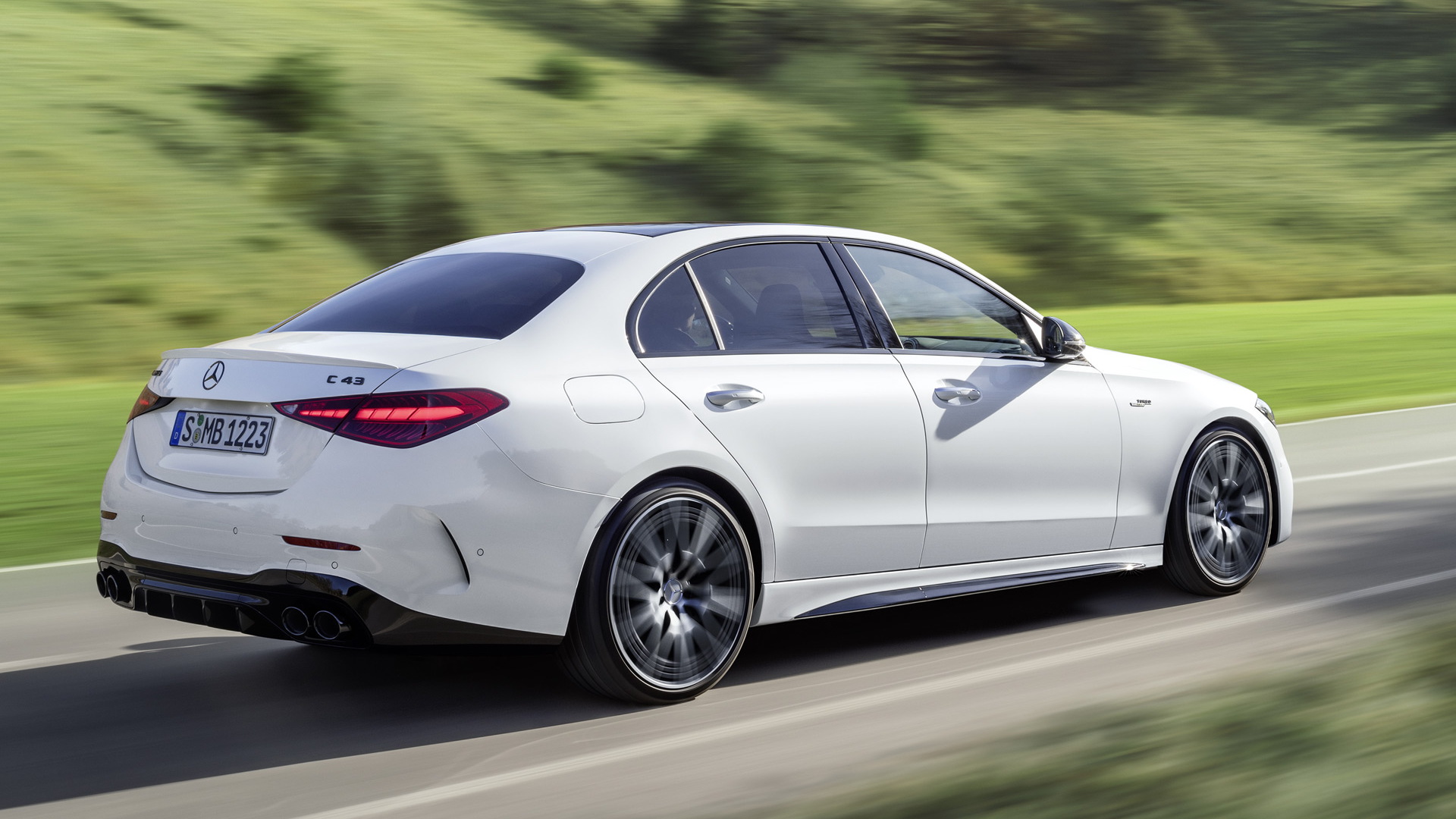 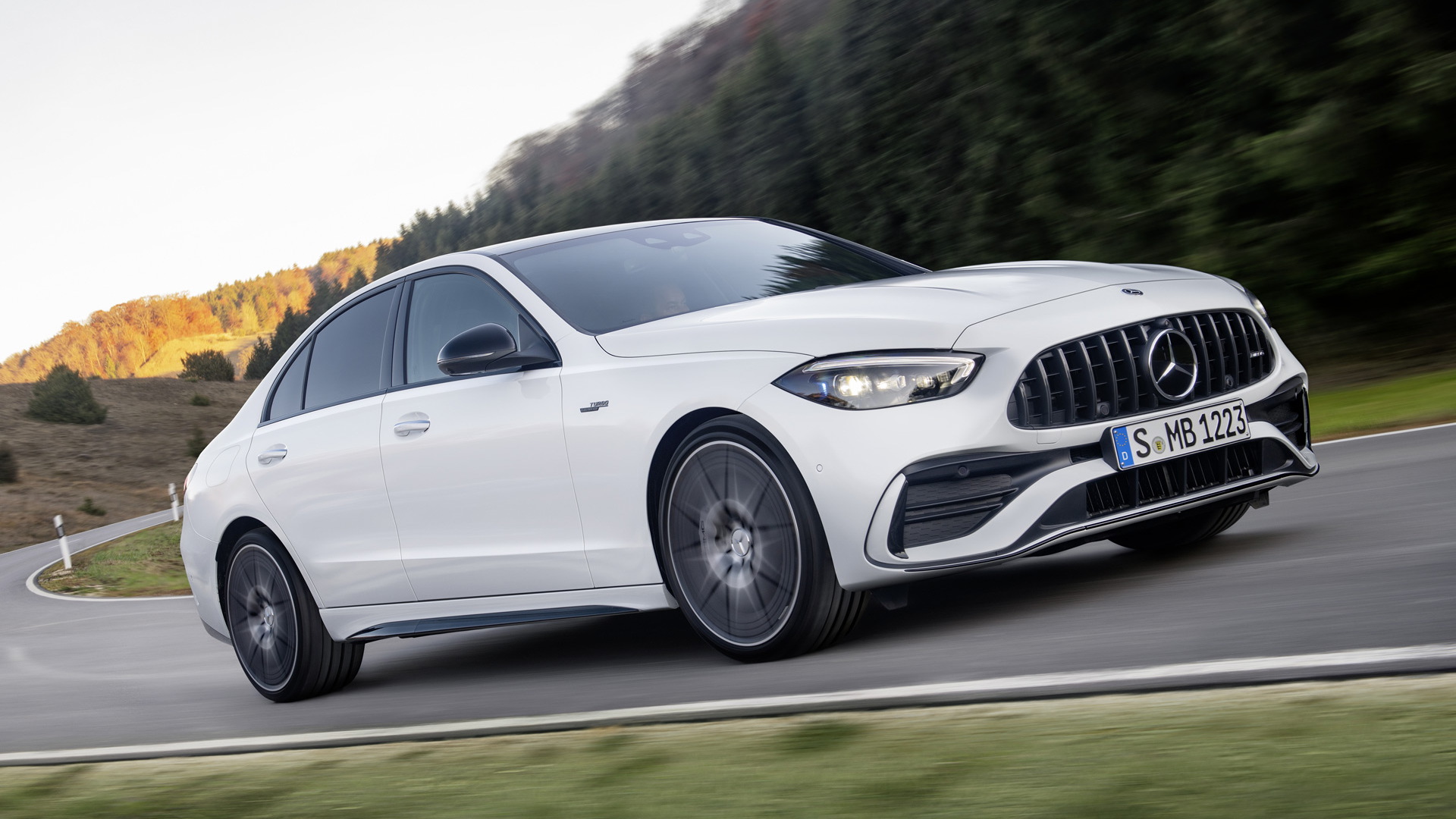 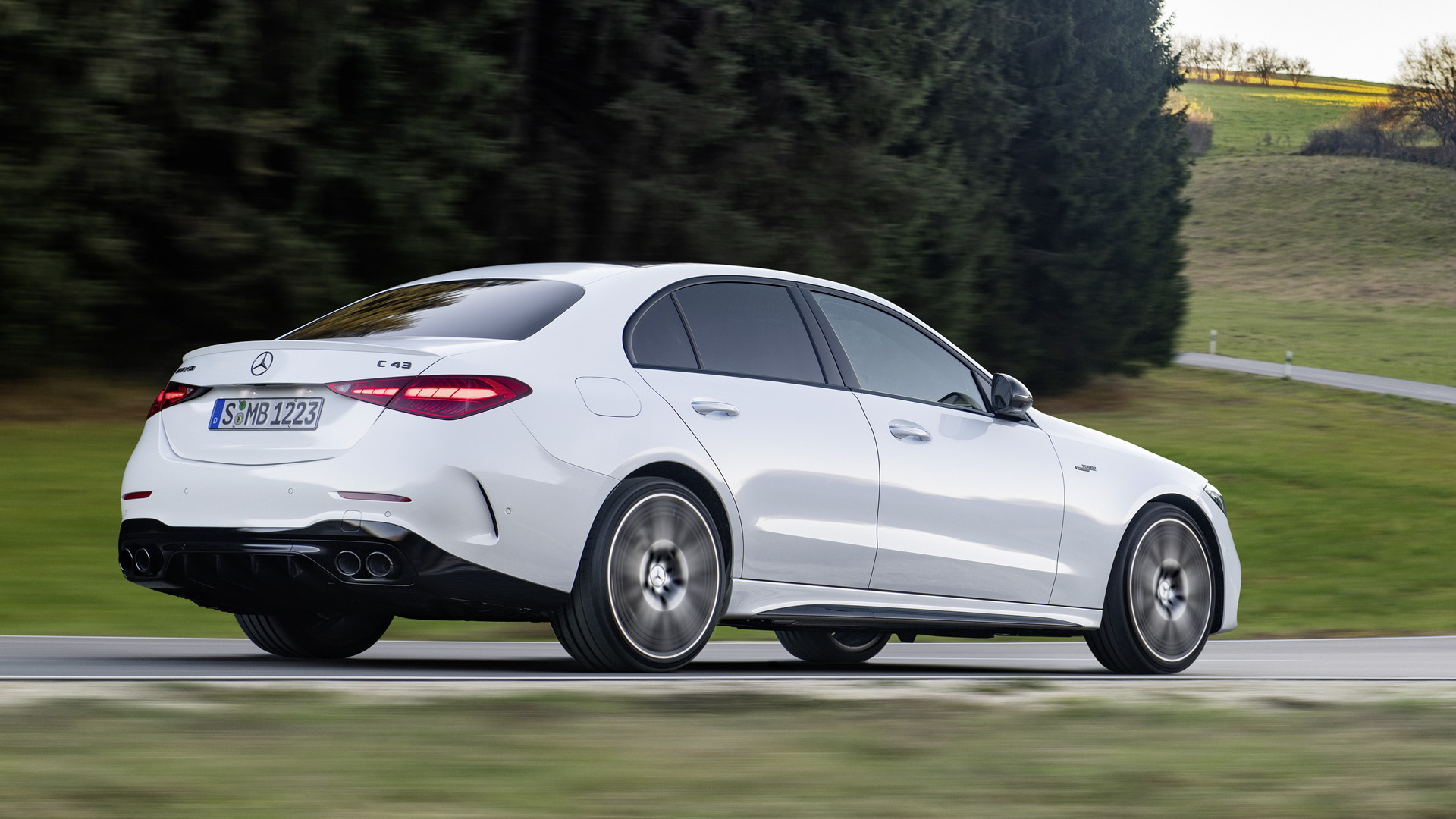 Mercedes-Benz has a redesigned 2022 C-Class on its way to showrooms across the country and once again the nameplate will offer performance models developed by Mercedes-Benz AMG.

The first of the AMG-enhanced C-Class models to arrive is the new C 43 which is being introduced for the 2023 model year and should be at showrooms later in the year. A new C 63 is also in the pipeline and should make its own debut shortly.

The new C 43 has dropped the inline-6 engine of its predecessor in favor of an inline-4, specifically a 2.0-liter turbocharged inline-4 in combination with a 48-volt mild-hybrid system. The inline-4 is the same engine that made its debut recently in AMG's SL 43, meaning it features an electrified turbocharger design similar to what's found in Formula One.

An electric motor is integrated directly with the turbocharger, sitting between the turbine wheel on the exhaust side and the compressor wheel on the intake side. It spools up the compressor at low revs, before the exhaust gases take over, reducing turbo lag and as a result making the engine more responsive. In F1, the electric motor is also used to recover energy from the exhaust, though this ability isn't found in the C 43. Instead, the car's mild-hybrid system is used to recover energy.

The engine in the C 43 generates 402 hp and 369 lb-ft of torque on its own, with the mild-hybrid system, essentially a beefed up starter motor that also acts as a generator, able to provide a temporary boost of 13 hp during high-load situations. Drive goes to all four wheels via a 9-speed automatic and rear-biased all-wheel-drive system (31/69 front-to-rear split), and AMG also fits an all-wheel-steering system as standard.

Performance claims include 0-60 mph acceleration in 4.6 seconds and a top speed governed to 155 mph with the standard 18-inch wheels. Opt for 19- or 20-inch wheels and the top speed can be raised to 165 mph.

Beyond the powertrain, the C 43 benefits from sport-tuned suspension with steel springs and adaptive dampers. The latter is controlled in part by the Comfort, Sport and Sport+ modes of AMG's Dynamic Select drive mode selector. Other modes include Slippery and Individual. Some of the modes also affect the speed-sensitive steering system fitted to the C 43.

Stopping power in the C 43 comes from a brake system with 4-piston calipers and 14.6-inch rotors up front and single-piston and 12.6-inch rotors at the rear. The quoted curb weight of the C 43 is 3,893 pounds.

The exterior design of the C 43, much like that of the regular C-Class, has taken an evolutionary route. Things inside are much more dramatic thanks to a 12.3-inch floating display for the instrument cluster and a similar 11.9-inch floating display for the infotainment system. Key AMG elements include a thick-rim, flat-bottom steering wheel, plus bucket seats for the driver and front passenger. A head-up display and performance data recorder are optional.

Mercedes is yet to announce availability and pricing for the C 43 just yet.

For the new C 63, there will be a similar mechanical setup to the C 43, but with more power from the 4-cylinder engine (sorry, V-8 fans) and an additional electric motor also thrown into the mix. This additional electric motor will sit at the rear axle and help take combined output to over 600 hp. The C 63 is also expected to feature a big battery that will enable a pure electric range.

For more on the C-Class, read the in-depth reviews at The Car Connection.