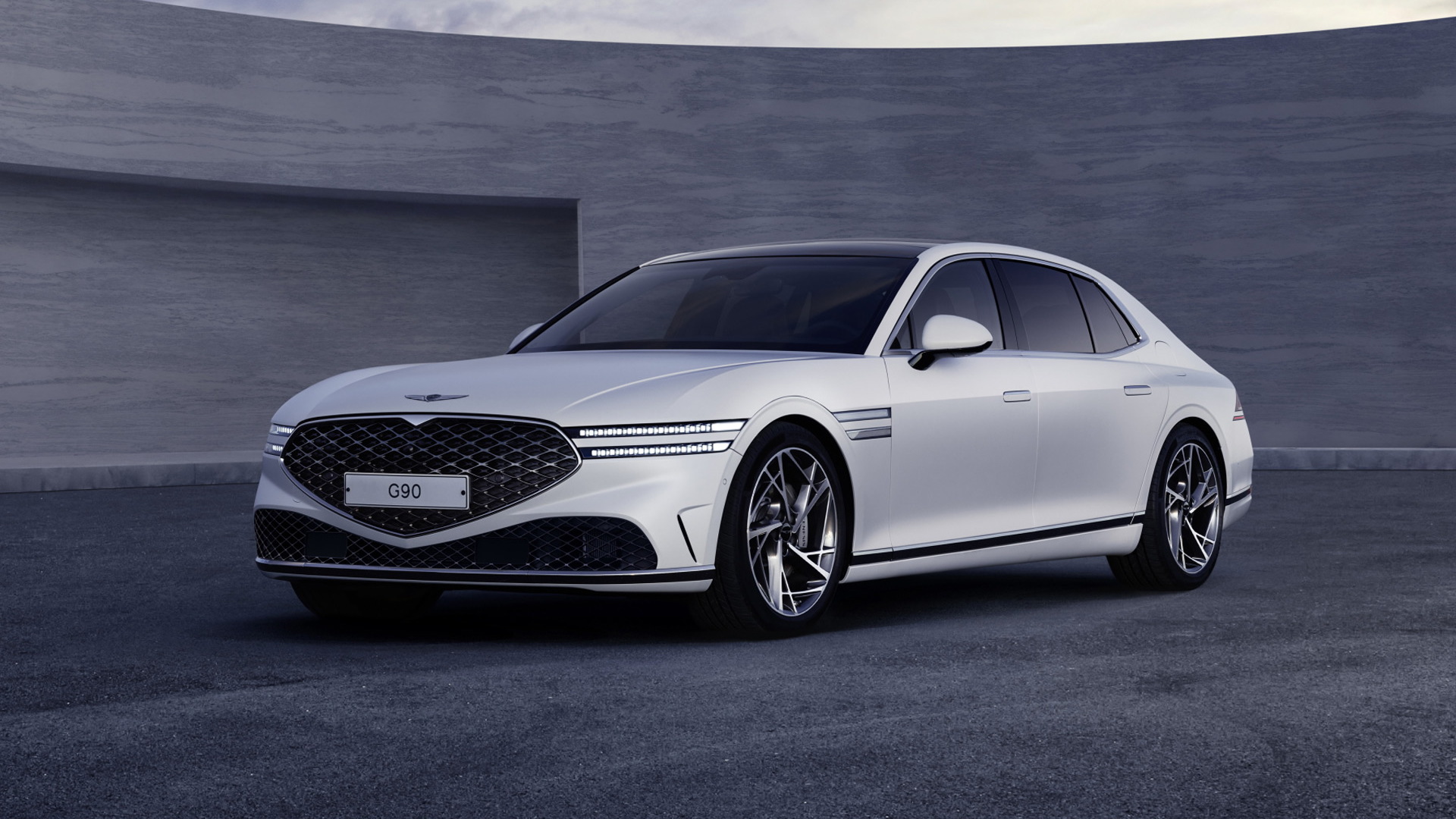 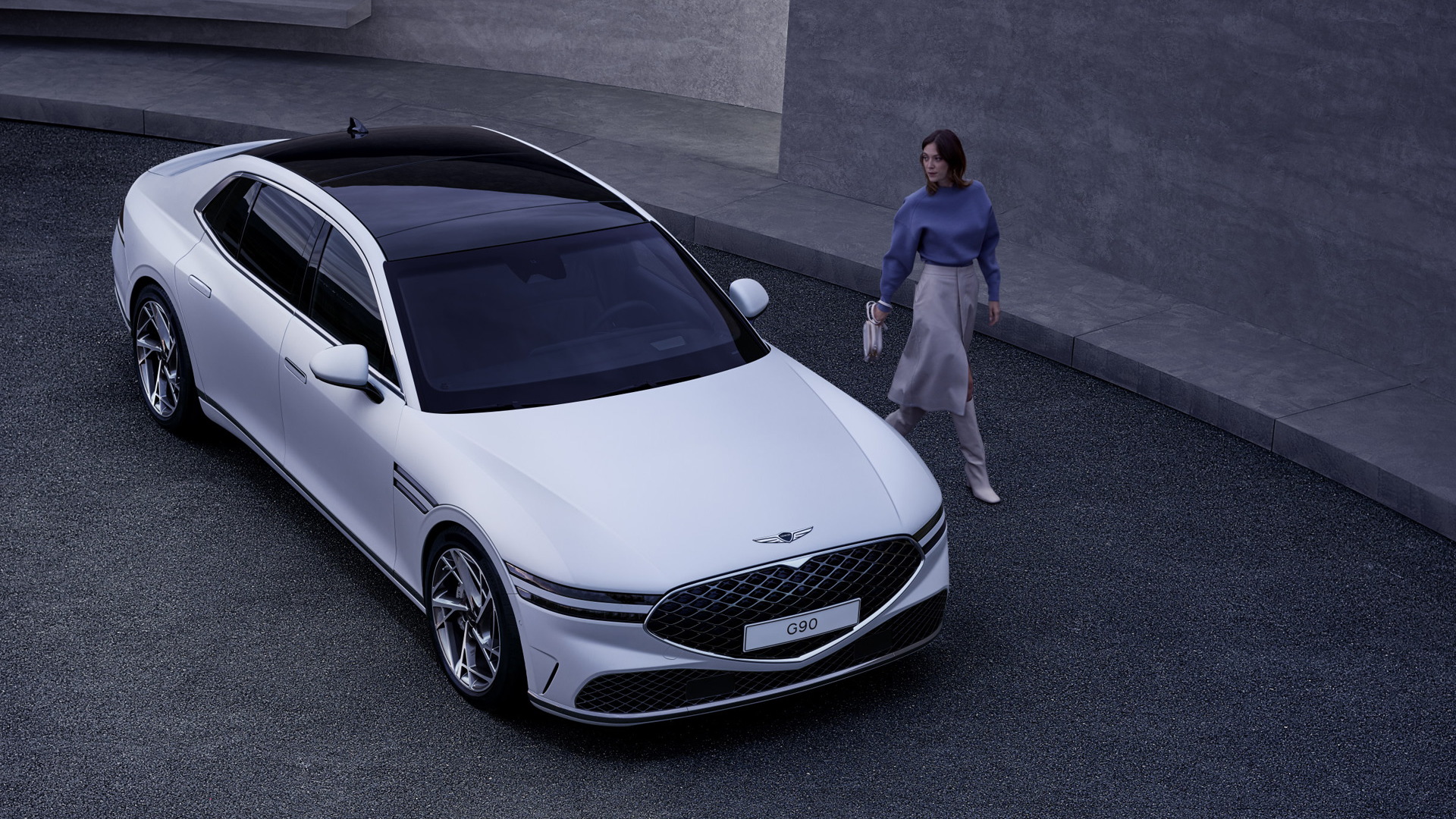 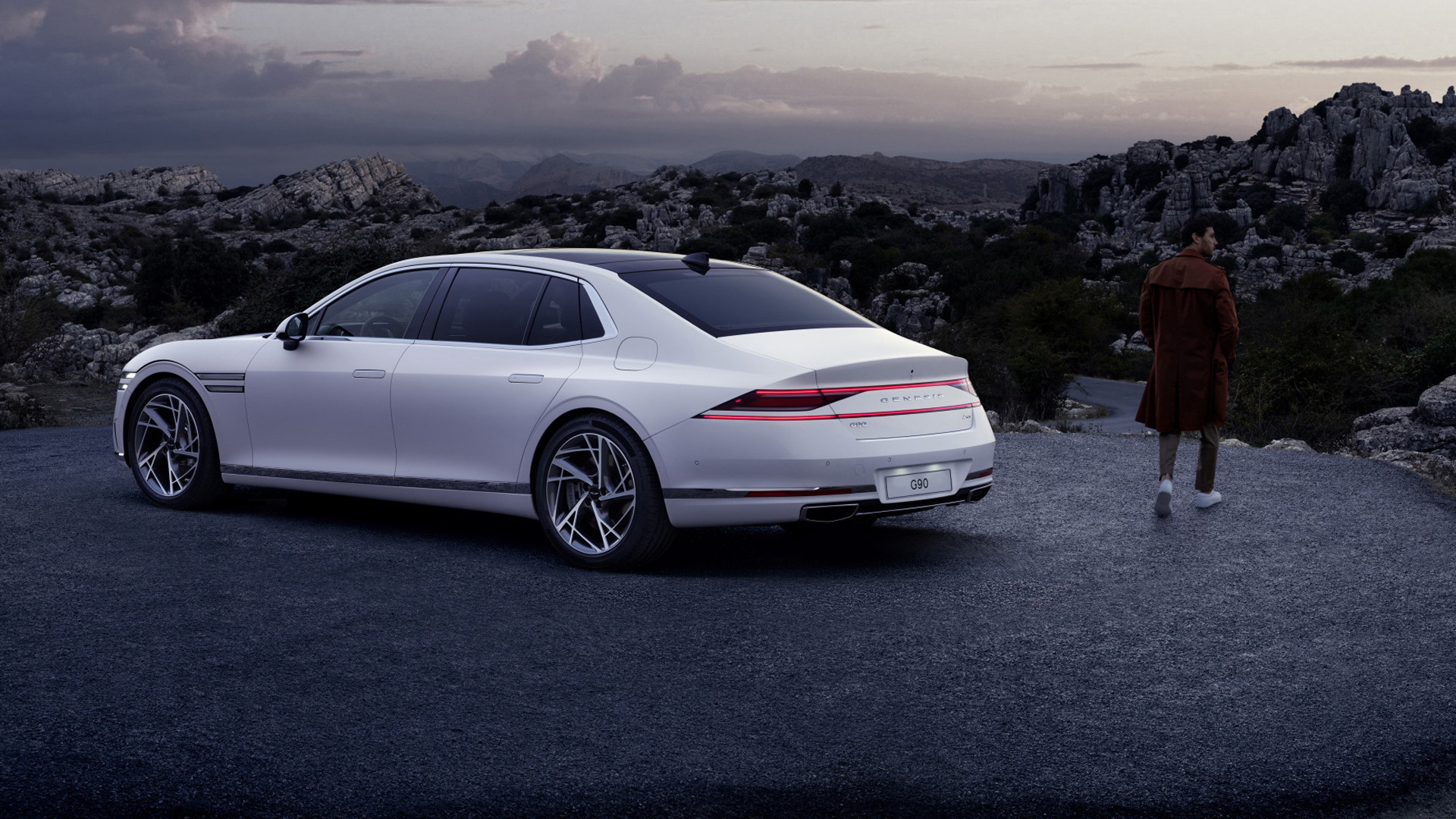 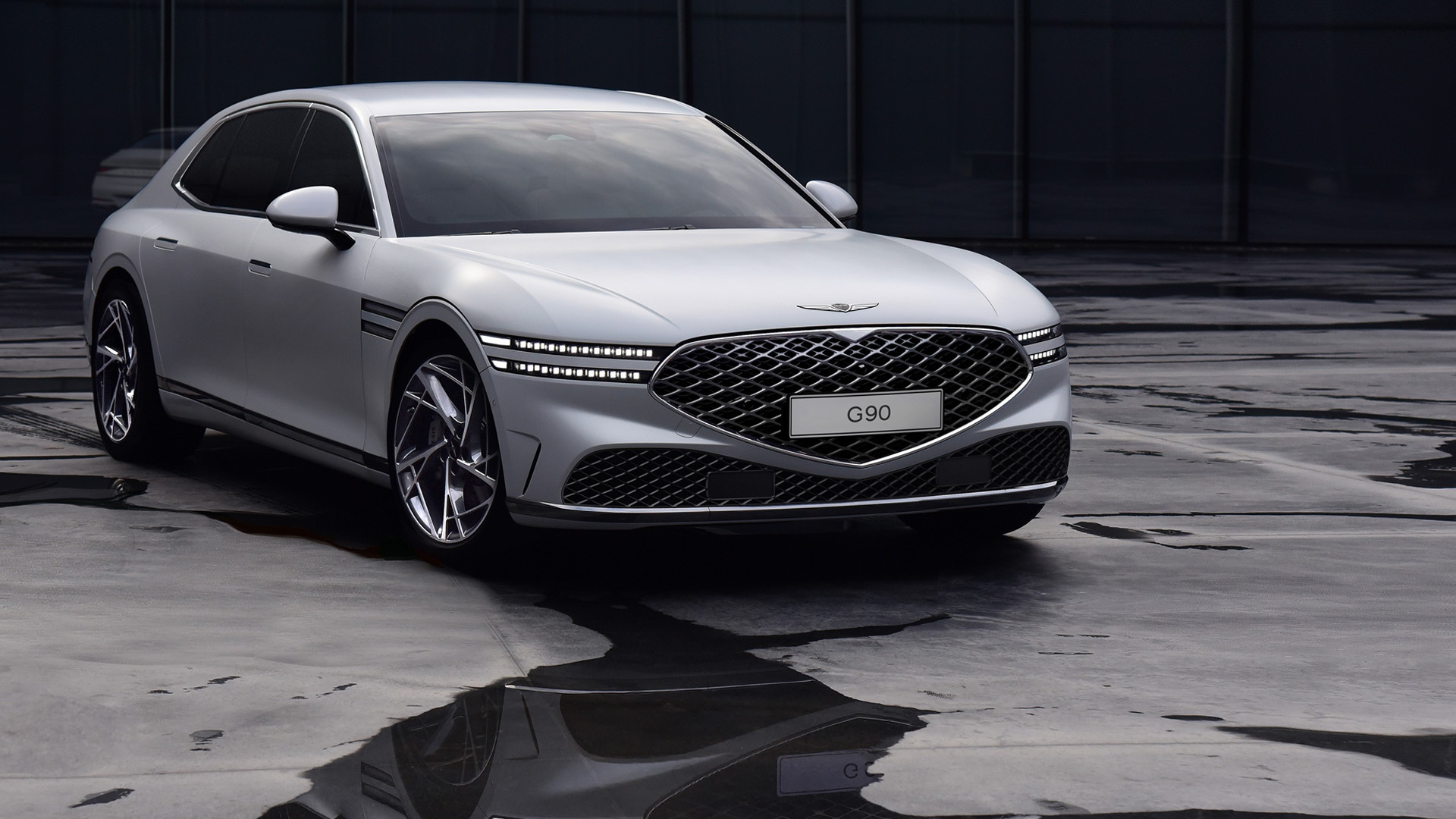 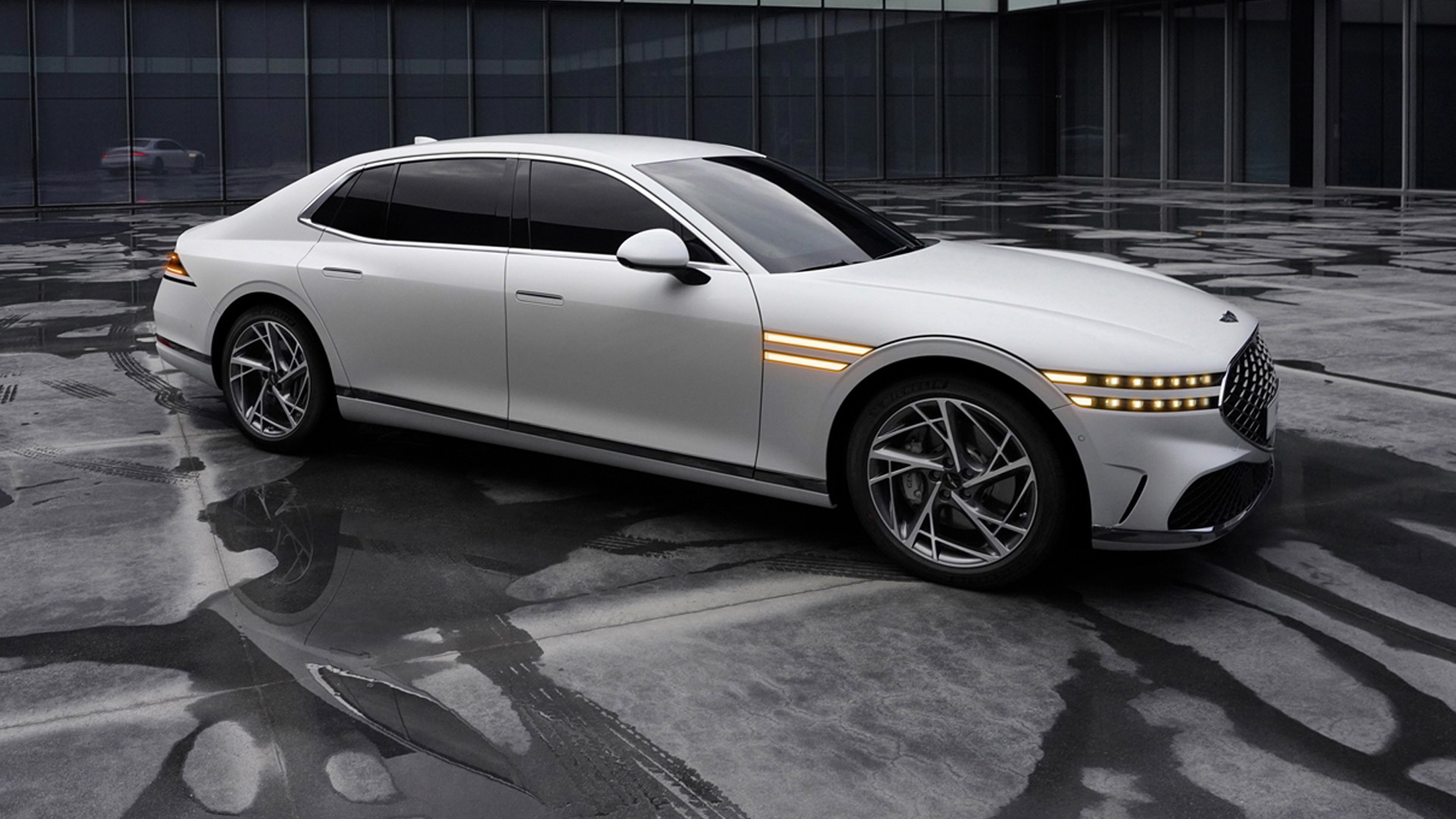 Genesis has a redesigned G90 headed to dealerships later this year as a 2023 model, and the full-size luxury sedan looks set to further narrow the gap with the dominant German players in this segment.

The styling is clearly an evolution of the outgoing model's lines, a car that you can't really describe as lacking in boldness. The new G90 maintains the same themes, like the large crest grille and twin-bar lights, but dials the refinement up a notch. There's also a delicious blend of curves and sharp lines, with the look first previewed by the Essentia concept rolled out in 2018, and more recently on the X Speedium Coupe concept rolled out earlier this month.

Finer details can be found in elements like the grille, where two mesh patterns are layered on top of one another to create a three-dimensional effect. The twin bars that make up the lights are also much thinner than before, and you'll also notice that a large clamshell hood extends all the way to the top of the front wheel arches. 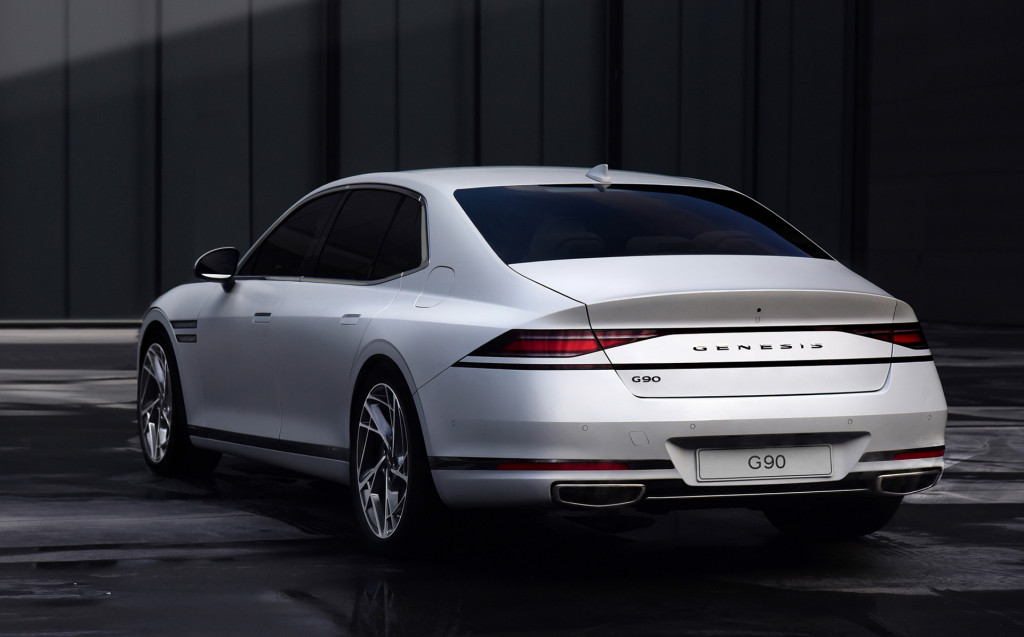 Moving to the side, the shape of the greenhouse is very different to the current model's design, with the side split into five individual windows instead of the current model's three. A similar design is found on the Lexus LS and was chosen to provide a more open feel for rear-seat passengers. And finally at the rear of the car, it almost looks like a Kammback tail is present.

The interior is markedly different to the one in the current G90. The design is even less cluttered and is marked by two wing-like elements that frame the digital instrument cluster and separate it from the infotainment screen. Two jewel-like dials are at the driver's reach in the center console, one for gear selection and the other for the infotainment. A pair of sunroofs, ambient lighting, and a fragrance dispenser can be used to set the tone in the cabin. A 23-speaker Bang & Olufsen audio system is also included.

In the rear of the cabin, the left and right seats have a reclining function. Each seat in the G90 also features 10 air cells on the seatback and two air cells on the cushion, supporting four modes of body massage, with occupants able to choose massage duration and strength. These air cells also help with bolstering when the car is in sport mode or traveling at highway speeds, and they automatically deflate on the side nearest the corresponding door when passengers are boarding and exiting the cabin. 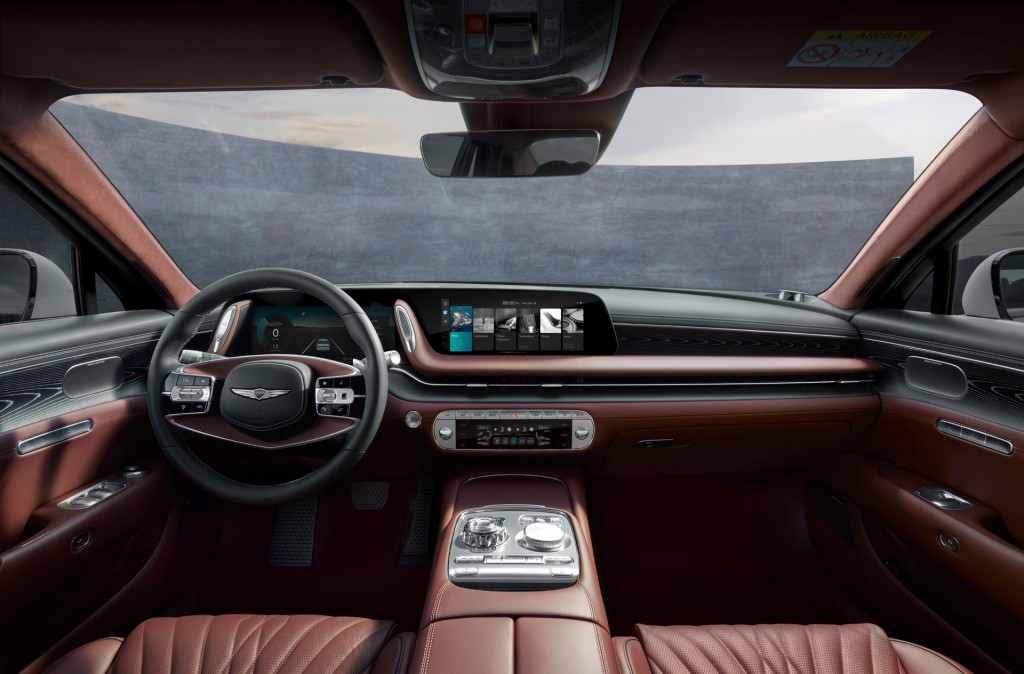 The redesigned G90 brings with it a new platform and possibly a battery-electric option. The platform is a stretched version of the Genesis-exclusive M3 architecture that debuted in the 2021 GV80 mid-size SUV and has since migrated to the mid-size G80 sedan and small GV70 crossover. The platform is designed for rear- and all-wheel-drive configurations, and also supports all-wheel steering, which features in the new G90.

Air suspension also features in the new G90. The system automatically lowers the vehicle to improve efficiency at high speeds, and can detect the road surface and raise the vehicle to protect the underbody when driving over rough or uneven surfaces. The system can also raise the front wheels when it detects a steep slope. This provides stronger suspension to prevent damage from contact between the flat road and the underbody after the slope.

A V-8 option isn't planned. Instead, buyers will have two V-6 options to choose from, both of them mated to an 8-speed automatic and all-wheel-drive system. There will be a regular 3.5-liter twin-turbocharged V-6 with 375 hp, and a more advanced version of this engine with a 48-volt mild-hybrid setup. The mild-hybrid setup will include an electric compressor designed to help deliver boost at low revs, before the turbochargers take over. EPA documents point to this powertrain coming with 420 hp, or the same as the old V-8. 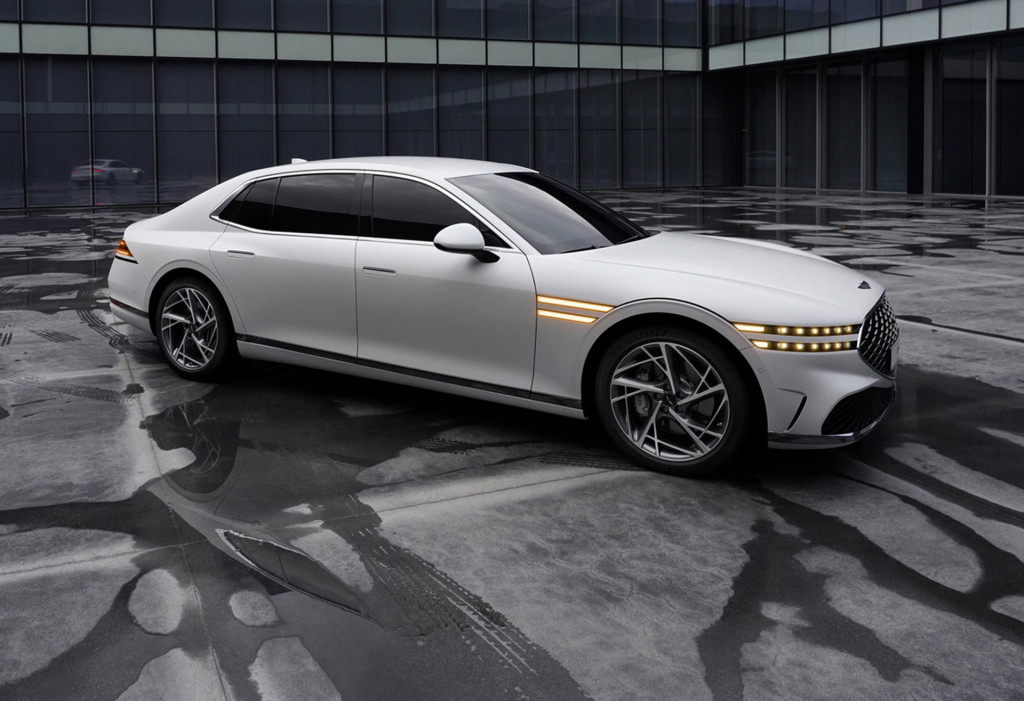 A long-wheelbase option will also be available for the G90 in some markets, though the U.S. isn't expected to be one of them.

Genesis USA spokesman Jarred Pellat told Motor Authority that the mild-hybrid powertrain will be available in the U.S., and that more details will be announced closer to the market launch.

For more on the Genesis G90, read the in-depth reviews at The Car Connection.