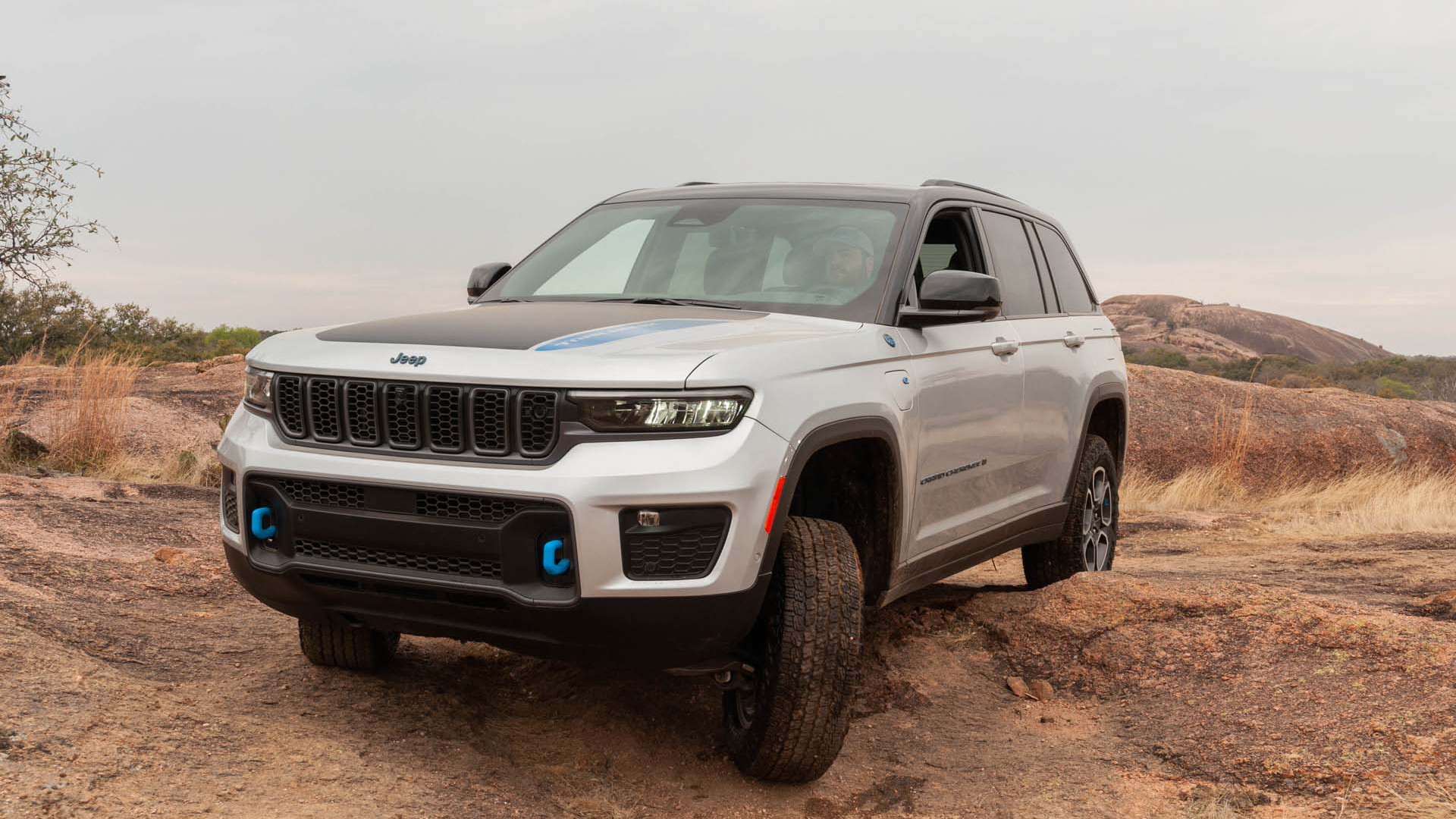 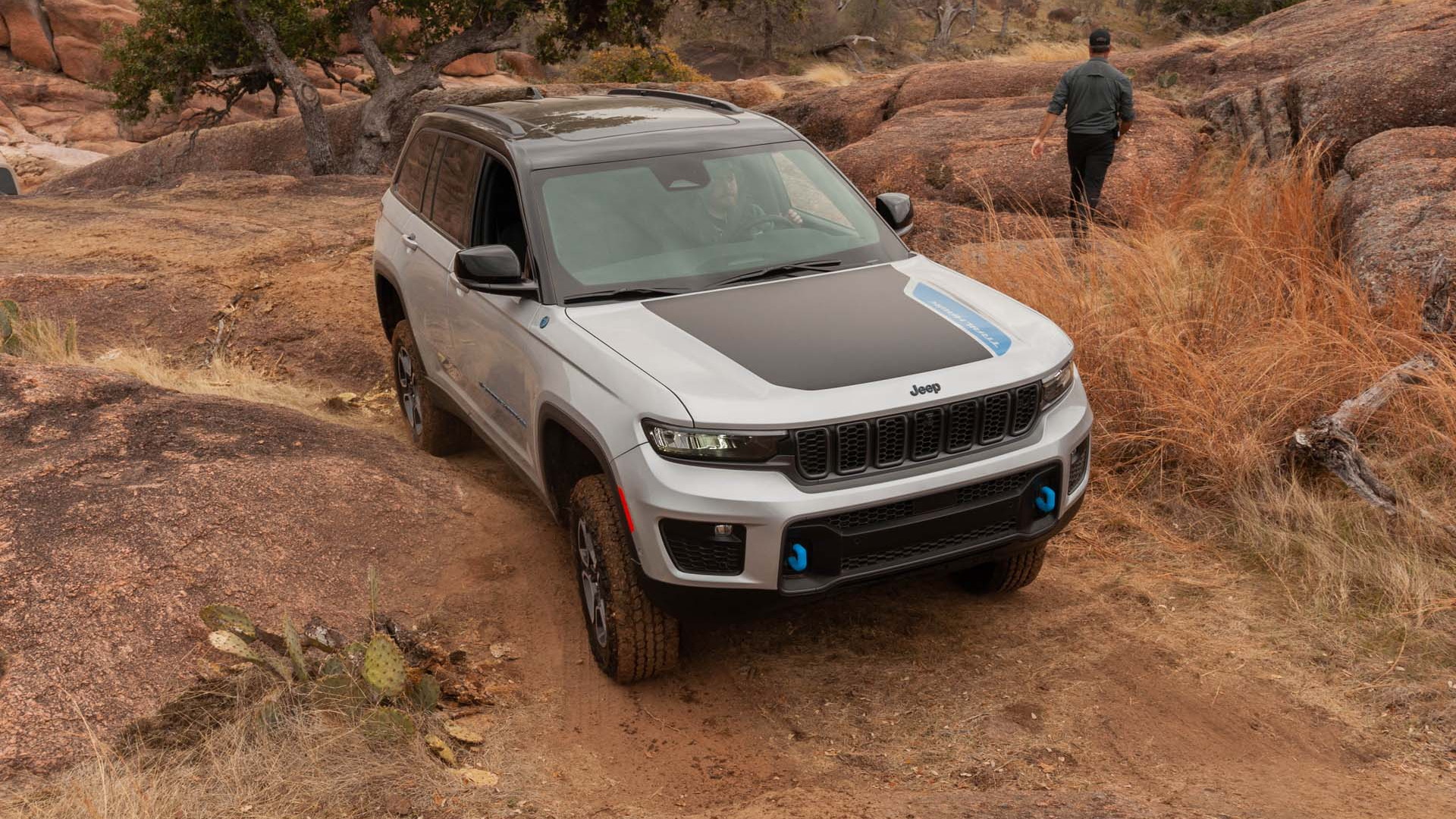 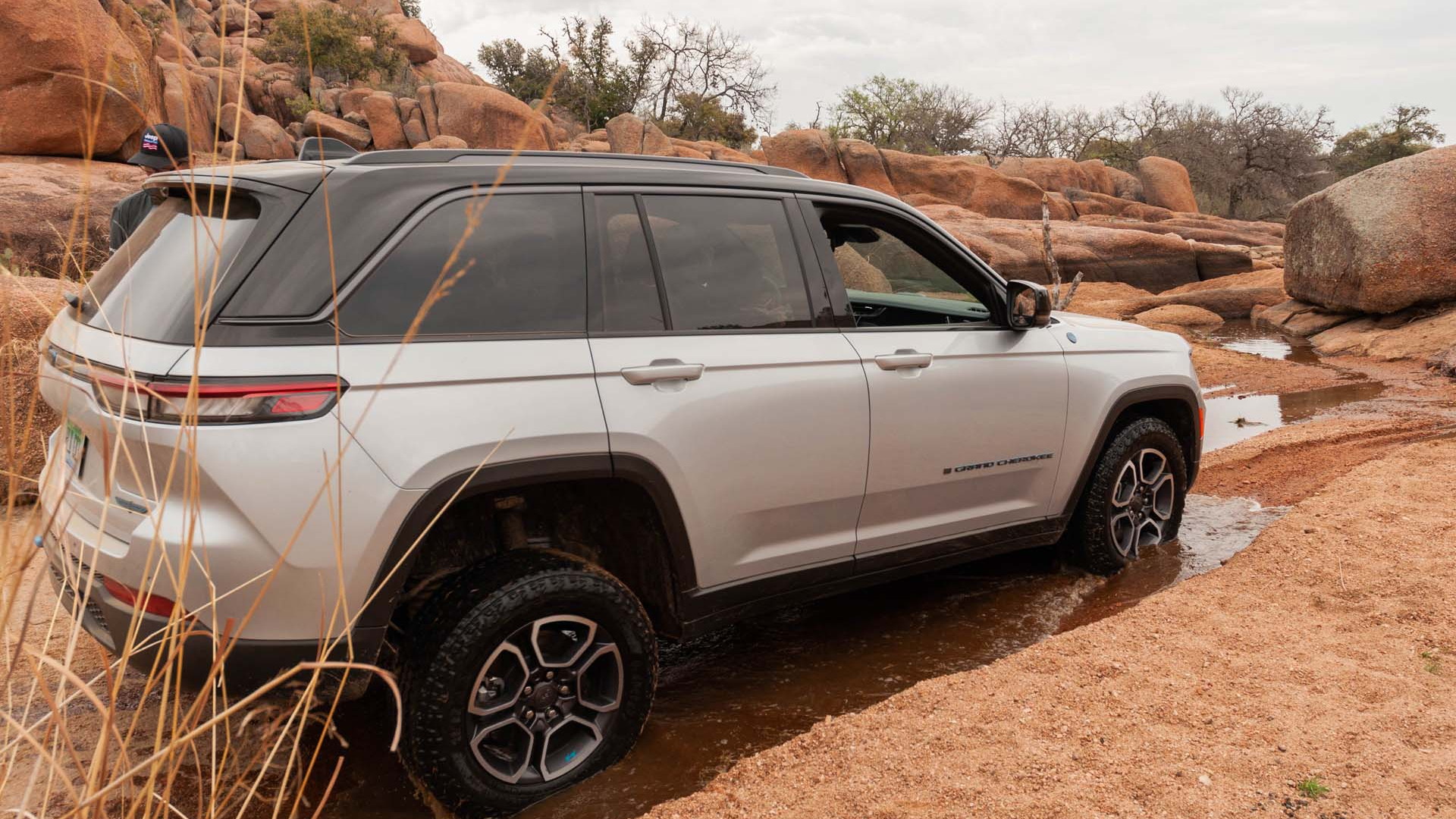 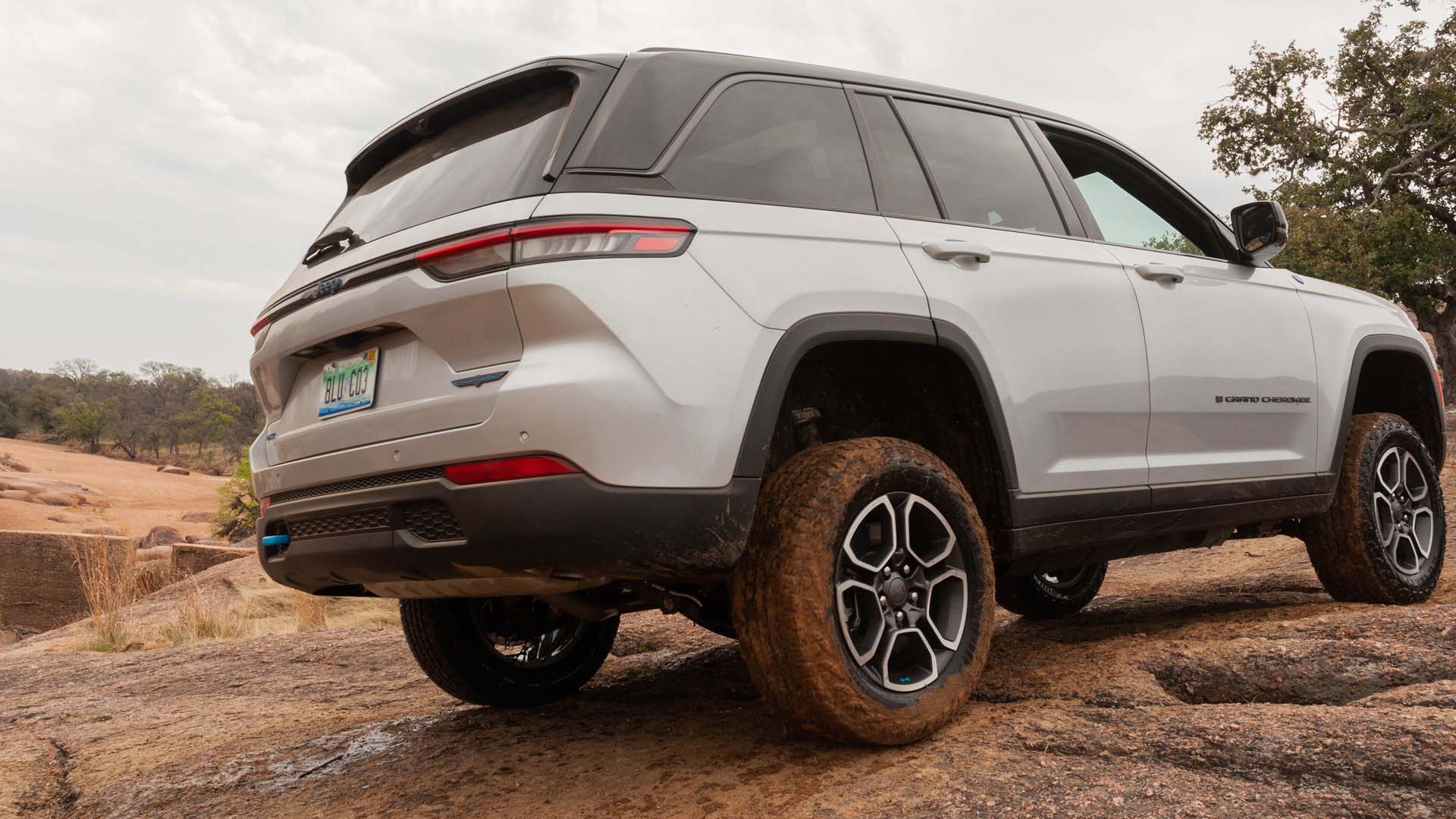 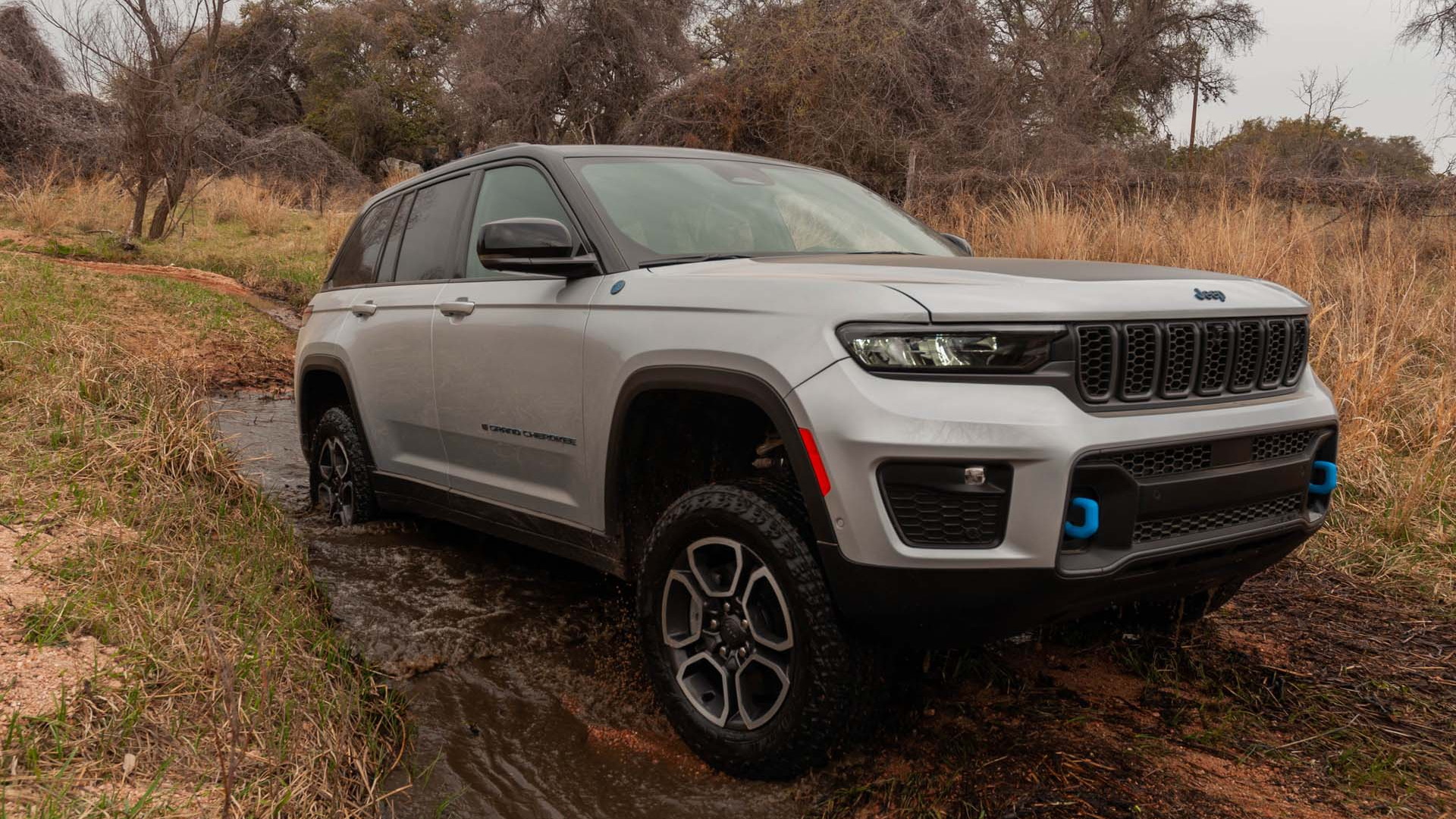 With the arrival of the fifth-generation Grand Cherokee comes a plug-in hybrid model with more power, and efficiency, than any other Grand Cherokee sold today. The new 4xe model achieves these things without sacrificing an ounce of capability or luxury. However, it comes at a price, which is at least $59,495 including the $1,795 destination fee.

Despite the price tag, the 4xe is the Grand Cherokee for many buyers, depending on the budget and use case. Here’s why.

The Grand Cherokee 4xe is powered by a 2.0-liter turbo-4 with 270 hp and 295 lb-ft of torque, paired with a 44-hp motor generator (which replaces the starter and connects to the crankshaft via a belt), and an electric motor with 134 hp and 198 lb-ft of torque in the 8-speed automatic transmission. Total system output is 375 hp and 470 lb-ft of torque, which are 18 hp and 80 lb-ft of torque more than the optional 5.7-liter V-8. That’s also more torque than Stellantis’s new turbocharged inline-6 in standard output form.

Those power ratings translate to increased performance. While the V-8-powered Grand Cherokee sprints from 0-60 mph in 6.9 seconds, the 4xe model cuts that 0-60 mph time down to 6.0 seconds.

Like in the Wrangler 4xe, from which the powertrain was lifted, drivers have a choice of three electrified driving modes: Hybrid, e-Save, and Electric. Hybrid optimizes engine and motor power for best fuel economy. E-Save locks out the battery to save the juice to be called upon later. Interestingly, it also allows the powertrain to, very slowly, at a rate of up to 3 kwh, recharge the battery, though it isn’t an efficient way to recharge the battery pack. Electric mode isn’t always electric as the gas engine will kick in under heavy throttle because the electric motor simply isn’t that powerful.

Jeep said the battery will take 12-14 hours to recharge on a Level 1 charger, and that drops to 3-4 hours on a Level 2 plug.

During my day of driving the 4xe over the course of about 200 miles I put the PHEV through its paces on- and off-road. In mixed driving starting off with a 99% state of charge, the 17.3-kwh battery provided just over 24 miles of electric range. Once exhausted, the overall fuel economy average over the course of 106 miles of mixed driving averaged out to 23.5 mpg, according to the trip computer’s calculations, both of which are in line with the EPA ratings. Things fell off during the last 100 miles of mostly highway driving. Starting off with no juice in the battery and driving the entire way back from the fields of Texas to the hotel in Austin in Hybrid mode, the 4xe’s powertrain only mustered an average of 18.5 mpg, according to the trip computer. The V-8 (and V-6) might’ve done better in that scenario. Turbos spooling drinks gas.

Pulling out of the parking lot of downtown our Austin hotel in Electric mode, the 4xe moved silently with little regenerative braking much like a gas-powered Grand Cherokewe would. But, I pushed the button to turn on Max Regeneration, which Jeep representatives said is supposed to be like a one-pedal mode in an EV. No cigar.

Approaching the first stop sign a block down the road, the Grand Cherokee didn’t come to a complete stop with regenerative braking alone, even with Max Regeneration mode on. At highway speeds the regen is weak, picking up progressively at speeds below 40 with maximum regen coming online at just over 30 mph. The 4xe will crawl forward at a stop if your foot isn’t on the brake pedal. Max Regeneration will stay on upon restarting the vehicle and there’s little reason, or benefit, to turn it off.

Once the battery is depleted the Grand Cherokee cycles into operating like every other hybrid on the road. The blend of power from the turbo-4 to electricity is seamless, as are the 8-speed automatic transmission’s shifts.

When called upon for instant power for merging, passing, or an emergency maneuver, the entire powertrain takes a beat. It’s a double beat if the gas engine was asleep and the Grand Cherokee was moving under electric power only. The V-8’s point-and-shoot nature when moving within traffic simply isn’t here. It can be hard to get used to the second or so it takes for the powertrain to wake up and provide full power.

When driving off-road, the instant torque from the electric motor is nice. But, the way Jeep has tuned the power to come on so quickly removes the ability to easily modulate it in certain situations. Specifically, the issue presents itself when trying to climb a rock face or roll over a boulder. Even in the terrain management system’s Rock mode, power delivery has the on-and-off feel of a light switch. Max Regeneration mode makes power delivery a little more linear, but it’s still hard to manage the power in crawling situations.

Jeep rates the 4xe at 6,000 lb of towing capacity, which is 200 lb less than the V-6 and 1,200 lb less than the V-8. While I strongly advise against towing a max load as it leaves no margin for error, that’s exactly what Jeep had us do. With nearly 6,000 lb of trailer and classic Jeep mail truck hooked to the rear of the 4xe and the battery depleted, the Jeep pulled away silently from a stop and had no issue getting up to speed thanks to the electric motor’s instant torque in Hybrid mode. In my extremely limited test on a gravel road, I didn’t crest 40 mph, so the exercise provided only a glimpse of what this plug-in is capable of with a trailer behind it—perhaps for a reason. Even at 40 mph, turbo whine was audible as it spooled at revs above 3,000 rpm much of the time. We look forward to further testing the 4xe’s towing capabilities in the future.

Could be a value

At $59,495, there are less expensive Grand Cherokees than the 4xe. However, the base 4xe starts as a Limited model with quite a few options stacked on as standard, including a 10.1-inch touchscreen infotainment system, a panoramic sunroof, and a 10.0-inch touchscreen infotainment system for the front passenger. A similarly optioned Limited model is $6,655 less expensive before factoring in the available $7,500 federal tax credit. That tax credit could make the base 4xe less expensive than a comparably equipped Limited model. The price differential shrinks slightly on the mid-trim models and grows slightly for the top-shelf Summit Reserve model. Your value proposition may vary.

Even with brief testing, it’s hard to recommend the 4xe for those who will use the Grand Cherokee as their main tow vehicle, though it can do the deed. For those able to take advantage of the full federal tax credit, it makes better financial sense to opt for the more expensive powertrain from day one. Either way, it’s clear that the plug-in hybrid Grand Cherokee 4xe doesn’t lose an ounce of off-road capability while providing more power and efficiency in day-to-day driving.

Jeep paid for airfare, hotel, and meals so Motor Authority could drive to the middle of nowhere Texas and bring you this first-hand report.