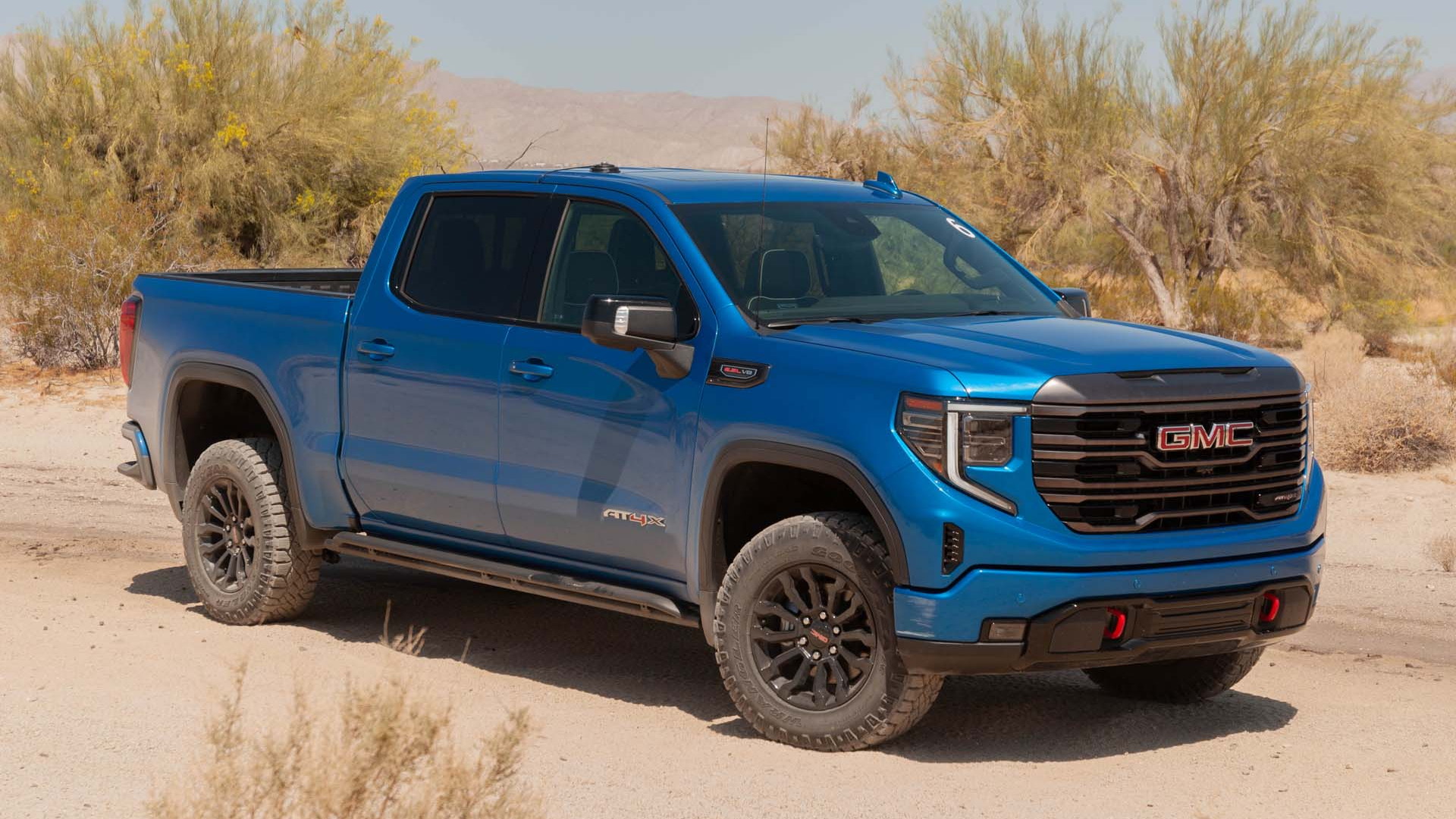 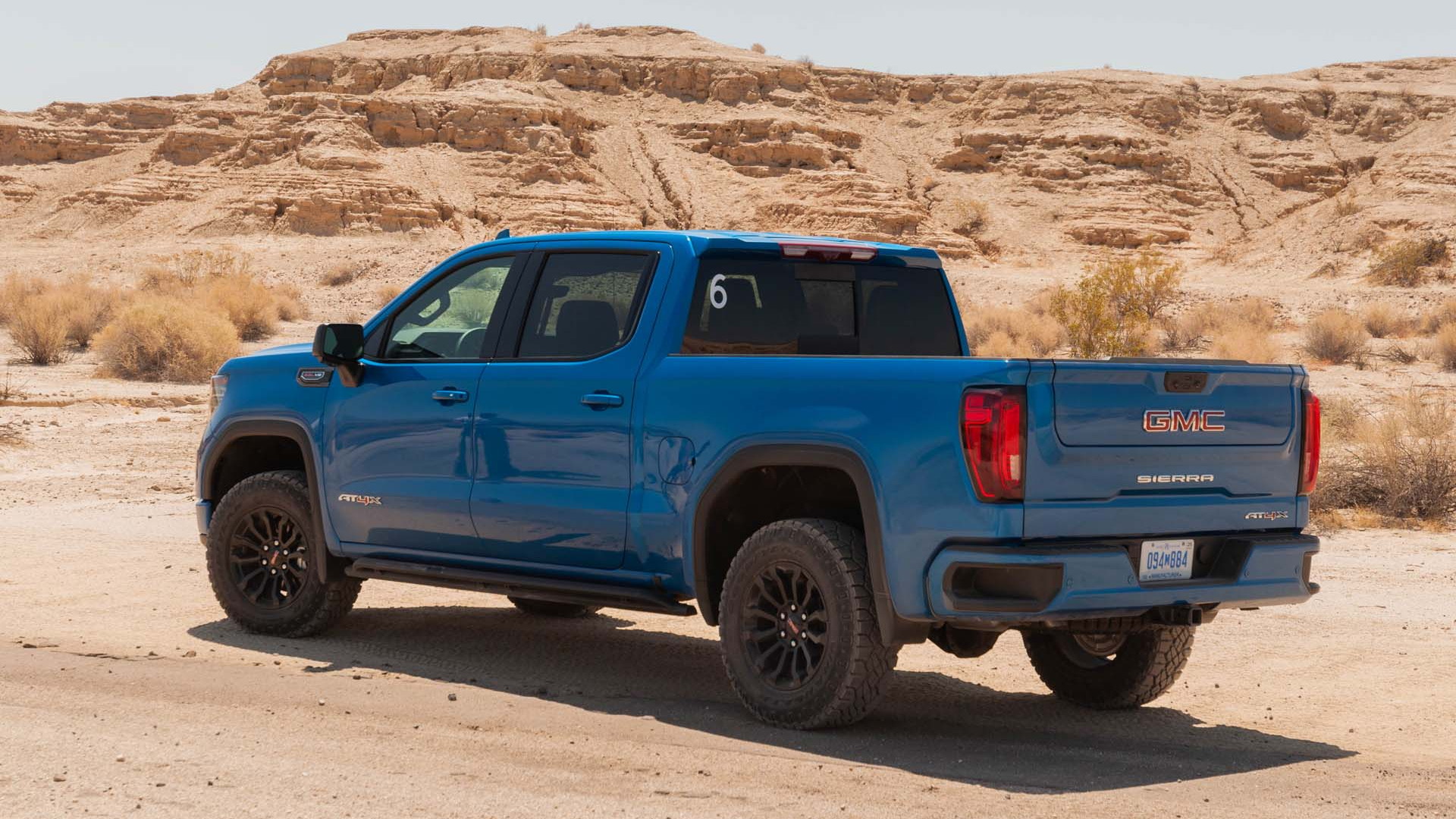 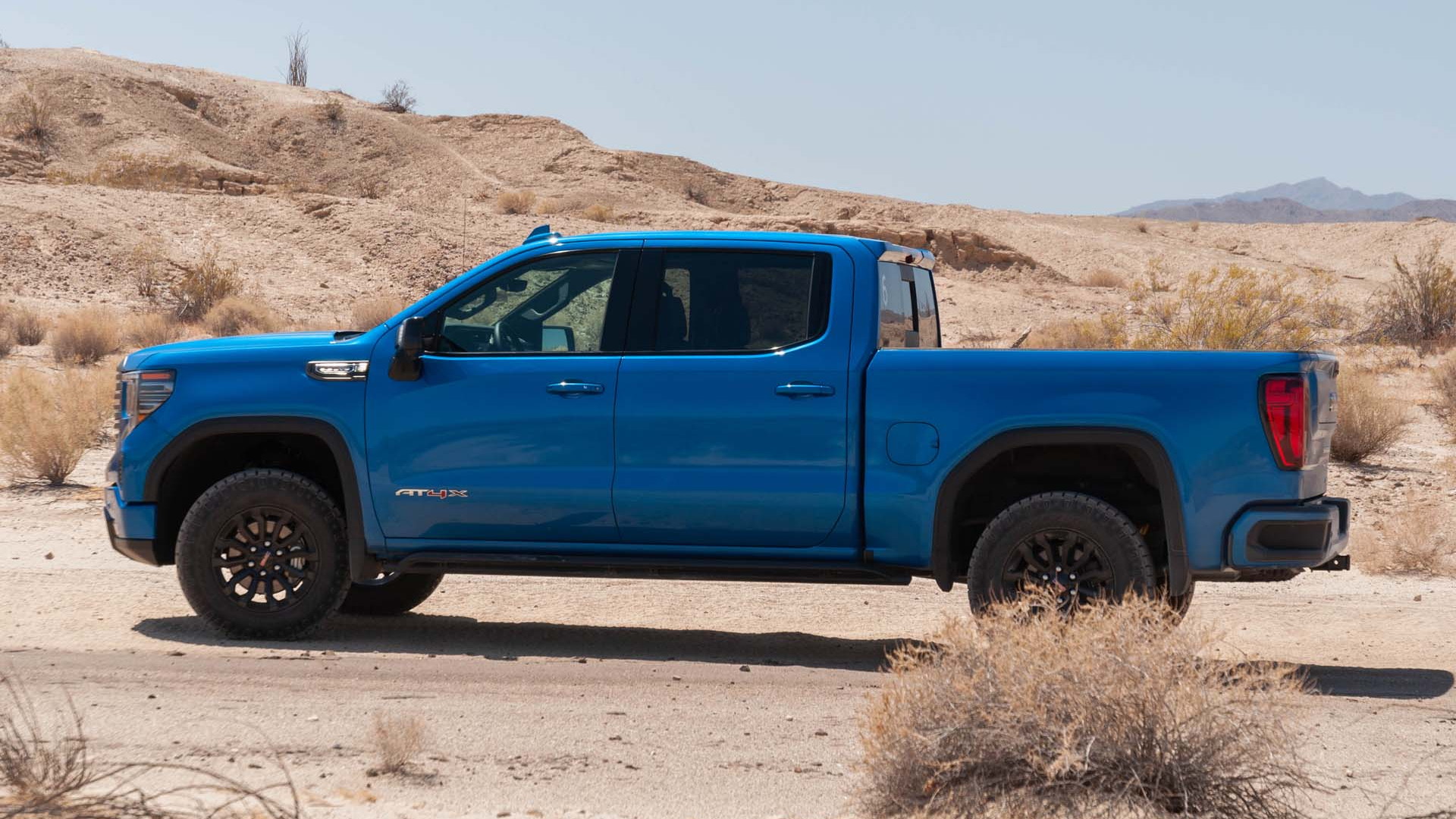 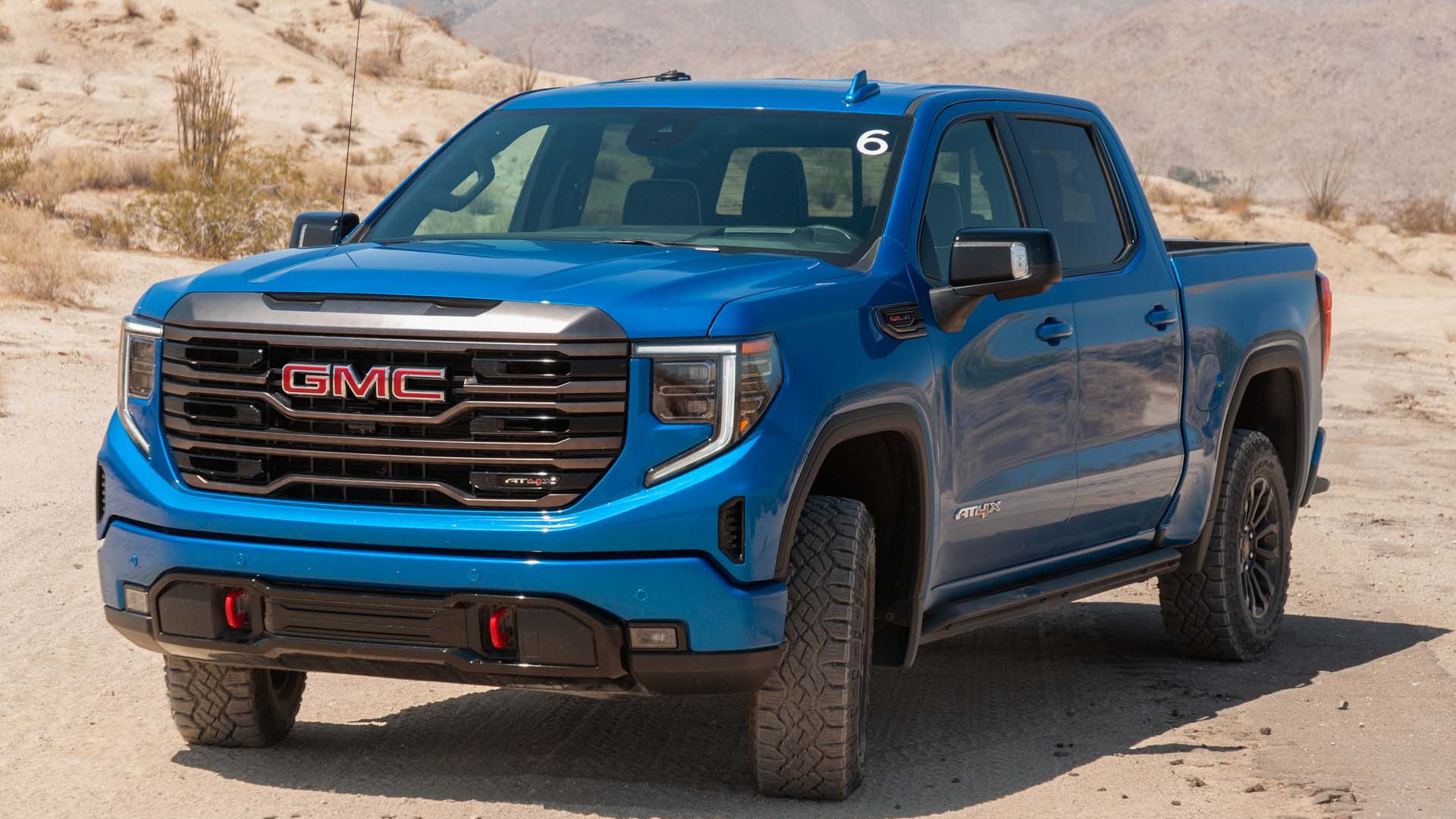 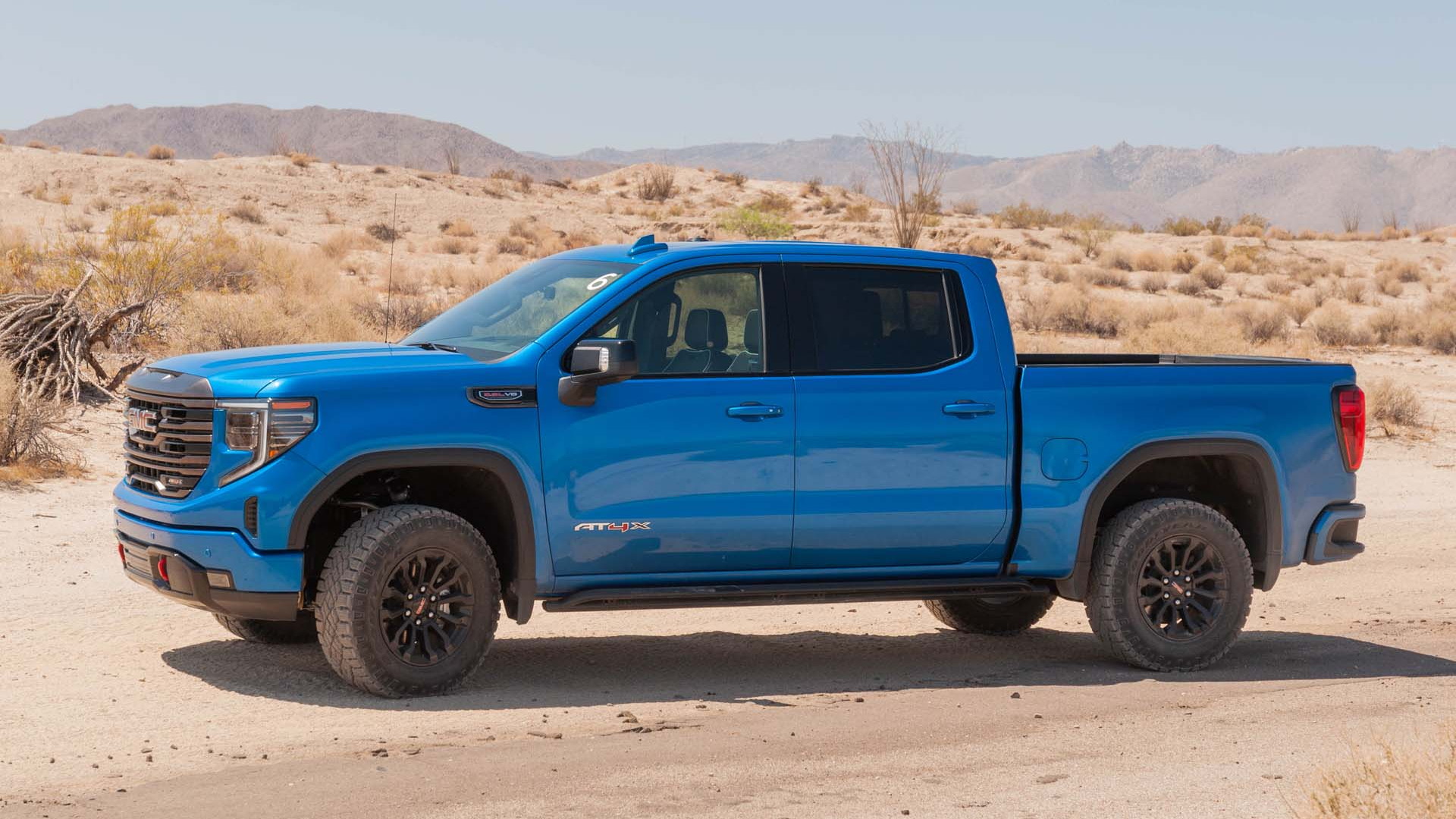 That sound you just heard was the average transaction price going up on the highest-end GMC Sierras.

The 2022 GMC Sierra 1500 lineup has been refreshed with a better, finally competitive, interior and two new expensive additions to the lineup: the lux Denali Ultimate and off-road focused AT4X. The latter cribs some, but not all, the bits from the 2022 Chevrolet Silverado 1500 ZR2’s parts bin.

Arriving at dealers now the 2022 GMC Sierra 1500 AT4X costs $77,395 including the $1,695 destination charge that feels like a cash grab. The Denali Ultimate breaks new ground with an $82,795 sticker price. While the AT4X is a capable off-roader, whether it’s right for you will depend on some priorities.

The Multimatic DSSV position-sensitive dampers first seen on the smaller Colorado ZR2 do duty under the GMC AT4X. The dampers on the GMC are the exact same as those on the Chevy Silverado ZR2, right down to the tuning. For application in the larger, heavier trucks, the shocks use upgraded seals and larger, longer 40-mm pistons.

Front and rear locking differentials mark the other ingredient in the secret sauce for these large GM twins that the competition lacks.

But the AT4X rides on the same 275/65R18 Goodyear Duratrac all-terrain tires as the Sierra 1500 AT4 (and Chevrolet Silverado 1500 Trail Boss). These tires are smaller 32s, not the larger 33-inch Goodyear Territory Mud Terrains the Silverado 1500 ZR2 runs. GMC had to go with them because the AT4X uses the AT4’s front bumper rather than the three-piece steel ZR2 bumper, which has side cutouts and removable end caps. The larger tires will not fit without rubbing at full lock. Forget running 35s.

The AT4X also lacks the Silverado ZR2’s underbody protection that covers everything from the front bumper to the front differential. The AT4X has a skid plate for the transfer case, but that’s not full under body protection.

The AT4X has 11.1 inches of ground clearance compared to the Silverado ZR2’s 11.2 inches. The AT4X matches the ZR2’s 9.8 inches of front and 10.6 inches of rear suspension travel, along with the Chevy’s 23-degree departure and 23.4-degree breakover angles. But the AT4X’s max approach angle is only 25.5 degrees compared to the ZR2’s 31.8 degrees. That's worse than the Ford F-150 Tremor’s approach angle of 27.6 degrees, though it will still get you up and down most off-road hills and berms.

Every AT4X is powered by GM’s 6.2-liter V-8 with 420 hp and 460 lb-ft of torque hooked to a 10-speed automatic transmission. No turbodiesel engine option is available, which would have been a great differentiator between the GMC and Chevy.

The V-8 is strong and its deep guttural exhaust note sounds better than the twin-turbo V-6 in the Ford F-150 Raptor, despite a better, more substantial sound for the latest version. The engine’s punch slings the AT4X on its all-terrain tires from 0-60 mph in the 5.5-6.0 second range, according to my butt dyno. Power is never in short supply.

On pavement, the Multimatic shocks make the AT4X the best riding Sierra money can buy. But the GMC doesn’t ride as softly as the Silverado ZR2 because its smaller rubber has less sidewall to cushion blows. I’m not a fan of the Duratrac tires (especially on broken Midwest pavement), because they produce noticeably louder thrum than the tighter spaced, smaller tread blocks on the ZR2’s Territory Mud Terrains.

My AT4X drive included an off-road run on the sand and silt leading to Diablo Drop Off in California’s Borrego Desert State Park. This is where the Multimatics really showed off their capability, doing a commendable job keeping the suspension from jostling my insides.

The front and rear lockers, which engage at the click of a dash-mounted button, make the AT4X capable of clambering up and down off-road obstacles with ease. Competitors could make it up and down the obstacles we tackled, but it would have required more effort on my part and their tires would have dug deeper into the earth due to the lack of a front locker.

However, with the AT4’s front bumper instead of the Silverado ZR2’s and the less capable approach angle that comes with it, I had to make sure to go slower when approaching larger obstacles or undulations to avoid crunching the bumper.

The ZR2’s Terrain mode combines with the four-wheel-drive system’s low-range gearing and either first or second gear to offer one-pedal driving capability. When engaged, the driver can control the speed with just the accelerator pedal similar to one-pedal driving in an electric car. This comes in handy when it’s important to concentrate on what line to take in a tricky off-road situation.

Like the ZR2, the AT4X retains the standard Sierra 1500’s body work, which means it’s not nearly as wide as the Ford Raptor or Ram TRX. It makes narrow trails or rock passages less harrowing. Our off-road path had at least one tight section that a Raptor or TRX wouldn’t have been able to get through due to their width. Sometimes bigger isn’t better.

A cut above the ZR2’s cabin

Inside, the Sierra 1500 lineup benefits from the same interior enhancements as the Silverado 1500 lineup. SLE and above models feature a 13.4-inch touchscreen infotainment system with wireless Apple CarPlay and Android Auto, a 12.3-inch digital gauge cluster, and a console-mounted electronic gear selector.

The AT4X model sits in this weird middle ground between the upscale Denali and the downright luxurious Denali Ultimate. GMC wraps the dashboard topper in leather, covers the seats in full-grain leather, applies soft-touch materials to most surfaces occupants are likely to touch, and adds red cross stitching to the door-mounted armrests.

But GMC also throws a dozen different finishes into the cabin. The roofliner is suede while the sunroof cover is a cloth material that doesn’t match. A few pieces of trim in my tester wiggled easily, and I inadvertently pulled a trim panel off the dashboard. Don’t worry, GMC, I snapped it back into place, but it didn’t inspire confidence and it certainly diminished the premium experience.

The interior, both in terms of materials and design, sits a cut above the ZR2. The touchscreen is better integrated, the 15.0-inch head-up display is huge compared to the 13.4-inch version in the ZR2, and the 16-way massaging front seats help pamper passengers. But the seat bottoms are a smidge short for best thigh support, and the interior isn’t as easy to wipe down after a day of off-roading due to the better materials (it got dusty in the desert). The Ram 1500’s interior materials are still a full cut above for less money.

Does this make sense?

No, it doesn’t when compared to off-road-oriented rivals.

At $77,395 the Sierra 1500 AT4X costs about $8,000 more than a Silveardo 1500 ZR2 but has less off-road capability and underbody protection. GMC makes up for that with better interior materials, a larger head-up display, and massaging front seats. It’s also slightly less comfortable, and louder, thanks to the tires.

The AT4X costs the same as a similarly equipped F-150 Raptor (and $8,000 more than a base Raptor), which is far more capable, comfortable, and has a premium engine with more power than the standard-line models. While the Raptor’s width can pose livability and off-road challenges, it also gives the truck more presence.

It’s worth noting that when the AT4X was announced in October the pricing was originally set to be $74,995, but as with all things in life, this truck is now more expensive as it rolls into dealerships.

GMC aims the AT4X at buyers looking for a more capable and comfortable AT4. It’s the most comfortable Sierra 1500, but more capability can be had for less money.

GMC paid for airfare and lodging so Motor Authority could get sunburned and bring you this first-hand report.