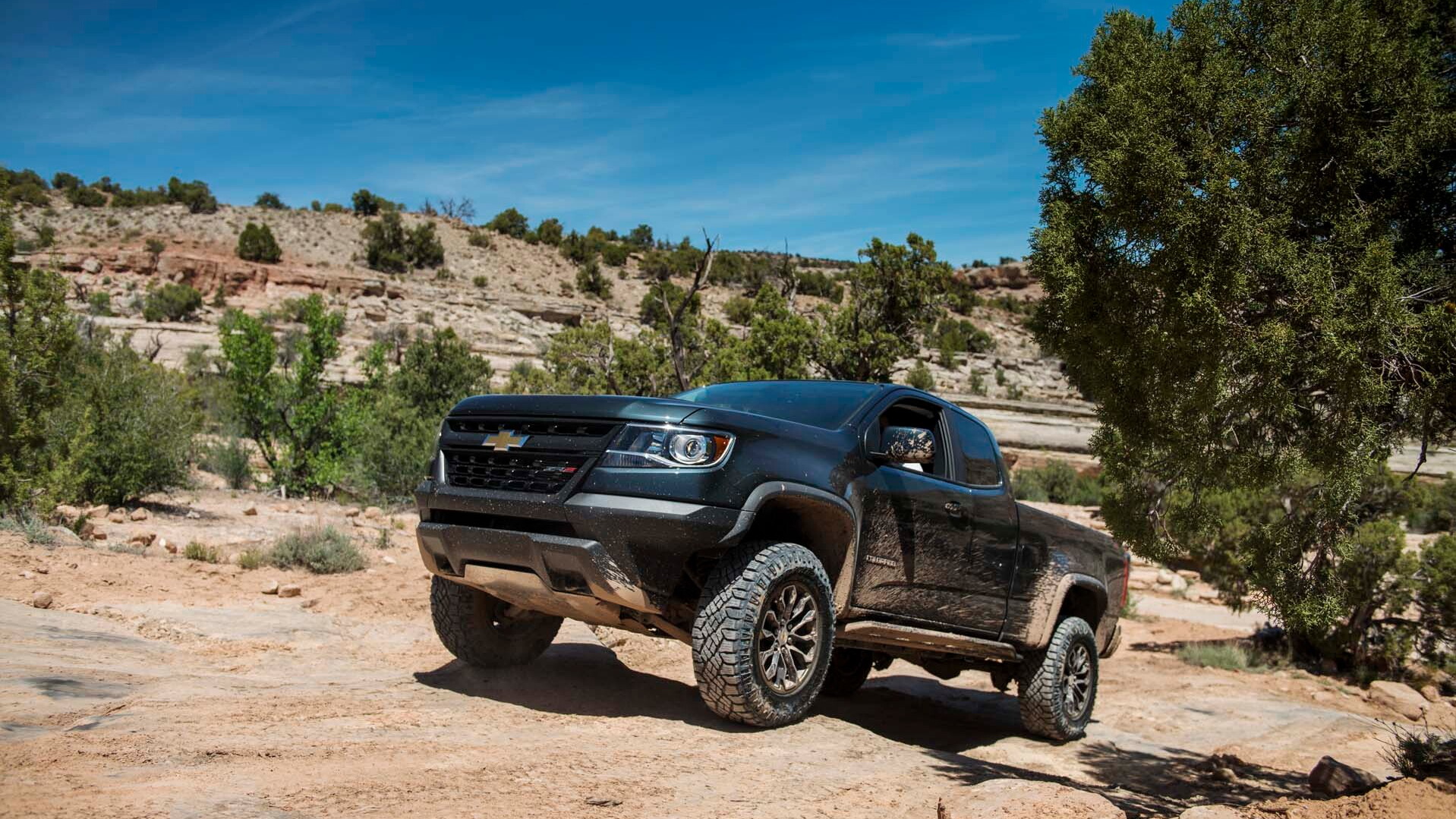 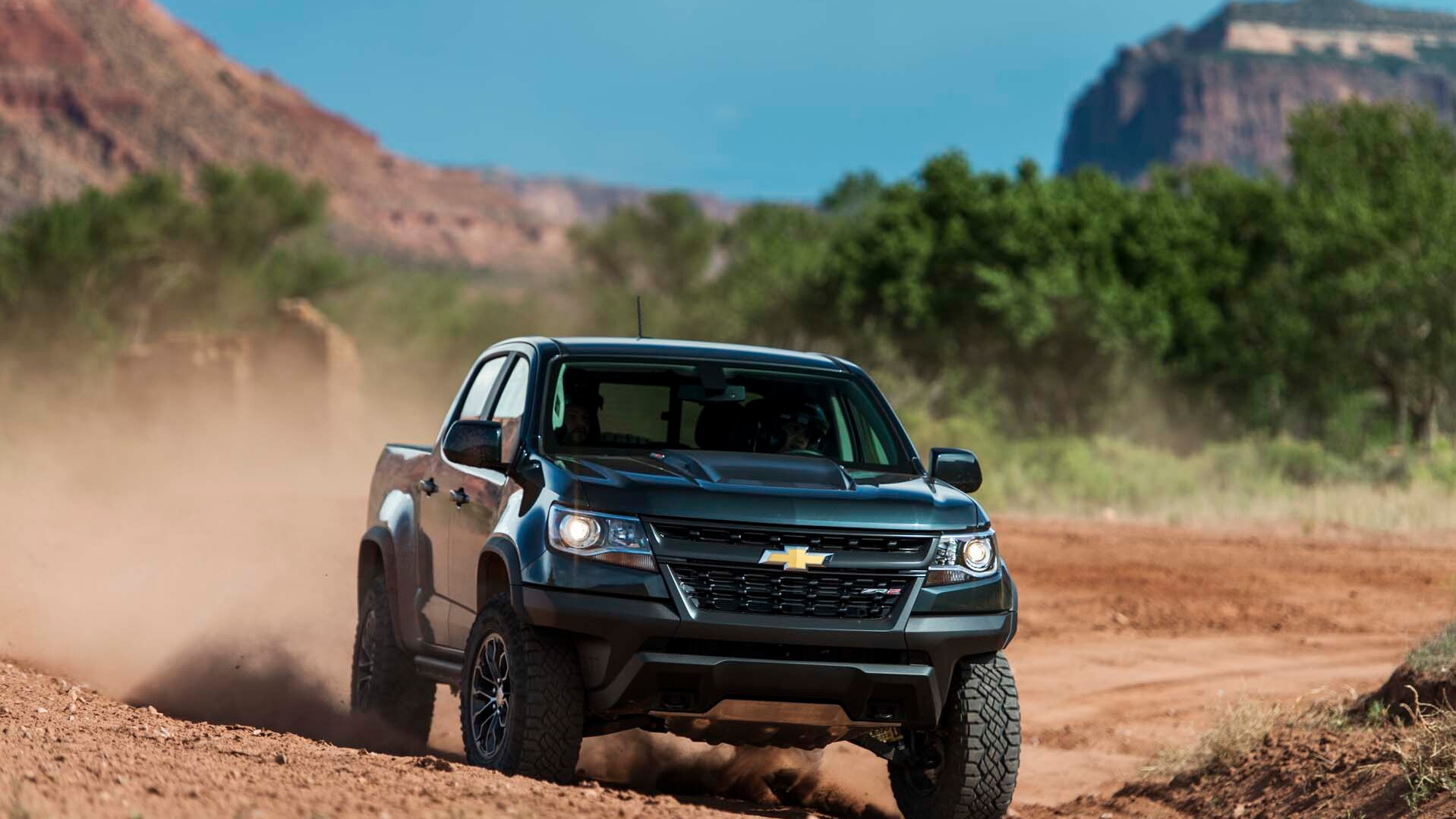 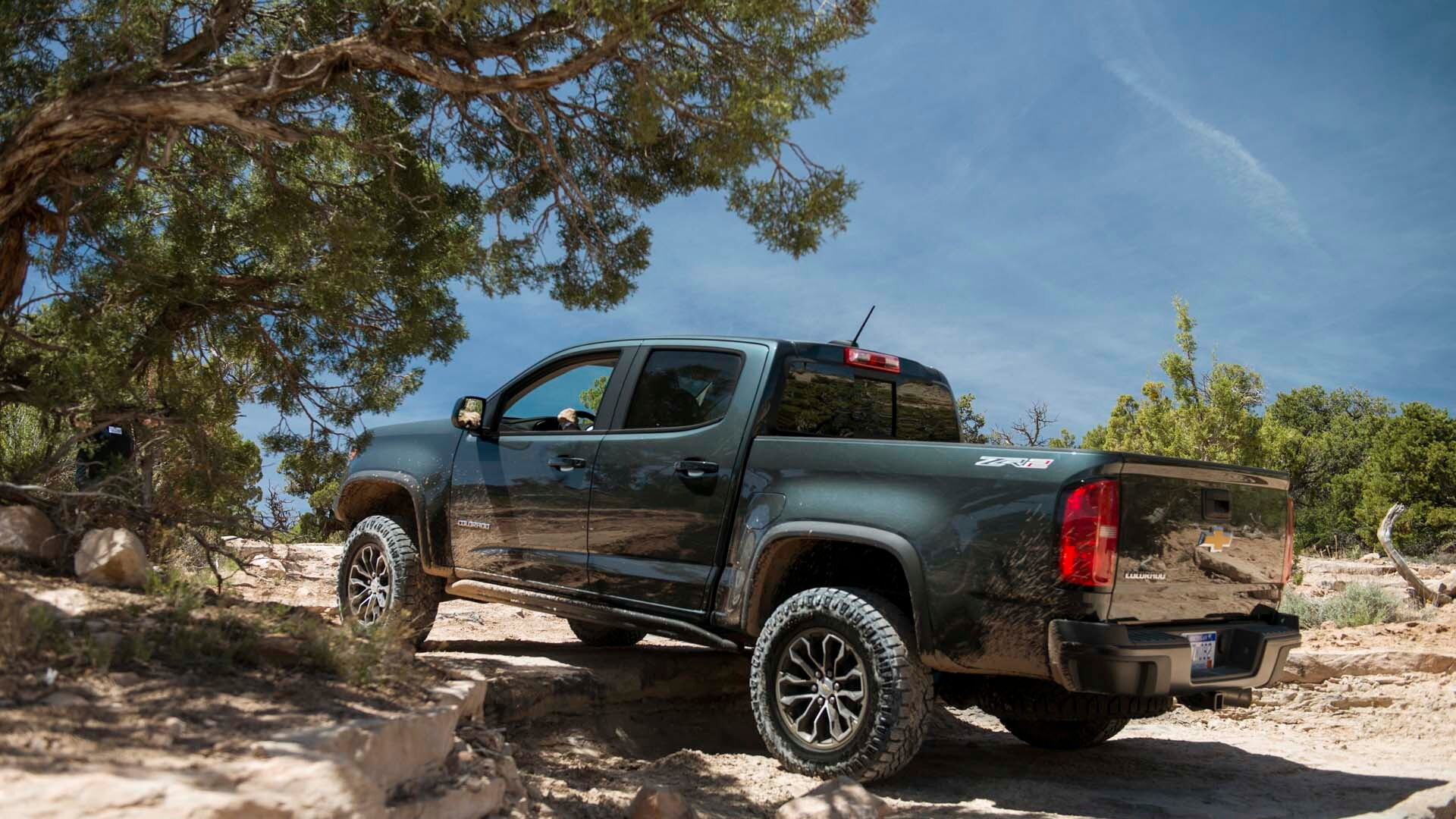 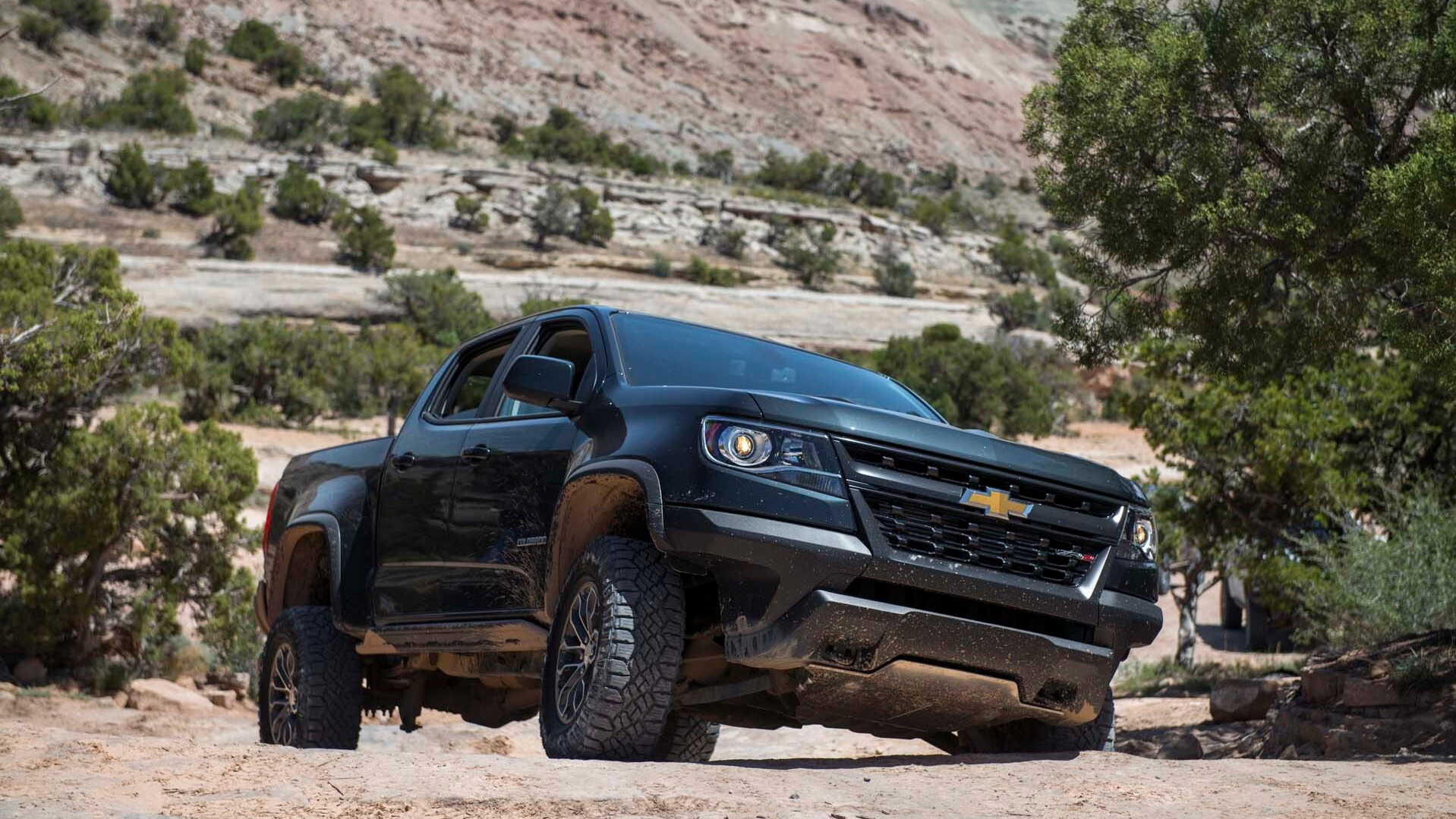 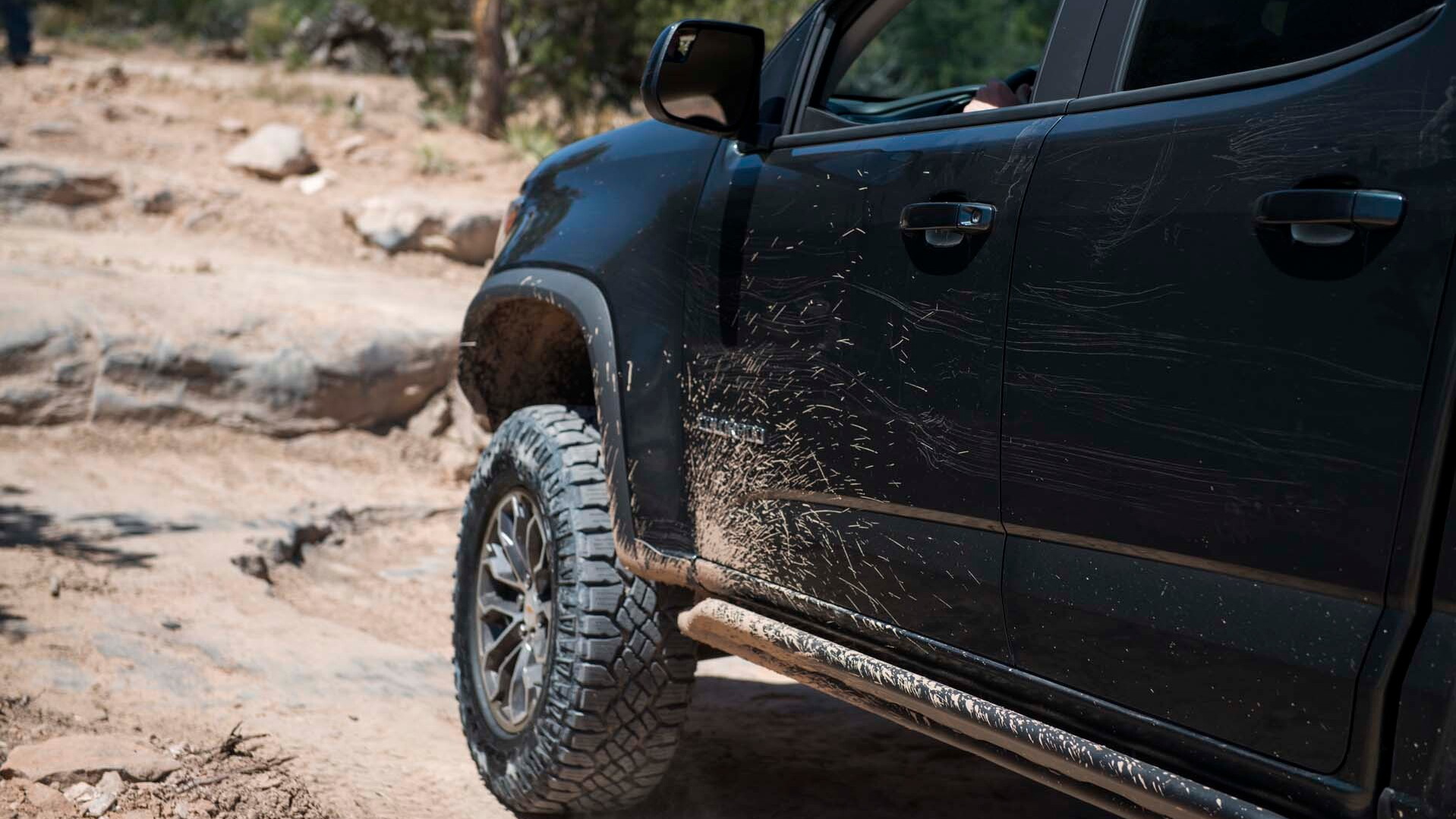 There’s no substitute for the right tool. How do I know that? Decades of hammering nails with a meat tenderizer. Don't ask.

Off-roading requires the right tool, and Chevy owners have waited a long time for that equipment to show up in their Snap-On chests. Fast-rewind to the 2015 LA auto show, when the Chevy Colorado ZR2 clambered on to the stage.

Smaller than a Silverado, hardcore where it needed to be, the ZR2 promised the perfect skill set for carving paths where none existed. Now it's a real thing, and we've done things with it we wouldn't dare do with a normal Colorado, or a Silverado. Some things we won't even name.

We can talk about how the Colorado ZR2 is the best GM off-road tool since the Hummer nameplate disappeared on everything except cologne bottles. (Really.)

The 2017 Chevrolet Colorado ZR2 is fashioned like a Sunday suit with the sleeves torn off.

Its interior is straight out of the standard Colorado Z71, with only a pair of “ZR2”-festooned kickplates to stroke buyers and passengers for shelling at least $41,000 for the truck. The cabin is awash in gray plastic, with a yellow Chevrolet badge the only island of color in a monochromatic sea.

You could summarize the interior in a word: it’s boring. I’ll add another word: refreshing.

The ZR2 skips bright badging or “hardcore” appearances for a stock approach, something dealers will likely be eager to rectify for a price. Personally, looking like a baboon’s ass—inside and out—on the trail doesn’t do much for grip, at least in my eyes.

But the ZR2 finally fills in the strip of button blanks in the lower center stack for the Colorado. Front- and rear-locking differentials are standard on the ZR2 and activated quickly by my right hand. Near those switches a strip of toggles in ascending order of bad decisions: hill-descent control enable, traction and stability control disable, and emergency hazard when you’re inevitably upside down.

Those built-in lockers and traction programs should underscore the second-biggest attraction for the ZR2, which are a package of baked-in off-road features that the Colorado has sorely lacked. Development for the ZR2 started only two years ago, but the truck came together in only a year. Even with that short of a window, nothing feels like an afterthought.

That permeates into the ride, which is surprisingly quiet and comfortable regardless of terrain. The stock 31-inch Goodyear Wrangler tires on 17-inch wheels were picked for their off-road traction, but also their quiet ride at cruising speed.

At highway speeds, the ZR2 is almost unbelievably quiet—anathema to the typical off-road experience of shouting at passengers on the way to the trail, shouting at everyone on the trail, and shouting over the ringing in your ears at home. The ZR2 conquers all it sees in almost complete silence, like a bunker buster delivered in an acoustic shadow. We live in exciting times, people.

But the tires are the only outward appearance of the witchcraft at all four corners. The ZR2’s best—and only—trick is its custom-built off-road dampers.

Multimatic seems eager to make a name for itself (they help build a car you may have heard of recently) by building improbable appliances such as the quartet of shocks found on the ZR2’s corners.

The Dynamic Suspensions Spool Valves damper with Position Sensitive Damping built by Multimatic and planted on the ZR2 are a mouthful to pronounce. The alphabet soup of initialisms should be further distilled down to two-stage damping. It’s intelligent, and fantastic.

The first stage, where compression and rebound swing less than the White Sox, the ZR2 improbably acts like a completely normal truck. The Goodyear tires’ tall sidewalls are predictably relaxed—almost nauseating—and nearly overshadows the heroically compliant suspension in everyday drives. Taking the ZR2 more than 100 miles to the trailhead wouldn’t be a big ask. Yup, it’s that comfortable.

On more jarring excursions, the shocks press into a different duty to dampen at different rates during high-impact compression cycles. The magic is found in spool valves that force hydraulic oil in and out of sleeves within the pistons at a specified rate. Two spool valves in the middle of the dampers control on-road behavior, a third spool valve toward the bottom of the shock handles more extreme events. Each are configured for the best behavior under load, and to dissipate heat better than traditional steel shims. The dampers are filled with nitrogen for even better temperature control.

What comes through the cab is extraordinarily dull—or great—depending on how you feel about engineering.

At highway speeds, the ZR2 is quiet and relaxed. Ask anyone who’s been in an off-road pickup recently and they’ll compare the ride to straddling a paint shaker for the afternoon.

The ZR2 skips the harsh ride for a relaxed atmosphere that’s unafraid of open soda cans in the cupholders or tooth fillings in my mouth. Complemented by the Colorado’s excellent electronic power steering rack—so good that they’ve exported it to worldwide trucks made in Brazil and Thailand—and the ZR2 begs for a road trip to Moab, Utah by way of Detroit and Seattle. Who’s afraid of 26 hours in a truck?

Off road, the ZR2 trades that relaxed feeling for precision under duress. In each of our rides through Grand Junction’s back roads and earthen steps, the Colorado ZR2 took punishment and asked for more.

Most of the ZR2’s best features work away in shocking silence.

The steering and tires are symphonic in their quietly blended excellence. The 3.6-liter V-6 and 8-speed automatic hum in quiet confidence that 308 horsepower provides. Opt for the 2.8-liter turbodiesel and its 279 pound-feet of twist, and its replaced by low-frequency clatter and smoother torque that begs for slow-speed maneuvering.

The ZR2’s quiet confidence inevitably brings attention back to the things you can see, of which, some could use work.

Gas- and diesel-powered versions are setup nearly the same, with only subtle differences in the suspension tuning to mitigate the extra load of a cast-iron lump up front and exhaust treatment in the back. Almost backward, the V-6-equipped Colorado ZR2 feels a little more nervous on the throttle and on the trail. In sand, with all the nanny controls kicked out the window, the V-6 powers and rips through the sand. On the slick rock, the V-6 jumps eagerly up the rocks and necessitates a two-foot driving approach unless you’re willing to smash up a few skid plates.

Nestled in the Colorado’s 4-wheel-select knob is the “Off-road” mode that only the ZR2 provides, which speeds up the throttle response, slows down the gear changes, and changes the traction control settings. On its own, it makes the ZR2 even more eager to throttle up the trail, maybe almost too much. Its best use is on the sand where, when engaged and traction and stability control disengaged, the ZR2 becomes one of the best baja trucks I’ve driven this year.

(Yes, even including that other, bigger guy with a blue oval in its teeth.)

But perhaps the ZR2’s best attribute is the one you almost instantly forget about: its size.

The Colorado ZR2’s smaller size and brilliant suspension meant that on narrow, windy, dusty trails—or getting lost in the red rock brilliance of the American Southwest, it was the best tool for the job. I know that now.