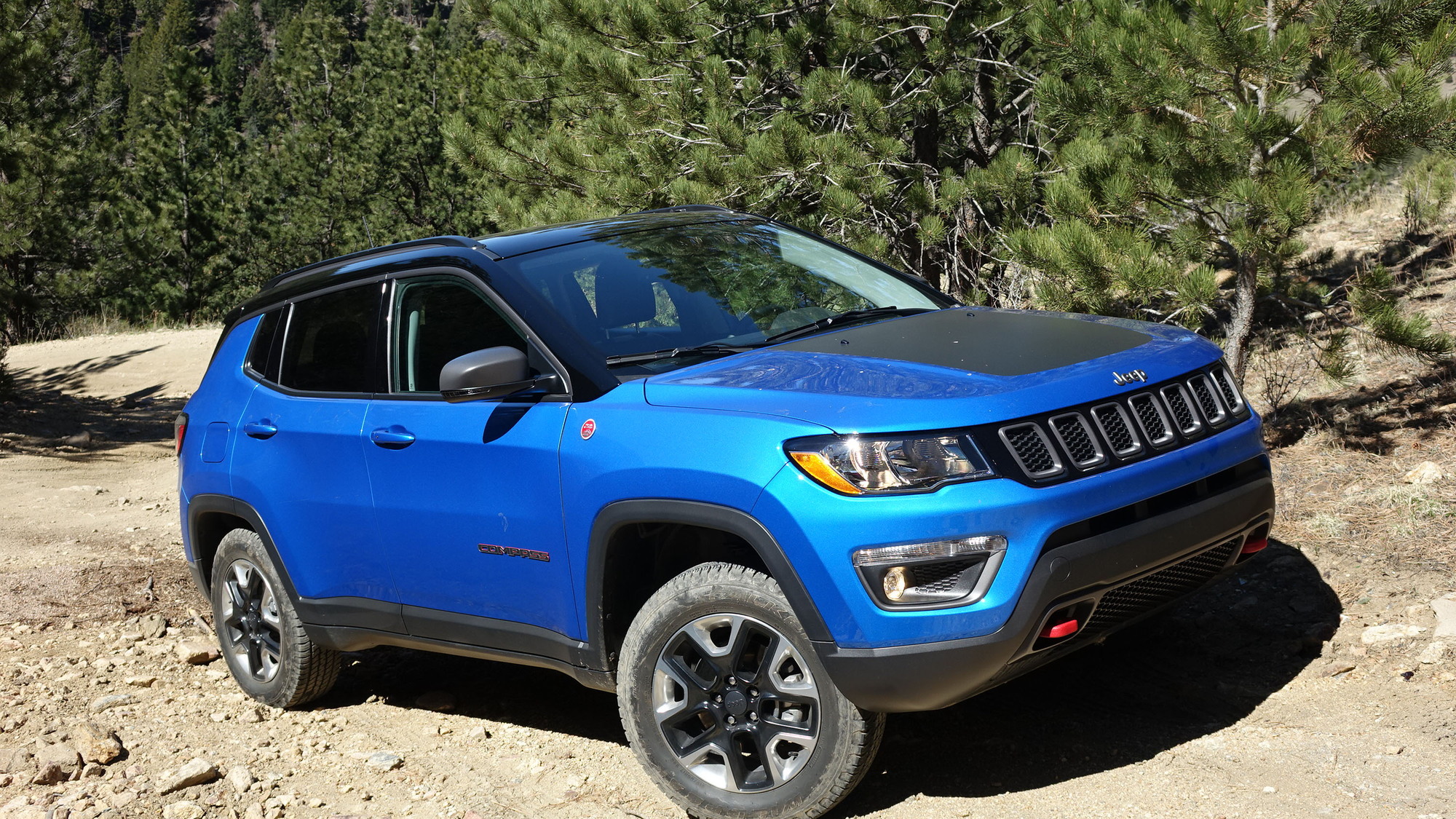 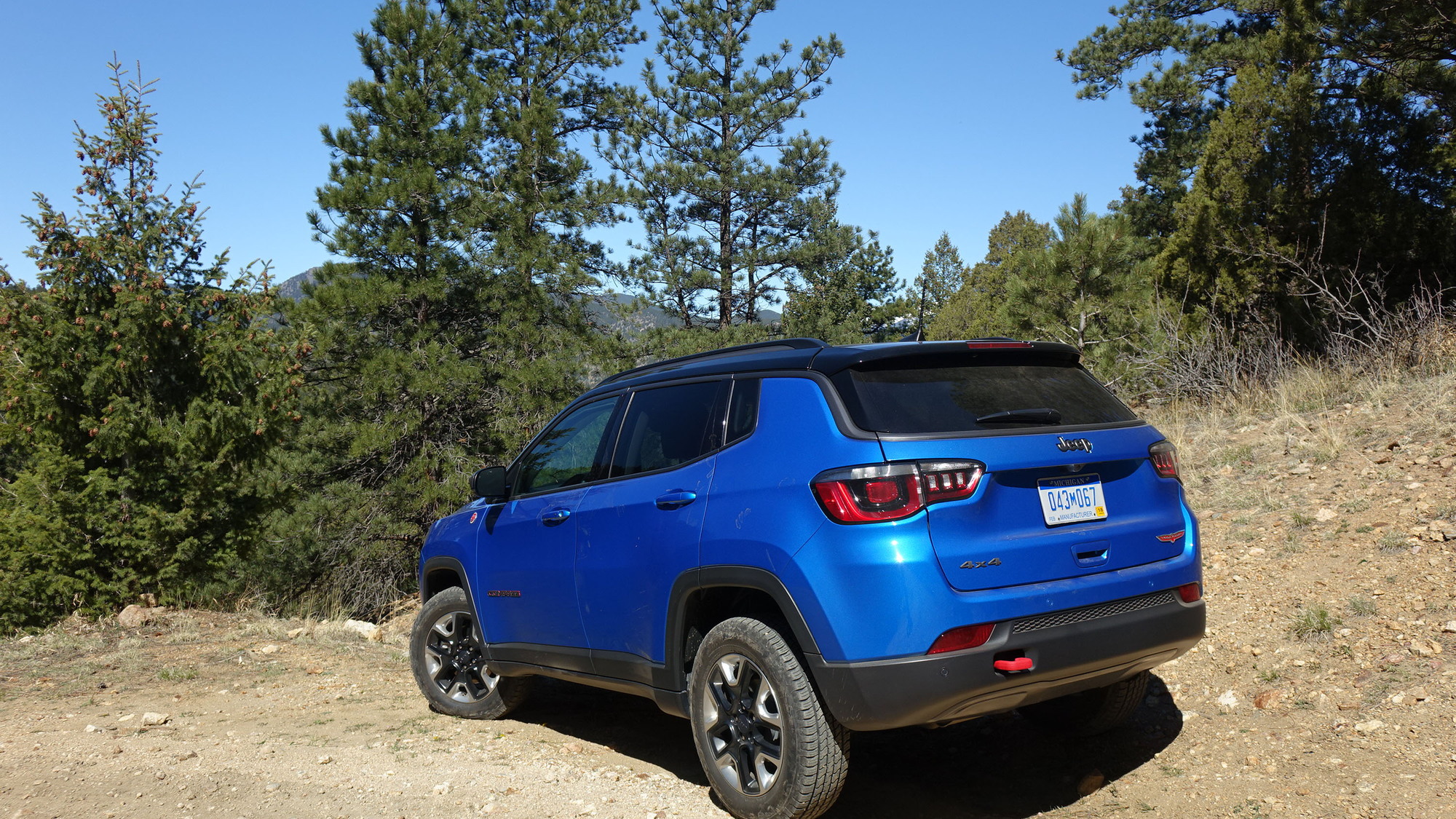 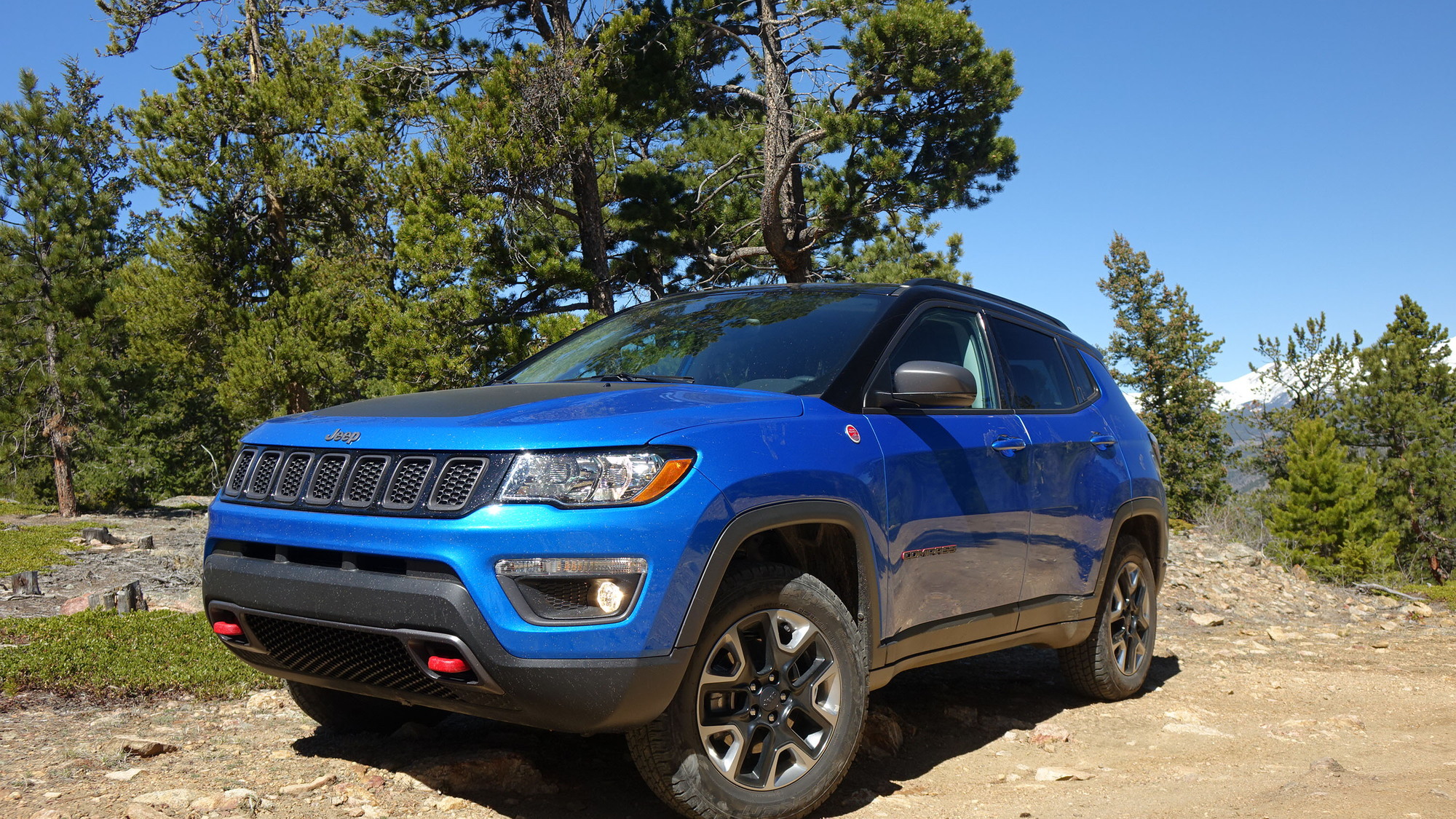 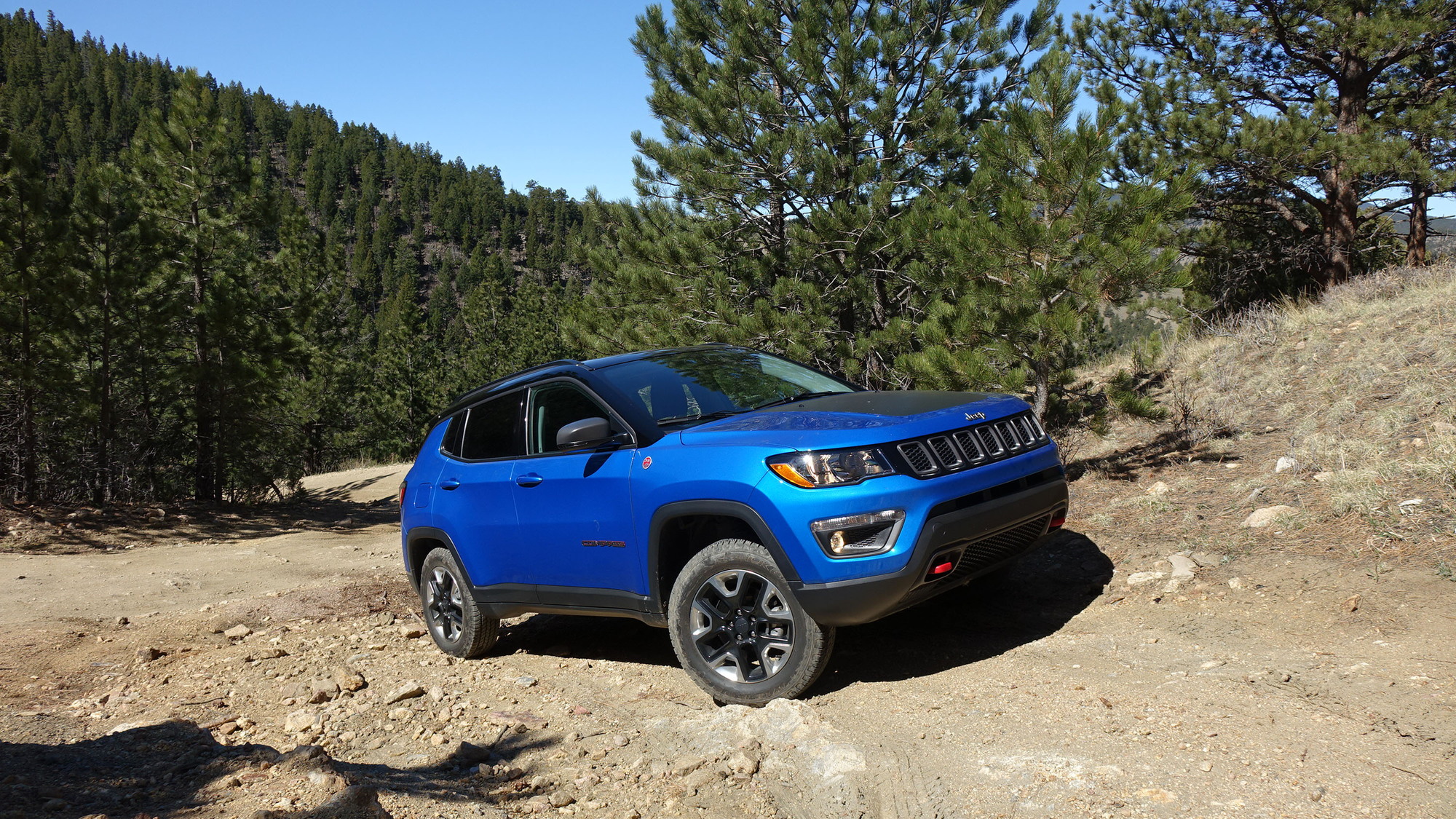 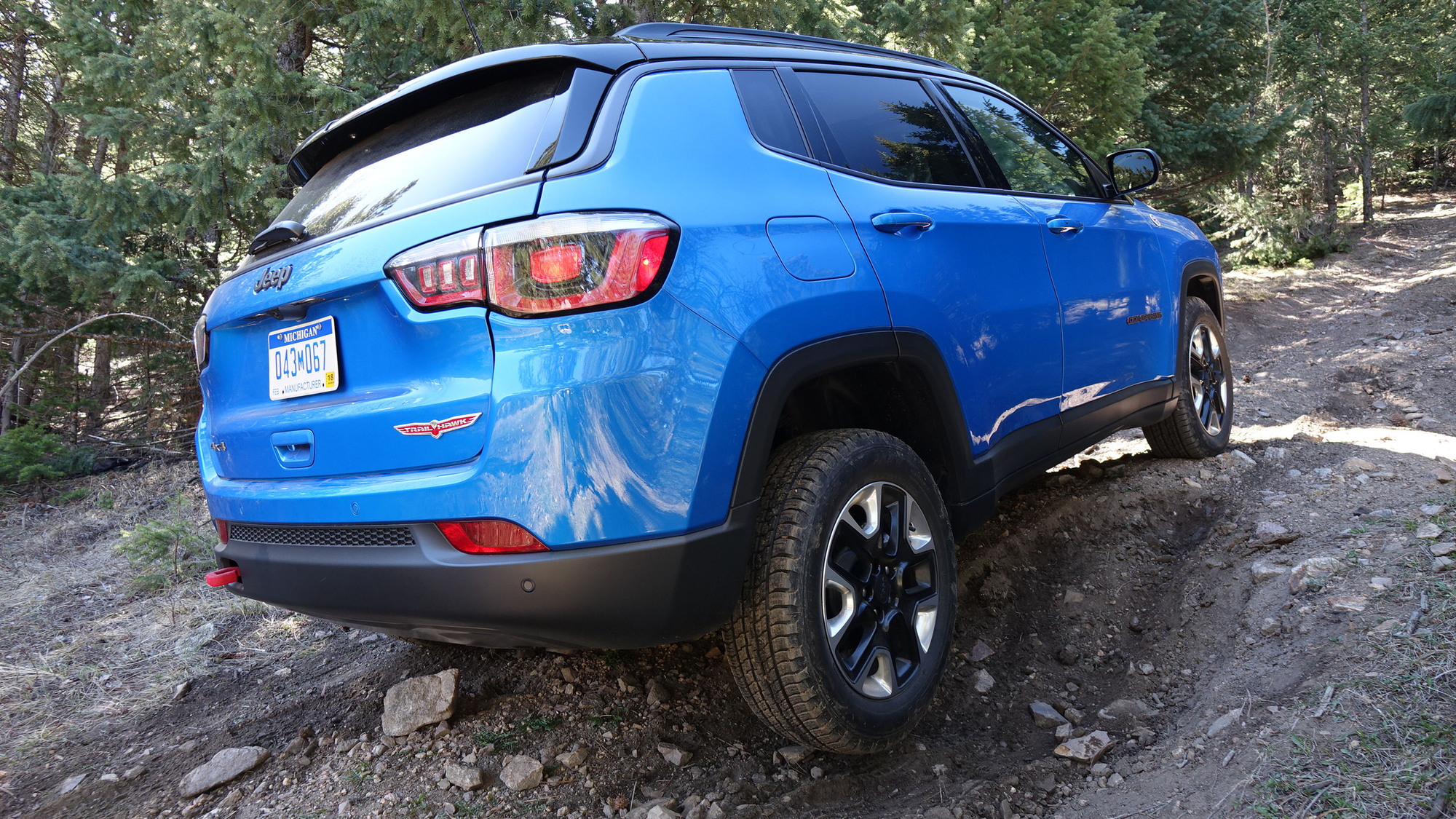 Just what is Trail Rated?

For years, Jeep has separately branded its most off road-oriented models. Years ago, it was the Up Country package. Today, it's the Trail Rated badge, which is affixed to all Wranglers and certain versions of Jeep's Renegade, Compass, Cherokee, and Grand Cherokee. Yes, it's a marketing effort, but Trail Rated Jeeps do have the goods to back up their badging—and that's important here, since the rest of the Compass lineup is decidedly pavement-oriented with their street tires and limited ground clearance.

If you define "off-road" as more than a gravel trail, you'll certainly want the Compass Trailhawk. It adds beefier skid plates, recovery points, chunkier Falken Wildpeak all-terrain tires, about an inch of suspension lift, and unique front and rear bumpers that improve its approach and departure angles.

One other thing is part of the Compass Trailhawk package: a panel with buttons and a knob for low range, hill descent control, and various traction control modes. Gone are the days of tugging up a lever and finagling an off-roader's transfer case into low range.

That's because "low range" here isn't quite what it seems. Instead of a proper two-speed transfer case, the Trailhawk has its own final drive ratio that allows it to normally start in second gear. This lets Jeep hijack first gear to imitate a 20:1 crawl ratio. That's not a great number by real off-roader standards (a Wrangler Rubicon's is about 73:1), but it does make the Compass the mud-pluggiest of its road-oriented class of rivals like the Honda HR-V, Subaru Crosstrek, and Nissan Rogue Sport. 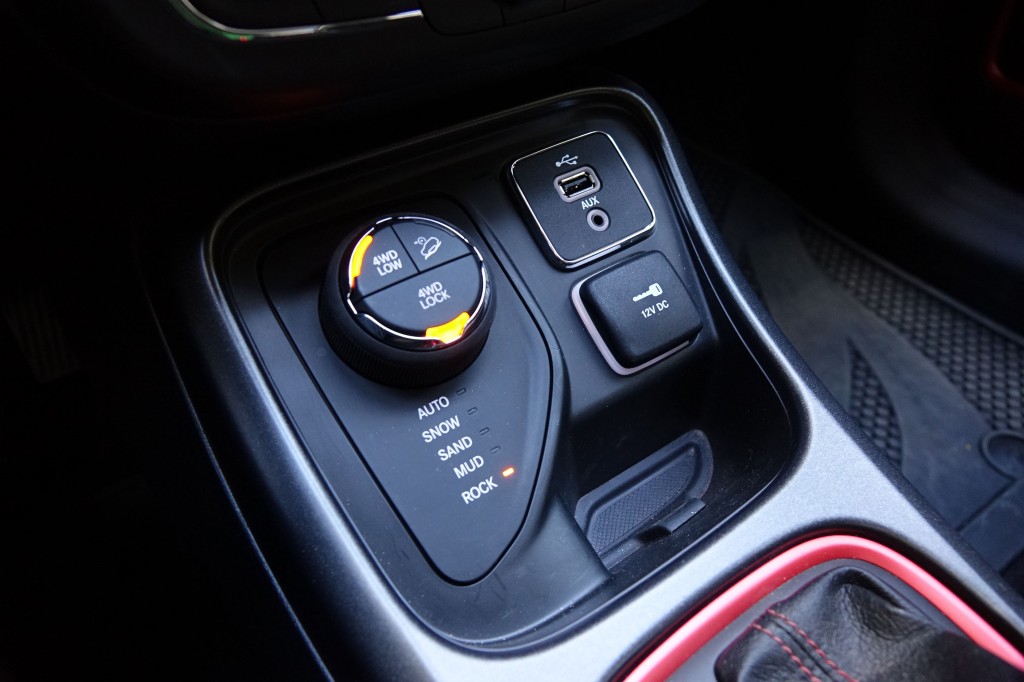 Exploring old mining trails above Idaho Springs, Colorado, I pushed my Compass Trailhawk tester as far as I could. The end result? About what I expected. It'll chug up a rocky trail without much difficulty, but limited wheel travel and a suspension keen to hit its bump stops left me realizing that this really is a crossover with chunky tires and a good traction control system. With the 4WD Lock button engaged—which tells what is normally a front-biased system to send power to each corner; there's no center differential to lock—my blue tester scrabbled up loose terrain easily, as long as its wheels didn't leave the ground.

But over undulating terrain, where a Wrangler's solid axles would compress and stretch to keep its tires on the ground, the Compass Trailhawk's traction control worked silently to keep things going...as best it could. A trail that only weeks prior didn't cause a Toyota Tacoma TRD Off-Road to break a sweat left the Compass spinning all four wheels. More aggressive tires would help, but ultimately the problem is more complicated. It needs better wheel articulation.

Coming in for approach and departure

Two big advantages to the Compass Trailhawk are its front and rear bumpers, which aren't just for looks. They endow it with vastly better approach (30.3 versus 16.8 degrees) and departure (33.6 versus 31.7 degrees) angles. At under 17 degrees, the standard all-wheel drive Compass will barely clear a curb without scraping some plastic.

The Trailhawk's raised suspension helps a little, too. It sits 0.3 inches higher than the standard model and its breakover angle improves from 22.9 to 24.4 degrees.

The bumpers aren't enough to force Jeep to test the Trailhawk separately using the EPA's fuel economy test, which makes it something of a loophole vehicle. I didn't approach the 22 mpg city, 30 highway, 25 combined seen on its window sticker, instead averaging closer to 21 mpg during a week of mixed driving. The non-Trailhawk bumper sits lower and has a special plastic spoiler designed to direct airflow to improve fuel economy, both of which should help it consume less fuel.

My test Compass Trailhawk's 9-speed automatic generally behaved better than I've come to expect for this transmission, which has come under considerable fire over the last few years. However, one quirk that I find hard to forget is how much it lets the Compass roll backward on a slope. Shift from Park to Drive and, as soon as you let off the brake, the Compass rolls nearly an entire wheel rotation before the transmission locks up and allows for forward momentum.

On a tight trail, that may be enough to ding the rear bumper. Better to aim for the bulky red tow hook—which begs the question, why do most off-road vehicles have just one rear recovery point? 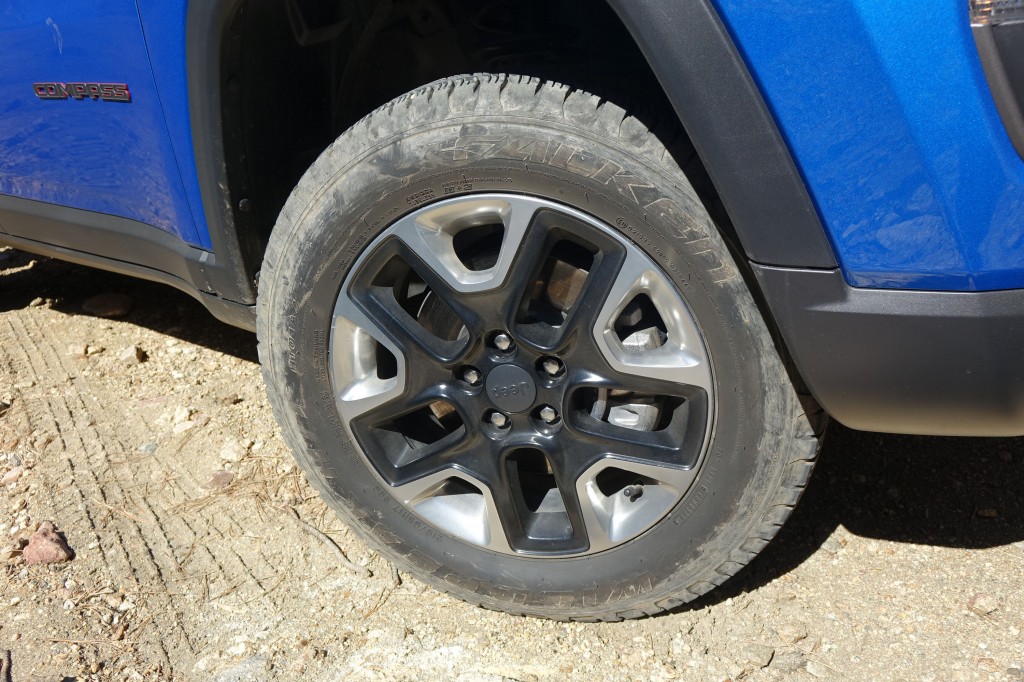 The Compass, in all of its permutations—front-wheel or all-wheel drive, stick shift or automatic, Sport, Latitude, Limited, or Trailhawk—is offered with a staggering array of tire brand and size choices available:

If you read all that (and, let's be honest, you probably didn't), you noted that the Trailhawk is only offered with Falken Wildpeak H/T tires. They're fairly beefy for something in this segment, with big tread blocks, but their 215/65R17 size means they don't exactly have a lot of sidewall. That's something you'll want to note if you're venturing where rocks and tree roots may make contact with the tires.

Keep your expectations in check and you'll find a delightful little off-road runabout in the 2017 Jeep Compass Trailhawk. For getting to a remote fishing spot or campsite, it will do exactly what most buyers need—and in a compact, maneuverable package.