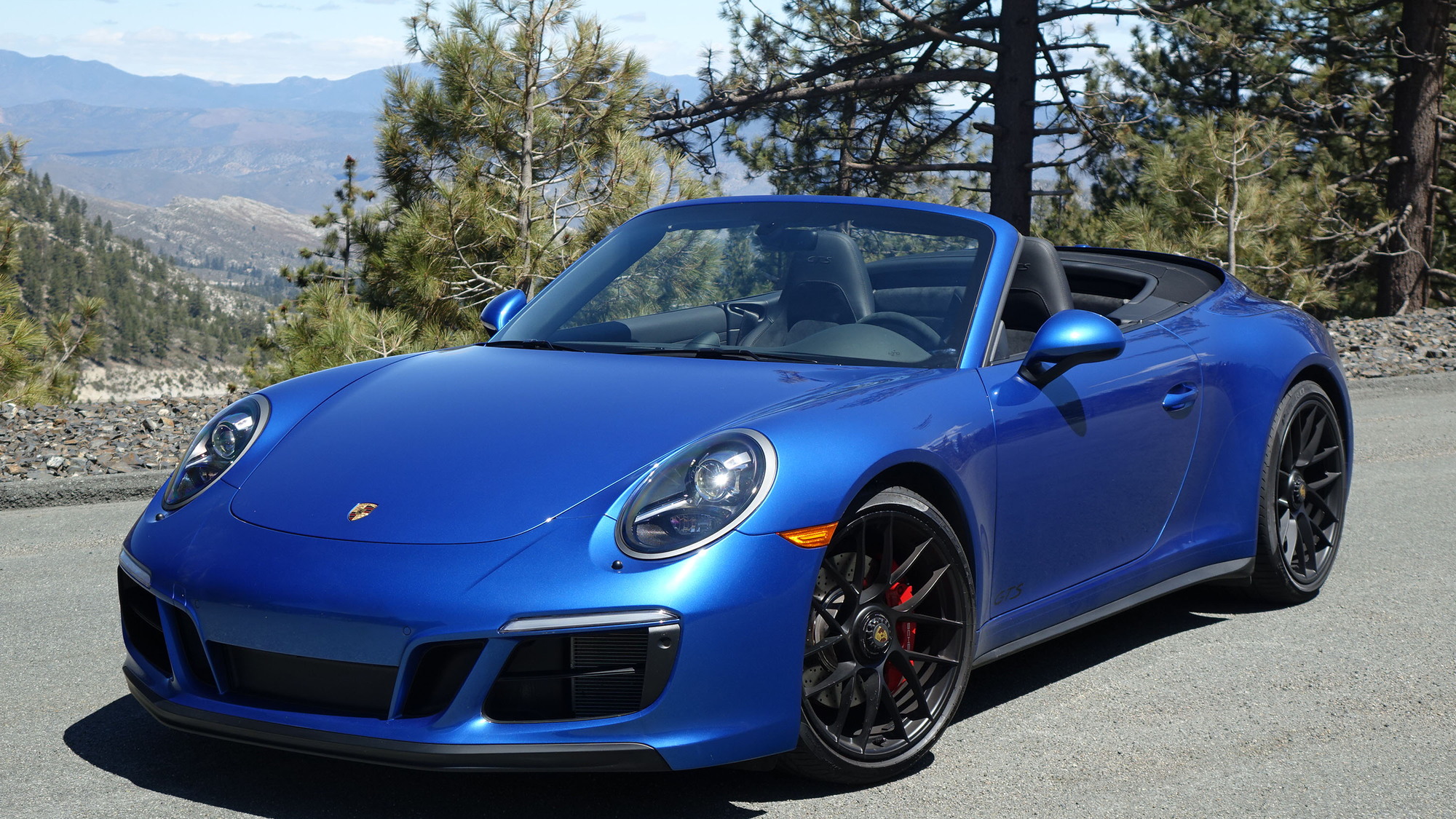 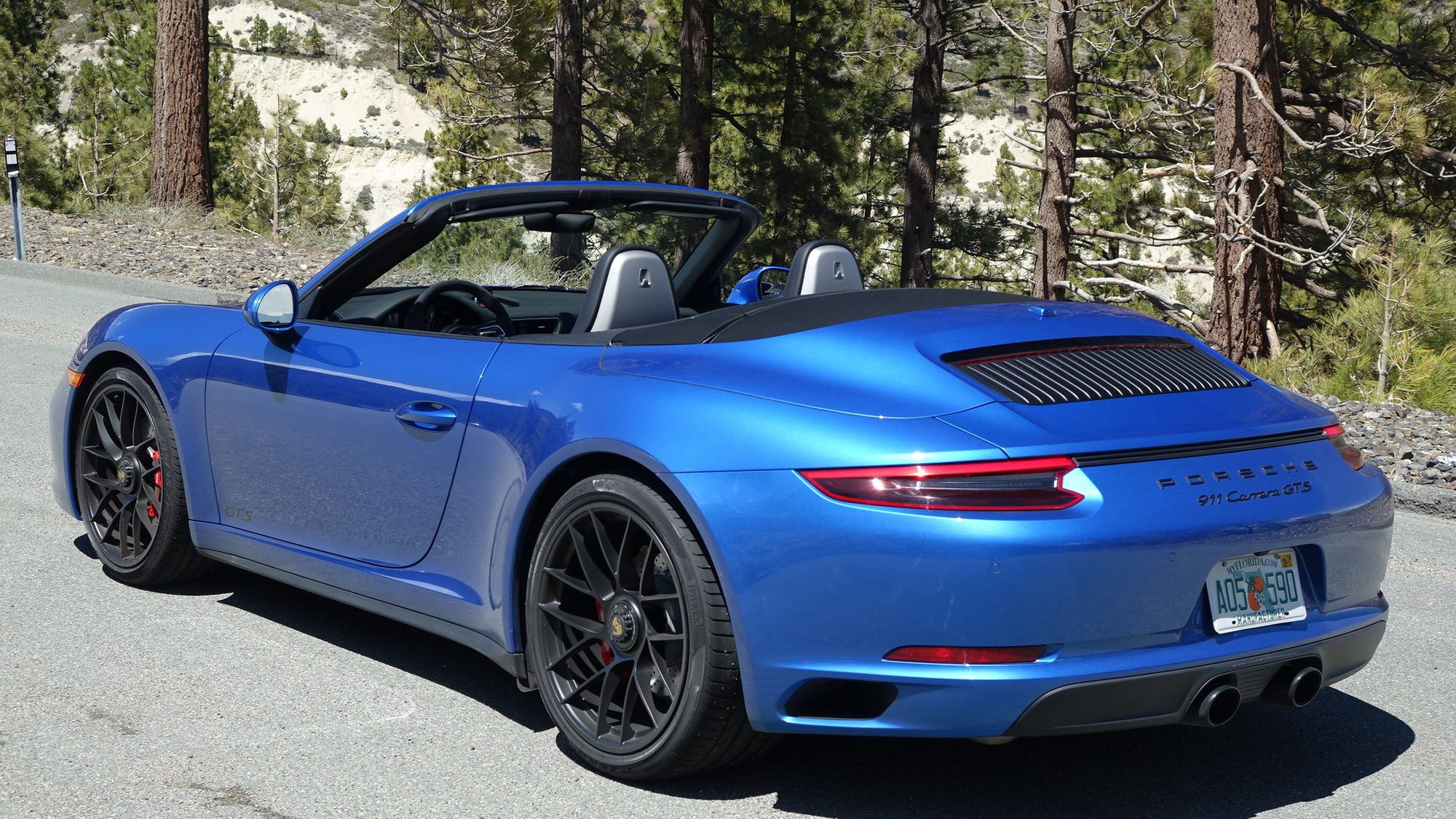 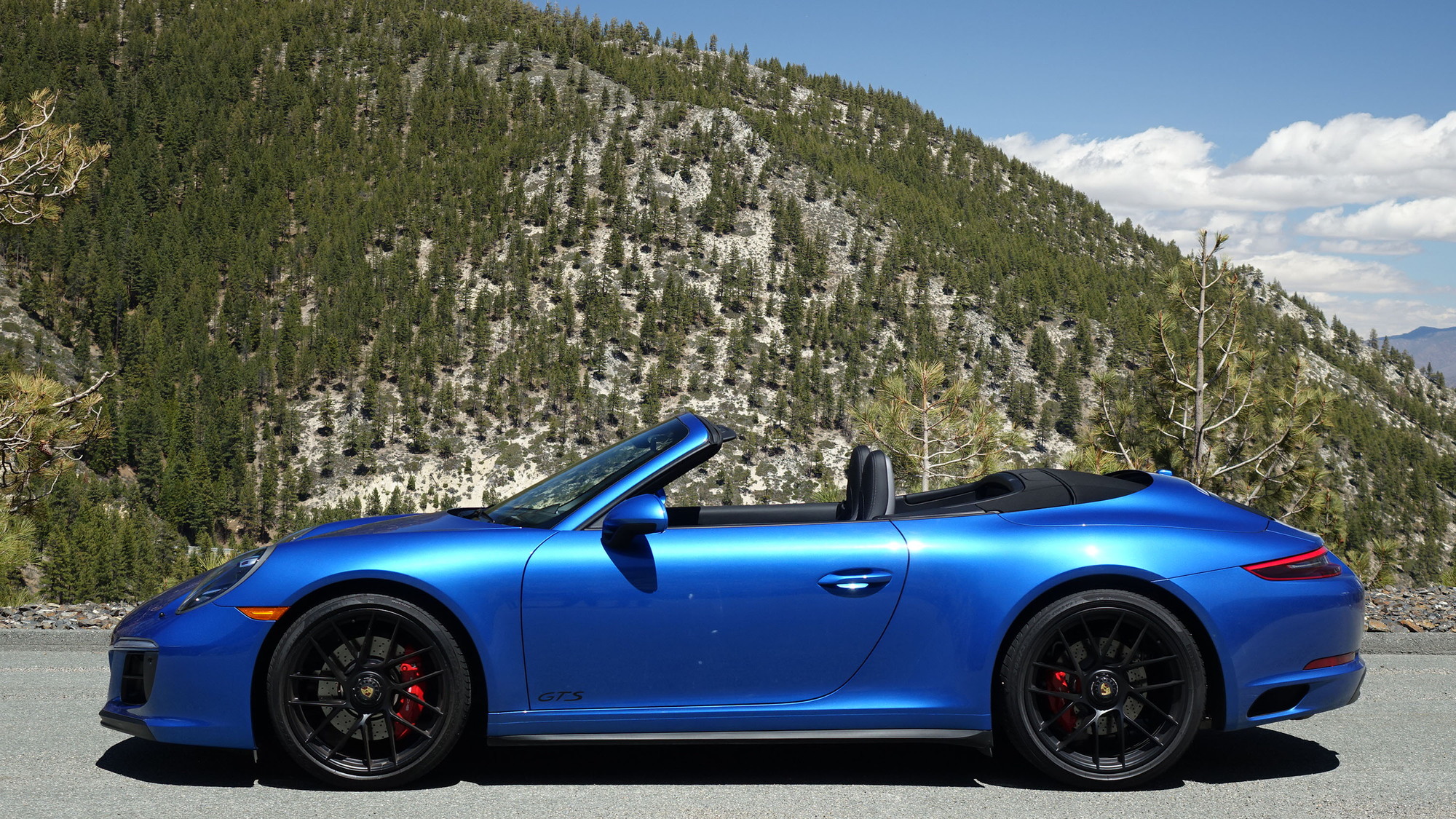 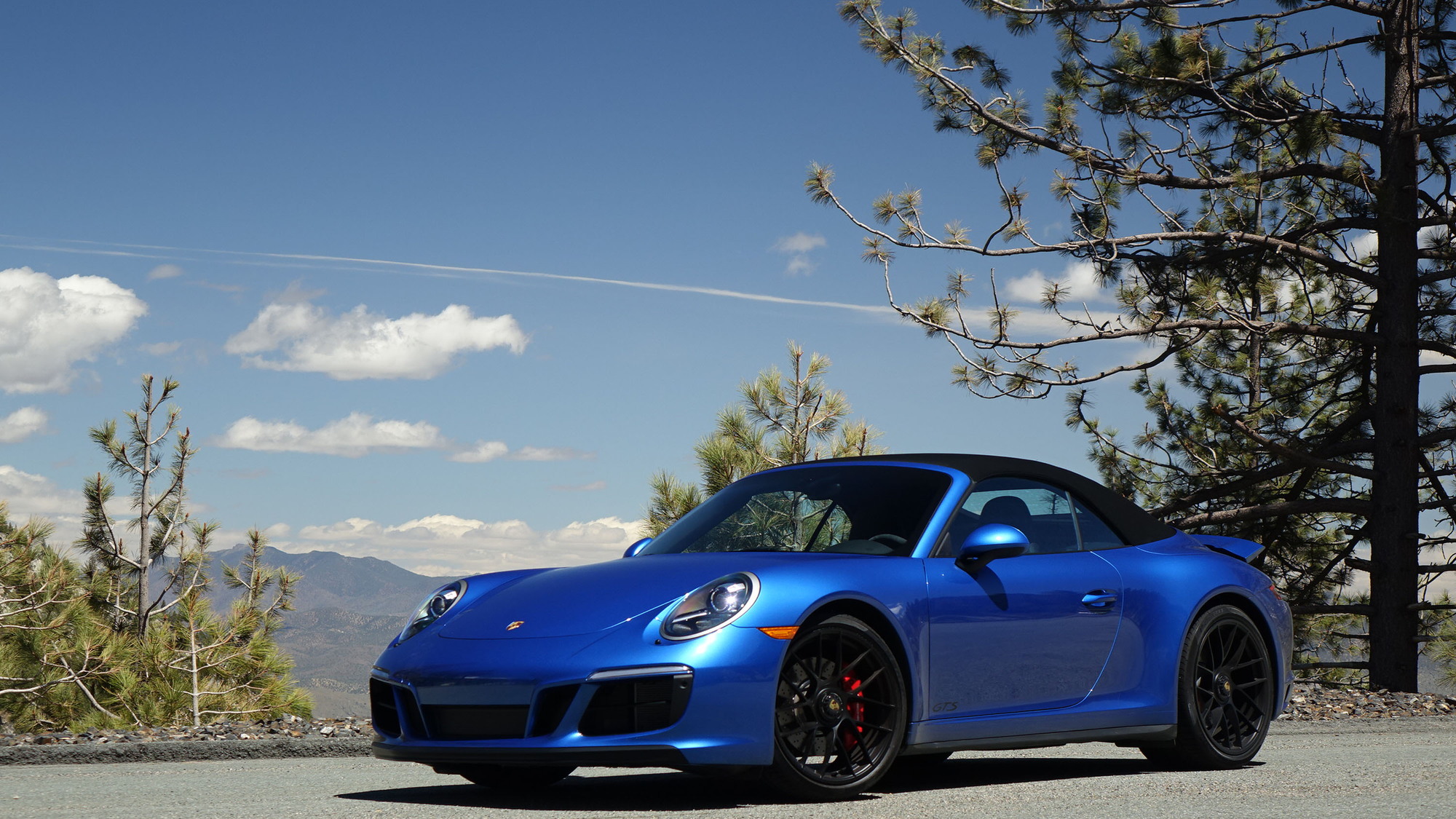 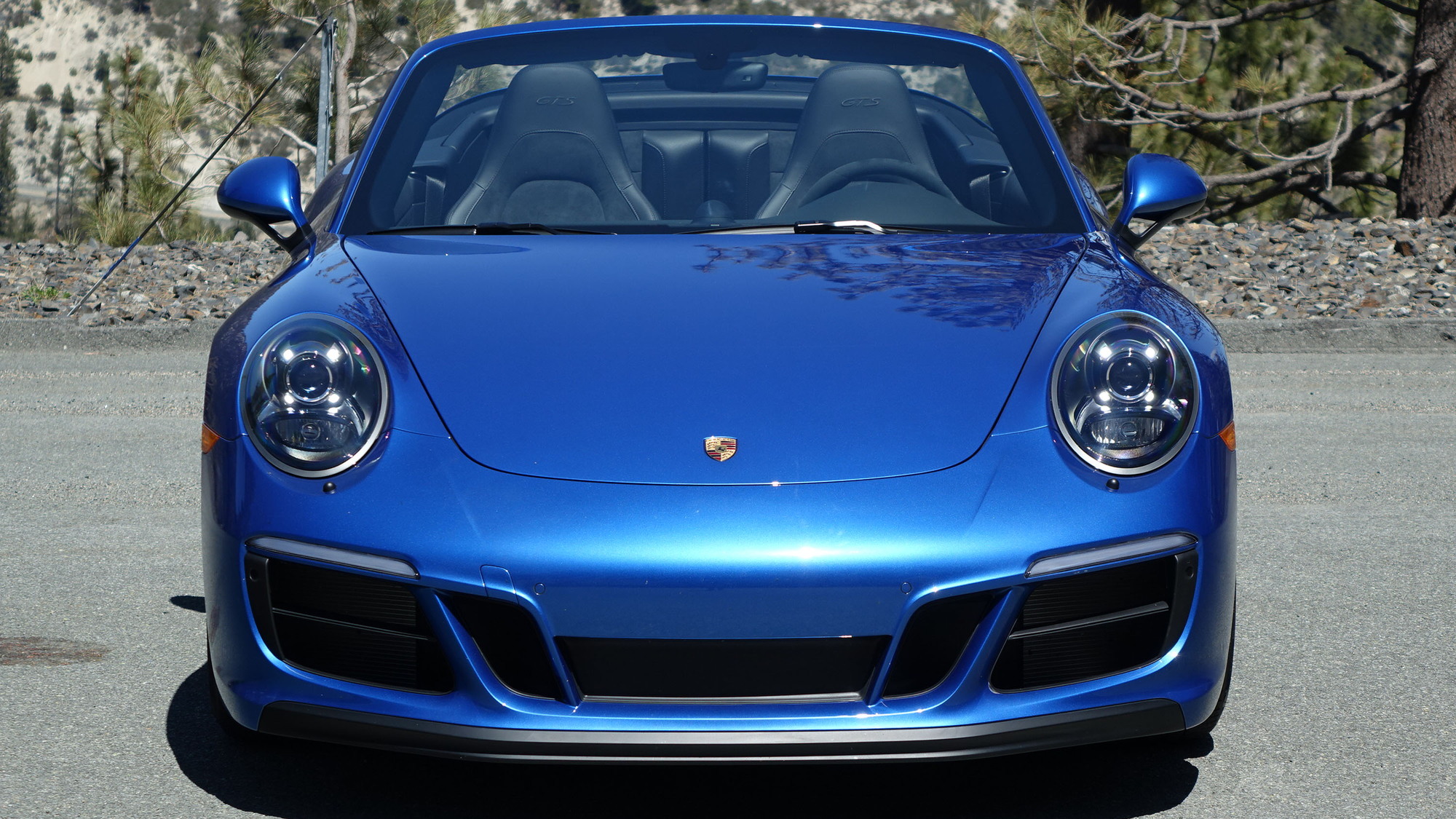 At times, it has felt like Porsche’s myriad 911 configurations serve only to answer questions nobody was asking.

But this is not one of those instances. After a few hours behind the wheel of a 2017 Porsche 911 Carrera 4 GTS Cabriolet, Porsche's wisdom becomes crystal clear. Sure, it's basically a 911 S droptop with just a few extra goodies, but those selected add-ons take it from damn near perfect to so good you’d swear it was a cubic zirconia instead of the real deal.

DON'T MISS: We drive the 2017 Porsche 911 Carrera GTS on track in South Africa

And it’s not just the scenery as I snake along some of the prettiest roads in the country, straddling the border between California and Nevada in and around Lake Tahoe. In mid-May, these roads are gloriously empty during the period between ski season and summer boating. It’s truly Goldilocks hour in what certainly feels like Goldilocks’ 911.

To build the GTS, which is now available in coupe, convertible, and Targa forms, Porsche started with a Carrera S fitted with the Carrera 4’s wider flanks and began adding options. It winds up feeling like a bespoke model.

Revamped turbochargers with a higher boost pressure bump its 3.0-liter flat-6 up from 420 to 450 horsepower and a sport exhaust with an even louder mode available at the press of a button delivers more rumble. Cabs and Targas ride on Porsche’s Active Suspension Management adjustable dampers that drop their ride height almost half an inch (coupes have a different version of this setup and they sit a quarter of an inch lower, making the optional front axle lift a must for those with steep driveways). A locking rear differential—mechanical with the 7-speed manual and electronic with the optional PDK dual-clutch gearbox—makes the most of that available power and improved rear brake air ducting helps bring things to a halt. Rear wheel steering is on the options list.

A Sport Design body kit adds some visual distinction, but it’s the black center-lock wheels cribbed from the 911 Turbo and black trim that stand out more—including a black bar on the Targa (you can get aluminum if you want).

Inside, it’s business as usual aside from Alcantara synthetic suede on the seats and reduced sound deadening in the firewall area to let passengers hear the flat-6 make its noises. That’s a welcome subtraction since the now-turbocharged 911 base and S are a little muted compared to their naturally aspirated predecessors.

Grippy Pirelli P-Zero Nero rubber puts power from either the rear- or all-four wheels to the ground, depending on whether the buyer has coughed up the extra $6,900 for a Carrera 4 GTS (admittedly, Targa GTSs are all Carrera 4s).

Rarely does a Porsche seem like a bargain, but the 911 GTS sure comes close.

Even with its sport suspension system and lower ride height, the 911’s chameleon-like ability to transition from grand tourer to sports car remains fully intact. The GTS rides firmly, but compliance remains the name of the game. This isn’t a dedicated track-day star like a 911 GT3, but it hardly loses its composure when the wick is turned up.

The GTS’ flat-6 makes the most of its extra power. It’s easy to be thrown off by the fact that the now-all-turbo 911 lineup delivers all of its 405 pound-feet of torque at 2,150 rpm before tapering off at 5,000 rpm. Whereas driving a 911 used to be about revving its motor all the way to redline, acceleration is instant in any gear at just about any speed now. It's more usable in the real world, but maybe not quite as rich in character.

With Sport mode selected to tighten up the suspension even further, the GTS gleefully carved its way through Nevada’s silver country. I drove the coupe briefly, but, frankly, with the top raised, the Cabriolet isn’t noticeably louder. Only slightly reduced over-the-shoulder visibility with the top raised serves as a reminder from inside that you’re driving the sunny day version of the 911 GTS. Drop the thickly insulated top and press another button to raise its wind blocker and it’s possible to have normal voice conversation at speeds approaching triple digits while still soaking up the rays.

Even the Alcantara sports seats, which only offer limited power adjustment as standard (hey, it saves weight!), are perfect for a droptop. Their surfaces don’t get nearly as hot as shiny hides.

Porsche says about half of all GTS buyers will opt for the hardtop, which is marginally stiffer and certainly more oriented toward the occasional track day outing with a sports car club. Around a third will go for the Cabriolet, with the remaining buyers snapping up the all-wheel drive-only Targa.

If there’s a lingering question in my mind, it remains centered around the 911 Carrera S. Given the GTS’ blend of precision and compliance, not to mention its relative value, the S begins to feel like the odd 911 out. It’s a good problem to have for Porsche, that’s for sure.