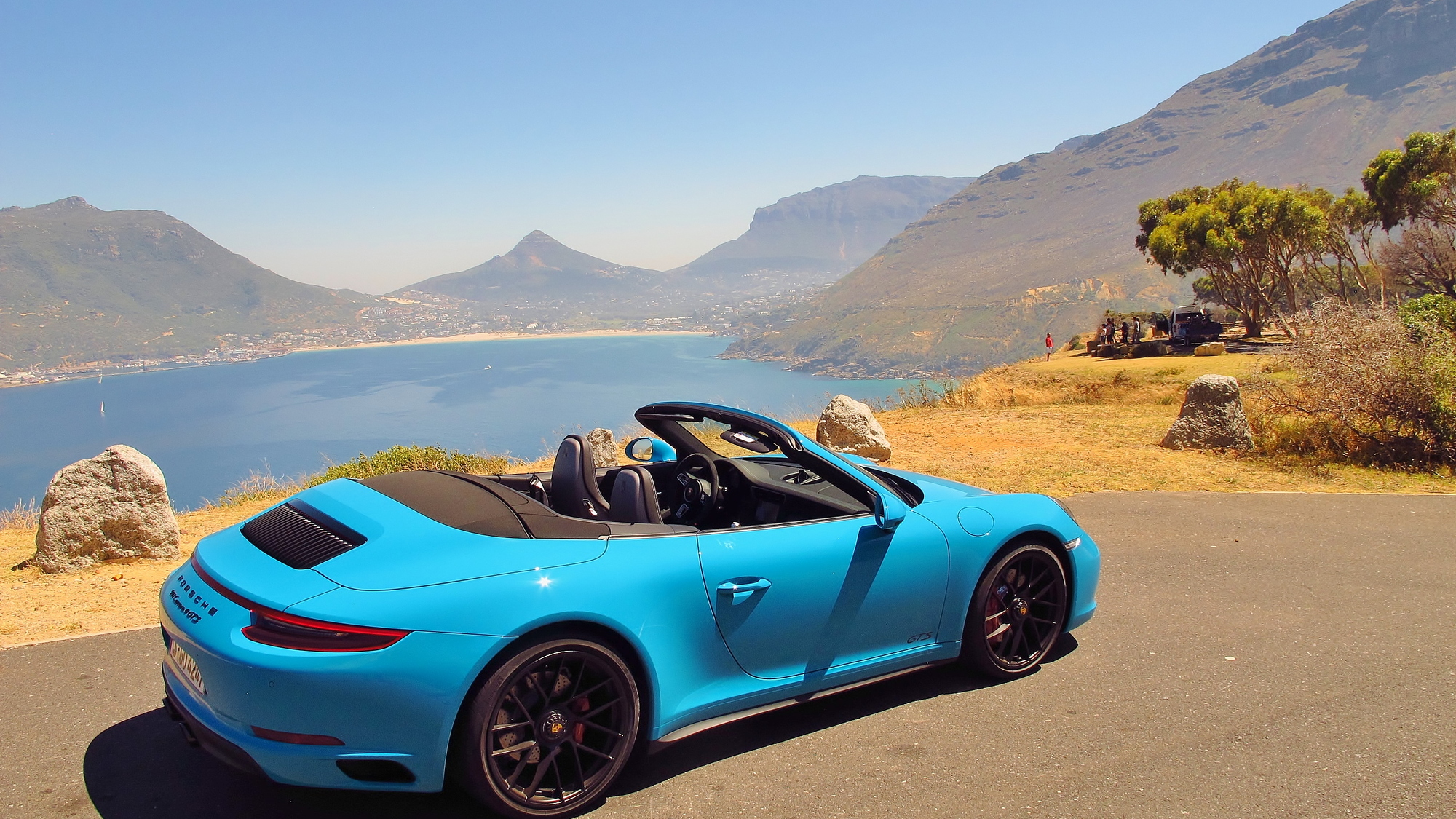 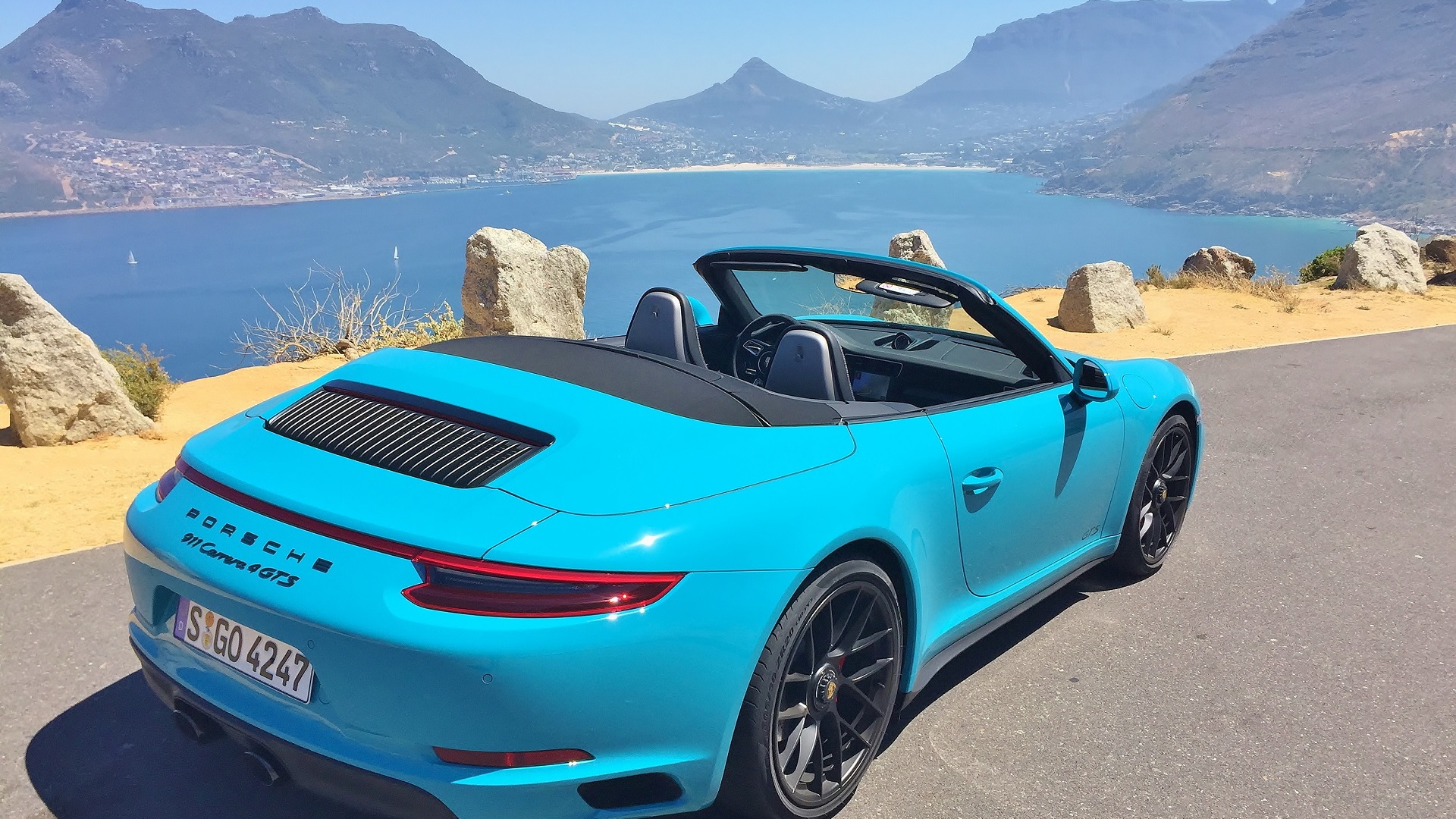 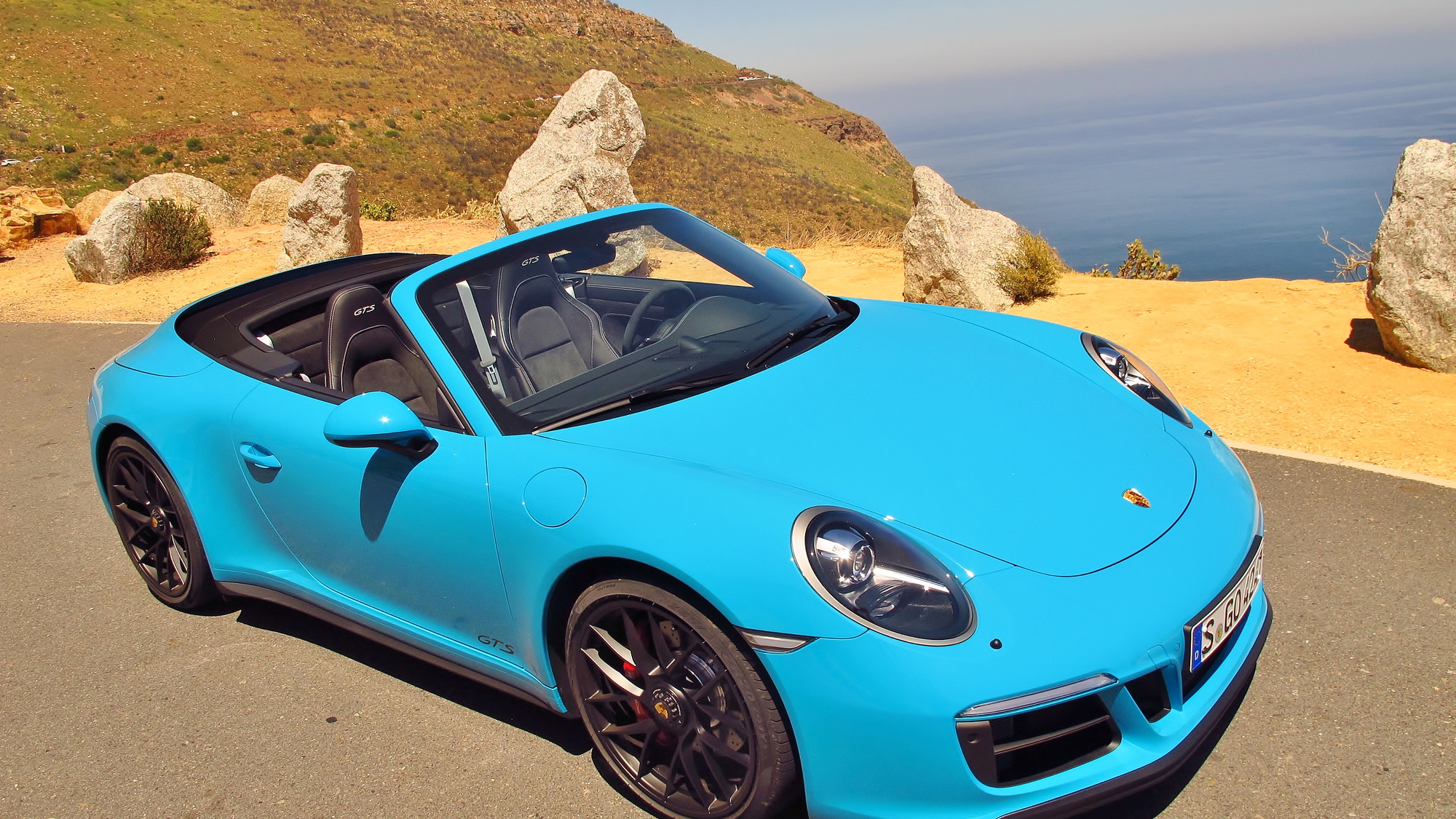 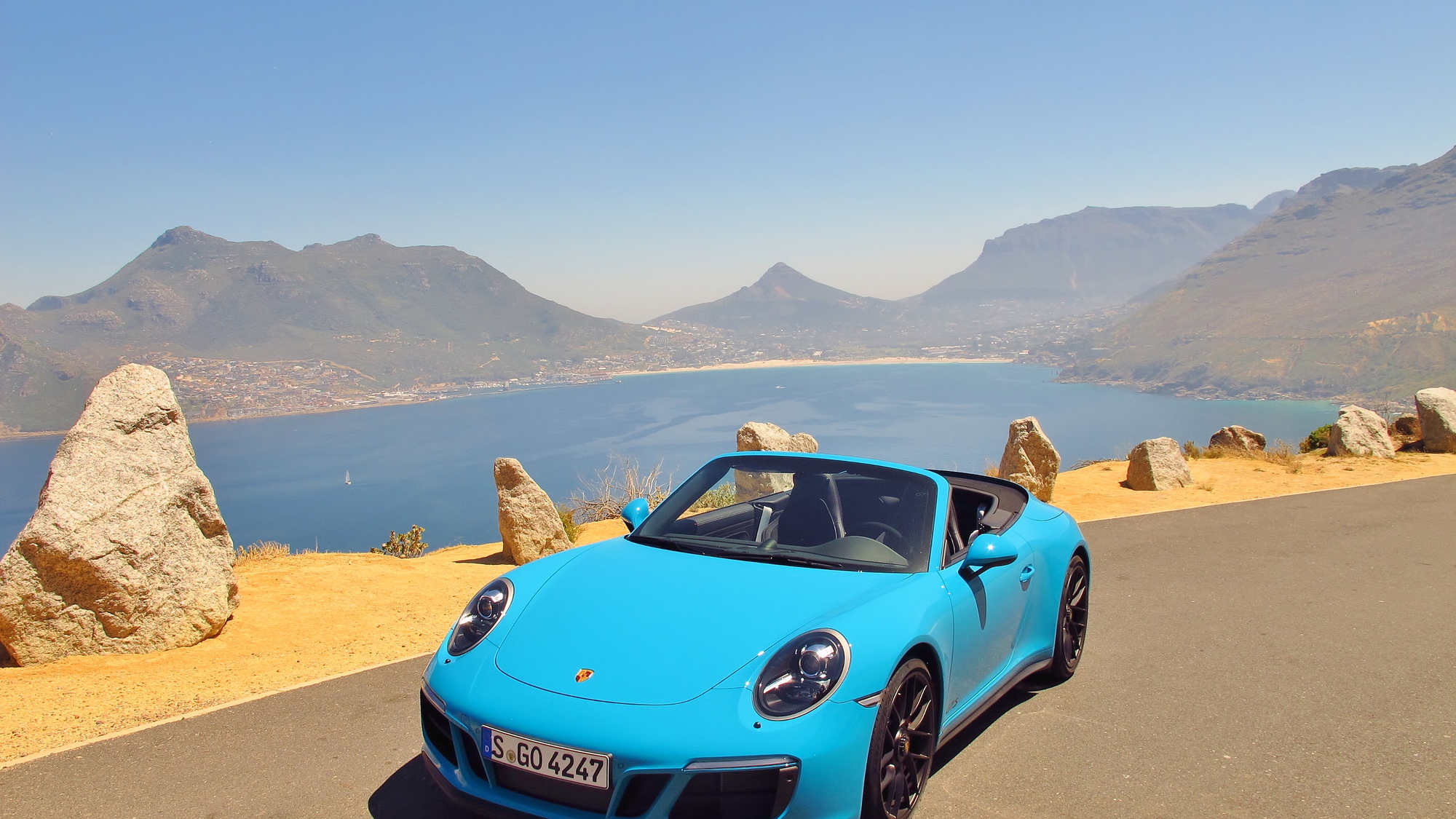 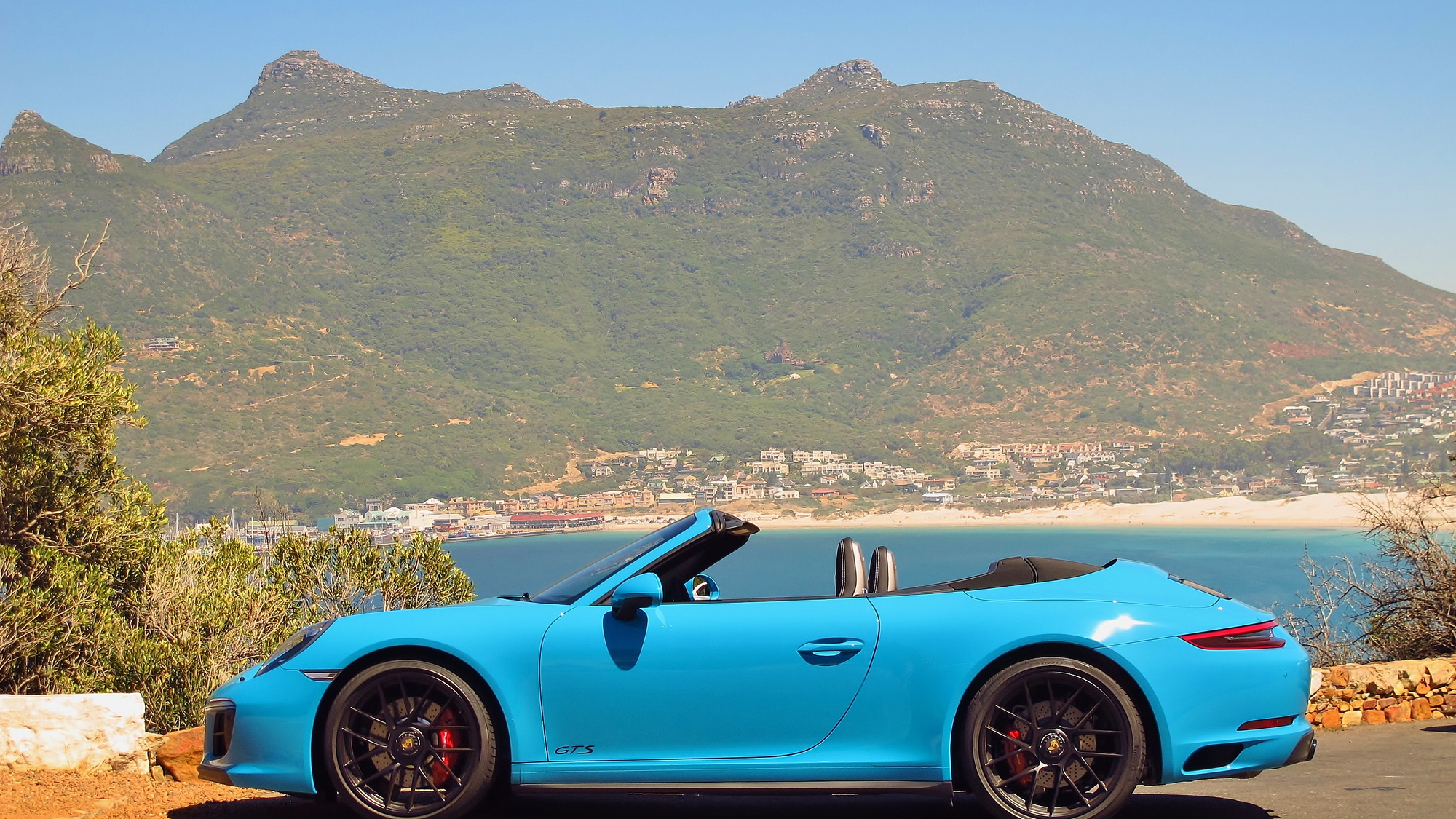 Cape Town, South Africa - I'm at the wheel of the 2017 Porsche 911 GTS at Killarney Raceway behind 2016 24 Hours of Le Mans winner Marc Lieb and I'm frustrated. Lieb, in the even more powerful 911 Turbo S, is setting a leisurely pace and I want to pass him. It's not because I'm some world-class driver. Another well-meaning but less confident journalist is trailing behind and Lieb needs to keep this lead-follow trio together. The other journalist is going as fast as he can within his comfort zone. I'm going at about six tenths. This amazing piece of German engineering is barely exercised, and Lieb is probably taking the opportunity to do his taxes.

I'm mostly frustrated because I'm not really learning anything about this car's near-the-limit handling. The GTS is the 911 turned up a notch and I want to put it through its paces to see if it's worth the approximately $16,000 premium Porsche charges for the car while I have the chance to test it on a racetrack. Maybe that's just not in the cards today.

Let's back up a bit. Just what is the 911 Carrera GTS, and what makes it special?

The 911 Carrera GTS is offered in every body style: coupe, Targa, and Cabriolet. The Targa is actually the all-wheel-drive Targa 4, and the coupe and Cabriolet are offered as rear- or all-wheel-drive models. All get the wide body from the Carrera 4, giving them a 1.57-inch wider track at the rear. Up front, the GTS models feature the toothier SportDesign front fascia and a more pronounced front spoiler. At the rear, the spoiler extends higher than on Carrera S models to reduce lift front and rear.

The easiest way to spot a GTS model (aside from the GTS badge) is the blacked out trim, which includes the logos, rear grille, tailpipes, and Targa bar on that model. Don't worry, if you don't like the black, you can opt for the stainless trim that best defines the Targa. Porsche's racing style 20-inch center-lock wheels from the Turbo S model are standard, and they come painted in satin black as well.

The coupe models get the Porsche Active Suspension Management Sport Suspension, which lowers the car .039 inch compared to the S model, and the others have the standard PASM Suspension. Both systems are essentially adaptive dampers. The Sport Chrono package is standard. It includes dynamic engine mounts; a launch control feature; a digital and analog lap timer; a mode switch with Normal, Sport, Sport Plus, and Individual modes; and a Sport Response button that readies the engine and transmission for optimal performance for 20 seconds. The Sport Exhaust system is also standard and all GTS models have less sound insulation to make the engine note more prominent.

All GTS models enjoy a power boost as well, thanks to larger components for the turbine, compressor, and housing, and 18 psi of boost pressure instead of 16 for the S model. That increases horsepower from 420 to 450 and torque from 368 to 405 pound-feet. The horsepower peak is at the same at 6,500 rpm, but the torque comes on a little later, with peak torque arriving at 2,150 rpm and continuing through 5,000 rpm instead of the 1,700 to 5,000 rpm range of the S model. That's what you get with bigger turbos.

All of these upgrades add up to real, measurable performance, not that the 911 Carrera S isn't impressive already. A 911 Carrera 4 GTS coupe can accelerate from 0-60 mph in just 3.4 seconds, 0.3 seconds quicker than the fastest S model, and the GTS coupe can reach a top speed of 193 mph, two clicks faster than its S counterpart.

With all the performance goodies, a GTS coupe lapped the Nürburgring in just 7 minutes, 26 seconds, which is four seconds faster than the Carrera S and almost two seconds faster than the legendary Carrera GT supercar of a decade ago. Porsche threw its new track-focused Pirelli P-Zero Nero Corsa N0 tires on it and that time dropped to 7:22.

Porsche invited Motor Authority to Cape Town to not only drive the 911 GT on the track, but to also experience it along a couple of beautiful coastal routes in a country that has shed its disgraceful apartheid past but is still recovering from that injustice.

My first exposure to the 911 GTS is in a yellow Cabriolet along one of those coastal routes.

Despite driving a left-hand drive car on the wrong side of the road, I'm immediately enamored with this car and this city. The turbos don't detract from the experience. They only enhance it, adding a turbo whoosh to the classic Porsche flat-6 wail. Power is plentiful across the rev range. Yes, the GTS' power comes on 450 rpm after the S model's but I can't notice it. In a drag race, the S might win an a 0 to 20 or 30 mph sprint, but the GTS' power advantage really starts coming on at about 3,000 rpm and it will beat the S to 60 and continue to walk away as the speedometer climbs upward.

The GTS sits lower than other 911s but it doesn't lose the uncanny compliance that marks the lineup. You can drive this car every day, despite 20-inch wheels and low profile Pirelli P-Zero rubber, 235/35s up front and massive 305/30s out back.

A drive through the clean and hospitable city soon gives way to a coastal vista that is as breathtaking as anything you'll see anywhere in the world. Better yet, the road turns twisty and that gives me a chance to test the GTS's handling.

As expected, precision is the keyword here. The steering has a bit of heft. It's quick and it puts the car exactly where you point it. The wide track and low center of gravity leave little room for body lean, and this car just reels in the corners, locking in on the next one, quickly dispatching it, then moving on to the next again and again. Even with the less rigid Cabriolet body, this car is rock solid.

Still, I yearn to drive it hard on a racetrack.

That chance finally comes late on the track day. After most of the journalist have headed back to the hotel, I've stuck around for another chance at the track. And now I have it. This time it's just going to be me and Lieb.

"What's going to determine how fast we go?" I ask him.

With that, I jump into the car. This time, it's a white coupe with a manual transmission and the carbon fiber performance seats that we don't get in the States. I love manuals, but I'm not exactly comfortable attempting to heel-and-toe on a racetrack in a car I still barely know. Lieb takes off before I can get the seat adjusted the way I like it. And when I say takes off, I mean takes off. The pace is much faster this time around.

"Way to open your pie hole, big mouth," I mutter to myself," as I put it in Sport+ mode, then begin running up through the gears to try and keep up with the latest Le Mans winner, who is driving a car with 130 more horsepower than mine.

But my concerns are soon set aside and it's just time to drive this car the way I've wanted to from the start.

Killarney isn't an overly technical track. It's two miles long with nine turns and a couple of them are of the double-apex variety. The straights aren't long enough for the Turbo S's horsepower advantage to walk away from me too far, but Lieb's skill certainly is.

Nonetheless, I'm confident behind the wheel of this beast. It's outfitted with those sticky P-Zero Nero tires, and that gives it grip for days. As we enter corners hot, the optional carbon ceramic brakes provide a ravenous bite, but we still carry enough speed through the turns to start losing grip, just a bit. It manifests itself in the slightest bit of rear end slide that is predictable and controllable with a "touch of oppo." Once the midpoint of the corner arrives, the standard brake-based torque-vectoring helps set the car back on its path and it's time to ease back into the throttle for the next straight.

You'd think that the rear engine design would act as a pendulum and send this car spinning in corners. You'd be wrong. The balance is impeccable, made possible, at least partially, by those wide and sticky rear tires.

I repeat this thrilling dance for two laps behind one of the world's most talented drivers in one of the world's best cars, and I'm struck by just what an amazing machine this car is. The 2017 Porsche 911 Carrera GTS is built for track duty. It can handle this punishment without breaking or overheating, and then drive home comfortably.

Porsche isn’t in the business of offering bargains, and Porsche buyers don’t usually need them. Porsche will sell you any option you want for your rear-engine sports car, right down to the color and materials choice for the dash vents, so it’s no surprise that the average 911 buyer adds $15,000 to $18,000 of options to his/her car.

With that in mind, I say if you are considering a 911, go for the base model and leave off the options or skip the S altogether and step up to the GTS. If you can can a 911 a bargain, this is the one. It can make you feel like a hero, even when chasing a Le Mans winner.