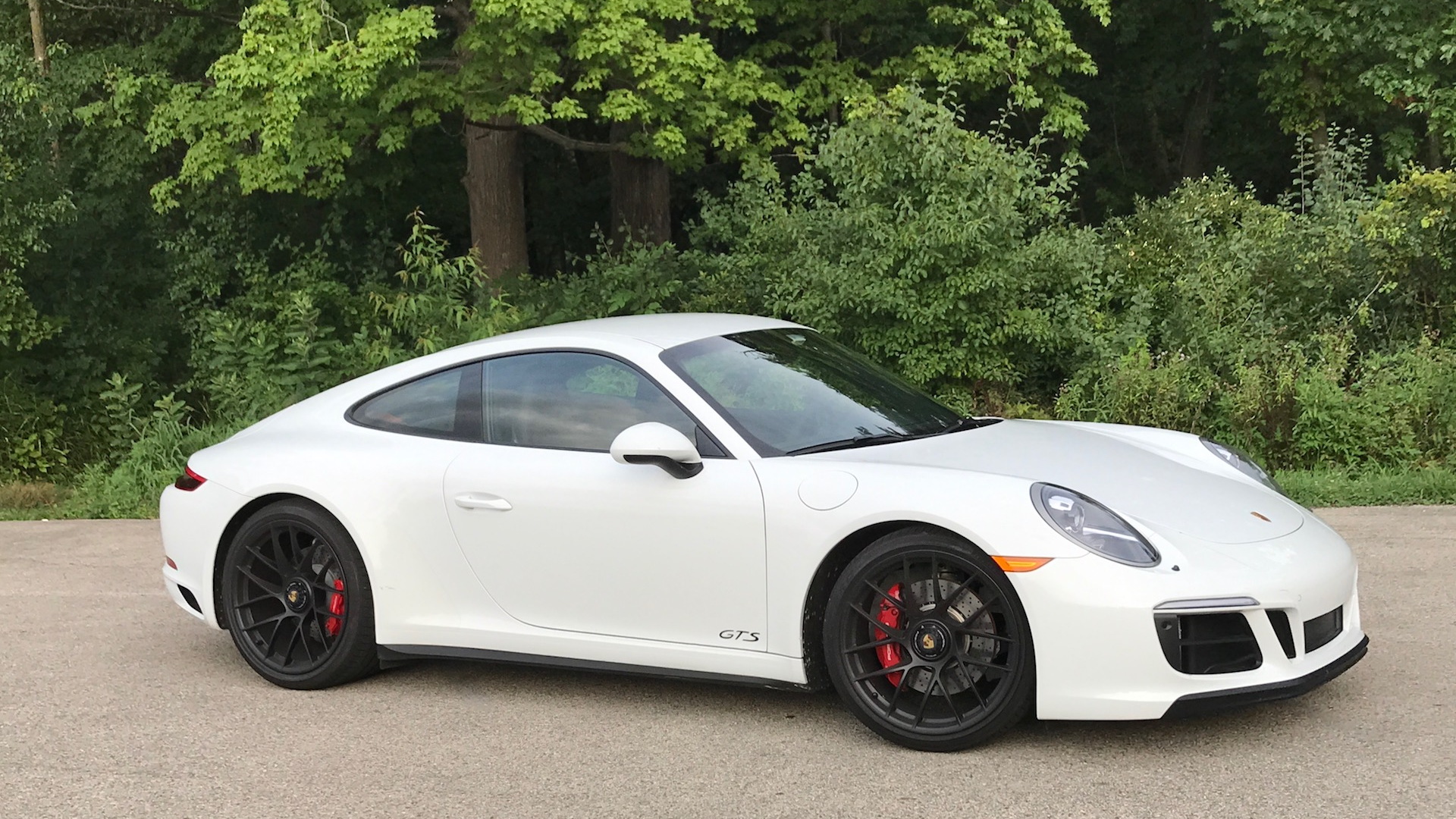 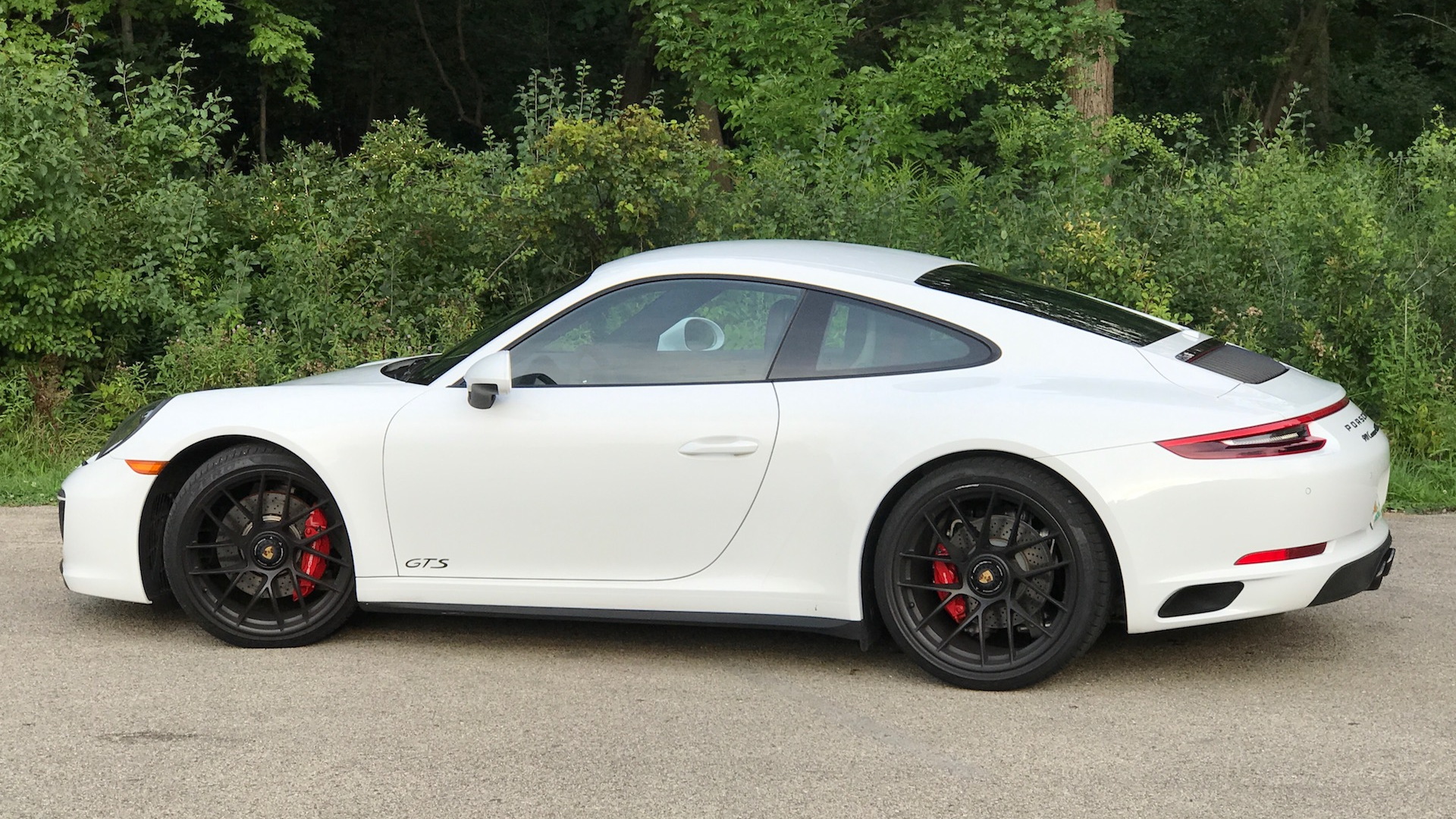 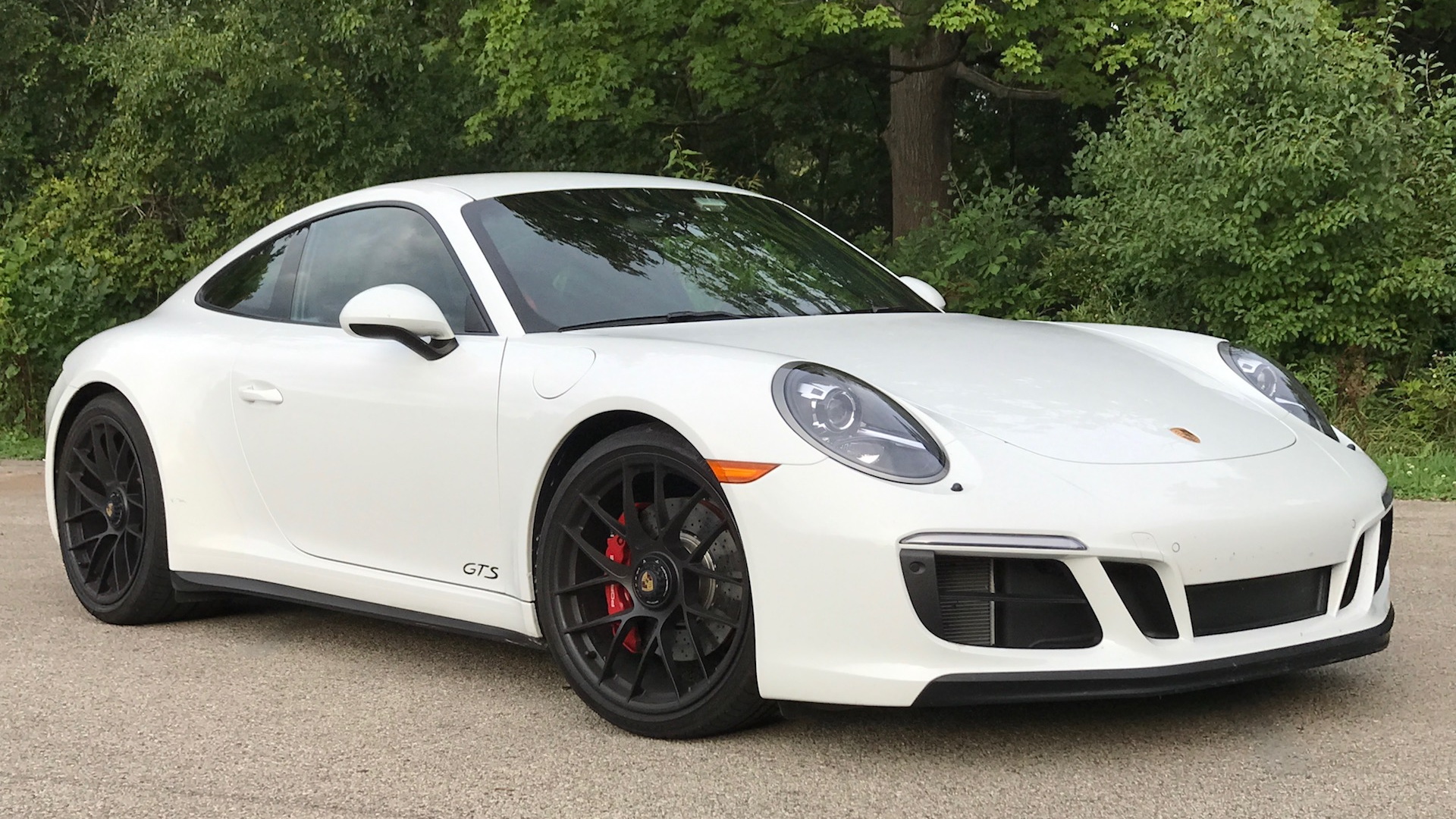 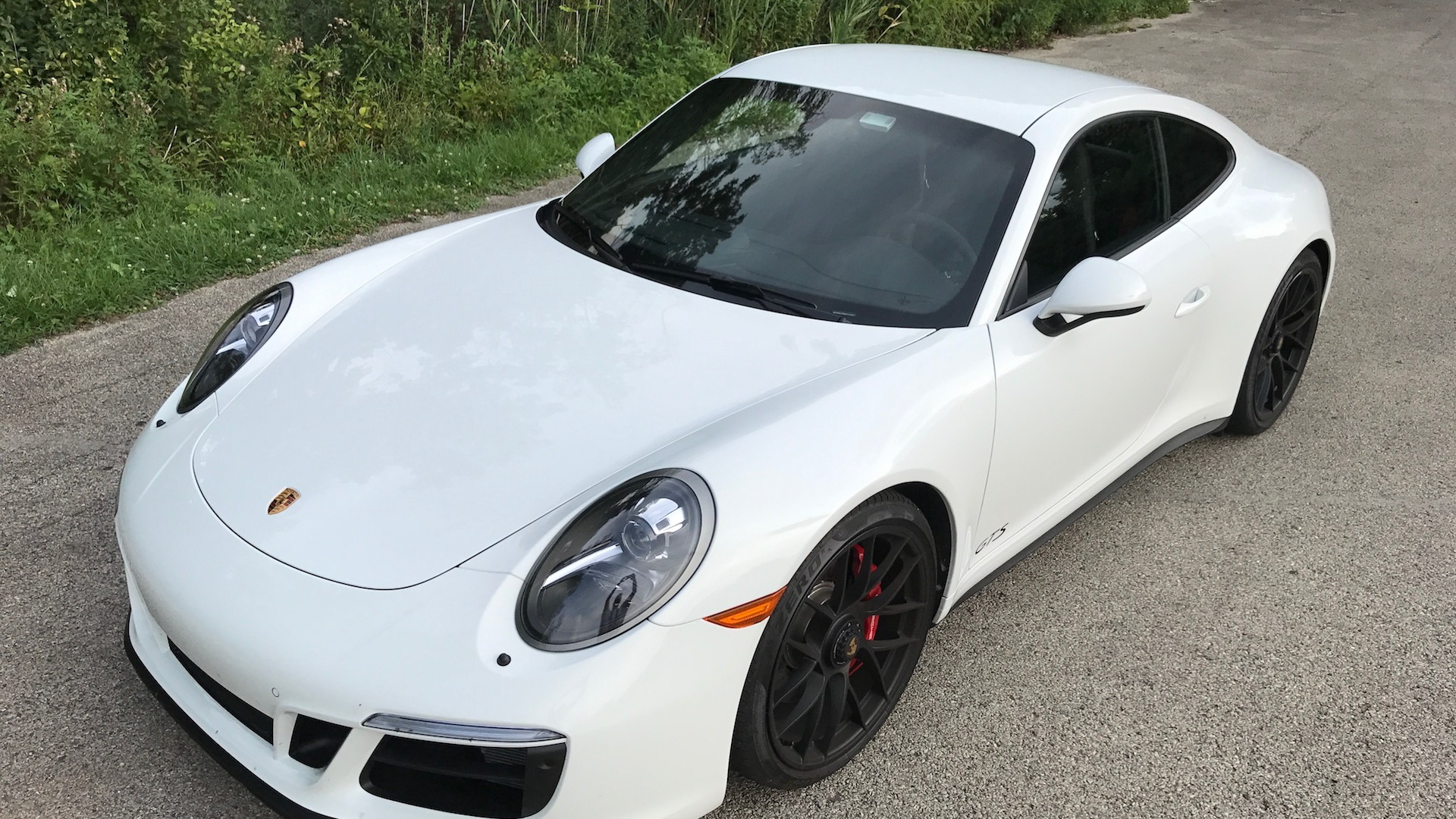 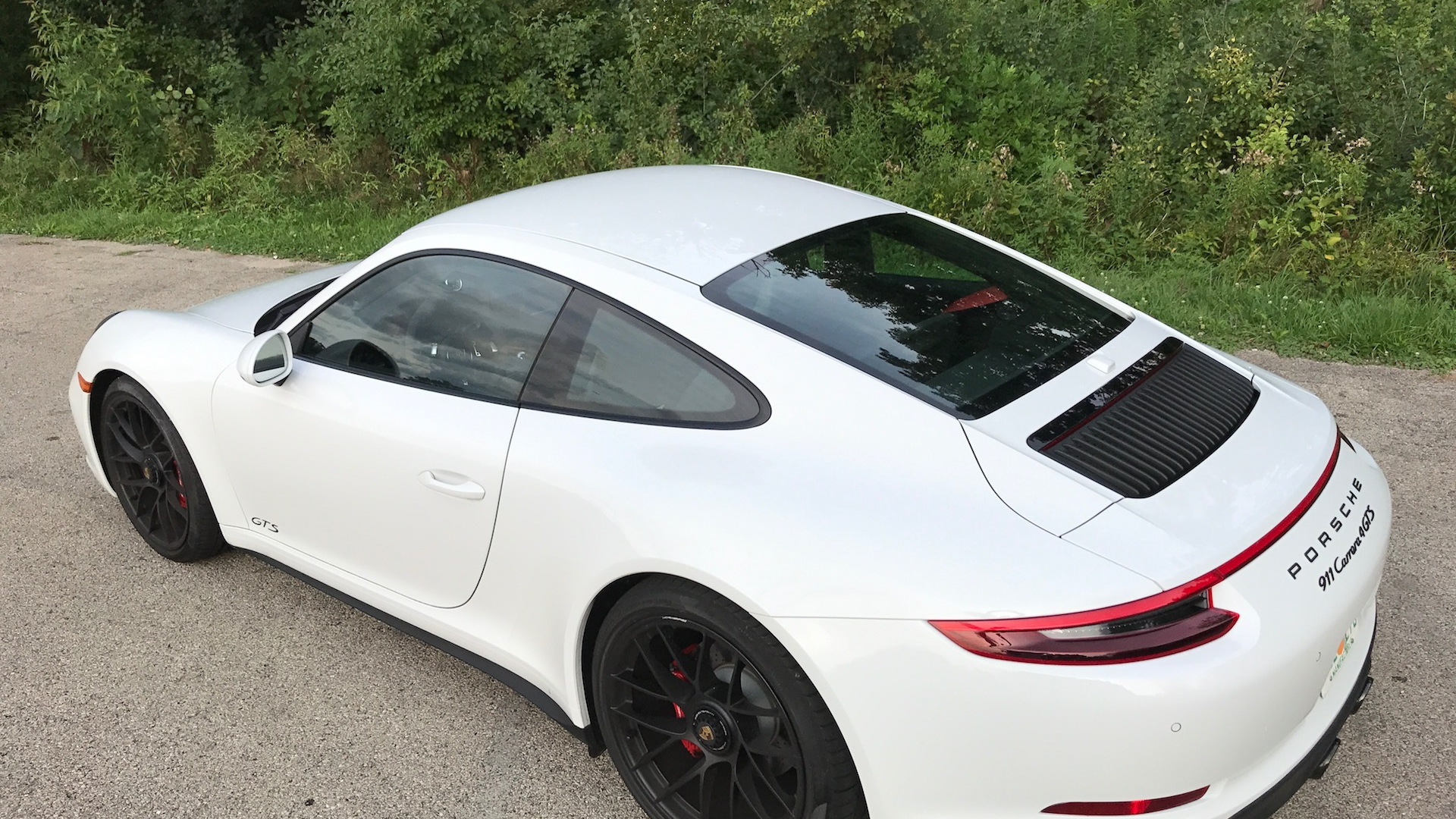 Life gets in the way, even when you're behind the wheel of a 2017 Porsche 911 Carrera 4 GTS. Instead of zipping around scenic Lake Tahoe or pushing things to the limit on a South African racetrack, as we've been fortunate to do before, I just spent a week behind the 911 GTS' wheel through rain and shine, in gridlock traffic, on city streets, and even on a racetrack.

We've already come to the conclusion that the 2017 Porsche 911 GTS is the bargain 911 that you really want, but until now we've never lived with one.

As a refresher, the 911 Carrera 4 GTS is basically a well-optioned Carrera 4S at a discounted price. It comes with the power kit that ups the boost from 16 to 18 psi to add 30 horsepower and 37 lb-ft of torque to the 3.0-liter turbocharged flat-6, bringing the totals to 450 and 405, respectively. The power kit also includes the Sport Chrono package and the Sport Exhaust. All told, that is a $12,350 value. The only other mechanical feature is the PASM Sport Suspension, which is an $890 option on the 4S.

Exterior appearance options that are included consist of the Sport Design front fascia and exterior mirrors, black logos, the model designation on the doors, tinted taillights, and satin black wheels. Inside, it features the Sport Seats Plus option, the GT Sport steering wheel, and an Alcantara storage compartment lid.

All told these features retail for $21,975, but Porsche charges merely an additional $13,900 for them, and that doesn't include the fact that the car comes with the special center-lock wheels from the 911 Turbo S. These wheels aren't optional on the 4S, so Porsche can't put a value on them. However, Porsche does say that the GTS represents a 10 percent value over a comparably equipped S model.

Not that the Carrera 4 GTS is cheap. My tester carried a $126,950 base price, and it was packed with another $13,405 in options. They started with the $3,850 leather interior in black, which included the Alcantara GTS package in Carmine Red; the $4,120 GTS Interior package with carbon fiber trim, contrast stitching, and other uses of contrasting color; the $2,090 front axle lift system; the $3,025 Adaptive Sport Seats Plus (18-way) with Memory package, and a Premium package with heated front seats and auto-dimming rearview and side mirrors.

That brought the total for my tester to $142,945. However, a trip through the Porsche configurator shows that price increases since this one was built mean the same car now costs $144,670. Maybe not every GTS is exactly a bargain.

After more than 400 miles behind the wheel, I have some thoughts on what it's like to live with the 2017 Porsche 911 Carrera 4 GTS.

It's a sports car that you can drive every day.

Slung low and set on big and bigger 245/35 front and 305/30 rear Pirelli P Zero 20-inch tires, you might think the 911 GTS would ride like a buckboard. But somehow Porsche has introduced suspension compliance into the mix. The streets around my home in Chicago are some of the worst anywhere, but this car soaks up their abuse without turning occupants' innards to jelly. Sure, the ride is firm and you can feel those road imperfections, but they don't pound through like I thought they might.

The 18-way seats in my test car provided great comfort for a multi-hour drive to and from Michigan and the support needed for track driving. Even accounting for a reduction in sound deadening compared to the 4S, the car's overall noise level made it possible to conduct a couple of Bluetooth phone calls and listen to a "Game of Thrones" book on tape with only a little disruption when driving on louder concrete surfaces.

If I owned this thing, I'd drive it all the time. Well, probably not in winter, though the thought of putting winter tires on it and driving it when the snow isn't too deep is pretty enticing.

It's amazing on a track.

That trip to Michigan was for the annual Midwest Automotive Media Organization Track School at Gingerman Raceway in South Haven. I was there all day as an instructor for less experienced track drivers, but at lunch I snock Porsche on the track for about five laps.

The turbocharged engine is a delight, delivering far more mid-range acceleration than the naturally aspirated engine of old. It rockets this car from 0-60 mph in 3.8 seconds with the manual transmission, and doesn't have a weak spot across the rev range. The manual shifts easily and positively, with natural clutch action, and when you put the mode selector in Sport+, it provides rev-matched downshifts that are quite helpful on a racetrack.

Dynamically, the 911 is made to handle a track. It's hunkered down and sticks to the pavement like a vacuum cleaner. The steering is quick and precise, and the car turns in crisply. At the limit, the handling is neutral, despite that mass of engine out back, and the optional rear axle steering helps it rotate through Gingerman's tight corners.

Since this car came with the Sport Chrono package, I used the stopwatch to time some laps. I was disappointed that I wasn't able to simply set a starting line and let the system do the work. By the time I figured out that I had to hit the stalk to mark each lap, I was only able to time two laps. My best time was a 1:43.01, which is the fastest I've ever gone around Gingerman. With the chance to get more laps under my belt, I'm sure I could have cut a second or two from that time.

And the best part? You can drive this car to the track in relative comfort, flog it hard, then drive it home, and it will handle the abuse just fine, thank you. That's Porsche engineering for you. Alfa Romeo could learn a thing or two from that.

This is a great swan song for the 991 generation.

It's hard to believe that the 911 generation is soon coming to an end. After driving this car, I don't really see how the next generation can get better. It feels like you are basically driving a race car tub with the engine out back, but the car is compliant, Porsche's suspension magic overcomes what is certainly a naturally tendency toward oversteer, and the turbocharged engine provides willing, tractable power for any need.

In the end, I loved my week in the Carrers 4 GTS, but I didn't love the sticker price. We've called the GTS the car to buy, and we'll stick by that for the better-funded Porsche buyers. But the base 911 has the same basic goodness without as many amenities or performance features for $50,000 less. I'm thinking that's the other 911 to buy.