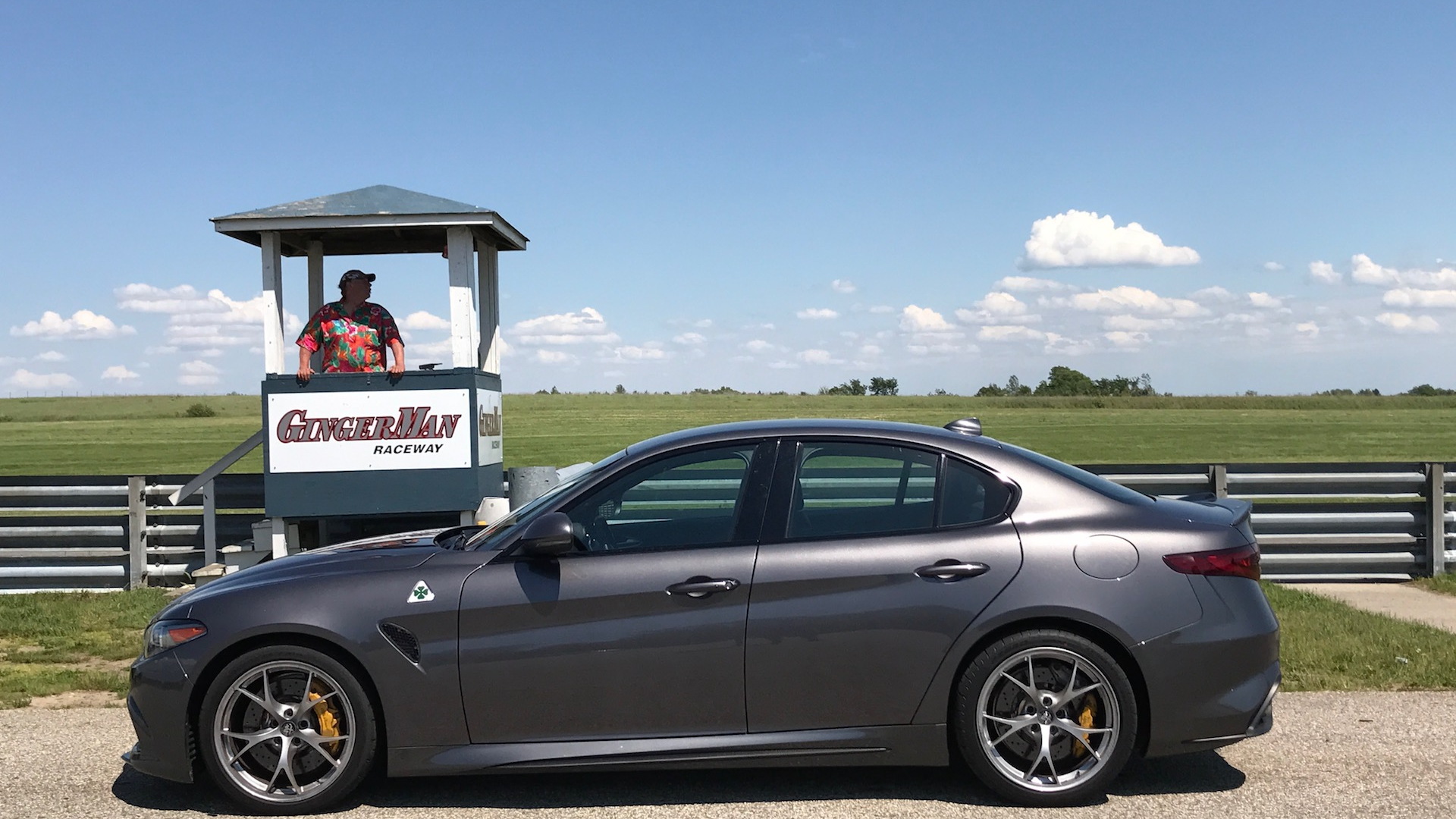 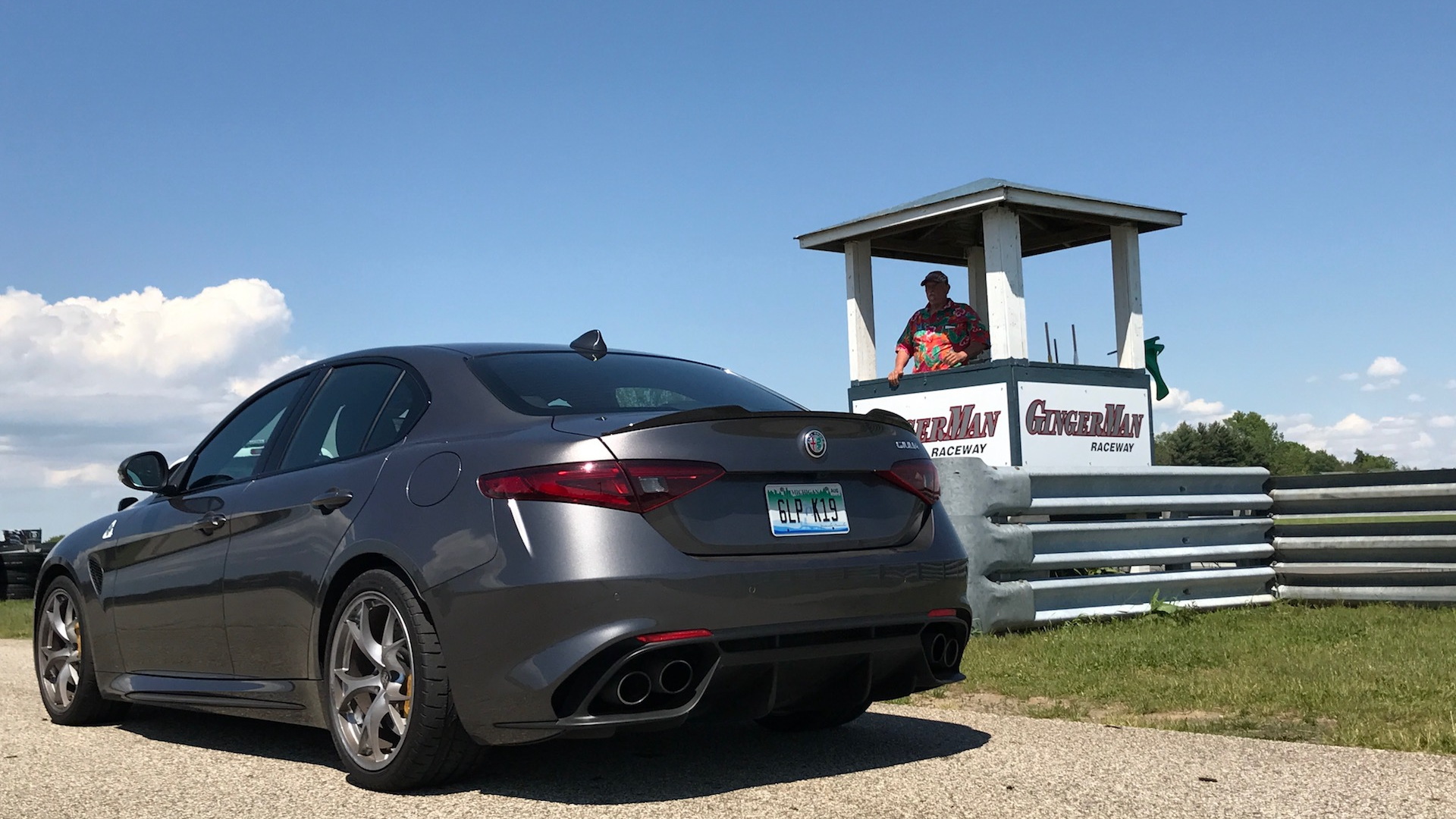 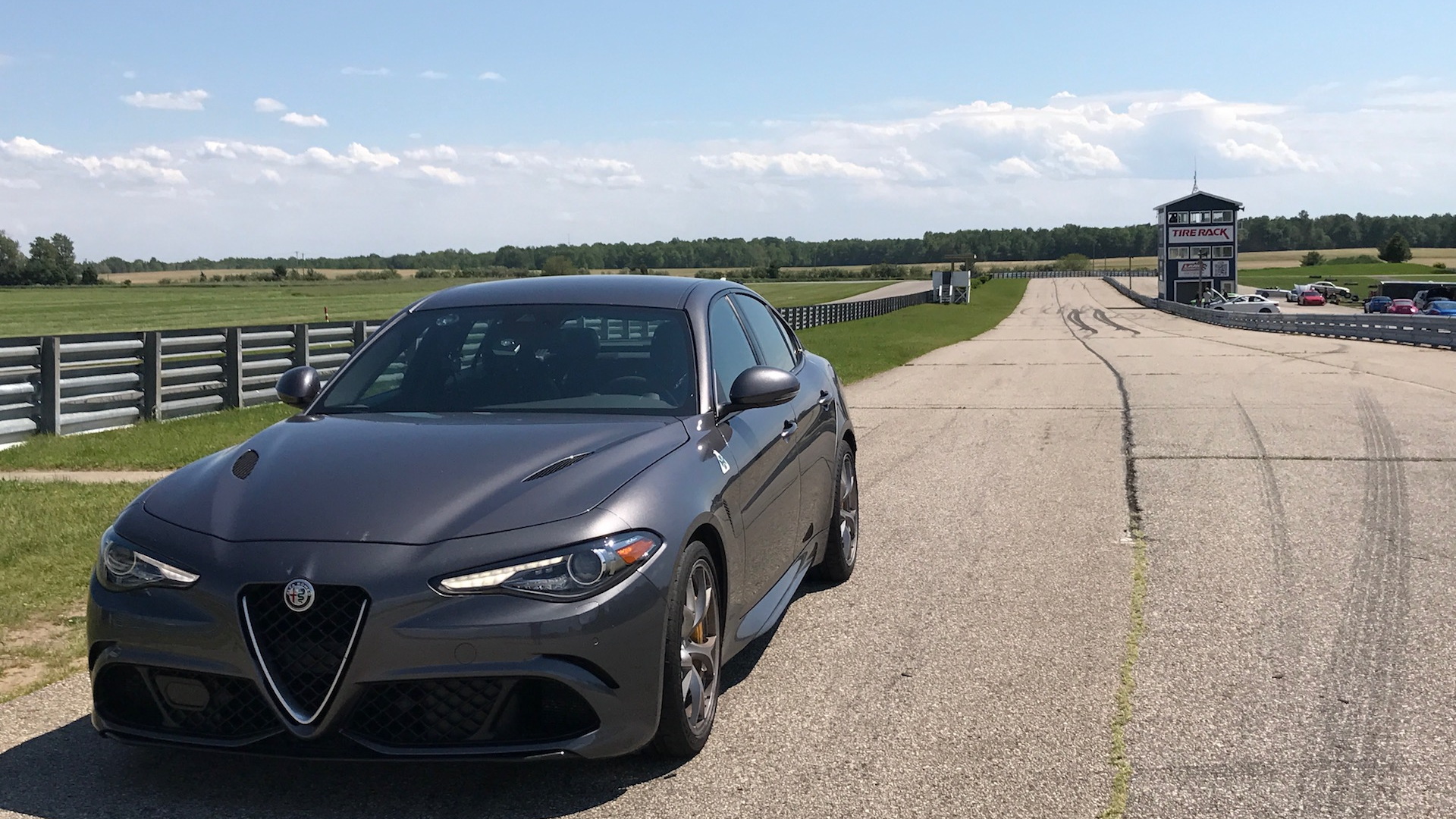 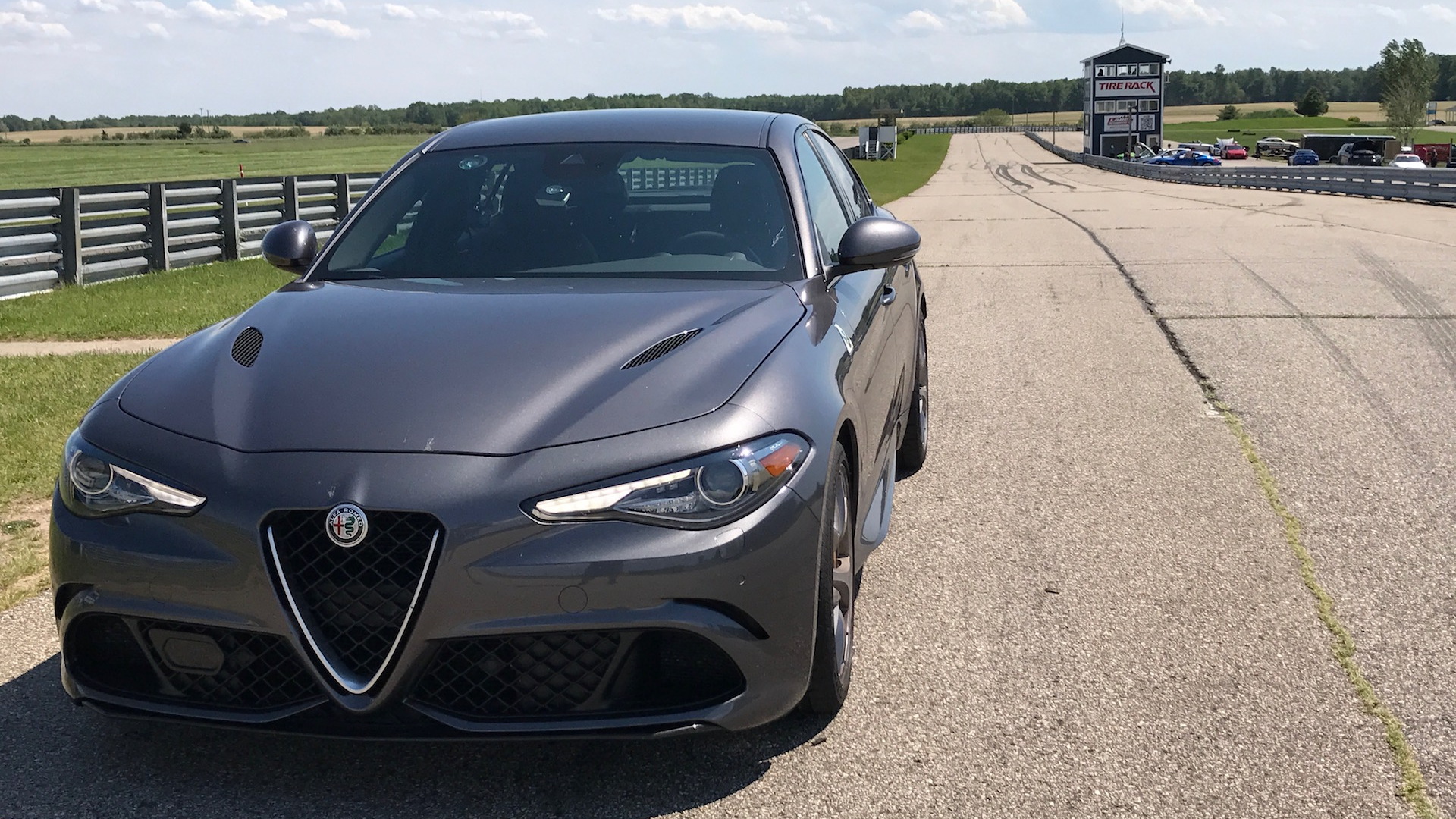 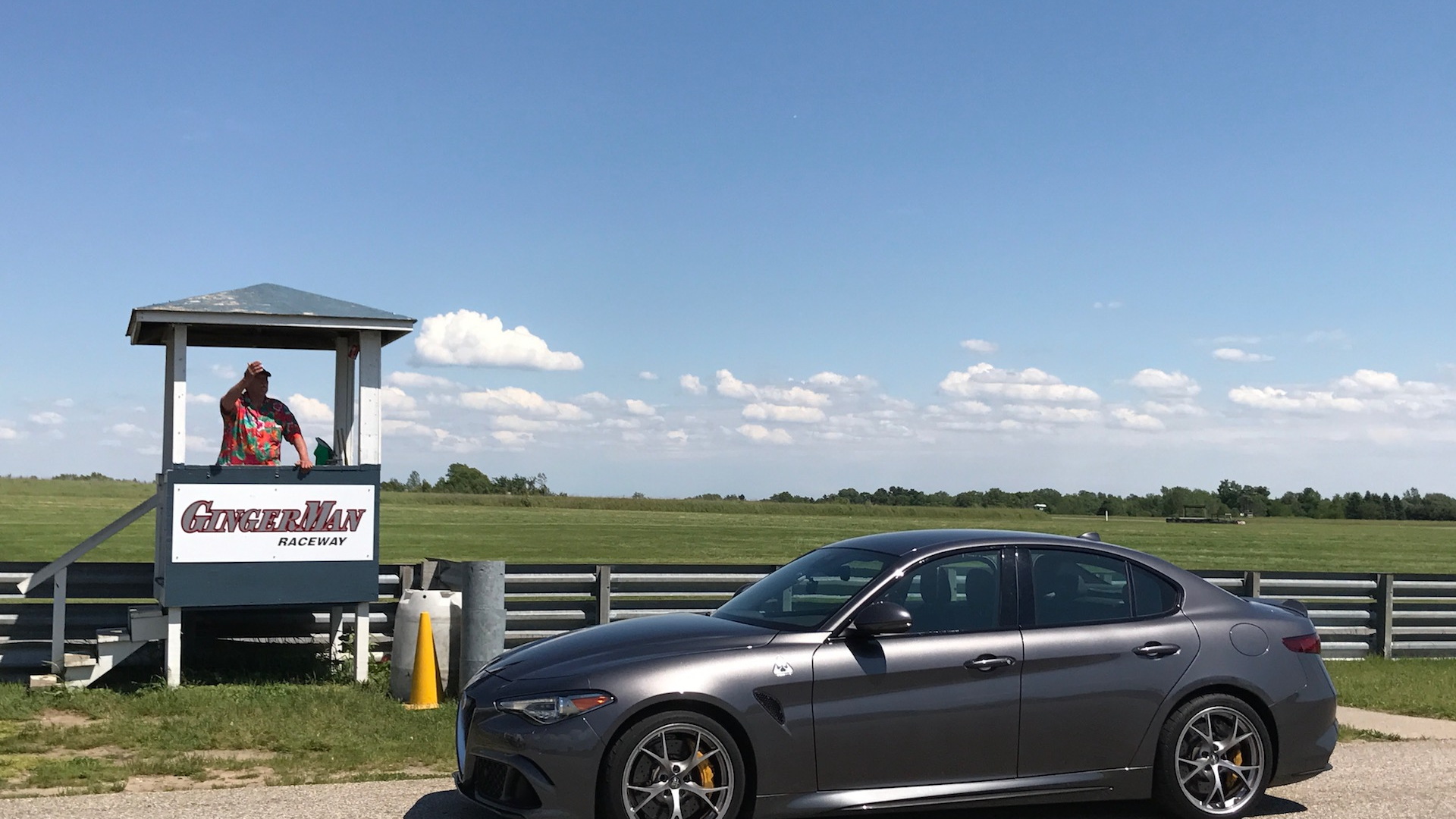 Italian cars are known for two things: driving passion and a finicky nature. So when I finagled my way into a 2017 Alfa Romeo Giulia Quadrifoglio for a track day event, I was hoping that I would experience the former and avoid the latter.

Instead I got a healthy dose of both.

On Memorial Day, I was part of a private group that attended a track day in western Michigan on Gingerman Raceway's 11-turn, 2.14-mile road course. The Giulia Quadrifoglio in question came with a $72,000 starting price; Vesuvio Gray Metallic paint for an extra $600; an air quality system ($250); the Driver Assistance Launch package ($1,200) with forward collision warnings, lane departure warnings, automatic high beams, and an infrared windshield; a cargo net ($150), the Harman/Kardon premium audio system ($900), the killer 19-inch bright 5-hole wheels ($400), yellow calipers ($500), and a $1,595 destination charge for a total of $77,595.

CHECK OUT: 2016 Ford Focus RS first drive review: The hottest of the hatches

Since none of our Motor Authority editors have driven the Giulia Quadrifoglio on a closed course, I approached Alfa Romeo about getting the car for this track day way back in February. Alfa agreed, but as the day neared, the reality hit me that I would be driving a possibly fussy Italian car on a 270-mile roundtrip from my home in Chicago to the track in South Haven, Michigan, and subjecting it to five or six 15-minute stints around the track.

When I arrived at the track, I decided to keep my outings to 10 minutes—essentially five hard laps with some additional time for a cool-down lap. I decided to leave a good 20-30 minutes between sessions to give the car enough time to properly cool down before taking it out again.

It didn't take long on my first stint to learn that this car is special. The turn-in is astounding, aided by the lightning quick 11.8:1 steering ratio, which is the fastest that I know of for any car on the market. Perhaps some supercars are quicker, but it's certainly the quickest in any sport sedan. The Alfa simply carved through corners, but only when I got the speed under control. It's easy to over drive this car into a turn, and make the front end wash out, despite the sticky Pirelli P Zero Corsa Asimmetrico 2 tires. At 245 millimeters wide up front, I get the feeling that they could be wider, and the combination of speed and laser sharp turn-in makes them susceptible to understeer despite their glue-like 60 treadwear rating.

Get that speed under control, however, and the Quadrifoglio's handling turns very neutral, letting you play with the balance via the throttle pedal mid-turn. During my first couple of sessions, I was just learning to do this in the 5-6 "Deep Demon" double apex, the turn 8 carousel, and the turn 9 "Wiggly Field" right hander that lets you carry a lot of speed into turn 10B.

The way the car accelerates is also intoxicating. Yes, it makes its best power over 4,000 rpm, but in Dynamic mode the 8-speed automatic stays in as low a gear as possible, keeping the 2.9-liter V-6 in its power band. Squeeze the throttle exiting a turn and the car slingshots forward, building speed quickly. At the end of the longest straight, it hit 128 mph, 4 mph faster than the ATS-V I had here two years ago. The low-pitched sound is also like nothing else on the market.

I had no issue modulating the brakes despite the fact that this is a brake-by-wire system. On a track, you brake hard to get your speed under control for that next corner. I had a few minor issues on the street with pedal modulation, but this system isn't bad.

During my second stint, I started to play with Race mode, which shuts off the stability control and leaves the shifting up to the driver. Alfa fits what must be the largest shift paddles on the planet, so reaching them is no problem. I still wasn't entirely comfortable with the car's handling, and I didn't like the fact that the digital speed readout had given way to a gear indicator, so I soon switched back to Dynamic mode, thinking I'd try Race next time. By the way, that gear indicator also includes a shift light, but Alfa Romeo's graphic should make it more obvious when to shift. I don't want to have to concentrate on the shift light when driving on a track.

A check of the GoPro shows I was turning consistent 1:49-1:50 laps, perhaps dipping into the 1:48 range. That's a bit of a disappointment, as I got into the 1:46s with the ATS-V. However, steering feel isn't this car's best friend and I was still getting a feel for car's limits of grip. Had I more time in the car, I'm sure I would have been able to take advantage of those sticky tires, carry more speed into those aforementioned corners, and taken the lap time down to the 1:46 or even 1:45 range.

Alas, that was not to be.

The disappointment came on the first lap of only my third stint. After just two turns, it flashed a message that the brake fluid was low. Within a couple more turns, the car started spitting out maintenance message after maintenance message, and by turn 9 it went into limp mode. I shut it down and headed into the pits, hoping 30 minutes of cool down would correct any issues.

After about 20 minutes I was down to just two codes. That's when I decided to disconnect the battery to try to reset the computer. I did that, waited 10 minutes or so, and reconnected the cables. The result? All the codes came back.

Well, that was it. My day was done. My worst fears were realized. This brilliant, finicky, exotic, Italian car did just what I feared it might. It thrilled me for two track sessions, then decided I wasn't worthy and that it didn't want any more track time.

At least none of the issues was mechanical, and I was able to drive it home.

I called Alfa Romeo communications department to inform them of the issue. A PR representative said that this particular car was a very early build and it might still need some of the kinks ironed out.

I just hope that some day I get a chance to really drive this car hard and see what it can do for longer than 20 minutes.