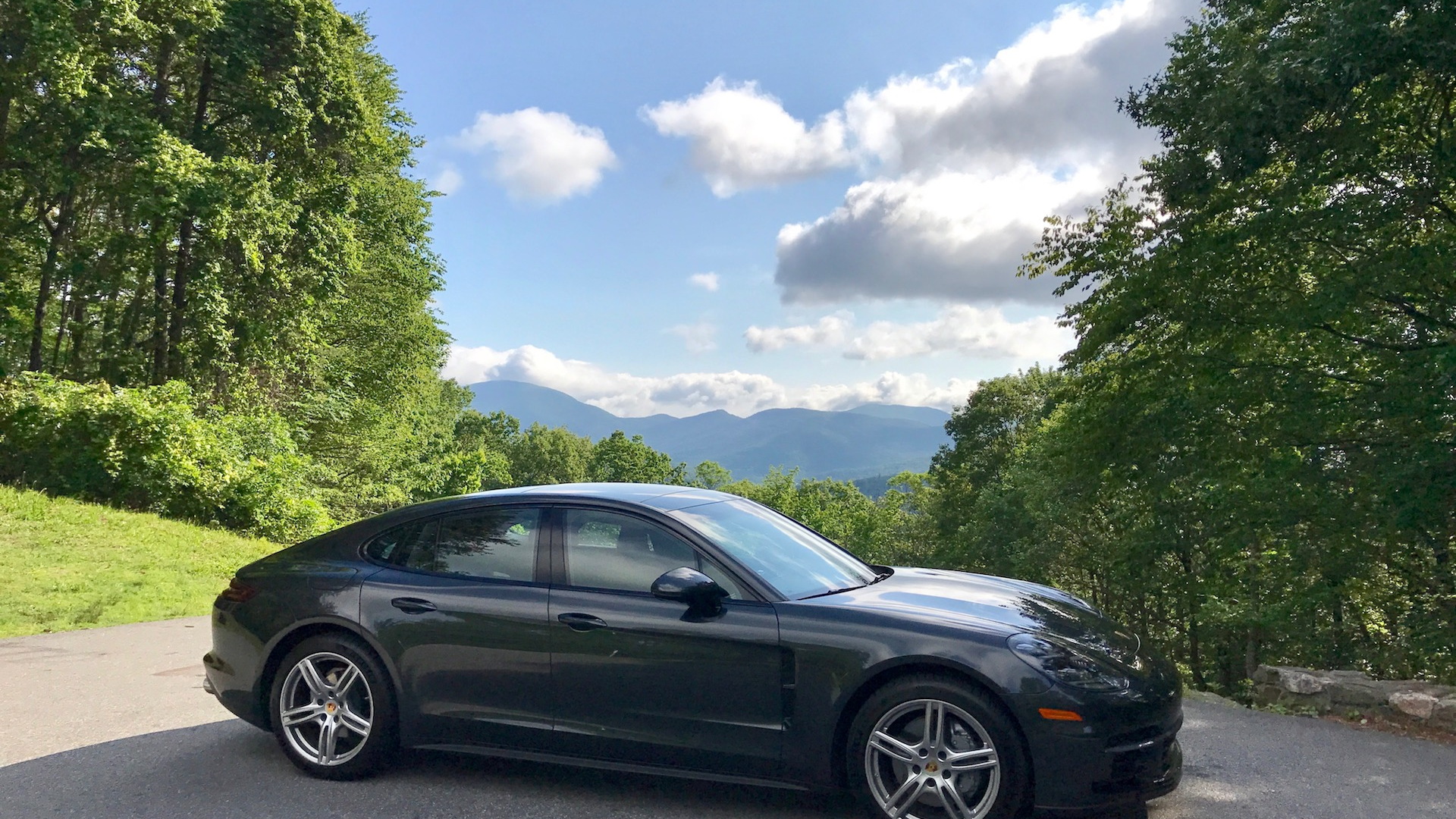 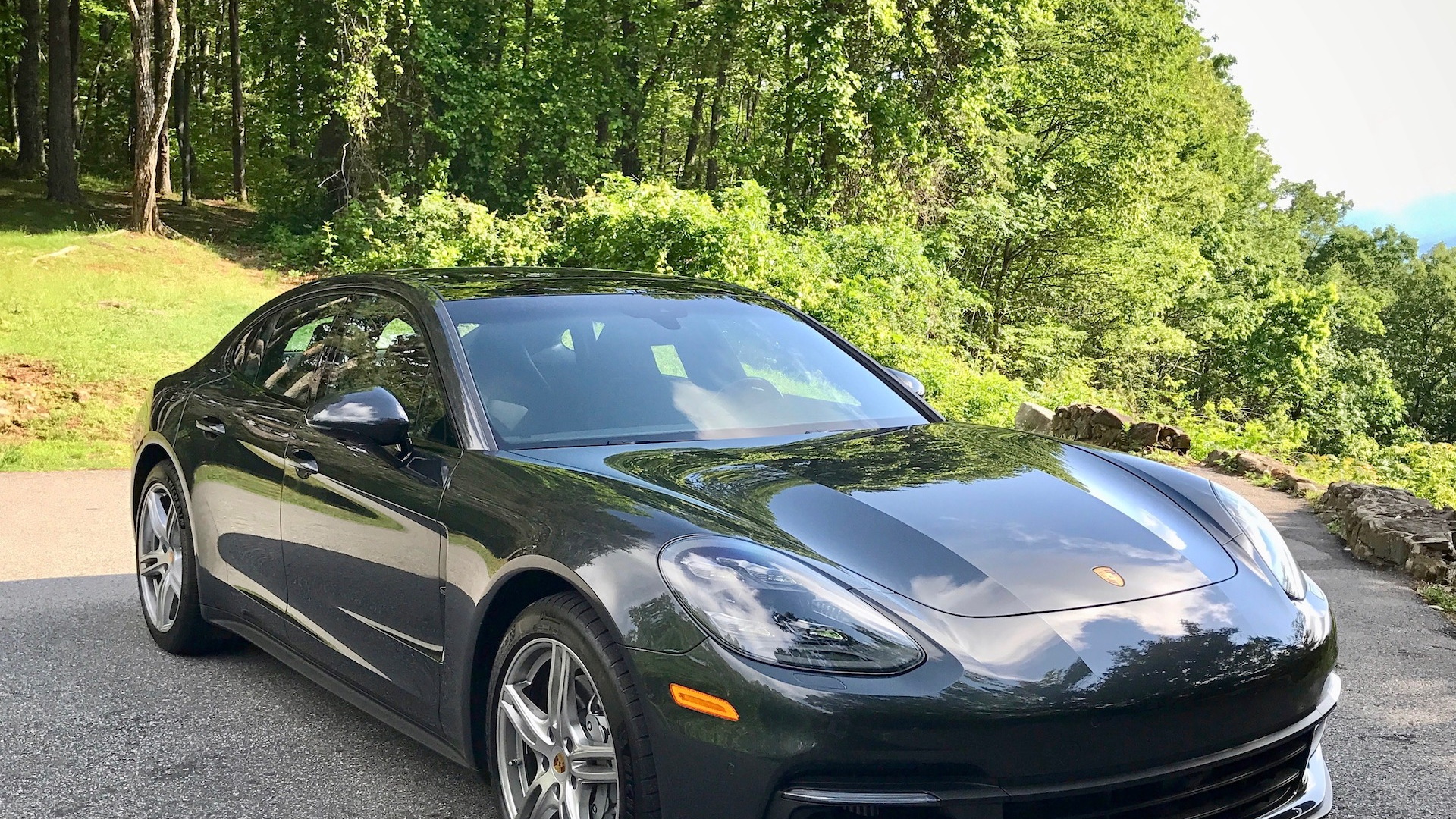 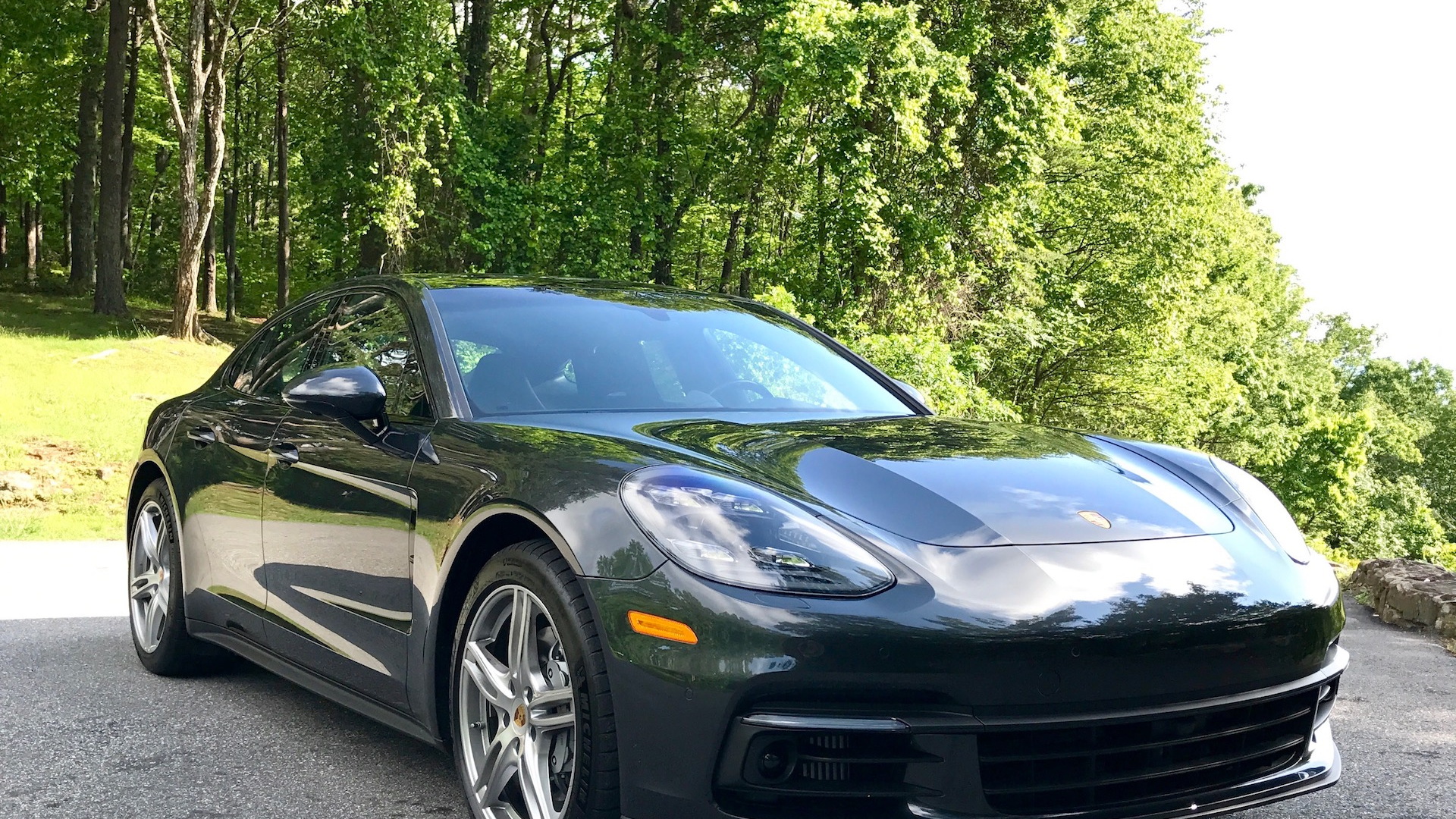 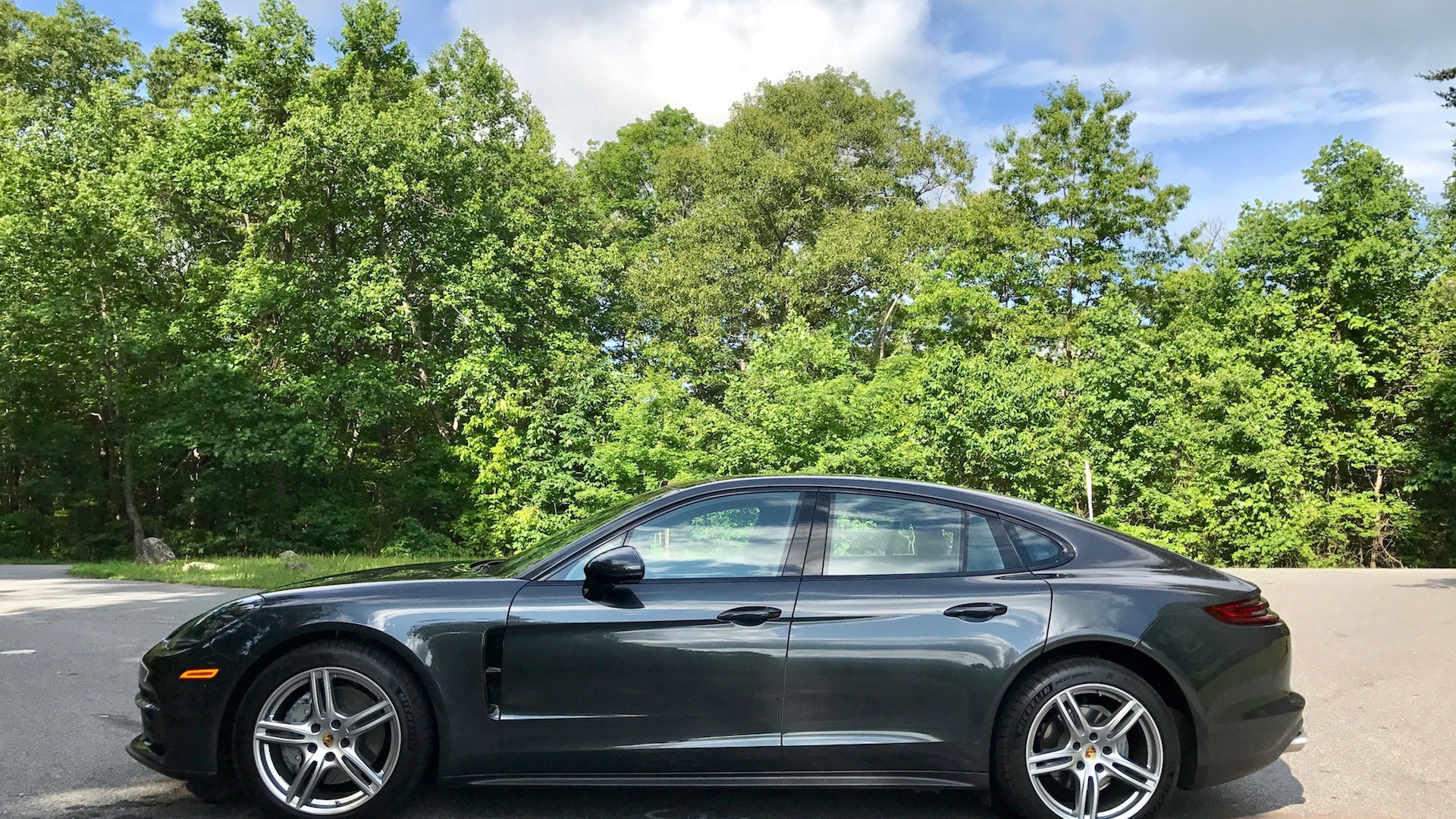 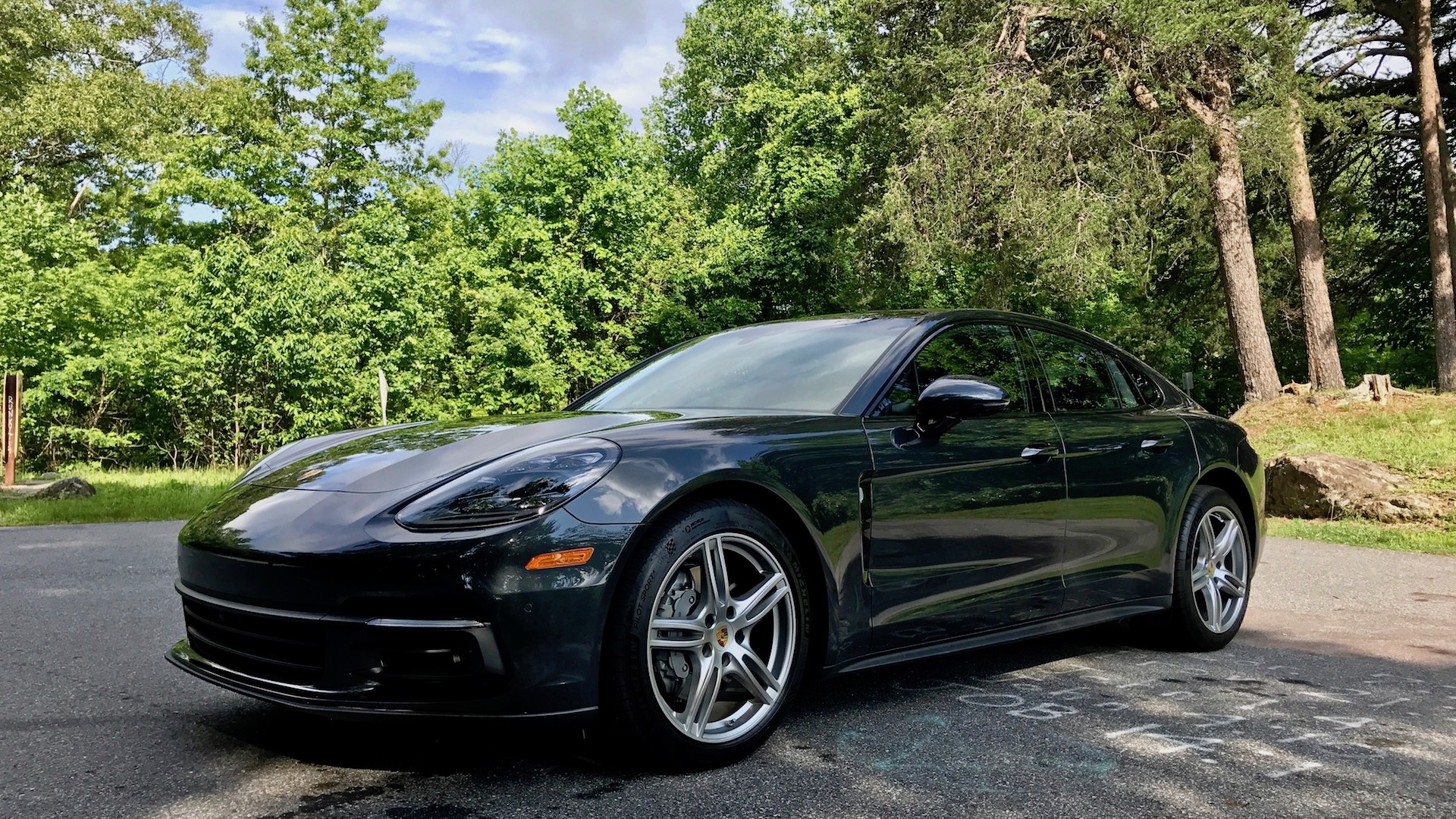 What’s a little heresy among friends?

Porsche put out its first Cayenne SUV in 2003, and oh, the hand-wringing, the garment-rending. The haterade flowed like Dom in the VIP room or so we’ve heard.

They forgot some keywords, like hugely profitable. Also, a real Porsche. Because brands are elastic, just like the socks the commenterati keep close to their mousepads.

Fast forward to 2010, when Porsche really stamped their passport to Hell with a no-return visa in the form of the Panamera. Or did they? The Panamera–which is also not a 911–didn’t even draw a complaint in the suggestion box. No Zuffenhausen engineer was sent to bed early, before Bernd das Brot.

Or maybe we have

Or maybe we have. That’s the optimist in me speaking, the same one that geegawed around the new Panamera that ceremoniously settled itself in the driveway last week. Scalding run for lukewarm coffee in the north Georgia hills? Capitol idea.*

The Panamera didn’t save Porsche from destitution, not like the Cayenne. It did some other neat things, like give fancy people a way drive something nearly as practical as an SUV without having to wear farm clothing.

Its secret: the Panamera gets snuggly-close to the usefulness of an SUV. It’s a voluptuous and voluminous hatchback, just like its poor country cousin, the Audi S7, a gorgeous car that’s rendered Cinderella pre-makeover by the imposing, athletically menacing Porsche.

The first Panamera turned heads, not always for the right reasons. Remember the roofline, allegedly drawn tall so a CEO could fit in back? Its outre otherness felt like VWAG’s own Citroen-Maserati, but from some angles it looked every bit like design by fiat.

This new Panamera matures that shape, and bends the roofline to more agreeable angles. Some extraneous sculpting across its low hood aside, it looks exactly like what you’d have expected before we saw the first Panamera.

It limbos lower. The Panamera’s roof sits almost an inch closer to the ground. It spreads out more than an inch wider. It perches on a wheelbase 1.2 inches longer than before.

Porsche says the fly line–the one that moves your eye over its sinuous fenders–should remind you of some other car it builds. Any guesses? The linkage to the 911 is explicit, like the manual shift action that...well, let’s not get ahead of things.

A certain VW-ness creeps into the thickness of the pillars and their angles, but by the time the Panamera resolves it all with a slim line of taillamps at its extravagantly hippy rear fenders it’s forgotten.

It’s a turbo, but not a Turbo

While you’re carspotting, know this Panamera 4S has some fillips to distance it from the Turbo. Yes it has turbos, but before we kill some joy, the 4S has a single-piece deployable spoiler and round pipes. Herculean Turbos have a two-piece spoiler and trapezoidal outputs.

So if I blazed by you and you thought even more of me, gasping for coffee in the pre-rush-hour gloaming of suburban Atlanta, good for both of us. I drove the 4S and wrung its twin-turbo V-6 out before the lunch rush at the Smith House claimed all its fried chicken, because priorities.

The Panamera lineup has spread its wings since its 2017 intro. The sedan comes as a Turbo, with a heady 550-hp twin-turbo 4.0-liter V-8 and all-wheel drive and a 3.6-second 0-60 mph time. A plug-in hybrid model seeds the ground for Porsche’s electric future (the Mission E is real, and coming).

Porsche stuffs the Panamera 4S with a twin-turbo 2.9-liter V-6, up 20 hp from the prior six for a total of 440 hp and 405 lb-ft. Peak torque hits at 1,750 rpm and doesn’t let up until 5,500 rpm, a compelling plateau not unlike the one reached by the second season of “The Walking Dead.” This one arrives more quickly: the 4S launches to 60 mph in 4.0 seconds when it has the Sport Chrono package, and hurtles to a 179-mph top speed, typical V-6 whammering noises playing accompaniment to its 6,800-rpm redline.

No manual here, just a brilliant automatic. Leave the new 8-speed dual-clutch automatic in Manual mode, and the Panamera 4S lights off that redline like a Zambelli family July 4th picnic. Porsche wins the dual-clutch programming gold, though the 4S wants to start in 2nd and aggravates the lumpy around-town cycling of these gearboxes.

Tickling the cool-touch paddle shifters calls up ever-quicker shifts through its different drive modes. The top two gears give it overdrive legs, and if you’re brave or dumb or both, top speed arrives in 6th gear. The cops may briefly be interested in that detail.

With Sport Chrono, a punch of the button in the middle of the sport-mode selector yields a 20-second hit of driveline crack. Shifts get faster than in Sport+ mode, the 4S strains at the leash, then it relaxes after you’ve disassembled some traffic. Hit it again. And again. This nurse responds when you hit the call button.

Diddle through the Panamera suspension-options list and you’ll wonder if you’re actually raiding the Stuttgart secret-weapons division. Am I supposed to be in here? The guy out front said we could be in here.

Along with torque-shifting all-wheel drive, the 4S stocks lightweight pieces to help it stick to the ground or peel sections of it away when duty calls. In front, it peddles aluminum double wishbones with a hydraulic damper on the bottom wishbone, and a subframe for suspension and steering to isolate for better tracking. The rear has wishbones too.

All Panameras come with electronically controlled dampers that toggle via a slick console screen, but this is Porsche. When in doubt, add grip and complexity. A torque-vectoring rear differential knows when to give one tread more attention. Rear-wheel steering moves those tires up to 2.8 degrees in the opposite direction of the fronts below 30 mph, because parking at Costco is apparently a new black magick.

The logic is the long, 4,123-pound Panamera 4S needs mechanical help to pivot its way with the deft touch of a 911. They’re right. Let loose all the purse strings and opt the 4S up from its stock 265/45ZR-19 front, 295/40ZR-19 rear treads to 20s or even 21s, and length and wheel weight start to play dirty tricks with tracking and turn-in.

The counter-conspiracy comes in the form of a slew of sensors that watch yaw, acceleration, and rise. They tell the AWD system, the dampers, the rear-steer, the torque-vectoring, and the transmission and throttle all how to raise an insurrection without unsettling the car mid-corner.

Electronic controls and virtual brains have ruined some cars we used to love, but not Porsches. The Panamera can seem slow to steer because it’s long, but in any of its drive modes, it carries itself with well-managed tension. It can pivot through esses, damped perfectly, in a way that makes SUVs seem even sillier as a form factor.

The Panamera hatchback doesn’t swallow as much as an SUV, of course. There won’t be any jamming of college-grade furniture with unpronounceable names in any prolapsed cargo hold. Every religion’s god invented a form of U-Haul for a reason. Even atheists are in on that one.

Until the Panamera Sport Turismo finally takes fleshy form, this Panamera does the trick. Four tennis bags with clay-soaked shoes fit with the rear seats up. If only the Aston Rapide were this useful! Porsche counts 17.4 cubic feet back there, and folding down the back seats opens up 46 cubic feet of space.

That back-seat space seems mildly less open than before. It’s a trade-off well worth the gains in style. The greenhouse sits closer to my sidehead and the panoramic glass does too, but knee room is plush and the twin-door center console came slathered in carbon-fiber trim.

I spent about five seconds back there, because the driver seat felt as great as the Recaro office chair at my desk, with the addition of 14-way adjustment and real leather. Otherwise, the Panamera felt just like sitting at a desk, now that its hundreds of buttons have been reduced by 90 percent. In their place, sleek touch-panel surfaces pare down the console to a USS Enterprise sheen, while night-vision views and wide-screen navigation light up the dash with a diffuse glow. It’s a shining achievement, this refusal of chaos.

Panamera 4S discussions begin at $100,950, and end with the choice of which child doesn’t get to go to college.

All models get LED headlights, some leather, in-car wifi, parking sensors and a rearview camera, satellite and HD radio, and Apple CarPlay. The profusion of buttons on the steering wheel gives back some of the simplicity baked into the console. Rollers, switches, and toggles inside its rim and overhead on a console give direct access to most of the right functions, but OCD drivers will miss the seek button.

The beautiful 12.3-inch display for navigation makes up for the less useful one in the gauges. It’s sensitive to zoom, pinch, and swipe gestures, and it accepts handwriting. On another level, its landscape orientation seems like a timestamp that suffers as Tesla and Volvo show the way with portrait-style screens.

A degree of self-driving hardware lets the Panamera stop and go with traffic, and can change lanes when all’s clear.

Minor niggles of the lowest order include some shiny black plastic switches and stalks; a cruise-control lever that requires a push or pull to change speeds; an adjustable center climate vent with a mind of its own, or at least one beyond my comprehension, and the numbing realization I’ve become so spoiled that I sighed audibly when it showed up with Bose audio, not the revelatory Burmester 3D sound system.

It also had two things I’ll forever think of, during those blessedly infrequent moments when I think of the compromises Porsche’s made to put itself indelibly in the black.

The cupholders on this Panamera? One’s bigger than the other. They’re staggered, front to back.

*The first American gold rush descended on Dahlonega, Georgia, in 1828. Miners panned the gold that glitters on the Georgia State Capitol dome. It’s called a long way to go for a pun.