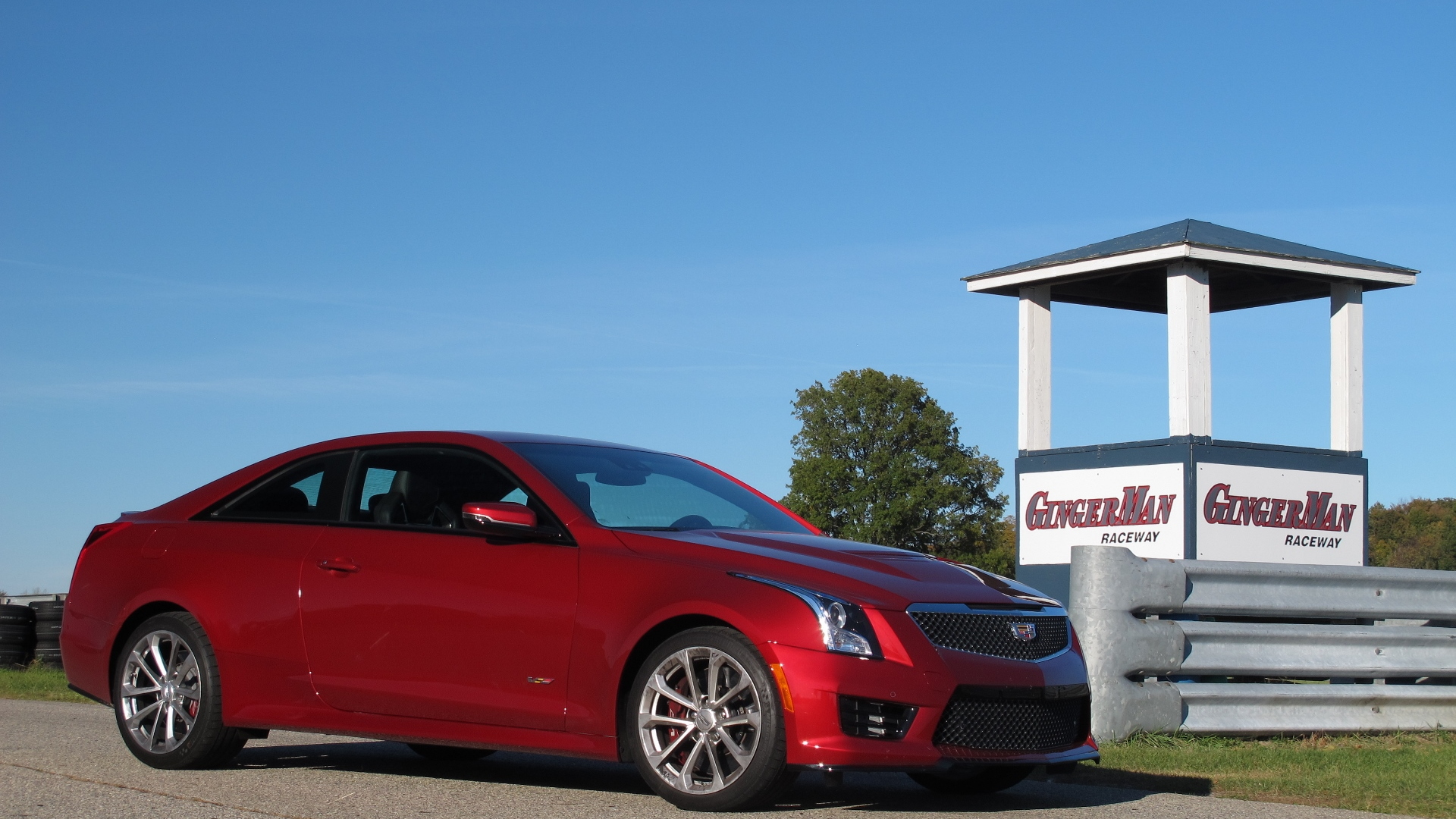 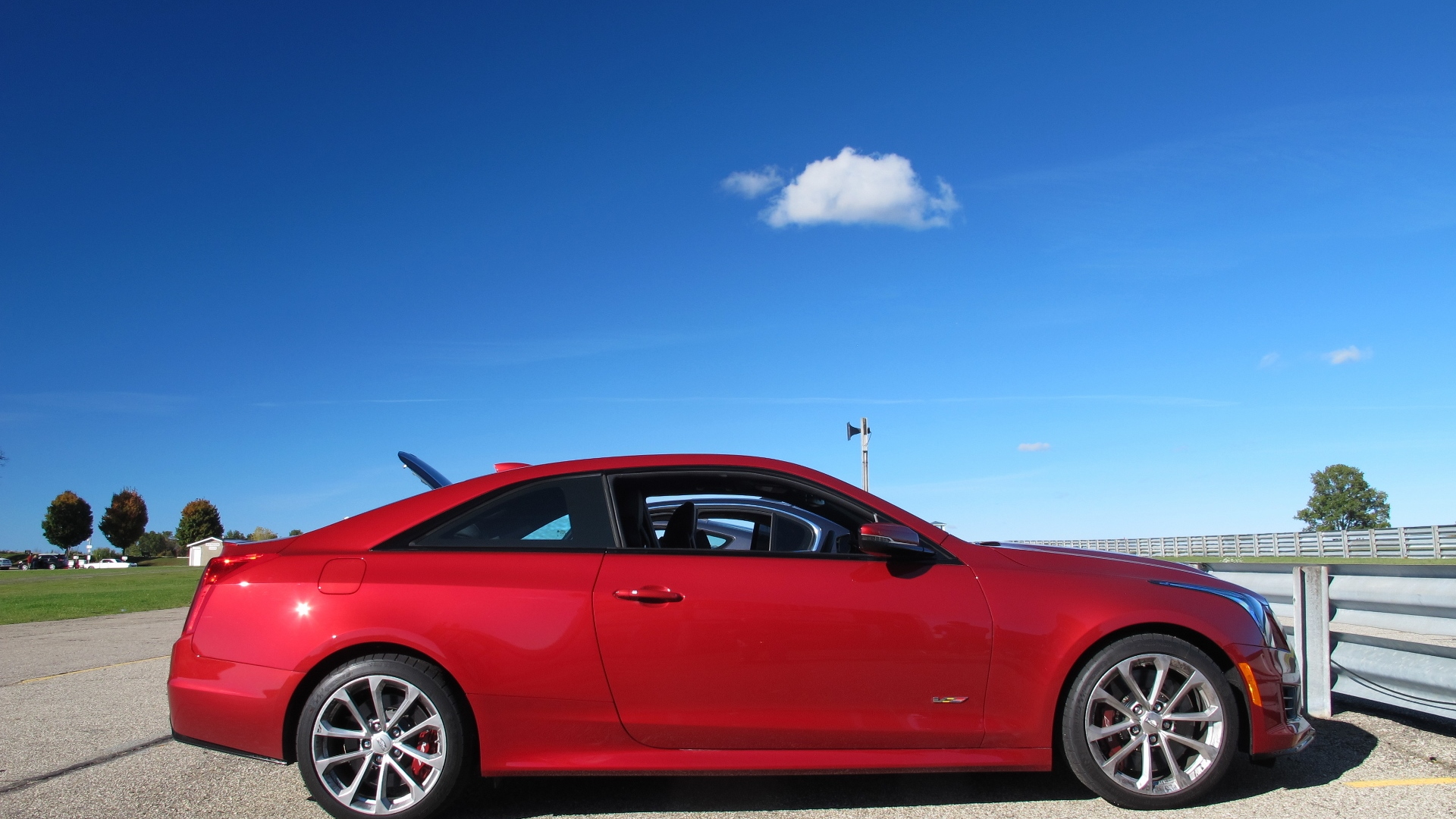 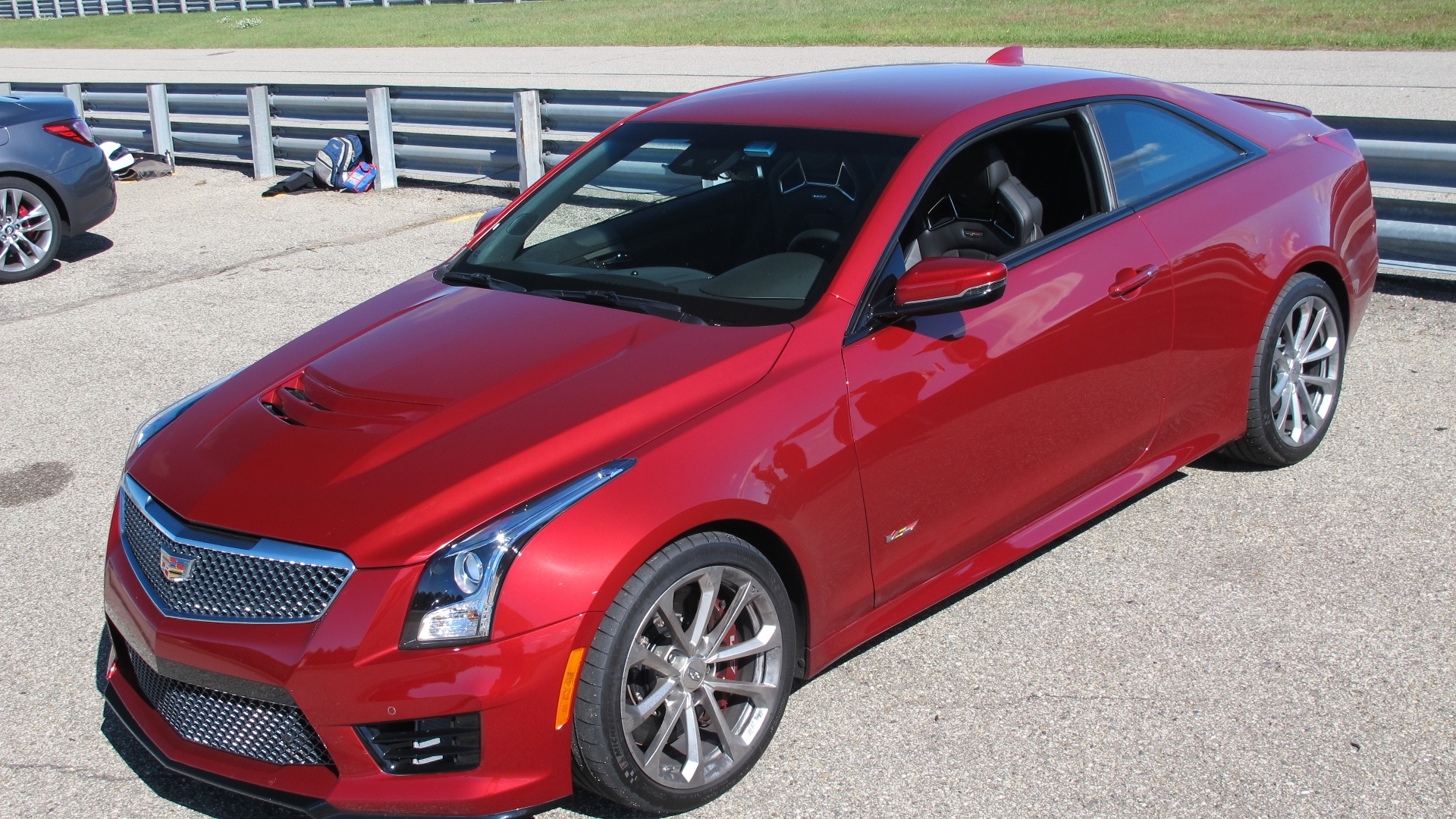 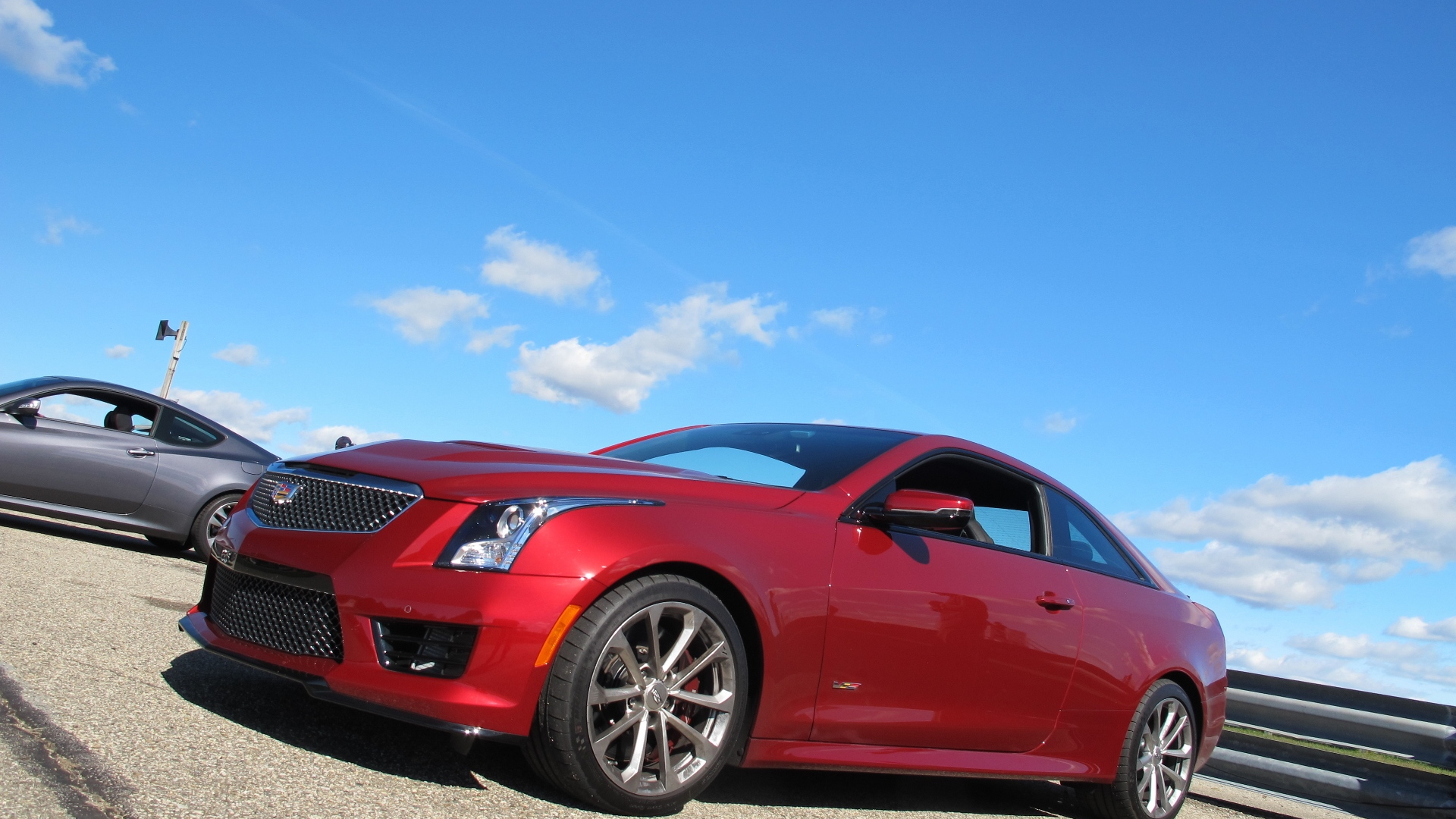 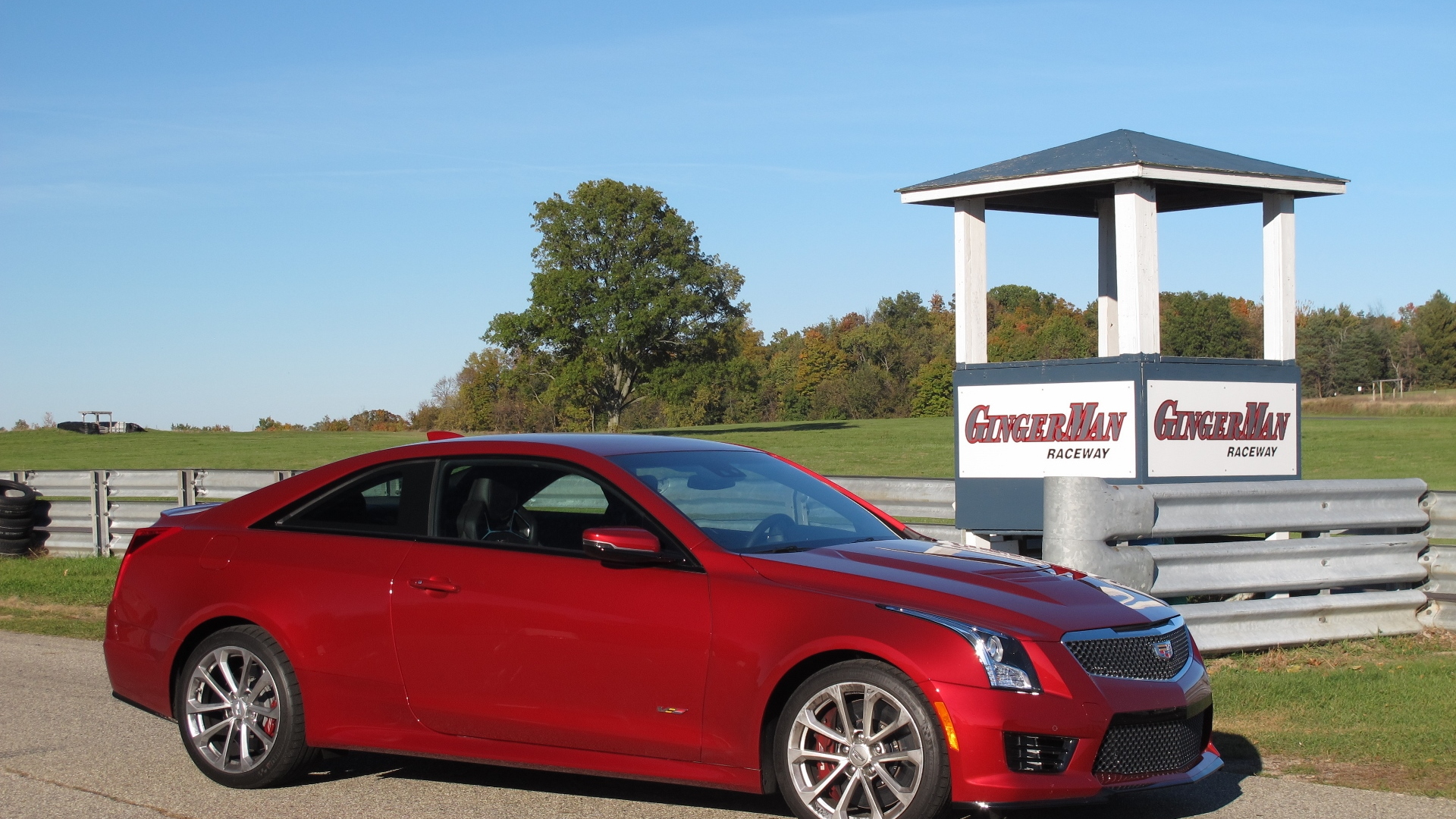 Sometimes it pays to "know a guy."

I know a guy who organizes occasional track days so he and his rowdy friends can spend a day thrashing their cars at extra-legal speeds.

I also know a guy who knows another guy at Cadillac who can hook me up with a car to take to said track. The hook up worked, and this past Sunday I was lucky enough to spend some quality time with a 2016 Cadillac ATS-V in western Michigan on Gingerman Raceway's 11-turn, 2.14-mile track.

All of the aforementioned guys shall remain nameless. They're my guys, after all. Get your own guys.

My test car was ideal: a coupe with the manual transmission, the Recaro bucket seats ($2,300), the Performance Data Recorder ($1,300), and assorted other items for a total price of $69,935. The car only had about 200 miles on the odometer when I took delivery, and I started my track shenanigans with about 600 miles on the clock. Automakers usually recommend taking it easy during the first 1000 miles, but this car received a rather harsh break-in period. I could smell the brakes after my first track session, and the pads left plenty of brake dust on the wheels, but otherwise, the car was no worse for wear at the end of the day.

The goal of the day wasn't to race. It was to have fun with performance cars in a safe environment. The track was open to our group of ten from noon to 5:00 pm. Of course, that didn't mean five straight hours of track time. Few race cars can handle that type of beating. To preserve the ATS-V and make sure I would be able to drive it back home, I limited my track time to five sessions of roughly 15 minutes each, including a cool-down lap. Given that hour and 15 minutes of track driving and roughly 550 miles of highway driving, I really got to know the ATS-V. Below are a few of the things I learned.

The chassis is spectacular.

Cadillac engineers aimed at the BMW M3/M4 when developing the ATS-V, and they may have overshot the target. While the BMWs are still great cars and may be a tad quicker around a track than the ATS-V, their ride has become harsh and I'd rather live with the Caddy. Its Magnetic Ride Control dampers do a great job of balancing track-ready stiffness and street-worthy compliance. The ATS-V is a smooth highway cruiser that delivers on the track, but somehow doesn't pound over Chicago's pockmarked streets.

Given its docile road manners, the track prowess is almost a surprise. The chassis is well balanced, offering crisp turn-in response and willing rotation. Push the car too hard into a corner and it will understeer, but all you have to do is lift off the throttle to get the front end to tuck in. The steering is quick and direct, and it provides excellent road feel. In short, this little beauty is a joy to drive no matter the surface.

The engine is strong, but not burly.

The ATS-V's twin-turbocharged 3.6-liter V-6 is a lot like the chassis. It's capable and strong, but not rowdy. The V-6 makes 464 horsepower and 445 pound-feet of torque, and delivers that power in a linear fashion. Instead of snapping your head back, the power just builds and builds. On Gingerman's longest straight, the ATS-V hit 127 mph. By comparison, a V-8-powered 2014 Ford Mustang GT could reach 120 at the end of that stretch. The ATS-V puts the power down well, too, thanks to a standard limited-slip differential.

The ATS-V makes the driver a hero.

When equipped with the manual transmission, the ATS-V comes with two features that make performance driving much easier. First is downshift rev matching. Activated by a pair of paddles on the steering wheel where, somewhat ironically, the shift paddles would be for an automatic, rev matching eliminates the need for heel-and-toe shifting. While I have logged thousands of laps on tracks all over the world, I have never mastered the heel-and-toe technique, and I would be very uncomfortable using it during a track session. This feature blips the throttle for me, preventing the car from getting out of balance when downshifting for a corner. Yes, it takes some of the control away from the driver and gives it to the electronics, but I appreciate it and so will many others.

The second feature is no-lift shifting. When accelerating under full throttle, you cab keep your right foot to the floor while shifting. You still need to engage the clutch, but this feature helps ensure that almost all shifts are well timed. It also takes some of the control away from the driver, but I'm alright with that.

The Performance Data Recorder is awesome.

Thanks to the magic of GM's Performance Data Recorder I was able to record my track sessions and track lap times. Owners so inclined can use that information to analyze driving techniques to achieve faster lap times. The system, developed with Cosworth, uses a 720p high-definition camera mounted in the windshield header, a microphone in the interior, and a telemetry recorder to capture information such as speed, steering angle, rpms, and lap times.

Thanks to the PDR, I am able to share my best lap in the lead video. As a bonus, I can share a second video that features a spirited run against a 2007 BMW 335i that's been tricked out with a bunch of Dinan parts. The owner estimates the BMW's horsepower at 484, but that may be a bit optimistic because the BMW, which weighs 300 pounds less than the Caddy, couldn't walk away in the straights and it gave up ground through the corners.

Even though I missed a Sunday's worth of NFL games, my time at the track in the ATS-V was totally worth it. The car was a pleasure to drive on both the highway and the racetrack, and the day went without a hitch. This is an incredibly rewarding car that, in my opinion, puts Cadillac in the same stratosphere with the German automakers in terms of engineering prowess.

When the day was done, my track guy invited me to future track drives. The next one will likely be next spring. Given how well the ATS-V performed, I'd like to put its 640-horsepower big brother, the CTS-V, through its paces. Hey Cadillac guy, what do you think?