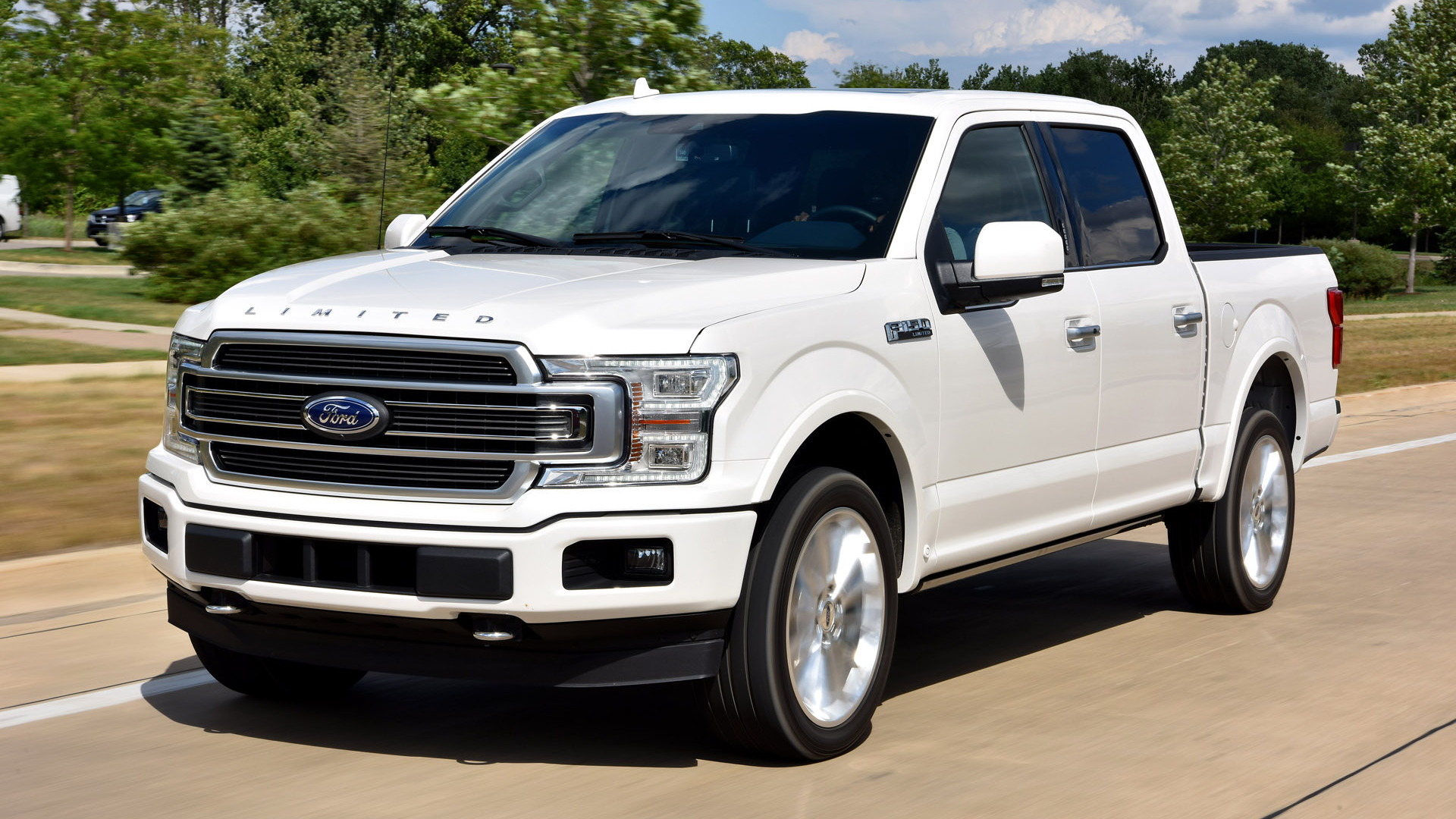 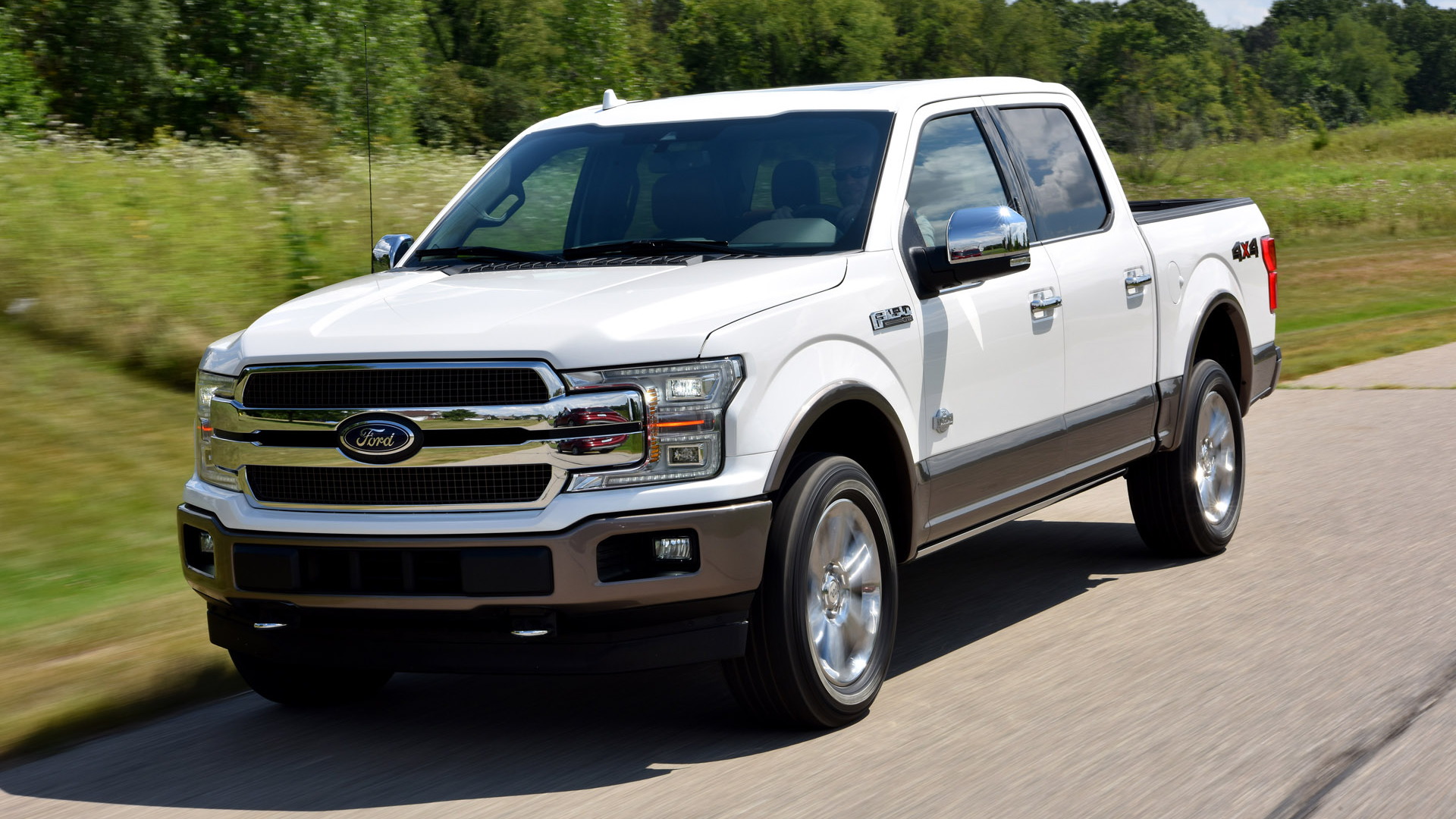 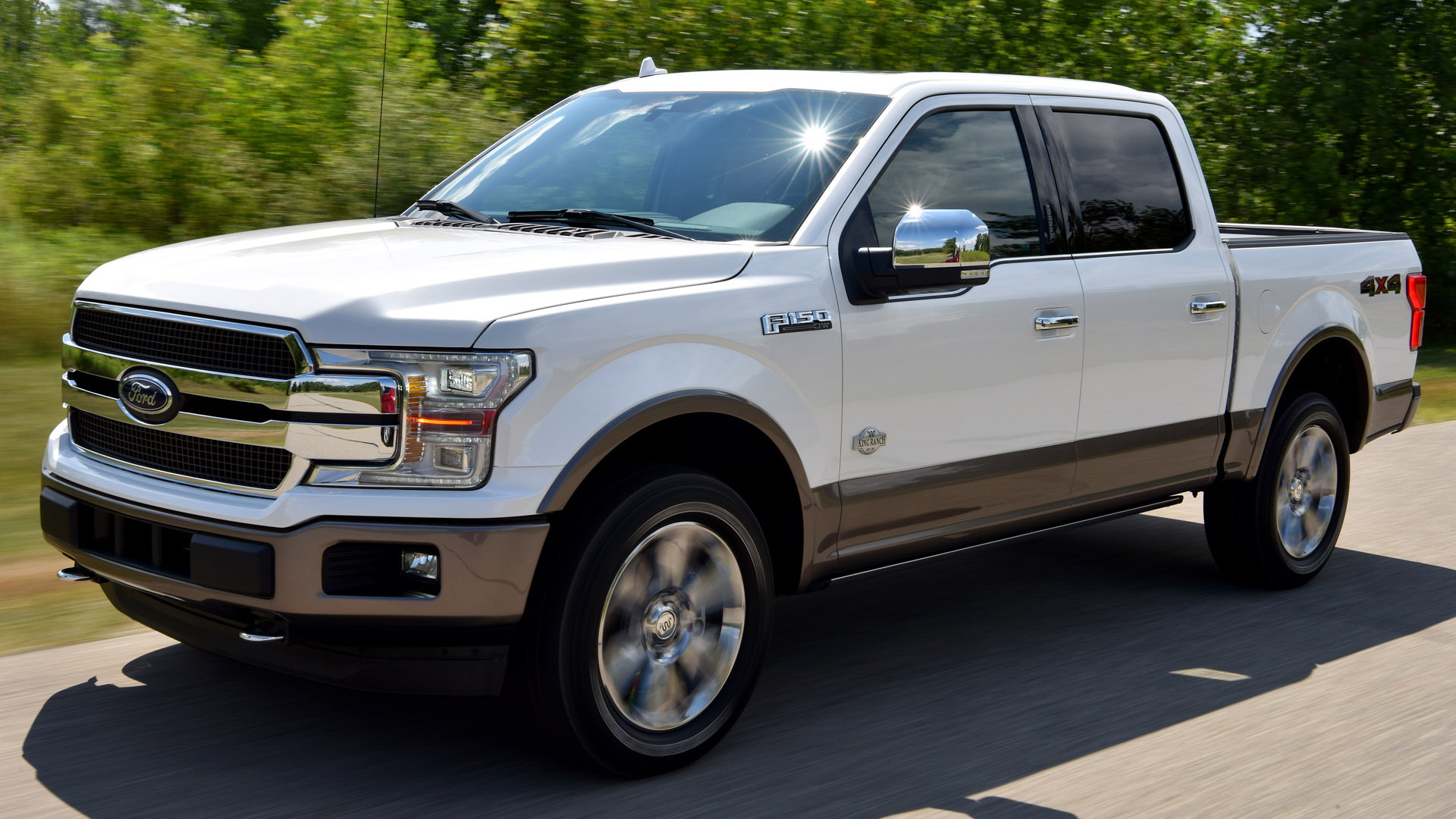 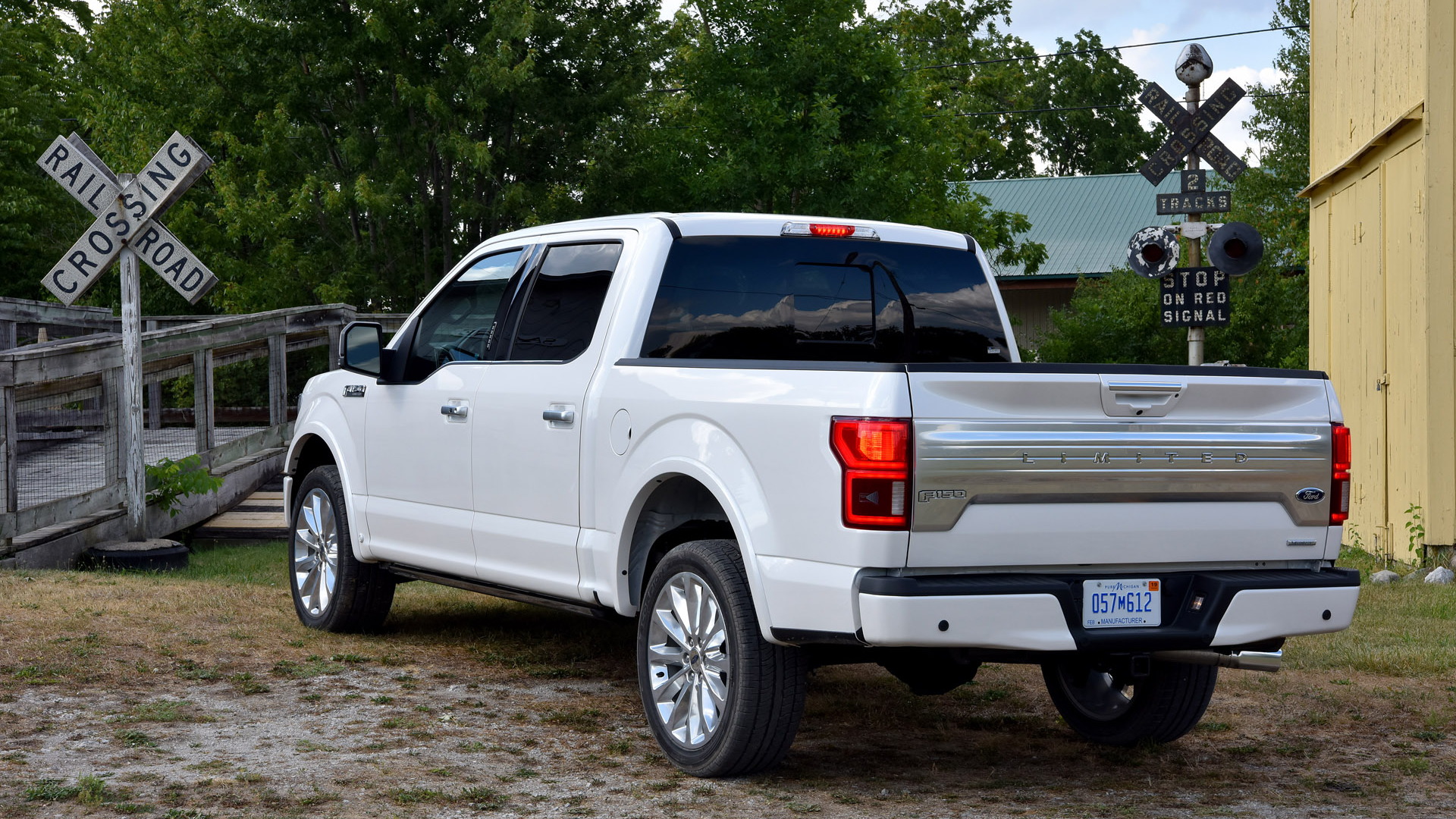 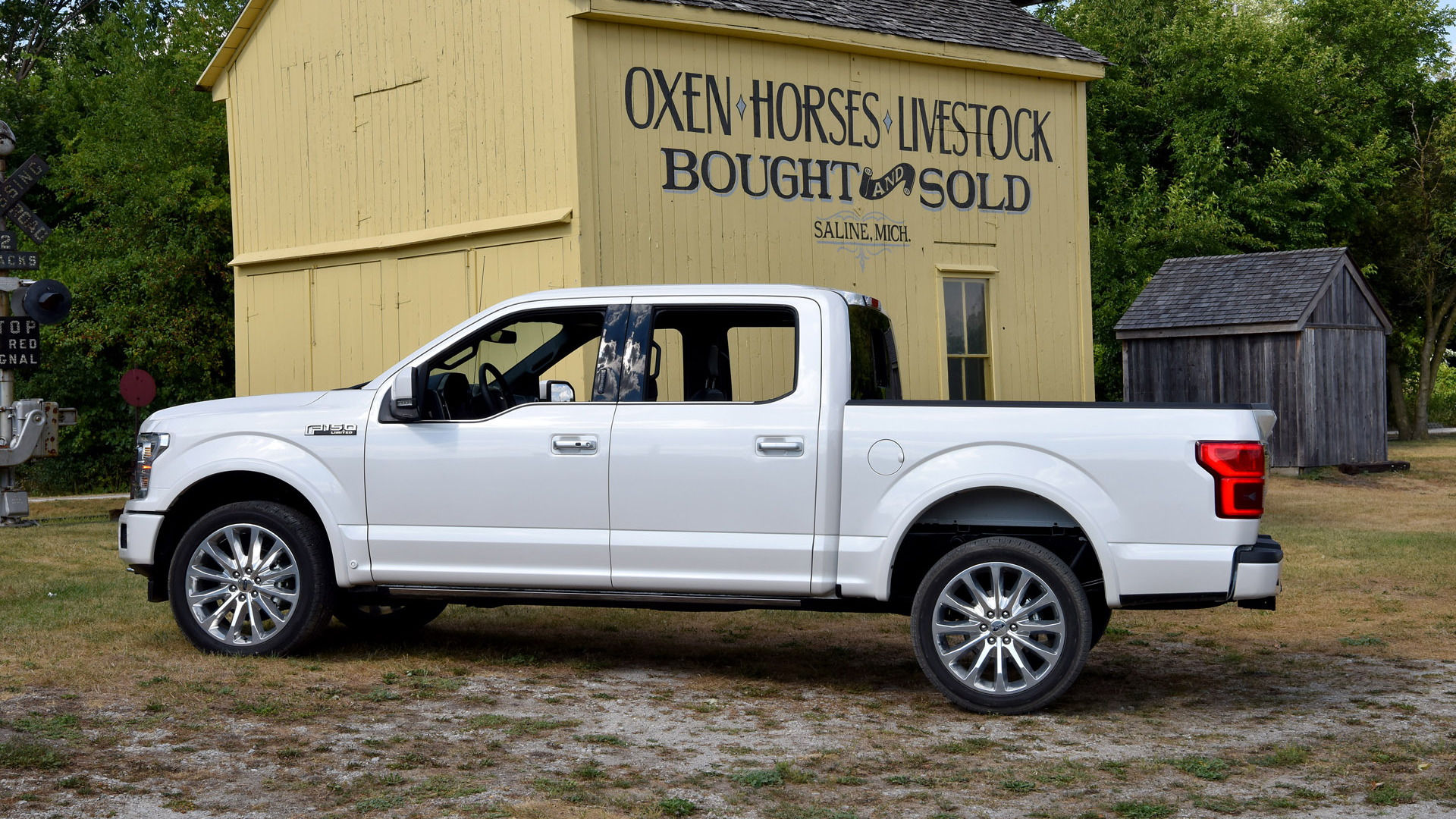 When the new Ford F-150 was unveiled in 2015, it was the world's first aluminum pickup truck, an innovation that General Motors and Ram still haven't caught up with. Combined with a pair of twin-turbocharged V-6 engines, Ford's perennial best-seller pushed the art of the truck into an important new chapter.

Consider the 2018 Ford F-150 a key paragraph in that chapter. This truck takes the pioneering efforts of the 2015 model and addresses a shortcoming that's evolved over the past few years—a now old-fashioned 6-speed automatic—while improving on the style with a brutish new look inspired by its tougher big brother.

The 2018 F-150's most obvious upgrade, of course, is how it looks. When it debuted in January, it was clear that there was a lot of the latest F-Series Super Duty in the new F-150's look—after the Super Duty borrowed the styling of the 2015 truck, of course—but the big truck's looks work better on the smaller truck's proportions. The Super Duty is tall and squarish, but adding the key details of its fascia—the so-called C-clamp headlights and the twin-bar grille—has the effect of widening the smaller F-150. A set of dual C-clamp taillight signatures tie the back end together.

But it's the way that Ford lets owners customize their trucks that makes the 2018 stand out. Take the popular XLT in a SuperCrew—Ford speak for the big, four-door body—with the 3.5-liter, twin-turbocharged V-6. There are four separate grilles to choose from, including sporty mesh or black twin-bar, a chrome twin-bar, and the standard twin-bar. There are seven wheel options ranging from 17 to 20 inches in diameter, four side step options, and 13 exterior colors. And that's just one trim, in one body style, with one engine—the 2018 F-150 offers three body styles, three bed lengths, five engines (if you count the Raptor), and seven different trim levels (again, including the Raptor). In other words, there is an F-150 for any owner, from the blue-collar worker to the white-collar urban cowboy to the baja racer.

But while the exterior adopts the Super Duty's looks and adds an overwhelming dose of customization, the cabin doesn't fall into the trap of being too brutish or uncomfortable. In fact, taking a spin behind the wheel of the range-topping F-150 Limited—which was how I spent a fair chunk of my day of testing—furthers the notion that some American pickup trucks can stand toe-to-toe with traditional luxury sedans and crossovers.

Ford lathered the Limited in beautiful leather hides, while the fetching Navy Pier color scheme would look at home on the Mercedes-Benz E-Class Coupe. One of four new color schemes spread across the XLT Sport, Platinum, King Ranch, and Limited, Navy Pier's blue leather and pale, matte wood trims looks like something Ford should be selling in a Lincoln, let alone a pickup truck. Not only is the leather on the seats—where you'd most expect it—but it's on the dash, doors, and center console, which gets a special plaque on the top, just in case you forget what kind of F-150 you're driving. It looks and feels fantastic.

The Limited I drove cost around $65,000 and will almost certainly represent the minority of 2018 F-150s on the market. But the XLT and Lariat I drove after my stint in the Limited were hardly penalty boxes. Each had a solid and durable feel to their materials—cloth upholstery in the XLT, and a less premium leather in the Lariat—while all three trims had excellent seating positions and comfortable, supportive chairs. The Limited felt like it offered more support, but I'd happily wile away hundreds of miles behind the wheel of either of the lesser models.

While the 2018 F-150 is a thorough refresh compared to last year's version, and gets a bunch of aesthetic tweaks, Ford has made some impressive powertrain moves. Ten-speed automatics replace 6-speed autos on the F-150's top three engines—a new, second-generation 2.7-liter, twin-turbocharged V-6, the venerable 5.0-liter V-8, and the popular twin-turbo, 3.5-liter V-6—while the 3.3-liter V-6 is an entirely new and smaller replacement for the F-150's old base engine. The result is more efficiency, more power, and more capability.

Available only in the most affordable trims, the XL and XLT, the new 3.3-liter, direct-injected V-6 performs smoothly and will be fine for work trucks and buyers that just want a new pickup. There's 290 horsepower and 265 pound-feet of torque here—8 more ponies and 12 torques more than the old 3.5-liter base engine—and despite high peaks compared to the pricier turbocharged engines, those figures feel accessible. The 3.3-liter is responsive off the line and delivers its power linearly as the revs increased. It's not the best sounding engine, though, but as the base V-6 is more beast of burden than thoroughbred, we doubt the dulcet tones will bother its customers.

The base V-6 is the only F-150 powertrain to hang onto its 6-speed automatic, and like the engine, it's merely fine. Shifts are quick enough and there's a minimal amount hunting under hard acceleration. This transmission also holds its gears happily, and is quick enough to engage off the line. I'll also give it some bonus points for its old-school, column-mounted shifter.

Ford doesn't limit XL and XLT customers to the 3.3-liter V-6, of course. Both the second-generation, 2.7-liter, twin-turbocharged V-6 and the old-school 5.0-liter V-8 serve in these base trucks (as well as the well-equipped Lariat). While I didn't drive the V-8—it pumps out 395 hp and 400 lb-ft of torque, a 10-hp and 13-torque increase, while gaining at least one mpg across the board—we did sample the Lariat with the 2.7-liter and its new 10-speed automatic.

The 2.7-liter V-6 has been competent in the F-150, and it's even better for 2018, gaining 25 lb-ft of torque for a total of 325 hp and 400 lb-ft, while gaining 1 mpg in city, highway, and combined stats in four-wheel-drive trim and 1 city mpg in two-wheel-drive form. There's very little turbo lag, and with peak torque at just 2,750 rpm, the power is accessible enough that even a vehicle the size of an F-150 feels quick and willing.

But the 2.7-liter's problem is its twin-turbocharged big brother, the 3.5-liter EcoBoost V-6, which is better in every way and doesn't make much of a fuel-economy sacrifice. The 3.5-liter was my next destination, where it provided the thrust for the range-topping F-150 Limited. And it's here that Ford's overarching efforts with the 2018 F-150 are most enticing.

The 3.5 remains a dynamite engine, blessed with a sound that doesn't feel appropriate for a pickup truck. The brawny V-6 is smooth and loud enough, but it avoids the occasionally bizarre growliness of the Raptor. But my favorite thing is the way the two turbos whistle. In a touch that feels more appropriate in a Ford GT, digging into the throttle elicits a delicious turbo whistle that you can hear from initial spooling to blow off. It's a stupid sound for a mainstream truck—it's present in the Raptor, too—but I don't care, because it's a fun, sporty touch. And real performance backs that noise up. With 375 hp and 470 lb-ft of torque, this is the engine for speed freaks. Power is always available, be it at a standstill, at low speeds, or at medium and highway speeds. It's just a damn quick truck.

The new 10-speed automatic feels fantastic with either of the turbocharged engines. Upshifts are quick and constant, but they're easy to ignore, particularly if you turn up the available B&O; Play—it's like Bang and Olufsen's take on Beats by Dre—audio system to drown out the engine. On downshifts, the 10-speed's constant action carries on, which was reassuring.

With so many gears to choose from, I was concerned that calling for sudden downshifts would leave the transmission paralyzed by indecision. Instead, the transmission happily drops multiple cogs at a time, and then drops a few more if you dig in. And then for good measure, it switches another few. Busy.

Too much? Not really.

But if you ignore the ever-present movement of the gear indicator on the left side of the instrument cluster's center display, it's difficult to notice the frenetic transmission. Ford managed to attach its most ambitious automatic transmission yet to its most popular vehicle without any real impact on the driving experience—the 2018 F-150 with its new 10-speed automatic drives just as well as last year's model.

That Ford did this while making comprehensive improvements to three of its four engines and improving the exterior styling deserves a tip of the cap. The 2018 F-150 is a textbook refresh that not only improves what needs improving, but creates a more attractive pickup truck and an impressive evolution on a revolutionary vehicle.