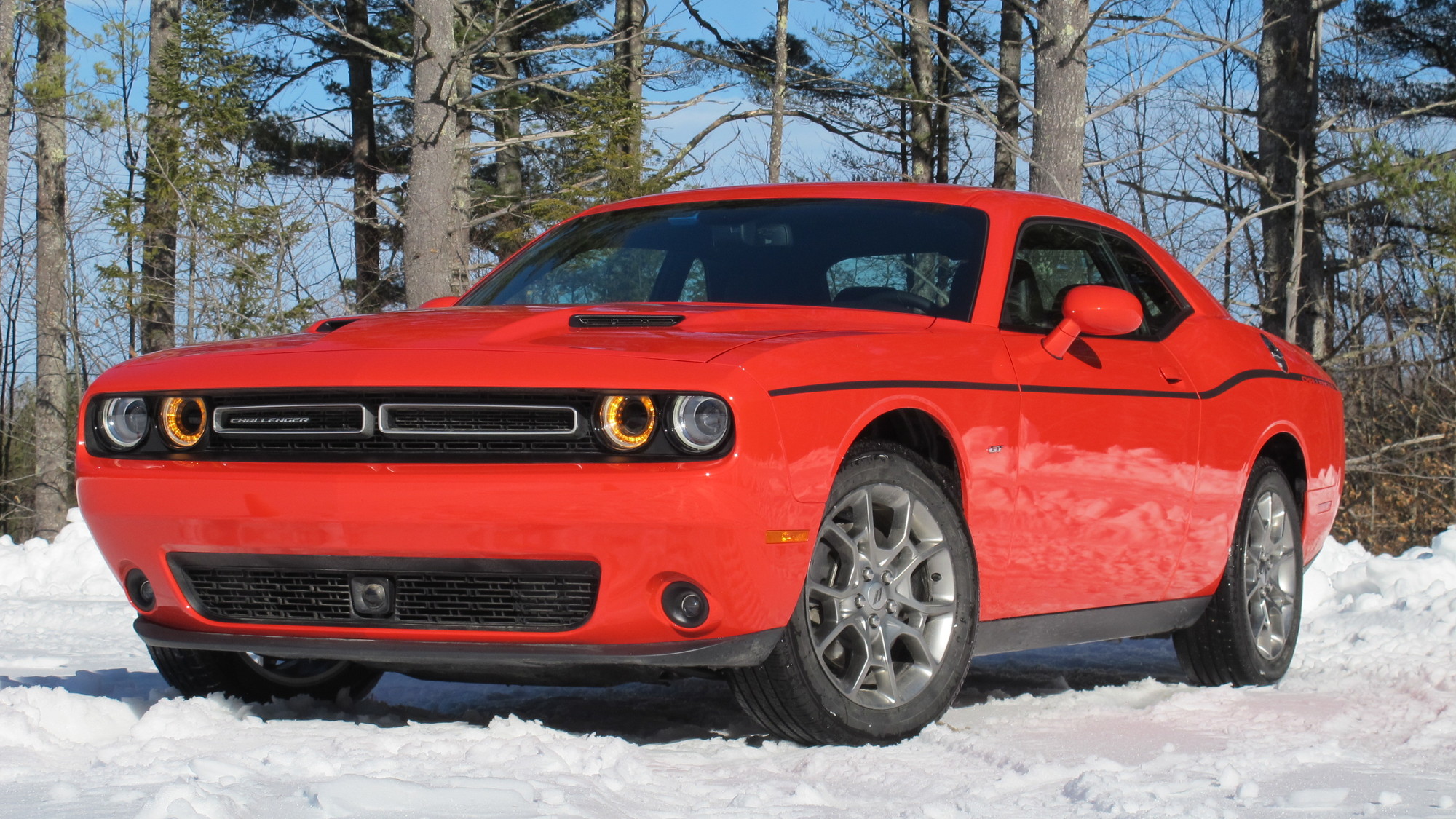 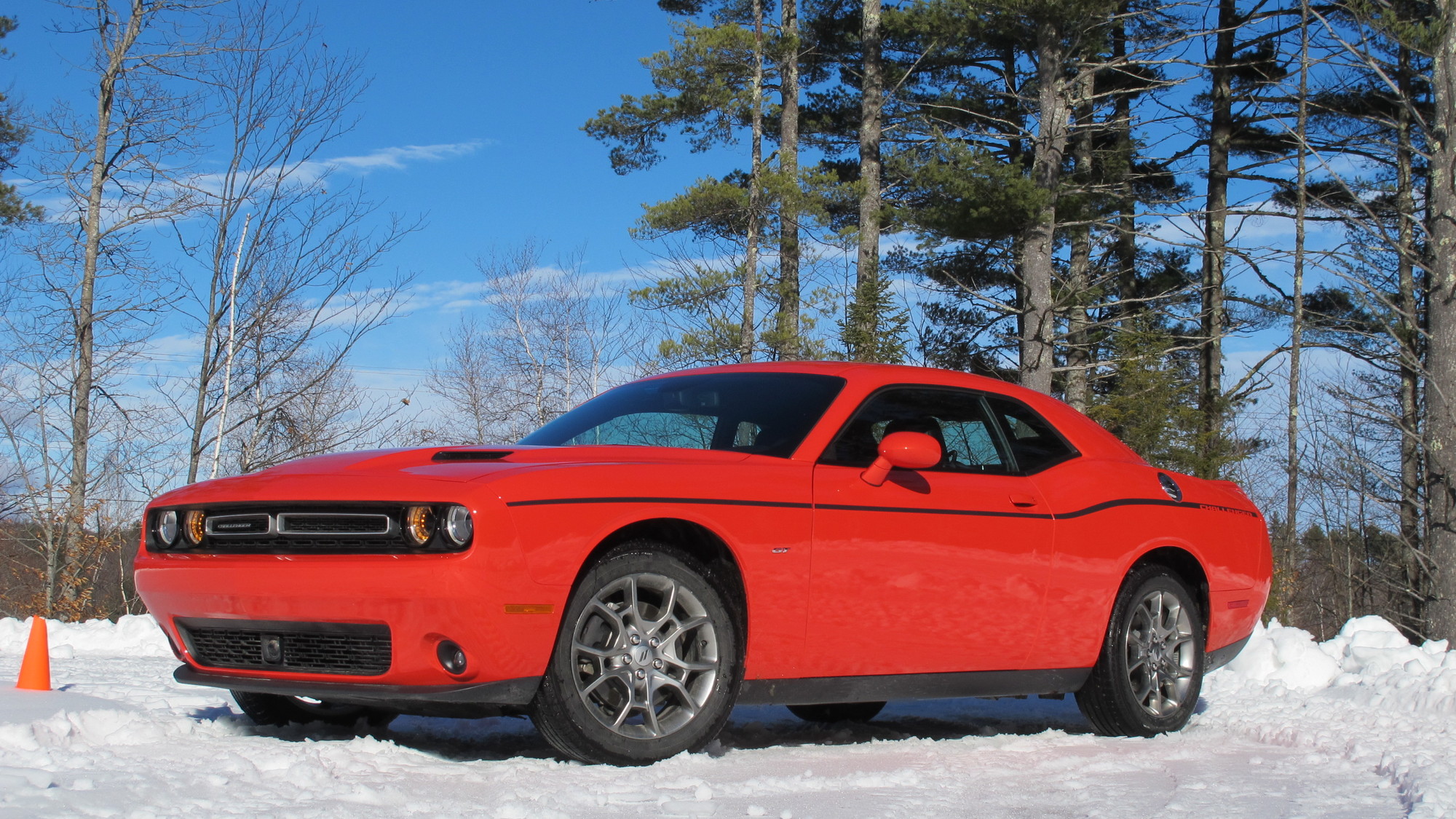 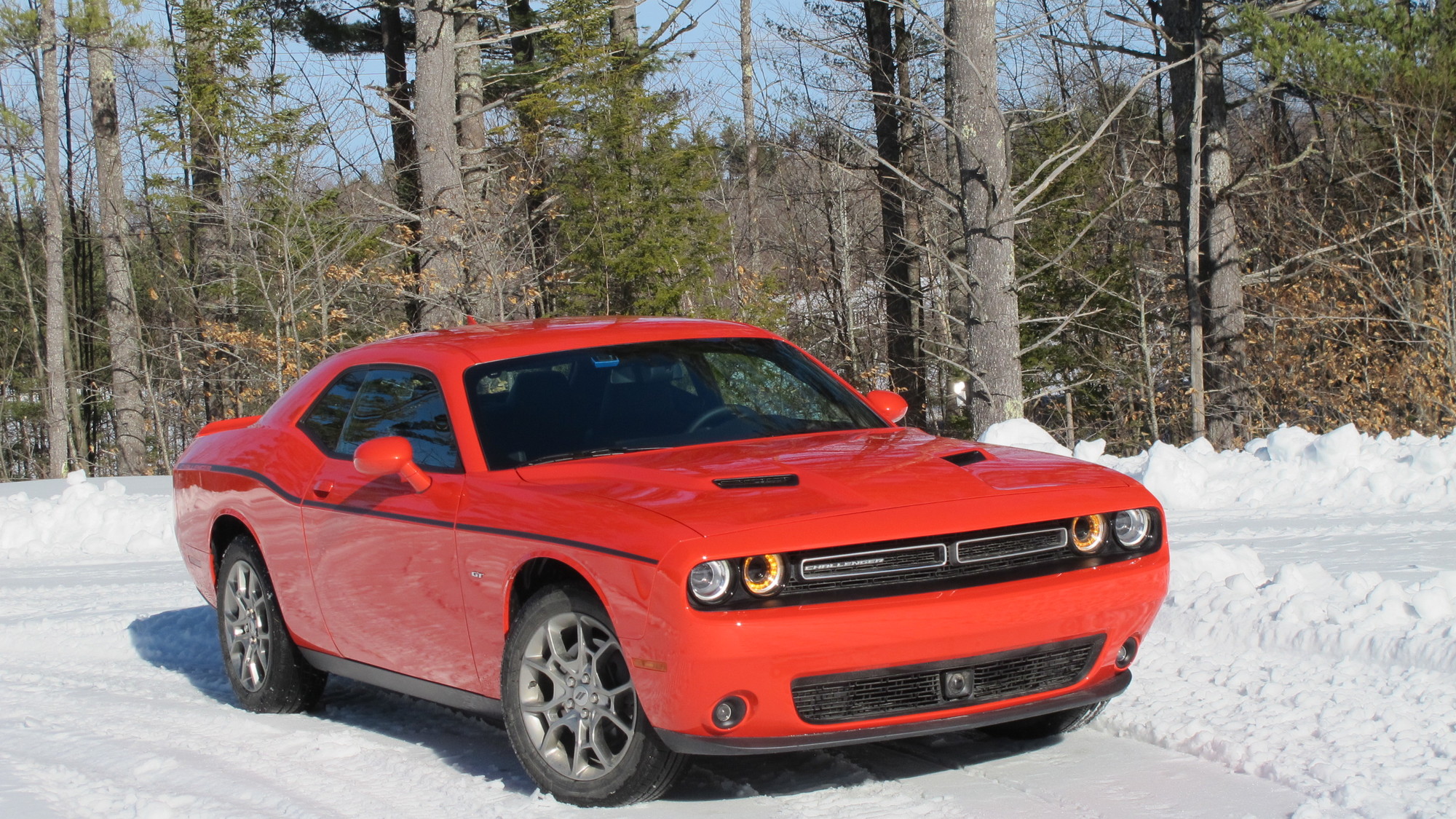 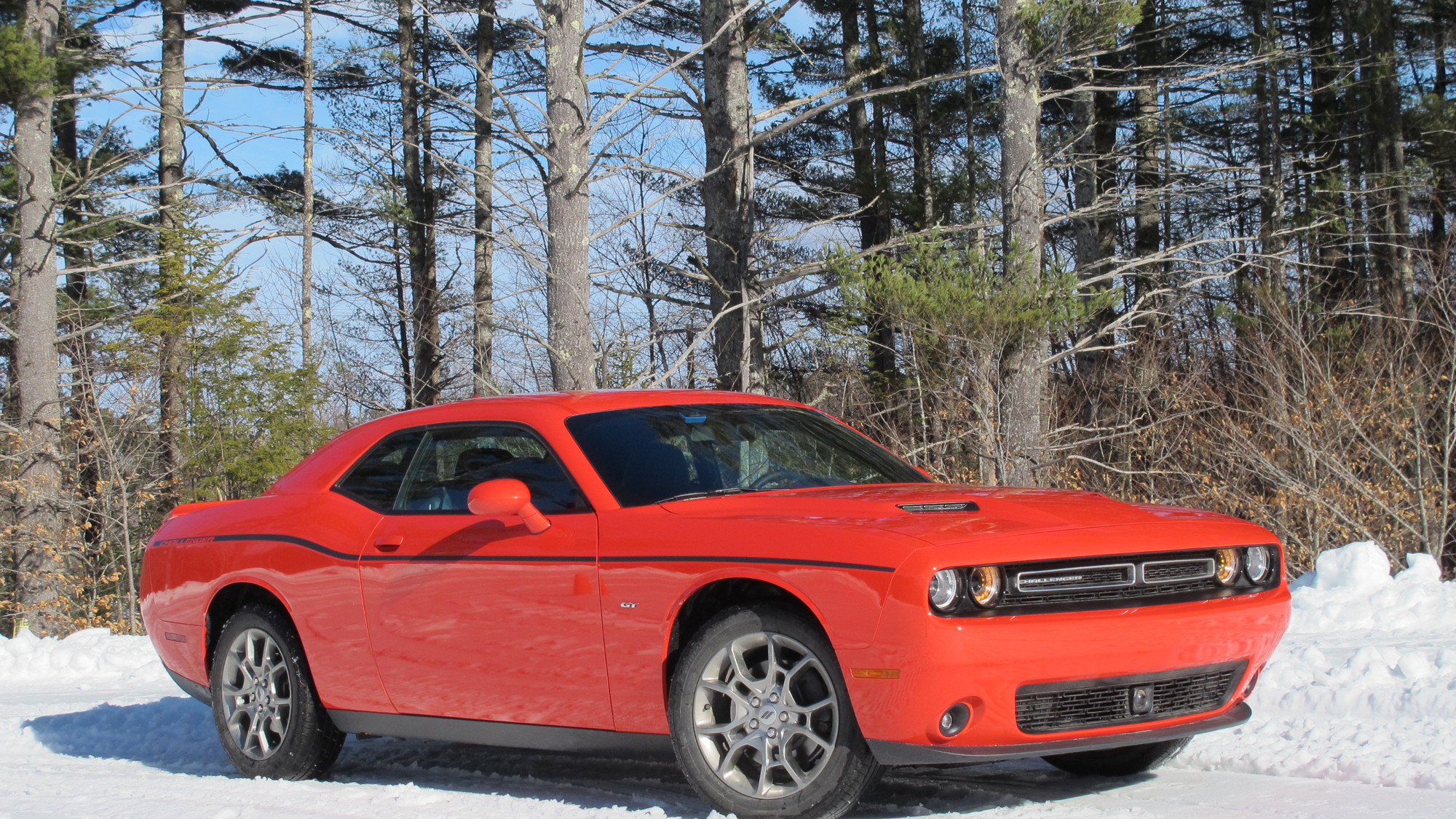 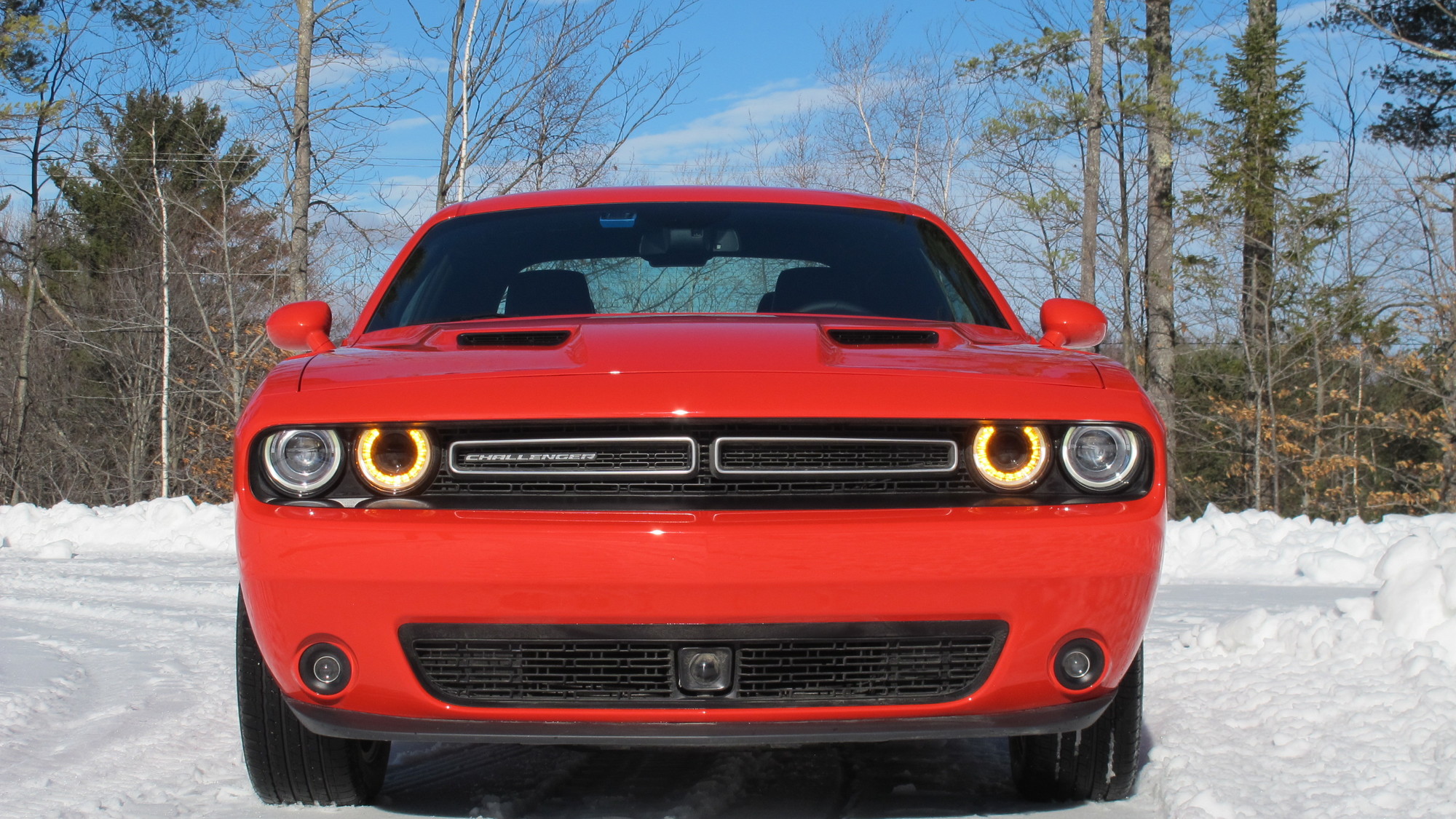 88
photos
How do you make an old car new again? If you’re Dodge and your Challenger's structure hasn’t significantly changed since it was released for the 2008 model year, you add an all-wheel-drive system from an existing product, slap a new model name on it, and call the all-season muscle car.

The result is the 2017 Dodge Challenger GT.

Now, Dodge did a little more than that, but we'd have a lot more to say if we were reviewing the next generation Challenger today, the one built on the Alfa Romeo Giulia's platform, instead of a “new” version of a nine-year old car. But Fiat Chrysler Automobiles is in a bit of a budget crunch and product development has been pushed back as a result.

In the meantime, Dodge has added AWD to the Challenger for the GT and thrown on a wider body and even more power on top of the already insane Challenger Hellcat and calling it the Demon. The idea of an all-weather muscle coupe isn’t a bad one. And we’re all for crazy power around these parts, so we’ll be happy to review that one, too.

Can I borrow your AWD system?

The 2017 Dodge Challenger GT is offered only with the brand’s 305-horsepower 3.6-liter V-6 and 8-speed automatic transmission. Why? Because V-6s and automatics sell better than V-8s and manuals.

The GT borrows its all-wheel-drive system and P235/55R19 Michelin MXM4 Primacy all-season tires from the AWD Dodge Charger. Very little needed to be done to adapt it. A driveshaft needed to be shortened, the exhaust had to be rerouted, and other elements of the underbody had to be modified to make it fit, but it’s not like Dodge had to develop a new system or a new platform. All told, the AWD system adds about 200 pounds to the V-6 Challenger, bringing the already hefty curb weight to a porky 4,108 pounds.

This AWD system defaults to rear drive on dry pavement in warm weather and has a front-axle disconnect feature to prevent the parasitic loses of sending power to the front wheels when it’s not needed. If the rear tires are on ice, the front tires can drive the car alone, but the front axle can only handle 38 percent of the engine’s torque.

Several proprietary factors determine when power AWD is engaged, including temperature, slip, and throttle application. If you put the car in Sport mode, AWD is automatically engaged. Dodge wouldn’t say what the temperature is that triggers AWD, but during our drive in Maine, the system was always in AWD during a 36-degree day. We’re guessing that proprietary temperature is around 40 degrees.

Dodge also offers three electronic stability control modes for the Challenger GT: normal, sport, and off. Normal mode cuts off the power when it detects slip and uses the electronic stability control to try to get the vehicle back on its intended path quite early. Sport also uses ESC and cuts the power, but does both much later. Off never cuts the power and turns off the ESC completely.

When it comes to having fun in the snow, the all-wheel-drive system works exactly how anyone familiar with rear-wheel drive would want it to work. Dodge adds Vehicle Dynamic Control Programming that uses signals from the ESC to help the AWD system do its job. VDC monitors the steering angle, yaw sensors, vehicle speed, and wheel speed sensors to determine if it should send power to the front or rear. The basic upshot? If you are on a slick surface and you add steering angle, it will send power to the rear. That allows the Challenger GT to act like a rear-drive car on snow until you straighten out the steering wheel. At that point, power goes to the front and you can drive out of a turn. It makes for great fun on a snowy autocross.

That’s just what Dodge offered at its drive program for the GT. Growing up in Wisconsin with several rear-drive cars in my early years, I found the Challenger GT easy to handle in the snow, even with the traction control completely off (actually, that was when it proved to be the most fun). Charge toward a turn, brake to get the speed under control, turn in to start the momentum in the right direction, goose the throttle, wait for the rear end the swing around, catch it by straightening the wheel, then drive out of the turn and head for the next one. Simple sliding fun.

The AWD system wasn’t the only change Dodge made to create the Challenger GT. For the suspension, Dodge engineers looked to the AWD version of the Charger Police Pursuit. That’s a rather robust, heavy duty suspension, but it’s different than the performance suspension in the SRT and Hellcat models because the upper and lower control arms have a different geometry to work with the AWD system. Using those components, Dodge dialed back the firmness a bit by using slightly thinner sway bars and slightly softer spring rates and damper settings. The steering calibration was then changed to work best with this setup.

We’ve always found one of the Challenger’s greatest strengths to be its ride quality, but this cop suspension begins to challenge that notion. On the sometimes broken Maine roads of our test drive, the Challenger GT’s ride quality proved busy and jiggly, and the suspension pounded over the worst of the ruts.

We’ve tried the cop suspension in the Charger and it didn’t seem as rough. Perhaps the shorter wheelbase of the Challenger just makes the ride busier. All things considered, that’s an odd choice given the fact that the AWD system means the Challenger GT will see more rough roads.

On the flip side, the firmer suspension helps to limit some of the quite notable body lean that plagues other Challengers, especially V-6 models. It also makes the steering feel more direct, though it isn’t all that quick and it is still rather light.

While the firmer suspension makes this mid-size coupe based on a full-size car handle better, the Challenger GT still can't match the deft handling of the Chevrolet Camaro and Ford Mustang. Those much newer rivals go beyond muscle car and pony car status and can be considered sports cars.

Given the GT’s intended use for inclement weather, perhaps this suspension would better serve the R/T model.

The use of the V-6 isn’t a deal breaker. That’s because this engine and transmission work well together. The V-6 offers satisfying power, and it can vault this car from 0 to 60 mph in around six seconds, which is still faster than most muscle cars back in the day. The 8-speed automatic transmission makes the power easy to tap into, too, with crisp, responsive shifts.

AWD at a premium

While the base Challenger SXT starts at $28,285, the Challenger GT costs at $34,685. It’s actually equipped more like the $31,285 SXT Plus model, which adds such features as a rearview camera, upgraded brakes, mesh aluminum interior accents, metal pedals, a tilt/telescoping heated steering wheel, heated and ventilated sport seats, the 8.4-inch Uconnect infotainment system, a 276-watt Alpine audio system with 6 speakers, and rear parking sensors. But it also gets nappa-grade leather seats, the Sport driving mode, the three-mode stability control system, and the cop suspension.

A Super Track Pack button is standard, too. It pulls up the brand's Performance Pages that track such information as 0 to 60 mph and quarter-mile times, g forces, current torque and horsepower use, and additional gauges of interest to enthusiasts.

For an additional $995, buyers can specify a package that adds Alcantara synthetic suede to the seats, three more Alpine speakers and 509 watts of power, and a sportier steering wheel.

That way, you could get sweet looking muscle car for $30K and go bombing around in the snow. It would offer a bit more chassis compliance, too.

It may not be new, but the 2017 Dodge Challenger GT is one of a kind, at least among American muscle cars. It’s a big, spacious, coupe with killer retro looks that is genuinely fun to drive in the snow.

I’m just looking forward to a smaller, nimbler next-generation Challenger with perhaps a dual-overhead cam V-8 or a twin-turbocharged V-6. Sure, Dodge can throw in AWD, too. But all that would take development dollars, and I’m not sure Dodge has them to spend at the moment.