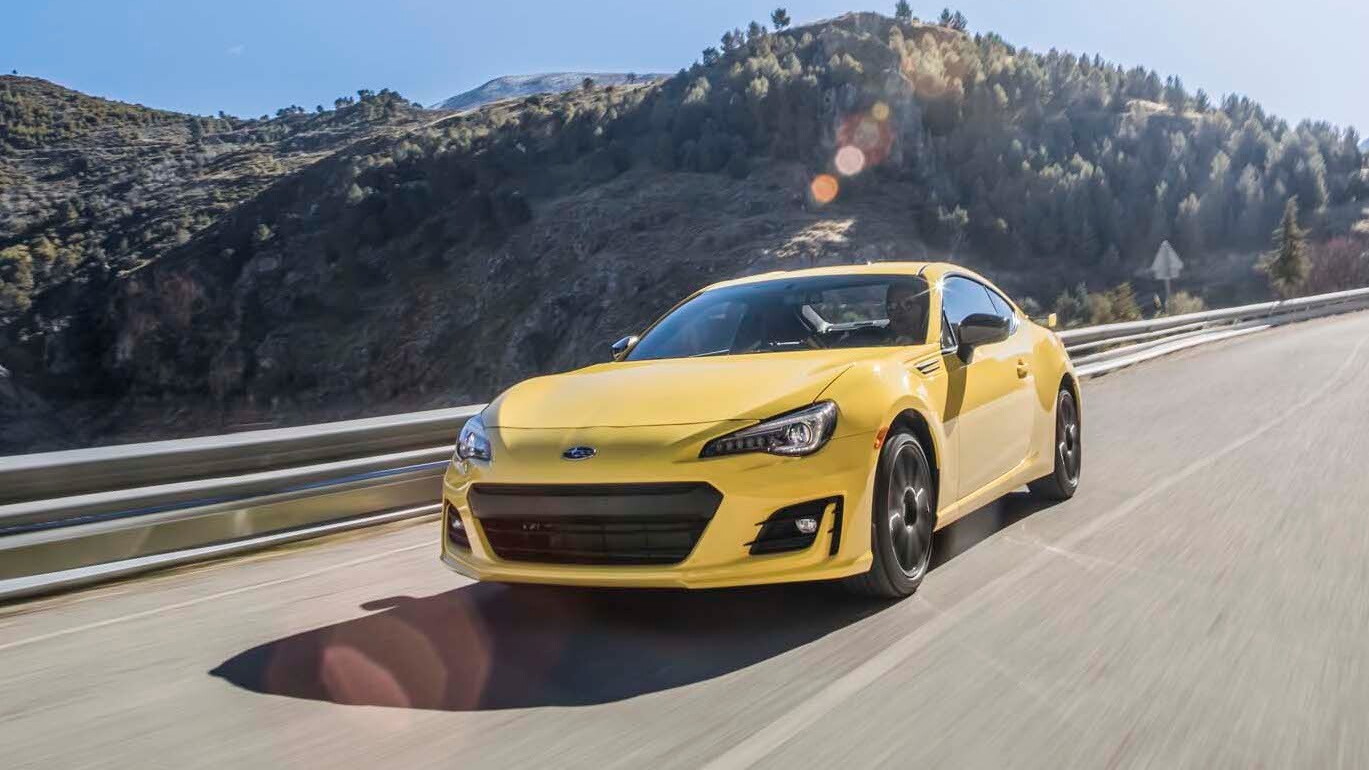 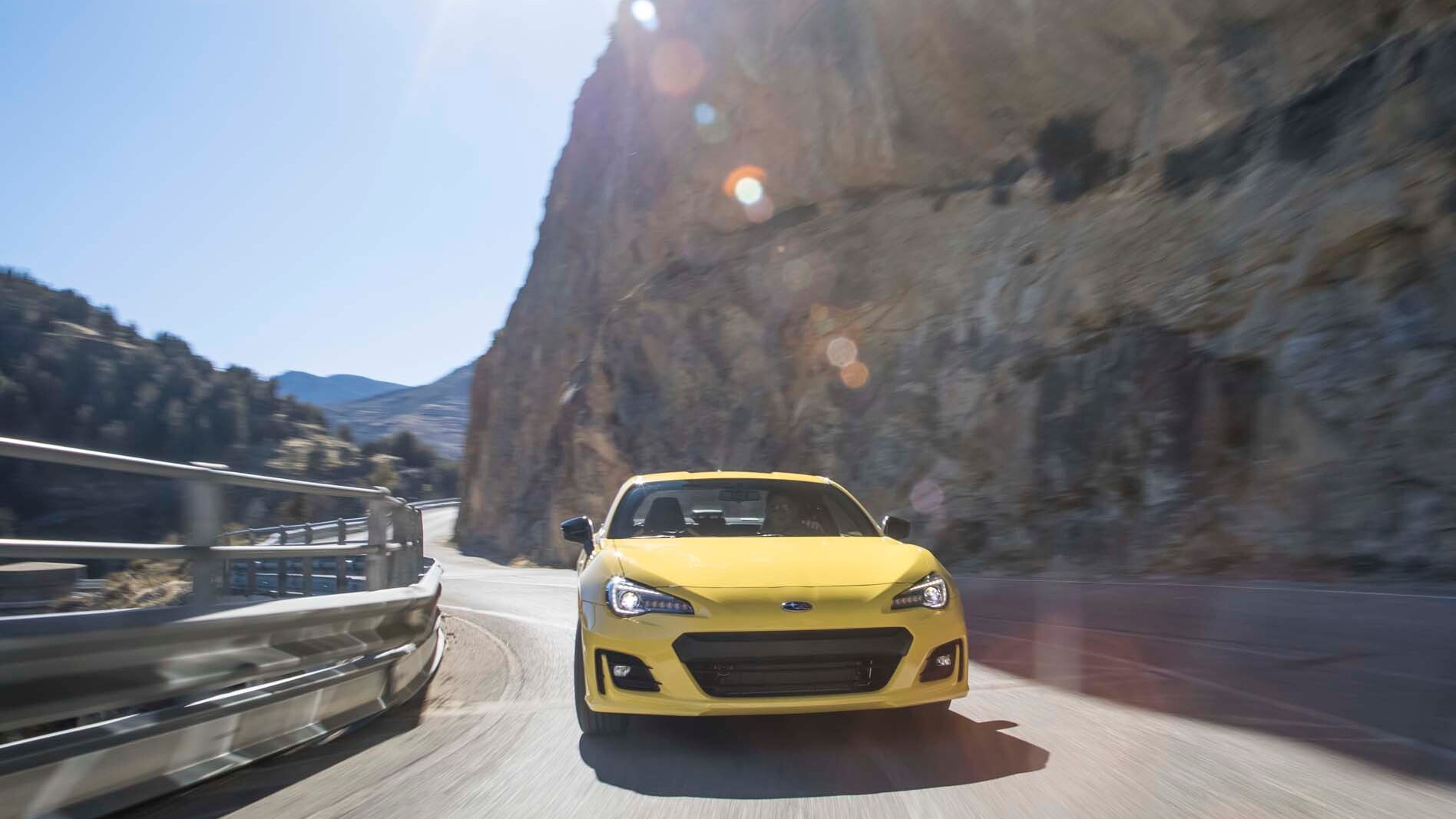 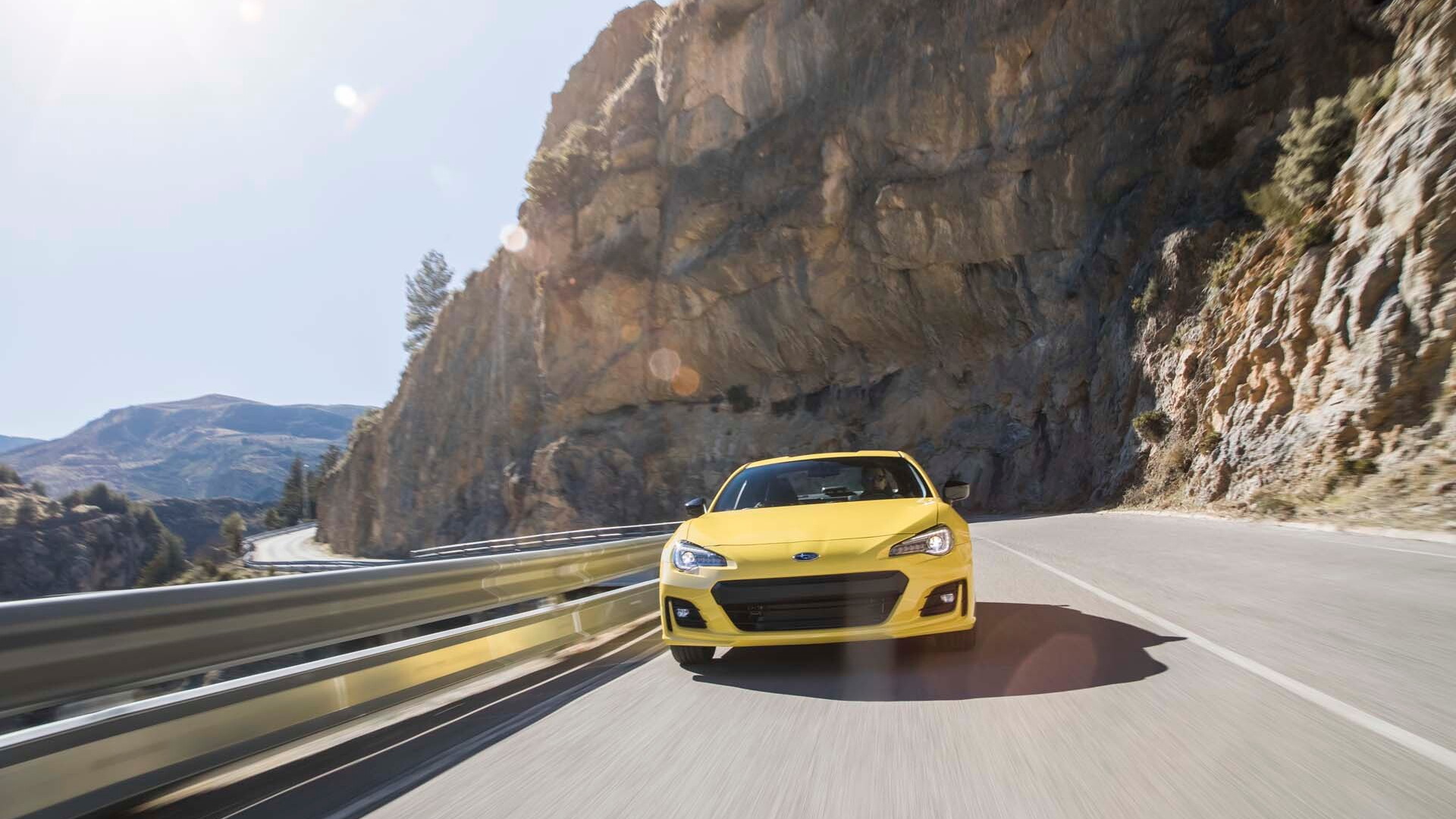 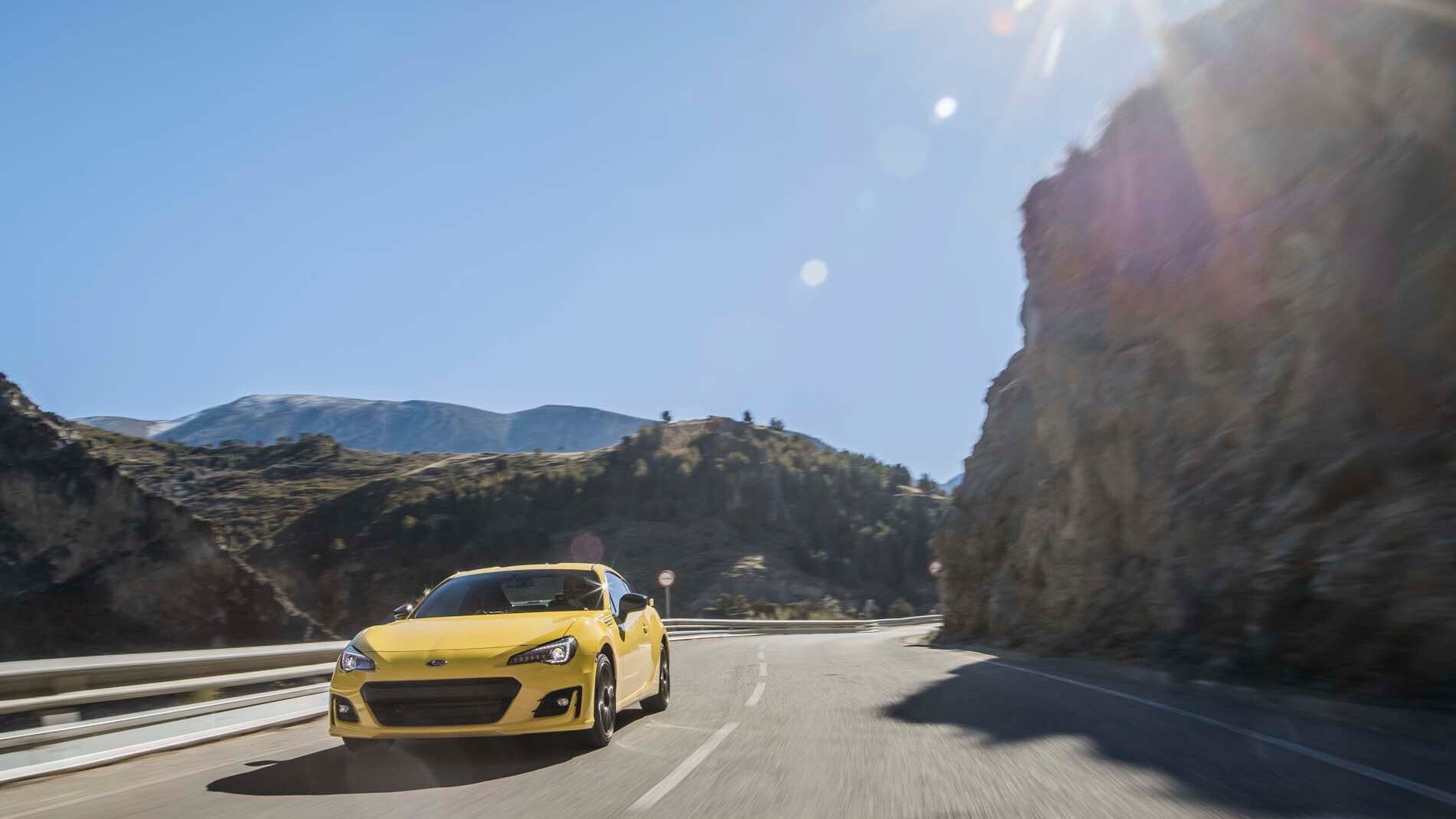 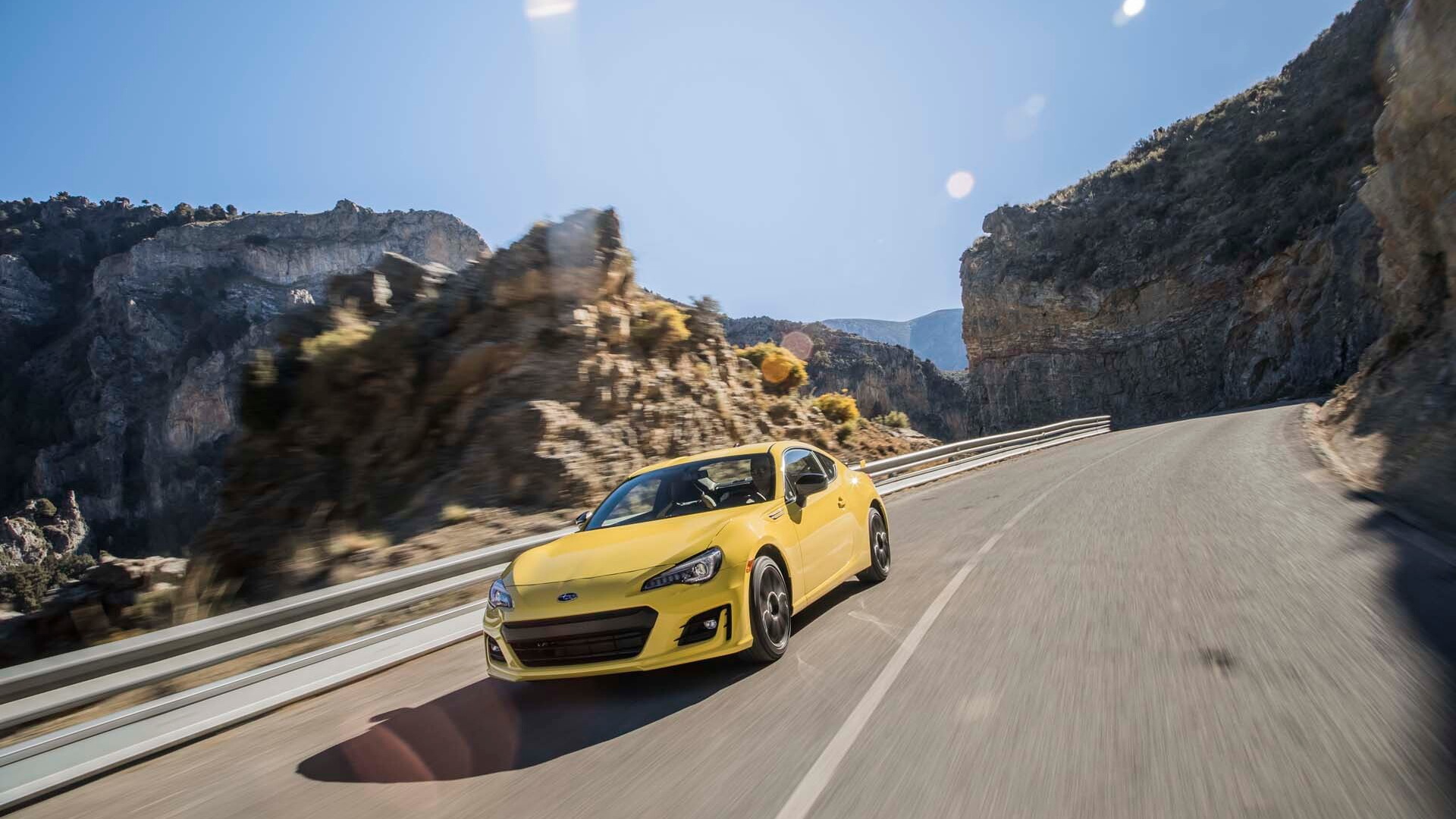 If you're still complaining about the Subaru BRZ's lack of turbo, you probably don't quite understand how Subaru--with help from Toyota--developed this sports car. From the beginning, the point was to save as much weight as possible, and that doesn't change with a 2017 update.

Subaru has given the 2017 BRZ its most substantial update since it was introduced five years ago, amping up what's best about the car while turning down the nannies. It's also introduced a Performance Package that upgrades what the brand views as important. Hint: that isn't power.

This is because, in its current form, the BRZ isn't about straight-line speed; it's about handling. To prove this point, Subaru invited Motor Authority to Granada, Spain to drive the updated 2017 BRZ with the new Performance Package on city streets, up twisty mountain roads, and around the Circuito Mike G Guadix.

The updates and upgrades

As a refresher, for 2017 the BRZ gets some notable enhancements all around. From full LED lighting both front and rear to a new front bumper that gives the car a wider and lower look, it's just better looking. The headlights now have "BRZ" lettering on them, because everybody's doing that sort of thing these days. At the back, there's a new aluminum rear spoiler that's thinner and lower, and also serves to improve stability over the 2016 model.

Inside, Subaru swaps in a new steering wheel, which now has audio switches and controls for the available 4.2-inch color gauge cluster display on Limited models. New knee pads on the sides of the instrument panel protect the driver's knees during hard cornering--a feature I appreciate.

The infotainment's been upgraded as well, with a Magellan navigation system--which requires a subscription--along with an app to help find the best parking spots and compare rates. It works with the Yelp and Glympse apps, the latter of which gives you the ability to share your location in real-time with others.

The most typically Subaru addition? An app called eBird, which tells you about local bird sightings and locations. Can't even make this stuff up, folks. It's more appropriate for the Outback, but Subaru has brought it to the BRZ.

Subaru hasn't forgotten the most important aspect of the BRZ: how it drives.

The front springs are now a smidge stiffer for better handling on turn-in while the rears are 10-percent softer for better stability. A 1 millimeter thicker rear stabilizer bar means ever-so-slightly less body roll, and the dampers have been retuned in the name of comfort and handling.

These are all small changes, but the single largest change involves the software. The stability control system thresholds have been raised, and not by a little. With all the systems on, the nannies come in latter, and the stability control's Sport mode has become a Track mode that takes its thresholds to a whole new level.

Manual equipped cars--which account for 83 percent of BRZ sales--get a very small bump in output for totals of 205 horsepower and 156 pound-feet of torque. The increases of 5 horsepower and 5 pound-feet of torque are thanks to an aluminum intake manifold replacing the 2016's plastic intake, a new air cleaner box and intake towers with 30 percent less resistance, a low-friction finish on the camshaft journals, and revised fuel pump cam lift. The valve stems are buffed and polished and the rocker arm pivots are revised. Subaru also uses stronger pistons and a larger diameter exhaust manifold with a revised collector shape. Finally, the final drive ratio on manual transmission models has been lowered from 4.1 to 4.3:1.

The BRZ's body is stiffer than before thanks to a thicker bracket behind the strut tower braces, a thicker transmission crossmember plate, and new reinforcements at the rear wheel housings.

The goal with the updates was add a bit more comfort, make the safety systems less intrusive, improve handling, and raise the bar for fun.

A Performance Package that matters

On top of the ride and handling changes, Subaru adds a new Performance Package. If you think a this type of package needs to increase horsepower, you probably think the first upgrade to a car should be more power. You, friend, are wrong.

Before adding power one should always upgrade a car's ability to stop, and that's what Subaru is doing.

The new Performance Package--which is only offered on the Limited model--gives the BRZ a Brembo brake system with 4-pot calipers in the front and 2-pots in the rear. The front rotors are larger in diameter, up from 11.6-inches to 12.8-inches, and thickness, up from 0.95-inches to 1.18-inches. The rears get larger as well, with diameter increasing from 11.4-inches to 12.4-inches, and thickness increasing from 0.71-inches to 0.79-inches. These rotors are the same size--both in thickness and diameter--as those fitted to the WRX STI, which is 578 pounds heavier and has exactly 100 more horsepower.

Last but not least, the Performance Package adds Sachs ZF dampers that Subaru says increase both stability and comfort.

Total weight increase with the Performance Package? A flat 20 pounds, most of which is in the bigger brakes.

Note: The upgrades in the 2017 Performance Package are not available for the BRZ's twin cousin, the Toyota 86, for now.

Tail out for days

"We are putting you into cars on a live street. Well, it's more of a tight alleyway. So, don't dilly dally. Get into the cars and move along. Traffic will be behind you." That's what Subaru officials tell our group of journalists as they usher us into the cars outside of our downtown Granada hotel.

They aren't kidding. It's a cobble-stone alley way. A Subaru BRZ turns a corner, come down the "road," and I have to jump into the driver's seat as cars behind honk because I'm not moving as quickly as they would like.

As I take off down the alleyway that's "paved" with brick and stone, the BRZ's suspension proves surprisingly compliant. There are no jarring movements or fidgety up-and-down motions that one would expect on this surface. Daily driver indeed.

I turn right onto a bustling street, and I immediately appreciate the terrific visibility out the front of the BRZ as I acquaint myself with the foreign stop lights and signs. When someone honks their horn at me for waiting at a red light--how dare I--it occurs to me that the thin, low-mounted rear spoiler really doesn't hurt visibility, which is rare on a sports car.

As I make my way out of the city and up into the mountains, the worn road surface became surprisingly slick in a matter of seconds as I take a sharp, up-hill corner. The sun dances off the surface and I see where the pavement has a sheen from being worn over many years of abuse.

Making our way through tiny villages children look at our group of BRZs as if we are driving through in McLaren P1s and Ferrari LaFerraris. The looks on their faces are of awe and wonder.

Finally, we arrive at the Circuito Mike G Guadix on a day blessed with blue skies. Nestled in the foothills of Spain's Sierra Nevada mountain range, it's a very tight, technical track 1.864 miles in length with some elevation changes. After a track briefing, it's time to attack the track.

Tap the start button, push in the clutch, engage first gear, and ease onto the track. We do two flying recon laps and then we are off. I leave all stability and traction control systems on for a few laps to see how much the new thresholds will allow the car to slip before stepping in. Surprisingly, I am able to kick out the rear end in corners with nary a flashing yellow warning light to signal any safety system.

Put it into Track mode, barrel down the straight, hard on the brakes--which never fade throughout the day despite the fact that I make the pads smoke a bit--turn in, bury the throttle, oversteer and the rear end is hanging out, perfectly controlled and balanced. Despite its electric boost, the power steering provides a good sense of what's going on.

The car just wants to go sideways, but feels completely at ease. It's as if the BRZ's asking to just drift through the corners with grace.

The gearbox feels good, too. It snicks with short throws and solid engagement. The clutch, takes a quick second to learn as it's quite light with an early engagement point. Heal-and-toe shifts? Not a problem, as the BRZ's pedal placement is basically a blueprint for how to properly arrange pedals for the one-foot dance.

The beauty of BRZ

With the BRZ you get a pure sports car that costs only $28,840 in loaded Limited trim with the Performance Package. It's track-ready, and it will put a huge smile on your face, even at legal speeds.

And that takes us back to the beginning of this tale. If you think the BRZ needs more power via a turbo, Subaru would argue that you are wrong, and that the Performance Package provides all the track-ready fun you need.

While I agree that this package makes a pure sports car even better, I can see both sides. Subaru has proven that you can indeed have plenty of fun driving a slow car fast, and you can do it on a budget to boot. But I can't help but think I'd like more power, too. It's not coming any time soon, but maybe in the next generation of the BRZ will have a Performance Package and a turbo.

Turbo or no turbo, the current BRZ is a true sports car for the enthusiast. The fact that it's even built makes us all #Blessed.