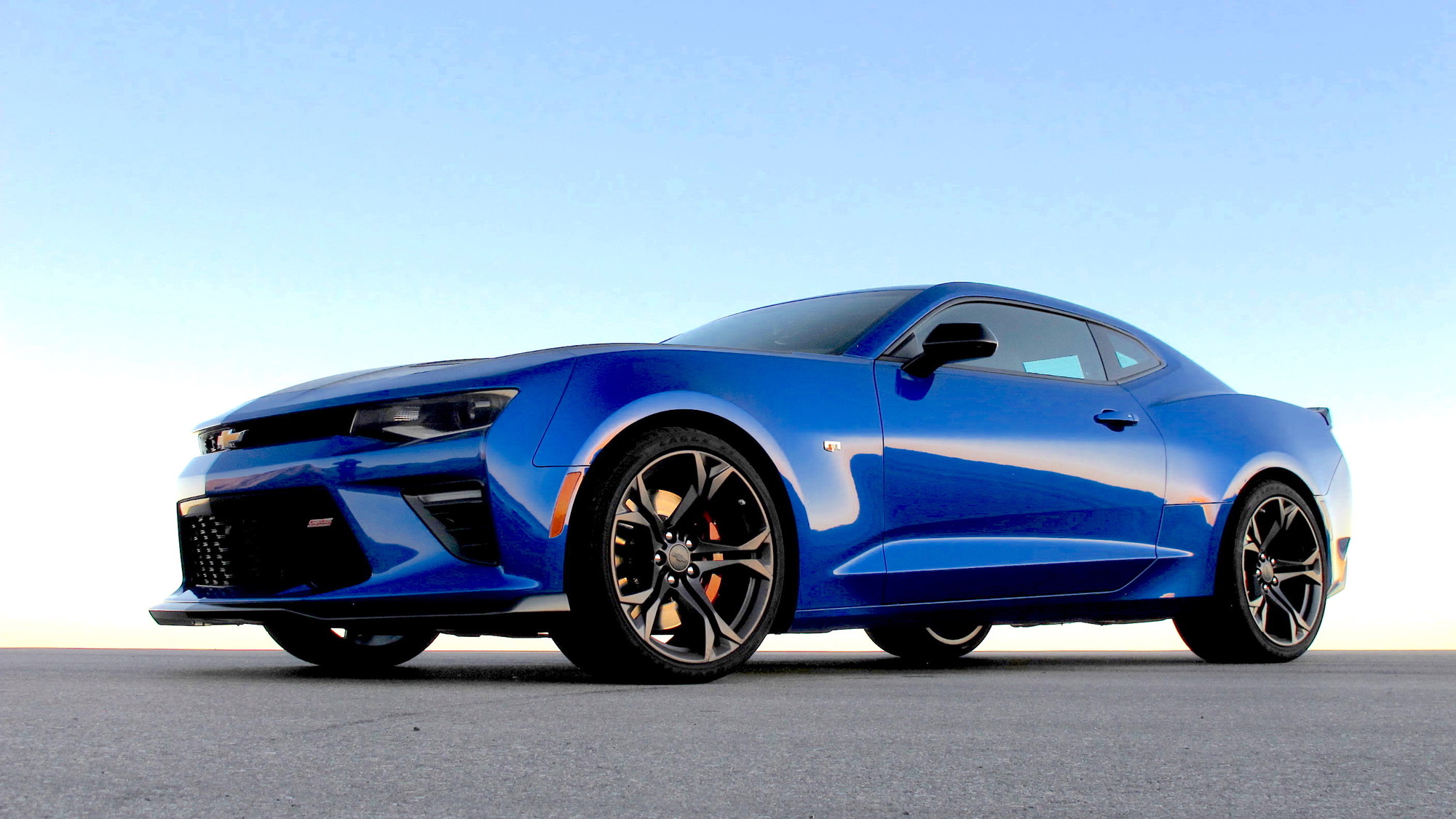 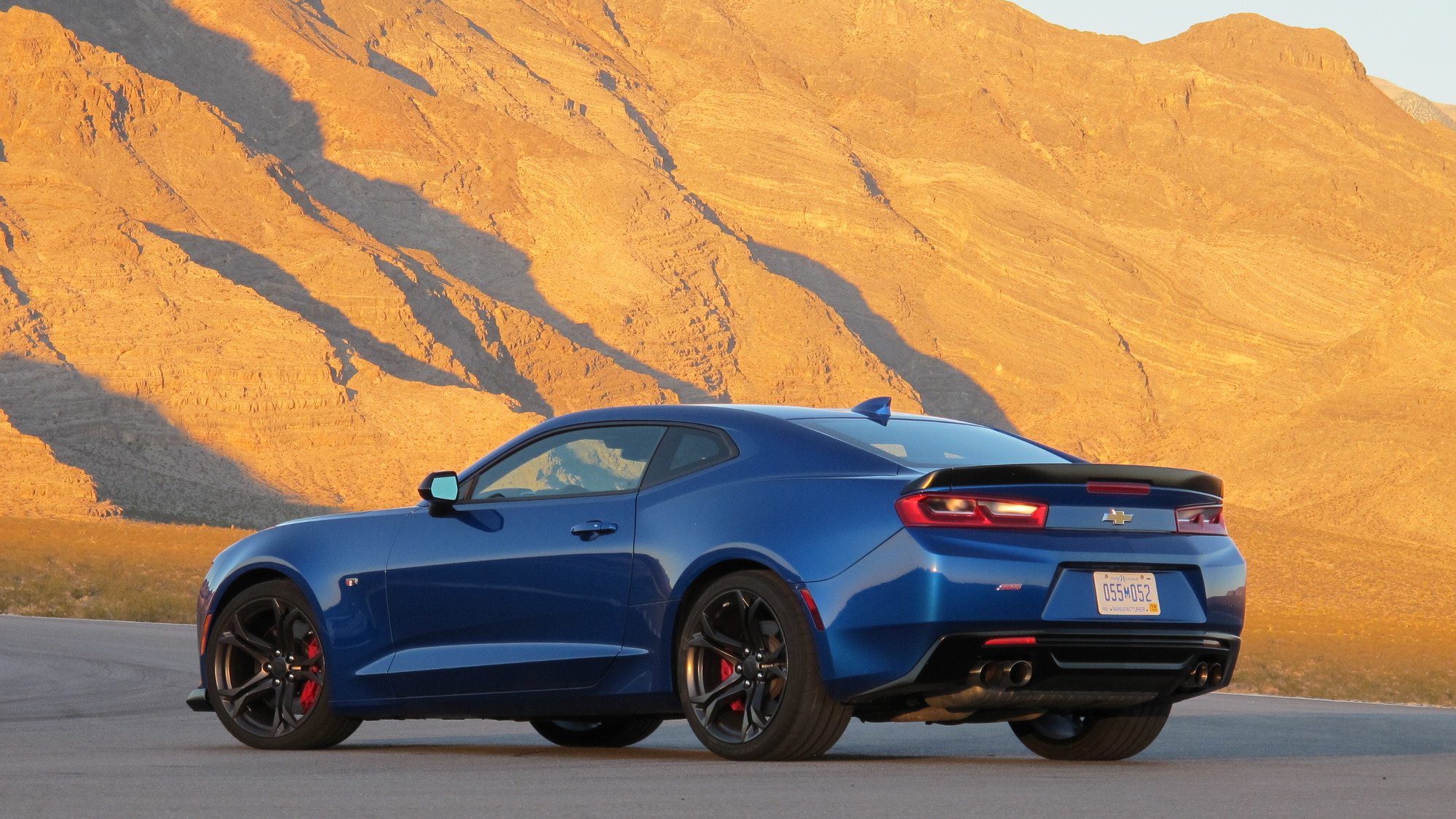 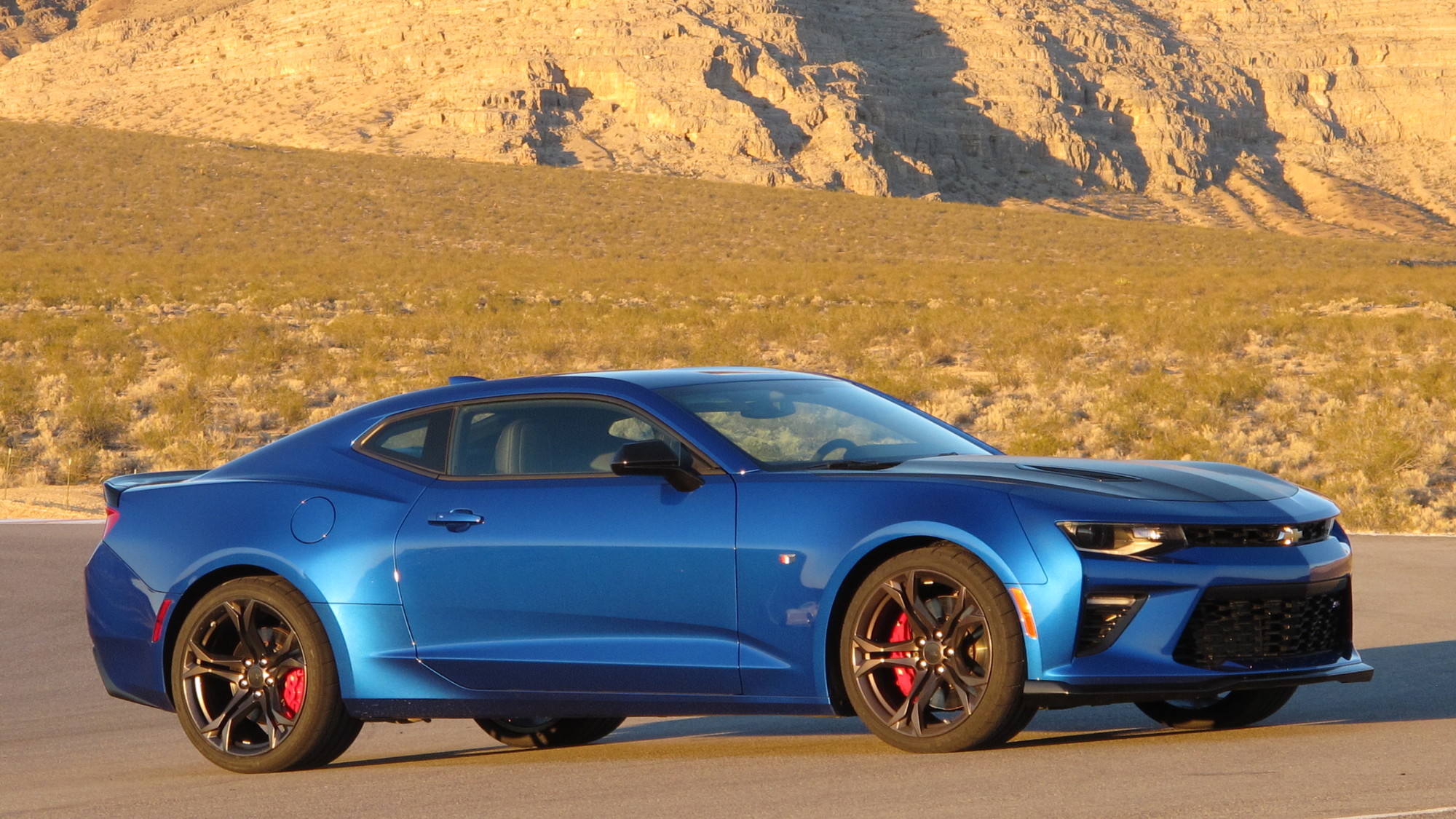 I’m in the base model, on a pencil-straight desert road, and I already love this car.

Even with the V-6 engine you can get in an Impala, the 2017 Chevrolet Camaro 1LE has already wormed its way into my heart. The immediate steering response, the feel of the suede-covered steering wheel, and the short throws of the manual gearshift make it clear that the 1LE has the heart of a world-class sports car.

Best of all, the fun hasn’t even started. Track time is yet to come in both the V-6 and V-8 versions of the 1LE.

A pair of track packages

The 1LE package is essentially a track package, but it’s really much more than that. It’s a complete integration of performance parts into the Camaro. It’s part of a “flow down” approach to performance in the Camaro lineup, with top-end ZL1 parts flowing down to the V-8 1LE and SS parts flowing to the V-6 1LE.

The FE3 suspension package from the SS underpins the V-6 1LE. It consists of stiffer dampers, rear cradle mounts, and ball-jointed rear toe links and stabilizer bars. The V-6 1LE also comes with 12.6-inch front and 12.4-in rear Brembo brakes with 4-piston front calipers, a manual locking rear differential, and a dual-mode exhaust system. A set of 20-in Goodyear Eagle F1 ran-flat tires—245/40 front and 275/35 rear—ride on 8.5- and 9.5-in black forged aluminum wheels.

The V-8 version builds on that equipment. Most notable is the addition of the FE4 suspension, with stiffer tuning and General Motors Company's [NYSE:GM] Magnetic Ride Control adjustable dampers. The tires are massive 285/30R20 front and 305/30R20 rear Goodyear Eagle F1 Supercar summer performance treads on 10- and 11-in satin graphite forged aluminum wheels.

Interior upgrades consist of Recaro front bucket seats and a head-up display. The Recaros are a $1,195 option in the V-6, and Chevrolet's Performance Data Recorder is a $1,300 option for the SS.

The venue for my 1LE drive is the Nevada desert. The street portion of the drive is a two-parter. On day one we start in Las Vegas in an SS model and head to Pahrump, the home of Spring Mountain Motorsports Ranch. Day two starts with a V-6 1LE drive, and ends with a few hours of track time in both models.

Both versions of the 1LE get no engine upgrades, and both come only with the 6-speed manual transmission. Still, they are both a bit faster than the standard V-6 and V-8 models they are based on, no doubt because their stickier tires and buttoned down suspensions put the power to the pavement better.

Chevrolet says the V-6 1LE can sprint from 0-60 mph in 5.2 seconds, two tenths quicker than the standard V-6. That’s as quick as the fifth-generation Camaro SS. The V-6 sounds like a barbaric yawp, too, its performance exhaust system opening up the muffler’s baffles and letting the engine sing a louder tune.

The short-throw shifter in both models requires little more than wrist action to move from gear to gear, and the clutch has a natural, easy feel, instead of the heavy feel you might expect. These are just two of the many elements that make the Camaro 1LE so satisfying to drive.

On the road, the V-6 1LE is clearly the more comfortable car. With the SS’s suspension, it rides like that car, which is to say firm and stable but forgiving over all but the harshest bumps.

While the SS benefits from the Magnetic Ride Control dampers, which are both adjustable and can react to different conditions, it is still very stiffly sprung, and that makes it jiggle and bobble over consistently broken pavement.

Chevrolet boasts that the Camaro 1LE can put up some impressive track times and performance figures. For instance, the new, 455-horsepower SS 1LE is 0.04 second quicker around Laguna Seca than the 505-horse fifth-generation Z28. It is also three seconds faster around Virginia International Raceway than a base SS, and the V-6 1LE is two seconds quicker around the track at GM’s Milford Proving Grounds than the fifth-generation SS. Quarter-mile times are impressive, too: 13.7 seconds for the V-6 and 12.5 seconds for the V-8.

That’s all well and good, but how do the 1LE models feel on the track?

To ready the 1LE ready for track duty, I tap the drive mode selector until I get to the Track mode (the V-6 1LE has a Track mode while other V-6 models do not), then double tap the traction control button to activate the Competition mode. In the V-6 version, that’s the extent of it, but the V-8 adds five Performance Traction Management settings that both shut off the traction control and loosen up the stability control to various degrees. In the SS, I opt for the PTM’s Sport 1 setting and activate the active rev matching by clicking one of the steering wheel paddles. Now it’s time to head out on the track.

I start out in the V-6 model behind another journalist and an instructor, both in SS models. After a couple of warm-up laps, the instructor takes off and I soon fall behind. I’m giving it all I got, but the pull of the V-8 is just too great in the straights.

It may be falling behind, but the V-6 1LE is right at home on the track. The quick, connected steering helps me place the car exactly where I want. The suspension is settled, and the car maintains a lot of grip. In fact, Chevrolet says the V-6 1LE is capable of sticking to the pavement to the tune of 0.97 g on a skid pad. That’s in a constant, circular turn, but here on Spring Mountain the car’s g meter is maxing out at 1.25 gs.

As I try to catch up to the faster V-8 cars, I push it too hard into a couple of corners, and the front end starts to slide. I get harder on the brakes, though, settle the weight over the nose, and the nose tucks in and the car rotates willingly. For the most part, those brakes hold up well, but the pedal does get a bit spongy by the end of what has been almost six hours of track time.

Next up is the V-8 1LE, and now it’s my turn to make the V-6 driver eat my dust. The V-8 simply offers more of everything. With more power, more grip (1.02 lateral gs), and more brakes, it's more fun. The V-8 carries bigger speeds; it’s about 15 mph faster in the longest straight, and the wider tires let it handle more speed through turns. The brakes are more robust, and I detect no fade or pulse at all.

With the V-6 or V-8, the 1LE is buttoned down, flowing from corner to corner without drama. This trait becomes more apparent when I get into the BMW M4 that Chevy has on hand for comparison purposes. On the track, the BMW accelerates quicker than the Camaro and manages an extra mph or two at the end of the big straight. But get it into a corner and you can feel more body lean and less stability than you get in either Camaro 1LE. I’d hazard a guess that the V-8 1LE is a second or two faster around this 2.1-mile track than the BMW, which runs $20,000 more.

We love the sixth-generation Camaro, so much so that we named the Camaro SS the Motor Authority Best Car To Buy 2016. The Camaro 1LE takes the innate goodness of the Camaro and gives it true track chops.

Then again, the V-8 1LE offers more power, bigger brakes, and faster track times. It’s at least as quick as a BMW M4 on a track for tens of thousands less. We’d rather drive the V-8 1LE on a track, but we’d find the V-6 version easier to drive every day.

We recommend both. Whichever one you choose, you’ll find the Camaro 1LE is more than just a track package; it’s a fully integrated performance bargain.