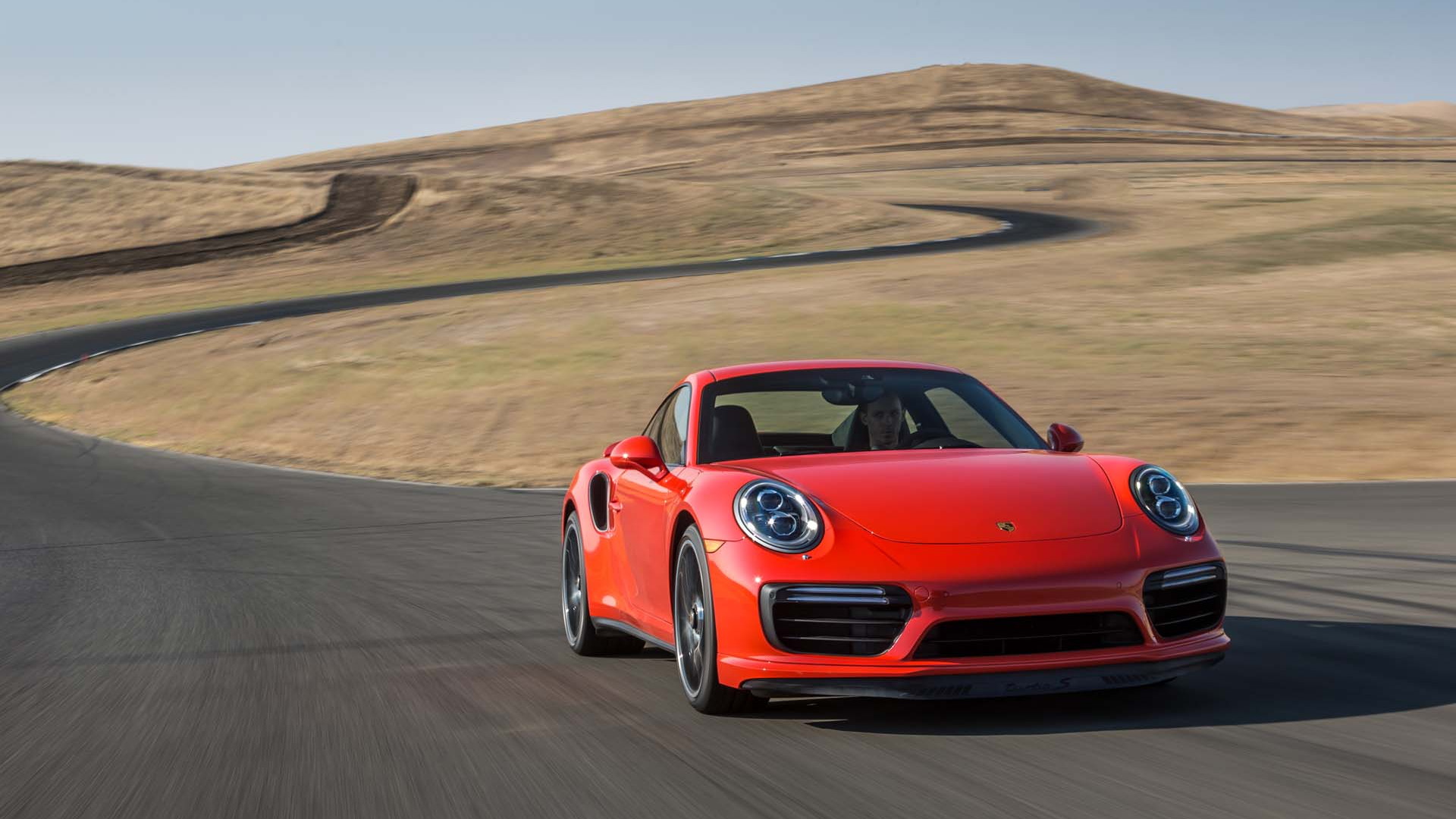 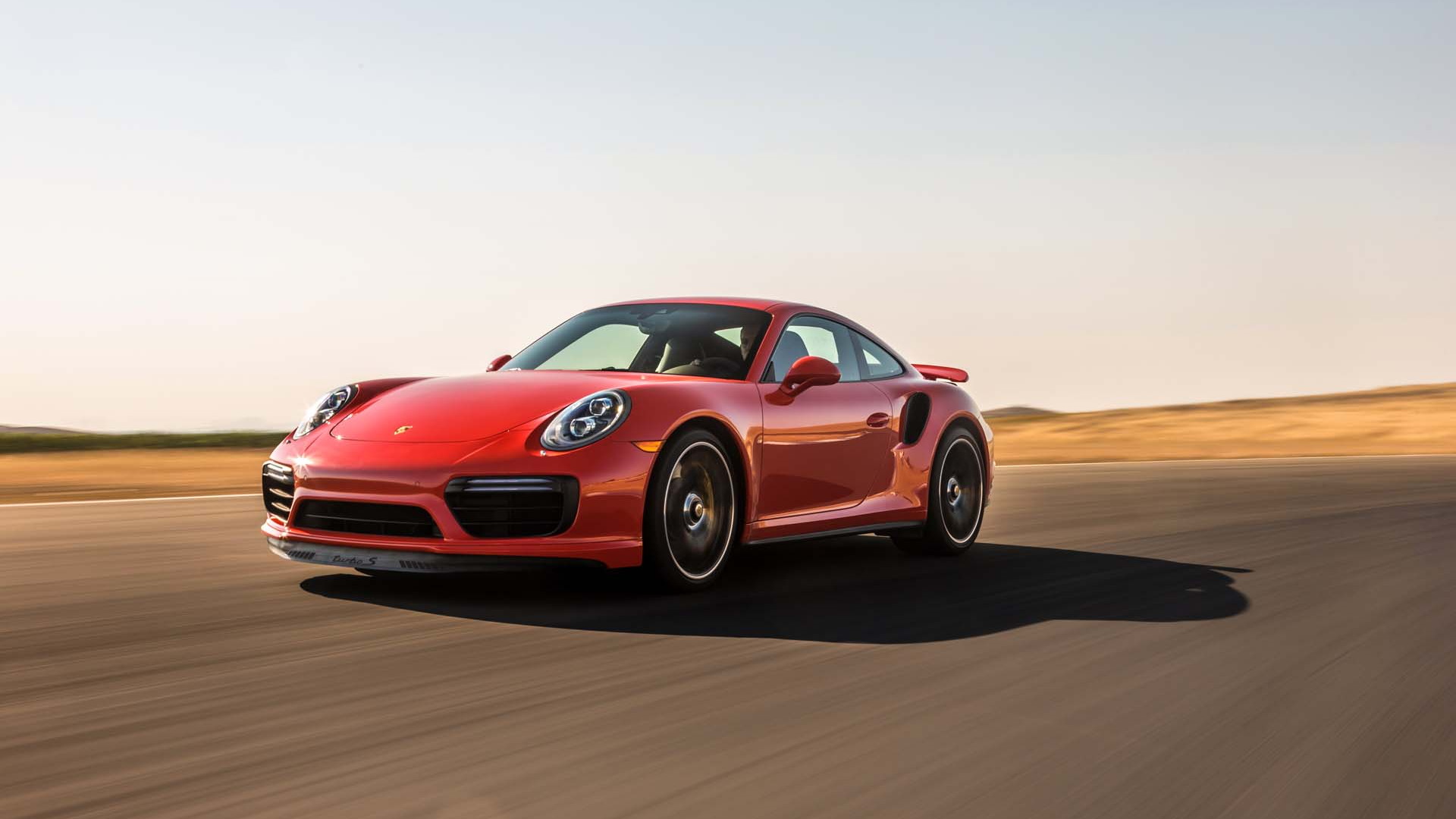 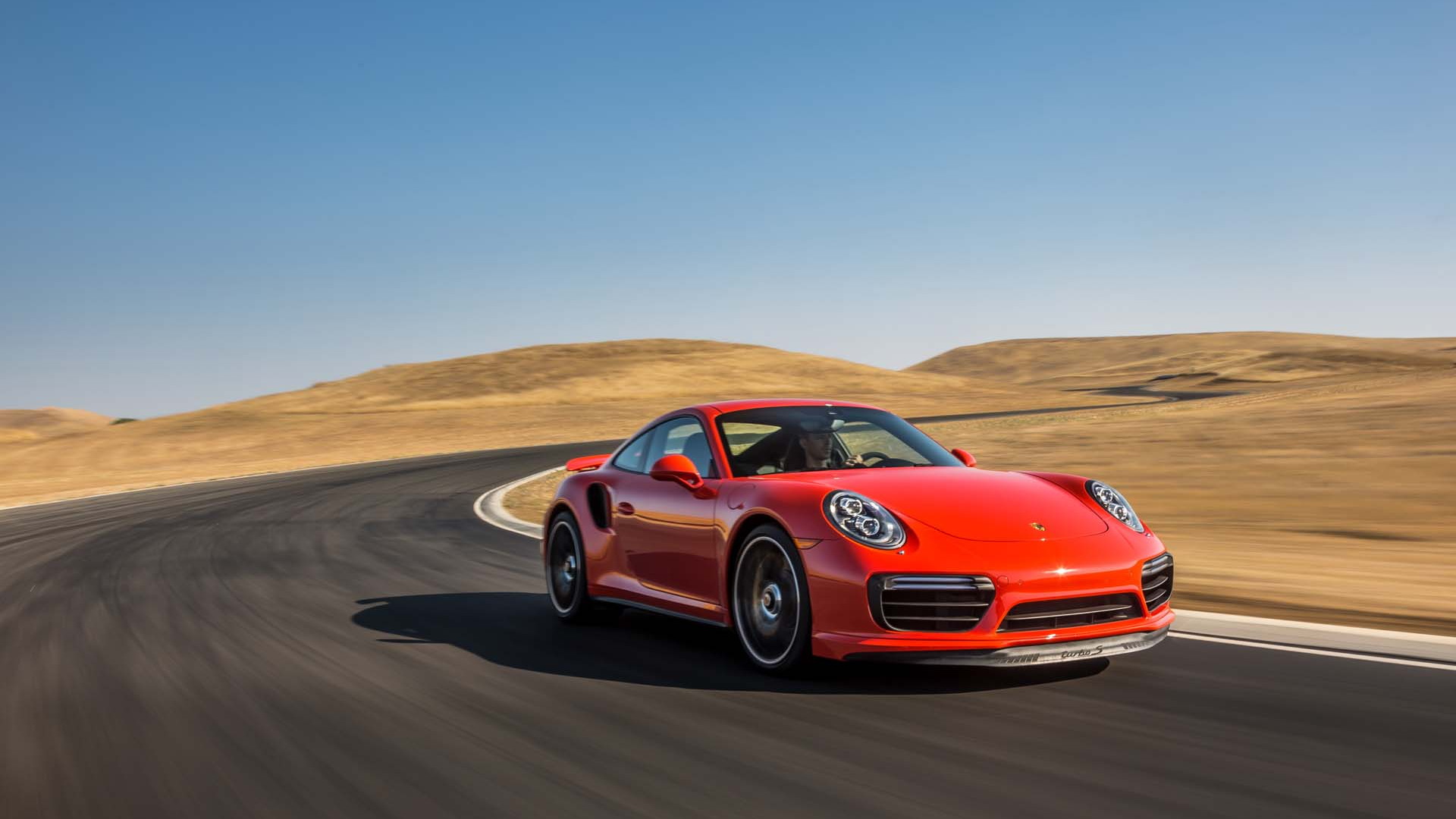 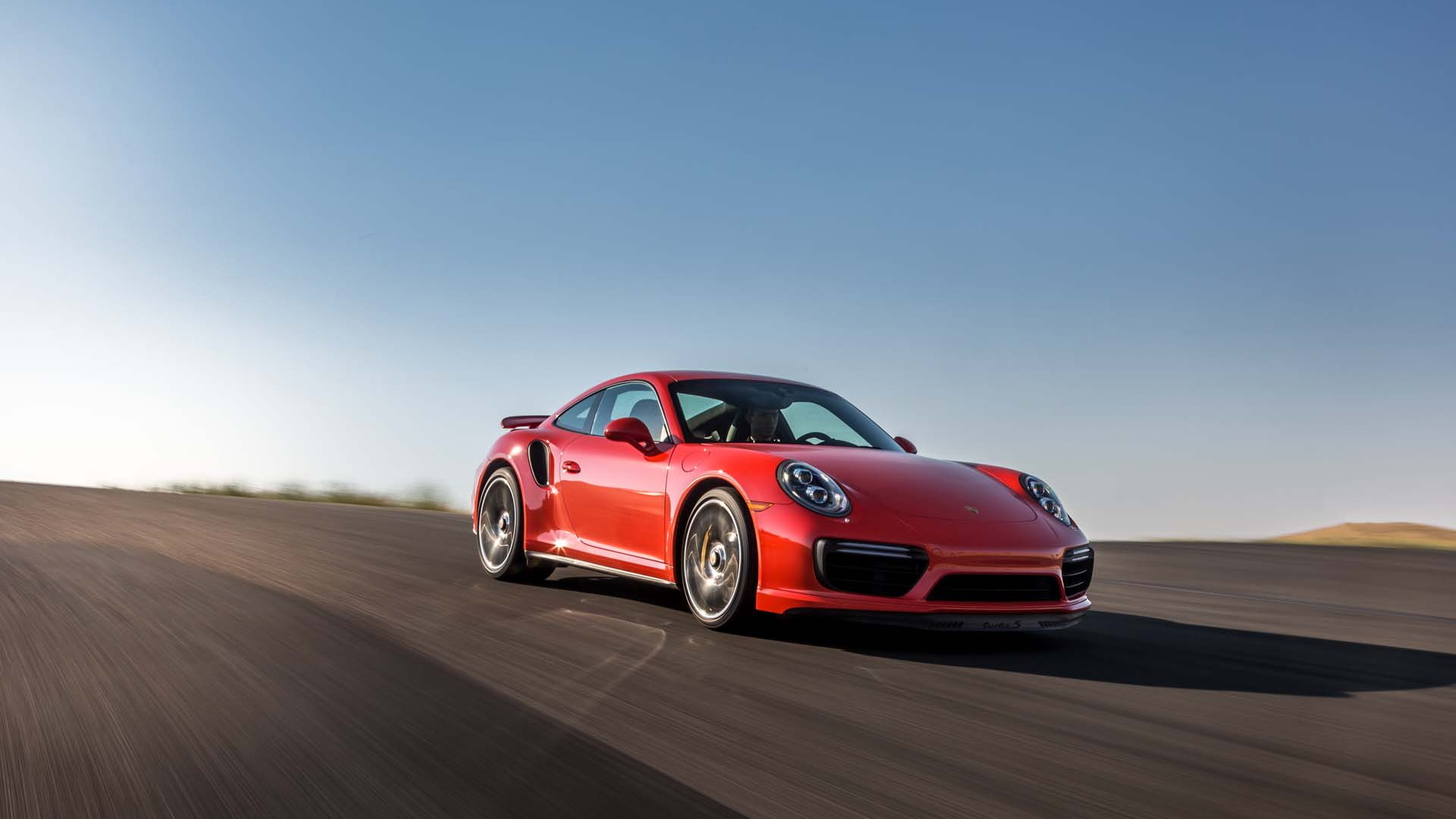 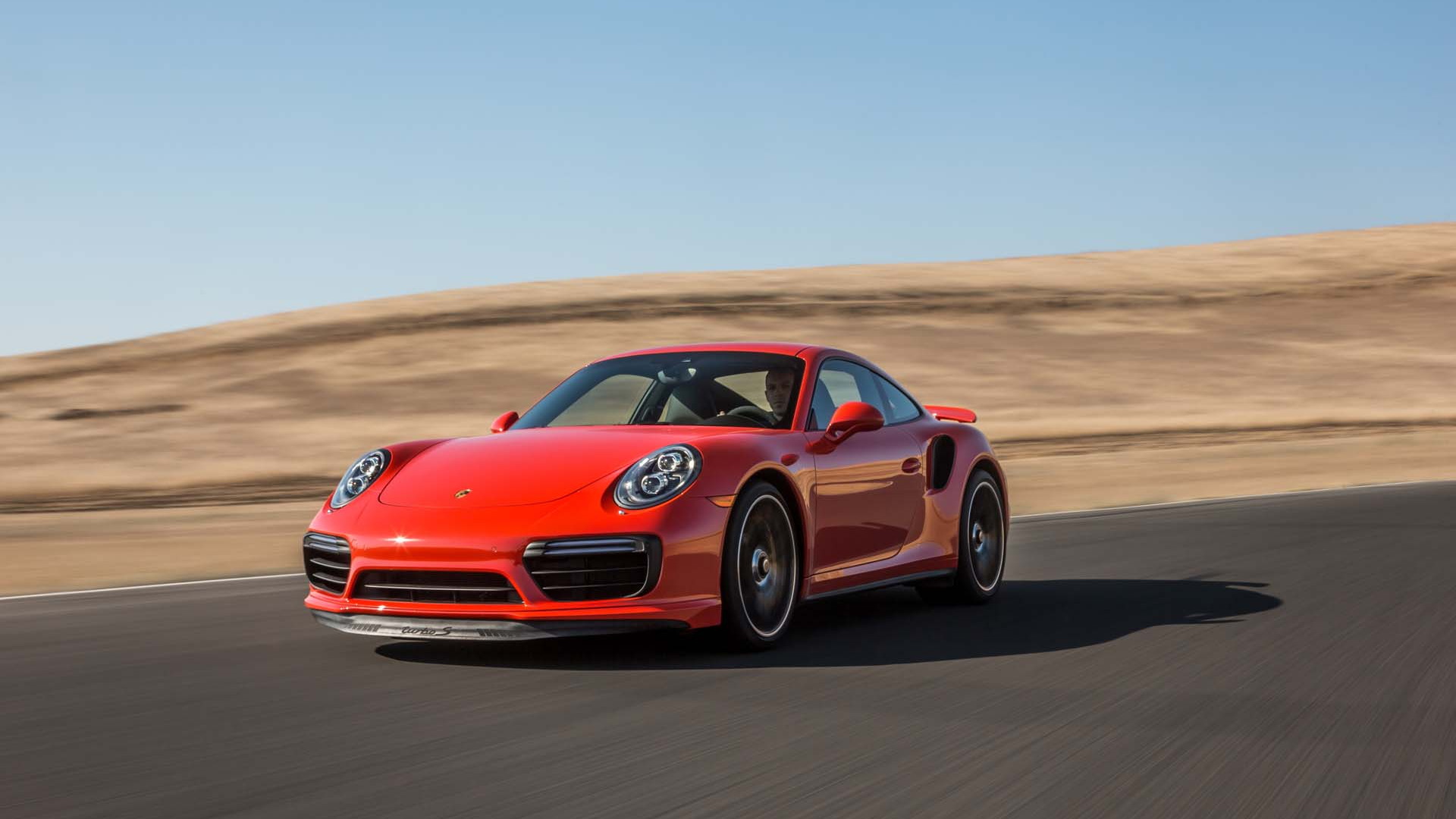 In many ways, it's coarse and gruff—the way a 911 Turbo should sound. Noise from the turbochargers force-feeding a 3.8-liter flat-6 to within an inch of its life howl through the straights, rear tires wail from roughshod grip to claw at least 540 horsepower down to the pavement, and 6-piston pinchers scrape 16-inch front rotors to slow its prodigious momentum.

There's hardly a moment of silence in this car.

There will be soon.

Lessons learned from the hallmark 918 Spyder teach us that electrification is in the mail. Few Porsche owners are scared anymore. Like water cooling or mid-engine Caymans, the world is waiting for Porsche's next move with its super sports car, and the 991.2 911 Turbo could be the final parry before another plunge into internal combustion-only's heart.

You can't shave 16 seconds off a 'Ring lap time without a bigger boost.

Although the 2017 911 Turbo only adds 20 horsepower over last year's model, the way its delivered is the headline this time around. Borrowing tech from downballot Porsches such as the 718 twins and 911, the Turbo adds a lag reduction system that keeps the pressure building, even if your bravery has faded. Keeping the throttle open without using fuel keeps at least 1 to 2 positive psi charged in the turbos, ready to uncork according to your courage.

The power feels savage and immediate, from 2,000 rpm all the way up to its peak at 5,500 rpm. It's impossible to miss the turbo scream and mechanical whine, but the power isn't lumpy or unpredictable this time. Variable turbine geometry and constant pressure from the turbo combine in force. The engine is always waiting for you.

The 911 Turbo and 911 Turbo S are further apart on the family tree this year, but still on the same branch. The Turbo S gets its own turbocharger this year (instead of a boosted version of the Turbo's), but the performance gap between the two models stays the same. The Turbo S still has 40 more horsepower than the Turbo—580 hp in the S—and 30 more pound-feet of torque—513 lb-ft, or 553 lb-ft with overboost. Both cars run up to 60 mph from a standing start a quick tick faster this time around: 2.9 seconds in the Turbo, 2.8 seconds in the Turbo S. Both get a 2-mpg bump from gearing and turbo efficiency. Germans and precision, you know?

The 540 horsepower found in the Turbo would be more than enough in every situation, except one: following a Turbo S down the front straight at Thunderhill Raceway Park on a sunny Wednesday morning. The Turbo can find low lap times with the right exit speeds and smarter lines, but the Turbo S can squat and run with all thumbs behind the wheel. Going that fast shouldn't be this easy.

The speed is never comfortable, never boring. In the way that the 930 Turbo was savage, the 991.2 is equally disarming and wholly different. With tire pressures up after a few dozen laps at Thunderhill, the new 911 Turbo never stops moving around you. It's always exploring the limits of its driver—never the other way around. Drop the tire pressures back down into the 30s and its movements become a little more exaggerated.

It amplifies when the car settles into a neutral stance, but doing so rolls up on the 20-inch Pirelli P-Zero's sidewalls from Turn 5 into 6 at Thunderhill in a way that demands an iron will—and an iron stomach. There's grip everywhere in the tires, I hear.

Sport Chrono comes standard in every Turbo and Turbo S this year, and with it is a steering-wheel-mounted drive selector that firms up the dampers, activates the commensurate aerodynamic settings, and sharpens throttle response. Flipping from Individual to Sport and Sport Plus won't require drivers to pull their eyes away from the quickly approaching horizon, a small click wheel at the bottom of the steering wheel is enough.

A push-to-pass button in the middle of the remote delivers 20 seconds of overboost, or just enough time to separate passengers from their lunches. (Sound familiar? It's borrowed from the 918 Spyder, and yet another reminder that the company is looking at that mid-engine warship for its future.)

None of the driving modes completely disable stability control, not that you'd want them to either. Porsche Stability Management can be toggled from normal, Sport, and off by a button near the gear selector, which should be immediately covered with electrical tape and be forgotten entirely. Yes, the 911 Turbo is scary without computers.

It's more interesting to hear Porsche engineers talk about how the 911 Turbo is more tame than it ever has been.

Rear-wheel steering helps maneuver the 911 Turbo around a track and at low speeds, and can cut its turning circle by more than a foot under 30 mph by steering the rear wheels in the opposite direction. An optional front axle lift system raises the nose by 1.5 inches over tall speed bumps or finicky driveways. Blind spot monitors keep vigil at the rear, in the rare moments traffic sneaks up behind a 911 Turbo.

Yet, the 911 Turbo won't be confused for a grand touring car any time soon. The carbon-ceramic brakes, which are standard on the Turbo S and optional on the Turbo, need heat to quiet down. Cast iron on steel rotors on the Turbo do just fine—and actually provide a more natural pedal feel on the track, briefly—but the confidence of ceramic composite material is too tempting to ignore, even for $9,200 extra.

Ride quality in the Turbo is more pastoral than some may be expecting. Compared to the DB11's softly sprung ride and wafty rear end, the Turbo feels (and sounds) grainy, but connected. Turning down the dampers and throttle makes for a slightly more civilized ride, but noise from the rear tires never truly disappears. If this is a problem: 1) Cheers to your great success in life; 2) Turn up the optional $3,700 12-speaker Burmester stereo.

It takes a moment to recognize the 2017 911 Turbo from its predecessor, but the details read wider this year. At just over 3 inches wider than a 911 Carrera—1 inch wider than a 4S—the 911 Turbo's new front fascia and 3-D taillights exaggerate the tale of the tape. Chrome- or black-tipped exhausts are your giveaway to Turbo or Turbo S variants if the extra letter on the tail isn't enough, and a new inlet on the decklid are visual cues that it's the newest model on the road.

CHECK OUT: A Koenigsegg Agera RS piston weighs less than a human heart, and other fun trivia

Like any modern Porsche, the 911 Turbo can be specified in myriad ways that suit tastes for a car that starts at $159,200. We doubt there will be many base editions built, and most will have tens of thousands in options piled on that add up faster than compound interest. Porsche's product planning is the 9th wonder of the world, we suppose.

Driver and passenger (we hardly recommend more than one in any 911) get the latest efforts from Porsche's interior engineering department, which can be easily overlooked, and will be. A smaller steering wheel in the Turbo than in the 911 instills the feeling that you're grabbing the Turbo by the ears and holding on for well-being—like wrestling a bear. That's very noticeable.

Thunderhill is too long to memorize, too short for a Porsche 911 Turbo.

Its new course adds elevation and takes it all away in 4.6 miles, one of the longest laps in the country. Building up to the top of the Cyclone hill, a blind right Turn 5 that's so long that it gets a 5A appendage, is easy for the Turbo—the incline scrubs speed for you. Unwind into Turns 6 and 7, decreasing radius left-handers that track the car out toward the right edge of grip and reality, and the Turbo's active roll bars manage lateral loads with shocking ease. Mat the right pedal and double check the insurance policy.

The track's second blind crest is where the 911 Turbo defines its character, and yours. The track's second big elevation gain falls away into a handful of corners that have no name—just plenty of four-letter adjectives. Riding along with three-time LeMans winner and Porsche driver Hurley Haywood reveals that the 911 has enough brakes to gather the car, even if the front end is unloaded, but it's not a conclusion most would arrive to on their own. Nail it and you'll never complain about carbon ceramics again.

The straights handle their own in the Turbo and come and go at more than 140 mph. The Turbo S is the first 911 Turbo to breach 200 mph at its top end and it's every bit as believable. Breathe in. Breathe out. Next lap.

Yet driving a 911 Turbo at full speed is more of a question than an answer. Am I fast enough? Will it ever give up? Is this the end of turbo lag?

But ask Porsche engineers if this is the last 911 Turbo before becoming a hybrid?