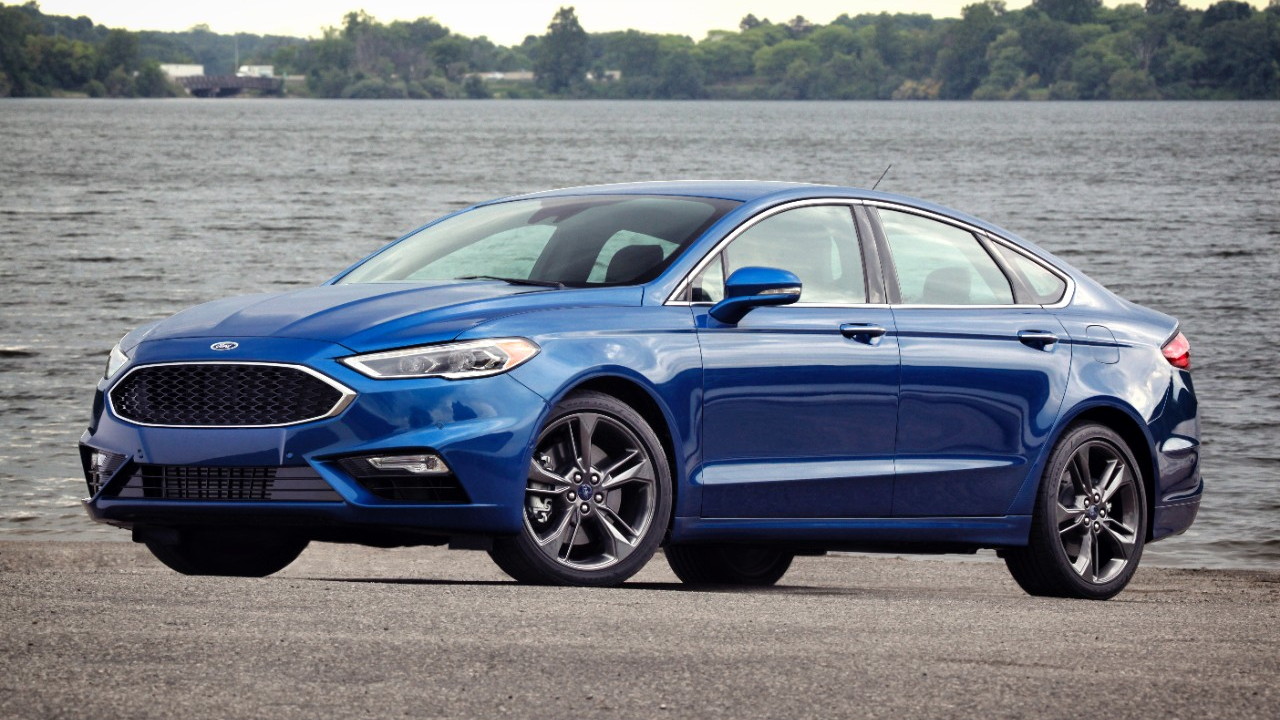 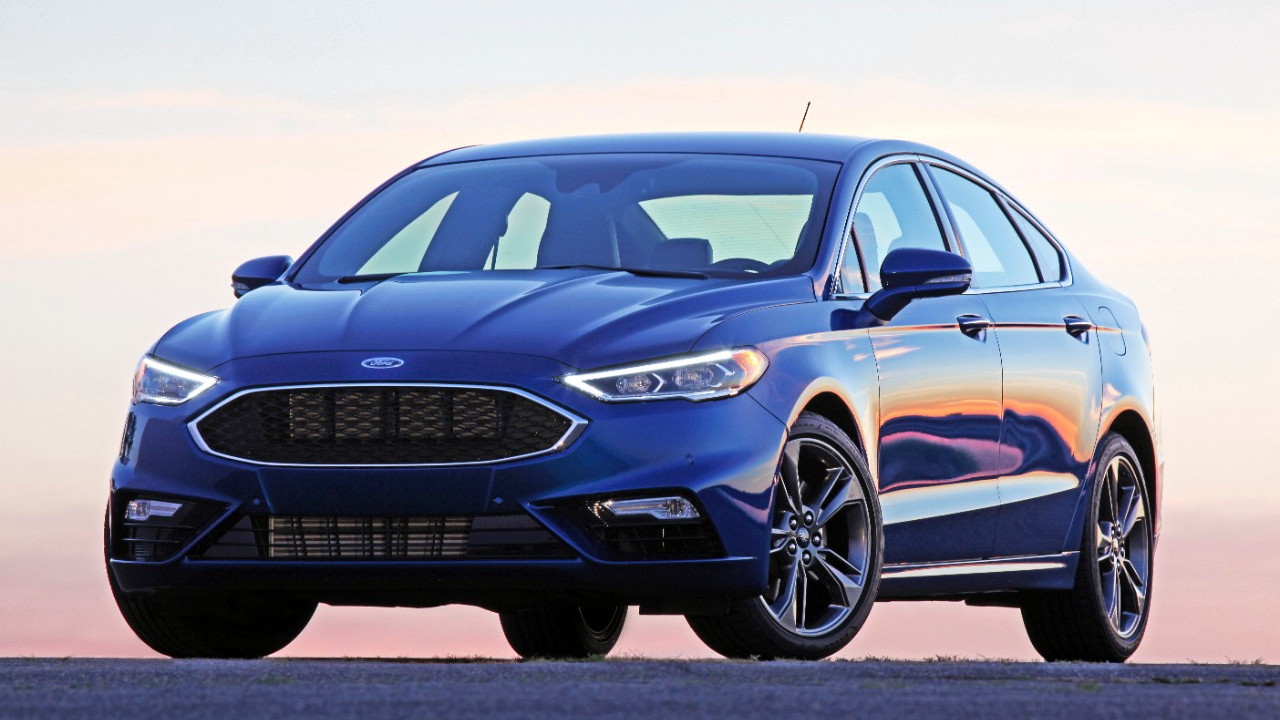 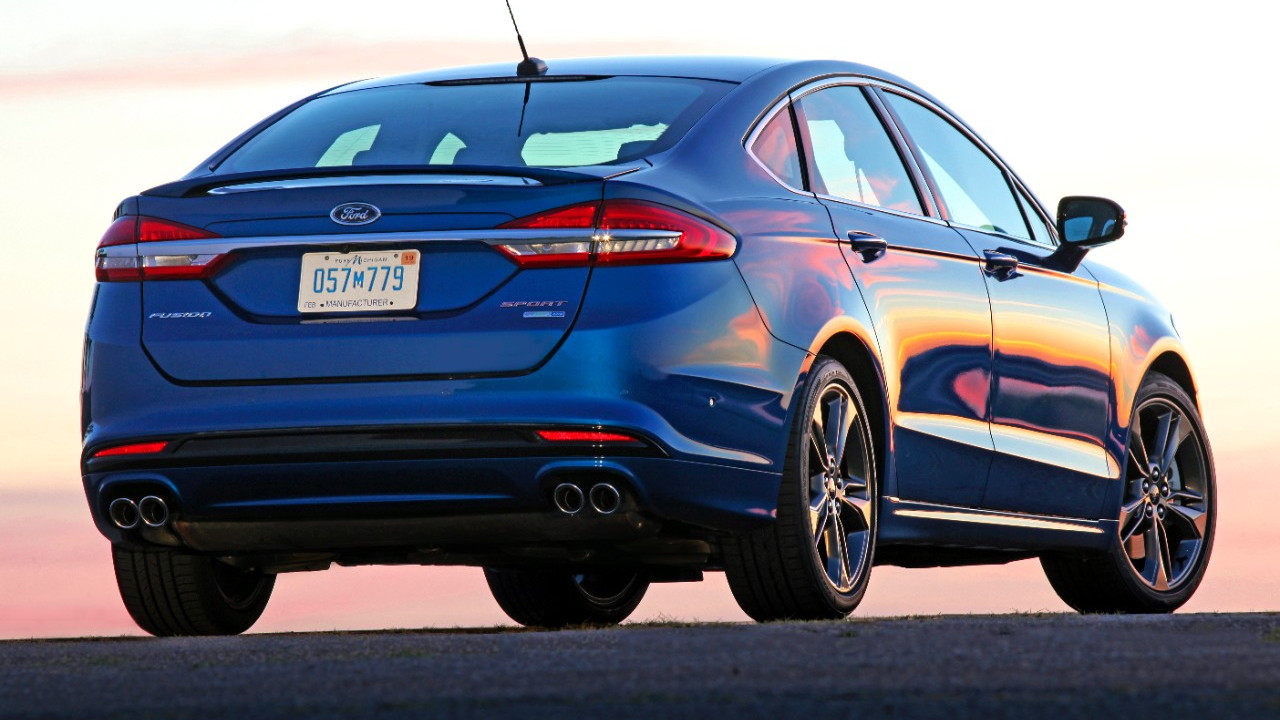 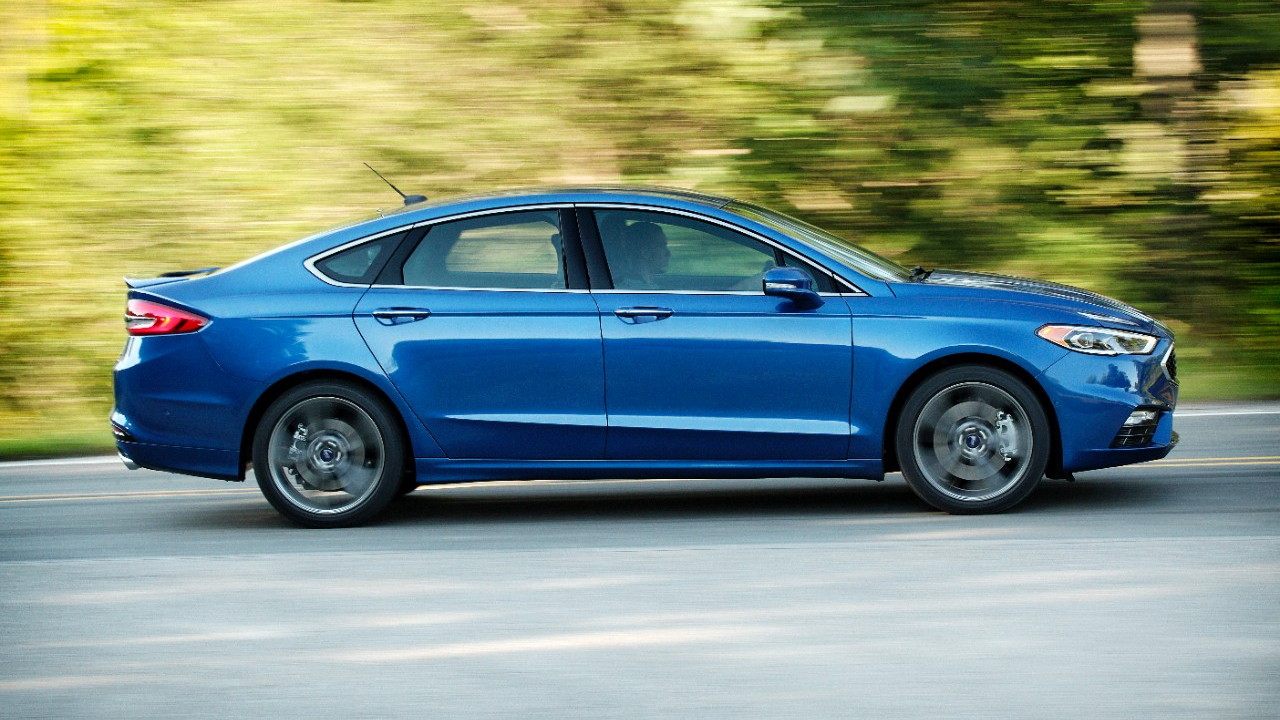 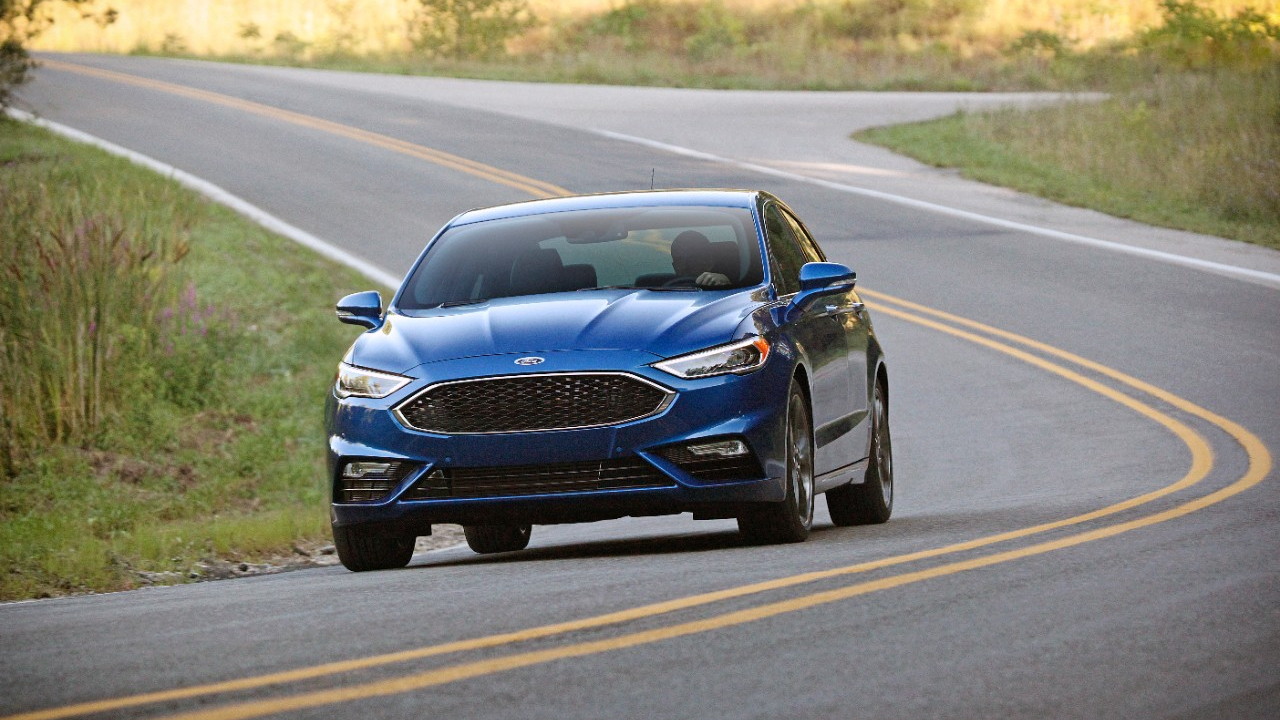 Now Ford Motor Company [NYSE:F] is going the other way. For 2017, the Blue Oval is installing a premium engine, its EcoBoost-branded twin-turbocharged 2.7-liter V-6, in the mainstream Fusion sedan. Will it be a disaster or a godsend? I drove the car on Ford's home turf in Michigan to find out.

Not just a Fusion with a big engine

You don't just throw a twin-turbo V-6 into a front-drive sedan and expect the car to handle it. Ford had to make quite a few other changes to make the Fusion Sport a complete package.

That starts with standard all-wheel drive to send the power to all four wheels and avoid torque steer. The system is front biased, but it can send 50 percent of the power to the rear wheels when needed, such as during a hard launch. The power is routed through a 6-speed automatic transmission that is beefed up to handle all the torque.

The suspension is also unique. The MacPherson strut front and multi-link rear suspensions are unchanged, but the spring rates are optimized to handle the weight of the new engine. The big difference is the standard electronically controlled dampers, which can be set to Normal or Sport modes. This continuous damping control system constantly monitors the road and can adjust the dampers every two milliseconds. If the system detects a pothole, it will adjust the affected damper to its firmer Sport setting to prevent the tire from falling deeper into the hole and hitting harder on the other side. Ford says this system helps prevent tire damage due to potholes. That is especially important for the Fusion Sport because it comes standard with low-profile 235/40R19 tires (all seasons are standard and summer tires are optional).

The Sport mode also adjust the steering weight, transmission programming, throttle mapping, paddle shifters, and sound in the cabin. In Sport mode, the paddle shifters hold whatever gear the driver chooses up until redline.

Ford has made interior and exterior changes as well. On the outside, the front fascia is revised to provide more airflow for cooling, and the grille has a unique mesh pattern with a gloss black finish. LED fog lights join the Fusion's available LED headlights. The 19-inch alloy wheels have a dark finish, and the rear end features quad exhaust tips.

Buyers can choose any interior color they want as long as it is Dark Earth Gray. They also get leather and synthetic suede front sport seats, a black headliner, carbon trim on the dash, aluminum pedals, and a steering wheel wrapped in a soft leather. Acoustic laminated glass is used for the windshield and front doors, and active noise cancellation is standard. In the Sport mode, the active noise cancellation system lets in more of the engine's meaner, more sonorous sounds.

A sporty sedan, but not a sport sedan

So, how does the Fusion Sport drive? Well, it is certainly faster than its siblings, but it's not a sport sedan. The V-6 engine and its turbochargers and intercoolers add quite a bit a weight mostly over the nose. The addition of all-wheel drive also adds about 150 pounds. All told, the Fusion Sport weighs in at a hefty 3,982 pounds, 301 pounds more than an all-wheel-drive Fusion with the turbocharged 2.0-liter 4-cylinder and 544 pounds more than a base Fusion with the turbocharged 1.5-liter engine.

That means the car is quite nose heavy and therefore doesn't turn in to corners or rotate as willingly as it would if the weight were more balanced. Instead, if you approach a corner carrying too much speed, the car will tend to plow forward in a state of understeer. You really need to slow it down to handle sharp corners. The Sport mode helps rein in any excess body lean, and perhaps the optional summer tires would sharpen turn-in response, but the physics just don't work out in favor of making this car truly sporty.

The ride quality, however, is fairly impressive for a car with 19-inch wheels. Yes, you can feel the bumps more than you will in any other Fusion, but they don't pound through. Those active dampers appear to be doing a fairly good job of giving the Fusion Sport a ride quality at least as good as you will get in a V-6-powered Honda Accord.

Enough of the opening act. Let's get to the headliner, the twin-turbocharged 2.7-liter V-6. Under the hood of the Fusion Sport, this engine spins out 325 horsepower and a massive 380 pound-feet of torque. No mainstream midsize sedan breaks the 300-hp barrier and none come close to 380 pound-feet of twist.

Hop in, start it up, goose the throttle, and you are immediately aware that this car sounds better than any midsize sedan. Get on the gas and the engine lets out a "whumm" as it build revs, letting you know there is some serious power at your command. The sound fades into the background when you let off the throttle and is one of the best aspects of the car.

Take off from a stop and the car accelerates hard, but it doesn't pin you back in your seat like I thought it might. Ford isn't giving 0 to 60 mph times, but in my unofficial testing, I saw about 6.2 seconds. That's fast for a family sedan, but the Accord V-6 can match that time. I'd expect something closer to 5.5 seconds, and maybe someone better at launching a car could achieve a time that quick. The Fusion Sport is undeniably quick, but I expected a little more given all that torque.

The Sport mode makes the throttle a little more responsive and holds gears longer, but its transmission programming isn't all that aggressive. Ford calls it an "N - 1" strategy that basically means it's always one gear lower than it would be if Sport mode were turned off. Similar systems probably downshift two or even three gears in their Sport or Sport + modes.

After an initial drive on rural Michigan roads, I drove the Fusion Sport home to Chicago, covering a total of 249 miles. Over that mostly highway run, i averaged 23.4 mpg, which falls tidily into Ford's estimates of 17 mpg city, 26 highway, and 20 combined. That's decent fuel economy given the power and weight stats.

Pricing for the Fusion Sport starts at about $35,000 and the model I drove was priced at $41,350. For that money, which would you rather have, a premium car like the ATS with a pedestrian engine or a nice mainstream midsize sedan with an engine that makes it sound badass and go like blazes? I'll take the car that punches above its weight over one that plays down to lesser competition, thank you very much.