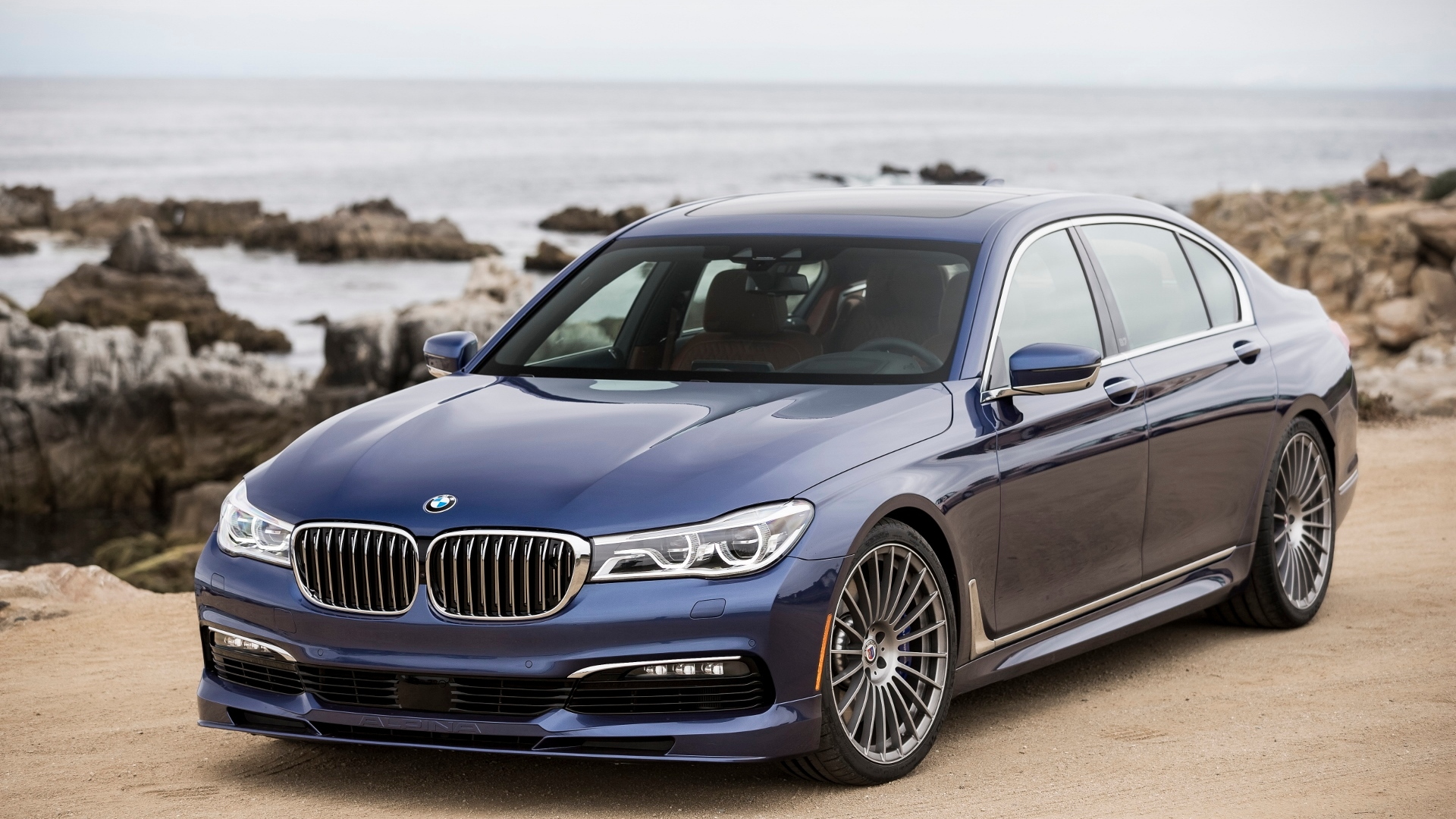 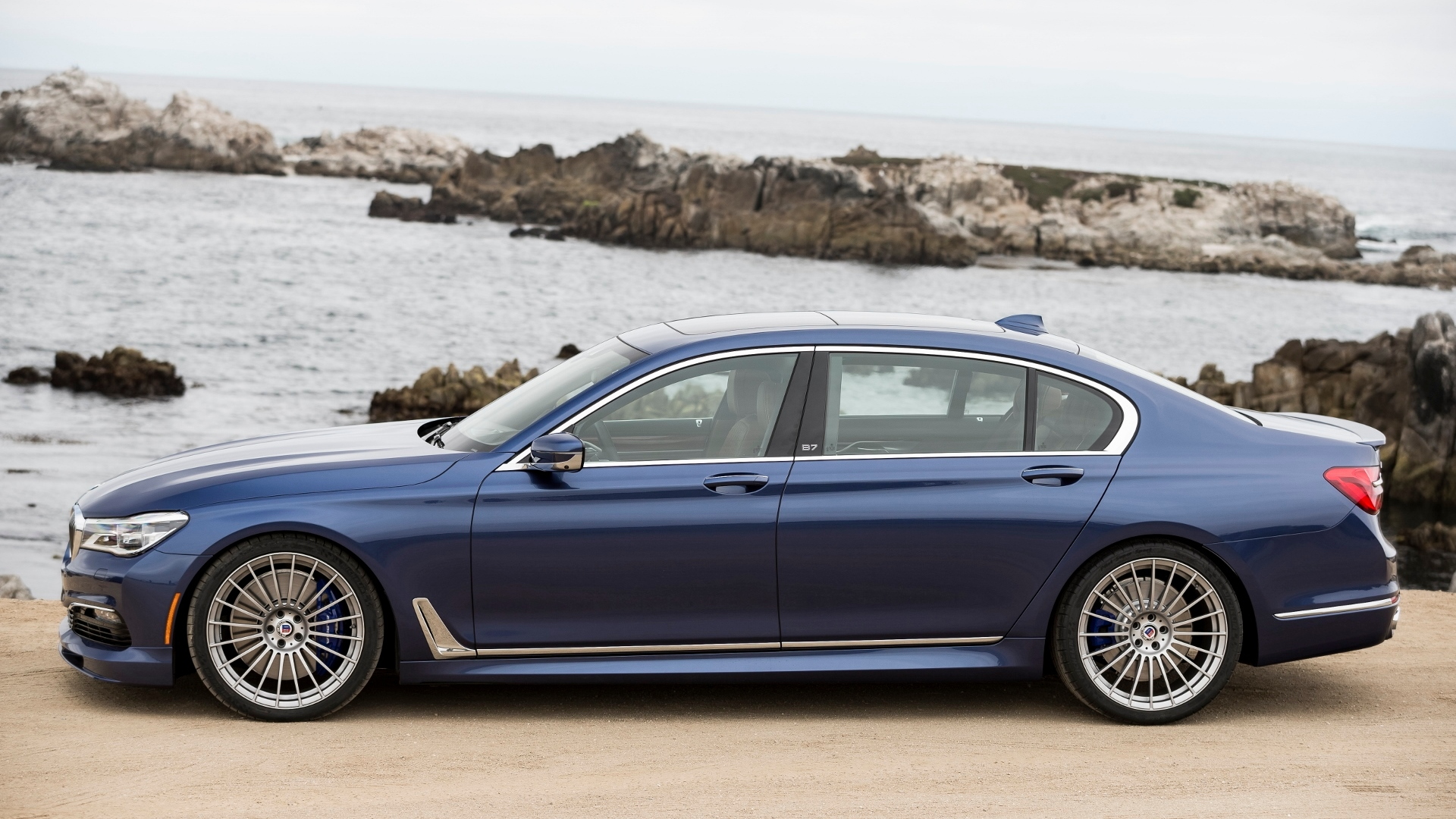 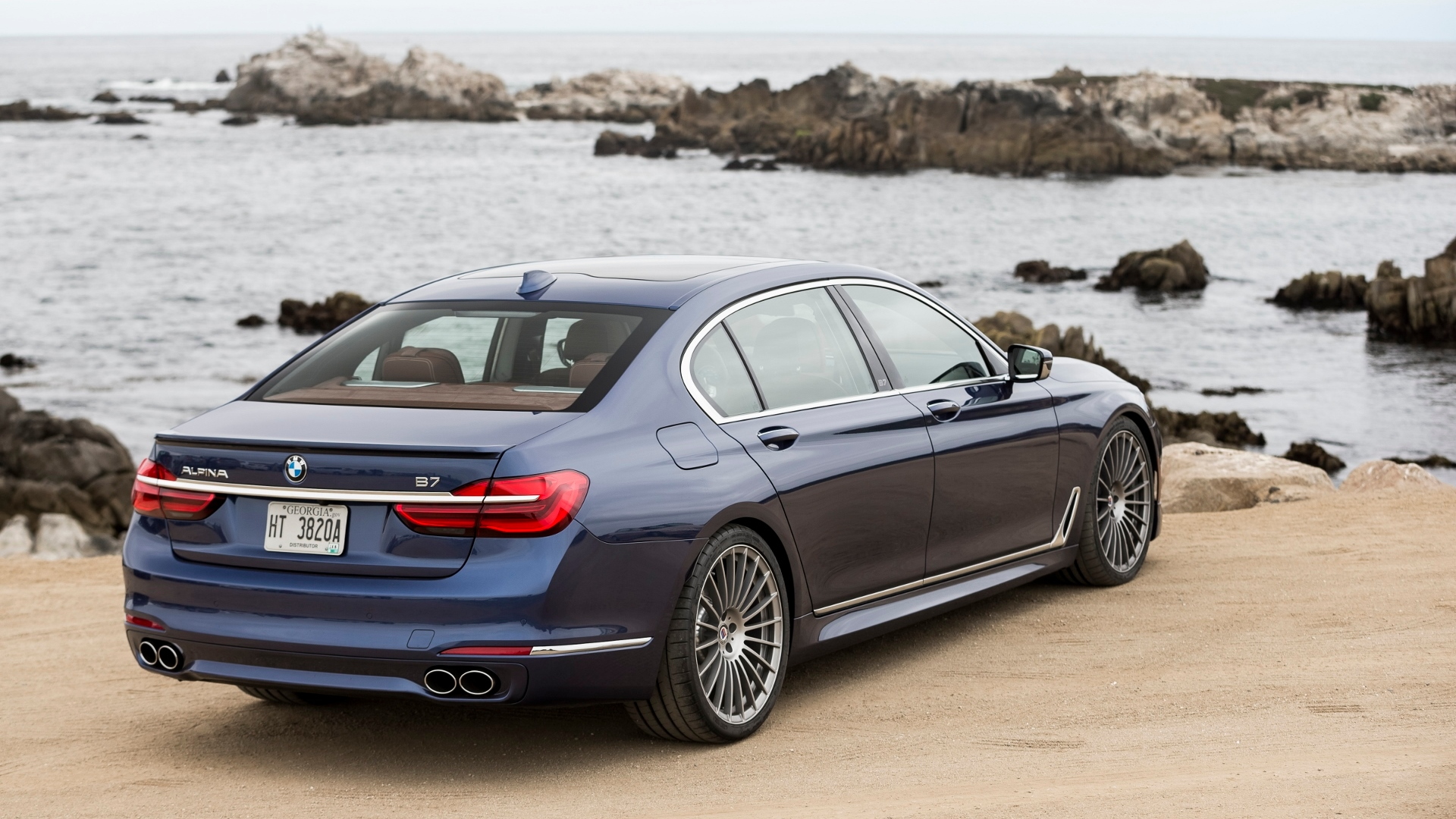 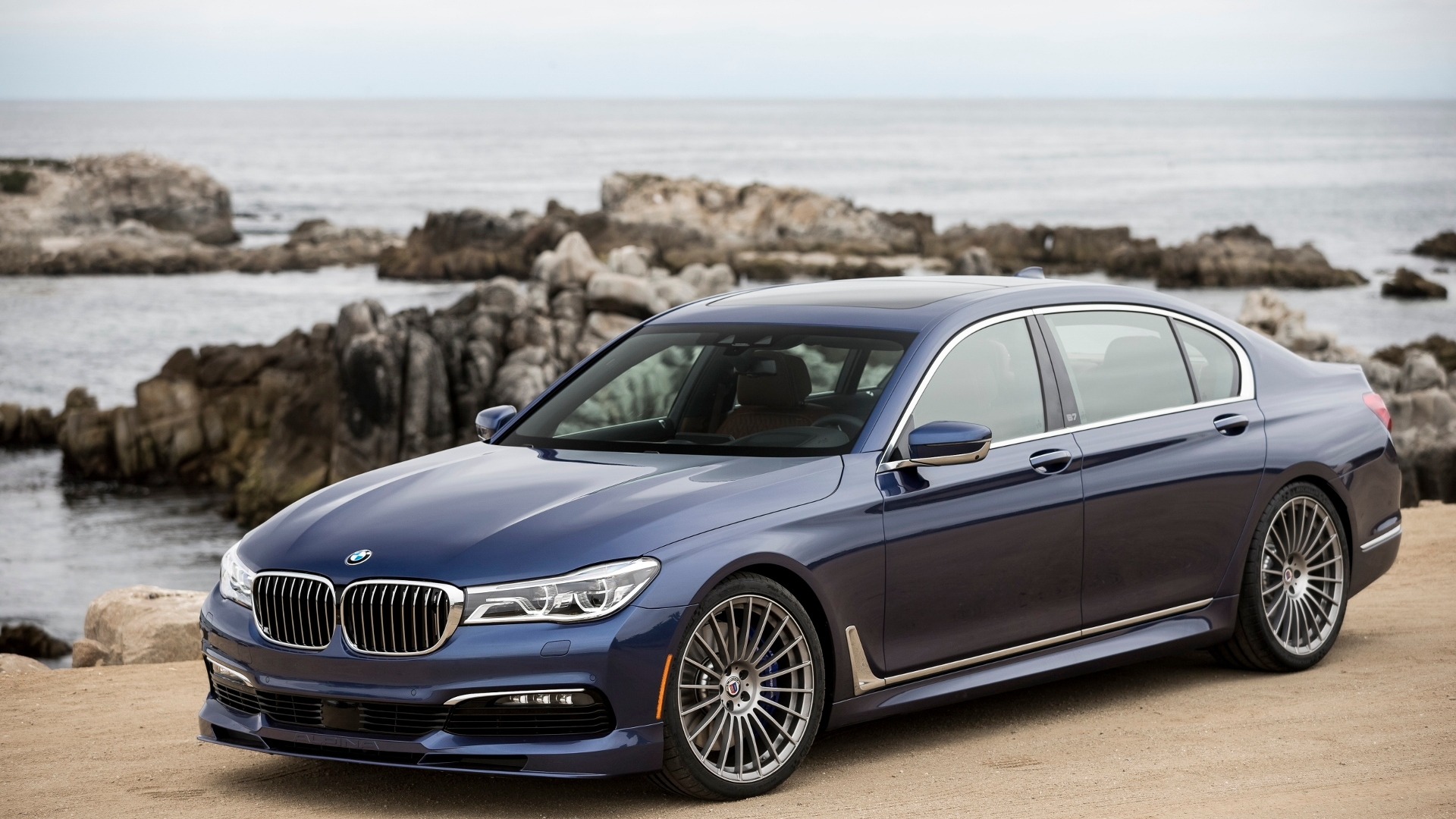 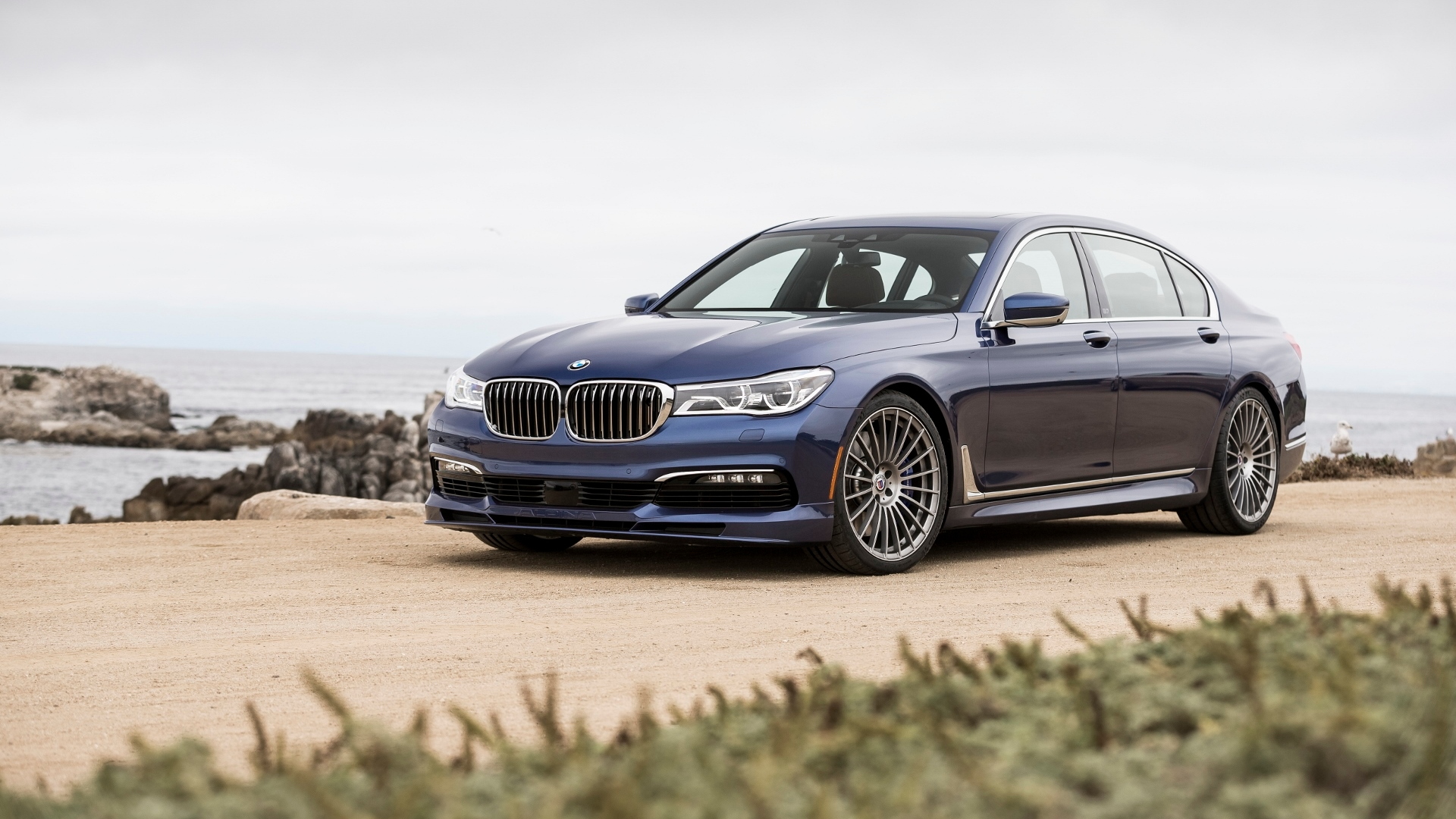 BMW’s flagship sedan, the 7-Series, has never received the M performance treatment. That’s OK, though—Alpina is here to help. In fact, the small BMW-exclusive tuner company does such a good job of building what is, in effect, an M7 that we doubt BMW could top it.

Alpina is a company of 230 employees that started out 51 years ago by offering a carburetor performance upgrade for the New Series 1500 sedan. The company has worked closely with BMW ever since, and their relationship took the next step in 2002 when BMW began offering an Alpina version of the Z8 roadster. Two years later came the Alpina-tuned 7-Series known as the B7.

The 2017 model year marks the third generation of B7. Hot on the heels of celebrating its 100th birthday during Monterey Car Week, BMW invited Motor Authority to spend an afternoon with the sports sedan. After driving it on Central California’s Monterey peninsula, and spending some time on the track at Mazda Raceway Laguna Seca, I can say that this is the M7 luxury performance buyers would want.

Unlike M cars, the B7 doesn’t aim strictly for performance. Alpina gets a 750i from BMW and modifies it to turn up both the performance and the luxury.

Modifications to the twin-turbocharged 4.4-liter V-8 aim to improve throttle response, low-end torque, and acceleration. To accomplish these goals, Alpina modifies the turbochargers, the air intake system, and the cooling system.

The turbochargers use Alpina-specific compressor housings that provide better airflow, while both the turbocharger housings and the turbine wheels get larger inlet and outlet diameters. Total boost pressure maxes out at 20 psi.

The unique air intake system provides better breathing and lower air intake temperatures. The intercoolers push 70 percent more volume than those of the last B7 and their inlet and outlet manifolds are optimized for flow, cutting pressure losses in half.

BMW’s new “Carbon Core” structure, which combines high-strength steel, aluminum, and carbon-reinforced plastic to improve body rigidity and reduce weight, acts as a great basis for the B7. Alpina raids the BMW parts bin for all the systems that can make the car handle better, but puts its own spin on things to max out comfort and performance.

Every B7 comes with BMW’s xDrive all-wheel-drive system, which Alpina has programmed for slightly more rear bias; it sends up to 90 percent to the rear wheels when dynamic traction control is active. Also standard are the two-axle air suspension, which lowers the car 0.8 inch in the Sport Plus mode; the active roll bars that fight body lean; the electronic dampers with Alpina-programmed settings that range from very comfortable to very sporty; and the Integral Active Steering, which features up to 3 degrees of rear steering angle to help virtually shorten or lengthen the wheelbase.

On top of that, Alpina fits a set of either 20- or 21-inch Michelin Pilot Super Sport tires, with contact patches of 255 millimeters up front and 295 millimeters out back. These wrap around forged alloy wheels that save up to 8.8 pounds per corner versus cast wheels. The brakes use 15.5-inch front rotors with 4-piston fixed calipers and 14.5-inch rear rotors with 2-piston floating calipers.

For better aerodynamics, the B7 gets unique front and rear spoilers to reduce lift on the front and rear axles without adding downforce, which increases drag. BMW’s standard active grille shutters are programmed to work with the needs of the Alpina cooling system. Two unique colors are offered, Alpina Blue Metallic and Alpina Green Metallic. Buyers can also opt for the full palette of BMW colors.

Changes to the cockpit start with a new leather wrap for the steering wheel, featuring Lavalina leather that Alpina boasts is the finest available and is the same leather that Rolls-Royce uses. The digital instrument cluster is also unique to Alpina, featuring different graphics depending on the drive mode. In Comfort and Comfort Plus, it has blue gauge faces with red needles. In Sport or Sport Plus modes, the gauges have black faces, blue outlines, and green needles. Other interior changes include plush carpeted floormats with the Alpina insignia, an Alpina production plaque on the center console, door panel kickplates that say Alpina, and blue illumination for the door sills.

Alpina offers two unique trim treatments, Alpina Piano lacquer with the brand’s logo or Alpina Myrtle wood, plus all of the regular BMW options. The Myrtle wood and Tartufo Merino leather in the Alpina Blue test car I drove made for a simply stunning combination.

My drive started with a 90-mile loop of the Monterey Peninsula that included open two-lane highways and twisty canyon roads. It took only a few seconds behind the wheel to realize that this is an even better car to drive than the fantastic 750i. The suspension balances controlled responses with buttery smooth ride quality. Alpina puts more importance on ride comfort than you’d get in an M car, and that makes it a top-notch highway cruiser. In fact, the programming is so comfort-oriented that I stuck mostly with the Sport setting for an additional bit of body control.

And yet the B7 does well in the corners, as demonstrated by its performance on the famously twisty and bumpy Carmel Valley Road. The active rear steering steers with the front wheels in tight turns, making the B7 corner like a smaller car, and the forgiving suspension handles uneven surfaces like a champ. I had driven a Ferrari 488GTB, a Lamborghini Huracan LP610-4 Spyder, and a Jaguar F-Type SVR on the same road over the previous few days and found the B7 the most fun simply because it can handle the corners without punishment from the suspension.

On the open roads and in between the tight corners, I nearly unleashed all of the Alpina’s stable of 600 horses. Power is effortless and intoxicating. It comes on immediately—but not jarringly—and keeps building. BMW says 0 to 60 mph takes just 3.6 seconds, almost a second quicker than the last B7, and that feels right to my backside.

The power is even more explosive when you can unleash the full beast out on a racetrack, and that’s just what we did when we took it out for a few laps on Laguna Seca. With BMW M2 and M4 lead cars setting the pace, the B7 didn’t work hard to keep up. At 4,800 pounds, this car may weigh a half ton more than those cars, but 225 extra horses mean it will lap this circuit quicker than those rather accomplished track weapons. We only reached speeds of around 120 mph, but the B7 will top out at 193 mph.

While the power is a plus, the B7 is fighting against its weight and long wheelbase to carve corners when pushed as hard as possible. The Sport Plus mode lowers the car 0.8 inch to lower the center of gravity and the Michelins help it stick to the pavement, but all that inertia means you really have to get the car slowed down and under control to slice through a corner. Go in too hot, and it's going to push, no matter how much the active roll bars and rear steering help. All of the B7’s suspension hardware helps it handle better than it should, but there is only so much that can be done with 4,800 pounds and more than 16 feet of car to wrestle through a turn.

Alpina says the brakes offer great street performance on par with carbon ceramic brakes but with higher levels of comfort. The claim about carbon ceramic performance may be a bit of an exaggeration, but the B7's big binders handled Laguna Seca without overheating, pulsing, or fading, and that’s saying something.

The 2017 BMW Alpina B7 doesn't come cheap. It is priced at $137,995, almost $40,000 more than a 750i xDrive model. BMW says the premium for the B7 is about 20 percent over the cost of a comparable 7-Series. When you consider the additional standard equipment and the amazing job Alpina does turning a great car into an even better one, the sticker price starts to sound reasonable. BMW may never build an M7, but it doesn't need to. Alpina already has a comfortable and refined performance sedan. In this case, B is greater than M.