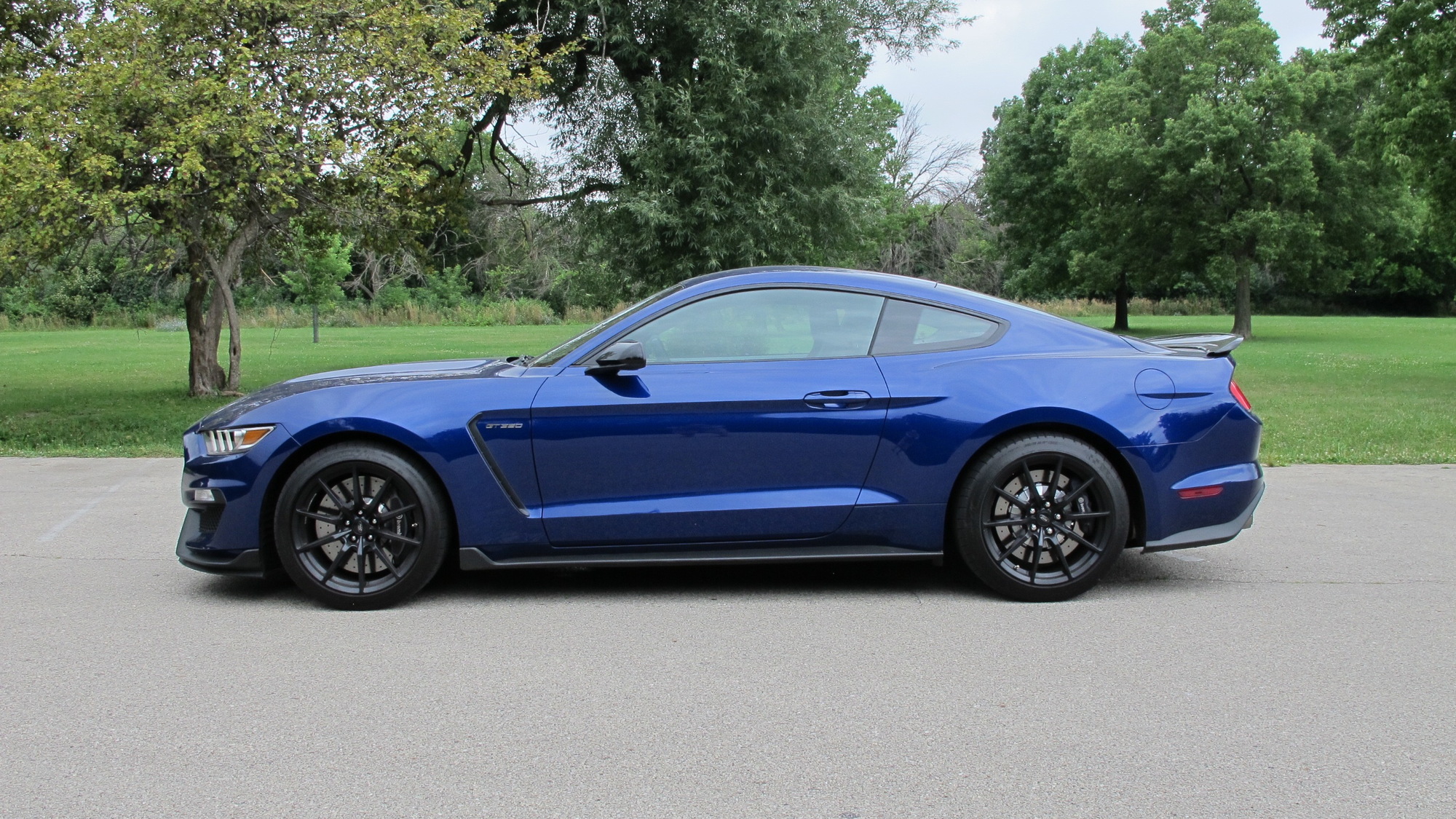 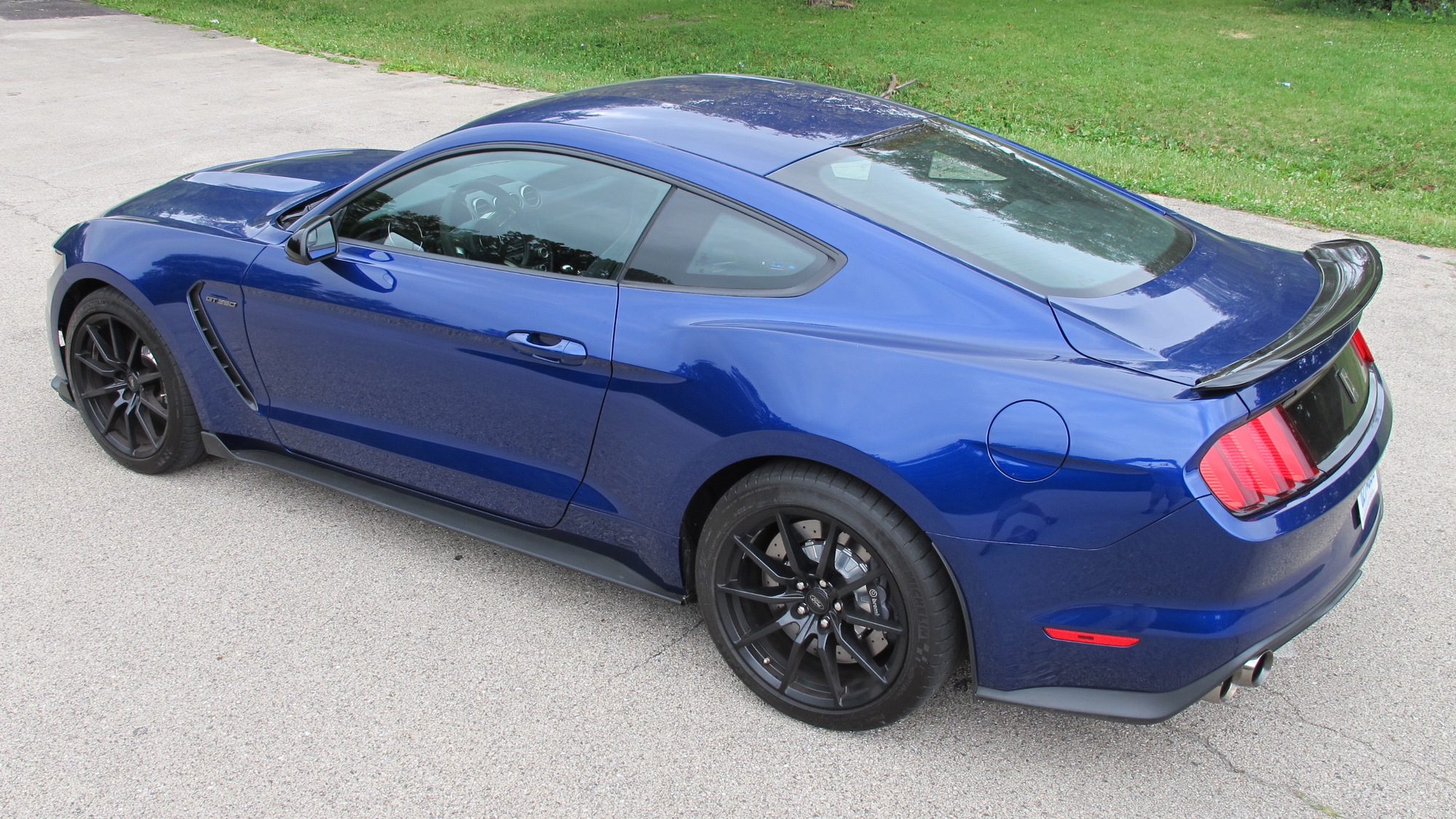 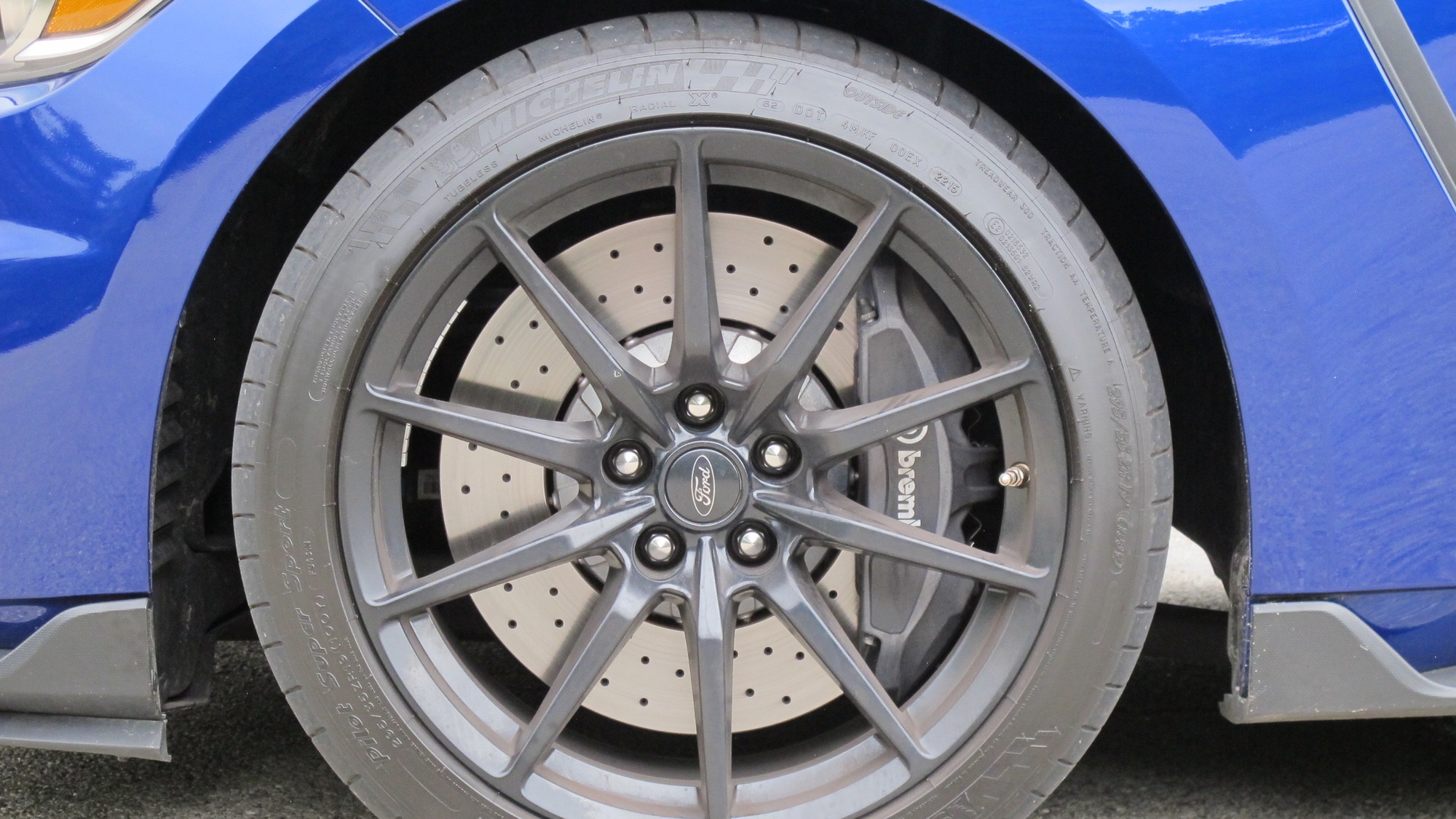 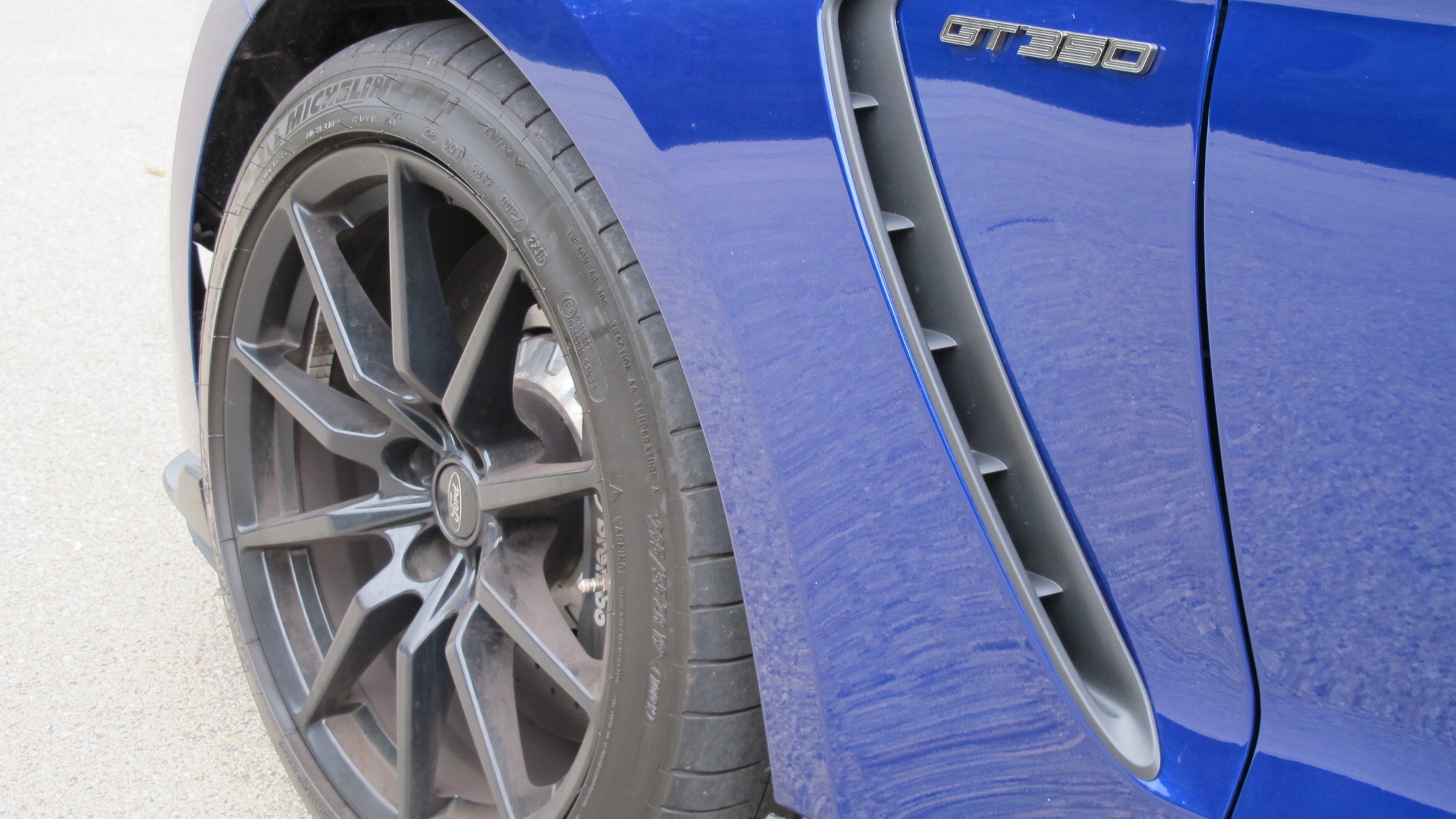 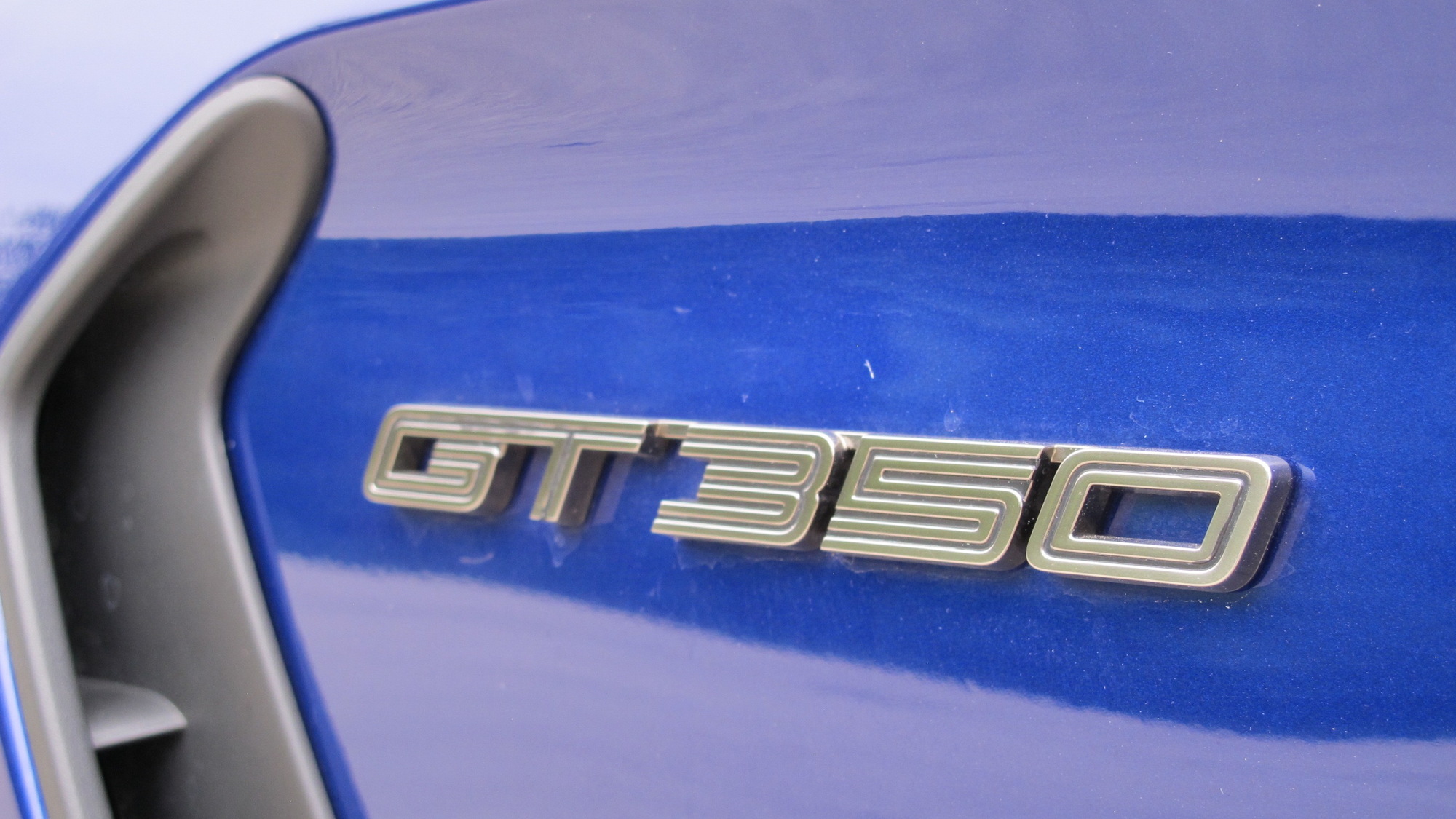 We've already driven the Ford Shelby Mustang GT350, and spent most of our time in its natural habitat: the road course at Mazda Raceway Laguna Seca (to be fair, any track will do). But this past week I've had the opportunity to drive the GT350 at home in Chicago, like I would any other commuter car.

My test car is chassis number G0017, so I assume it is the 17th car built. Painted Deep Impact Blue with black rims, it looks sinister but doesn't have any obvious GT350 graphics to let the uninitiated know just how serious this car really is. The car has only two options, a $475 "Over-The-Top" black and white racing stripe that must be invisible and the $6,500 Track Package that comes with all the goodies, most notably the MagneRide Damping System with adjustable magnetorheological shocks. This package also includes an Integrated Driver Control (IDC) System to choose various drive modes, a raised decklid spoiler, an aluminum tower-to-tower brace, an engine oil cooler, a transmission cooler, a differential cooler, and stiffer front springs. With the $47,795 base price, the $1,300 gas guzzler tax, and the $900 destination charge, that brings the total to $56,970--a bargain for this much track car.

I've spent the better part of a week in the GT350 and I have some thoughts to add to our initial review.

It's not meant to be tamed

Our previous drive of the GT350 and GT350R, editorial director Marty Padgett said it's the track experience that counts with these cars, as they are designed for that purpose. He is absolutely right.

It doesn't take long to understand that you are in for an uncomfortable commute in the GT350. The aggressive bolstering of the Recaros cuts into the space between the seatback and steering wheel, making entry difficult. Once inside, the seats are too tight for the full-figured gentleman, pinching my hips. Some larger folks may not even make contact with the seat bottom, sitting instead on top of the lower bolsters.

The experience doesn't get much better on city streets or freeways. Even with the MagneRide suspension, the car pounds over bumps. The rear end is particularly harsh. This may be the first generation of Mustang with an independent rear suspension, but Ford needs to take some lessons from the Chevrolet Camaro on how to dial it in. And the drive modes don't help either. The base comfort mode is all you want to use for anything but performance driving. Turning up the wick to Sport or Track modes just makes this car hop and jiggle and pound even worse.

On the highway, the GT350's massive 295/35 front and 305/35 rear 19-inch Michelin Pilot Super Sports follow seams in the road like a cat chasing the red dot from a laser pointer.

In one freeway construction zone, the car leapt a foot or two to the right along a road seam until I could wrangle it back on path. There is no relaxed cruising here. You have to be on your toes even when just toddling along.

The base version of Sync is also rather, well, base. The screen is tiny and you control it via a series of arrow buttons below the screen. It's hard to figure out, complicated to use, comes with a mediocre sound system, and it distracts you from the road, which isn't a good idea in this car. If I'm going to spend more than $50K, give me a nice big touchscreen.

Look out F-Type, you have some serious aural competition

That's the bad news. The rest is great. The joy begins when you fire up the 526-horsepower, flat-plane crank 5.2-liter V-8. It burbles and purrs to life, begging to be revved. It's a constant companion, but only emits a low rumble if you go easy on the throttle. But who wants to do that? Tromp on the gas and the 5.2 roars and whumms and blatts like no other car on the street. I think it sounds like a cross between a Ferrari and Joey Lagano's NASCAR Ford Fusion. How cool is that?

I was impressed that the GT350 sounds as good as any car on the market, then I discovered the Sport Exhaust mode that drops the engine note a few octaves and raises the volume a few clicks. Whoa, Nellie! This thing sounds as good as the Jaguar F-Type's V-8 or an Aston Martin. Who needs a good audio system when you have this soundtrack?

While I didn't get to flog the GT350 on a racetrack or on some twisty country roads, I would be willing to live with its flaws to enjoy its strengths from time to time. Even if you can't find a good road, the V-8's engine note is a source of amusement every time you drive this car.

The GT350 is a brilliant piece of engineering that blows past pony into the realm of track weapon. I'm glad that there are still lunatics at Ford who have the will and know-how to turn a Mustang into a flat-out track car with an exotic engine and the moves of a dancer. I'm also glad there are suits at the Blue Oval who are willing to empower those guys. This thing is a rough-riding, barbaric yawping, track slaying, corner carving, uncomfortable joy machine.