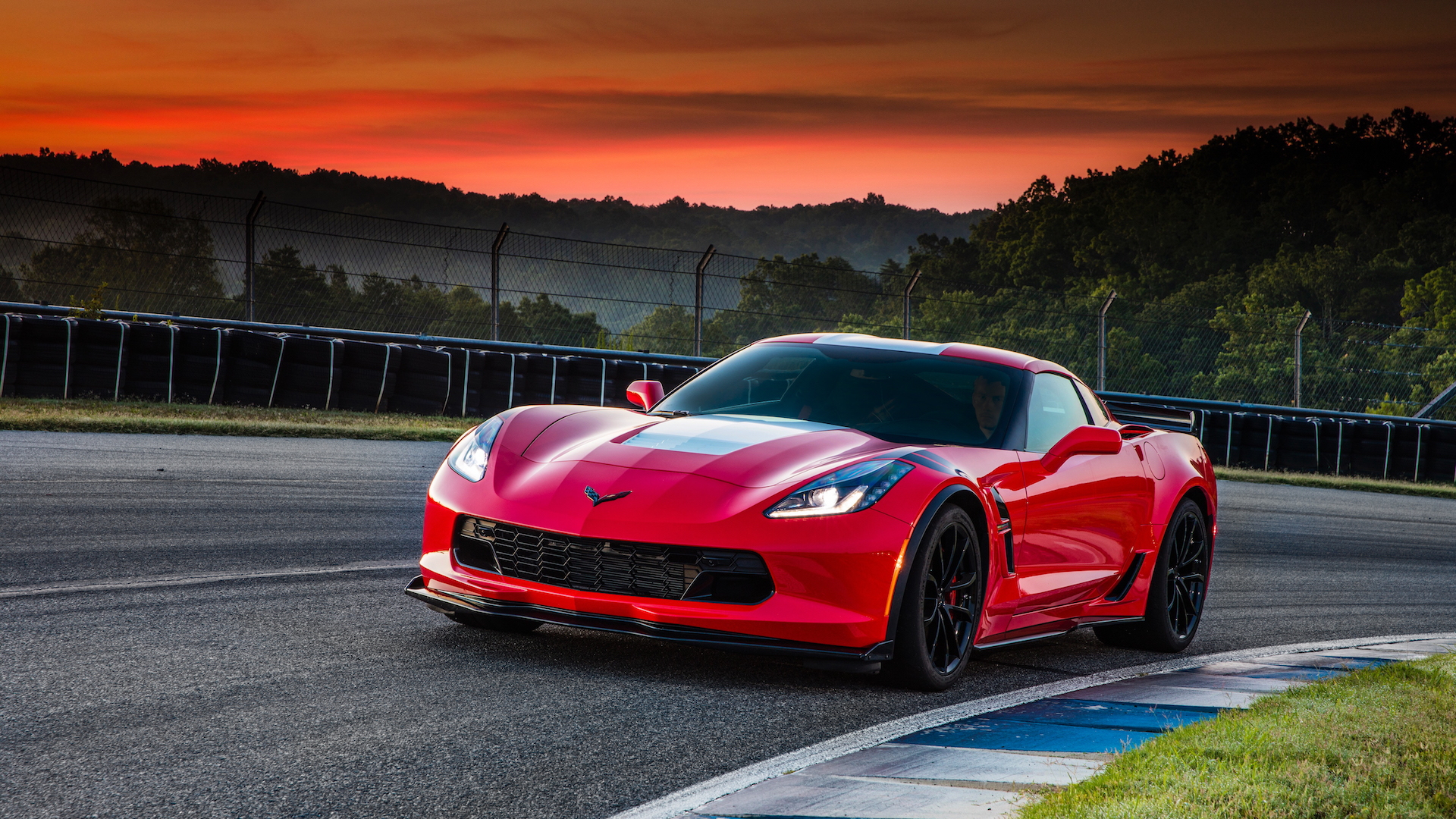 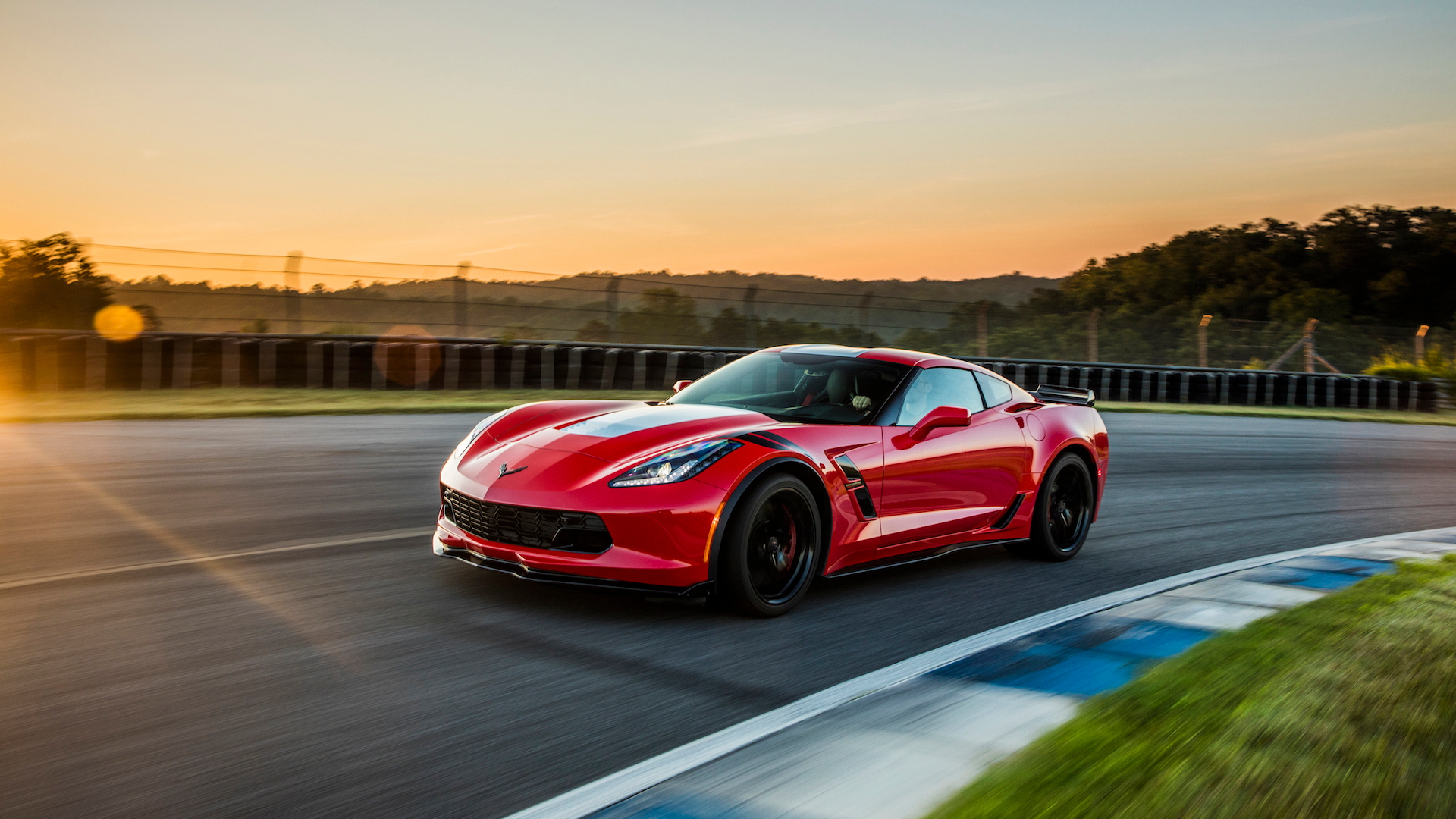 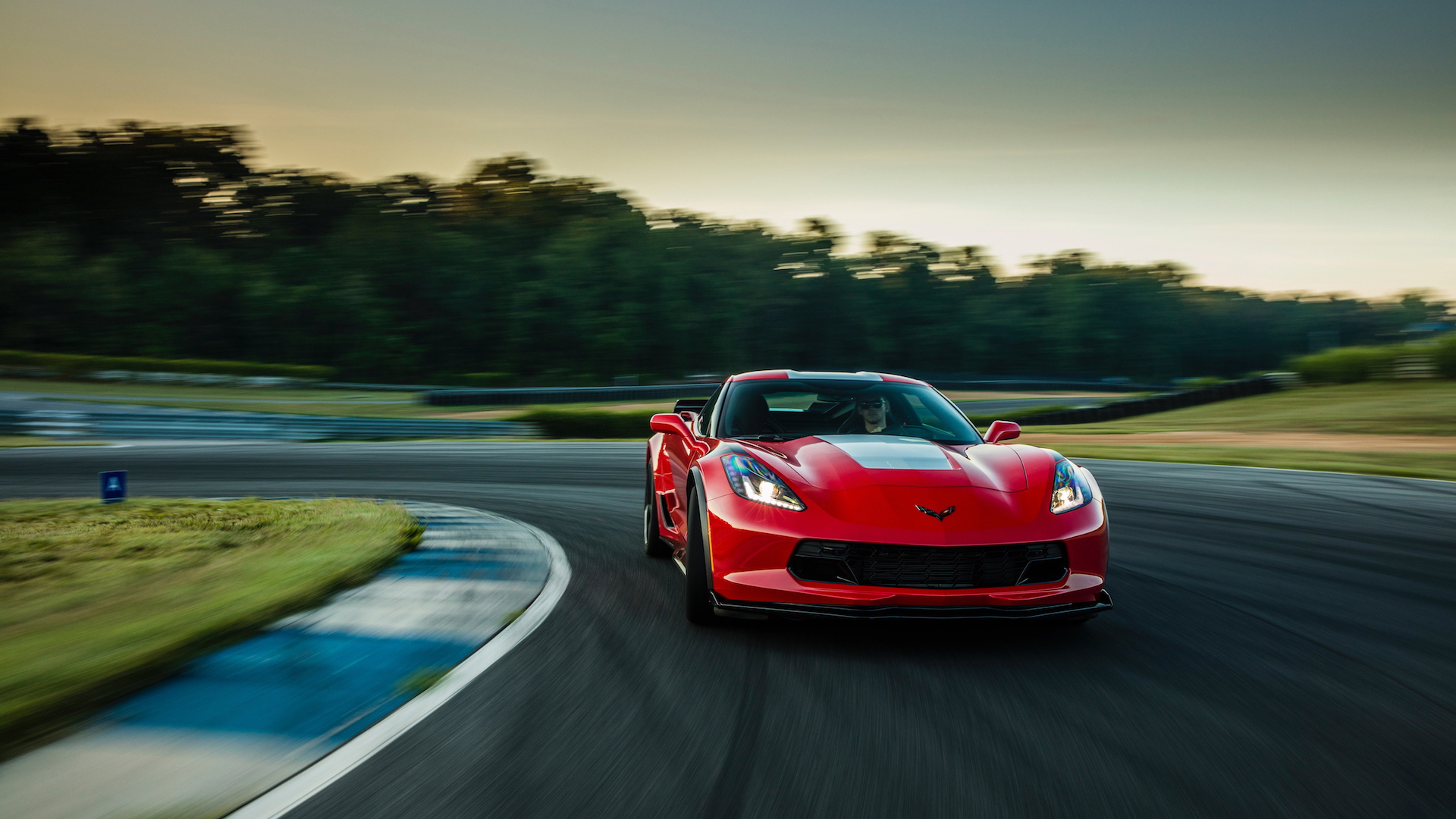 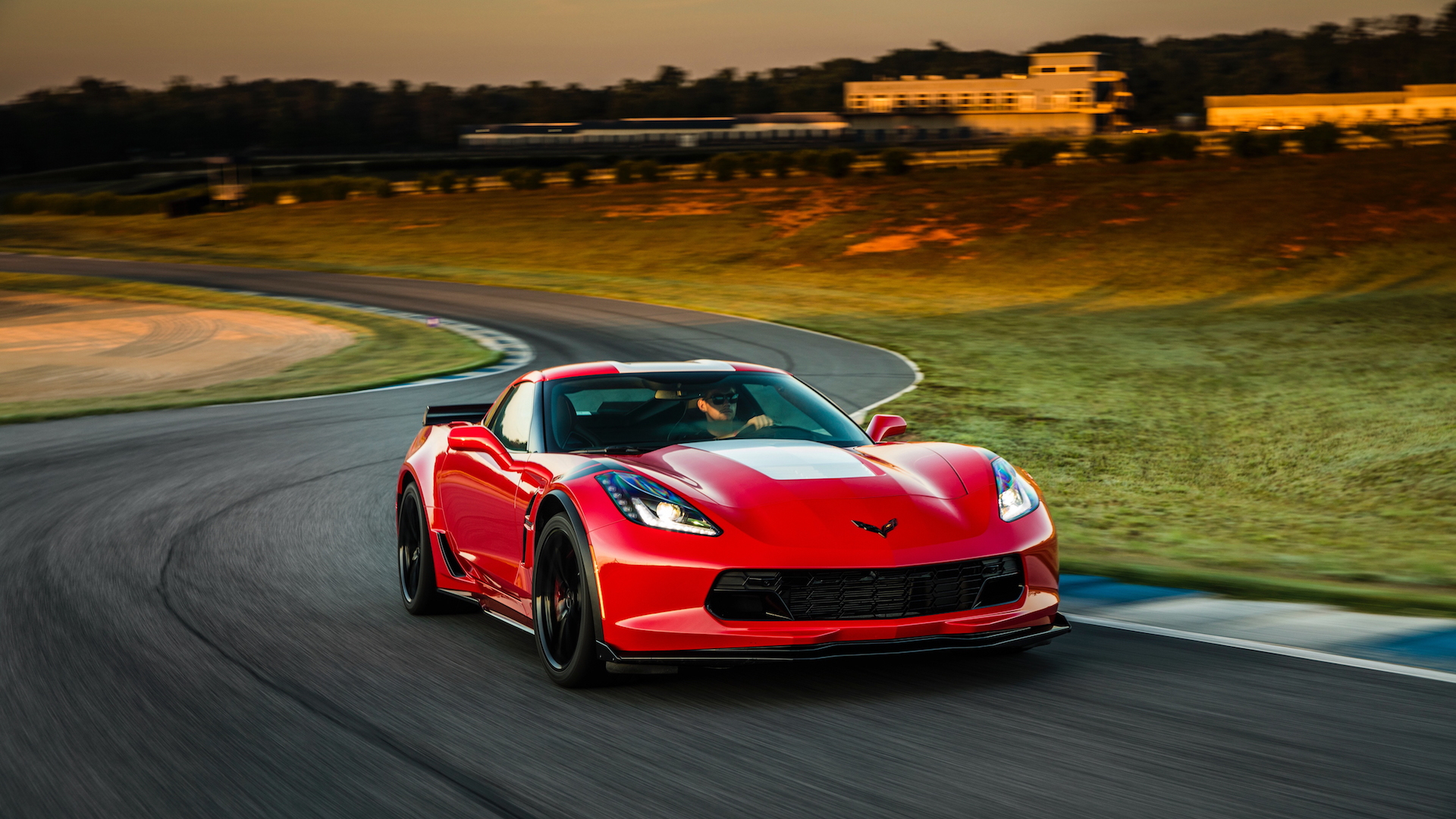 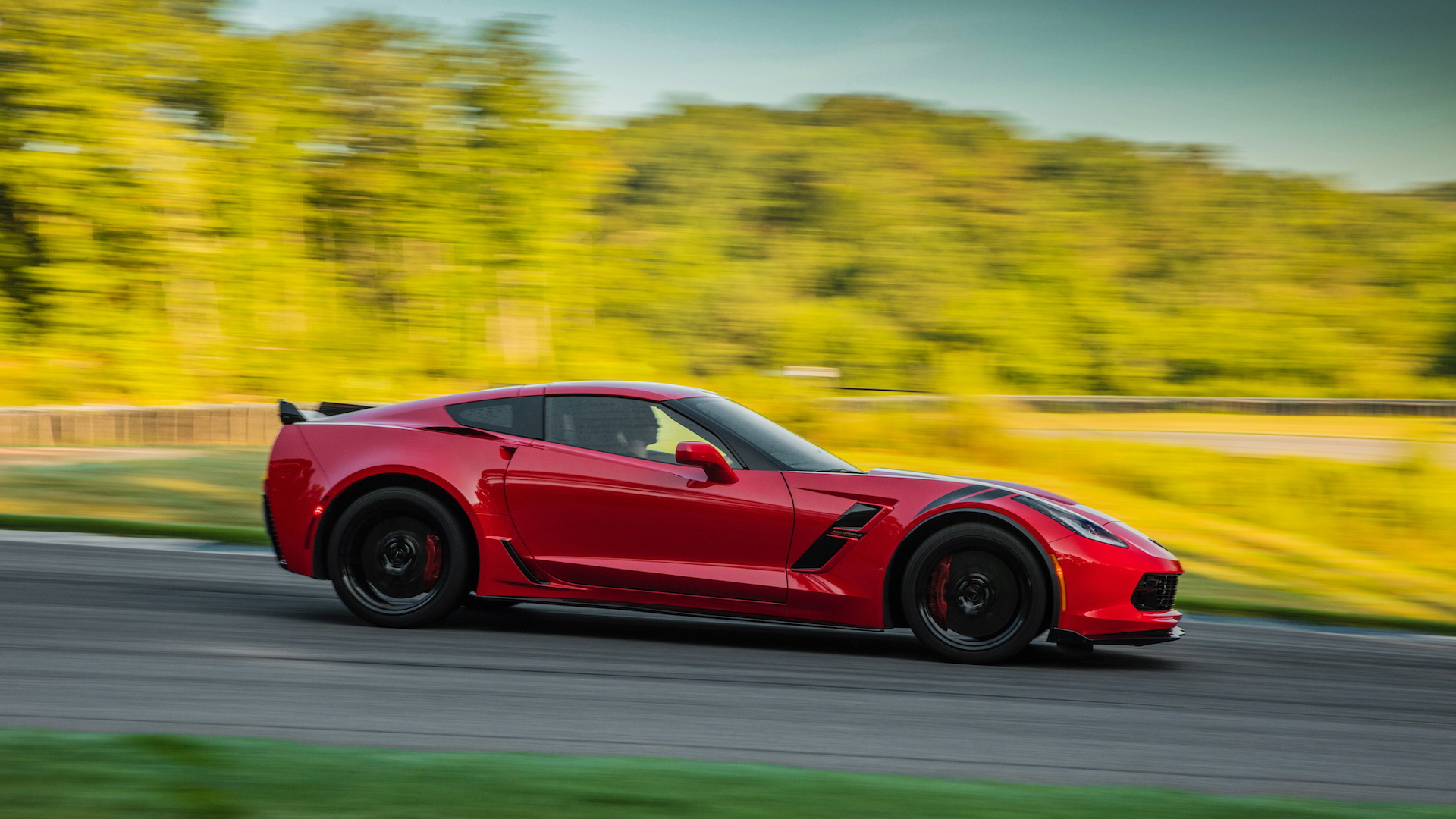 The Corvette is the king of American sports cars, but which one reigns supreme? If smashmouth acceleration and take-no-prisoners grip are your thing, the only Corvette on the menu is the Z06. Check, please.

If you favor a subtler approach--maybe just a roundhouse to the jaw, with a donkey-kick chaser--there's this: the 2017 Chevy Corvette Grand Sport, a new middle entry in the Corvette family, a car blessed with the Z06's handling bits and paired with the Stingray's naturally aspirated V-8.

Call it a parts-bin special if you want, but that's like equating the French Laundry's mother sauces with the stuff at the Olive Garden. Yes, the Grand Sport picks off the plates of other 'Vettes liberally, but its brute-force V-8 and handling hardware still are car caviar.

The Grand Sport takes what Chevy calls a "purist" approach, a third way between grand-touring Corvette Stingrays and supercar-taunting Z06s. It's a track-day special, for days when handling is a slightly higher priority than scorching the straights.

A blazing 95-degree day's drive at Atlanta Motorsports Park confirmed all that. A 1.8-mile loop body-modified on the north Georgia mountains, AMP is a tight greatest-hits mashup of Spa and the 'Ring.

A dozen laps at AMP gave plenty of proof that, if it really does exist, a purported mid-engine Corvette just might be an expensive folly.

It's only the third in the entire Corvette lifespan, but we'll lay down money that this Grand Sport will one day be the most popular.

A short run through the record books: Grand Sport 1.0 was Zora Arkus-Duntov's idea. He wanted to race the Corvette at Le Mans, but only five cars escaped into the wild before the project was shut down.

The next Grand Sport was the 1996 car, a single model year send-off for the C4 that numbered just 1,000 units.

The latest Grand Sport came in 2010, with the Z06's wide track and other shared hardware. It was the top-selling Corvette for a few years, with the asterisk of arriving right after the Great Recession and GM's bankruptcy.

The 2017 Grand Sport returns as part of a trio. Now there are essentially three Corvettes, each with a performance upgrade package. The base Stingray is the grand-touring model, and an astonishing sports-car bargain. It's also a little crowded by GM's own excellent Camaro SS. Adding Z51 hardware takes care of that overlap.

The groundshaking Z06 and its performance package? They're knocking at the doors of the supercar world, and we hardly need to tell you why.

The Grand Sport is sweet spot where the Corvette flashes its racing core without shedding its roadgoing fluency.

Think of it as a Z06 without the supercharged engine. The Stingray's 6.2-liter LT1 V-8 slips under the impossibly low hood, the Z51's dry-sump system keeping it wet and happy on the track while it rips off 460 horsepower and 465 pound-feet of torque.

Versus the Stingray, the Grand Sport gets an aero package of front splitters and a wickerbill spoiler, better cooling, an electronic limited-slip differential, and Michelin Pilot Super Sport tires 285/30ZR-19s in front and 335/25ZR-20s in back, hiding steel brakes with 14.6-inch rotors up front, 14-inchers in back.

In this trim the Grand Sport only adds 25 pounds to the Z51's curb weight, but yields 1.05g of cornering grip, depending on where the Performance Traction Management system is set among its five modes.

Stop here, and you'll never regret spending more over the tamer Stingray. The Grand Sport can comfortably fling its way around steamy Georgia two-laners without ripping itself to pieces over train tracks. It grips carefully but doesn't strangle corners, doesn't hammer its passengers. It's a sports car that can mimic a grand tourer without mocking those flabbier cousins.

FLASHBACK: That time when the Corvette Museum almost fell completely into a sinkhole

You'll never uncover what it's capable of, though, unless you tick the next package and seek out the nearest track.

That package you'll want is the Z06's Z07 setup. It runs about $8,000, but gets supercar hand-me-downs of the highest order: Michelin Pilot Super Sport Cup 2 tires, carbon-ceramic brakes, Magnetic Selective Ride Control dampers, and a more aggressive aero package. A hundred pounds lighter than the Z06, this Grand Sport can turn in an identical 1.2g in ultimate grip.

A 7-speed manual is standard, but with the optional 8-speed automatic transmission, the Grand Sport Z07 can hit 60 mph in 3.6 seconds, and take the quarter-mile in 11.8 seconds.

Yes, that makes it a half-second slower to 60 mph, and almost a second slower in quarter-mile, compared to a Z06. Those numbers are fairly academic at a course like AMP, where grip comes in just as handy than grunt.

Like a lot of modern-day Georgia, AMP is what the Dukes of Hazzard would build if they hit the lottery. In just under two miles of track, it packs in many more teachable moments than some other privateer havens.

It's also the perfect place to bleach out like a craisin in full helmet and HANS hardware, if you're up for that sort of thing. Suit up and wait. No one wants to come in early off their string of hot laps here. No one is asking, "please, no more triple-digit passes by the pits."

No one wants less Grand Sport.

For the TL; DR crowd, the Grand Sport fillets AMP like a boning knife. Forget launch control: the trick here is to toggle the Grand Sport into Track mode, let traction and stability control take a smoke break, and toy with rev-matching, see if you can beat its drill-sergeant powerband precision.

Bank out of the pits, and the Grand Sport pinballs into an uphill zig-zag before the first real test of your patience arrives. It's a medium-sized carousel that turns the Cup tires into paintbrushes--a little throttle here, a dab of brake there.

It's also just the first point where you have to brace yourself for Track mode's hefty, hefty steering weight. The current 'Vette has very responsive electric steering, pretty glorious in its connectivity. The Track setting seems to want to bold, underscore, and highlight: this still is a muscle car, even if it's dancing through this road course like Nureyev would through an episode of Hee Haw.

You might wish the Grand Sport would reassert the manual transmission's authority, but no. The 7-speed manual's slower around the track than the 8-speed automatic. It's still a linkage to the past that's worth preserving: you get the feeling you're cross-stitching the course, not barely grabbing it with four minuscule pads of rubber. Rev-matching helps you fumble through the first short-shift stretches, but just until you re-discover the Corvette's pedal placement is about ideal for heel-and-toe.

Ricochet from one deeply pocketed turn to the next wakes up the LT1. Do it all in third if you want: This Corvette is tractable and so predictable, even AMP's bedeviled back stretch doesn't upset it. Huge ups here have to go to the Pilot Sport Cup 2 tires. They've made Ford's GT350R into a historic gem. In the Grand Sport, they give it the hero moves otherwise walled off in the Z06.

Those back bits of AMP are supposed to ape the 'Ring. A steep descent whips itself into an equally steep uphill right-hand bend, then blends into a big multi-apex carousel, all crafted to show off glaring handling deficiencies make racing interesting.

The Grand Sport shrugs it off. It does a deep-knee-bend or two, and waits until you're confident enough to reach beyond third.

A spotter's guide, and some gentle advice

It takes some concentration to tell the Grand Sport apart from the Z06. The uber-Vette has its own high-clearance hood, but the Grand Sport gets a grille like that on the Z06 and the wide fender kit. Grand Sport taillamps are red, black or gray brake calipers are standard, and its wickerbill spoiler has no clear bridge or tall extensions because engineers found they made the car slower. (They're offered as accessories.)

Remind us again of the point of a mid-engine Corvette?