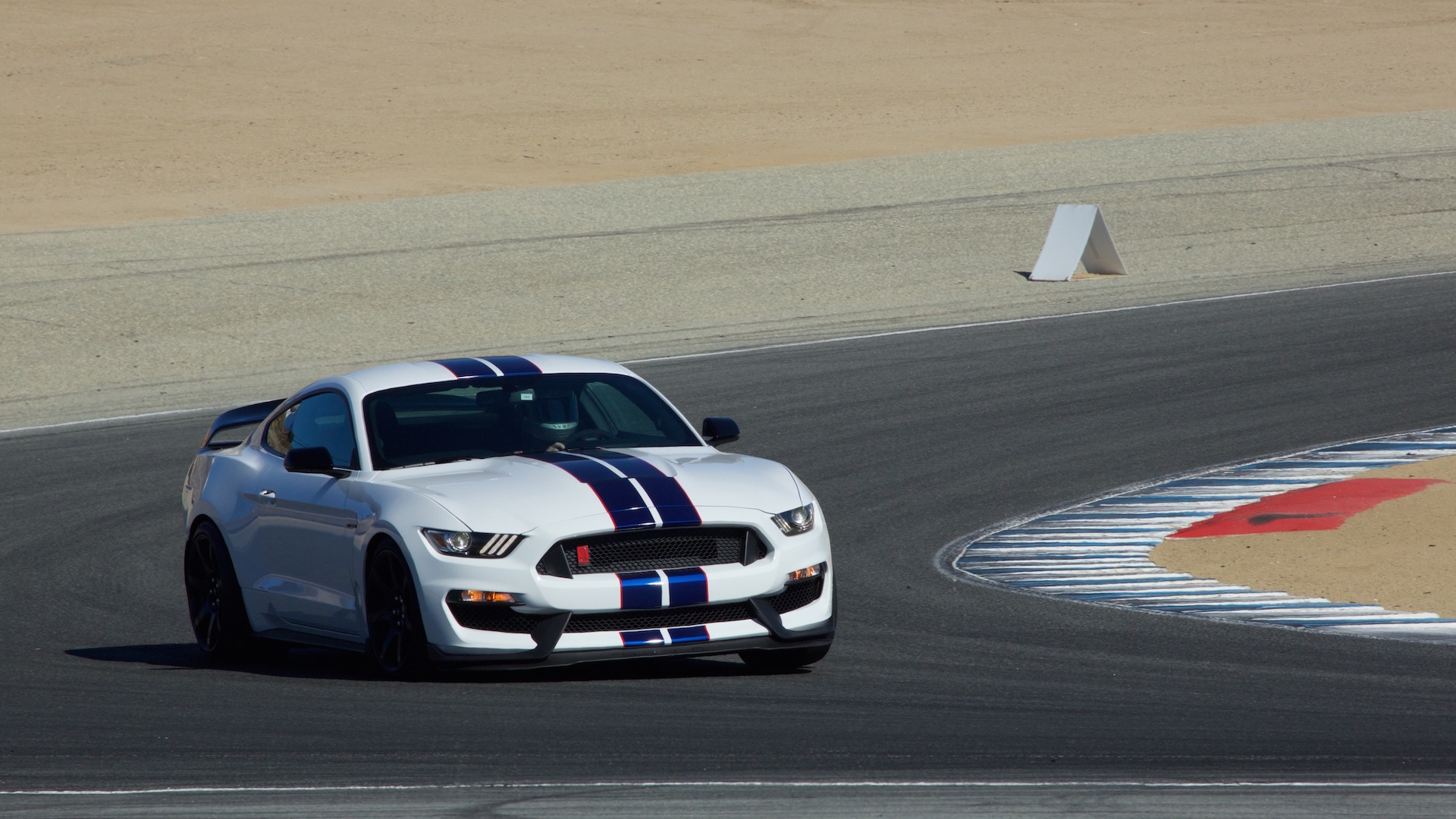 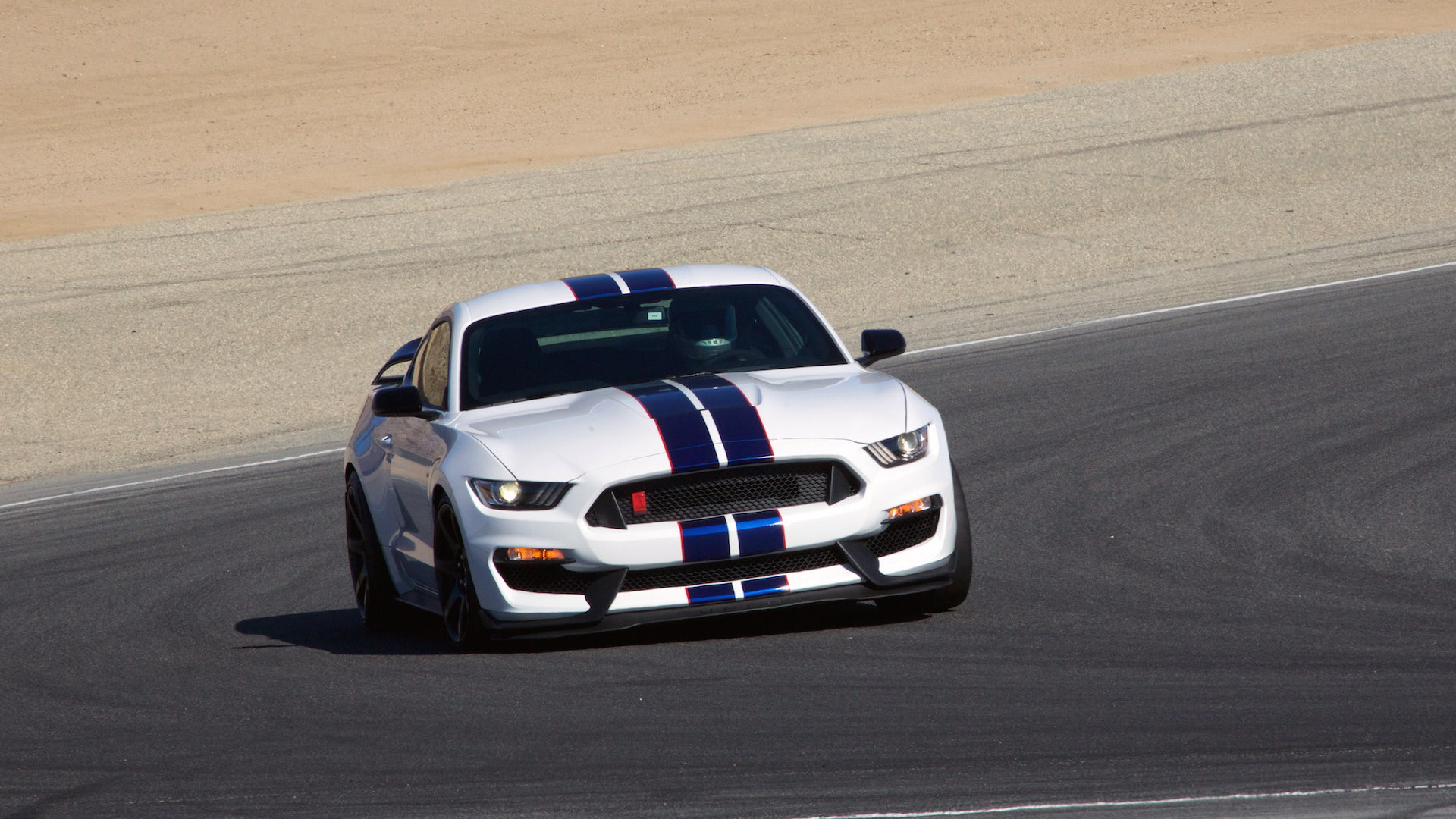 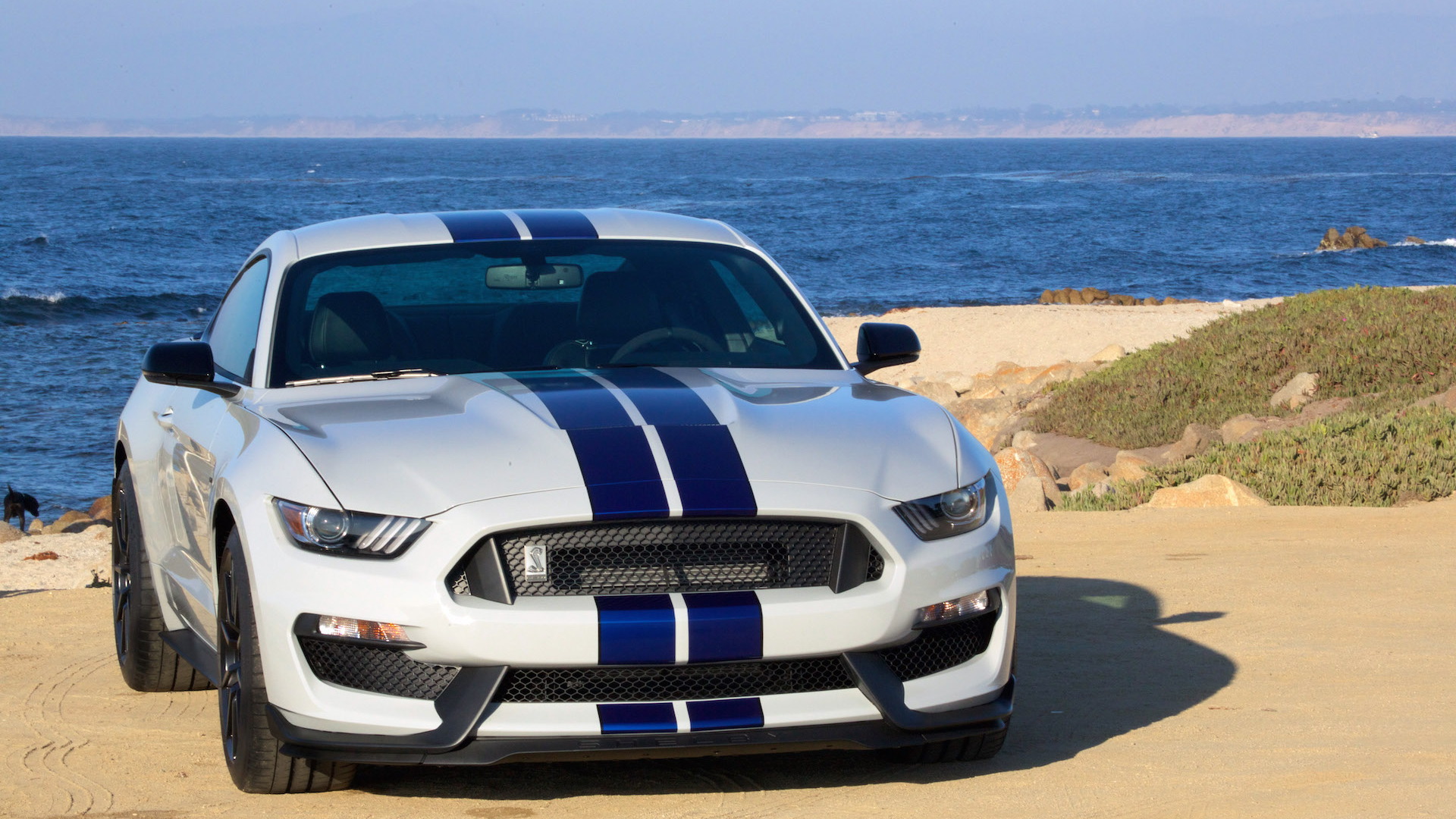 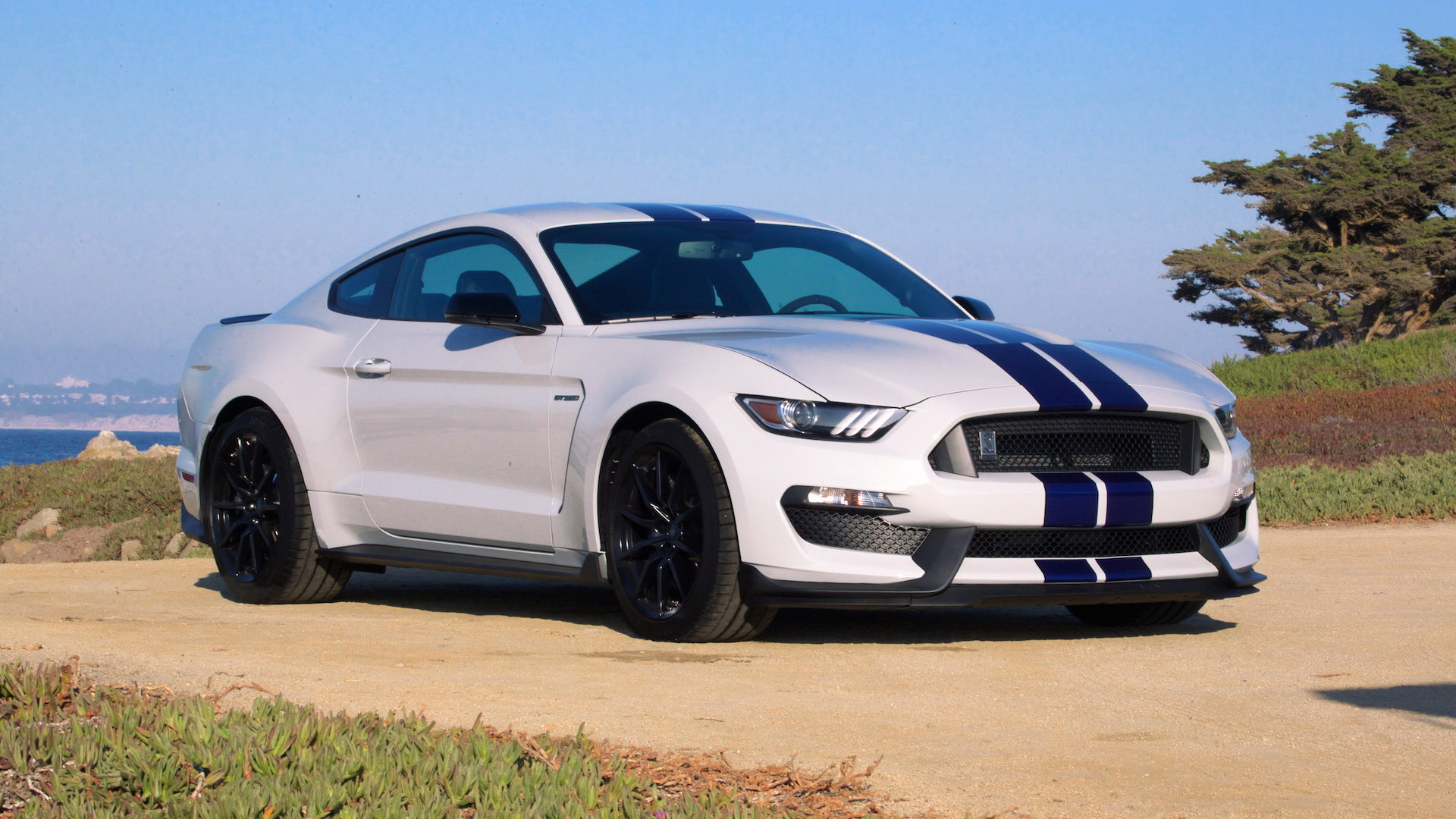 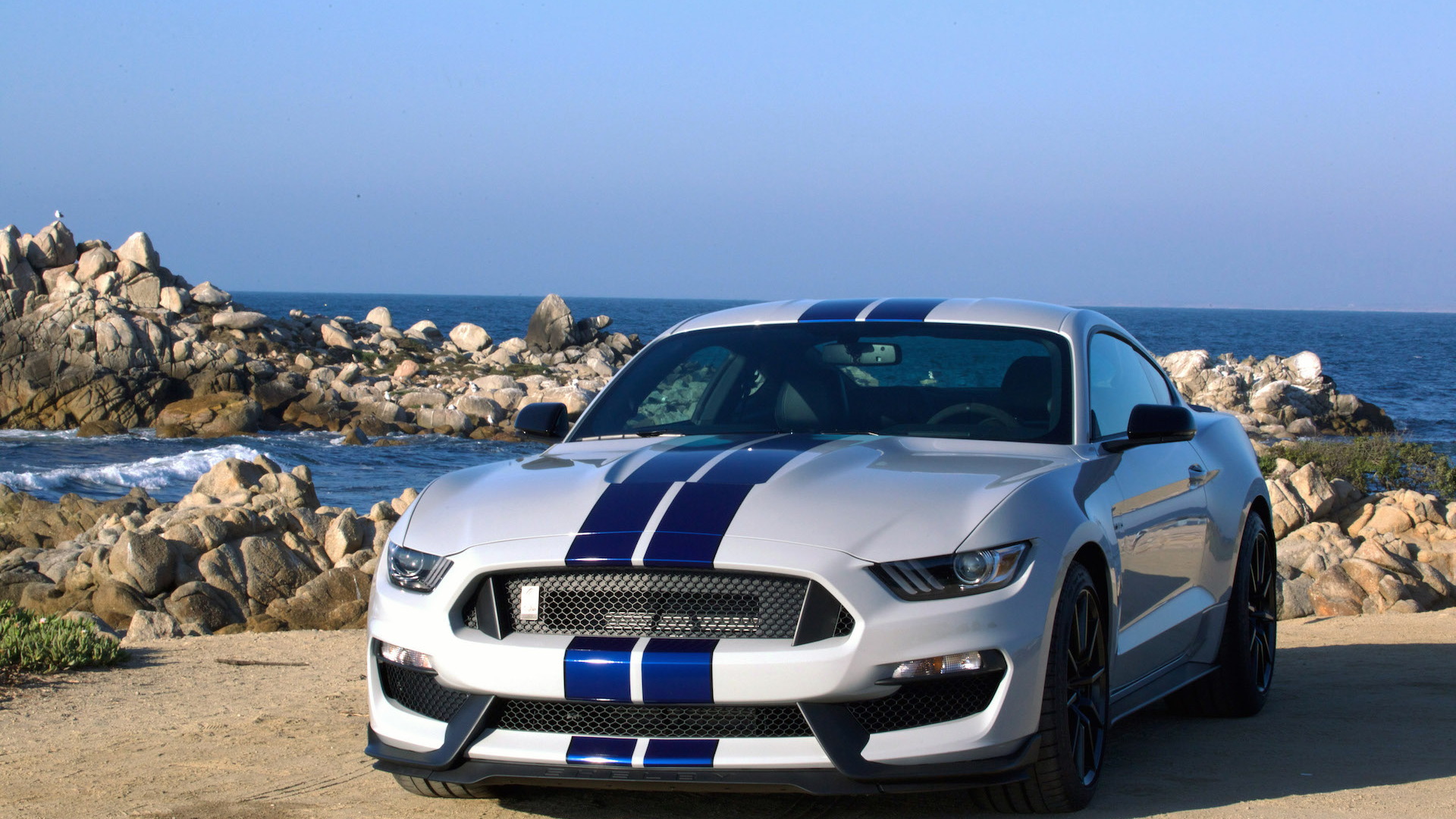 Blame it all on notorious badass Carroll Shelby. The man was a goddamn prophet. Back in 1965 he knew what was wrong with the Mustang—it needed more power.

It doesn't take a genius to think that, but it took one to make it happen, and to make history. Shelby gave the pony car more power in the form of the GT350—and the muscle car world changed forever.

The GT350 polishes the Mustang to a high muscle car gloss. Most of the work's already done, in fact. Forget the days of the live axle—the latest Mustang has an independent rear suspension, electric power steering, a really stiff and stout body, everything it should have had for the past decade.

It’s so much better than any Mustang from the past, but truth is, it had room to get better. Even as a GT, the Mustang has a lot of compliance baked into its suspension, so handling is a little loose. And frankly, the big 5.0-liter V-8 doesn’t sing out as much as it should.

That’s where the Shelby edition comes in. It’s a tight handler. It’s loud. And it’s ferociously stuck to the ground, especially in R trim.

The beating heart of the GT 350 is a new version of Ford's latest V-8 family—here, a 5.2-liter V-8 with a faintly exotic flat-crank design that connects pistons to the crank at 180-degree intervals rather than 90-degree intervals, for better high-end breathing and less inertia. It's the next step on the free-revving spectrum that started with the previous-gen Boss 302, which stripped out weight as much as possible and set the previous Mustang high-water mark for responsiveness.

There's weight trimming here too, with aluminum bores and weight scraped out of the crank itself by drilling straight through its center, its entire length, but the effect of going flat-crank has a bigger effect on the psyche. It just rips to life, shredding eardrums and shitty internal GoPro mics from barely off idle. Then it switches mid-song to a note you usually hear sitting at the end of an active runway—a beautiful shriek even without the exhaust system flipped into its heavy-breathing mode. It’s free-revving through the huge power band—a real jolt back to back with the stock 5.0, making that motor sound like nursing-home Muzak.

Okay, so flat-crank designs aren’t as smooth as street-ready V-8s. Who cares? This engine makes noises that should be illegal—and probably are, somewhere in the world.

If you #GiveAShift, the Shelby's the Mustang for you—because it only comes with a Tremec manual transmission. Engineers studied a seven-speed unit as well as rev-matching, but figured the repackaging would add too much weight. They throw some shade in deeming the rev-matching inappropriate for a track vehicle. The 'box does have triple-cone synchros and a firm, positive shift feel, better than the stock GT's Getrag unit.

There’s a standard Torsen differential to get all that power to the ground, and it’s also the first Mustang to get magnetic dampers filled with fluid that firms up quickly—so it’s not a total beast on the road. The dampers let the Mustang stay as close to track-ready as possible, without delivering a punishing ride on the streets between track days. The GT30's ride height is lower than a stock GT, while spring rates and bushings are stiffer.

The GT350 also gets five programmable driving modes (normal, sport, weather, track, and drag) programmed in concert with throttle, steering, and damping for the most effective combination of inputs—slower throttle for weather, lighter steering for everyday driving, and modulation of dampers for drag mode, to maximize launch control and grip.

The body's been stiffened with an available tower brace to reduce quiver, and there's a host of aero add-ons and tweaks, from a reshaped hood and front end, a deeper front splitter and hood vent, and brake cooling ducts.

Brakes are Brembo six-piston calipers in front, four-piston in back—and aren't some exotic formulation. The GT350 stays with iron brakes rather than carbon-ceramics; engineers say the carbon brakes would transmit more heat to the brake pads, which would mean larger sizes needed, which would offset the weight savings, never mind the more expensive replacements down the road. Custom-design Michelin Pilot Super Sport Tires wrap around 19-inch alloy wheels, 10.5 inches wide up front and 11 inches wide in back.

All told with the weight offsets and new gear, the GT350 stays within the acceptable weight range, at just under 3,800 pounds in track-ready form.

Step up to the GT350R and a host of changes apply to an already vastly improved Mustang.

First, Ford dumps the air conditioning, stereo, rear seats, rearview camera, tire-inflator kit, exhaust resonators, and some carpeting and soundproofing. Then they swap the alloy wheels for 19-inch carbon-fiber wheels weighing about 18 pounds each. They're lighter, thus easier to launch, and exact less of a penalty in cornering. In all, the GT350R is down more than a hundred pounds from GT350 with the track package, by Ford's calculator.

The wheels wear Michelin Pilot Sport Cup 2 treads, 305/30s in front and 315/30s on the rear, which engineers say outperform some racing slicks.

And as for aero, the GT350R gets a more massive carbon-fiber rear wing that pushes the rear end down on the track more emphatically than the smaller lip spoiler on the GT350.

But enough with the tech spiel and the chalk talk—you want to know what it's like to drive, correct? It’s time to launch.

Mustangs haven’t always been the leaders of the pack on the road course. If you’ve ever watched a classic GT350 waddle the the corners at Laguna Seca, you know what I mean. But there’s been steady progress, even during the live-axle era. Four years ago I drove a Boss 302 on this track and thought, man, the Mustang really can’t get much better.

Well of course it can. This GT350R? It has incredible composure and tremendous grip. Give credit to even more exotic Michelin Pilot Sport Cup 2 tires, carbon fiber wheels and that big carbon-fiber wing. It just sticks, and sticks, and sticks. Press it deep into the pockets of Laguna Seca and it sits perfectly, obediently, then explodes behind a flat-crank wail on exit.

Ford's expert drivers tell us we really could do the whole track in third, the way it's coned off to save us from "exiting" the corkscrew early. I give that one lap's try and then poke and prod around the flat-crank with the Tremec six-speed. It's rewarding to row it—just as rewarding as it is to probe through the GT350R's fine-tune throttle and sharp steering, like you've never been able to do in a live-axle Mustang.

Within a few hundred feet you forget the flat crank noise. It's the grip that grips you. It's stuck to the ground like no Mustang before, tires gently telegraphing when you've both had enough—and it takes a lot and a long while to get there.

The rear end stays planted even through Laguna's infamous drop-off zones. There's zero hopping around as it crests blind hills and dives into steep elevation changes. The Boss 302, for all its charms, could get dancey, like it was taking virgin steps on a bed of hot coals. With the live axle gone, the huge wing hung off the back, and bespoke super car tires, the Shelby does its job purely, without interference, and it's just doing it at significantly higher speeds and lateral loads than it's ever done in the past.

Exiting the last slow turn on to the front straight, and I kept trying to mimic those classic GT350s doing the same thing two weeks ago, all lurid slides through a 90-degree left-hander, needing serious correction every time.

It's impossible. The new Shelby takes that bend drama-free. Drop into second if you want, dial in a little left steer and brush it around the corner with a touch on the throttle like you're applying the final coat of varnish to a masterwork. The treads on the GT350R give it almost zero wandering on center on this smooth, perfectly maintained track. If you've ever been disappointed by electric-steering cars, well, maybe it's mostly tires: the GT350R has exceptional directness and intuitive feel.

Corner turned, the exhaust explodes again, shivering that shiver through the foot board. It's humming now, barreling for the camber change at the top of the hill that flattens out the car so you can do it all over again.

The GT350 isn't quite as nuanced or as subtle as this, and the tires and wing are everything. It's like going from a scalpel to a surgical laser. There's a whiff of understeer in a couple of the more aggressive kinks at Laguna in the non-R, which don't do any favors for the flat-crank's less thunderous power in very low-speed corner work, below about 3,000 rpm.

After our requisite dozen laps, the only falldown was the Recaro chairs. There's a dearth of lumbar support, which meant laying the seatback at an angle that left me stretching. In daily driving they'd be a mess—not that you'd want to necessarily drive the Shelby every day. The magnetic dampers make it just tolerable on anything but smooth roads, even in the most comfortable setting dialed in through the steering-wheel controls.

It's the track experience that counts here, and everything's aimed at making it brilliant in ways the Mustang GT approaches but can't deliver with its mainstream body work, its mass-market tires.

As much as we like driving the Mustang GT, the GT350 corrects all its niggling flaws. It’s boisterous, tackles corners flat like a linebacker, and gives up grip in the smoothest, plainest way possible.

It leaves us craving more track time—but also, some of the structural and braking upgrades on a stock Mustang GT, and also the magnetic dampers to clamp down on some of its bounding ride.

As it stands, the upgrade from GT rolling stock to GT350 isn’t cheap. The Shelby GT350 starts at $49,995 before options. The race-prepped GT350R is almost $64,000, including the carbon-fiber wheels and exotic-car rubber. We’re talking ZL1 Camaro and Hellcat Challenger territory. How convenient.

The GT350 loads up on the hardware versus a stock GT, too. It’s got a flat-bottom steering wheel, a more aerodynamic hood, air splitters and brake ducts, and its own Recaro-designed seats. A couple of options lift prices accordingly: With the Track package, Ford tosses in oil and transmission coolers. A Tech package adds on power leather seats, Shaker audio, a touchscreen infotainment setup, and automatic climate control.

The GT350R gets a bigger wing, those Sport Cup 2 tires and carbon fiber wheels, and its own suspension setup. Ford blots out the chrome to reduce glare, but touched the calipers with red paint, rims the optional striping in red piping, and turns the Shelby cobra badge to red enamel. If you want, you can add back in the air conditioning, the touchscreen interface, seven speakers, and turn-signal mirrors.

That’s pretty fancy stuff for a track-ready car that wears the Shelby name. But all those goodies don’t get in the way of what’s now, officially, the best Mustang of all time. The GT350s—the GT350R especially—are pure Americana, straight up, no chaser.

Shelby would be proud, don’t you think?