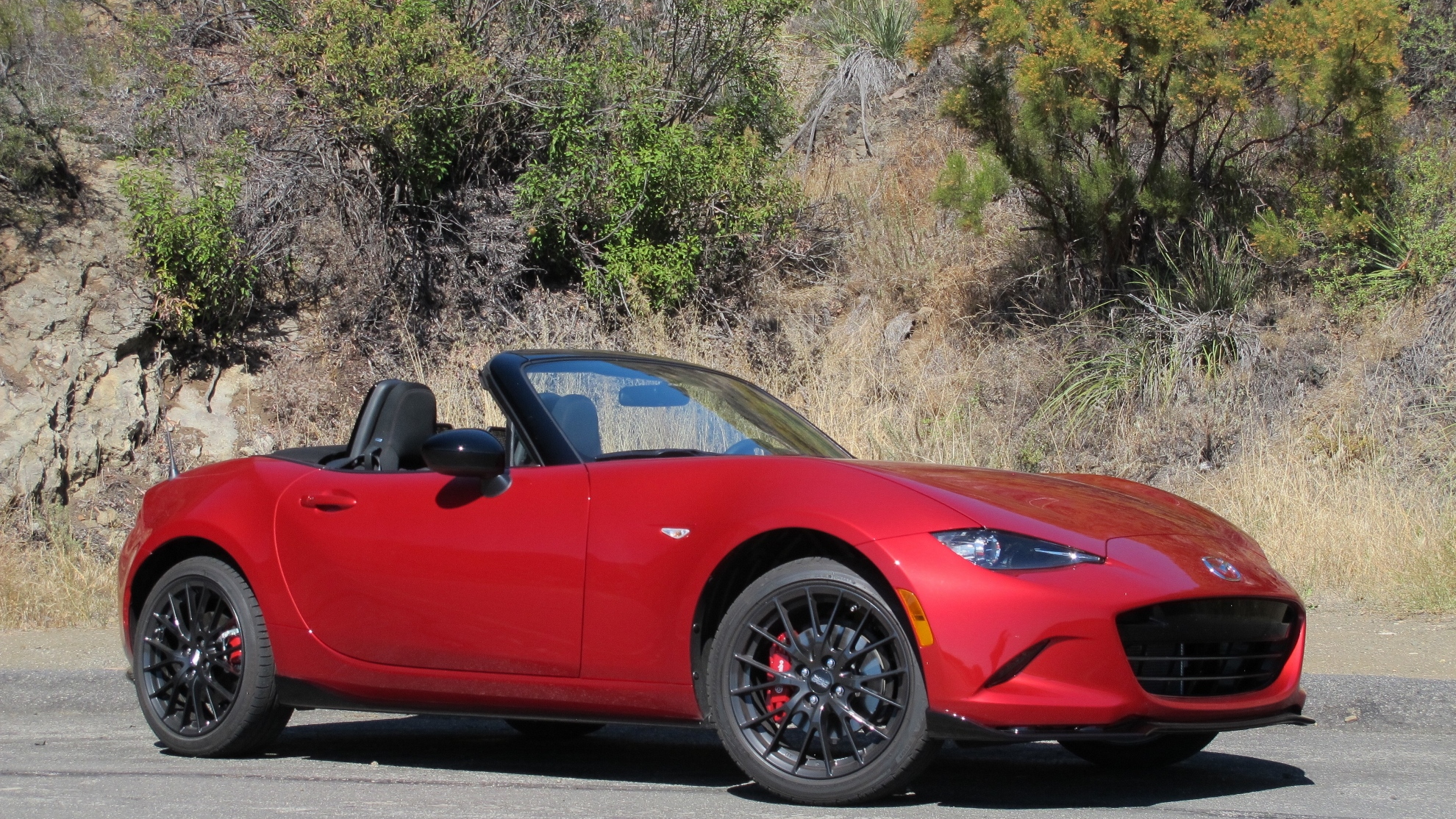 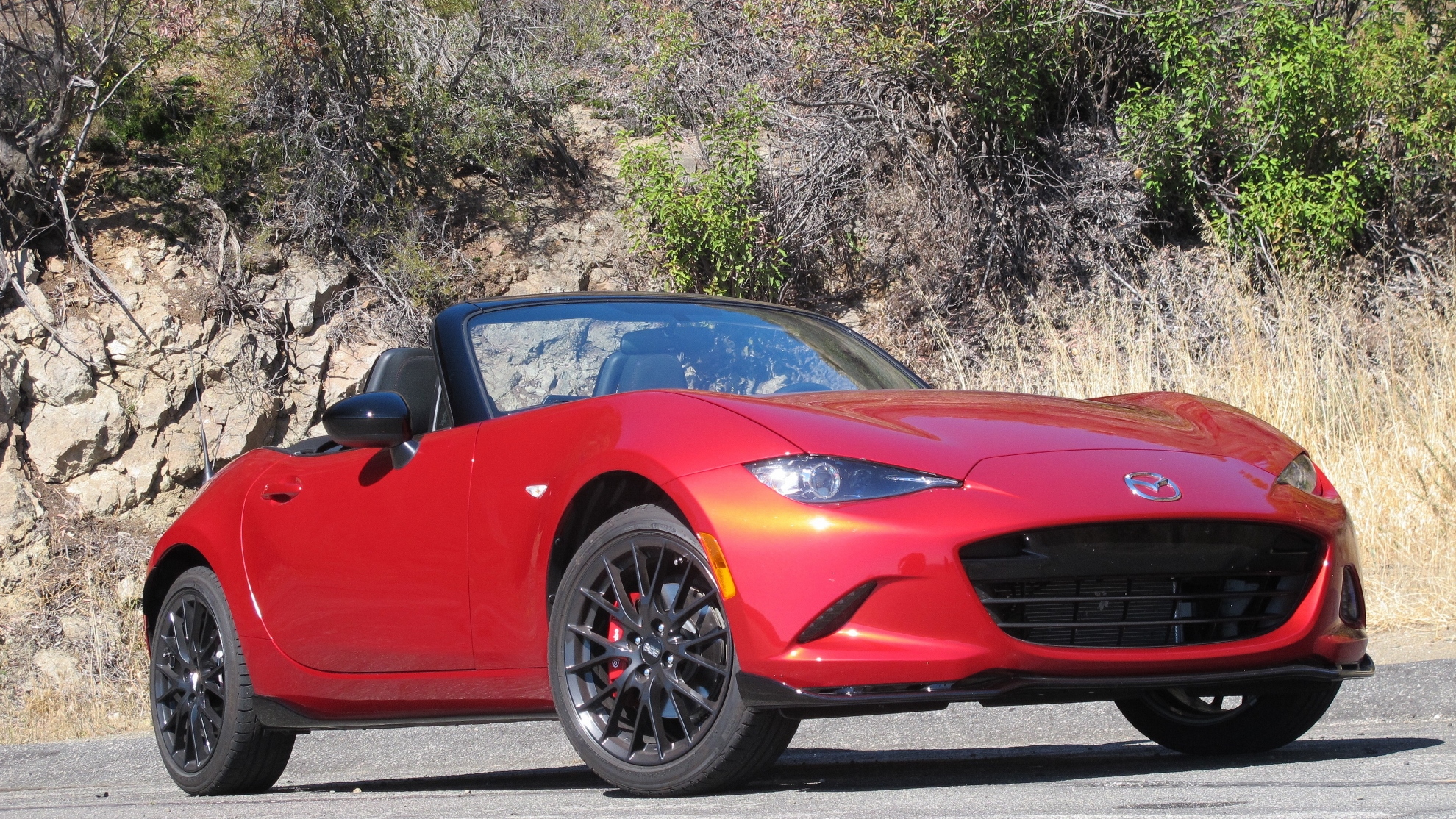 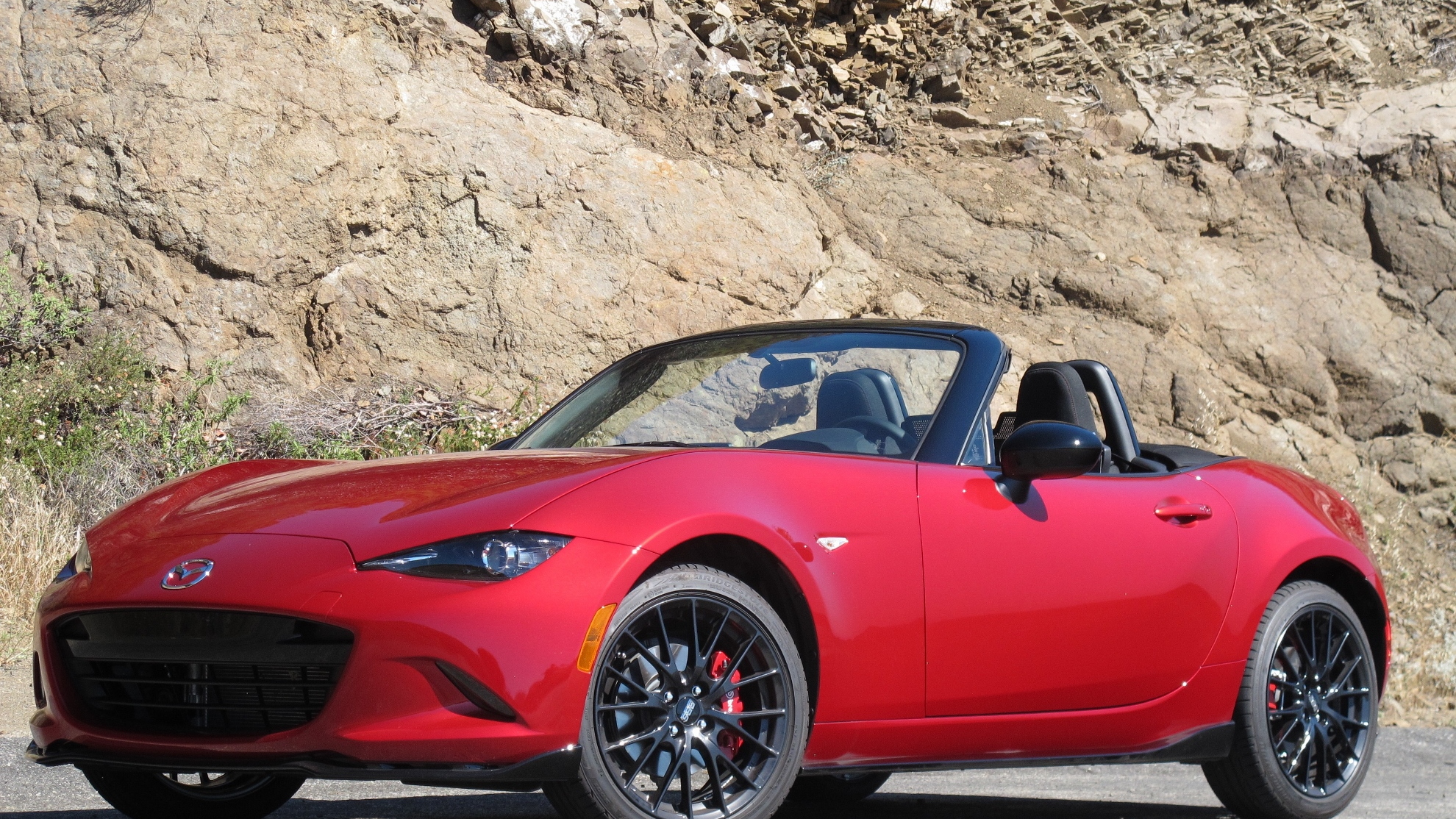 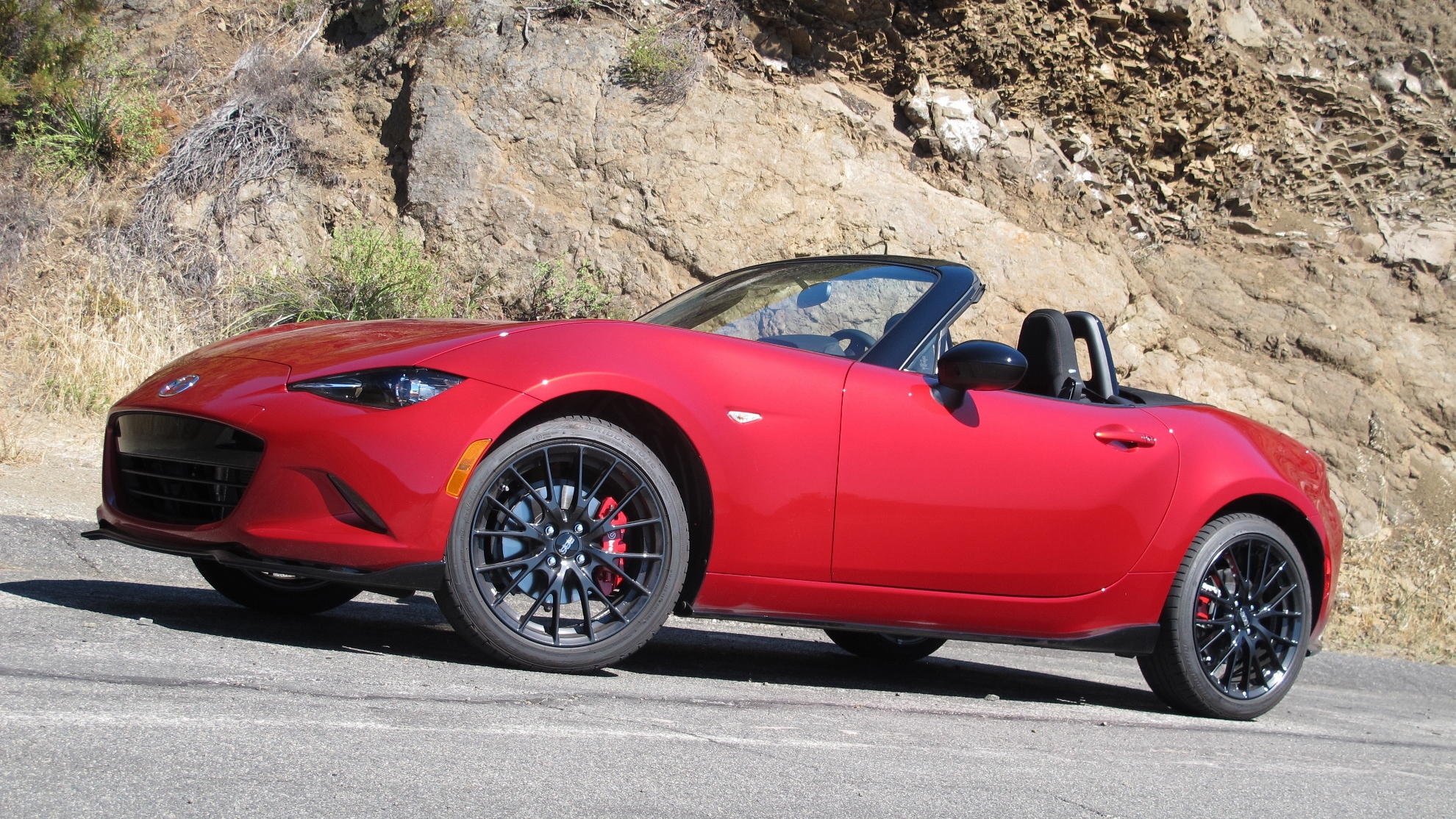 What’s an automaker to do when it’s time to redesign a car that is universally loved? Simple, give its fans more of what they love. In the case of the Mazda MX-5 Miata, more equals less.

Since it was introduced in 1989, the Miata has offered the fun, engaging driving experience that can only be achieved through light weight. With a 2016 redesign, Mazda has done its best to take even more pounds out of its featherweight roadster.

Employing a “gram strategy” that evaluates every component of the vehicle, Mazda engineers were able to make the fourth-generation Miata, dubbed ND internally, 150 pounds lighter than the third-generation, or NC, Miata. Forty-four of those pounds came out of the body thanks to slightly smaller dimensions and greater use of high-strength steel and aluminum. The ND Miata is about three inches shorter, 0.6 inch wider, and sits 0.4 inch lower than the NC Miata. The wheelbase is also 0.8 inch shorter and the front and rear track is a half-inch wider. While the NC used aluminum for the hood, decklid, center tunnel, and underbody crossbrace, the ND adds it in the front fenders, roll hoops, front and rear bumpers, and portions of the top and floor. 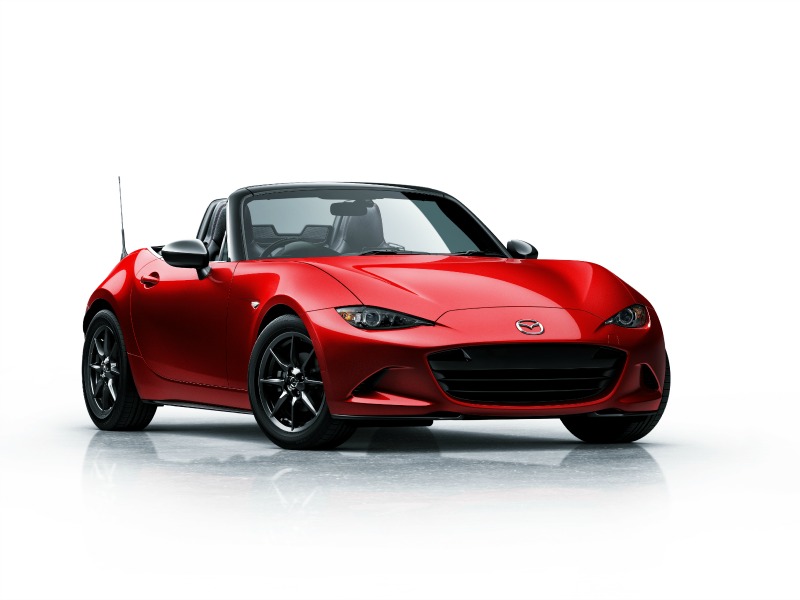 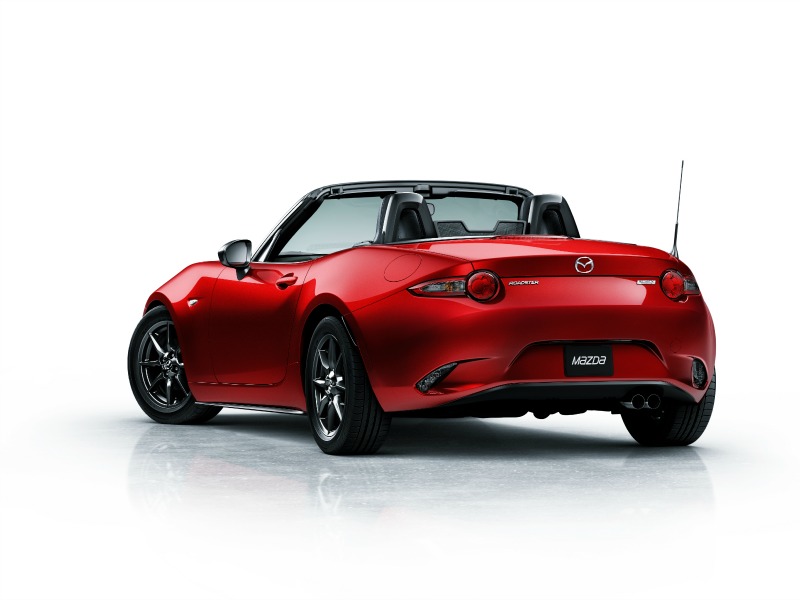 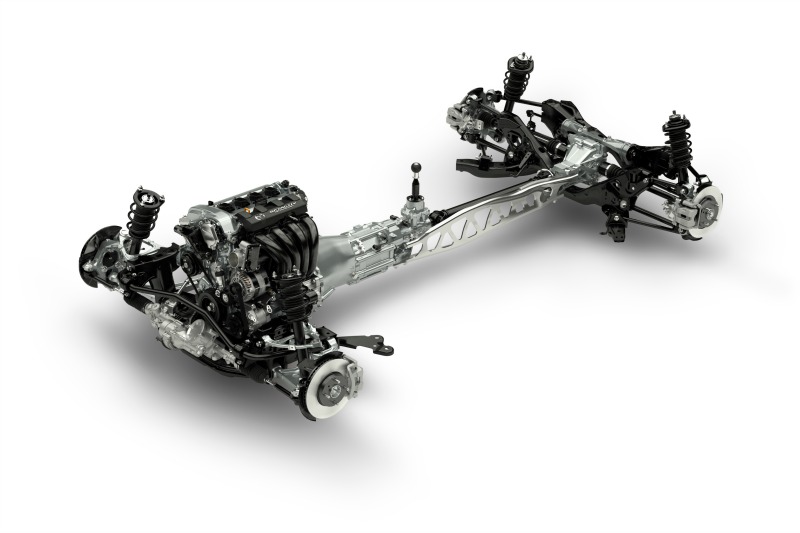 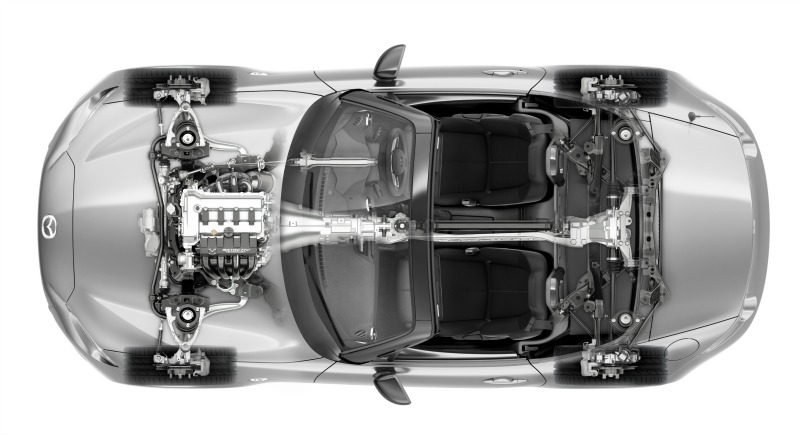 The less-is-more approach extends to the new engine. While the last model used a 2.0-liter four-cylinder that produced 167 horsepower and 140 pound-feet of torque, the new Miata adopts the SkyActiv 2.0-liter four that made its debut in the CX-5. It weighs 18 pounds less than the outgoing engine and makes 12 less horsepower, but it provides better performance due to an additional eight pound-feet of torque, an improved torque curve, and the car’s lower weight. It also delivers about 25 percent better fuel economy, with EPA ratings of 27 mpg city/34 highway with the manual transmission and 27/36 with the automatic.

So how does all that engineering come together? We traveled to Westlake Village, California, to test the new Miata on SoCal canyon roads to find out.

Mazda offers the Miata in three models with two suspension setups. The Sport and GT models are softer, while the Club model’s Bilstein shocks and front shock tower brace make it firmer and more rigid. The Club also gets a limited-slip differential, a front air dam, and a rear lip spoiler.

Opinions vary among our staff about the effect of the rear suspension changes, but I feel it creates razor sharp turn-in response and makes the car rotate more willingly than ever. These traits are most noticeable on the Club model; its stiffer suspension allows less squat at the rear, making the rear tires follow the car’s intended path quicker. The softer tuning of the Sport and Grand Touring models allows that squat, and may therefore be more familiar to previous Miata owners.

With either suspension, the Miata offers a compliant ride that drivers could easily live with on an everyday basis. Sport and GT models are softer, but they still handle quite well. Conversely, the Club reacts quicker to steering inputs, but still rides smoothly. Both versions allow some body lean that provides feedback as the car reaches the limits of grip. Choosing one suspension setup does not mean foregoing the strengths of the other.

Mazda has also switched from hydraulic to electric-assist power steering. Thankfully, Mazda engineers have managed to retain road feel while making the steering quick and direct.

The brakes are actually slightly smaller than the outgoing model, but with less car to carry around, they provide confident stopping power and a natural pedal feel.

If I have a complaint about the new Miata’s handling, it would be that it’s too grown up. Historically, it was easy to slide the rear end of the Miata, even at low speeds. It now sticks too well to do that easily. You can still have plenty of fun behind the wheel. It’s just not as easy to be a hooligan. 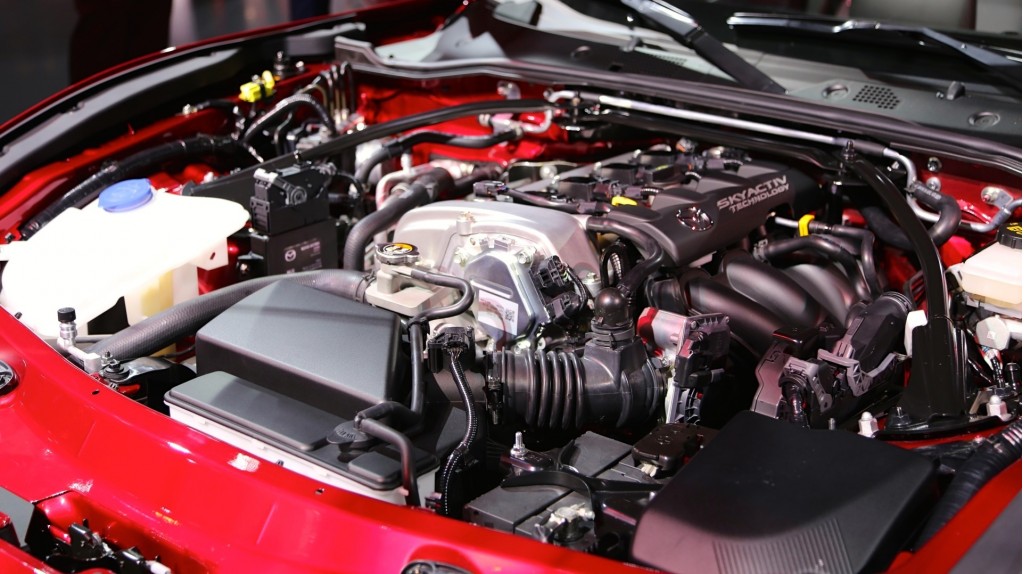 The Miata’s 2.0-liter engine isn’t a world-beater in the other Mazdas it powers, but it is fun in the Miata. While it doesn’t produce as much horsepower as the outgoing engine, it has a stronger torque curve and it revs just as freely. The 155 horses handle the light weight of the Miata quite well, pushing this spritely roadster from 0 to 60 mph in about six seconds, which is a second quicker than the last year's more powerful engine.

Buyers have a choice of a six-speed manual transmission or a six-speed automatic. The manual offers smooth, tidy throws and a natural clutch feel. It’s wonderful, but it isn’t quite the snick-snick, short-throw gearbox of previous generations.

While I can’t understand choosing an automatic in the Miata, I have to reluctantly admit that it works pretty well. Automatic buyers get a Sport mode that holds gears longer. In Sport, the automatic taps into the engine’s power well, keeping enough torque on tap to power out of corners on canyon roads. With Sport mode switched off, power isn’t as readily available, but the engine is more relaxed for cruising.

The Miata has always been designed around the driver, but this generation makes life even easier from behind the wheel. The seating position has been slightly lowered and moved inboard toward the center of the car to give the driver more of a feel for the road and how the car is reacting to it.

Mazda also carved out as much space as possible for the driver, making life bearable for taller folks in this tiny car. That includes our own Bengt Halvorson, who fits despite his 6-foot, 6-inch frame. This was made possible by adding a few millimeters more head and legroom, slightly more tilt in the steering wheel, and thinner seatbacks that allow for an extra click of recline. We find both the base cloth seats and the leather seats in the GT to be comfortable and supportive, even for wider backsides.

The top is also easier to open and close from the driver’s seat. Opening it requires operating a latch and pushing it back, where it locks into place. Closing it is just the opposite. Push a button and a spring pops it up. You then reach back with your right arm, pull it forward, and latch it back into place. The spring action and lighter overall weight mean less strength is required to operate the top.

Not all the news is good, however. The passenger seat isn’t as spacious as the driver’s seat and the passenger has to deal with a hump in the floor. Small items storage is also woefully lacking. There is barely enough room for a cell phone at the base of the center stack (which features a pair of USB ports), and the glove box is a small cube between the driver and passenger. There are also no built-in cupholders. Instead Mazda provides a pair of cupholder stalks that can be inserted into a pair of slots at the back of the center console—where they don’t interfere with shifting—or into a single slot off the side of the center console, where it intrudes upon passenger leg space. 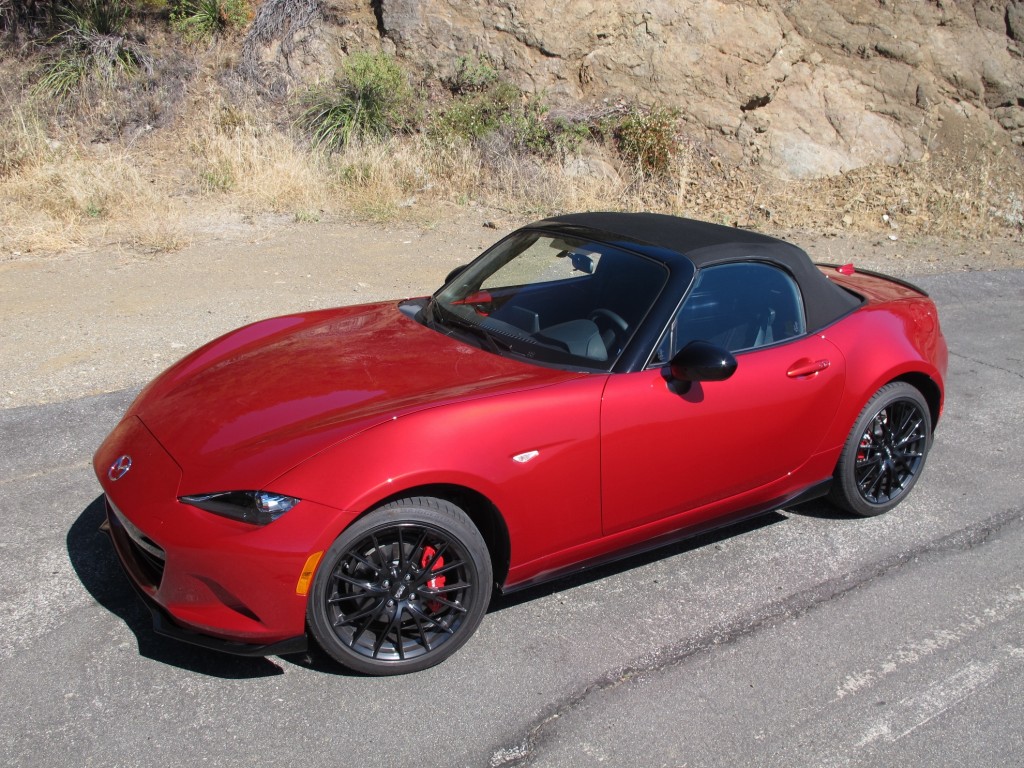 A day of driving the Miata through twisty California canyon roads proved to be an absolute joy. The modest power is plenty for so little weight, the handling is brilliant and engaging, the ride is as compliant as you’ll find in a family sedan, and nothing beats the fun of top-down driving. The 2016 Mazda Miata is proof positive that less truly is more.