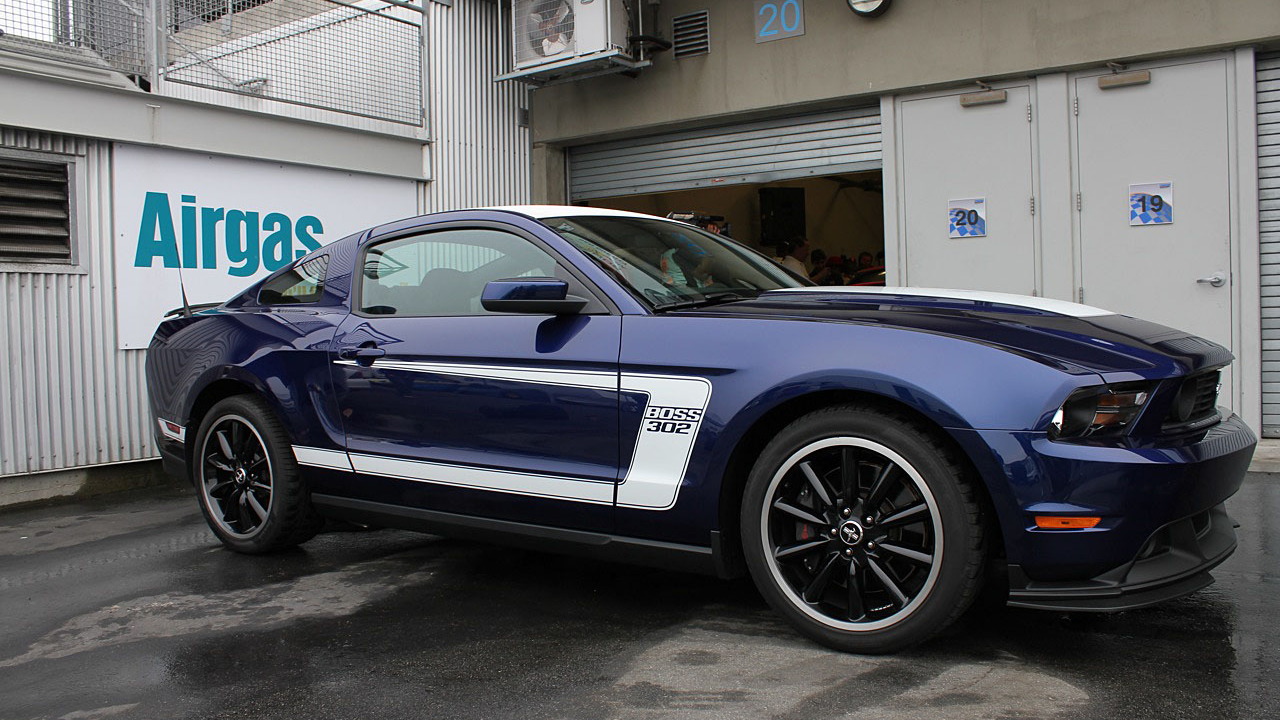 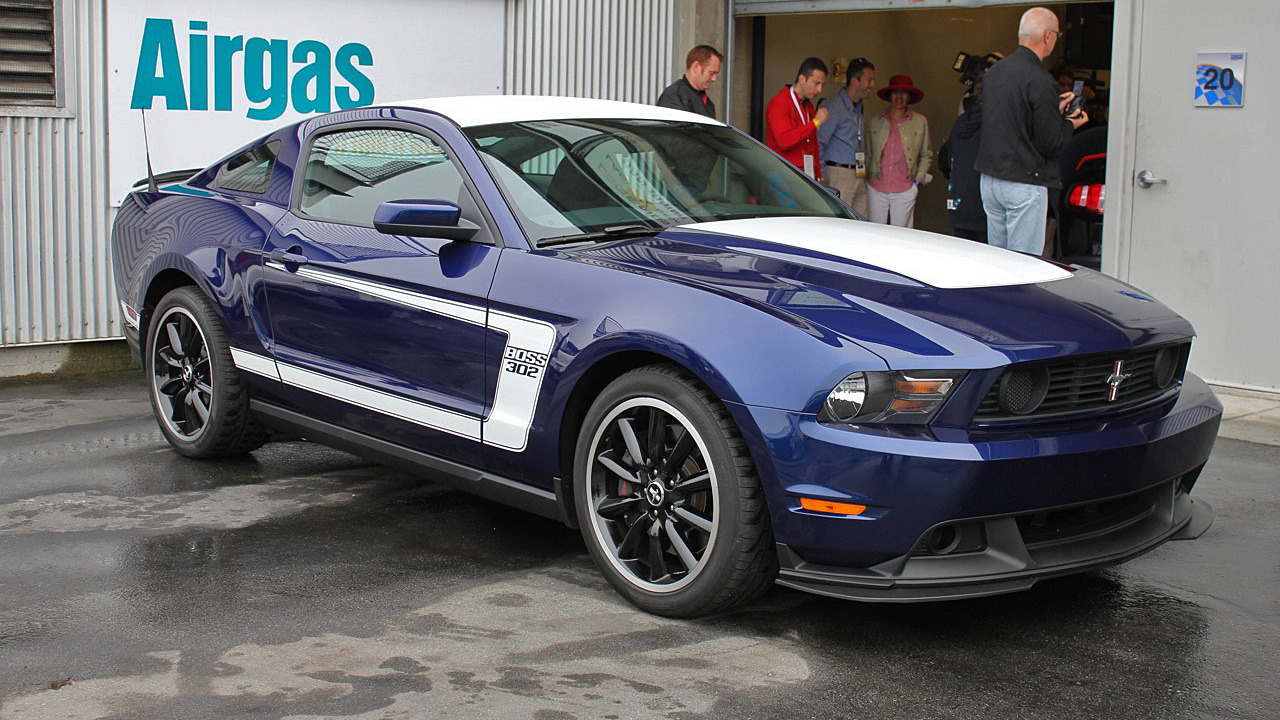 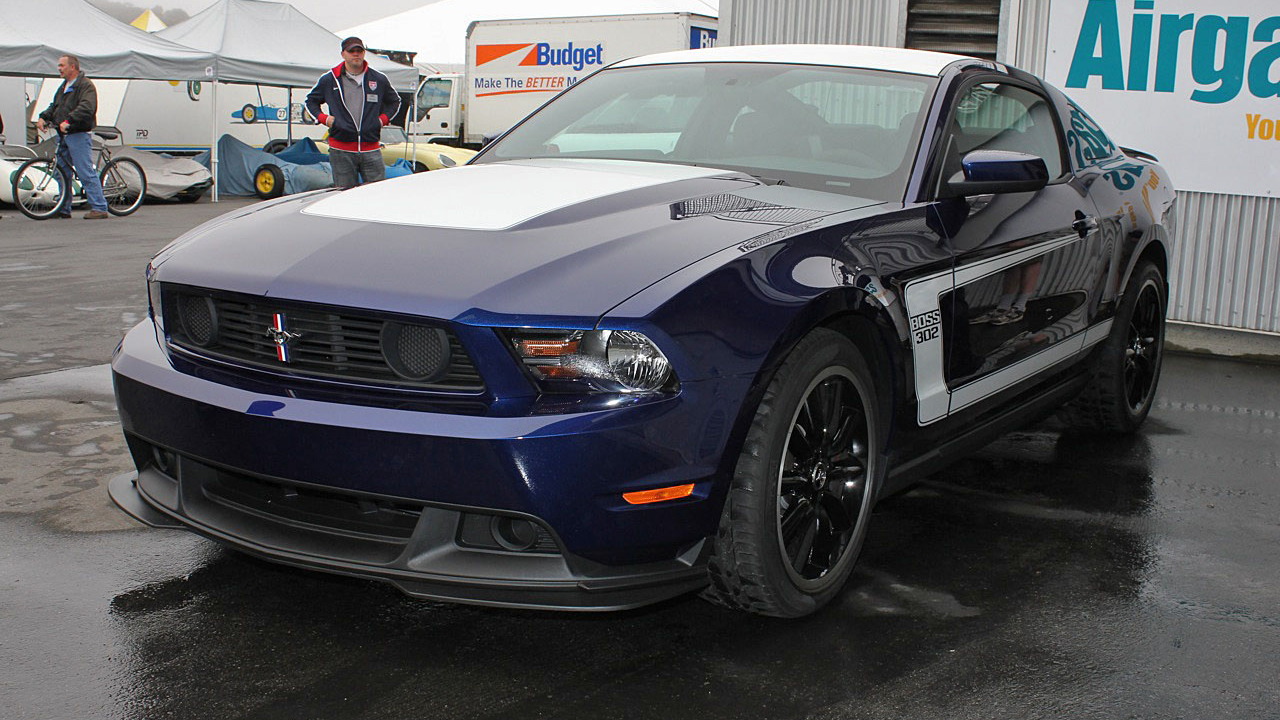 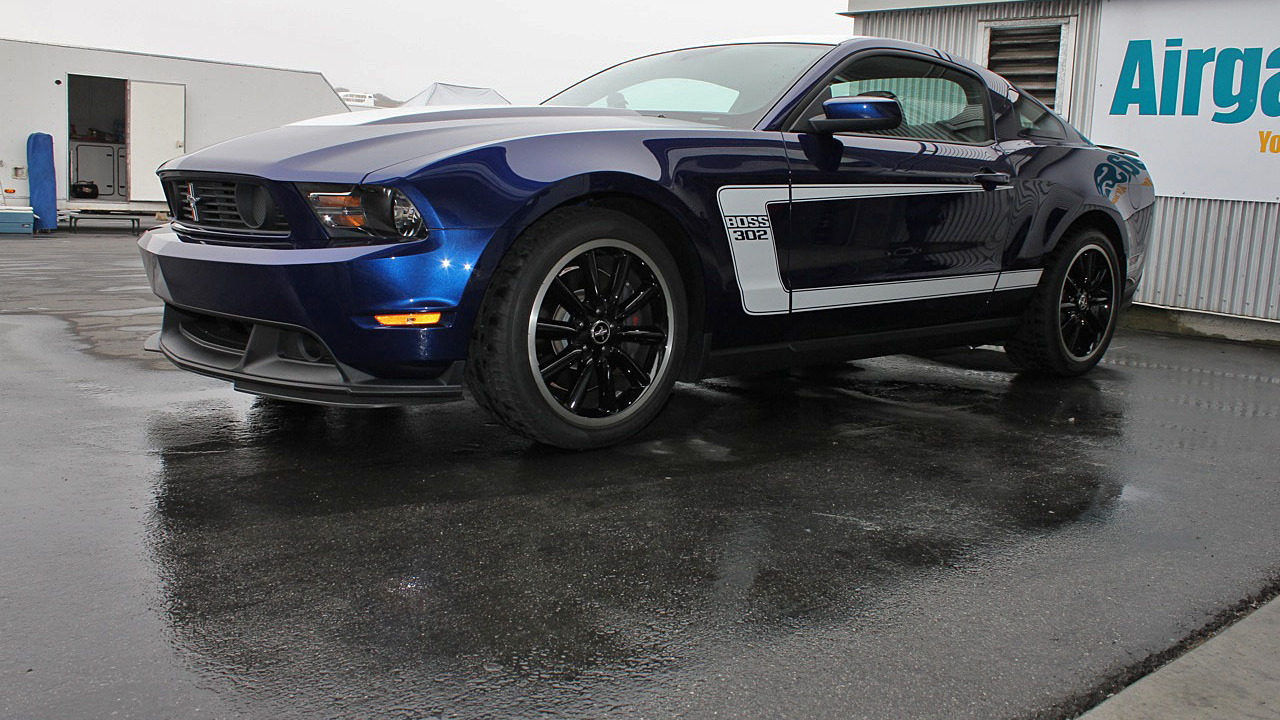 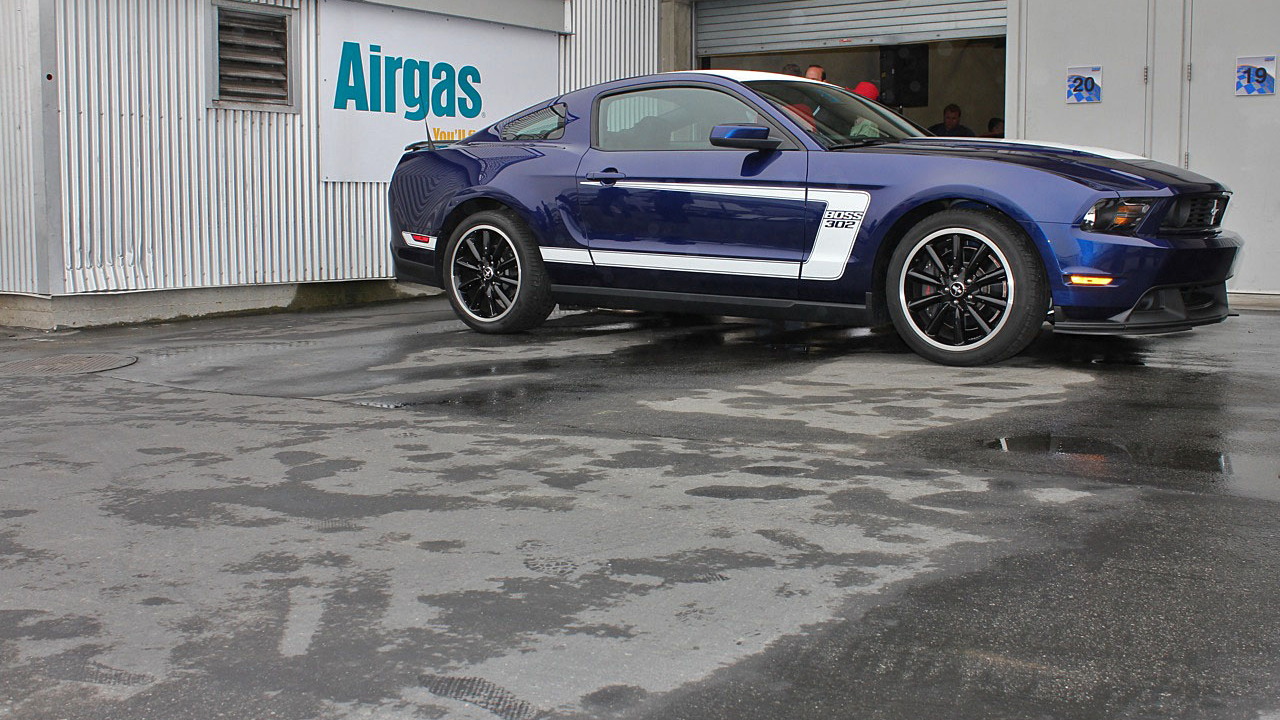 By the time you've settled into lap three around Laguna Seca, the Boss is shouting at you and you don't even care.

This isn't your office, so revel in it. This Boss hammers your tympani with a proprietary blend of pleasure and pain--sound familiar?--but none of the kvetching over expense reports or missed deadlines. It's watching you like a hawk, for sure, lipstick video cameras stalking you with paparazzi precision, but they're only there to document all those sweet apexes you're kissing while you work.

But make no mistake: this Boss is in the driver's seat, too. Not you.

The 2012 Mustang Boss lured me to Laguna Seca this week, with the promise of a first drive and the simultaneous threat of looping one, live for those in-car cameras. Laguna's a fairly easy track to learn, but this Mustang's stoked up with 444 horsepower and a 7400-rpm redline.

Unlike the 41-year-old SCCA championship car it's named for, though, it pulls a full g on the track with utter predictability. You could underwrite mortgages with all the high-speed guarantees cooked into its race-bred suspension and huge staggered tires.

You try turning that down.

So, the job at hand: worry less about the threat the Boss makes, and make sure it keeps its promises. 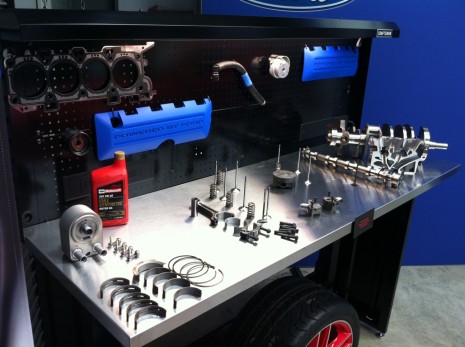 If you're old enough to know what a Boss is, don't skip this part. You've seen the Mustang from its conception, through its dark ages to its convincing renaissance. And you know its short two-year life, at the turn of the Seventies, the original Boss was the brilliant peak of Ford's musclecar era, before it all disappeared in a cloud of leaded gas.

But you need to poke around the tables and trays of dedicated new pieces and parts created for the new Boss to see how specific this new edition really is. Ford's committed more time and money to engineering a truly race-ready vehicle than they might have--but didn't, in the distant past. It's a sign of confidence that the collective braintrust has never resurrected the Boss--and that they knew this one couldn't just be a Mustang GT with a reverse-C sticker kit.

Not to malign today's pretty great Mustang GT, but it's clear which one is the Boss just from the rack of new running gear. From the outside, the Boss gets those decals, while it also gets a new chin with twin splitters ready for brake-cooling ducts, a slight rear spoiler and underneath, side exhausts and smoother armor for better airflow. No massive scoops, just enough cues to flag down the passing racer-at-heart.

Under the hood, it's not overstuffed with easier go-fast pieces, like forced induction--it's finessed with dozens of rethought ones, all optimized for breathing, revving, and durability, Ford says. The valves have hollow stems, the headers are hand-machined, and the intakes are tuned to lift the redline to a breathy 7400 rpm. Output rises to 444 horsepower and 380 pound-feet of torque. Yes, the 5.0-liter V-8 block is related to the one in the GT, it's just better educated about the lightest, quickest way to get to 60 mph and to a 155-mph top end.

Other mechanical upgrades meet the Boss engine's challenge. A reinforced clutch and a 3.73 rear end can pair up with a Torsen differential to make the most of those hundreds of horses. Pirelli tires are staggered in tandem with a suspension lowered 11 mm in front and a millimeter in back. There's a thicker anti-roll bar on the rear end, stiffer springs in front, and adjustable shocks with five screwdriver-ready settings--no expensive electronics needed.

The steering is electric, and tweaked for Boss duty, even more so when you twist the TracKey instead of the standard-issue piece. Ford's understandably proud of being able to tailor the Boss to fit two drivers: the one who just needs to get to work, and the alter ego that needs quicker steering and better fuel delivery and less intrusive stability control tied into its standard vented Brembo brakes for real workouts. The TracKey's technically an accessory--$302, of course--which means the Boss skirts around nosy EPA types while it does its Jekyll-and-Hyde act for its lucky owners.

Flip the black, regular key and the Boss Mustang already feels strong enough to tackle the red stripes and blue-and-white curbs at Laguna.

Holding back is your toughest choice. The Boss' four exhaust outlets bellow out an earthy mating call, even through nearly a dozen additional pounds of sound deadening. The ball shifter begs you either to grab it or to aim it for a bank shot into a corner pocket. The optional Recaro seats bear-hug you into a confident driving pose and the steering-wheel switches let you choose calmer steering when you're stopped. But even with the suspension screws set to a moderate 2, the Boss jiggles and pistons with the rigid compliance of an ISO 9000 officer, even on smooth California tarmac.

Swap out the black key for the red key, and it's like sampling pure oxygen for the first time. Step into the ring, blast out of the pit lane at Laguna, and the Boss shows you who's really in charge. This must be what it's like getting your ass kicked in a cage match with the Michelin man. It's a powerlifter of a race car, always ready to summon another huge load of torque where a stock GT would be gasping for air, ripping off redline runs like it's tearing a telephone book in half.

Grip the sueded steering wheel and hang on as the Boss pulls through Laguna's steep uphills, and you'll swear you'll never drive a hybrid car again, not even on a dare. The intoxication that comes from a big American V-8 is pure drunken ecstasy here--minus all the stumbling you'd do in an ancient Mustang. This one knows its moves better than you do. Add a little throttle here, dive into the brakes there, and the Boss sits and behaves. Stab at the gas and the suspension takes a reassuring set, the massive tires hang on for a little more than 1g of ultimate grip, and even the electric power steering overachieves with decent weighting and quick-release cornering.

Within a couple of laps--like the three banged off in the video up over these words--you'll feel somewhat invincible. A dangerous thing on the track, but massively rewarding at a hormonal level.

Is it the kind of Mustang you can live with every day, and still get a few thrills of a lifetime? You'll have to do it without the niceties of a USB port for your cell phone, with just a single-CD slot, and in the special Laguna edition, without those token rear seats. And only you can tell if the telltale signs of a barely disguised race-car ride are tolerable on the days of the week that don't start with an S.

But if there's a deep-seated need in your soul to own a Mustang, at some time in your life, and you have any secret dreams of driving balls-out in the only socially acceptable way we know of, the Boss is it. It's Americana of the most undiluted kind.