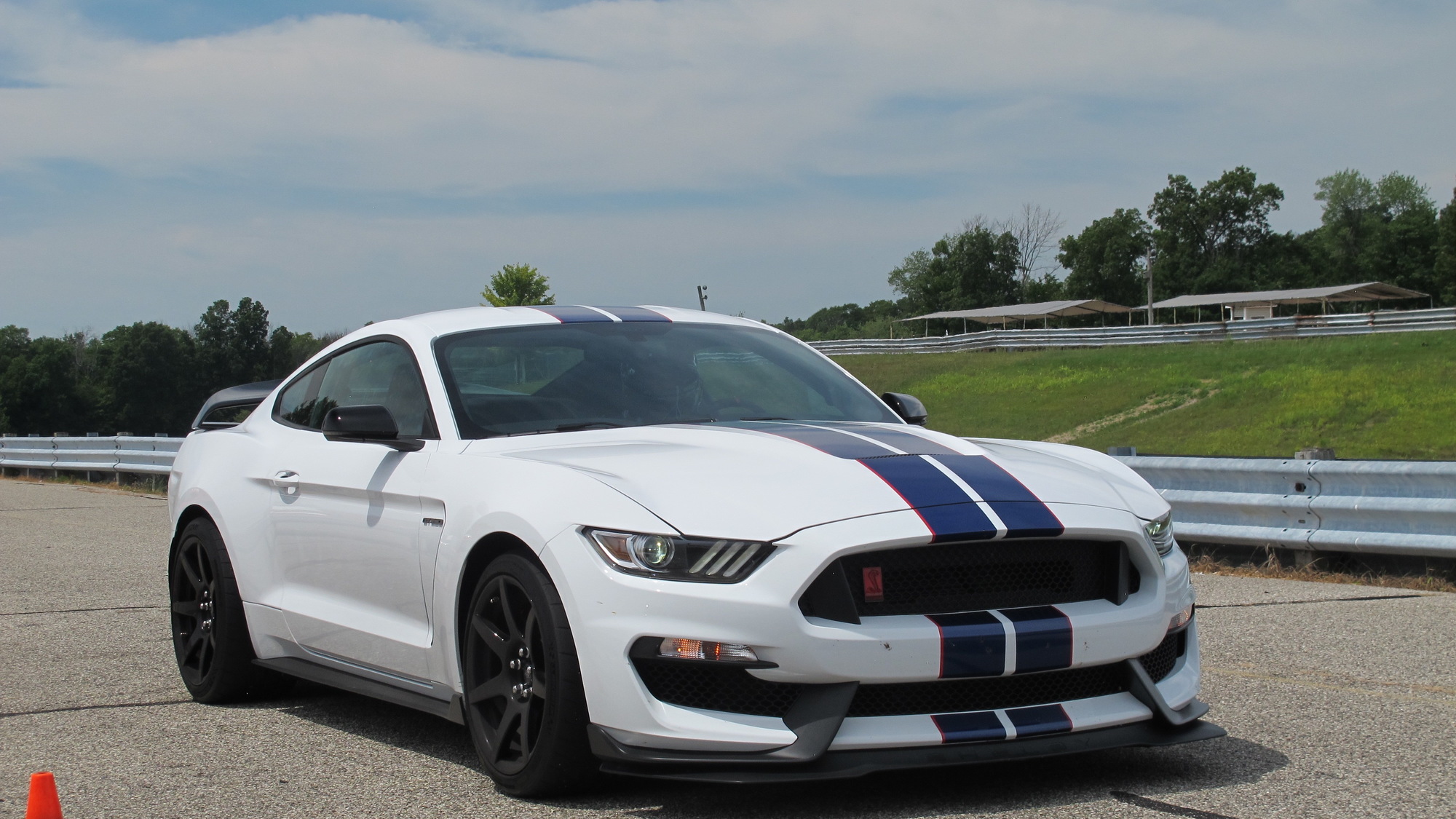 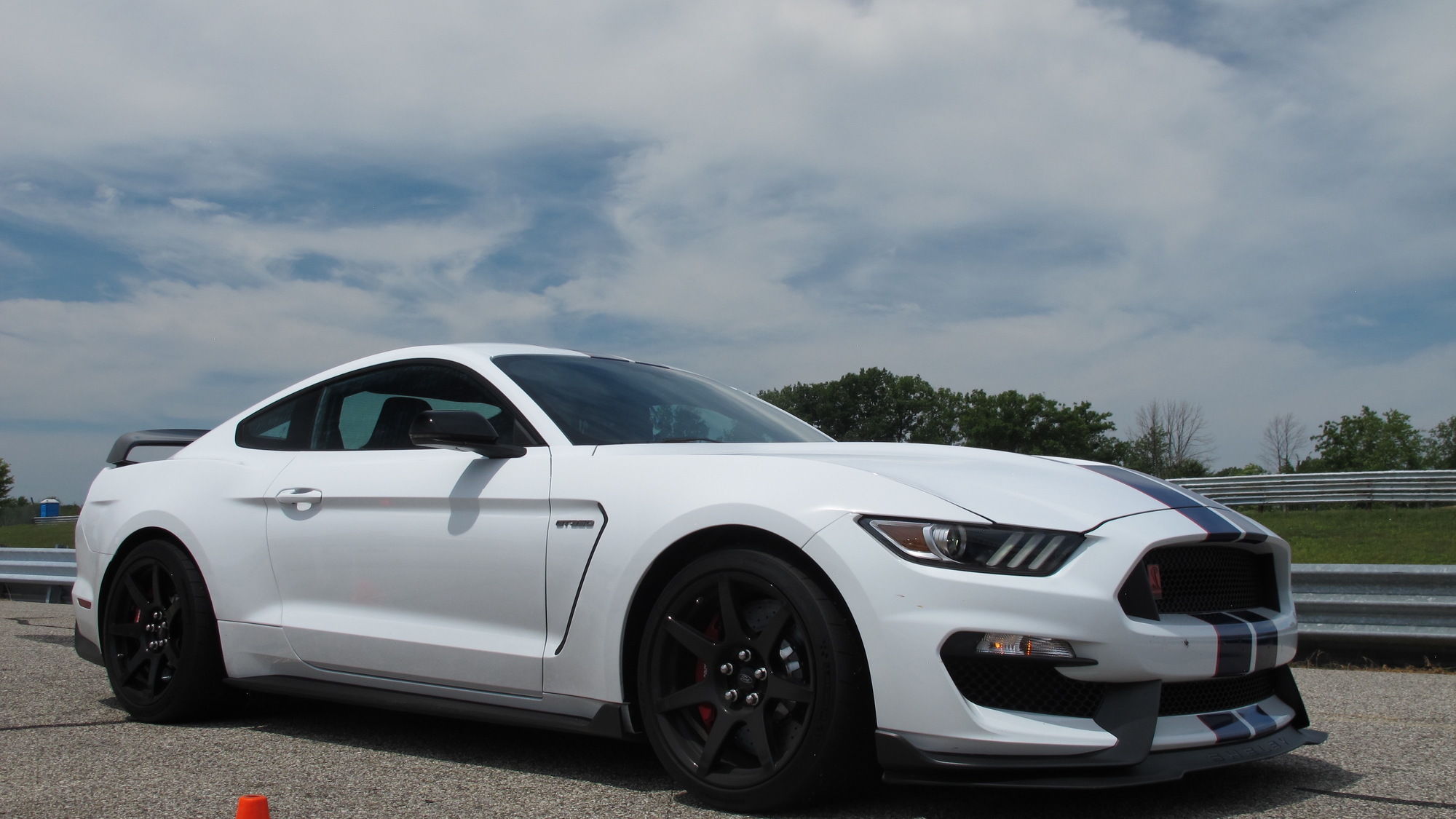 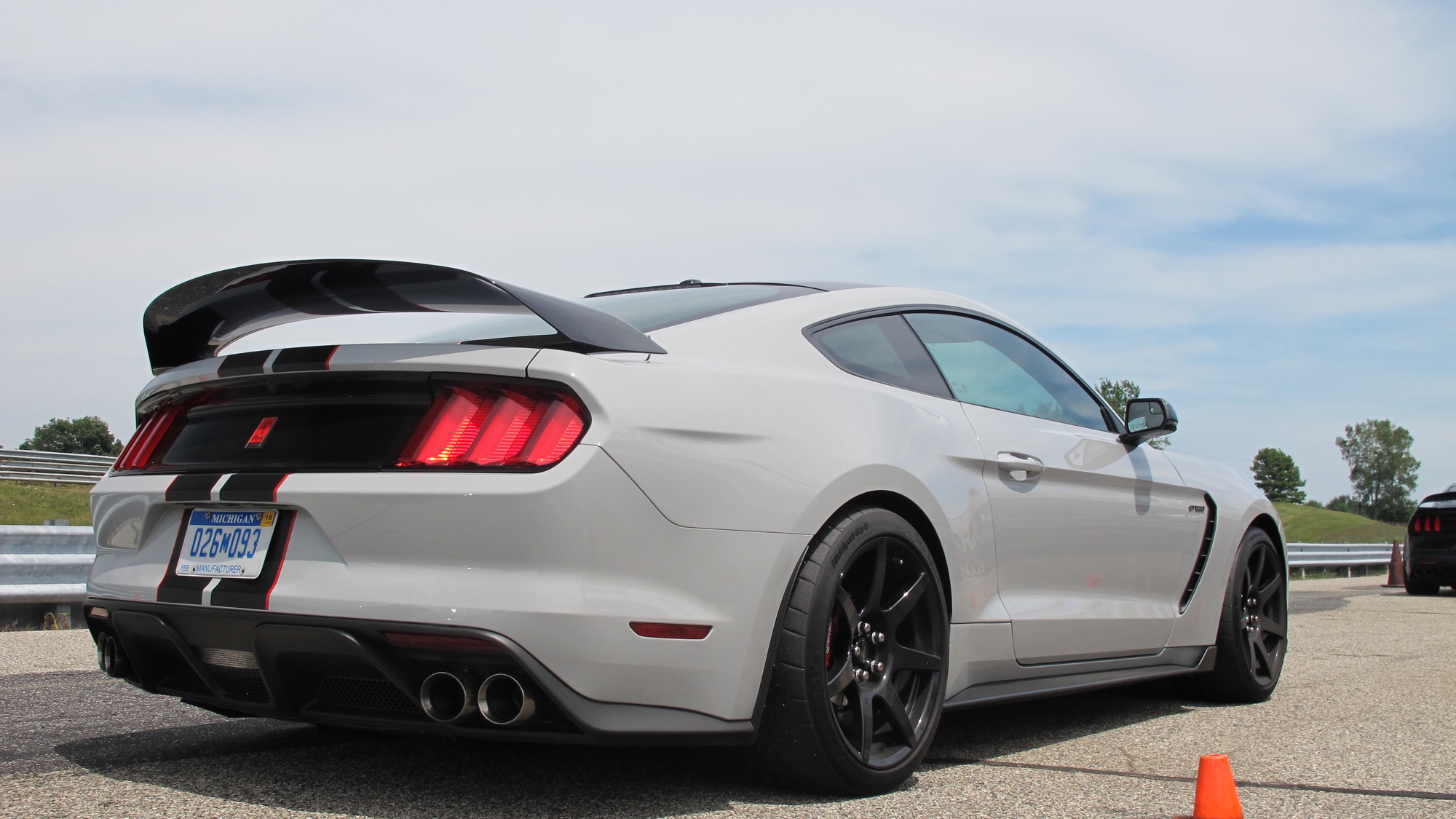 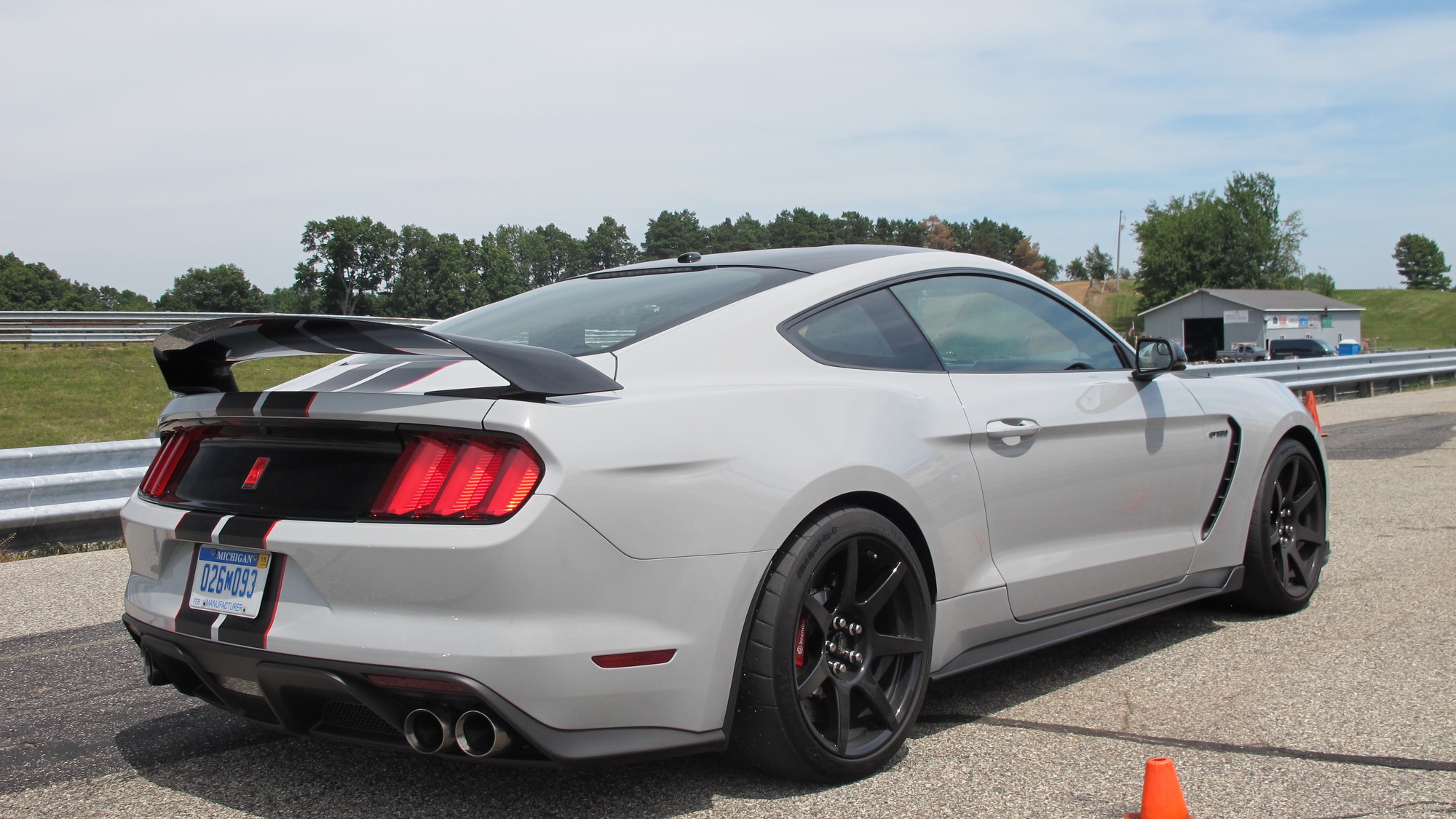 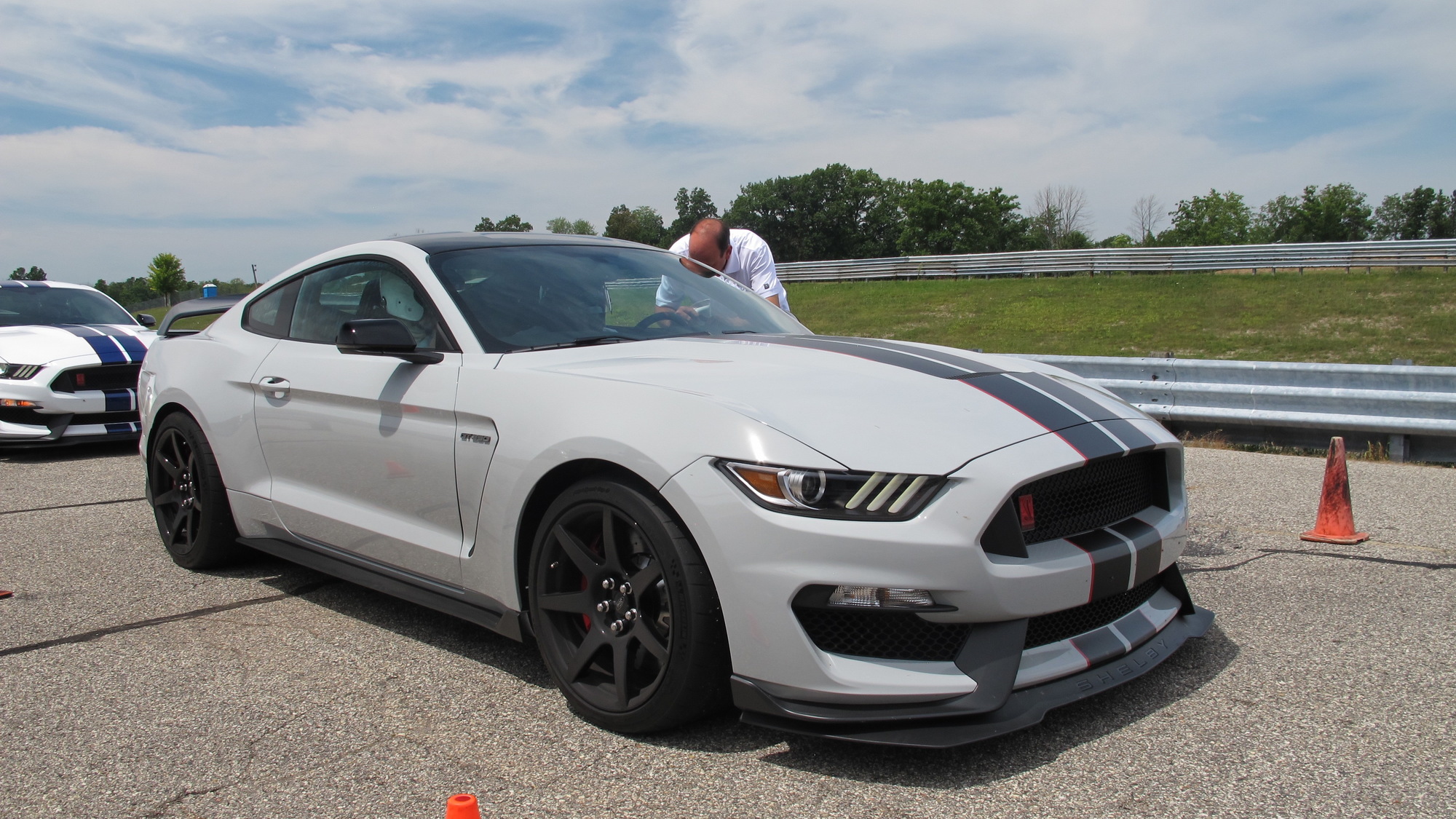 Ford is aiming to make the 2016 Shelby GT350R Mustang the most nimble, fun-to-drive, most track capable Mustang yet. The engineering appears to be there. To the impressive latest generation Mustang chassis, Ford has added MagneRide dampers; big brakes with two-piece rotors, 6-piston front calipers, and 4-piston rear calipers; and massive Michelin Pilot Sport Cup 2 19-inch tires, 305/30s up front and 315/30s in the rear. Under the hood lurks Ford's new 5.2-liter V-8. This engine features a flat-plane crank, revs to 8250 rpm, and produces 526 horsepower and 429 pound-feet of torque.

We are still a month or two away from getting behind the wheel of the GT350 and GT350R, but this week Ford invited us for a ride-along at Grattan Raceway in Belding, Michigan, just outside of Grand Rapids. Grattan is a two-mile road course with a patchy, somewhat bumpy surface. Ford engineers piloted the cars, and my driver was vehicle integration engineer, Tim Smith. Smith chose Track mode from the integrated driver control system, but dialed the MagneRide suspension back to the Sport setting to better deal with the uneven track surface.

The first thing you notice in the presence of the GT350R is the engine note. It's not like anything on the market today, especially not anything American. The flat-plane crank fires at 180-degree intervals, making the car sound like the lovechild of a NASCAR racer and a Ferrari, and the note out of the tailpipe is intentionally loud, especially at full throttle.

Once you are on the track, the dogged grip becomes obvious. This thing sticks in corners like no coupe I've experienced other than the Camaro Z/28. Handling appears to be neutral, too. In about seven laps with Smith, he never slid the car around corners, but I did detect a bit of understeer when he approached one corner a bit too hot and on another occasion the car walked sideways a couple inches in the middle of a turn as it overcame the available grip. It appears that the GT350R offers predictable track behavior with a welcome amount of feedback.

A couple things are noticeably lacking, however. The Camaro Z/28 comes standard with carbon ceramic brakes, but the GT350R has iron brakes. Based on my time in the passenger's seat, that's fine. These are the most powerful brakes Ford has ever put on a Mustang, and they handled four hours of track time just fine. Carbon ceramics are great, but the problem comes when you have to replace them. They are so darn expensive that I would prefer to have the best iron brakes on my track car. I might give up a little stopping power, but I'd save a lot of money.

Ford also doesn't offer downshift rev matching for its six-speed manual transmission. This feature makes Corvette drivers who don't know how to heel-and-toe feel like a hero on the racetrack, including me. Purists will appreciate the lack of rev matching, but I'd like Ford to add it.

After a few laps in the passenger's seat, I can't wait to get in the driver's seat and flog this thing. Ford says it's quicker than the Z/28 around Grattan and just as fast as the Porsche 911 GT3. The BMW M4 and Cadillac ATS-V don't even enter into the conversation. I'm looking forward to finding out for myself just how fun it is to pilot the latest and greatest Mustang.