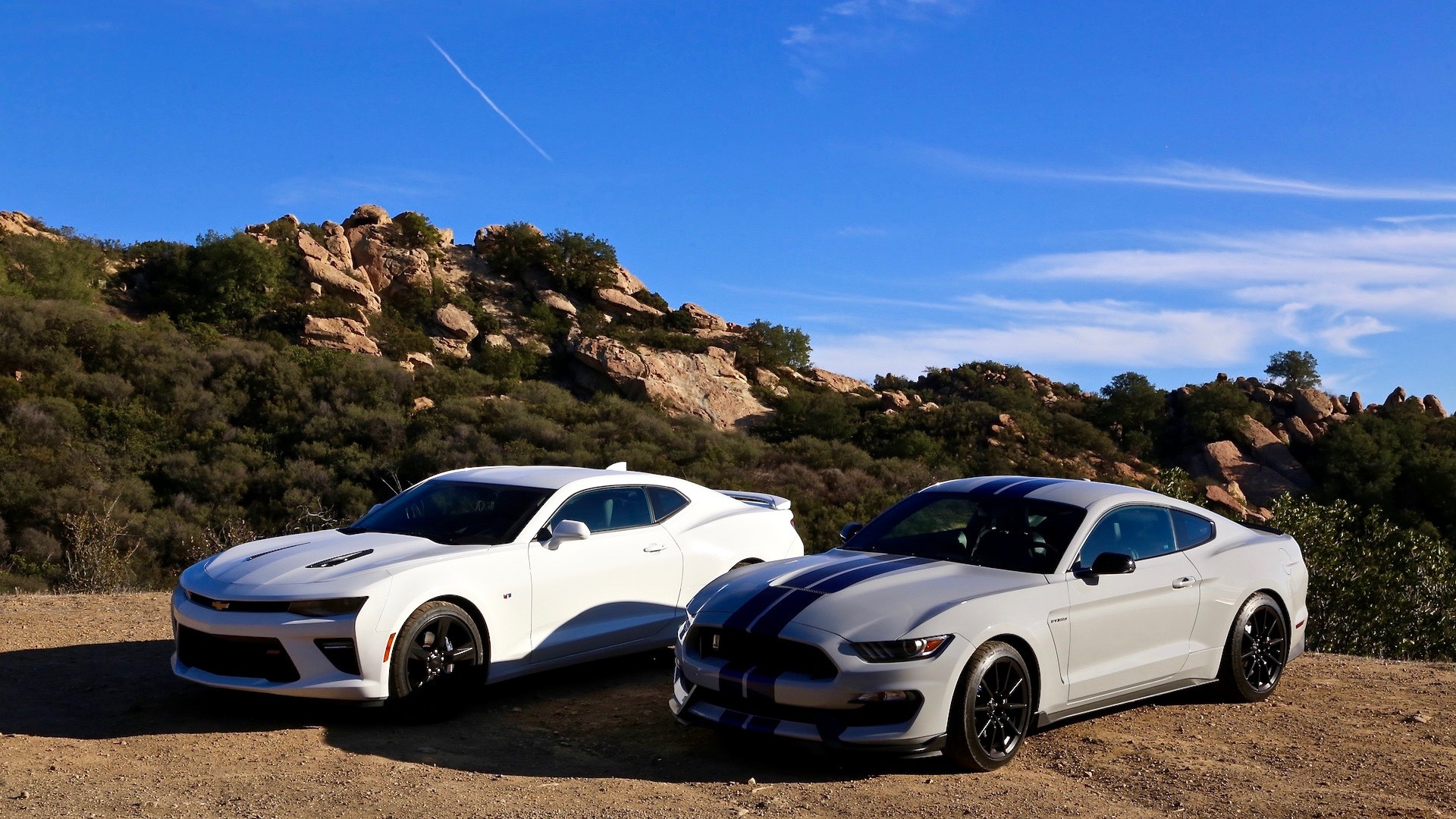 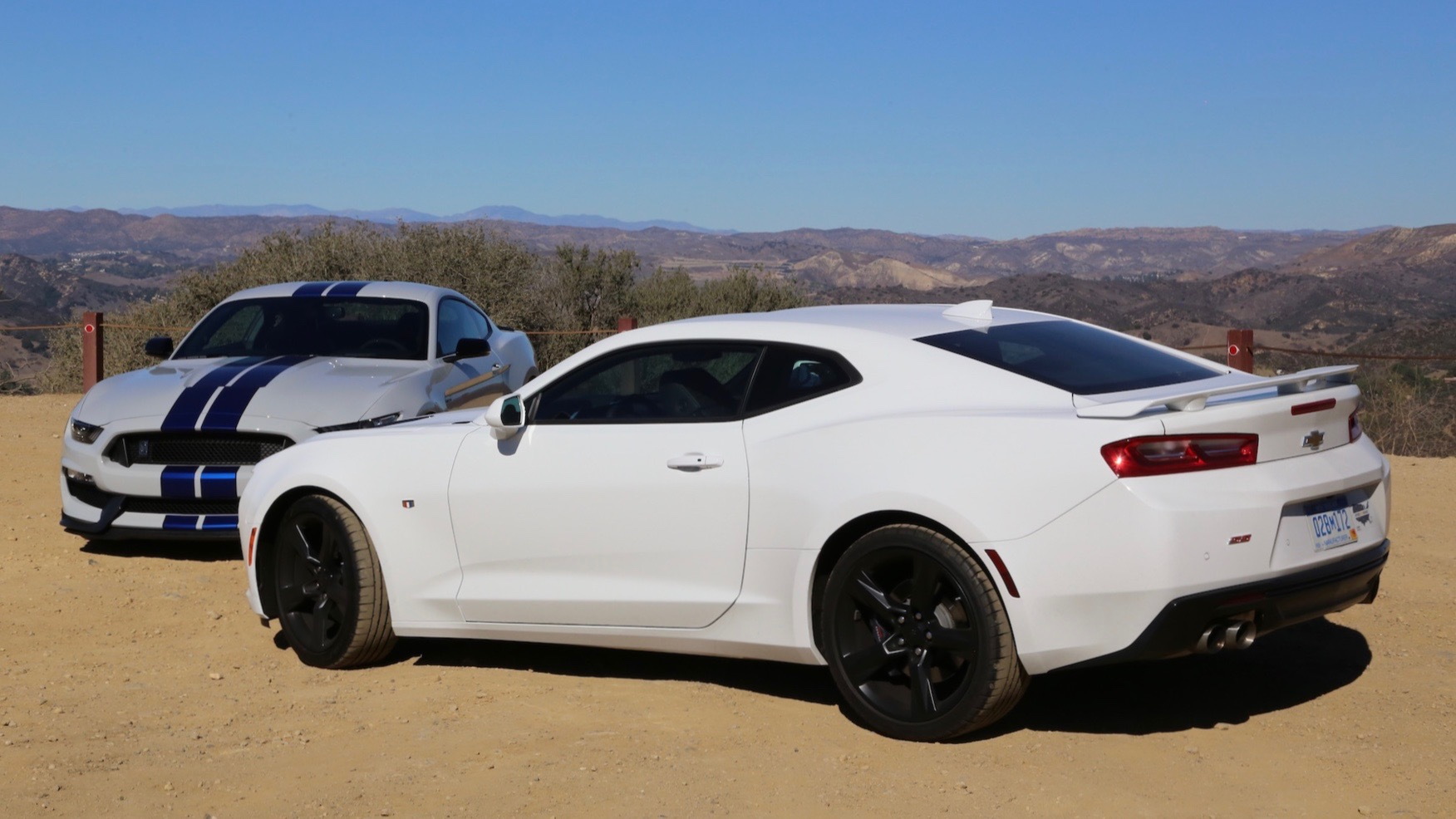 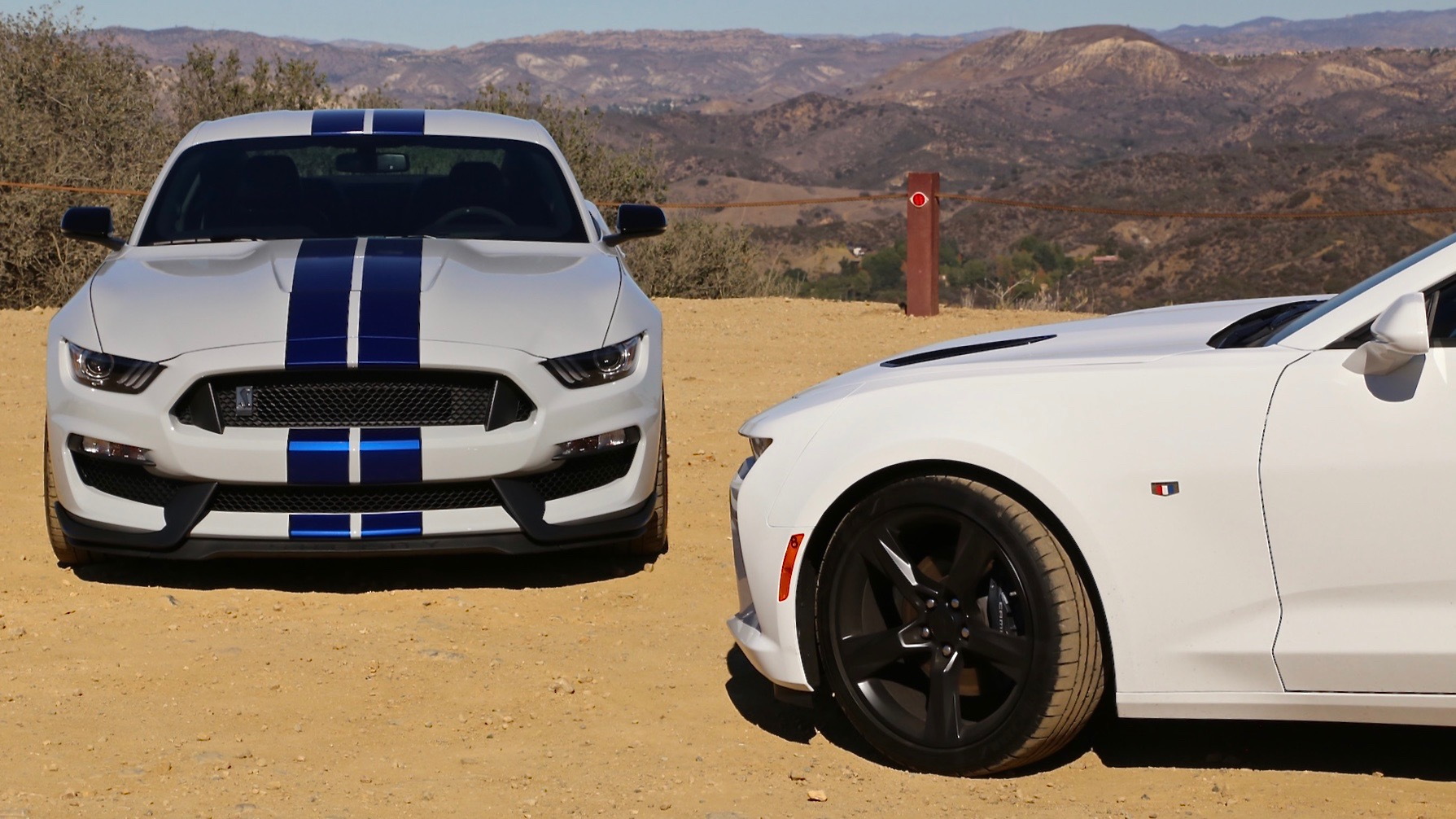 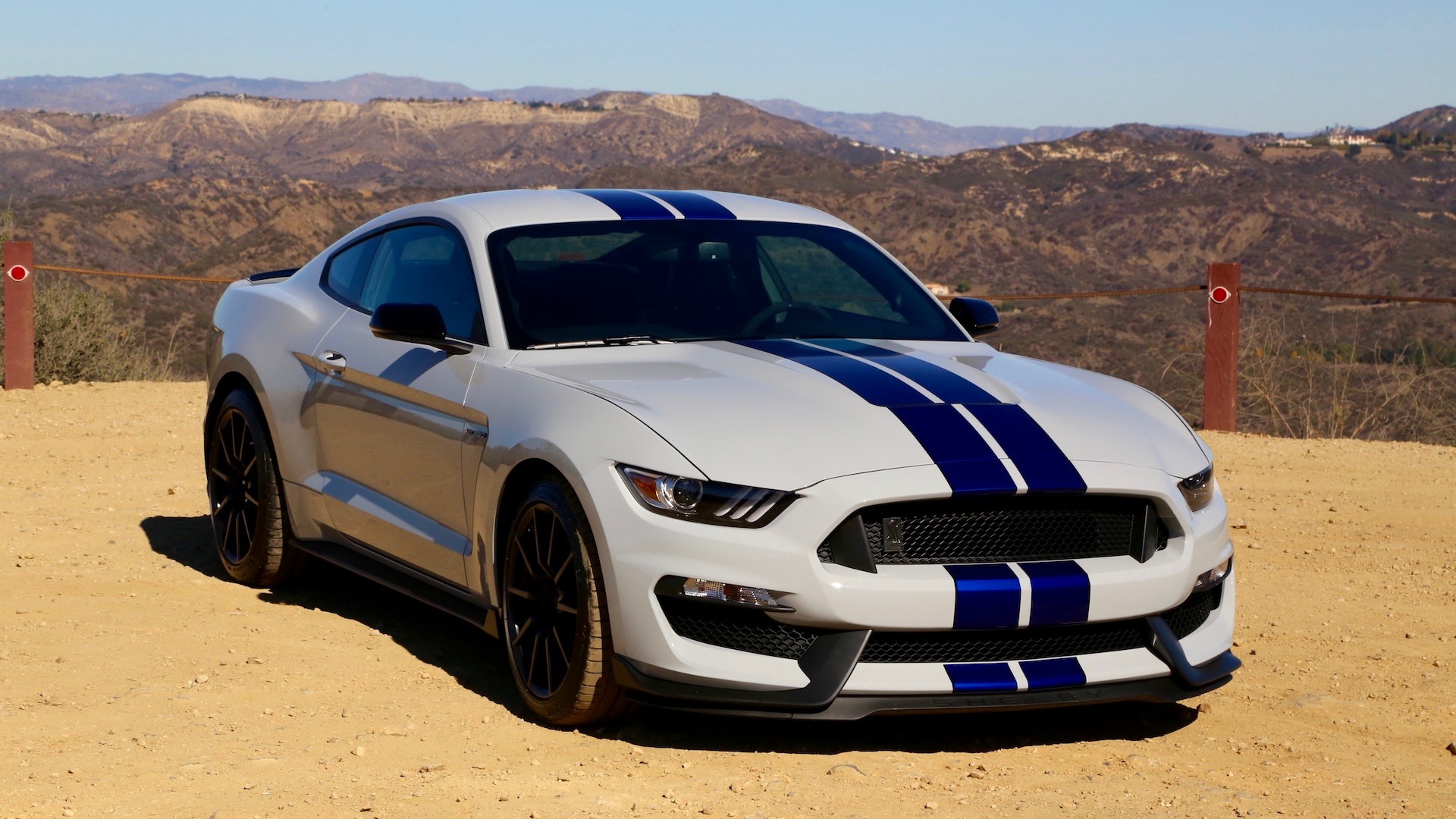 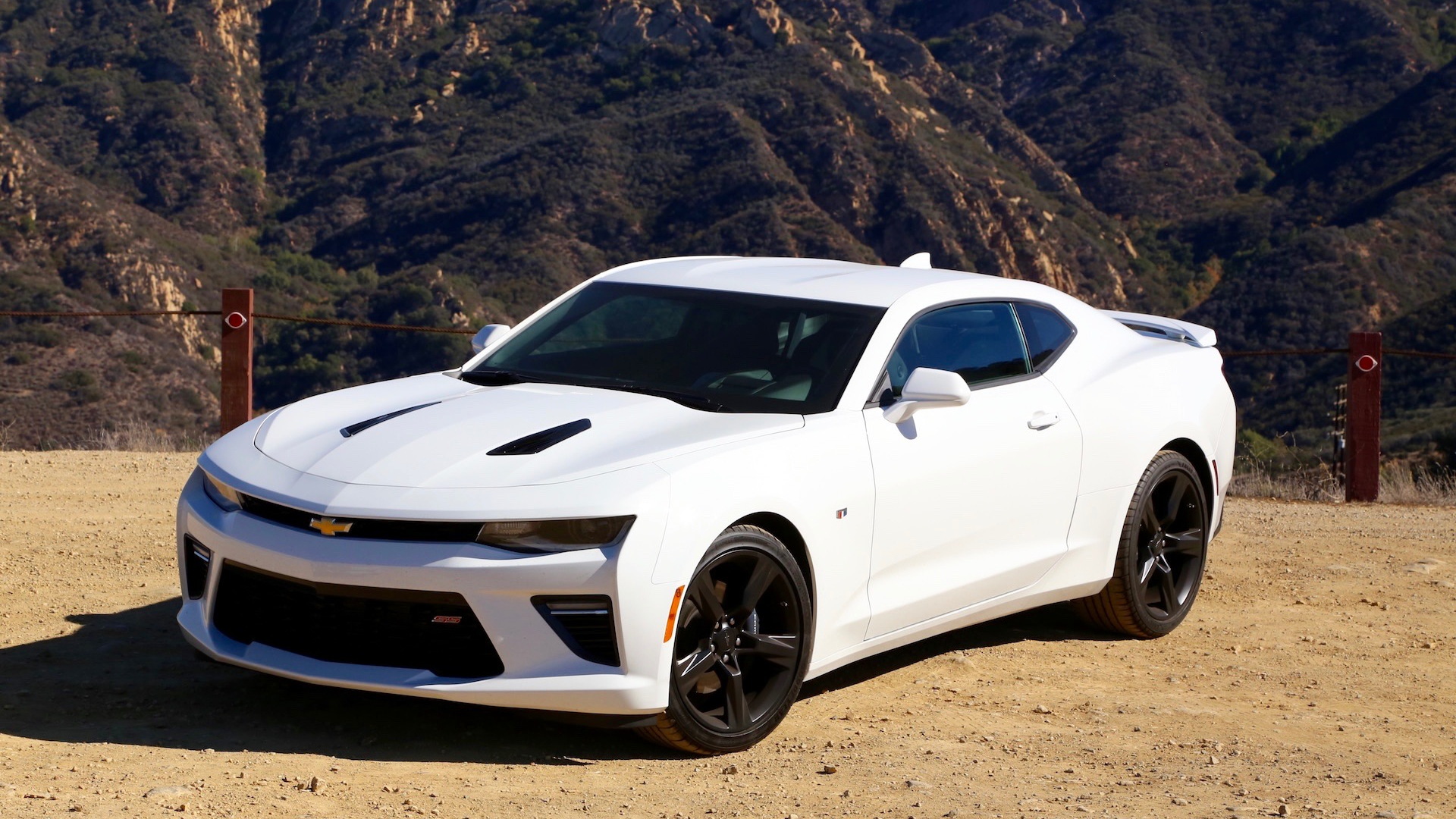 You know, sometimes it's tough to convince our friends and family that this is a tough job. Hard days and long nights. Real work.

Convincing them is about to get impossible. Who else runs buck wild with two of the ballsiest cars on the face of Planet Earth--on a school day?

We did. Drove 'em hard, and put 'em away wet in a Malibu-canyon grudge match.

In this corner, the 455-horsepower Chevy Camaro SS.

And in this corner--the 526-horsepower Ford Shelby GT350.

In case you hadn't realized it, we're in a golden age of horsepower and handling, and these two top guns are fully up to speed. Zero to 60 mph times of about four seconds, quarter-mile runs in the low 12s. These instant classics take aim right at each other.

In the Camaro's engine bay --a lascivious LT1 V-8 on loan from the Corvette. Trimmed out at 455 horsepower and 455 pound-feet of torque, it's an intimidating and sensational piece of hardware.

The Shelby? Oh, nothing but a flat-crank 5.2-liter V-8 with an 8250-rpm redline, that sounds like a Ferrari got hot and heavy with a NASCAR stocker, 526 horsepower, and 429 pound feet of torque. Yeah, just...just that.

Both of them stick it out with six-speed manual gearboxes--Chevy and Ford still #GiveAShift. And both are driven by their rear wheels, as the gods decreed.

We've driven both of these cars all over the country at this point. Around the hairy corkscrew at Laguna Seca, through the arroyo secas of New Mexico and Arizona, and here today, in and out of Malibu's crazy-tight canyon roads. They're both stunning machines, with some distinct perks.

The things we love about the Shelby, well, that's easy. The latest Mustang has finally ditched its live rear axle. There's an independent rear back there, and it makes a world of difference. It's a little too softly sprung in even the Mustang GT, but the Shelby GT350 irons all that out, polishing the 'Stang to a high gloss.

It gets a Torsen rear diff, a set of magnetic dampers that make it firm when it needs to be, comfy when it can be. And that's before you get to the track-ready GT350 R, with its carbon-fiber wing and wheels and ungodly communicative Michelin Pilot Sport Cup 2 tires.

Those tires are magic, but even on the standard GT350, the Mustang has never been better. It's incredibly poised, with incredible grip. It mirrors your steering moves with confidence, and breaks away at the limit with lots of warning.

We're totally fanboying for the Camaro SS, too. With a few Cadillac bits on loan along with the 'Vette motor and first-time-ever magnetic dampers, it's like a greatest-hits package of GM performance pieces.

The Camaro's just never felt this lean, this tight, this well-bred, this right.

It's also a good bit smaller than the Mustang, than even the last Camaro--and every turn-in confirms that reality. You can aim the Camaro SS at corners like a lawn dart, and it takes unerring aim at the softest, most vulnerable point. Then it sticks the landing. Its 20-inch treads and magic-finger suspension do not play--it grips and grins through corners.

You'll have to physically restrain yourself from adding 10 miles per hour to the speedo every time.

These badasses have some down sides, but they're no deal-killers. There are a few more in the Mustang column, though.

It's bigger, longer, and a little heavier than the Camaro, and it feels like it. The interior's better than before, but there's a lot going on, visually. We're not in love with some of the janky little details like the light pipes up front or the why-bother passenger-side dash binnacle.

The Camaro? We dare you to back up in it without using the rearview camera. The back seat's not a back seat, it's a backpack containment facility. The cockpit's a big upgrade, but the sheetmetal hardly looks any different than the fifth-gen car.

We're in deep with both of these all-American sportscars, but one makes a little more sense.

The Shelby GT350 is a straight shooter, the no-excuses Mustang we've wanted forever. At a base price of about $50,000 and with GT350Rs going for well over $65,000, it's a car we'd track a few times of year--then seal up in a nitrogen bubble, under glass, ready to break into it when the autonomous cars finally come to bore us all to death.

The Camaro SS? At about $37,000 bone stock, you could practically have two of them for what a GT350R gets on eBay these days. It's a huge bargain, and at its fire-sale price, you can have two--one for play, one for keeps.

Whichever one you choose, just know this: The Mustang and Camaro aren't pony cars any more, not at these prices. And they're not muscle cars either, not with their next-level road manners.