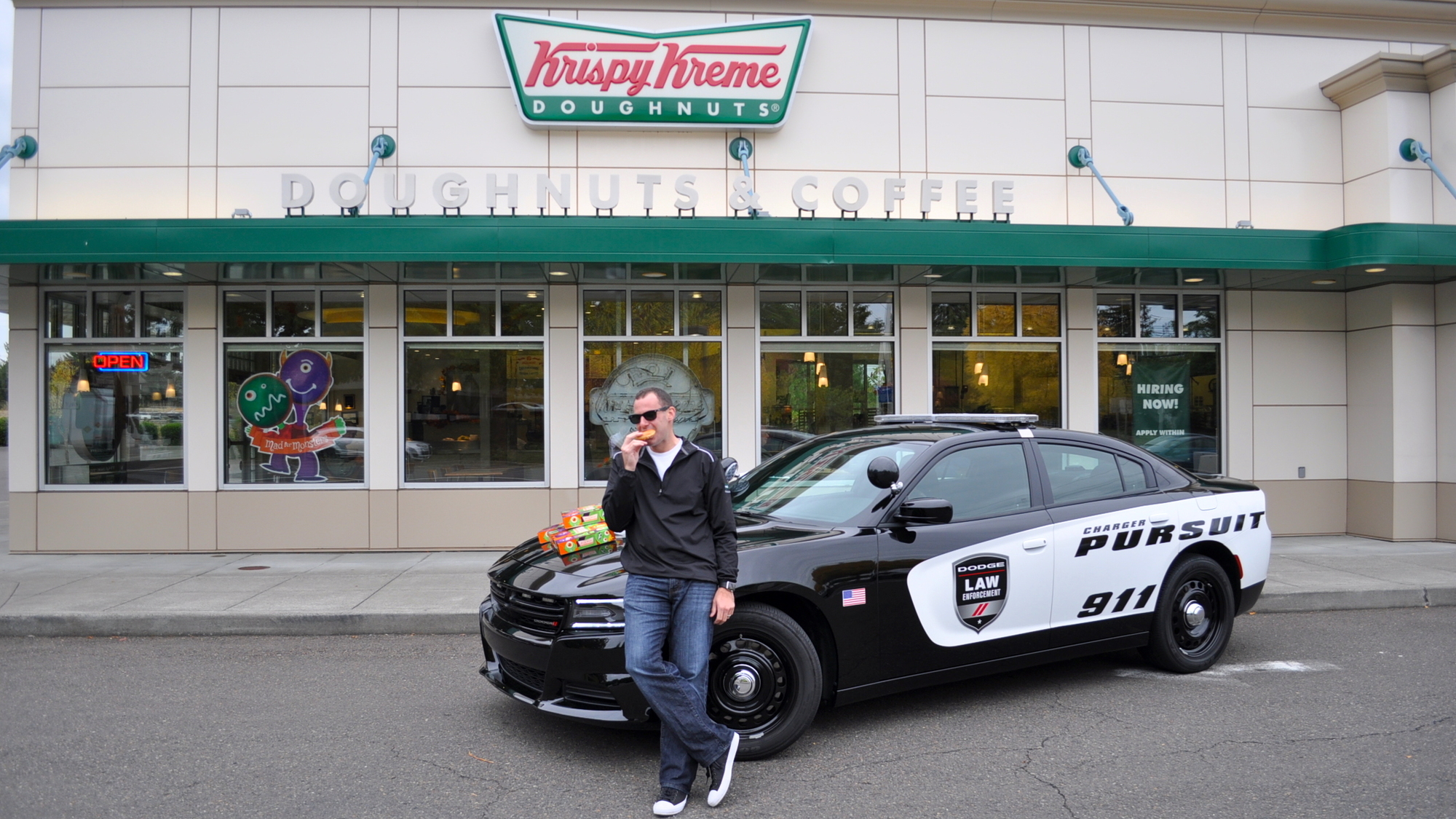 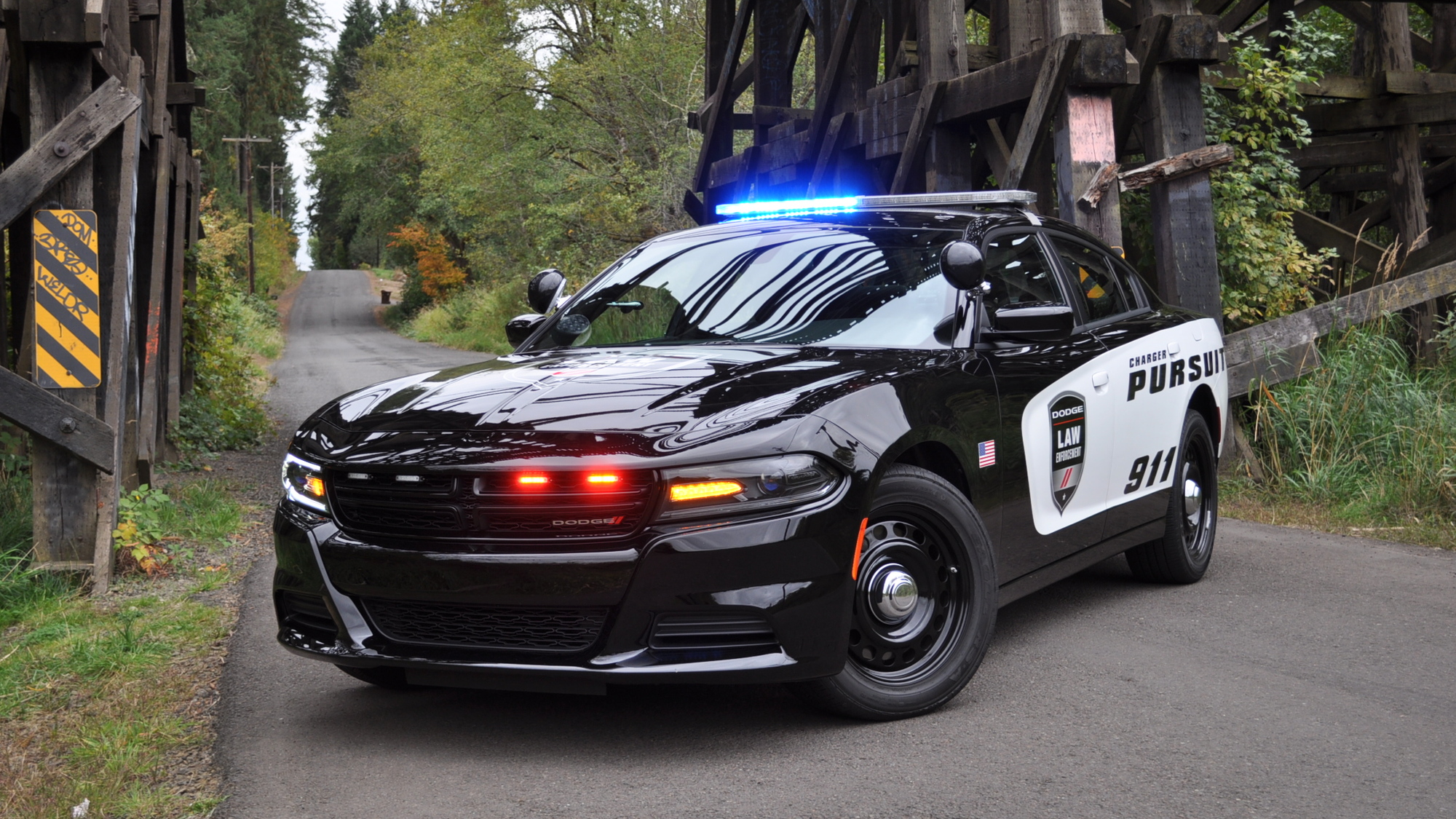 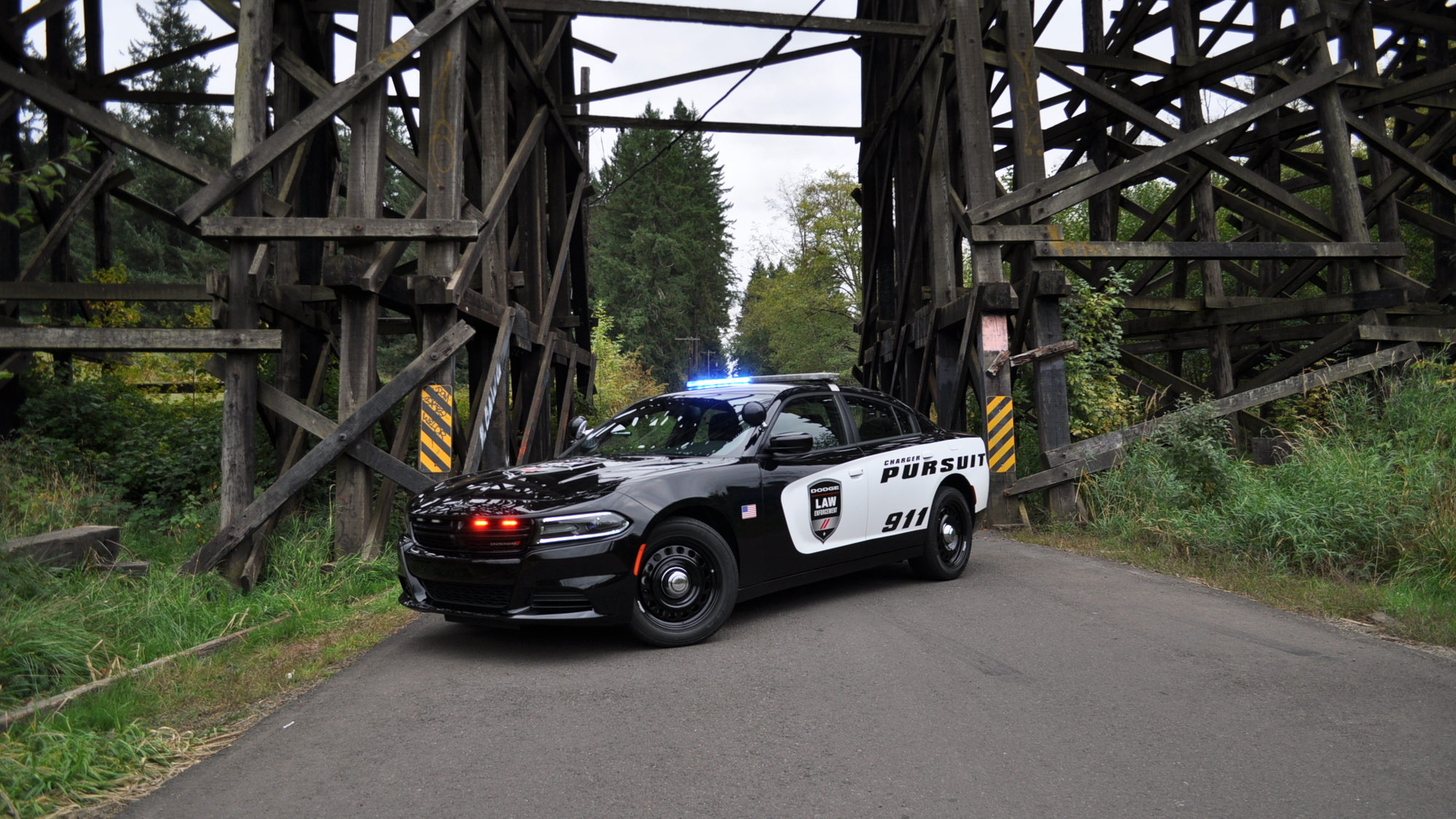 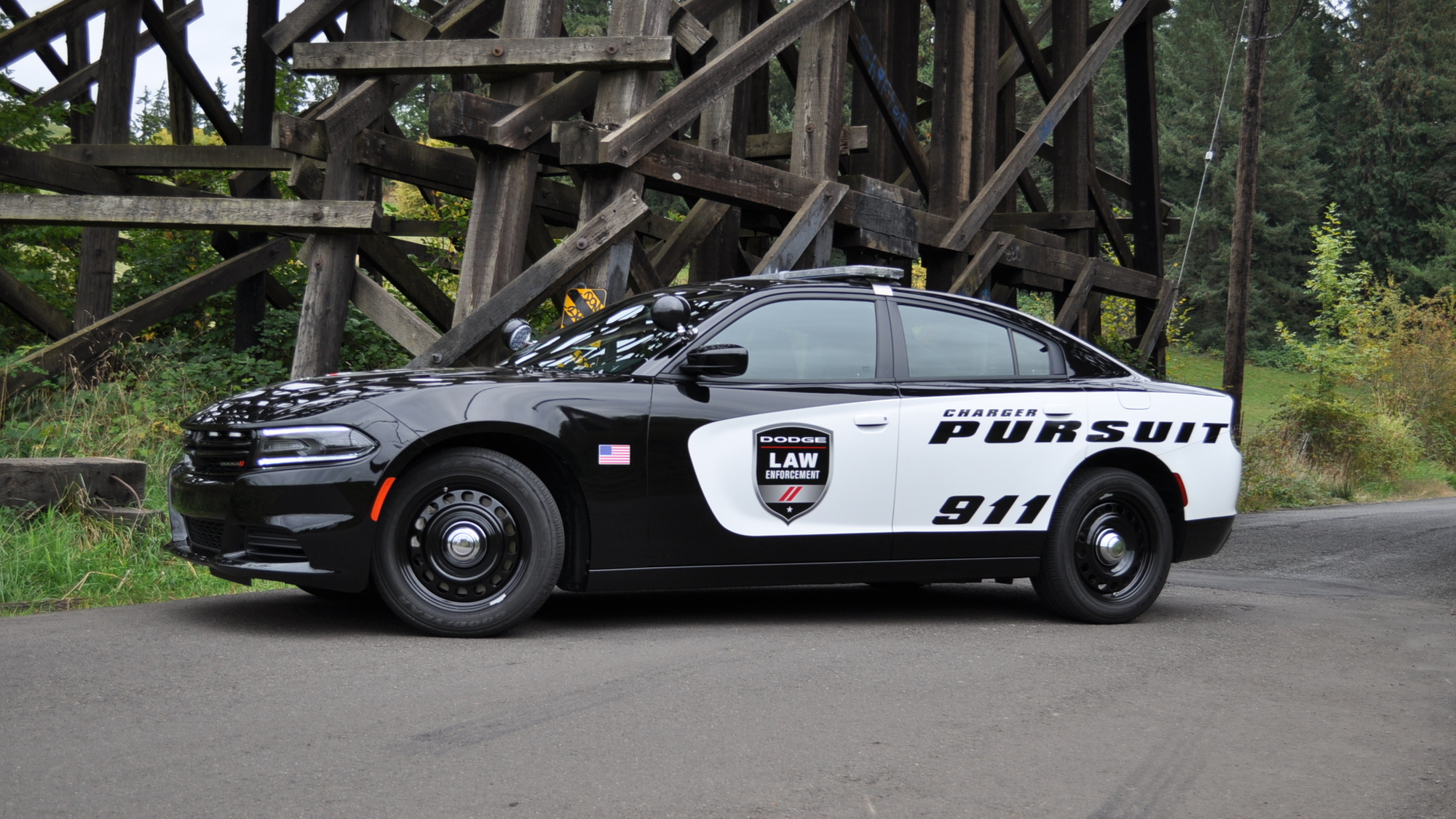 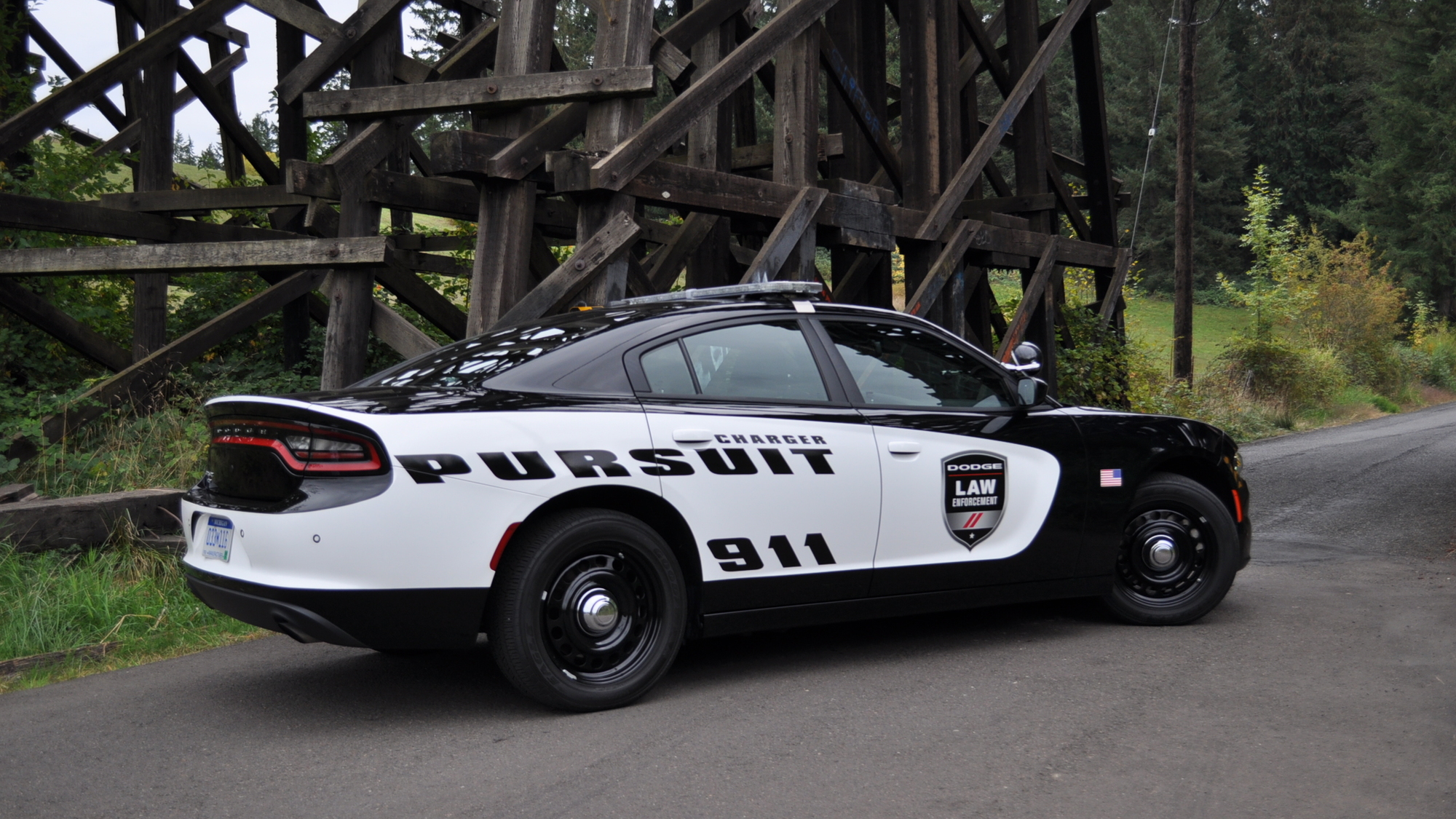 Disclaimer: Kids, it's a federal offense to impersonate an officer. Don't try this at home.

Let's be real: The 13-year-old me squealed and giggled a bit when I was handed the keys to a 2015 Dodge Charger Pursuit. Oh, the amount of trouble I could get in—and how quickly I could land myself in jail.

To say I restrained myself would be putting it mildly. And even then, my neighbors didn't think my jokes were funny.

Yes, Dodge did give me a 2015 Charger Pursuit for a long weekend—a real cop car...sort of. To most people it looked like a cop car, because, well it looks the part. It had a full sticker package, lights, sirens, the works.

That's probably a good thing because impersonating an officer is a federal offense, and I'm not sure how well I'd fare in prison.

So, what's it like to drive a cop car?

No one will pass you, almost ever

You would think driving a police car makes you king of the road, right? Only partly true. Logic would tell you that everyone would avoid you and get out of the way, but that isn't the case. I'm sure if you flipped on the lights and sirens things change, quickly; but since that's illegal, I didn't.

In non-pursuit mode people seem to cluster around you. They want to go faster than the speed limit, but they won't dare go faster than the cop right next to them for fear of probably getting pulled over. What ends up happening is they basically pace you, and you get caught in a cluster of vehicles going the same speed.

WATCH: This Is How Expensive It Is To Own A Bugatti Veyron: Video

Except for this one guy. A gentlemen in an Audi SQ5 saw me coming up on him and immediately slowed down, logically thinking I was the police. As I rolled up next to him on the highway he actually took a moment to read the stickers on the car, a first. It was abundantly clear that after reading the stickers he knew I wasn't actually the police, nor was this a real in-service police car.

How did I know? He put the throttle to the floor and blasted away from me as I was already going the posted speed limit.

One of our journalist friends at Car and Driver dared me to blast Anthrax's I Am The Law while driving the Charger Pursuit. Never one to shy away from such an innocent dare, I obliged.

As I passed a school bus full of kids, the kids looked at me like I was crazy. When I passed a fire truck full of firefighters, they waved and gave me the thumbs up. Then I passed two sheriffs, and when they did a double-take, I decided it was time to stop.

It gets terrible fuel economy

When I say bad fuel economy, I mean pretty terrible. It averaged between 10 and 12 mpg in mixed driving according to the on-board trip computer. While no one's going to say the Charger is fuel efficient with a HEMI, that's especially bad. Why? For starters our Charger Pursuit was equipped with a HEMI, five-speed heavy duty automatic transmission, and all-wheel drive.

The all-wheel-drive system adds weight, that five-speed automatic isn't nearly as efficient as the new eight-speeds in the non-pursuit Chargers, and then there's all the equipment. From the metal center tunnel between the driver and passenger in front to the sirens, lights, all the wiring, and the long list of other uprated pursuit ready gear—they all add weight, and much of it taxes the higher-capacity alternator.

I did happen to talk to a real cop, and he told me the last-generation (they don't have the new model in their fleet yet) with all-wheel drive, the HEMI engine, and the full police package averages about 8 mpg. So, in reality it seems my 10-12 mpg wasn't too shabby. Granted, we didn't have a computer, guns, or rear containment package, this time.

The Take Down button is a massive letdown

As you look at all the buttons for the sirens and lights, one stands out. I nearly giggled as I spotted the Take Down button. This button, it must be the one. It must be what you push when the Gates of Hell are opening, right? It'll activate every single thing because we are about to take down a bad guy!

DON'T MISS: LaFerrari Crashes Into Row Of Parked Cars In Hungary--Updated With Video

Sorry folks, that button is a disappointment. Pushing it turns on the white LEDs on the front of the roof-mounted light bar. Essentially its purpose is to light what's in front of you so you can see what you're "taking down." Yes, I was just as disappointed as you, trust me.

It's got a cop motor, cop tires, cop suspension, and cop shocks

All of that makes it awesome, but it also makes it heavy. Basically, every single thing on this powertrain is the "heavy duty" version as it needs to withstand a very hard life. As such, it's heavy, and boy does it drive like it. People make fun of the Dodge Charger for being heavy, but the reality is it doesn't drive nearly as heavy as the same car in pursuit configuration. From taking a corner to simply taking off from a stoplight, you feel the weight.

People at Krispy Kreme stare at you, with good reason

Of course I made a donut run—who wouldn't? Four dozen donuts boxed up, the lesson learned: If a cop rolls up to a donut place, no one's going to give them a second look.

Apparently, if someone who's clearly not a cop rolls up to a donut shop in a cop car, people start to wonder. Interestingly, only one person was brave enough to come up to me and ask what exactly what going on. Everyone else, well, they just stared at me when they thought I wasn't looking. I saw you.