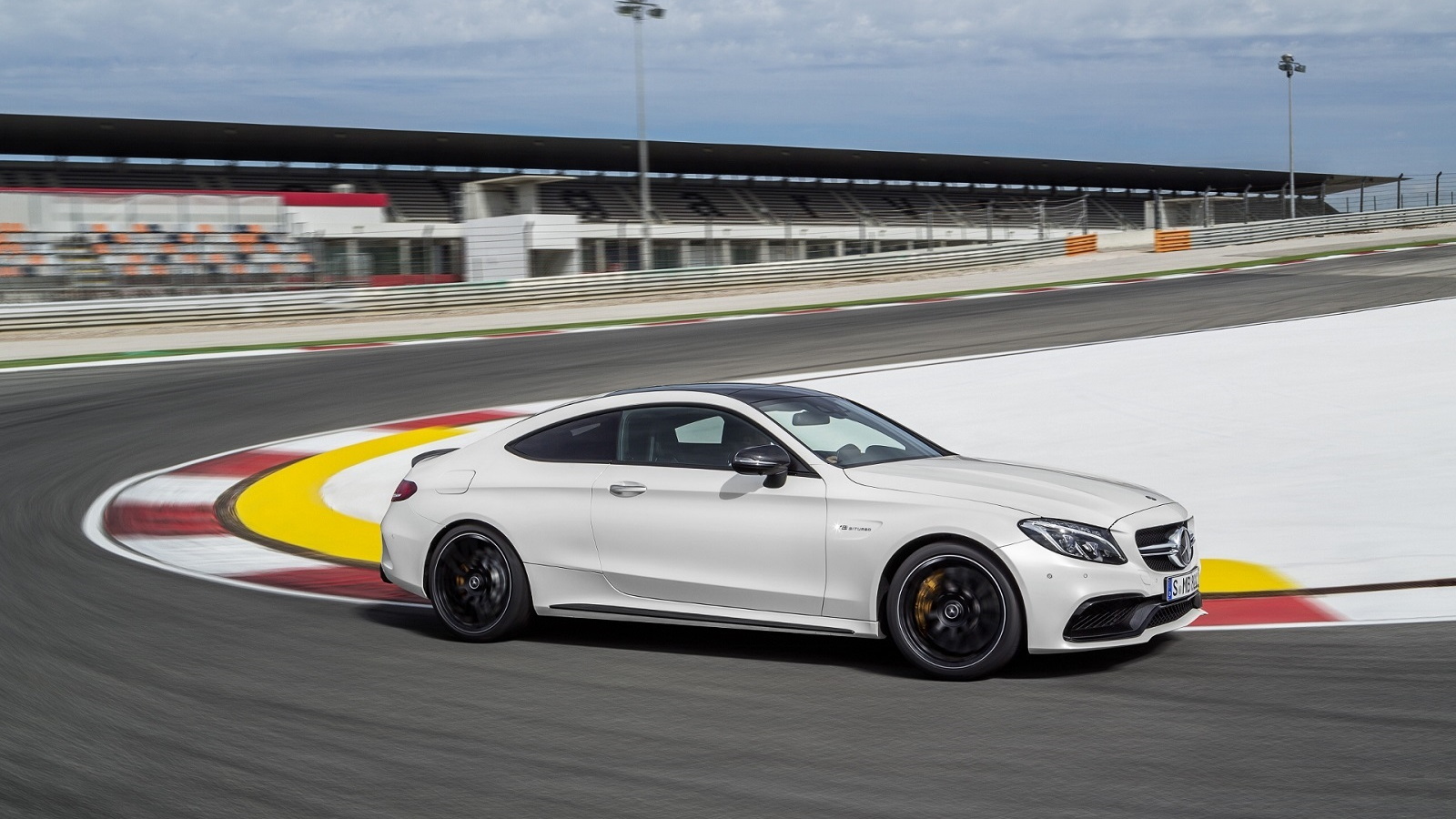 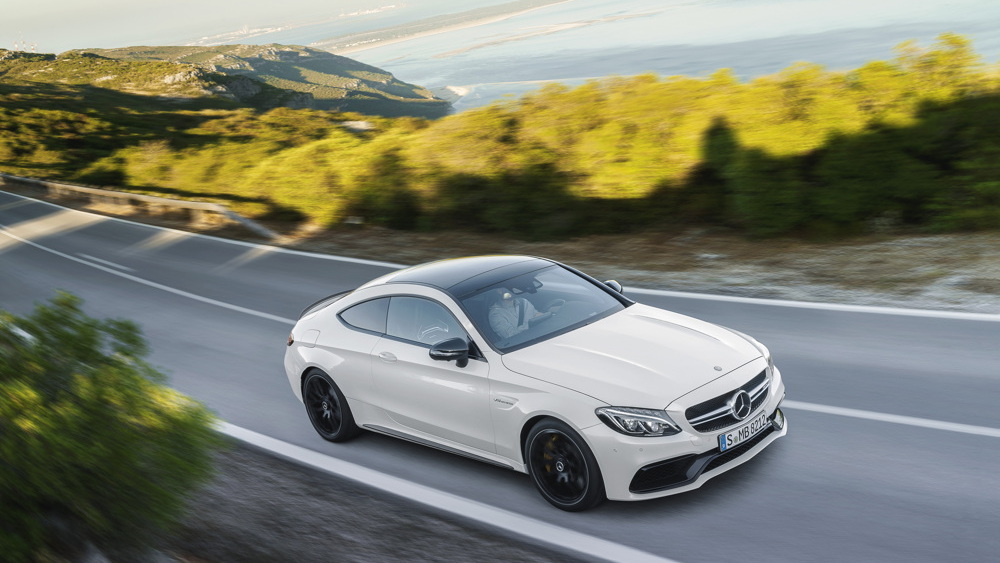 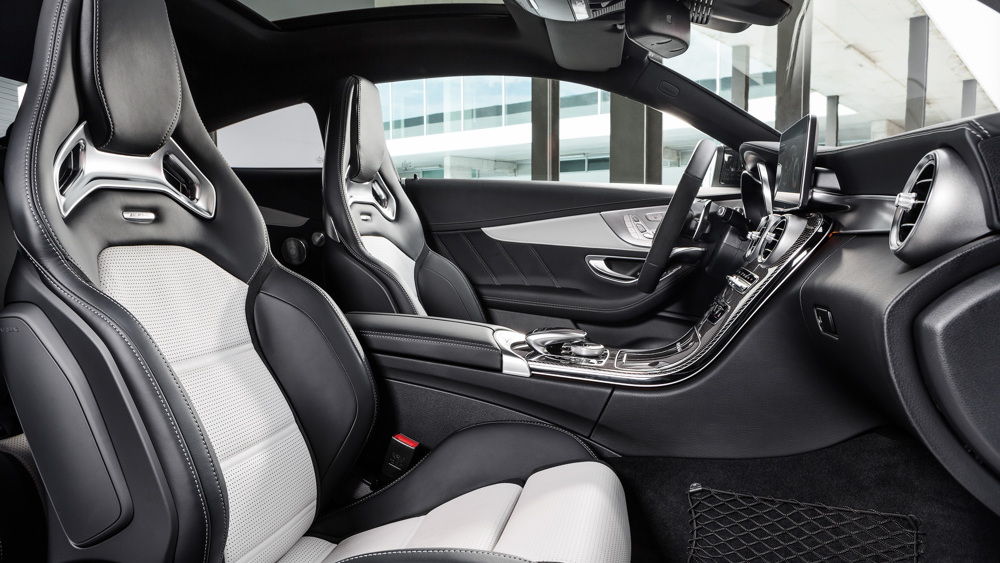 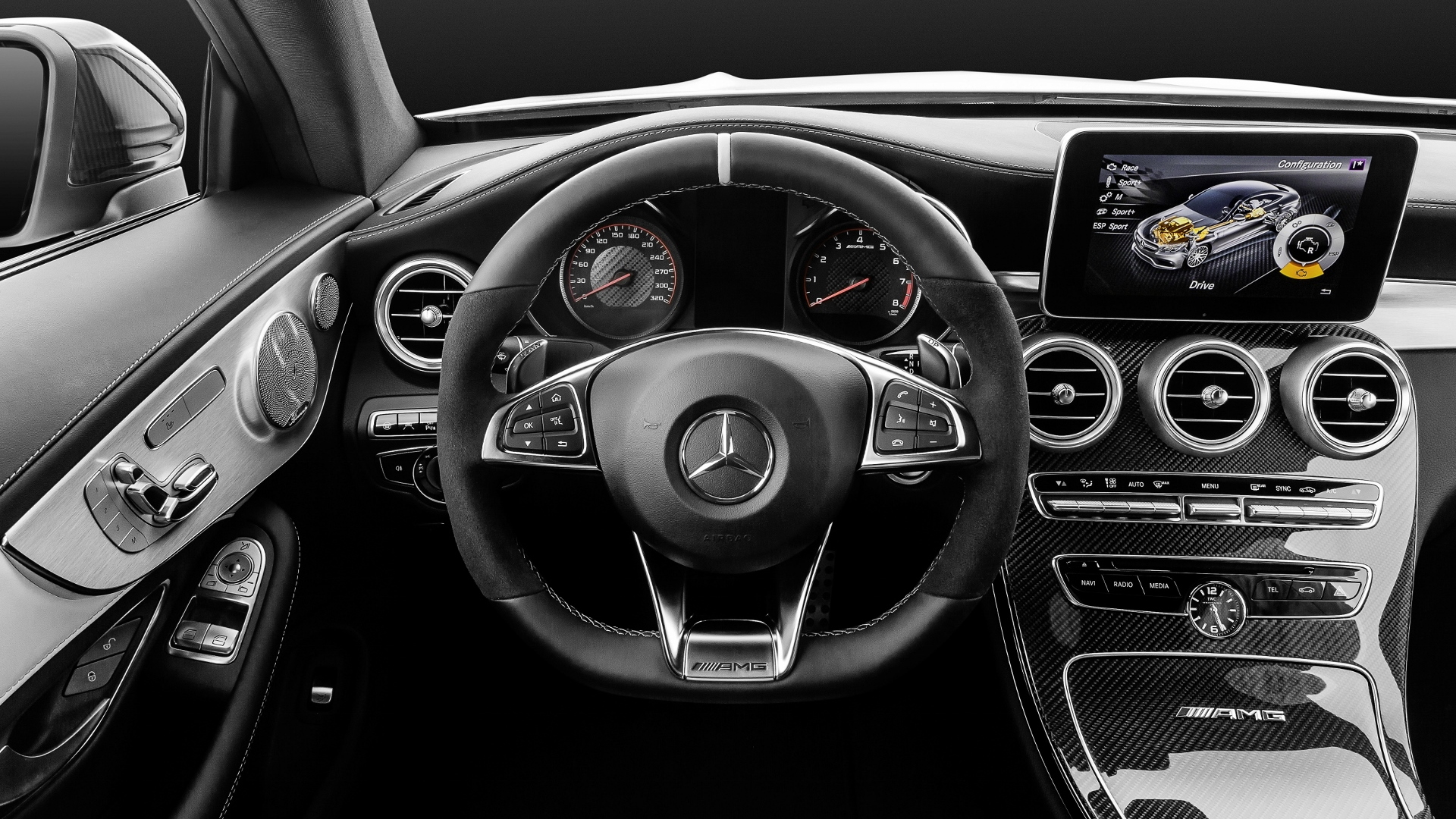 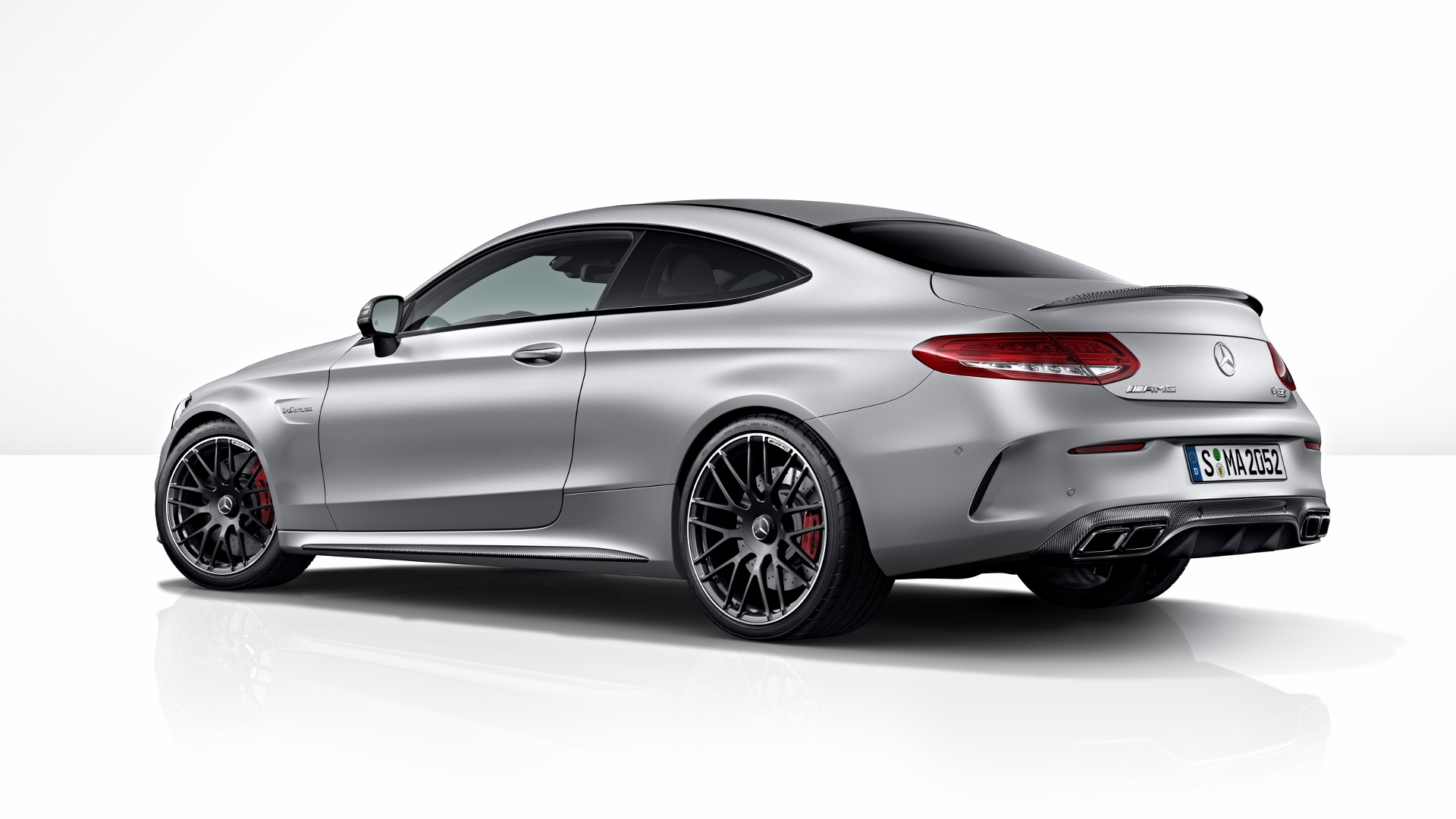 The Ascari Race Resort is a European country club for those who like to drive fast rather than golf. Situated in Malaga, Spain, near the Mediterranean Sea, it’s a playland for well-heeled Europeans to flog exotic machines, bask in the sun, and be pampered by the resort’s staff.

Top Gear fans will recognize Ascari from the 2007 episode in which we met the Stig’s bikini-clad wife and watched the guys compare the Mercedes-Benz C63 AMG with the BMW M3 and the Audi RS 4. In the hands of the Stig, the C63 barely edged out the RS 4 but lost out to the M3 by five seconds in timed laps around the track. The Mercedes had more power than the BMW, but proved unwieldy at the limit, its lack of precision causing oversteer and understeer while the BMW hunkered down to dispatch corners with ease.

Fast forward eight years and we have a new-generation C63. The sedan came out earlier this year and the coupe is due next spring. We were lucky enough to get a preview test drive as Mercedes-AMG flew journalists to Spain to experience its new C63 S Coupe at Ascari and on the roads near Europe’s most southern point.

C63: The Next Generation

The new C63 benefits from the updates made to the base car, namely, a strong new structure and an order of magnitude greater refinement. With competitors like the BMW M4, the brilliant Cadillac ATS-V, and the Lexus RC F—all of which are new in the past year or so—the new C63 needs strong roots to be a viable competitor.

Under the hood lurks the biggest kid on the block. While BMW has switched to a twin-turbocharged 3.0-liter inline six-cylinder, and Cadillac has chosen a twin-turbo V-6, the C63 features a twin-turbocharged (bi-turbo in Mercedes speak) 4.0-liter V-8 with both turbochargers in the "hot inside V" between the cylinder heads. The base version cranks out 469 horsepower and 479 pound-feet of torque. The C63 S turns up the wick to 503 horsepower and 516 pound-feet of torque.

The transmission is no slouch, either. It’s a seven-speed automatic gearbox that can be shifted manually via a pair of steering wheel paddles.

The AMG team decided that the coupe should be sportier than the already adept C63 sedan. To accomplish that goal, AMG gave the coupe a wider track front and rear, bigger tires, and a completely different rear end. The tires are 10 mm wider up front and 20 mm wider in the rear. The rear axle has a different geometry, a 50 mm wider track, and more negative camber; it also uses uni-ball steel bushings instead of rubber bushings. The S model also gets an electronic limited-slip differential, while the base version features a mechanical version.

Like the C63, both AMG coupes also come with AMG Ride Control adjustable dampers with sport and comfort settings, as well as dynamic engine mounts that stiffen to improve agility and loosen to improve noise, vibration, and harshness.

On paper, the C63 S’s 4.0-liter V-8 is the strongest in the class, and it should be. It has two cylinders and at least 0.4-liter of displacement on its competitors. However, it doesn’t run as much boost as its six-cylinder rivals and at 3803 pounds, the C63 S is more than 300 pounds heavier than the BMW. Mercedes-AMG reports 0 to 60 mph times of 3.9 seconds for the C63 and 3.8 for the C63 S. Those times are right in line with the BMW and Cadillac, so while this engine may be stronger, it doesn’t deliver any more on-road performance. The top speeds are electronically limited to 155 mph for the C63 and 180 mph for the C63 S.

However, it’s still my favorite of the bunch, and the reason is its beautiful voice. A V-8 should sound angry and ominous, and despite the muffling effect of a pair of turbochargers, AMG has made this engine sound downright nasty. It emits a rumbling baritone most of the time, and lets out a blat between shifts when driven hard. AMG even offers an optional Performance exhaust that opens extra baffles to make the sound meaner at the push of a button. In a sport coupe like this, the sound is part of the visceral experience that makes it so fun.

Of course, dirty, nasty acceleration is the other side to that formula and the 4.0 delivers in that regard as well. Toddle along with the AMG Dynamic Select system in Comfort mode and the engine and transmission are somewhat neutered. Between turbo lag, throttle mapping, and gear selection, there is a bit of a pause before power delivery, though it really perks up when you get your foot into it. Choose Sport, Sport +, or Race mode, however, and the engine snaps to attention like an eager-to-please corporal, providing willing thrust and lots of it. Power is pretty much immediate, thanks to a torque curve that delivers its maximum output from 1750 to 4500 rpm. Your only decision will be how aggressive you want the transmission. Sport mode strikes a nice balance of alertness and everyday drivability. Sport + and Race are best left for canyon roads or track days, as they deliver quick, crisp shifts and keep the power on boil. That can grow tiresome in everyday traffic.

That said, enthusiasts will miss the naturally aspirated 6.2-liter V-8 from the last-generation C63. Now relegated to legendary status, that engine offered immediate throttle response and linear power delivery with a wallop. While this engine is just as powerful, it’s more refined and therefore doesn’t deliver quite as much crazy, stupid fun.

Speaking of crazy, stupid fun, that’s the perfect description for Ascari’s 26-turn, 3.4-mile course. With various sections of the track judiciously “borrowed” from some of the best tracks in the world, it’s a twisty, technical course, with lots of on- and off-camber turns and it’s a blast in the right car.

The C63 S is the right car. While the car the Stig drove eight years ago was a lumbering hammer, this car is more of a precision instrument. The balance is very neutral, so it acts the way you treat it. Charge too hard into a corner and it will understeer. Kick the throttle midturn, and you risk going for a loop.  The car turns in quickly, maintains a steady line, and rotates well. The eLSD helps it put the power down when exiting a turn (as well as during launch), but doesn’t offer the torque vectoring that you get with the Lexus RC F’s optional dif, so the C63 isn’t quite as nimble as the heavier Lexus through corners.

The electric-assist power steering is fairly quick and direct and it has some nice heft, but it lacks the road feel you’d want in a sport coupe. The Michelin Pilot Super Sport tires, 255/35R19 up front and 285/30R20 in the rear on the C63 S (the C63 gets 19s all around) have plenty of contact patch and provide good grip, but their compound isn’t as sticky as the same tires on the Cadillac ATS-V. That’s both a blessing and a curse. It might mean a slightly longer lap time, but it also makes it easy to slide the car around with a big, goofy smile on your face.

For track purposes, it’s important to not only set the Dynamic Select system to Race mode but also make sure the electronic stability control is in the Sport Handling or Off modes. Even with the AMG Dynamic Selector in Race mode, the ESP kept interfering and cutting power in the base On position. Sport Handling let me slide around a bit and kick the tail out in a couple turns without intervening.

The C63’s talents translate to the street as well. Perhaps its greatest strength is a fairly supple ride quality that makes it easy to live with every day. The ATS-V is similarly smooth due it its magnetic ride control suspension, but the BMW has become a bit too firm, especially in its Sport and Sport + modes. If you want a car that you can drive all week long on your commute, then attack corners on the backroads or a local racetrack, the C63 S fits the bill.

Aside from Audi, Mercedes-Benz is building today’s best interiors. Like the C300, the C63 features a refined cabin with top-notch materials, only this one is even better thanks to carbon fiber trim and supportive sport seats. Most of our seat time came in the optional performance seats, which have the bolstering to keep you in place during hard cornering but lack some back support for best comfort. I’d probably just stick with the base sport seats.

Eight years after that Top Gear test, I’d like to see another similar comparison, this time pitting the new C63 S coupe against the M4 and the ATS-V. While the M4 is indeed faster than the last M3, it’s beginning to show some chinks in the armor. The engine note is best described as dull and the ride can be harsh. In the meantime, Cadillac has entered the fray with a wonderful car and the C63 has become more of a scalpel than a hammer. I’d venture to say that this C63 may beat the M4 around the track, and the ATS-V would be right in the mix as well. The Mercedes still makes great sounds, too, and it’s ride is probably better than that of the BMW. That’s not to knock the Bimmer. It just shows how far the AMG has come. Oh, what wonderful times are these.