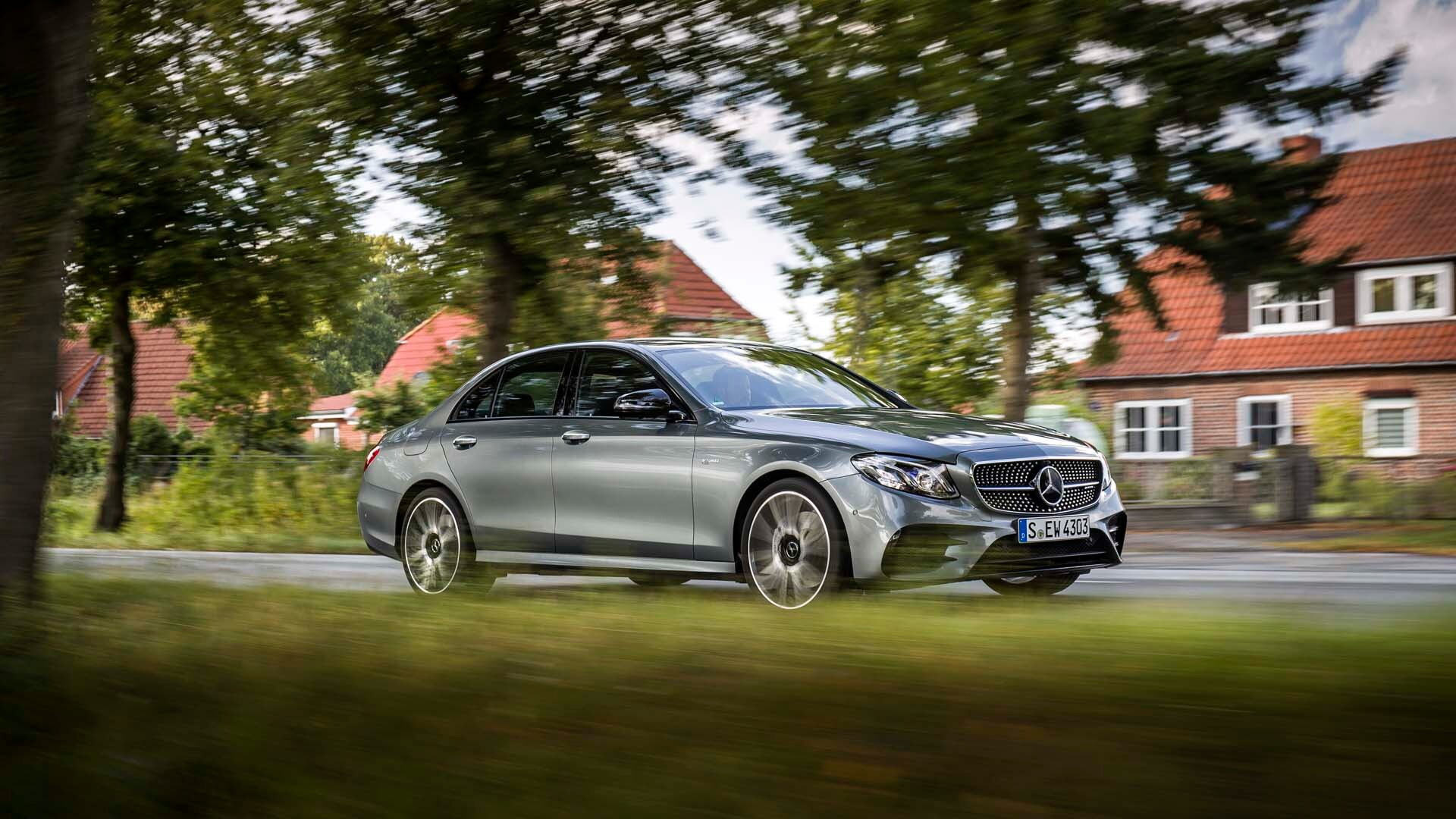 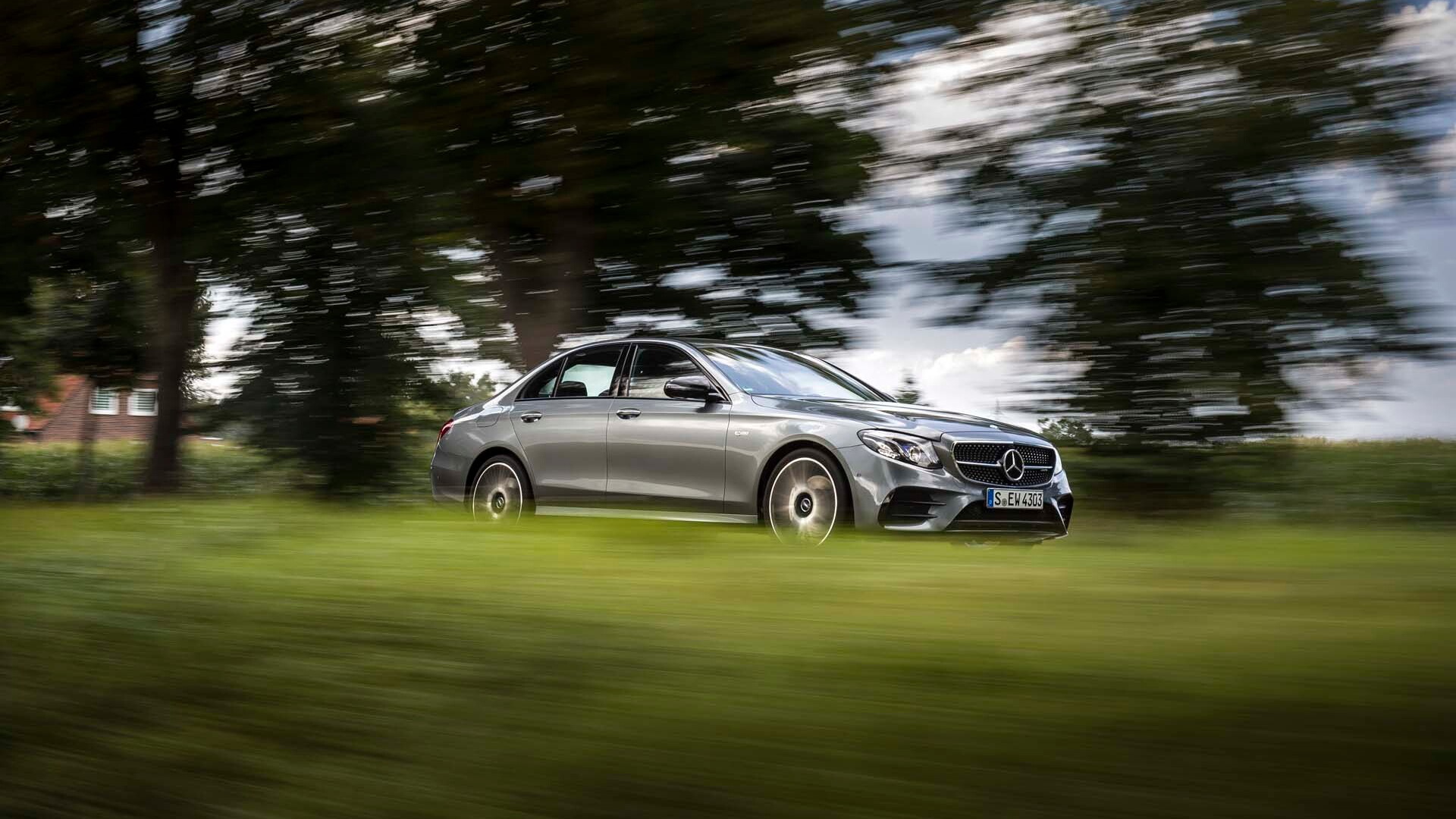 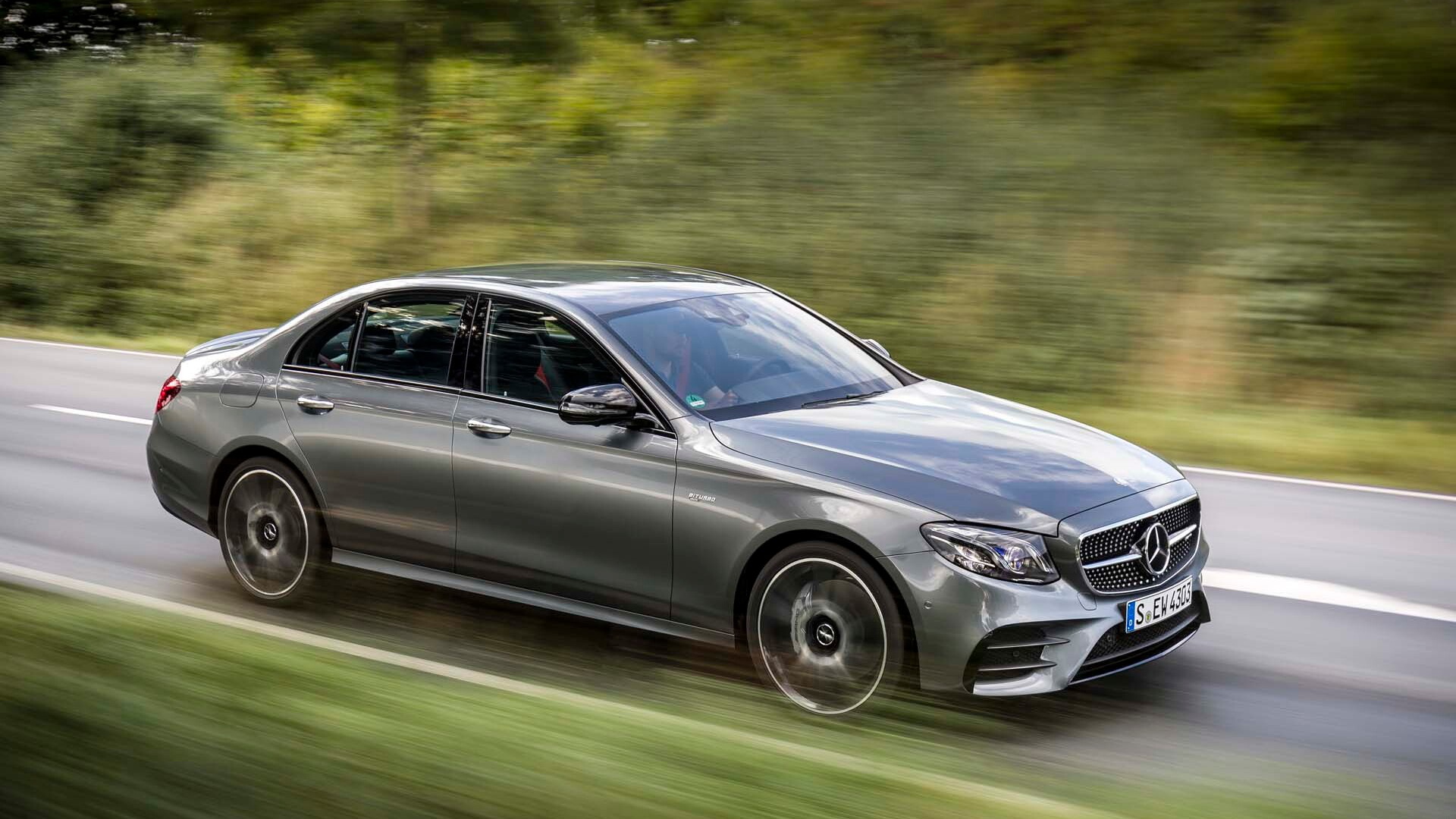 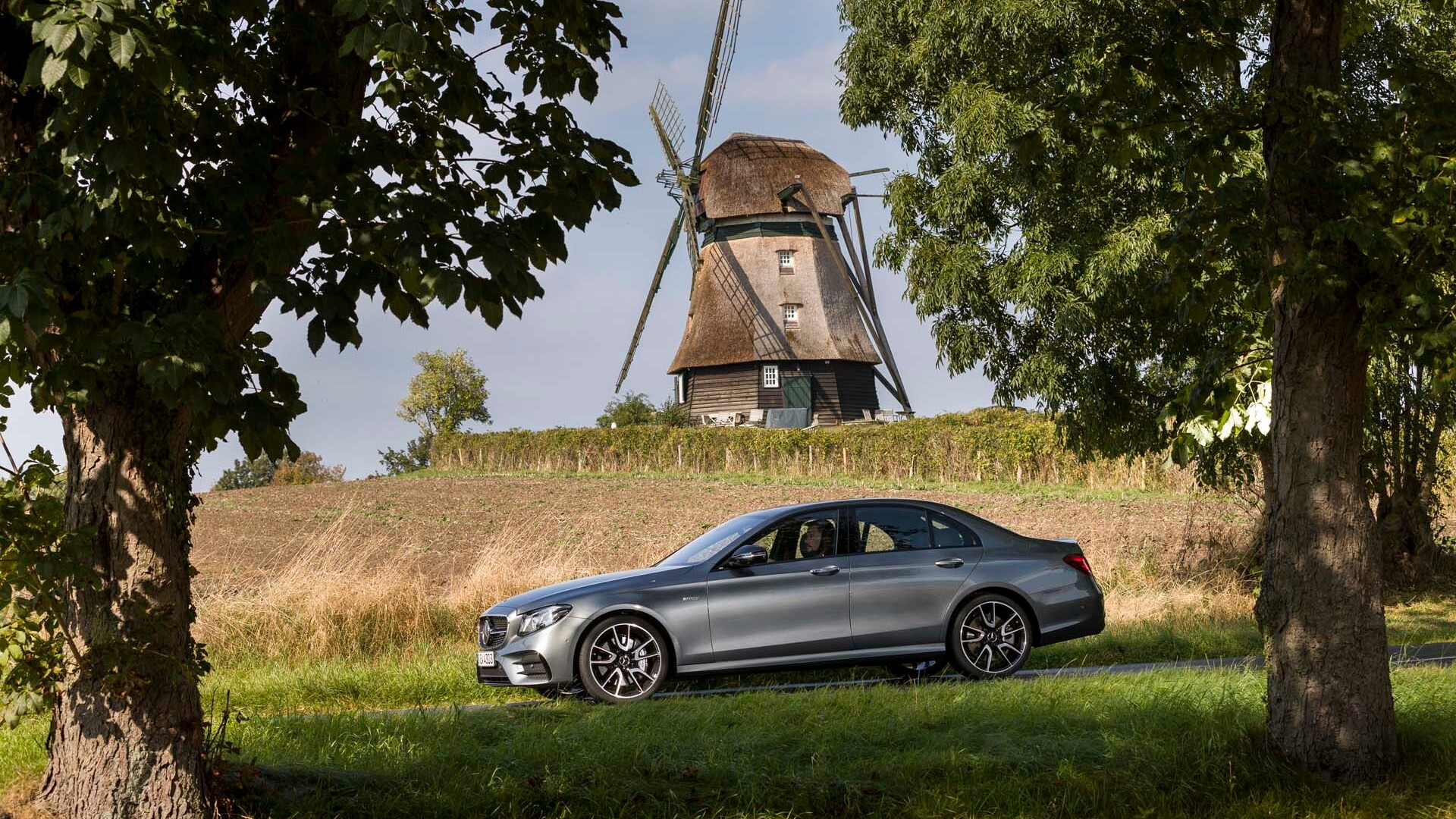 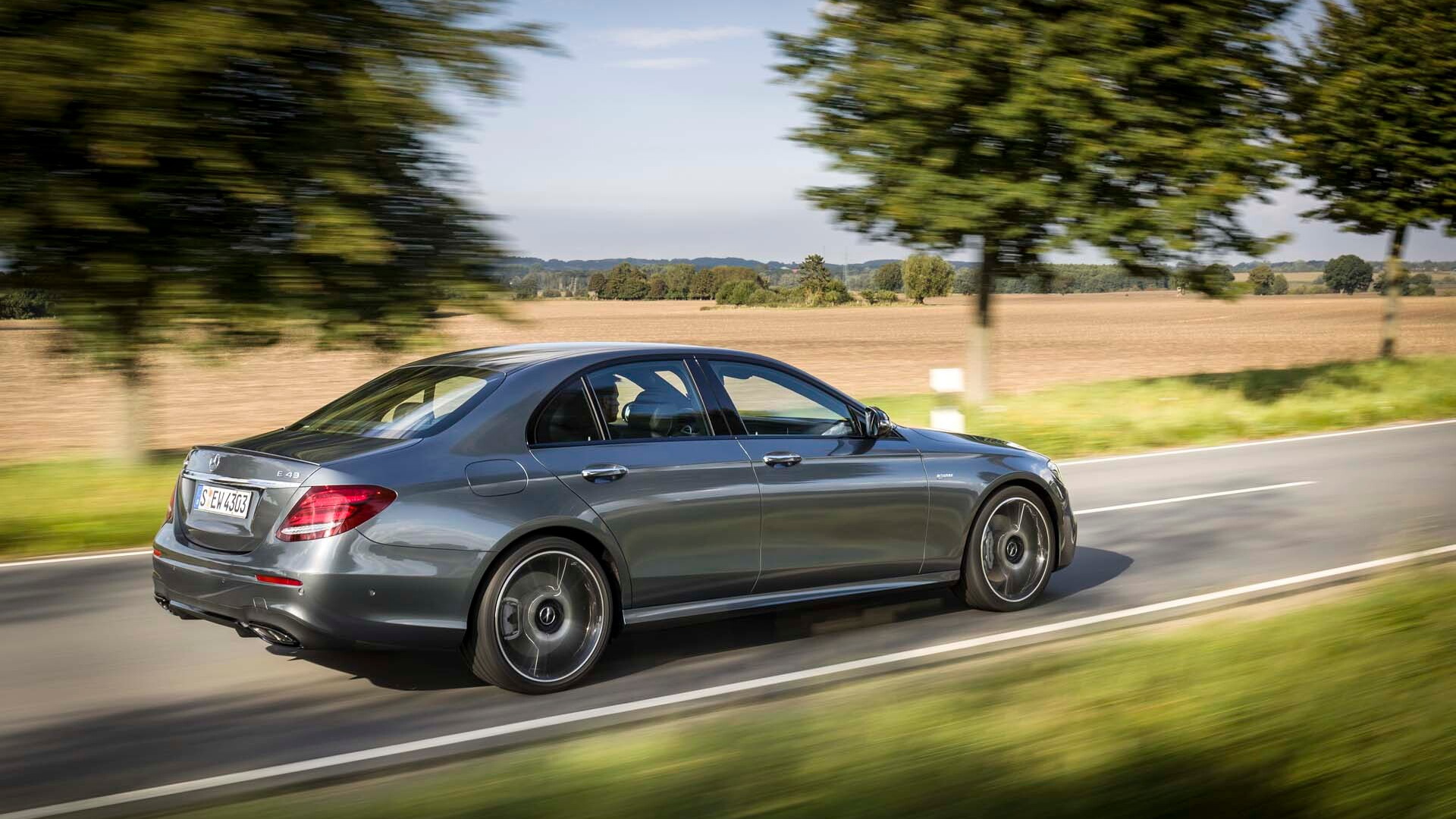 Big Gulps. Animal Style. Smothered, covered, chopped, and chunked. America's shameless and torrid affair with the over-the-top isn't limited to food. When it comes to luxury and performance cars, we like them big and brawny, too. Alpha-numeric sequences like CTS-V and E63 and M5 activate overworked salivary glands as quickly as a whiff of TurDucKen. Which makes Mercedes-Benz's new 2017 AMG E43 sedan an interesting bet, because it's a lot like a juicy burger—with a side salad.

Everyone loves french fries, but most waistlines do not. Beefy goodness is one thing, but there are limits, realities that come with adulthood. The Mercedes-AMG E43 understands this implicitly, balancing the saturated fat joys of the AMG E63 with the enlightened refinement of the standard E-Class sedan.

With a fixed 39:61 front:rear torque distribution through its all-wheel drive system, and 396 hp and 384 lb-ft of torque from its twin-turbocharged, 3.0-liter AMG-tuned V-6 engine, the 2017 Mercedes-AMG E43 is quick, hitting 60 mph in a claimed 4.5 seconds. The E43 surges forward under throttle, easily outpacing the standard 2017 E-Class sedan, but not quite leaping like the E63s do, with their 577-hp V-8s hurling them to 60 mph in just 3.6 seconds. Nevertheless, paired with the nine-speed 9G-Tronic paddle-shift automatic transmission, the E43 is never caught out wanting for power or torque, and shifts are smooth and seamless—except when you don't want them to be.

The automatic transmission's behavior, along with throttle response, electric power steering effort, and multi-chamber air suspension tune, can all be adjusted with a toggle of the AMG Dynamic Select lever, with modes including Eco, Comfort, Sport, Sport+ and Individual. Eco and Comfort modes are great for the daily grind—Eco mode even disengages the engine from the transmission and allows the car to coast when the driver lifts off the throttle at speeds between 37 and 99 mph, saving a little fuel in the process. It's the other three modes that drivers seeking the sharper edge of the E43 over the standard E300 Sedan or E400 Wagon will want to investigate. Sport mode is a mild change from the default Comfort settings: throttle and steering become snappier, gearshifts a bit more abrupt, suspension firmer. Sport+ takes everything up several notches, most noticeably in the transmission shift algorithm.

Instead of the buttery, almost unnoticeable shifts you'll find even in spirited driving in the other modes, Sport+ brings a much more jarring shift feel—and it's baked in on purpose, according to Michael Kelz, chief engineer for the E-Class. The 9G-Tronic transmission is more than up to the task of handling the 3.0-liter V-6's torque, even with AMG's enhancements, says Kelz. The jarring shifts of Sport+ are just the way the engineers tuned the transmission to behave, presumably to emphasize some conception of "sportiness." If you can live with the unsettling shift quality, Sport+ also adds some rather intelligent auto-blipping downshifts when entering a corner on the brakes and holds gears well when negotiating transitional stretches. Of course the system can always be put into manual mode via the center console-mounted button, ensuring the transmission does not upshift until you tell it to. During my time hustling the E43 along winding back roads near Hamburg, Germany, and along unrestricted stretches of the Autobahn, I found Sport mode to be the ideal mode for the drivetrain, balancing quick, responsive shifts from the paddles without the sharp, often weight-transferring shifts of Sport+ mode.

While Sport mode was ideal for the drivetrain, due to a quirk of the electronic power steering system, Comfort mode is actually somewhat preferable for more precise work. Why? Because the E43's steering system has a somewhat bizarre centering force, again baked into its design. As the wheel is turned steering force ramps up quickly as it nears the 15-degree range, then quickly falls off again; on its own, that's not too annoying. When unwinding the wheel, however, that same force draws the wheel back to center, resulting in more steering input than desired, unsettling the car's balance. It can be anticipated and corrected for by the driver, but this odd tuning is definitely fighting against you when you're putting effort into driving the car well.

Fortunately, there's an Individual mode which allows the driver to tune steering feel, drivetrain responsiveness, and suspension settings independently of each other, selecting from each of the four primary modes for any setting. With the drivetrain in Sport, steering in Comfort, all that's left for the Goldilocks AMG Dynamic Select setup is to pick Sport for the suspension, and you're driving one of the most well-tuned sport sedans on the road. The differences in ride quality are not huge, even from Comfort to Sport+, but they are perceptible. In general, the E43's ride quality is firm, but comfortable, though the extra stiffness added to the front and rear subframes does transmit more noise into the cabin than that of the non-AMG E-Class.

As smart as the performance side of the new Mercedes-AMG E43 is, it has all of the brains of the standard E-Class, too, including its available advanced driver aids. Between lane-keeping, automatic cruise control, and automated lane changes (just move the turn indicator to the side you wish to go, and it figures out the rest), highway driving requires much less driver attention, but it does still require some. Painted lines are fickle, weather is changeable, cameras and sensors are fallible—the human mind is still a key component, it just has a safety net now—and an easy-to-use, mostly effective one, too.

Like its driver assistance tech, Mercedes' design, both interior and exterior, is at the top of its game. The upgrades to the standard E-Class's handsome looks made for the AMG E43 make for a subtly more intense stance. Interior trims of either aluminum or carbon fiber accent solid-feeling switches and large-easy-to-read displays. Package and trim specifics for the American market haven't been announced yet, but the European-spec models we drove look and feel just like we've come to expect modern Mercedes-Benzes from the C-Class to the S-Class—well-built, stylish, and elegant. Active brake assist with pedestrian detection, evasive steering assist, active side-impact seats that move inboard before a crash happens, and much more are also available.

So go ahead, be responsible. Be an adult. Skip the fries. The burger is great.