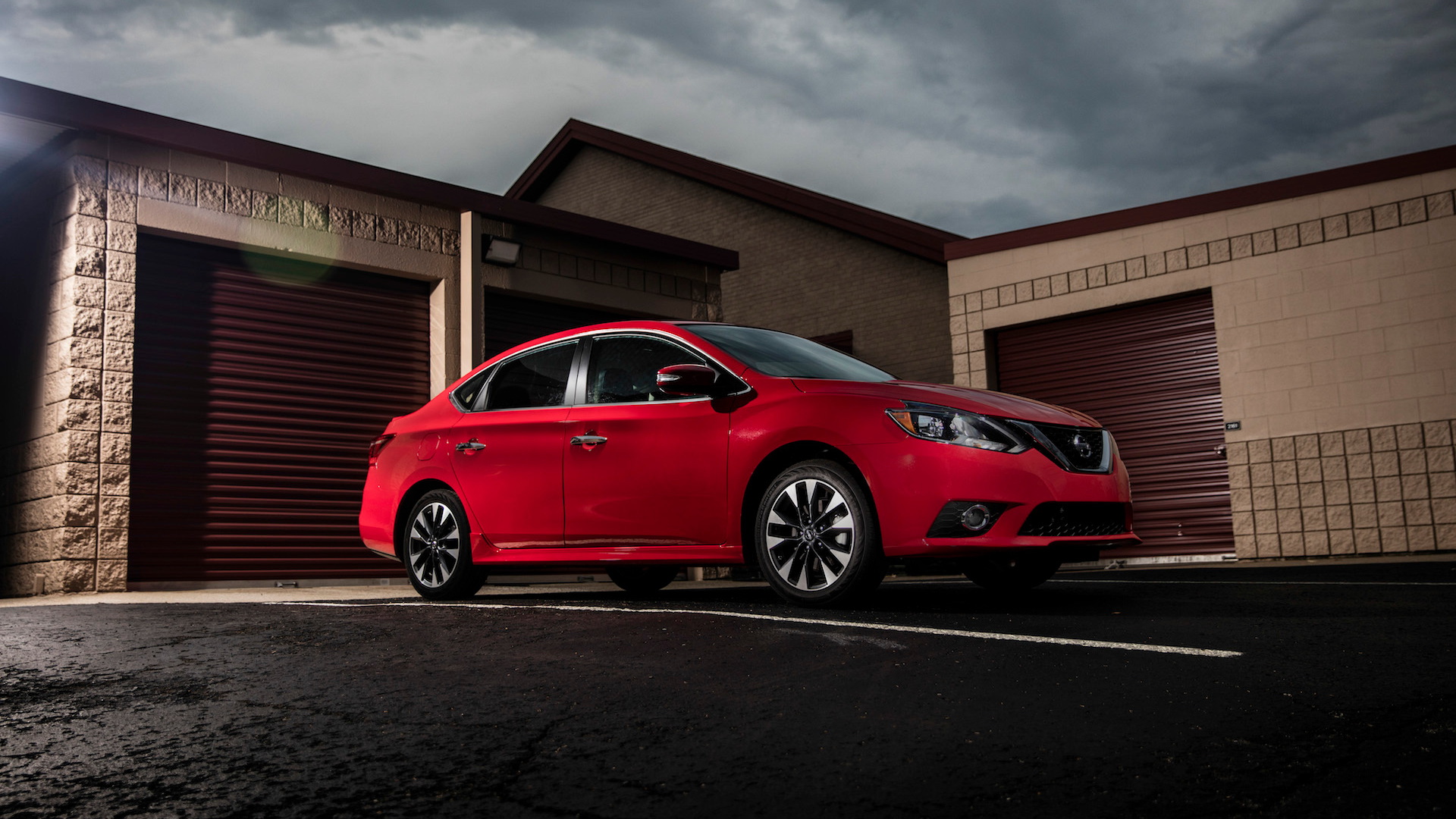 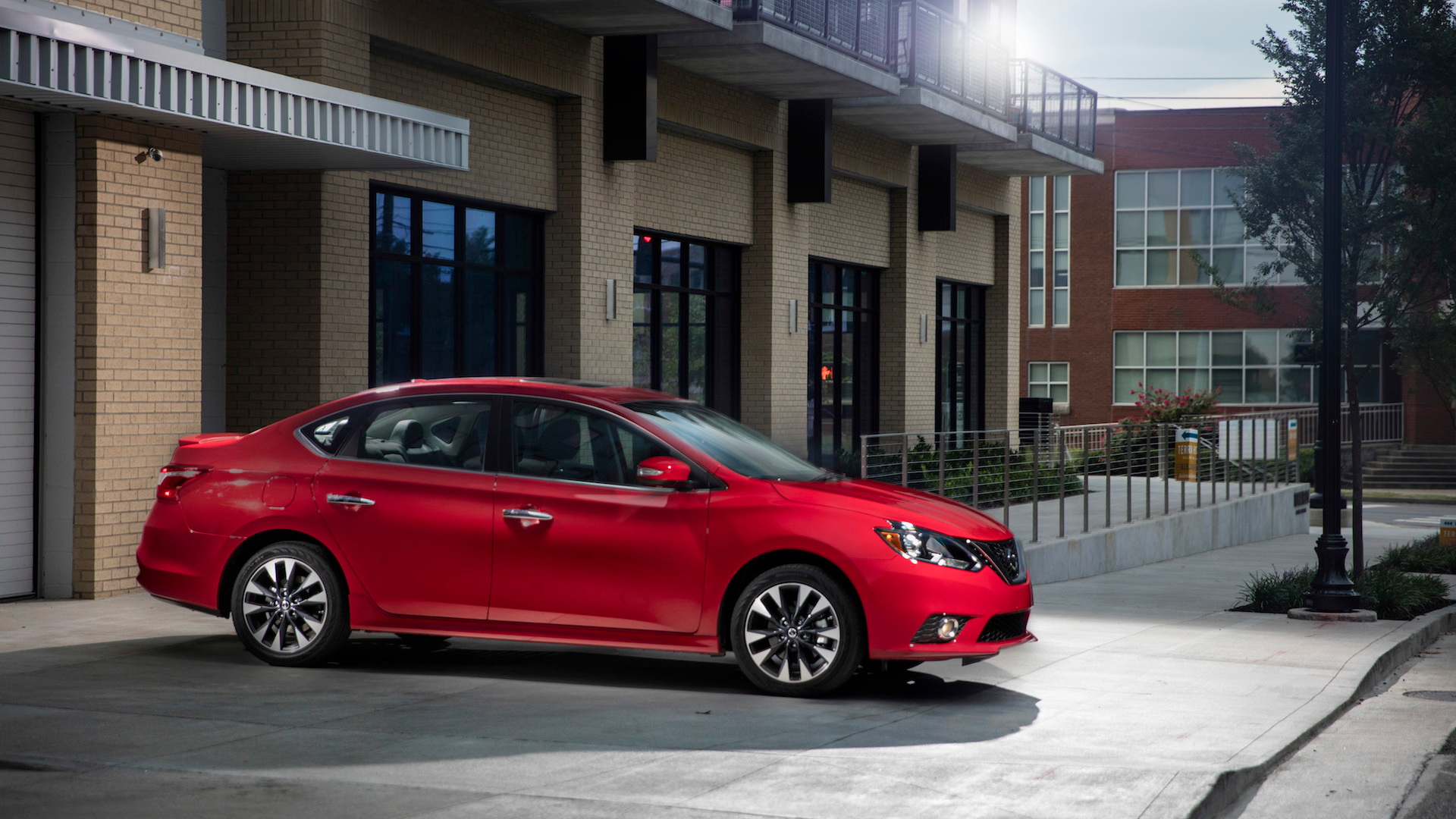 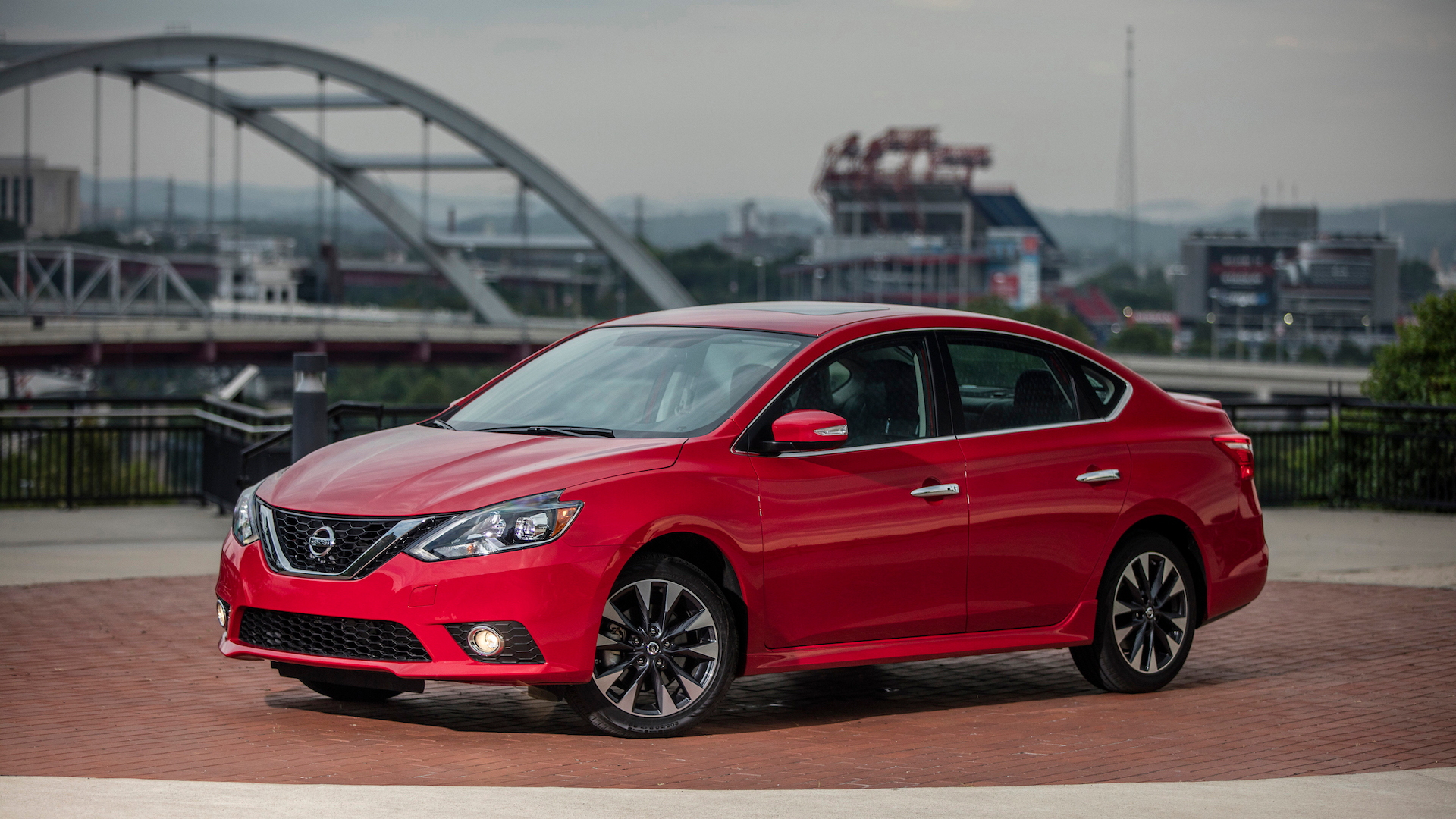 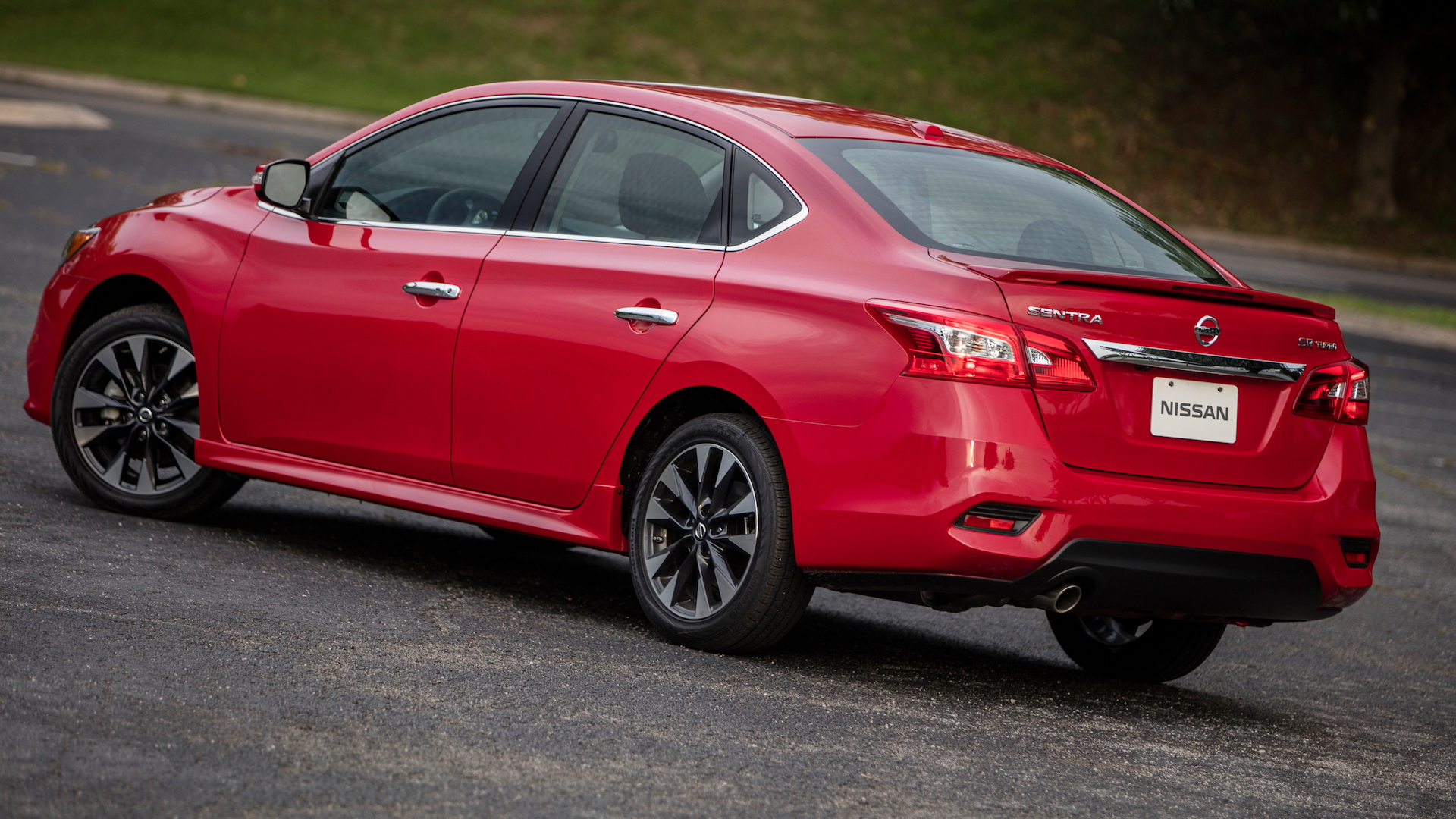 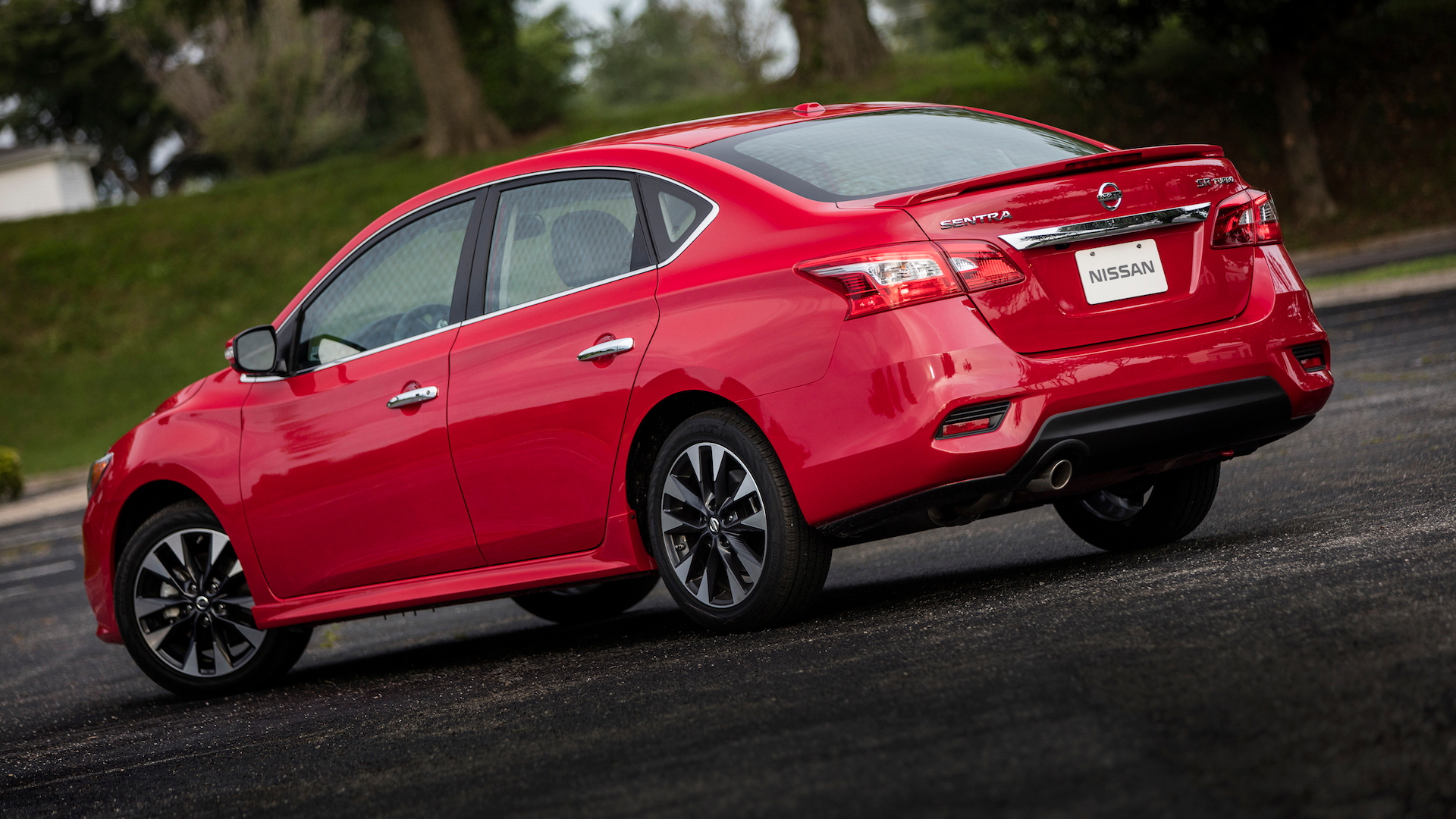 Faulkner famously told us the past isn't dead; it isn't even past. We can't prove it, but we think he had the Nissan Sentra SE-R in mind.

The 1991-1994 SE-R set the cheap-car benchmark for a generation: a flyweight car with feathery controls and a lamprey lock on the pavement. Think ersatz M3 with mouse belts and a chintzy felt headliner and every dram of steering feel missing from every car on the road today.

It was a watershed--and since then it's been an albatross. Now, every car Nissan builds somehow has to live up to its well-earned hype.

Imagine that burden heaped on the folks who drummed up the 2017 Sentra SR Turbo. They've carefully avoided using those same historically charged letters. They're "just" building a better, quicker Sentra.

They're also venturing deeply into Honda CR-Z territory, flirting with the past without hopping into bed with it.

They've fought the urge to add the "E-" back in the name, and you should too.

The Sentra SR Turbo has the heart of a rev-happy warrior. It's on loan from the irascible, inconvenient little Juke, and it's one of Nissan's most tech-intensive engines, with continuously variable valve timing, a fairly high compression ration of 10.5:1, and touches like slick-finished cylinder bores and a variable-pressure oil pump.

Nissan DeBakeys the Juke turbo-4 right in there, and it's an agreeable fit--not only because it pops out 54 more horsepower than the Sentra's stock-and-trade inline-4. It gives the Sentra some of the soul it's lacked for a generation. It flings output to 188 hp, and fling is the proper verb. The engine doesn't reach peak power until it hits 5,600 rpm, and its 177 lb-ft of torque takes some time to hit its marks--but peaky power is an underrated sensation in an era of dead-flat torque plateaus.

The new engine instantly is the most interesting part of the Sentra's mechanical package, and it's good for a mid-7-second 0-60 mph time. Coupled to a long-throw 6-speed manual with a high clutch uptake and five tightly packed lower gears, the SR Turbo spends a lot of its day between 3,000 and 6,000 rpm, where it thrums with the eager insistence of a terrier in search of a lamppost.

The CVT that's fitted to lesser SR Turbos has Nissan's usual pre-programmed ratios, meant to convince noobs there's a real torque-converter automatic at work. You don't go to this dance to stand against the wall.

When it comes to the black art of suspension tuning and steering feel, the Sentra SR Turbo doesn't gamble on a first-class upgrade. It takes the easy comfort-plus route, with a set of stiffer front springs (by 10 percent) and its own shocks, with 23 and 50 percent more damping force applied front and rear. The Turbo also gets its own 17-inch wheel-and-tire combo, on slightly more adventurous Conti ProContact tires.

The stock Sentra electronic power steering rack has been remapped for better response, and the SR Turbo also has slightly larger front brake discs, up to 11.7 inches, for more stopping power.

The recipe's sound, but the Sentra SR Turbo still has some tough challenges in arguing a convincing sport-sedan case. It's a tall car, without the Mazda 3's sense of intimacy with the road, devoid of the steering focus of a Focus, minus the low-slung drama of the latest Civic. Toss it into a corner abruptly, and the torsion-beam rear takes a pause before a set, the steering thickens with friction but doesn't reveal any nuances of road surface.

The flip side to that is the Sentra SR Turbo delivers on a quiet, nicely damped ride. It's only moderately firm, and its tires strike a good compromise between grip and compliance.

Against those comers, the Sentra SR Turbo also out-spaces its pack. Head room is expansive in front, and the long, tall roof and short overhangs free up a lot of space in front. A real, live adult can sit in back. Regular cockpit improvements have rendered the dash in soft, pleasant plastics.

Affordable at $22,825, the Sentra SR Turbo has stick Mazdas and manual-turbo Civics to contend with. It does so with a flourish of standard equipment, including sport seats; LED accent lighting; a power sunroof; a rearview camera; pushbutton start; power features; and an AM/FM/CD/XM head unit with Bluetooth and audio streaming.

A Premium option package gains leather seats; Bose audio; and blind-spot monitors. Navigation is an option. Off the menu: a wide-screen nav system, adaptive safety features, anything but a sedan body style.

The SE-R didn't have all of that stuff, either. The world has moved on from the days of 2,500-pounders with hydraulic steering and two-door notchback rooflines. In spirit, the SR Turbo is an incremental step back in the right direction.

Still, we can't help but think of those songs played on TV, their melodies carefully transposed to avoid copyright infringement. We recognize the tune all right, but the song just isn't the same.