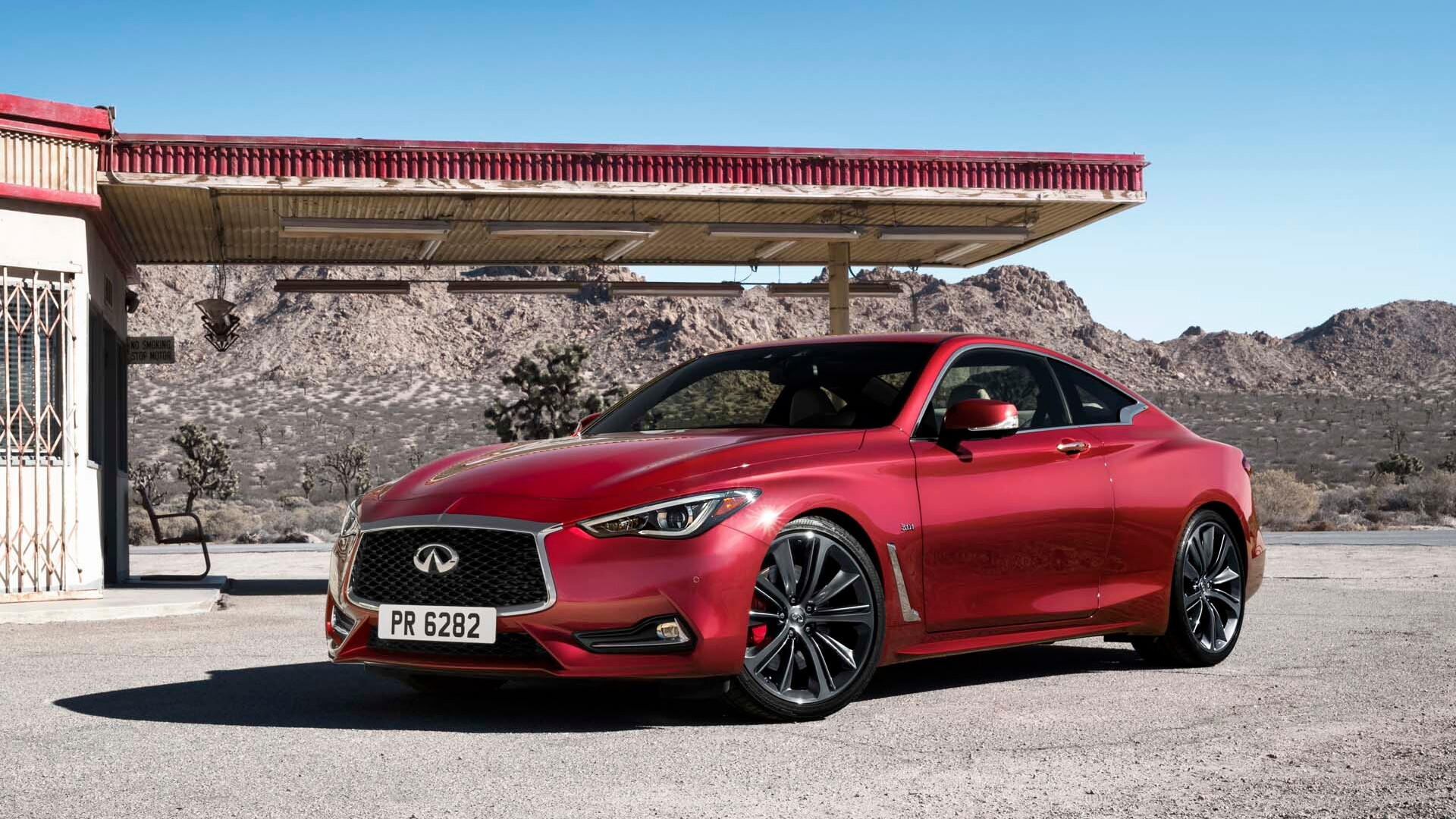 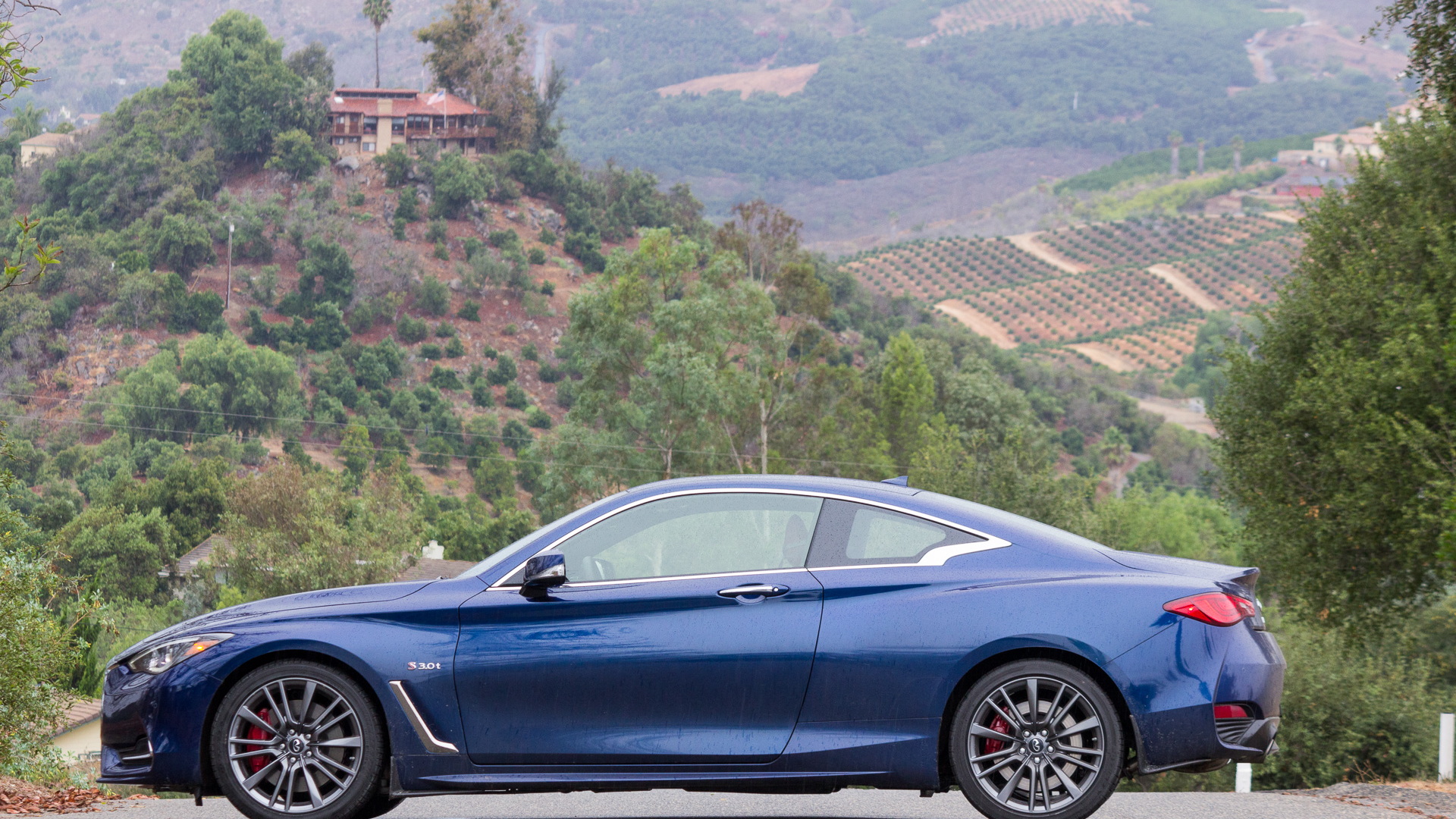 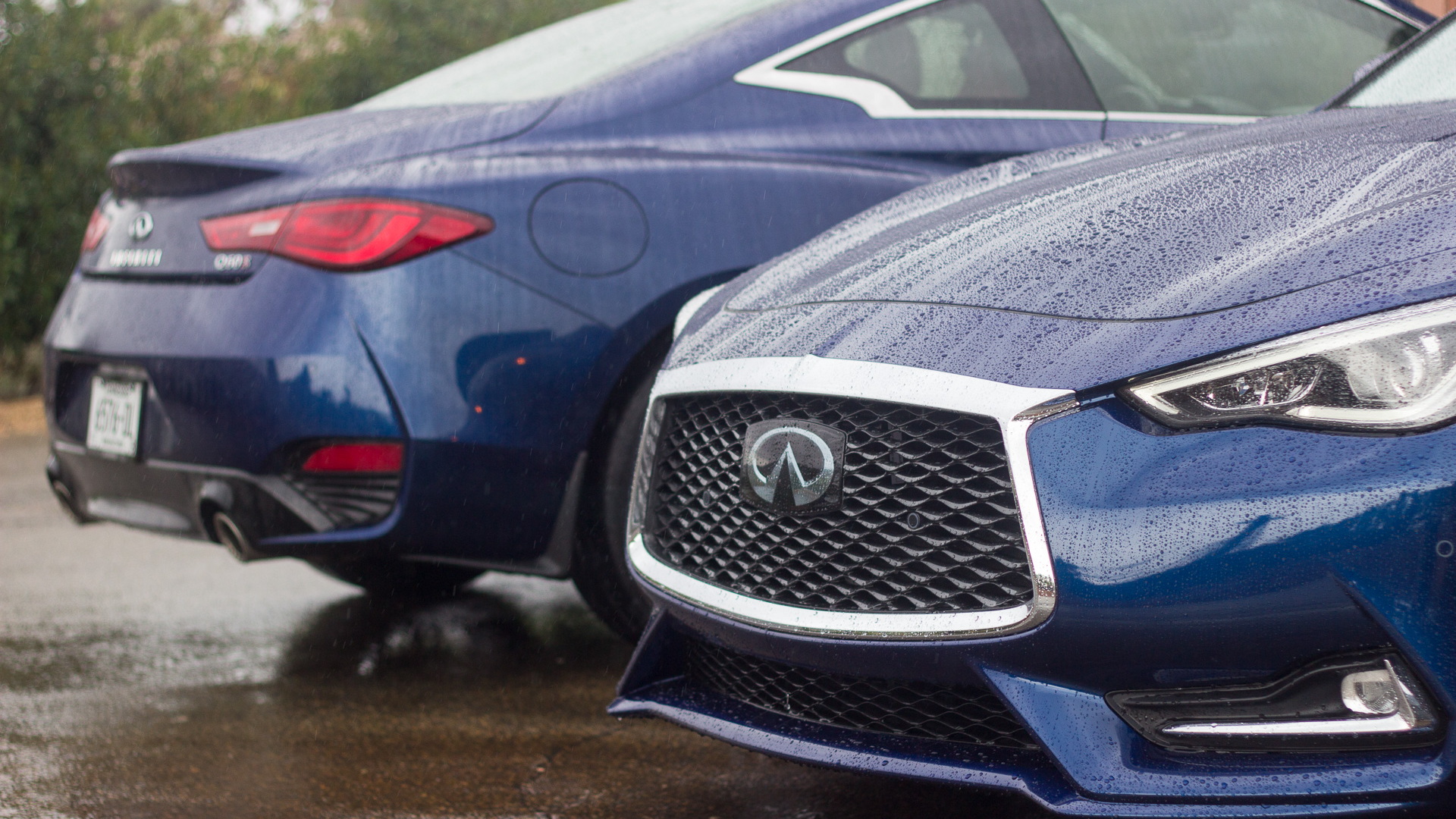 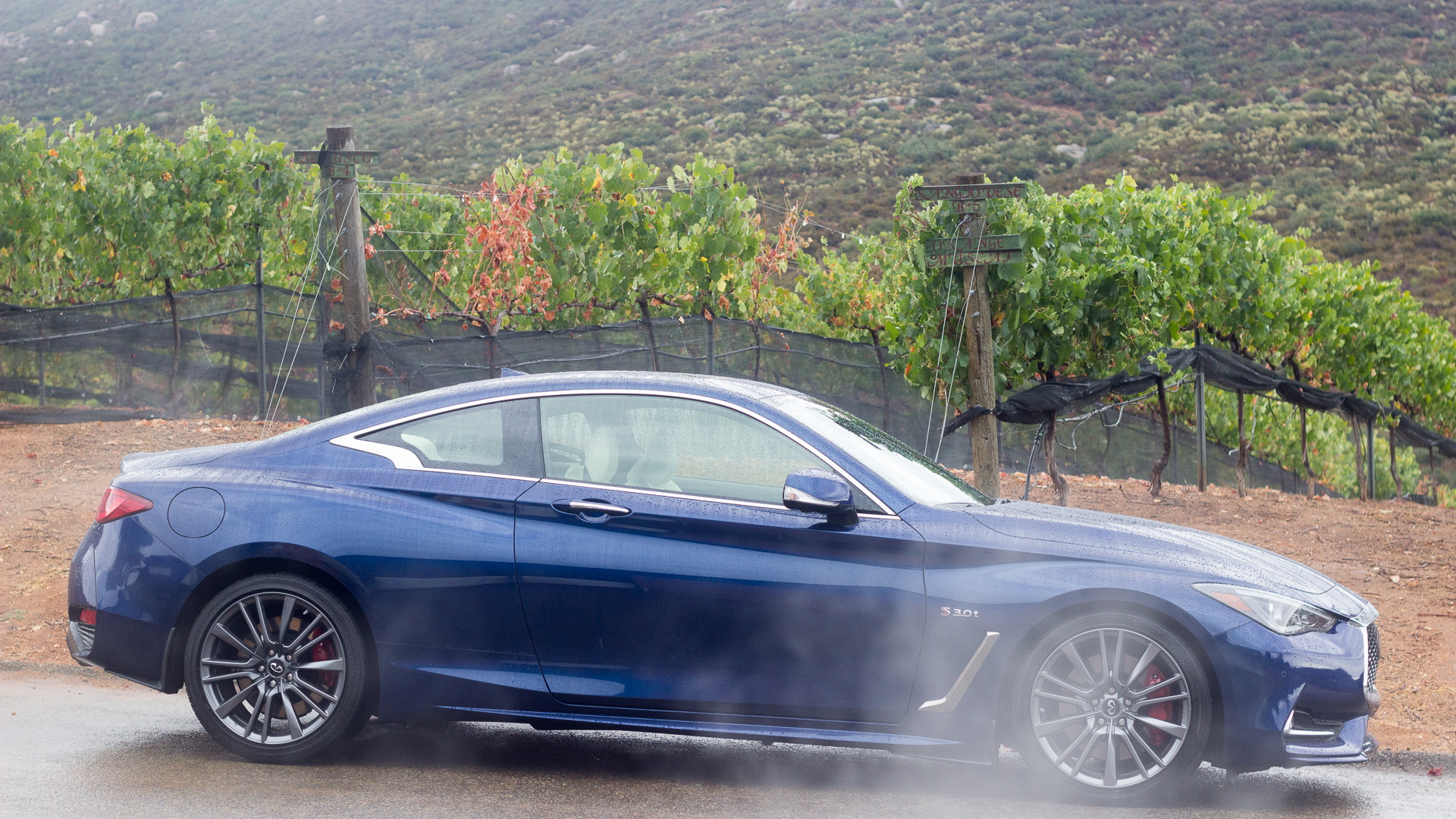 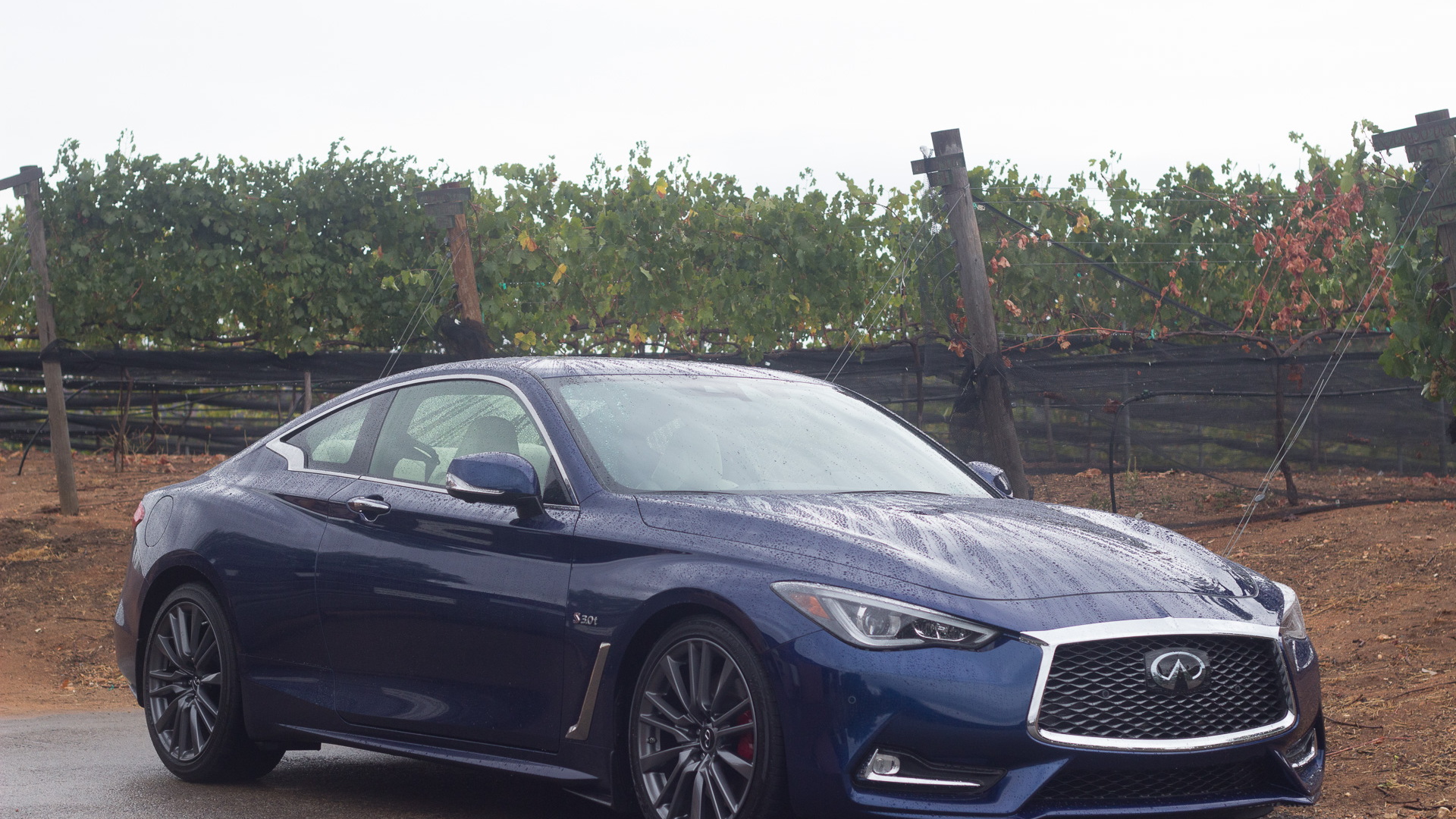 In top trim, Q60 Red Sport 400, the Q60 delivers on every one of its promises: It’s one better than the Q50 (from which its related); there is in fact, a red S (which is also part of Infiniti’s even more confusing nomenclature now); and every bit of its claimed 400 horsepower is believable.

Its exterior pulls no punches either.

Just below the enlarged grille, the lines from its lower front fascia ascend through the Infiniti badge and converge at a pinched point of sheet metal just above the arrow. Bookended by angry squinting eyes that double as LED running lamps, the Q60 looks more serious about its intentions on the road. Its fog lamps, which are accented by chrome hockey stick-shaped surrounds, double-time as square jowls on its newly minted mission.

The coupe smooths over the edges in profile view. The same dynamic proportions are there; its nose still inserts itself first into the conversation, but its followed closely by a steeply raked windshield and a cockpit perched closer to the front axle than some of its contemporaries. The Q60’s newest trick, a kinked C-pillar that double backs on itself is the most dramatic departure from the last generation, and in case you missed it, Infiniti chromed it.

There are touches of chrome on the door handles and faux front brake ducts that Infiniti toned down from its concept Q60. Both elements take away from the gracious curved lines Infiniti has draped over the rear and front wheels, but they aren’t liars: we know the Q60 doesn’t cool its anchors and the bright handles punctuate a daring character line that starts at the nose and dies at its rear haunches.

The rear of the Red Sport ends with drilled dual exhausts, a decklid spoiler that doesn’t make downforce as much as it casts a small shadow over the Infiniti badge, and a pair of right-angled edges on the bottom rear bumper draw the wide 295 mm rubber toward the exhaust oulets. For a sports coupe that manages to look organic—downright naked next to a BMW M4—those twin fins are the only overworked part of the car. Who brought the protractor to work that day?

(OK, so the Q60’s drilled exhaust tips fib a little: they don’t make a perceptible impact on its V-6 growl, in any way whatsoever.)

The Infiniti Q60 Red Sport supplants the Q50 Red Sport as the top of Infiniti’s performance pyramid; the former IPL (Infiniti Performance Line) summit is gone for the automaker.

Under the hood is a turbocharged version of the new corporate V-6, which made its debut in the Q50. This 3.0-liter is force-fed to within an inch of its life to make 400 horsepower in the Q60 Red Sport, and it sits atop a trio of turbocharged engines available in the Q60. A 2.0-liter inline-4 makes 208 hp in Q60 2.0t versions, and the aforementioned turbo V-6 is tuned to a lower 300 hp in the 3.0t versions.

All engines are mated to a 7-speed automatic that’s indecisive at lower speeds, but more than willing once you’re up to highway speeds. You’ll want the standard paddle shifters on the Red Sport to grab the Q60 by the scruff of its neck, but they feel a little flimsy compared to the confident, skinnier posts found in the old G37.

Snap off shifts in the Q60 and steer with your right foot. The Q60 is more than willing to spin up its rear tires anywhere, 400 horses will do that—no doubt exacerbated by the rain-soaked Southern California roads we drove on.

It’s devastatingly fun in wet empty lots to watch the Q60 Red Sport whip its back end around like a dog sprinting around a hardwood floor, but this car is the wrong tool for that job. The traction control—even at full “off”—still steps in eagerly. Thanks a lot, Obama.

Purists may bemoan the lack of a third pedal in the new Q60, but that's not the point—it’s more of a sports coupe, not a sports car.

Yes, it’s the lineal successor to the G37 that was a surprising driver’s machine. No, it doesn’t feel anywhere near the same. The 2017 Q60 has put on a winter coat from just five years ago; the new Red Sport coupe is nearly 150 pounds heavier than the old G37 Sport, or about 100 pounds more than last year's model.

Infiniti pegs the Q60 Red Sport’s 0-60 mph time at 5.0 seconds with all-wheel drive, a few ticks slower in rear-drive configuration. It’s every bit as fast as those numbers would indicate—but in a straight line only.

Turn the Q60 onto the twisties in spitting Southern California rain and a few truths emerge: First, the Q60 responds best with slow, deliberate instructions, which is a byproduct of its considerable weight; second, that the new drive-by-wire system in the Q60, and a new generation, has now caught up to more traditional racks; and third, the Q60 woefully overwhelms its brakes.

Let’s talk about that last point first. Much like the Q50 we walloped around the track, it doesn’t take much to bring the Q60 Red Sport’s 16-inch rotors up front up to temperature—and then perhaps past it. The brake pedal doesn’t communicate much fade from the aluminum stoppers, but step outside and smell the glory—our nose let us know that the big Q60 asks a lot from its anchors.

After roughly 30 minutes of brisk driving in the hills outside San Diego (it was pouring rain, so it wasn’t all that brisk) the brakes in our Red Sport 400 were obviously gassed.

When they’re working, they work very well. The Q60 doesn’t dive under braking, and unlike the Q50, the coupe readily loads up its front and shoulders into corners without much squirreling from the rear end.

Part of that has to do with Infiniti’s Direct Adaptive Steering system, which is one of the industry’s first drive-by-wire setups. Optional on most coupes, DAS sports multiple settings for steering comfort and weight, though most of them skew toward light.

We found our favorite setting in Sport+, which relayed an appropriately heavy feel through the wheel, but also with consequence. The variable ratio rack swings wildly from an impossibly fast 11.86:1 to a slow 29.38:1, but the system feels more natural now than it ever has—picking the system for its comfort no longer requires overlooking its faults for sporty driving.

But the Q60 won’t dart or knife through many corners. It’s at its best when its kept far from a ragged edge—make reservations for that hairpin in advance, please—and more sane in its aspirations.

If the Red Sport wants to compete with the BMW M4 and Mercedes-AMG C63, it’ll have to go on a diet first.

If the performance isn’t a hint, the interior is a dead giveaway. The Q60 is about luxury first.

Soft, beautiful hides adorn the interior like a vastly more expensive German ride. In our first test car, a deep shade of blue that Infiniti calls Iridium Blue was embellished with Gallery White leather seats in a shocking shade of ivory. Red leather with the same Iridium Blue, like our afternoon car, looks downright devastating.

Infiniti’s attention to the quilting pattern and layout pays off here: it’s a far cry from the dark G37 and a much better experience than that car.

The coupe’s generously sized windows make for a bright and spacious cabin—opting for white hides only underscores its spaciousness.

The layout is undeniably symmetrical, but most vital functions have been placed closer to the driver. Infiniti’s frustrating dual-screen layout remains in the Q60; the top 8.0-inch touchscreen relays navigation, infotainment, and some car setup information, but the bottom 7.0-inch touchscreen controls more of the car’s setup and customization options. The bottom screen is crisp and sharp, clearly a new addition for Infiniti; the top screen’s resolution isn’t the same and is deeply in need of an update.

One quibble: A rocker switch near the shifter lets the driver choose between Eco, Comfort, Sport, and Sport+ settings, same as the bottom touchscreen when you enter the Driver Mode Selection setup. While the rocker switch only toggles between four setup modes, the touchscreen boasts an endlessly complicated 336 possible variations for the Q60 Red Sport—death by possibilities. However, we noticed that switching one setup didn’t affect the other—setting the rocker’s “Driver Mode Selection” to Sport+ didn’t change any of the “Driver Mode Selection” settings in the touchscreen below. We asked Infiniti engineers if we found a bug, or if the two settings controlled different aspects of the car (despite having the same name) but didn’t receive much of an answer.

Even with that question, the Q60’s best solution is a softer suspension setup. Even with staggered-size 19-inchers filling out most of the wheel arches, the Q60’s softest rates soak up road imperfections without relaying much drama on the inside. Road noise is fairly well isolated, and the Q60’s generous stability and control systems step in quicker than the V-chip.

That adds up to a cruiser that’s better suited for open stretches than narrow corners.

But don’t take my word for it. Just look at the Q60 Red Sport’s entry price, north of $52,000 and easily approaching $60,000—it’s far more serious about its luxury potential.

And it’s not lying.

CORRECTION: An earlier version of this story misstated the overall weight of the 2017 Infiniti Q60 Red Sport. Its curb weight this year is 3,862 pounds.