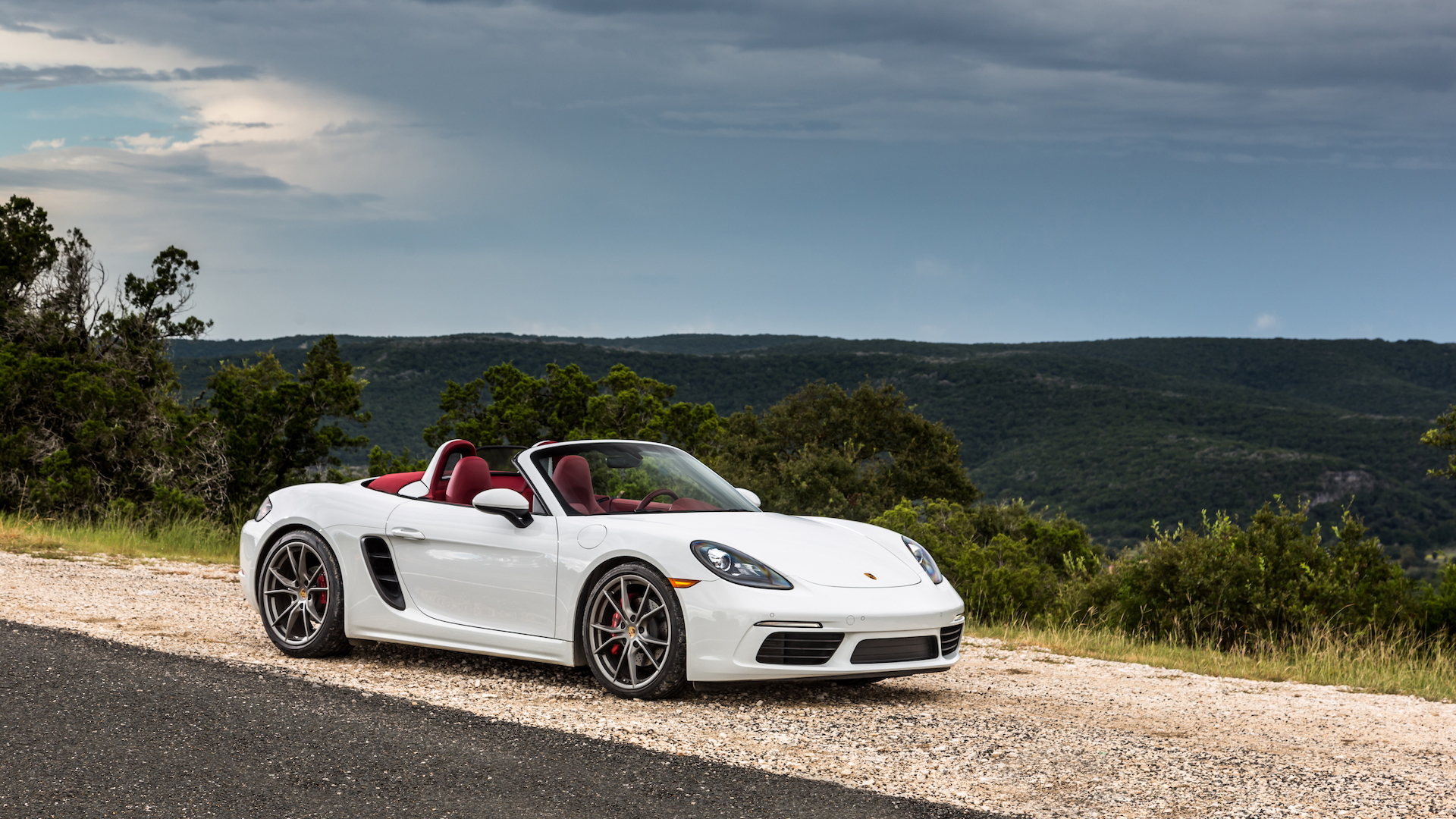 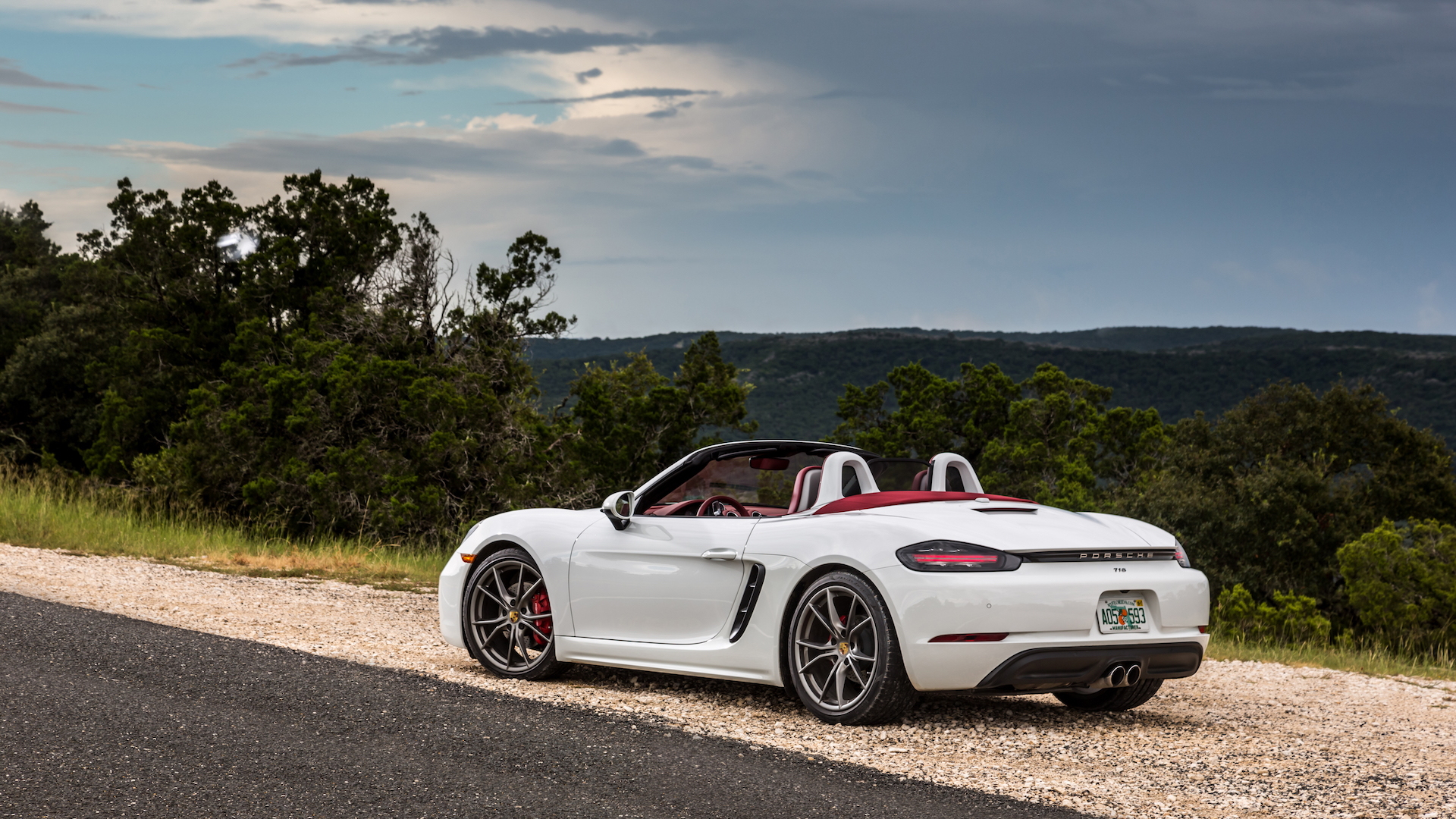 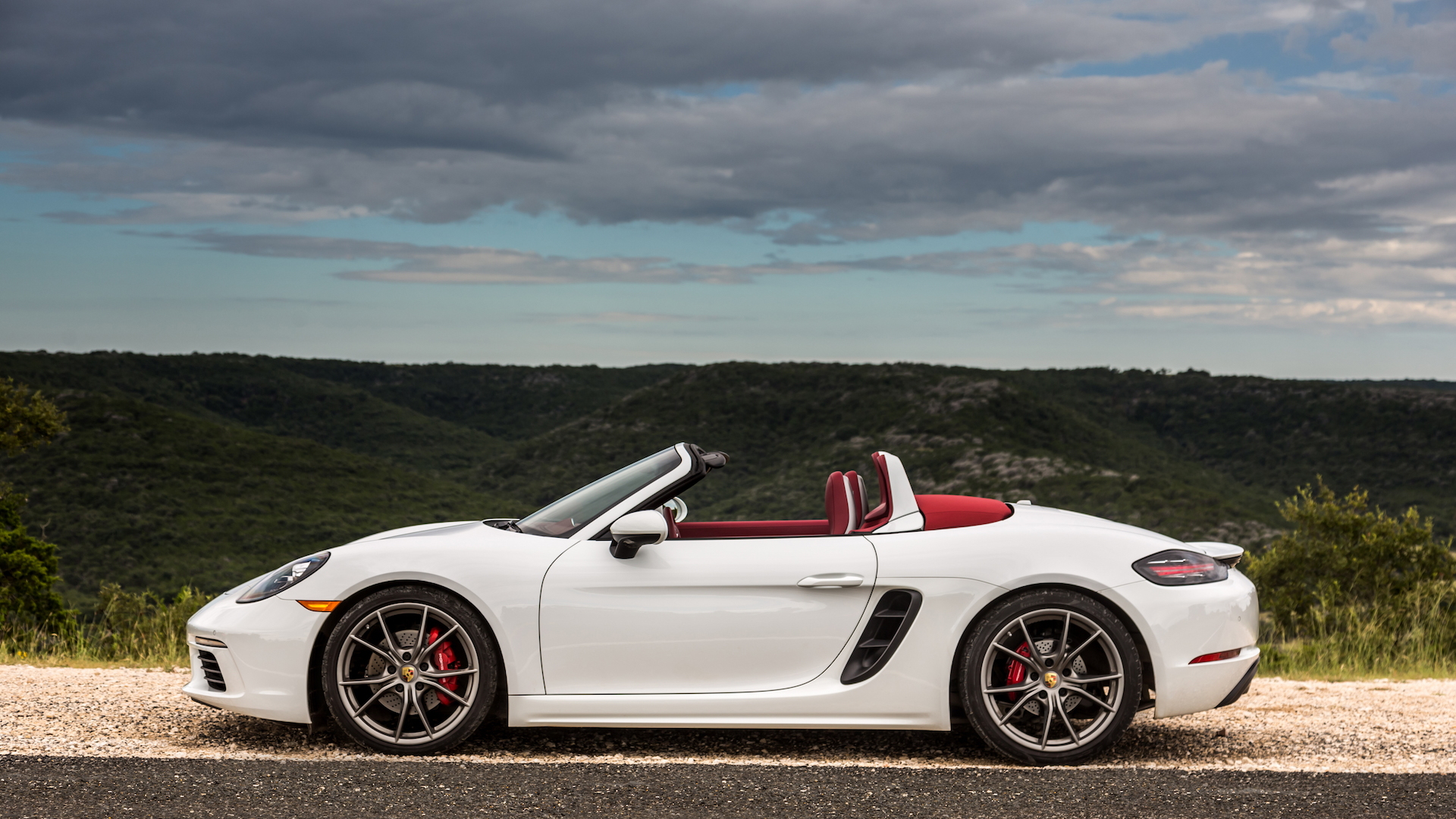 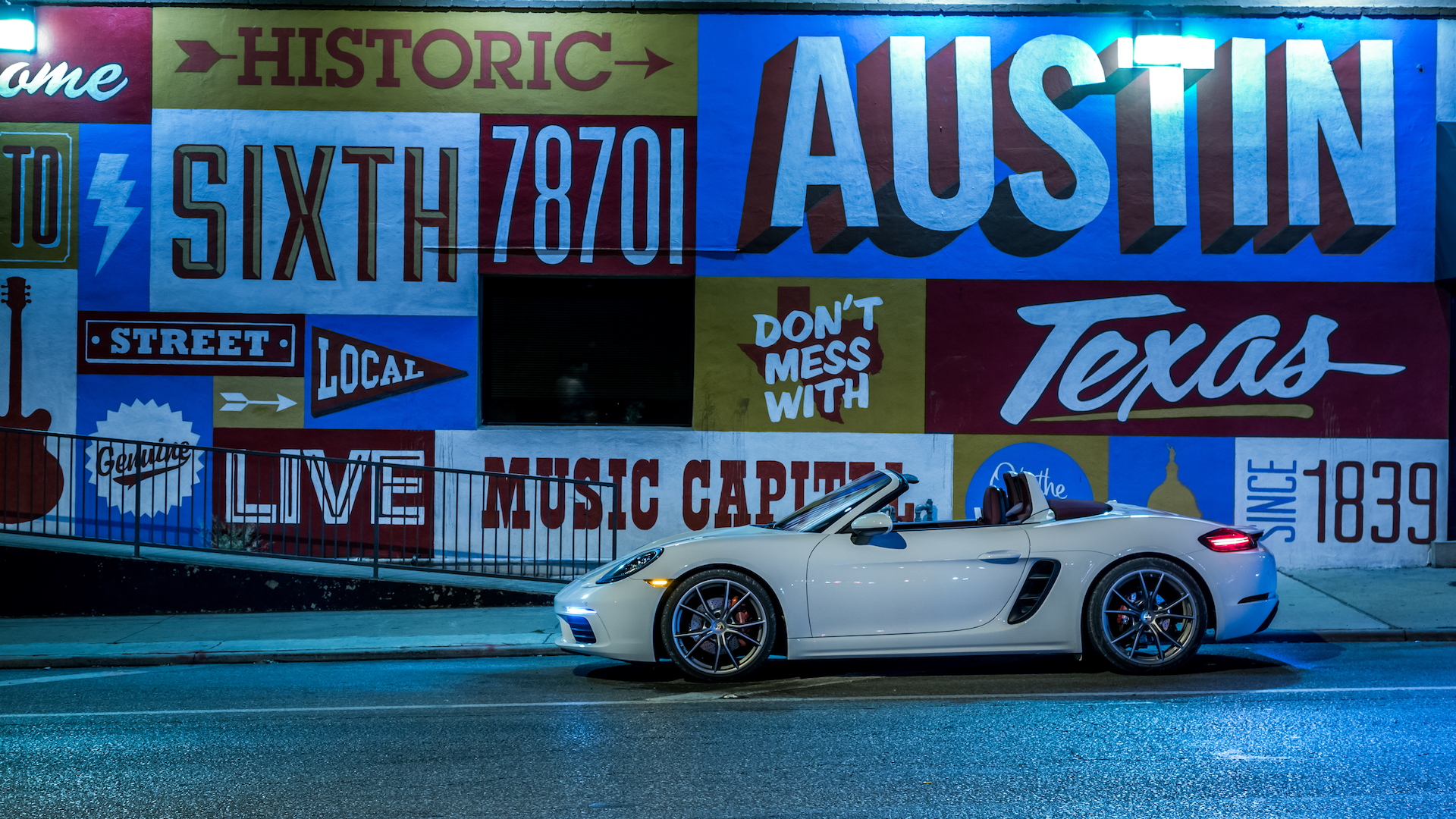 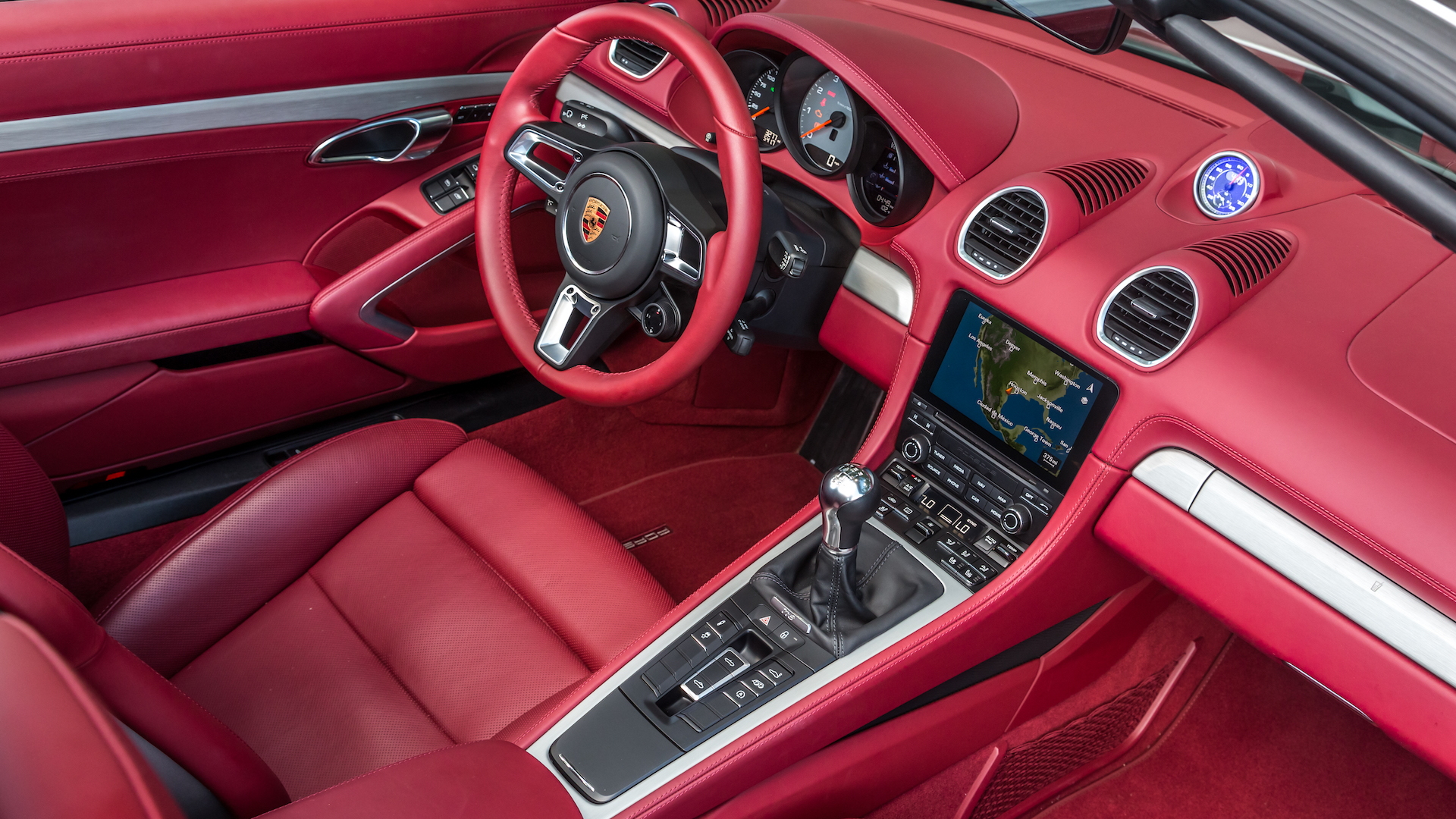 The Porsche Boxster and Cayman are brilliant sports cars, but they're not so different as the names might suggest — they’re basically the same car, aside from that minor roof thing. So why different names?

Indeed. This year, Porsche's debugging that situation by adding a new prefix. Meet the 718 Boxster and 718 Cayman, essentially similar cars to last year's models, now with a first name borrowed from an open-cockpit racing Porsche from the Eisenhower era.

This is not merely a throwback exercise, like putting Mountain Dew in vintage '70s cans. While the badges are being hot-swapped, so are new powertrains.

Wave goodbye to the flat-6, and say hello to a new turbocharged flat-4.

Is it heresy? Two fewer cylinders suggests these cars have lost something, maybe even their Porsche-ness? Doesn't Subaru make a turbo flat-4?

Take a peek at the spec sheet and the stopwatch, and you'll see the decision was a wise one. The noises coming from over the shoulder may sound quite different, and there's a spike in power that wasn't there last year, but the 718 is faster than the Boxster and Cayman S were just last year.

The basic architecture of the drivetrain is now the same as the 911, Porsche says, with many shared parts and technology. Between themselves, the flat-4 engines share a stroke, if not their bore. Peak torque shows up at 1,900 and 1,950 rpm, respectively. They redline at 7,590 rpm, just shy of the flat-6 engine's 7,800-rpm redline.

Both cars use airflow techniques that Porsche employs on the 911 Carrera turbo to keep the turbos on boil: the wastegate opens and closes to maintain airflow in on-off acceleration, so it takes less effort to spool the turbo when it's called to generate boost. The engines share a stop/start system that shuts off engine when braking, except when in in Sport or Sport+ mode.

Where they differ is inside the turbocharging package. The 2.5-liter engines have a variable-geometry turbocharger that helps them make more torque as they approach that peak, and dry-sump oil delivery so they won't starve after repeated laps on a track.

Performance has gone from scalding to blistering. the 718 shreds 0-60 mph times even more successfully than it did under its maiden name. Whether you choose the manual or the dual-clutch. With the Sport Chrono package and Porsche’s 7-speed dual clutch transmission, the 718 Boxster will hit 60 mph in 4.5 seconds; the Boxster S, in 4.0 seconds. Those figures shave at least half a second off the flat-6 cars. Top speeds are 170 and 177 mph, respectively.

Those numbers are for the optional dual-clutch transmission; a 6-speed manual is the standard gearbox, and it's the positive, clean-shifting, feel-good manual it's always been. The new 7-speed paddle-shifted dual-clutch is the best of its kind; it creates virtual intermediate gears by engaging both its gearboxes and slipping both its clutches, in the name of better fuel economy.

The Sport Chrono Package carries over Normal, Sport, and Sport Plus modes, but now adds an Individual mode that lets drivers adjust the various vehicle systems to taste. A new Sport Response button for models with the dual-clutch sharpens the responsiveness of the engine and transmission. Think of it as a flash-to-pass button for the powertrain.

What's not to love? We've heard complaints about turbo lag on the base car, but that complaint is perception, not math. By the stopwatch, the 2.0-liter cars are faster than the old Boxster S and Cayman S cars with the naturally aspirated flat-6. That engine built torque more slowly and evenly; by the time the smaller flat-4 is barely off idle, it's only a thousand revs off peak torque. Compared to the 2.5-liter, the perception of turbo lag evaporates; the variable turbo vanes put that engine into an even steeper torque climb.

Noise is a fair complaint against the new engines. There's some more boom and rasp that comes with lopping two cylinders off a flat-6. But dial up the extreme exhaust noises from the 718's available sport exhaust and, trust us, the overrun noises make up the difference.

New engines require a round of suspension re-tuning, and Porsche obliges with a firmer setup that allows more stability-control leeway. The 718 is less neutral than before, more free to let its tires break loose, but it's no less thrilling to drive. It remains one of the best-balanced sports cars we've driven.

The MacPherson strut suspension front and rear is unchanged, but on some cars, an adaptive suspension creates a pretty wide gulf between normal, Sport and Sport+ modes. The base version has a 10-millimeter lower ride height and the PASM Sport Suspension for the S model has a 20-millimeter lower ride height. No matter which mode, the 718 is amazingly compliant for a car with such massive levels of grip, and even more roll stiffness than before.

The 718's electric steering gets remapped, with 10 percent more effort required at 90 degrees of lock. Electric power steering is often maligned for lack of feel and artificial feedback, but you'll find few such complaints here. It's light, but nicely weighted and accurate, and complements the superb dynamic poise of this car.

Half-inch wider 18-inch wheels are shod with 235/35-ZR Pirelli P Zero tires up front and 265/45-ZR on back, on base cars. The 718 Boxster S and Cayman S get 235/40-ZR19s and 265/40-ZR19 Pirelli P Zeros, front and back. Brakes are slightly bigger and thicker than before, but braking performance was never a complaint with the Boxster or Cayman: the pedal feel is superb, the responses immediate.

Stability control gets a bigger role in the 718. Torque-vectoring programming clamps on an opposite rear brake to tighten a cornering line. On Sport Chrono cars, the stability system's new Sport mode intervenes later, for a more track-friendly mode that won't scare off drivers. The safety net is still strung in Sport mode because Porsche says normal drivers, even Porsche drivers, are afraid to turn the system off.

As for the rest of the car, the 718 carries over the Boxster and Cayman bodies with some very subtle changes—bigger front-end air intakes, available LED headlights and taillights, and new 19- and 20-inch wheels. They’re still the muscular, lithe sports cars we’ve loved since they were new.

They’re still comfortable, too. Porsche makes firm and supportive sport seats for the 718, and the convertible’s power-folding cloth top is reliably snug and well-insulated. About the only major complaint is that between the front and rear trunks you only have about 10 cubic feet if cargo space—so you're best to divvy your weekend road trip luggage up into several small, soft bags.

Buying a 718 brings all the standard stuff you expect, like power features and leather. It’s the options list where you can push a 718 well past $100,000—deep into 911 territory. Adaptive sport seats with heating and ventilation, custom leather trim on the dash and doors, or 821-watt Burmester audio seems like must-haves.

We named both the Boxster and Cayman as Best Cars to Buy, back in 2013 and 2014. With new engines, the 718 cars get quicker across the board, and more lively, without changing their essential feel. To us, they're the still reigning sports-car champs.