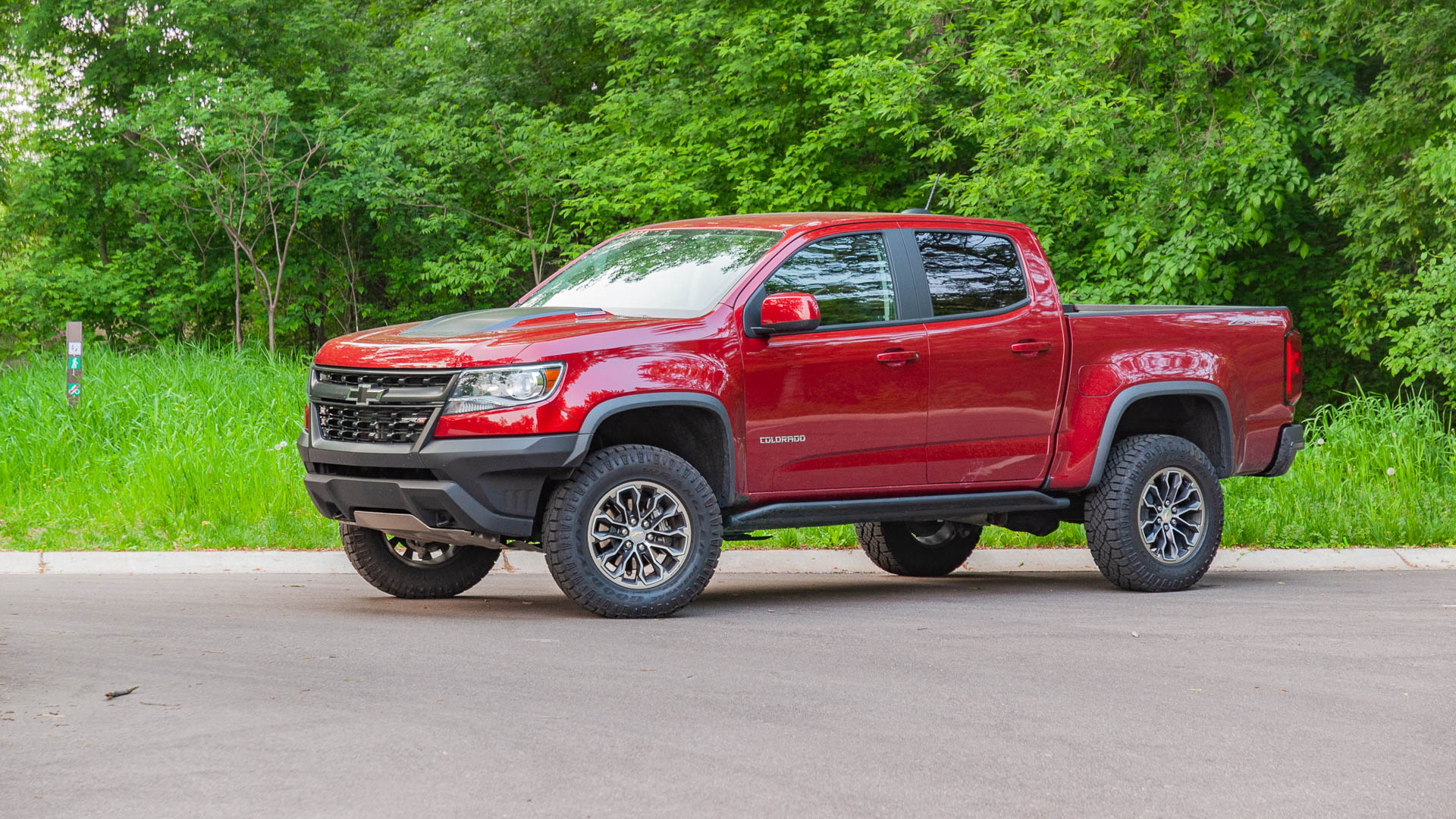 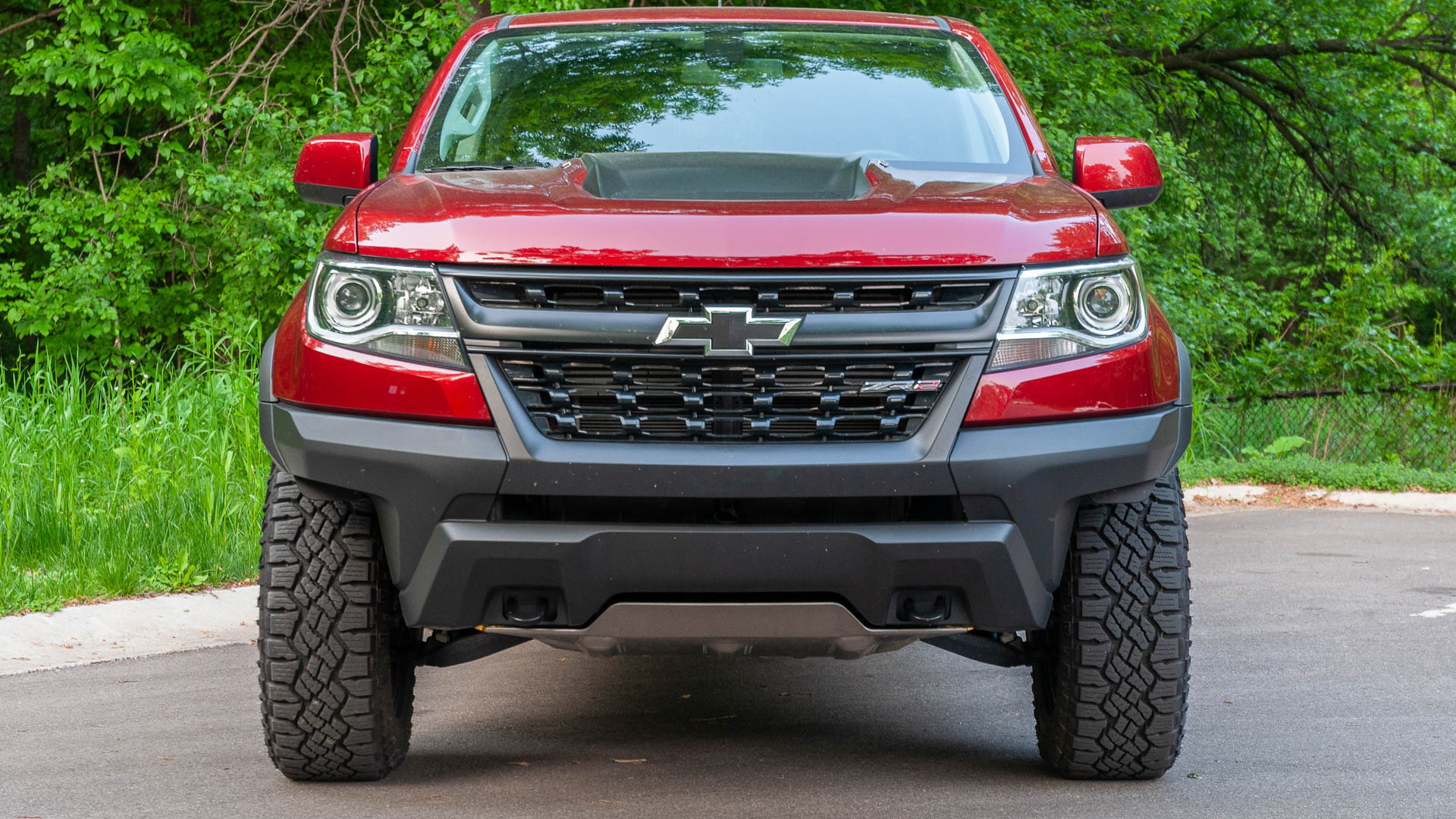 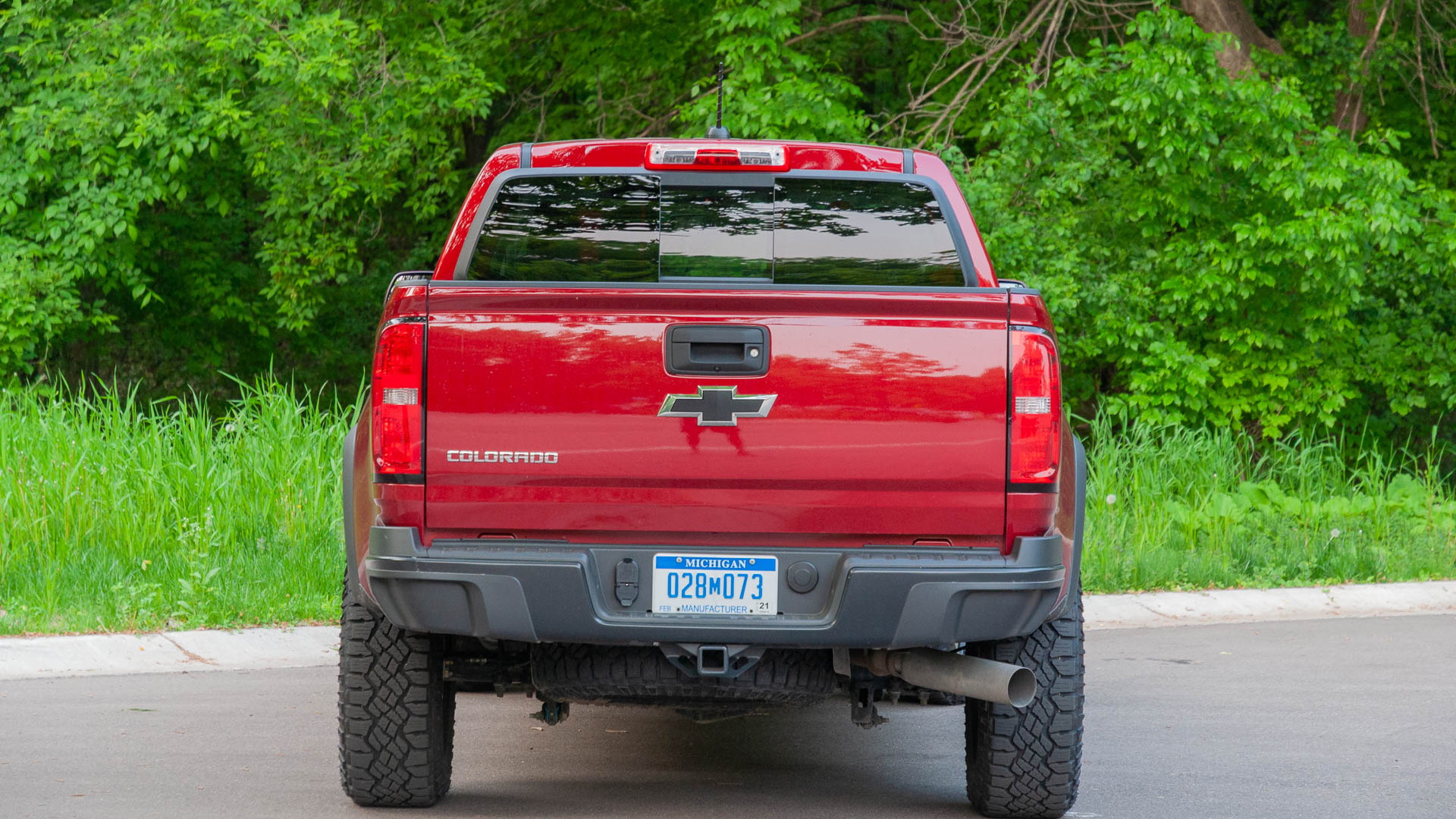 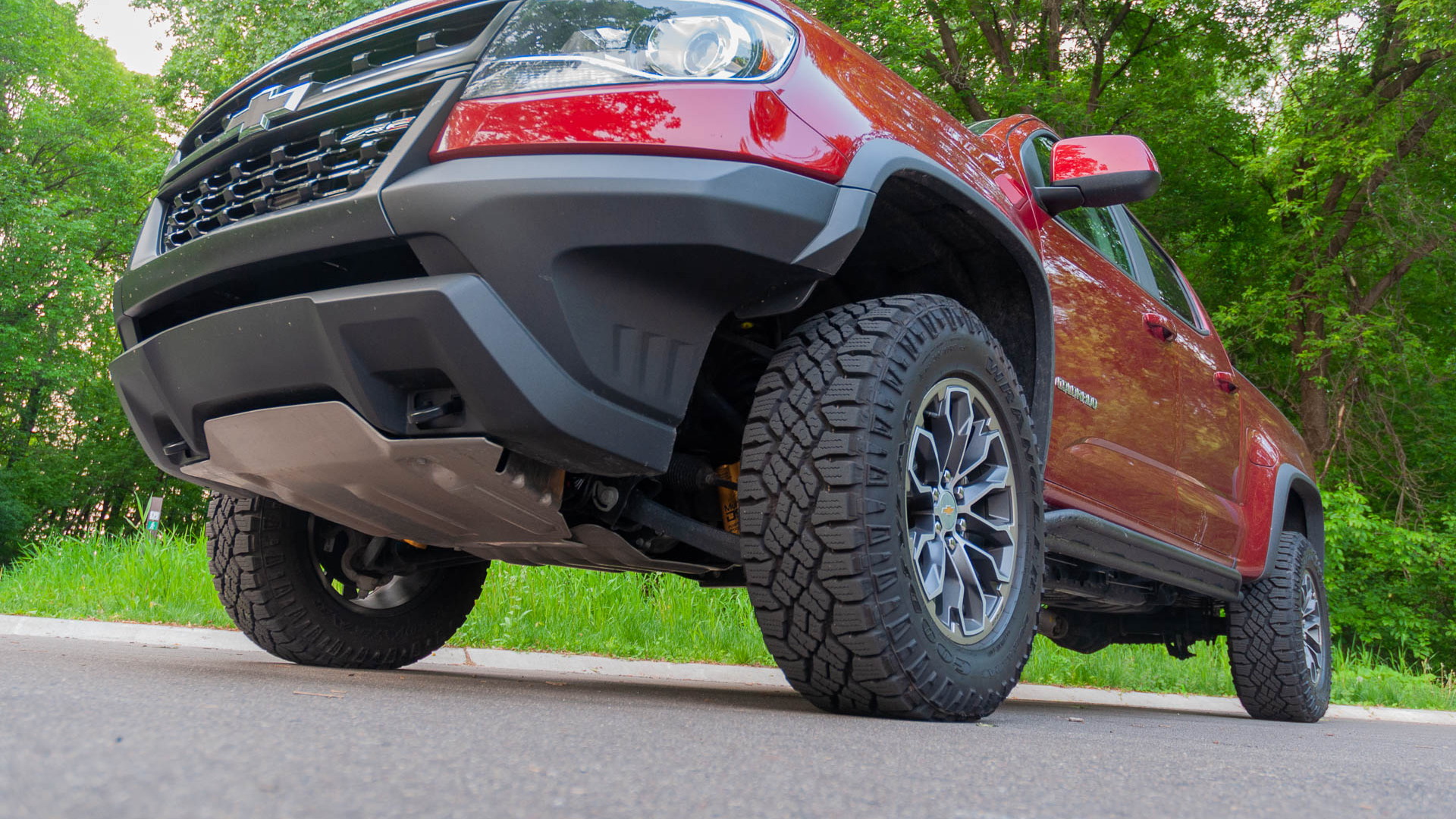 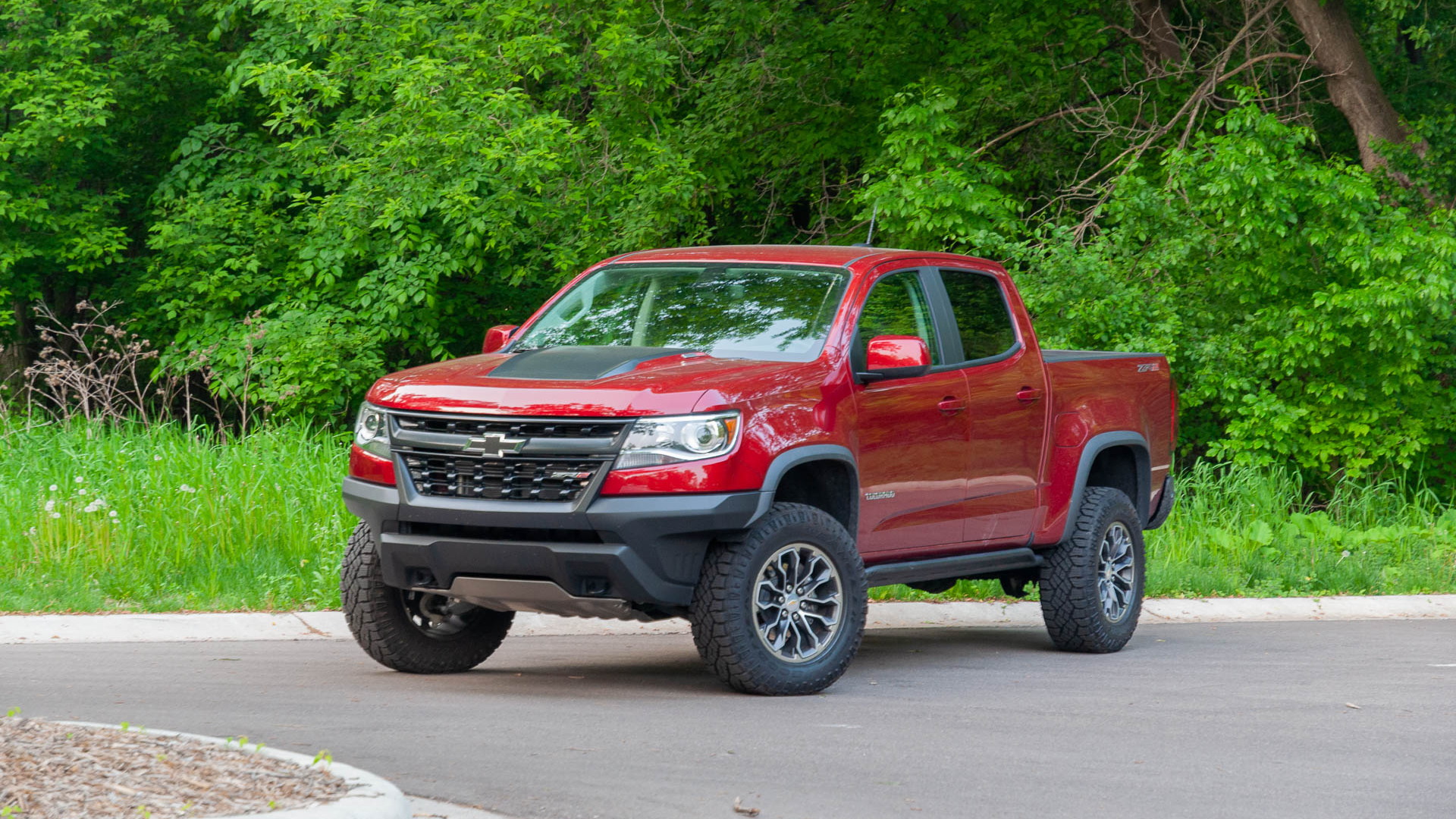 Why use a sledgehammer when a ball-peen hammer will do?

It’s an off-road monster that can dance with the larger Goliaths off the beaten path, but it’s more nimble and livable both on the trail and in the urban jungle.

I recently spent a week with the 2019 Chevrolet Colorado ZR2 in the city. Priced from $42,500 and $47,490 as tested, my 2019 Chevrolet Colorado ZR2 featured the optional turbodiesel engine for $3,500 and Cajun Red Tintcoat paint for $495. It had everything needed for an off-road adventure, but if you expect LED lighting, fun Easter eggs, or cooled seats, you'll have to look elsewhere.

We know the ZR2 can tackle off-road challenges with ease thanks to its stout hardware, including front and rear locking differentials, but what is it like to drive day to day when the trail isn’t always part of the equation? Here’s what I learned. 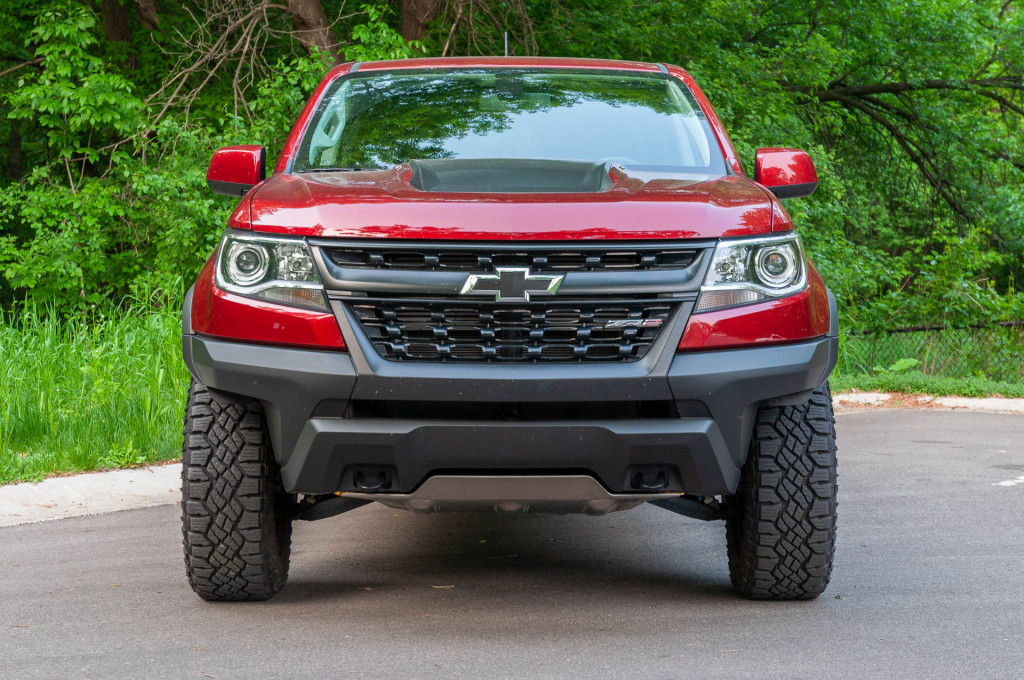 It looks the business

One look at the ZR2 and it's clear it isn't a standard Colorado and people noticed as I received countless comments about the “mean looking” truck. The front air dam was thrown away, the front bumper has cut outs for better wheel articulation and there's a better 30-degree approach angle. The hood has a bulge in the center to indicate more power lurking beneath, though there isn't, the meaty 31-inch Goodyear rubber fills the wheels. There are rocker bars along the bottom of the cab to protect the metal from rocks during off-road adventures, and plastic fender trim extensions to finish off the look.

The ZR2 is 2 inches taller and 3.5-inches wider than a standard Colorado to handle the large 31-inch Goodyear Wrangler DuraTrac tires. Those increased dimensions also make the truck more stable as it goes down the road and around corners, which instills more confidence behind the wheel. 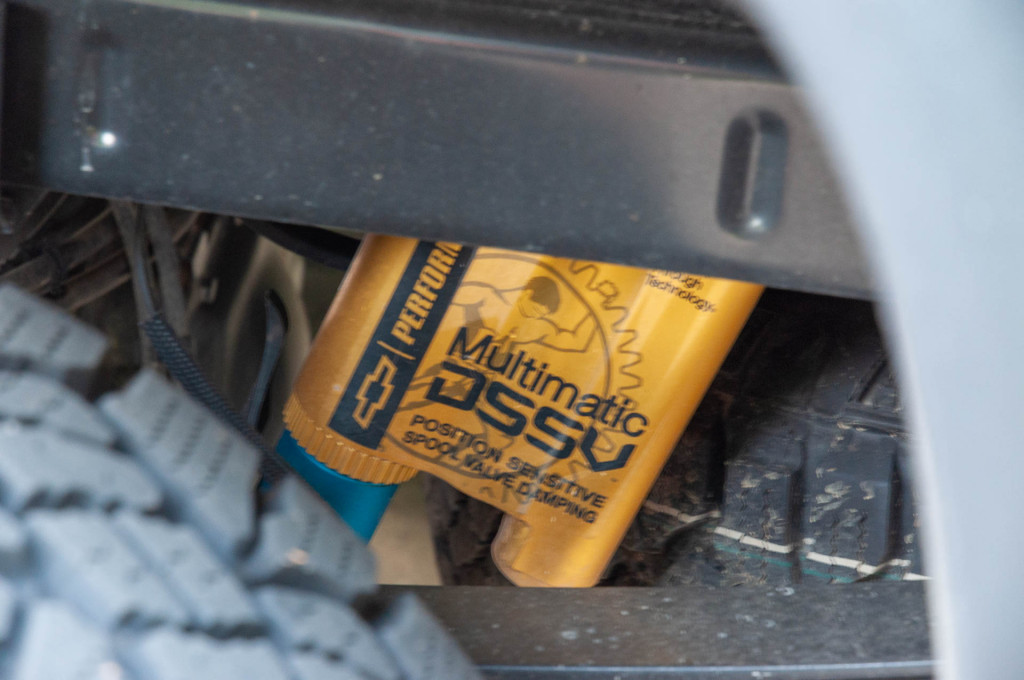 The Colorado ZR2 features trick Multimatic's Dynamic Spool Suspension Valve Position Sensitive Damping shocks. The DSSV dampers are specially engineered for the ZR2, and while they were created to tackle off-road situations, they benefit on-road comfort. Whereas the Ford F-150 Raptor's suspension floats down the highway as it smothers the asphalt, the ZR2's setup absorbs the impacts of highway expansion joints and potholes and controls them. Instead of floating down the road the ZR2 rides on it. The taller tires also help absorb the impacts of bumps.

My tester was powered by a 2.8-liter turbodiesel inline-4 with 181 horsepower and 369 pound-feet of torque sent to the rear wheels (or all four when four-wheel drive is engaged) via a 6-speed automatic transmission. It's down 127 hp compared to the available 3.6-liter gas V-6, but it's up 94 lb-ft of torque. That extra grunt that all comes on relatively low in the rev range and makes the ZR2 feel quicker than it is, especially from 0 to 30 mph. The 0-60 mph run takes a leisurely 9.7 seconds. After that initial shot of power, that grunt dissipates at higher or even mid-range speeds. Highway passing can be a test of patience, and it requires planning. 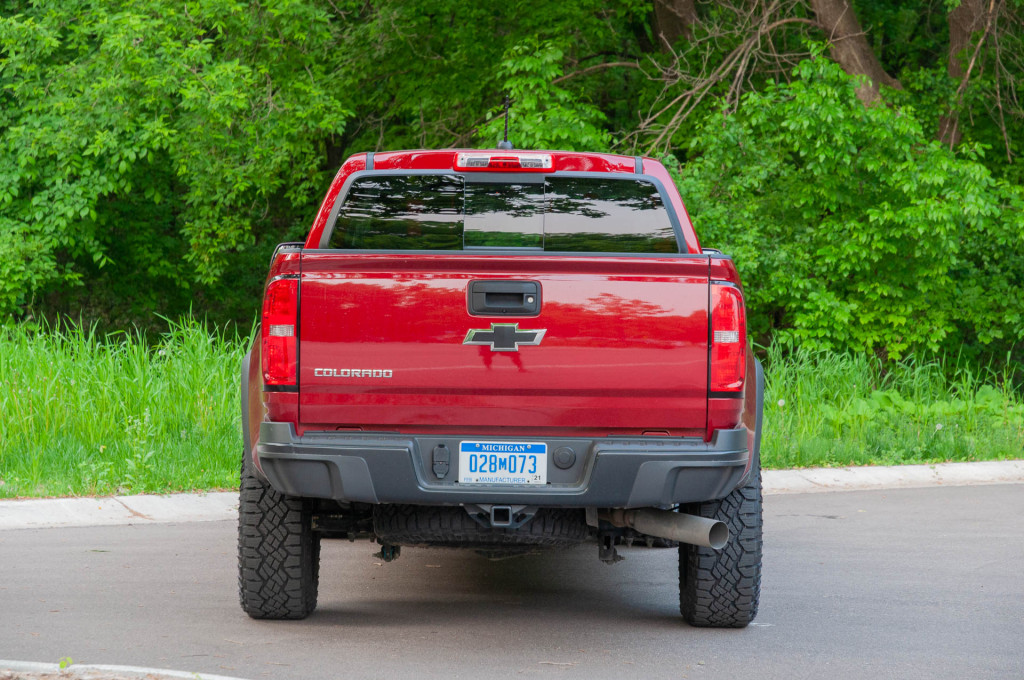 A Raptor, Ram Power Wagon, or any other full-size off-road-oriented pickup is a massive vehicle that can be a chore to live with day-to-day in the city. A simple run to Costco or Target can be a headache that involves negotiating tight alleys and fitting into junior-sized parking spots. The Colorado ZR2 isn’t compact, but its shorter wheelbase makes driving down car-lined, one-way streets and parking far less of a headache. Its size will also pay dividends on the trails where it can squeeze through tighter turns. 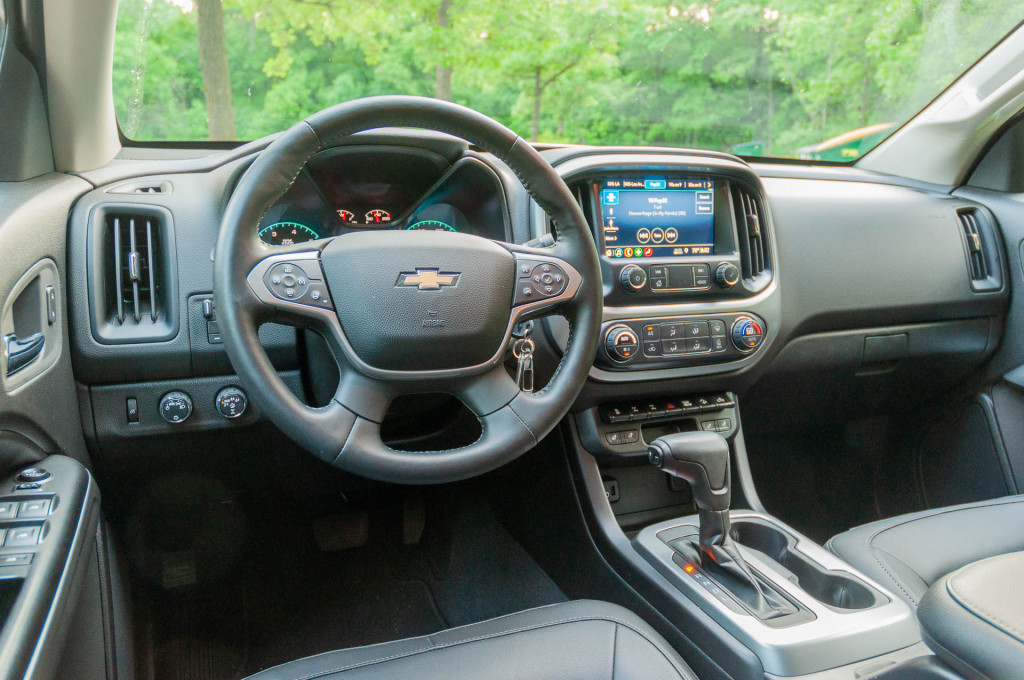 The ZR2’s cabin is a sea of black plastic. It's not special, but it seems to be made for off-roading. The buttons, dashboard, and controls are all hard, wipeable plastic with a low-sheen finish. They look fine, if a bit boring, though they are a little hard to stomach considering the $42,500 base price.

The Colorado has five seat belts, and my tester had the larger crew cab (a smaller extended cab is available). It's unlikely five adults will seriously want to take an off-road adventure in the ZR2 together unless they have multiple ZR2s. The rear seat is cramped as leg room is at a premium and the truck isn’t wide enough to make three adults happy back there unless they really like each other. Kids in car seats can fit in the back, but leg room is still at a premium. Kids out of car seats won’t have an issue.