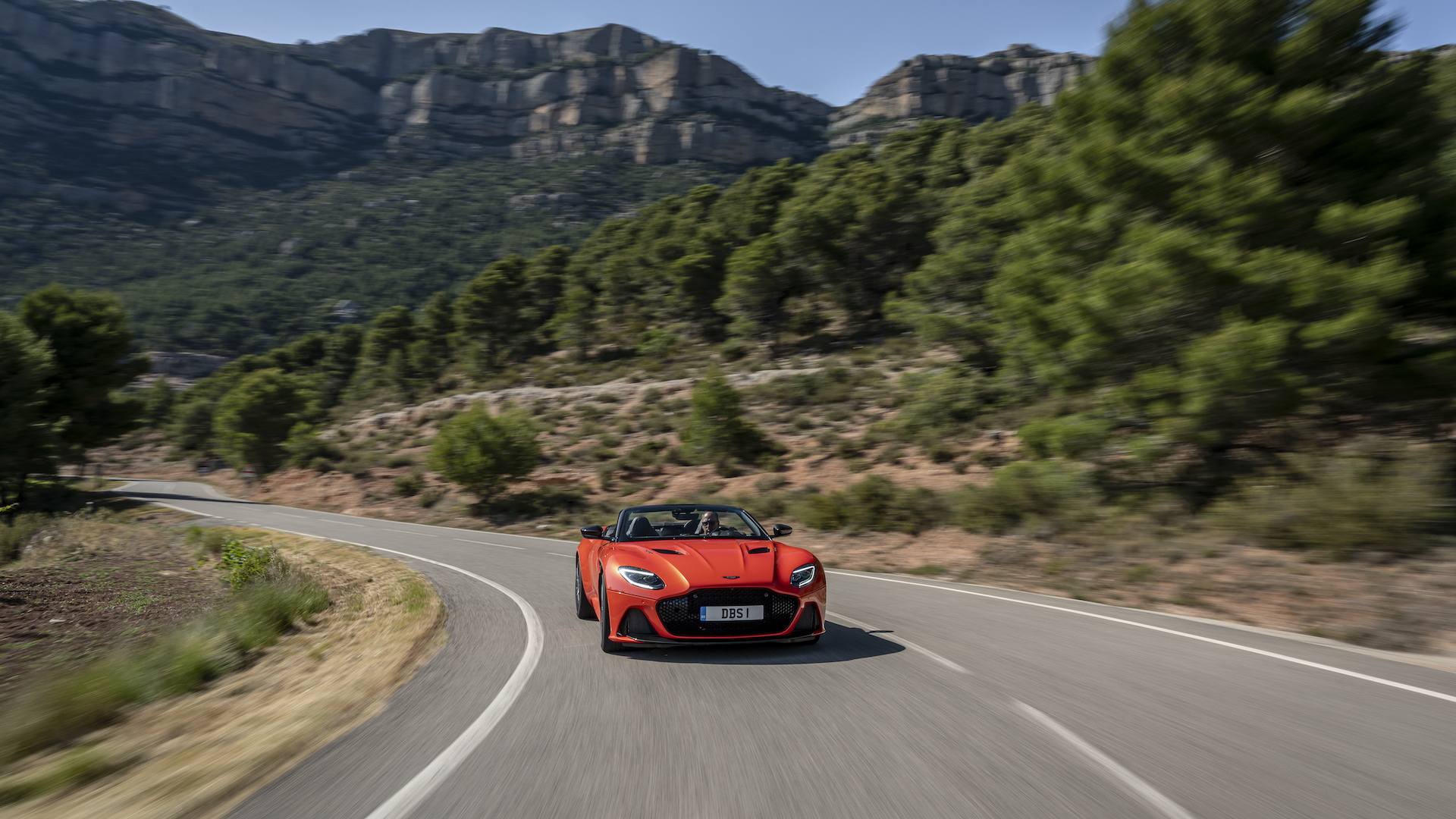 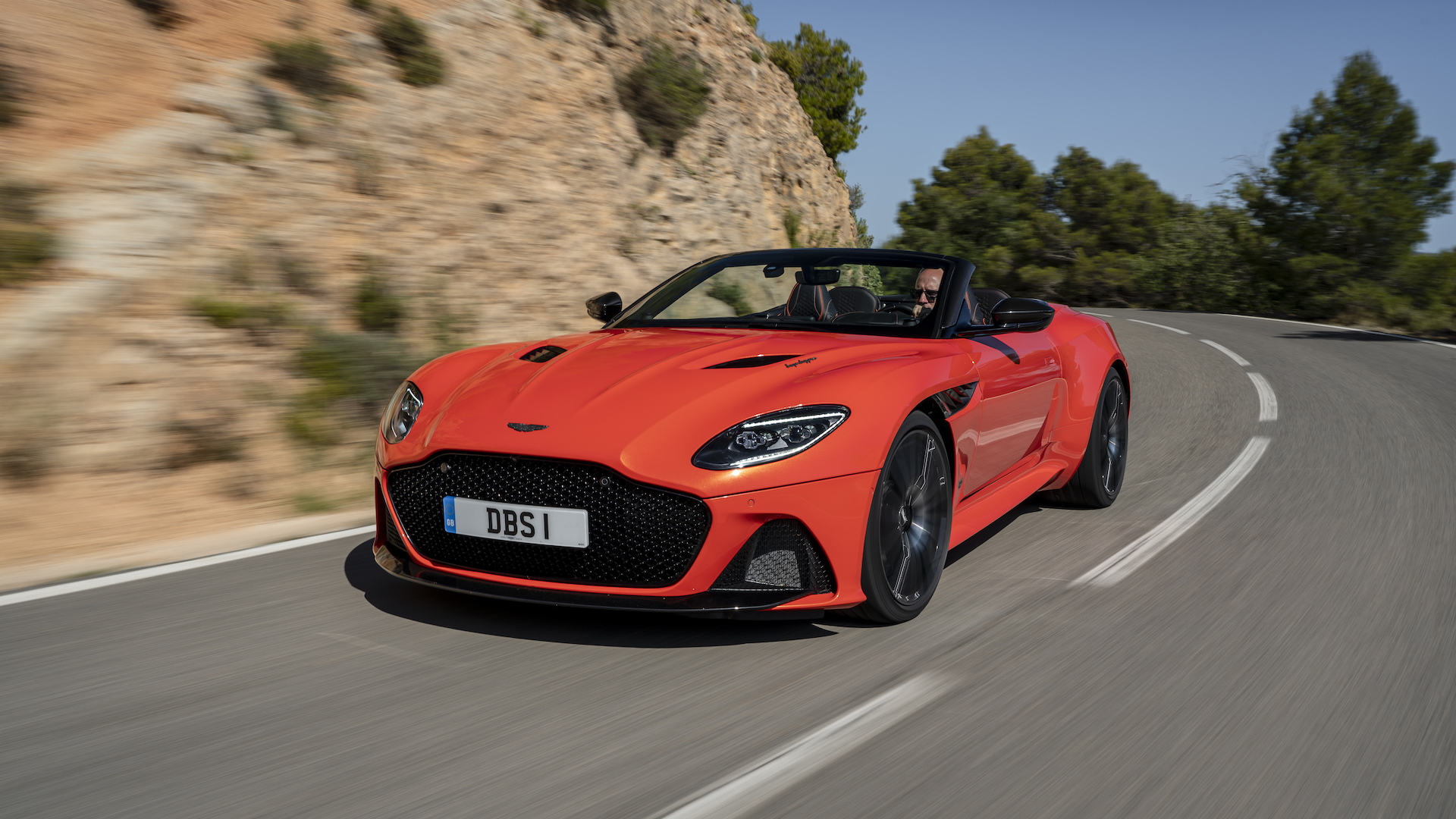 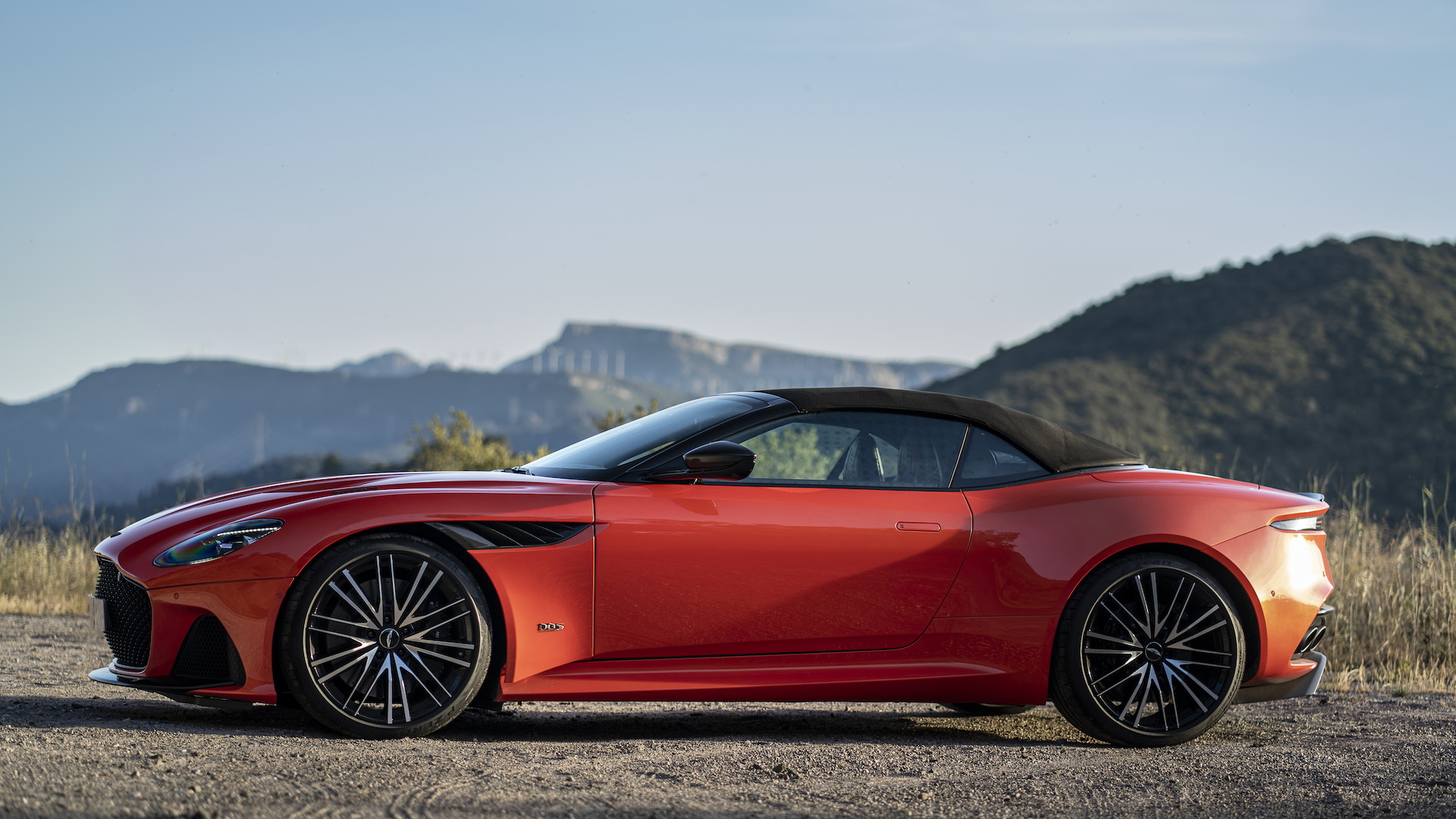 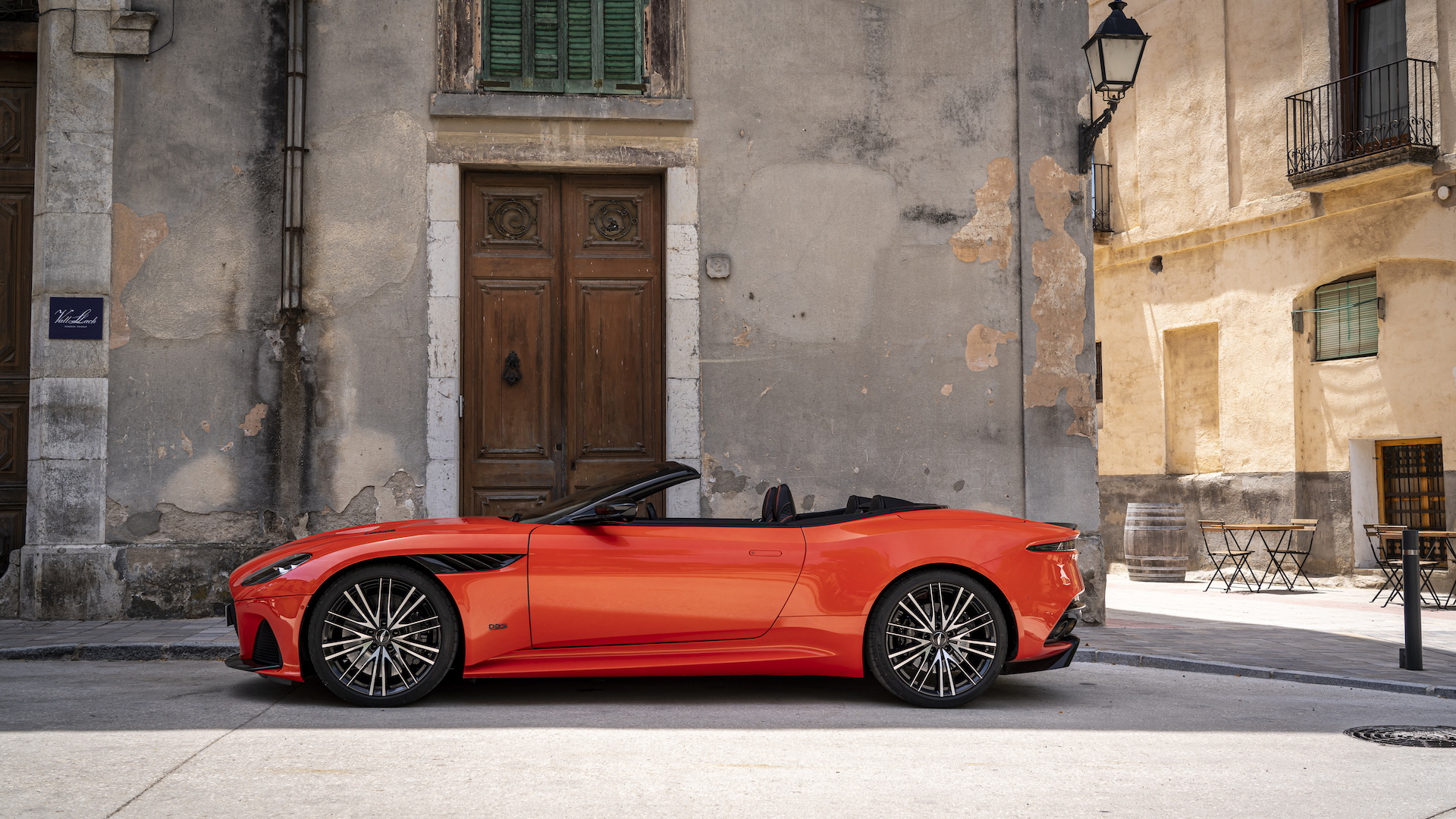 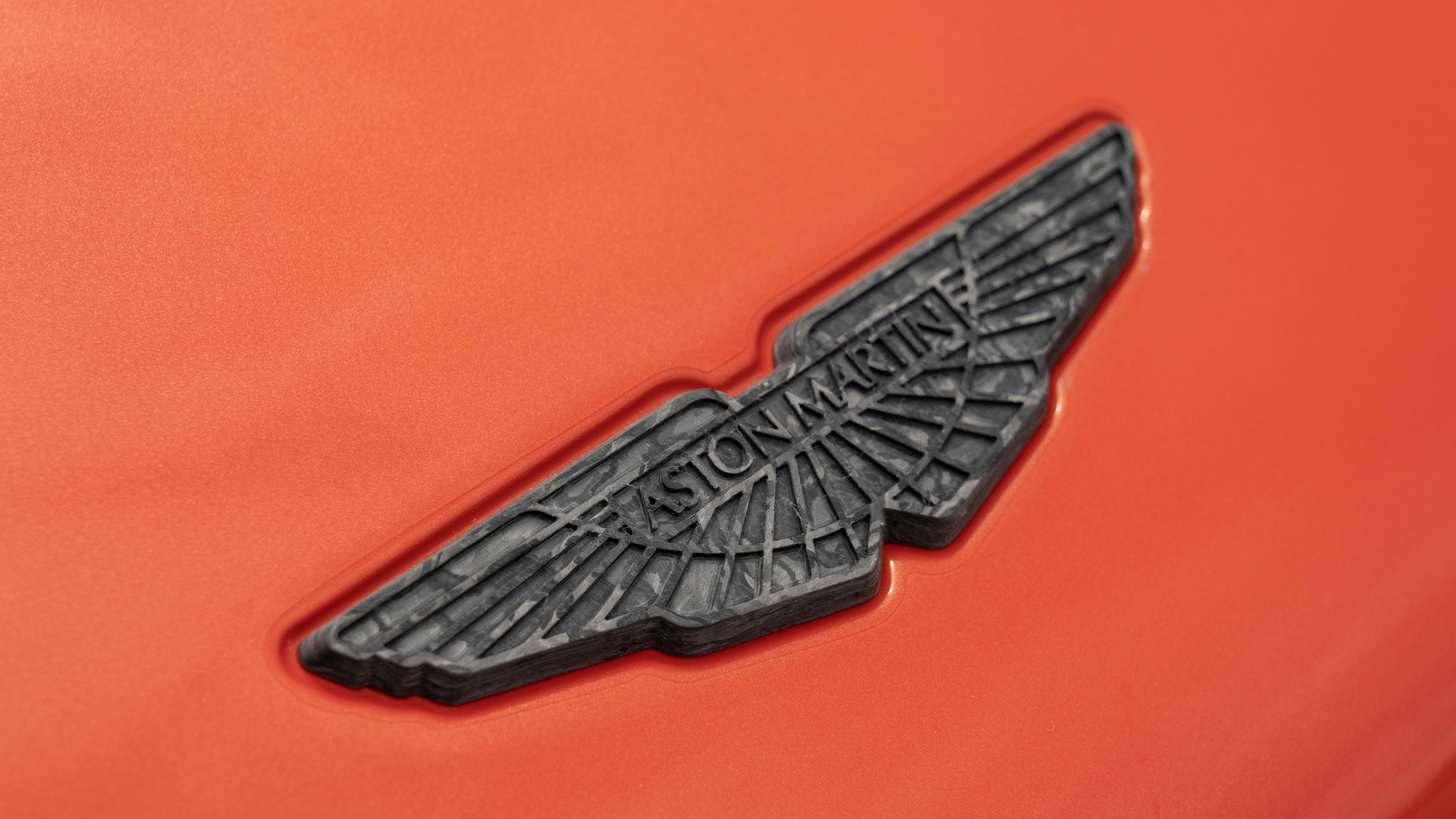 I’m riding passenger in the 2020 Aston Martin DBS Superleggera Volante in the dry heat of northern Spain, and it’s about to get hotter. My cohort on this trip has been driving relaxed in GT mode, but now the road straightens out and there’s a slowpoke in front of us. He kicks the powertrain into Sport+ and drops the hammer to pass. From the corner of my eye, I can see his head rock back as the twin-turbo 5.2-liter V-12 barks and shoots us past one of the ubiquitous white MPVs that dot these roads. “Holy sh#@!,” he exclaims. “Nobody needs this kind of power.”

But they want it, especially when it’s wrapped in a package that looks this good.

A roadblock for a crash and another for a wildfire delay my turn for a few miles, but I finally get my chance behind the Obsidian Black leather-wrapped steering wheel of this Zaffre Blue 2020 Aston-Martin DBS Superleggera Volante.

Top down, tunes off, A/C cranked, and seat coolers on, I set out with the rumbling, snorting, spitting V-12 as my soundtrack. I’ve driven the DB11 Volante that the DBS is based on, and this car isn’t just more of anything, it’s more of everything. And less, too.

The V-12 and ZF-sourced 8-speed automatic transmission have Sibyl-like personalities. I start out in GT and the feel of power is tremendous. The gears shift smoothly and the engine is relaxed, but torque stands at the ready, and head-snapping thrust is just a right foot away. Mash the throttle, especially in Sport and Sport+, and holy hell, nobody really does need this kind of power, but I like it!

Those Sport modes kick the transmission down a gear or two and incite the V-12’s full Mannheim Steamroller orchestra. If I thought the DBS was powerful before, the DBS Superleggera’s throttle has now been weaponized. Zero to 60 mph is a simple matter of 3.6 seconds. On a straight-line stretch of road in the middle of nowhere, I unleash that weapon and watch the numbers blur faster than the digital speedometer display them.

I won’t admit to hitting triple digits (in mph, not kph), but it’s obvious the DBS Superleggera Volante can punch through 100 and keep going up to its quoted top speed of 211 mph. In fact, Becker told me that the 211 mph figure is with the top down. Top speed is more like 215 mph with the top up.

The more is also found in the looks. The DBS has a larger, hungrier front grille than the DB11. As an Aston designer says, it’s to fill your rearview mirror just before it passes you. Only the doors are shared with the DB11. The rest of the car is more sculpted and even more sensual.

But the body offers less, too. The body-in-white is the same as that of the DB11, but the DBS’s large clamshell hood and trunk (bonnet and boot in merry ol’ England) are carbon fiber instead of aluminum. As a result, the body saves 155 pounds. Its fitting name, Superleggera, means light weight in Italian. Wait, I thought this was a British car.

What’s there, however, is beautiful, even the power-folding soft-top that lowers in 14 seconds and raises in 16, both at speeds up to 30 mph. With the sun only getting hotter during the day as the temperature rises to 102 degrees, I take 16 seconds to raise the top and stop making the air conditioner fight the Spanish sun.

The road soon turns twisty and now it’s time to test more of the DBS’s more. Aston Martin calls the DB11 a grand touring car, or GT, but claims the DBS is a super GT. What’s the difference? About 115 hp, 147 pound-feet of torque, bigger wheels and tires, better brakes, and firmer suspension settings.

To be specific, the DBS comes with 21-inch wheels compared to the DB11’s 20s and its tires are 10 mm wider at 265 mm up front and 305 mm in the rear. The tires are also stickier Pirelli P Zeros versus the DB11’s Bridgestone SW007s. Underneath, the springs are 15 percent stiffer, the roll bars are thicker, and the damping is firmer.

With those stats I might have expected a stiff-riding car, but Aston has given the DB11 relaxed enough tuning that the same structure under the DBS can handle bigger tires and a stiffer suspension and still deliver a comfortable ride.

Aston Martin lets drivers have it both ways. Unlike most cars that have programmed drive modes that handle the powertrain and suspension in one shot, the DBS effectively has two drive mode controllers. The button on the right side of the steering wheel cycles through GT, Sport, and Sport+ for the powertrain, and the button on the left side of the wheel does the same for the suspension.

The DBS’s simple but effective double-wishbone front suspension and multi-link rear suspension with adaptive dampers make for a compliant ride in GT mode. The DBS does an especially fine job of handling a cobblestone road, too. Sport is firmer, but not too harsh on these mostly smooth but sometimes archaic roads. Sport+ is best left for the twisties, as it causes undue jittery motions on two-lane highways.

Those cobblestones and a few other bits of broken pavement cause just a hint of structural shake, which is to be expected. Cutting the roof off a body robs it of structural rigidity. Aston added a structural box behind the rear seats to increase torsional stiffness and used beefier side sills to improve bending stiffness, but the Volante loses about 35 percent of the coupe’s rigidity. That’s not bad and it does feel solid, but consistent bumps can show the difference between the two body styles.

In the tight turns, the difference is harder to notice. With its quick 13:1 steering ratio, the DBS bites hard into corners. The additional structure and weight of the roof add about 220 pounds to the Volante, but that only serves to change the coupe’s 51/40 front/rear weight balance to a perfect 50/50. That makes the DBS neutral and predictable through corners, traits that are only aided by the wide and sticky staggered Pirellis. A mechanical locking rear differential helps put the power down coming out of turns without locking too much to fight the car’s ability to turn. Overall, the DBS is nimble, but an electronic locking diff with torque vectoring would make this car even more nimble.

The standard Brembo-sourced carbon-ceramic brakes are large and tuned well. They’re a whopping 16.1 inches up front with 6-piston calipers and 14.2 inches out back with 4-piston pinchers. Aston Martin has worked on the brakes “jump in” point to make them less grabby than on the DBS Superleggera coupe, and that work paid off. I feel a firm, progressive pedal time and time again when slowing for the next bend on roads that are making my passenger carsick. (It’s not me, really.)

As we arrive back at the hotel, the temperature is as hot as it’s been all day, 102 degrees. But this car is hotter. My slightly green friend is right, nobody needs this kind of power, but nobody needs to spend $329,100 for a car either—and that’s before options. When the power is this intoxicating and the lines are this pretty, nobody may need the 2020 Aston Martin DBS Superleggera Volante, but plenty will want it. That’s hot.