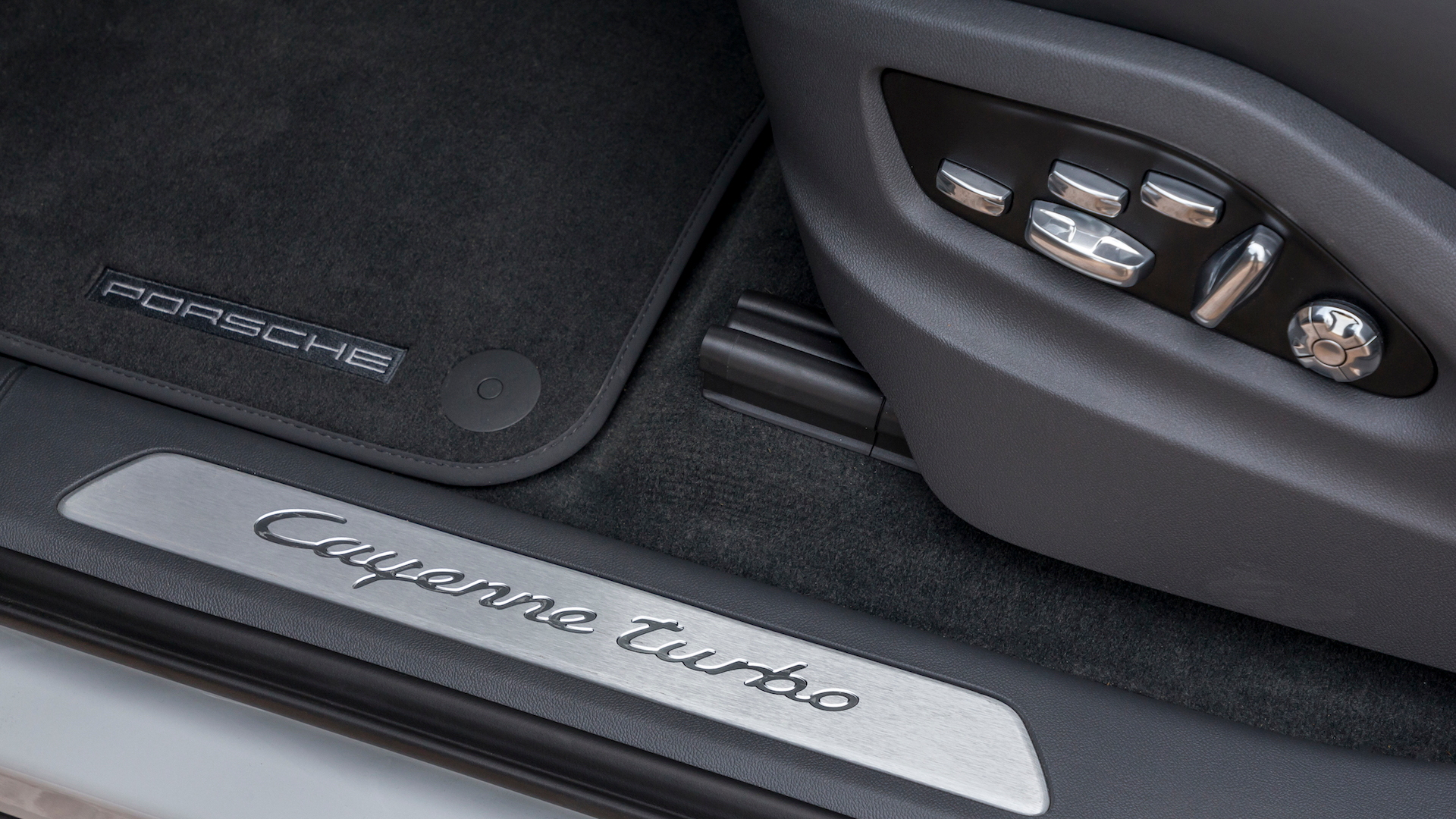 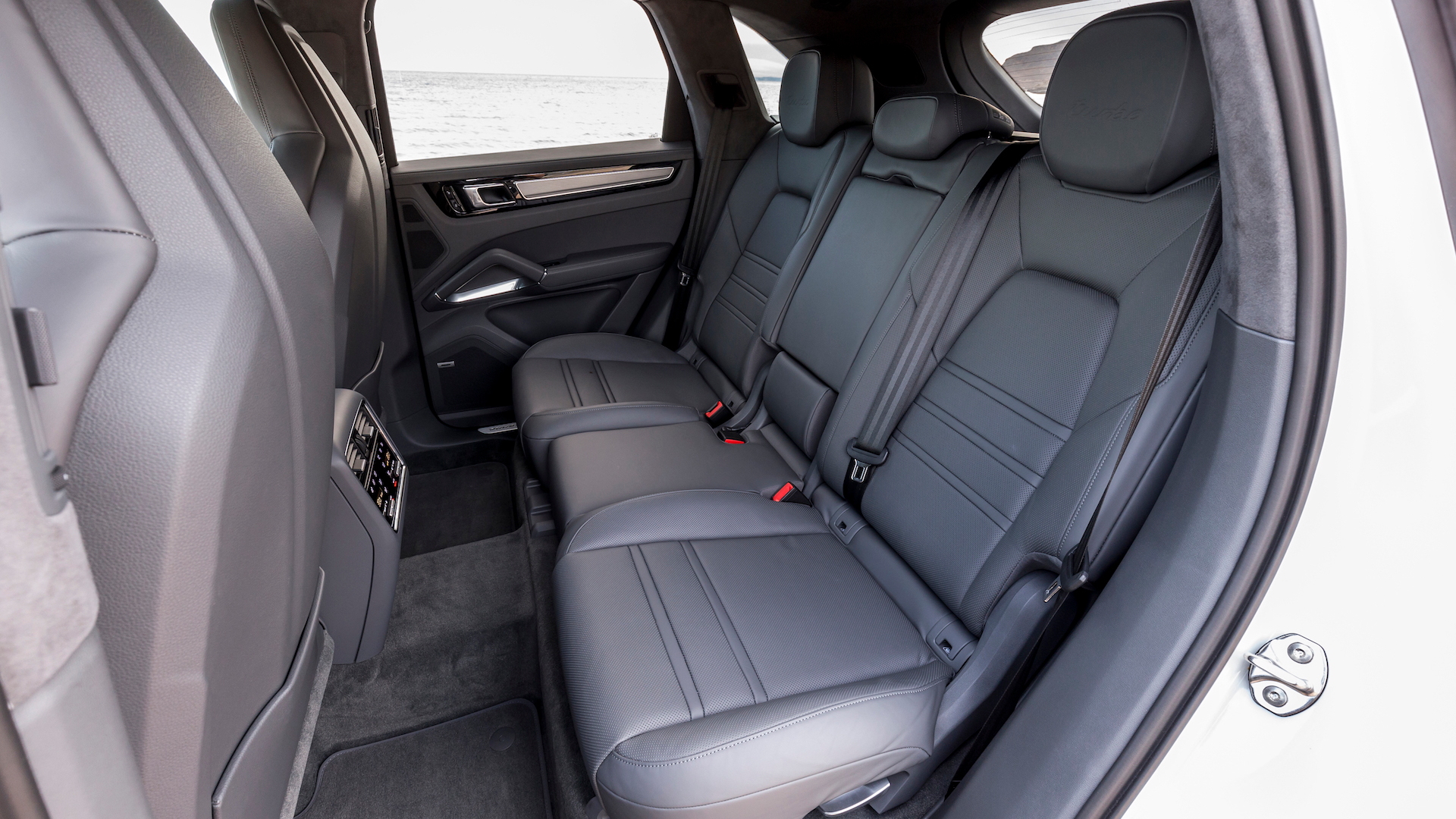 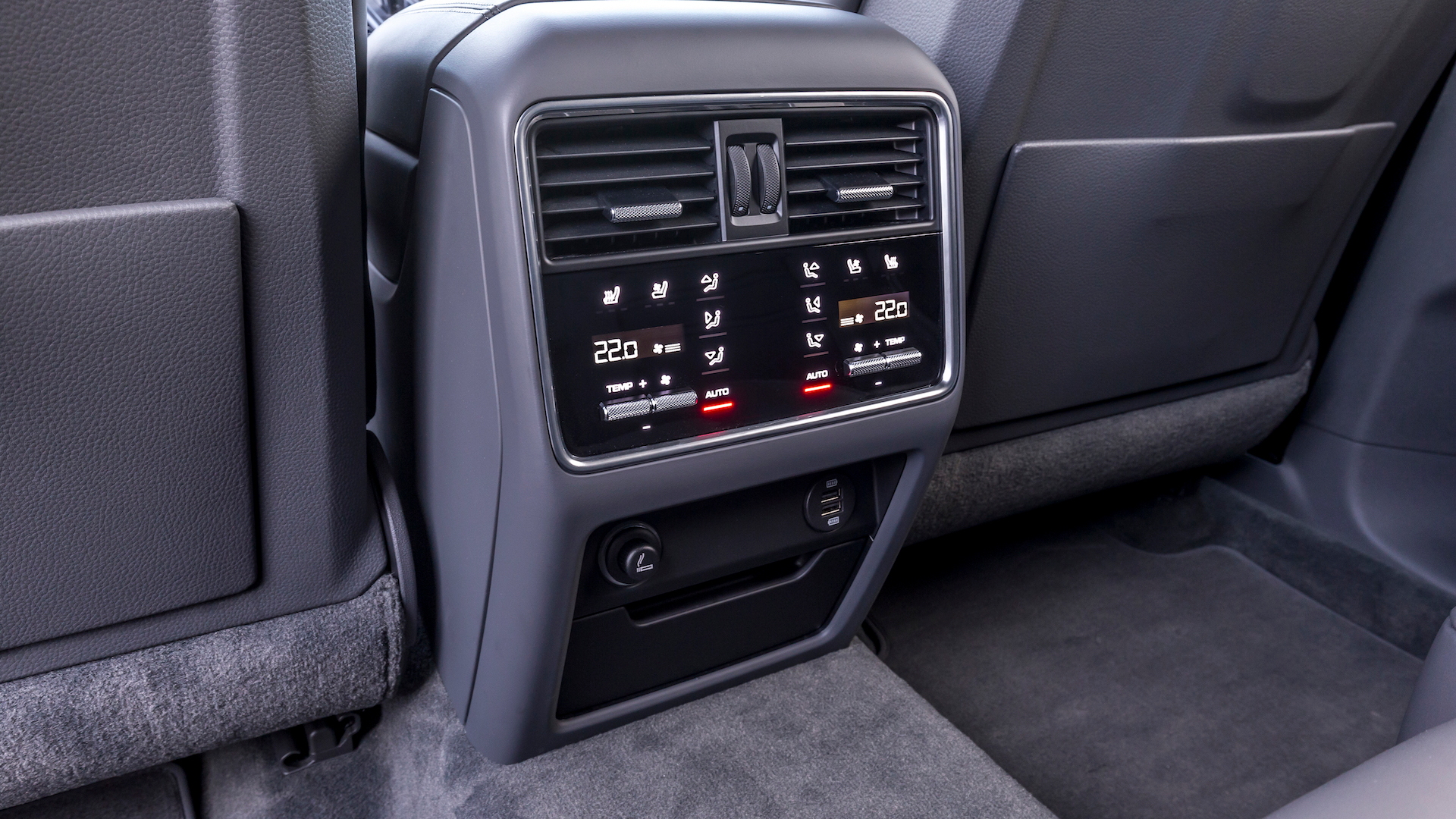 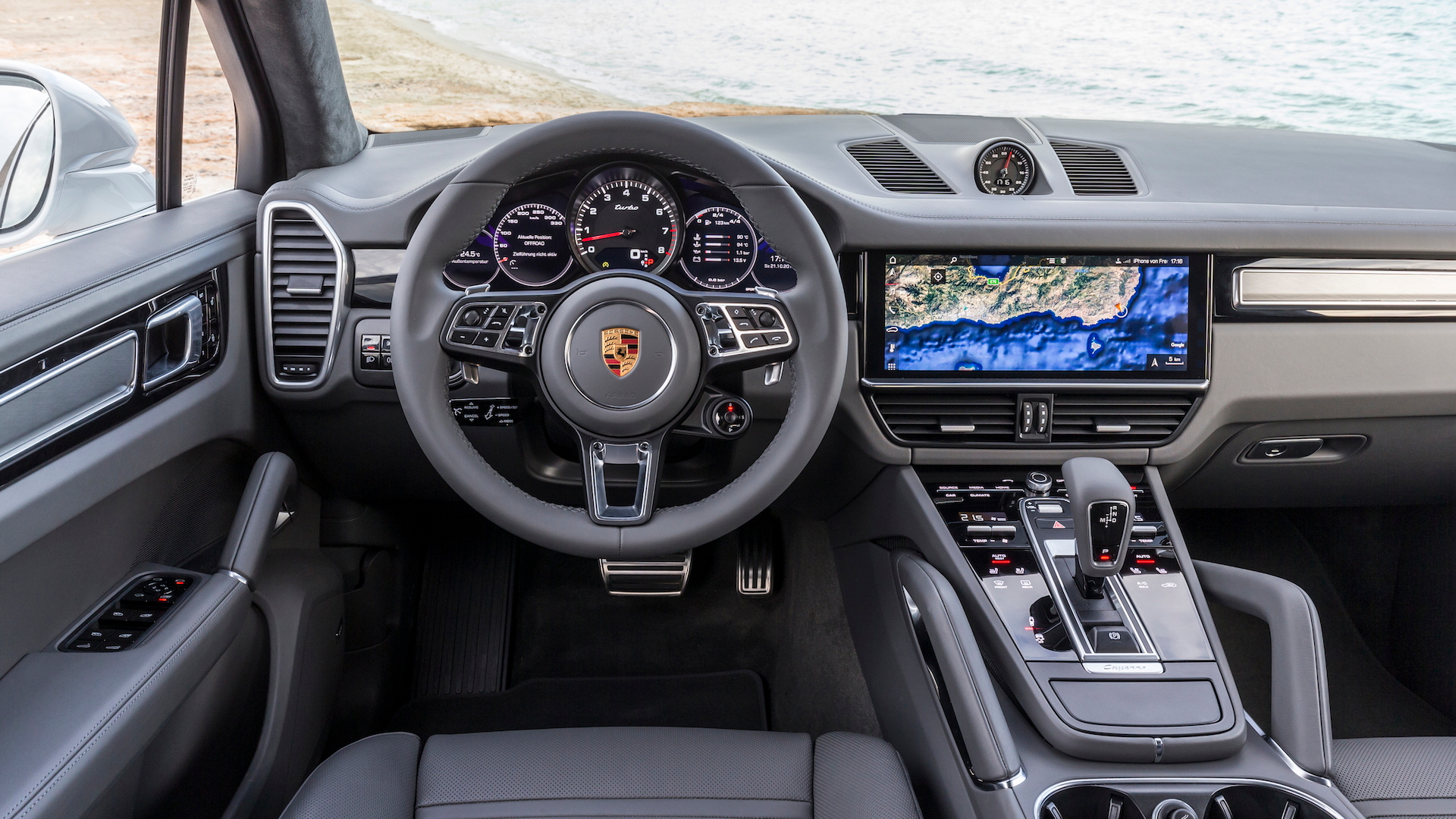 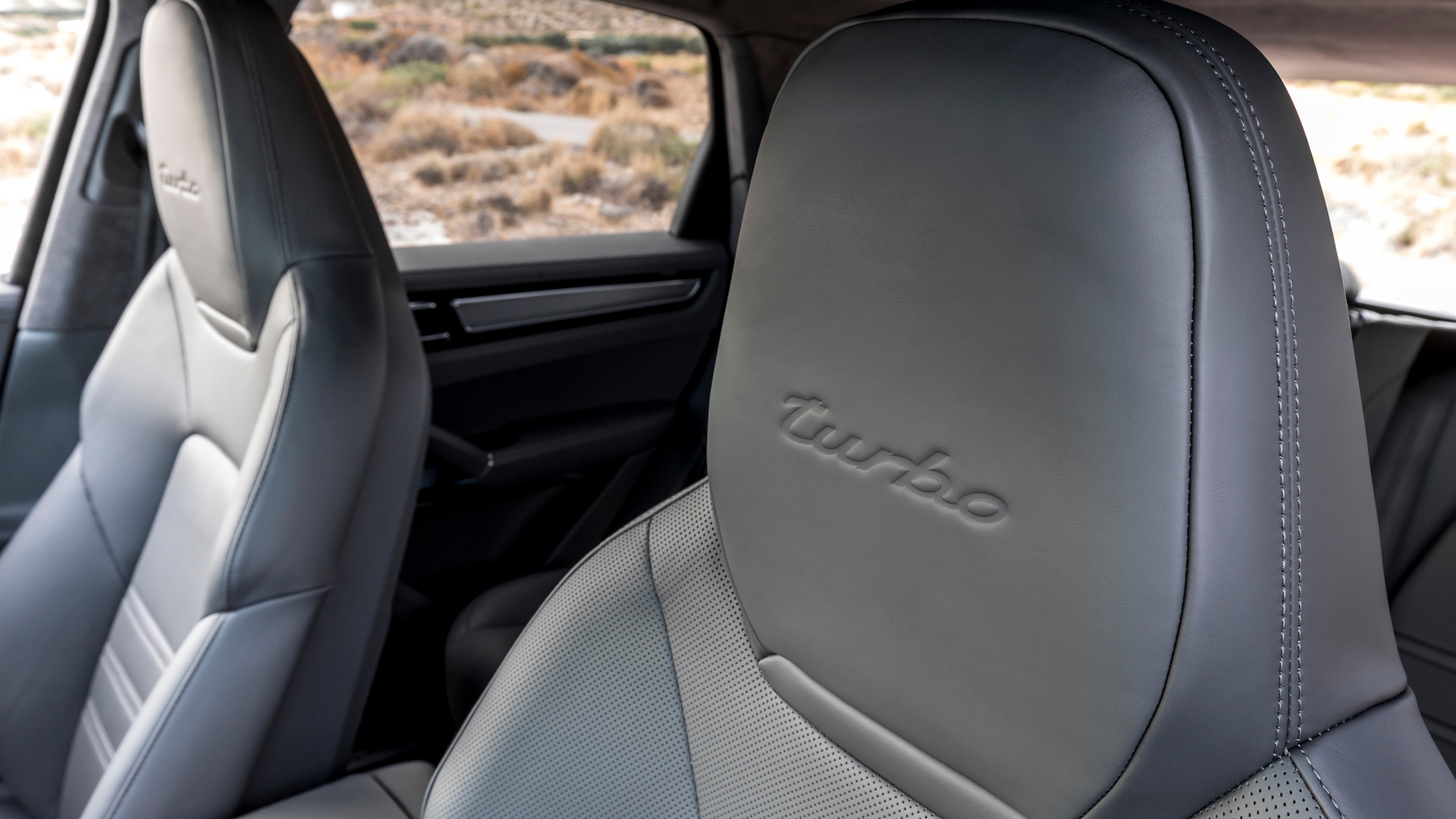 Red Top Mountain State Park has very little red to show for itself these days. The rusty lip that usually rims Lake Allatoona has been reduced to a hairline. A flotilla of powerboats skim the surface of the lake at very high pool in this, the second wettest year ever in north Georgia.

It’s not even 9 a.m. They got here quickly, I think. I got here faster.

Gray car and gray sky made for easy stealth-mode flight from my office, where the 2019 Porsche Cayenne Turbo in the driveway leered at me with its signal-yellow calipers. A better man might have resisted, but as people will tell you, I’m pretty terrible in that regard, and others.

Don’t blame me, blame the 4.0-liter twin-turbo V-8. Whether they’re driven by a turbo-6 or a twin-turbo V-6, the other Cayennes admittedly will bring some milkshakes to some yards. The V-8 Turbo model wails my siren song. It bangs out 541 horsepower while it swells with 567 pound-feet of torque. Finding a blank spot in the powerband is like finding the long-lost last piece of the jigsaw puzzle. It won’t happen. A 0-60 mph jaunt of 3.7 seconds at its best is on tap; so’s a top speed of 177 mph, but this isn’t Germany—or even Berlin, Georgia.

The Turbo delivers the kind of underfoot rocket fuel that will keep gas power relevant for a little while, but the big baked-in bummer is EPA-delivered: 15/19/17 mpg. It has air shutters and stop/start and a more slippery body with an active rear spoiler, but just between us (whispers quietly) it’s a turbo V-8 and weighs 4,795 pounds. Those miserly add-ons are the auto equivalent of Band-Aids on a cracked chest cavity.

The Turbo sorts out its power issues first with an omniscient gearbox. The 8-speed automatic is another of its polished gems. In Normal mode it’s nearly soothing, and needs to be prodded a lot until its reactions get urgent. It blends torque and shifts with Bob Ross smoothness and congeniality. In Sport, it crackles with responsiveness. Paddle down five gears, the Cayenne Turbo doesn’t flinch.

Further downstream the transmission doles out power to all four wheels according to a brainy algorithm that decides how much goes to the front and how much goes to the back. At the back, with the torque-vectoring differential, the Cayenne Turbo then divides its spoils again, constantly, depending on which rear wheel needs more love. Dial through the Sport and Sport+ drive modes and the power sent to the back amps up progressively. It doesn’t throw caution to the wind, not with those thinly sidewalled but generously treaded 21-inch tires. It puts all its chips down on grip—and it hardly ever comes up craps.

How the Cayenne Turbo handles all the power is pretty lyrical, at least if you’re a hybrid engineer/poet. Some other engineer steps in and sweeps much of the stock strut-and-link suspension away, probably titters, then drops in all kinds of expensive and thoughtful hardware: three-way air springs, active roll bars, adaptive dampers, and rear-wheel steering, all in the name of making this long-wheelbase, tall-body wagon act like it’s been to Porsche finishing school. All the bits can be adjusted and tailored with drive modes; with Sport Chrono, the round steering-wheel knob drops personalities from cruisewagen to enraged powerholic.

When we drove it in Greece last year in near-identical spec, the Cayenne Turbo threaded through ruins with grace but with some stiffness that needed a little Bengay. Now on home turf, which being Atlanta is mostly Gay and sometimes Ben, it’s more pleasant. It’s nothing like a somnolent soundproof chamber, but it’s quiet enough when not pressed.

Pressing all the buttons is very on-brand for me, and when I do, the Cayenne Turbo acts like it sees and knows me. The tension in the suspension fits the way it threads through traffic, and blasts off exit ramps. The rear-steer effect cuts through corners more decisively and more precisely. The electric steering nods with a little feedback, enough to keep winding roads a joy instead of a chore. Thank the highway-tax gods and some pay-lane traffic thinning.

I’d think twice about the nearly $10,000 worth of carbon-ceramic brakes. They’re among the least jumpy of their kind, but the action’s still more like a dipole switch than the rheostat action of good iron brakes.

With all that grip on pavement, who’d want to take it off-road? I dial through some red clay left behind after paving the park’s lots—an obvious oversight—and feel no need to lift the Cayenne Turbo from its usual 7.5 inches of ride height to its tall-boy mode of 9.6 inches, or even to fiddle through its drive modes. I’d blanch at the thought of fording through almost 20 inches of water, though it can, or towing up to 7,716 pounds, though it can do that, too. Those talents are aside from the point, like learning that Prince made excellent pancakes.

The Cayenne Turbo’s not so much an SUV as it is a device to hammer out the kinks in the road until they’re flat and straight or at least seem that way, I decide, even if its massive sticky treads become hydroplaning aficionados in pouring rain. As it finally dries out for a few miles, the Cayenne Turbo displays all its wares. It’s fast enough to singe the hair off the bearded grass on the side of the road, quick enough to make the wildflowers wave a breezy goodbye.

The other good stuff

The Cayenne’s almost tamper-proof shape strikes the right balance between wagon and SUV, with the slightest hints of Panamera thrown in because why not. Other SUVs may be faster, but the Cayenne Turbo doesn’t look like a walleye or like it’s been Instagrammed through a Max Headroom filter. Odd wheel lips aside, its wagonlike track suit fits it like a second skin—a human one at that. Inside it’s awash in glossy touchscreens and blessedly few clicky buttons.

Of the other things a Cayenne Turbo can do but ask us if we care, it’s perfectly suited to carry three or four other people, thanks to a long wheelbase and finely stitched and padded seats. The optional sport buckets have heating and cooling and 18 ways of adjustment and can cinch in like a drag queen’s corset. Questions there?

When it’s not toting people, the Cayenne makes short work of hauling home a few tubs of estate sale finds, which is the best-case estate scenario we in the fifth estate can hope for. Cargo space abounds, the console and cupholders are deep, and the smartphone bin’s fitted with a booster that amplifies phone signals, just in case you drive through the equivalent of a Faraday cage.

Like any other Porsche, the Cayenne Turbo comes dressed to kill, in standard features and in its all-you-can-eat options list. For the record, my Cayenne Turbo’s wearing Rhodium Silver with a black interior, rear-axle steering, adaptive suspension, carbon-ceramic brakes, 21-inch RS Spyder Design wheels, Sport Chrono, chalk seat belts, the torque-vectoring rear axle, a head-up display, and a package with LED matrix headlights, cooled front seats, and four-zone climate control. What’s this, a heated steering wheel? Who said the Germans were cold and unfeeling? The base of $125,850 has ballooned to $147,840 but I worry only for those who have to live on the other side of its driver’s side door.

That is no value, in case you’ve been reading our reviews over at The Car Connection. But it is sinfully good at what it does, for what it costs, and it’s a great goal for the upcoming electric Porsches in terms of ride, handling, and road feel.

When you look to the future of Porsche and see the all-electric Taycan pulling up quickly, there’s ample reason to believe it’ll feel a lot like this. The Cayenne Turbo has the resolutely flat cornering and instant-gratification power that feels electric. If the Taycan SUV can feel and sound like this on Porsche’s first try at EVs, plug us in.