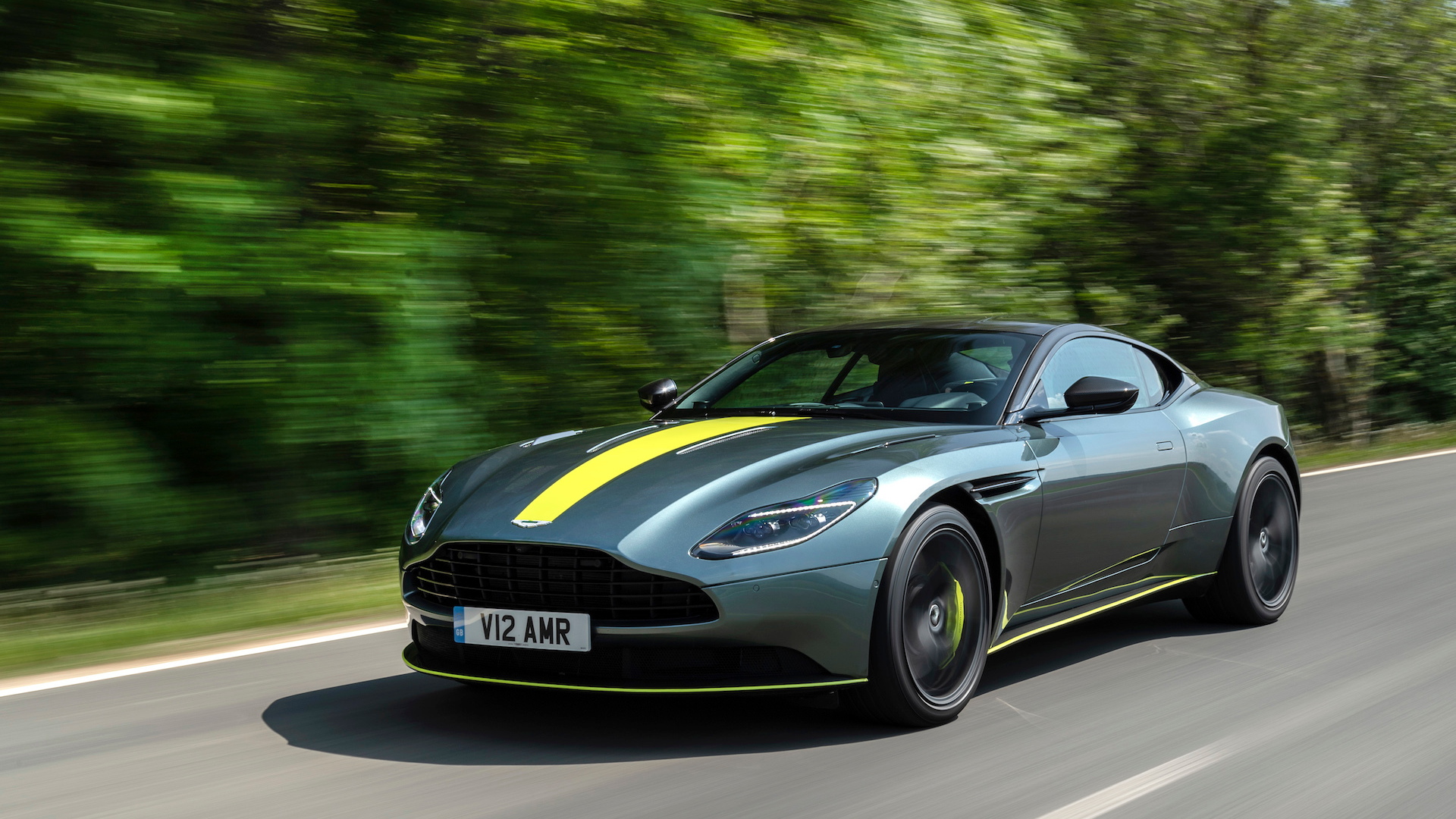 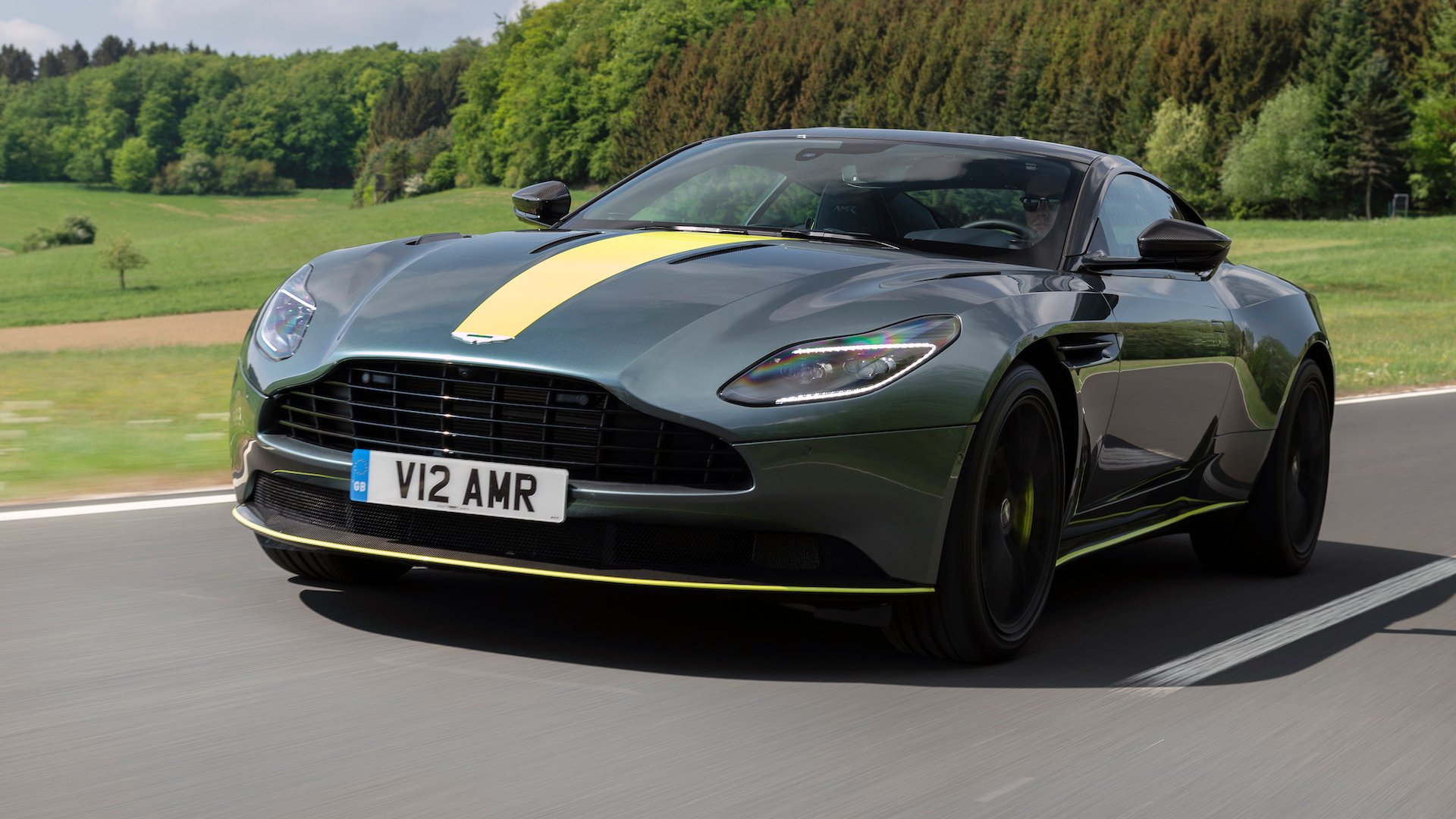 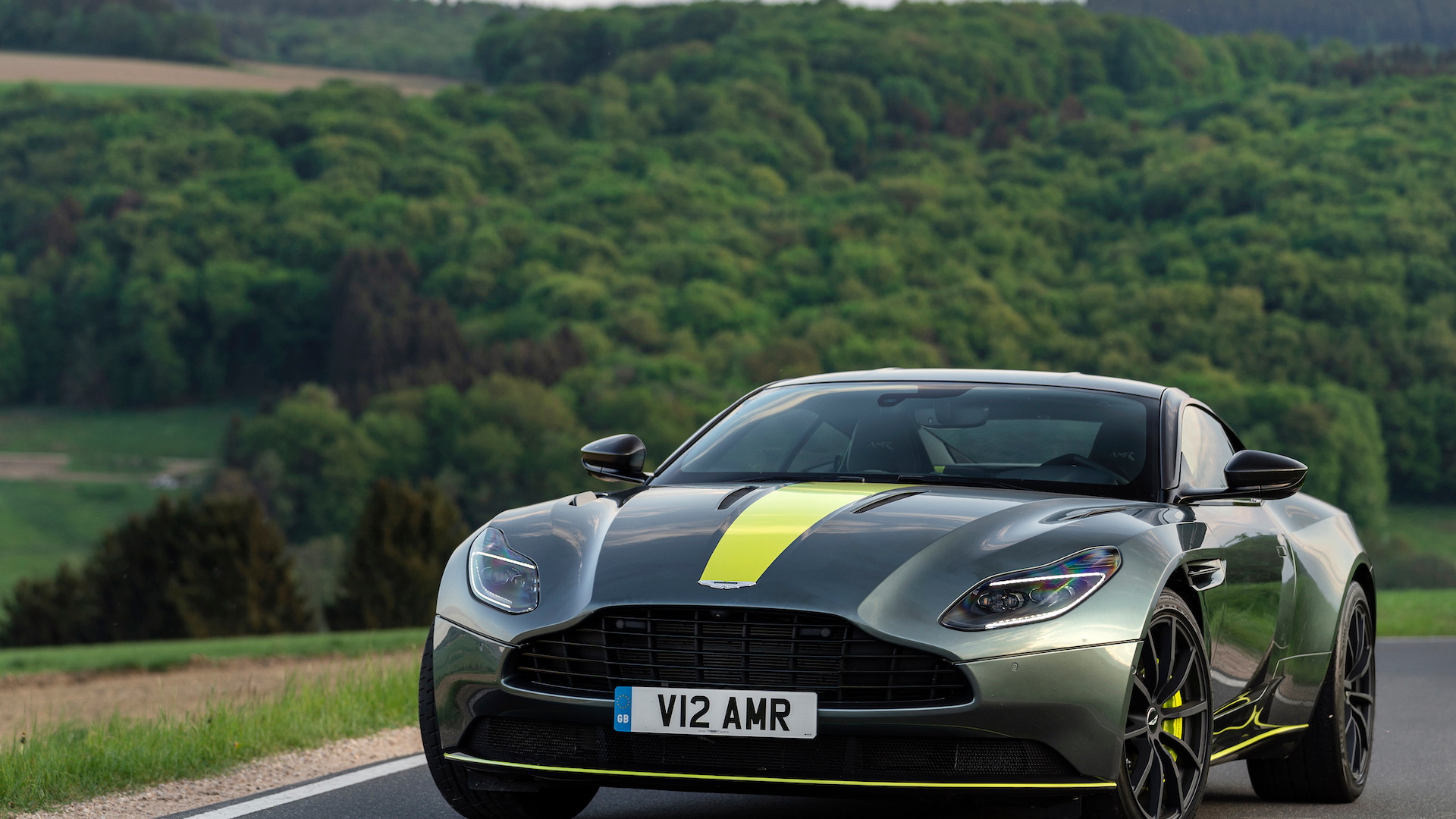 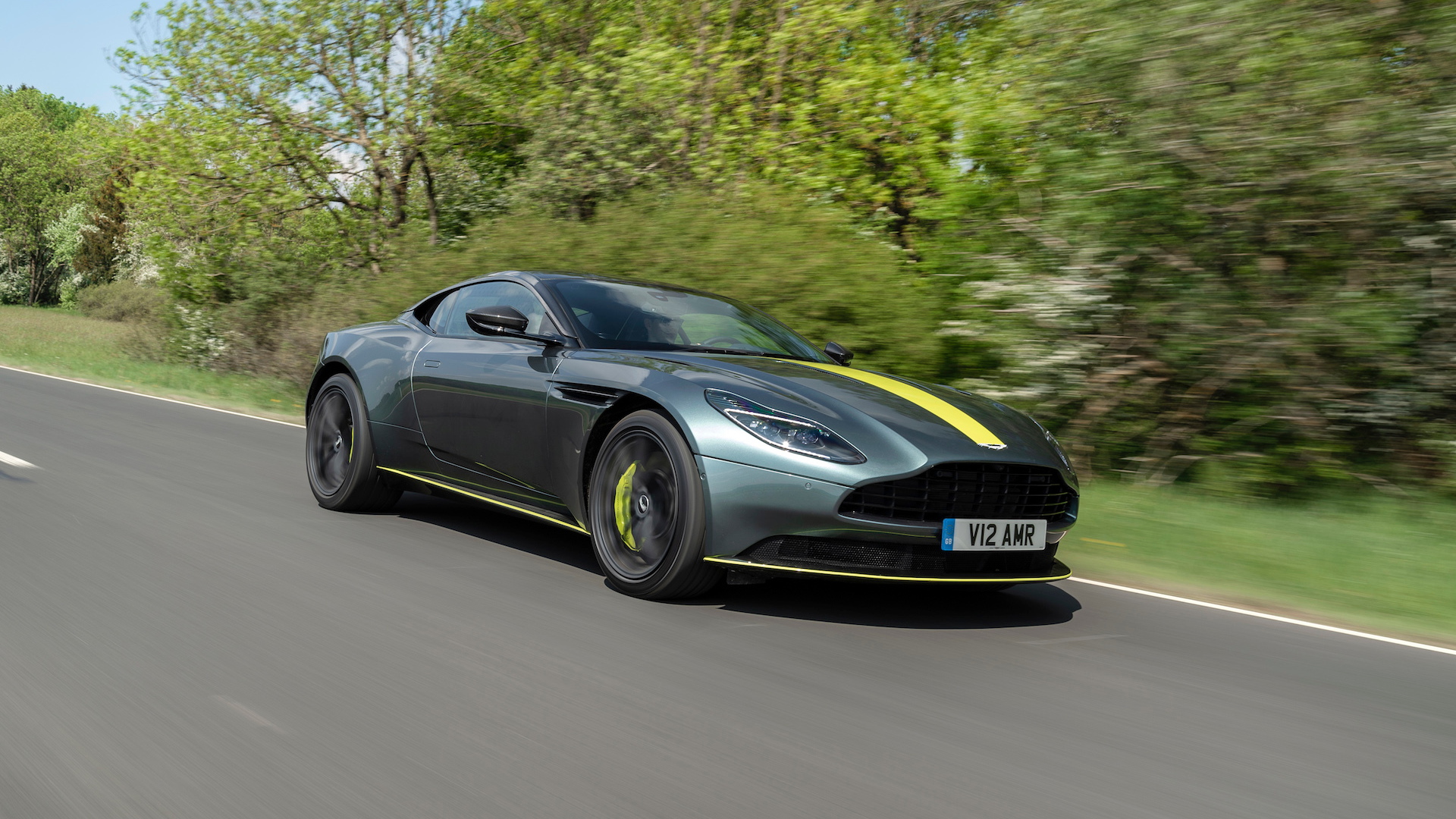 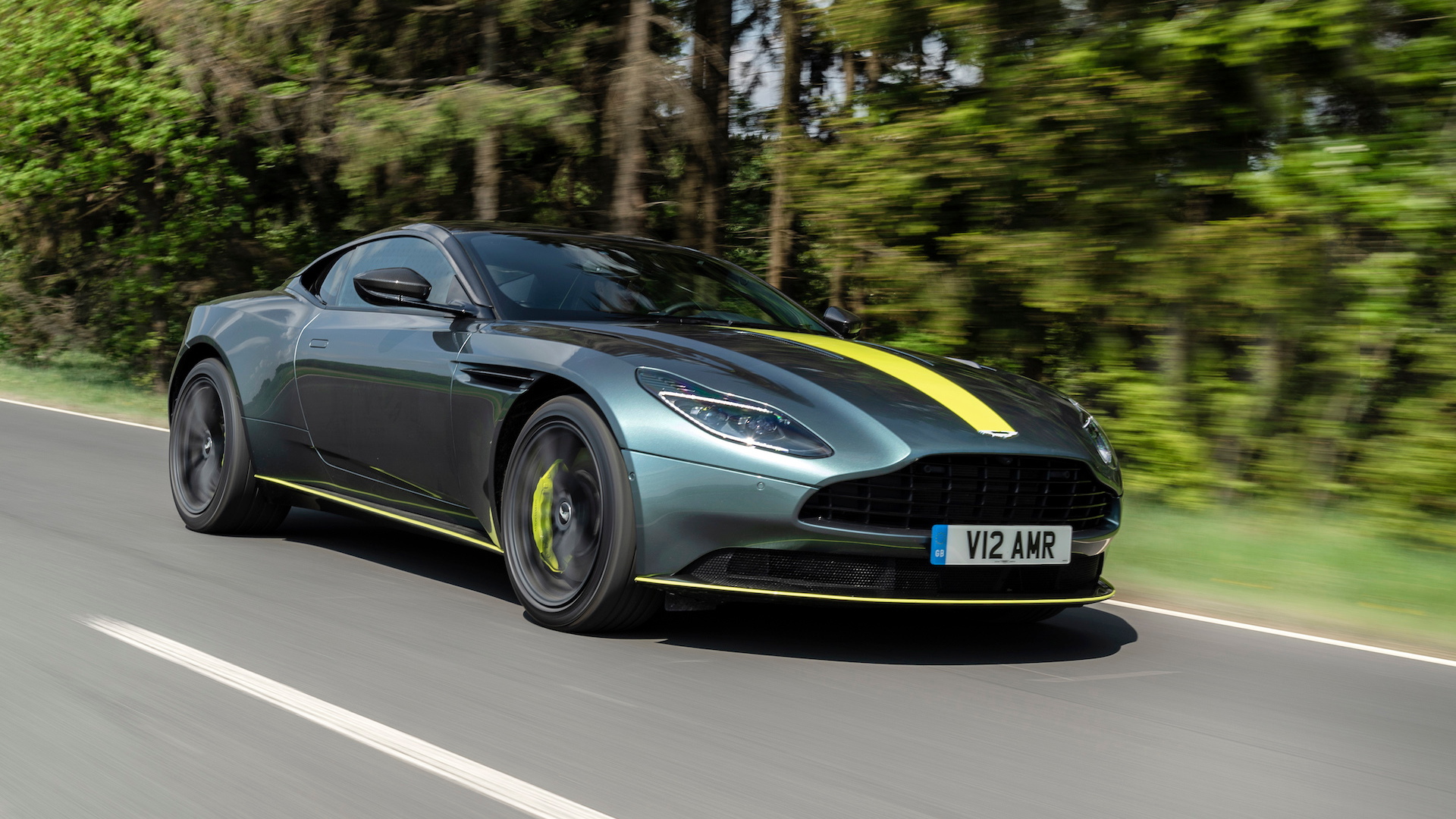 I awaken at the Dorint Hotel on a cool, dewy May morning. The surface of the famed Nürburgring-Nordschleife rests just a few feet outside my window, and it, as well as the plentiful surrounding greenery, is shrouded in a pea soup fog.

Mid-May shouldn’t be this cold. The temperature struggles to hit 50 degrees. In a perfect universe, the sun breaks through the fog so I can test the new top performer in the Aston Martin DB11 range, the 2019 DB11 AMR, on the most revered and challenging racetrack in the world.

Aston Martin didn’t invite journalists here to drive on the ‘Ring. Instead, we’re using the newly inaugurated AMR Performance Center as the base of operations for a drive on local roads. Still cool, but not the drive of my dreams. 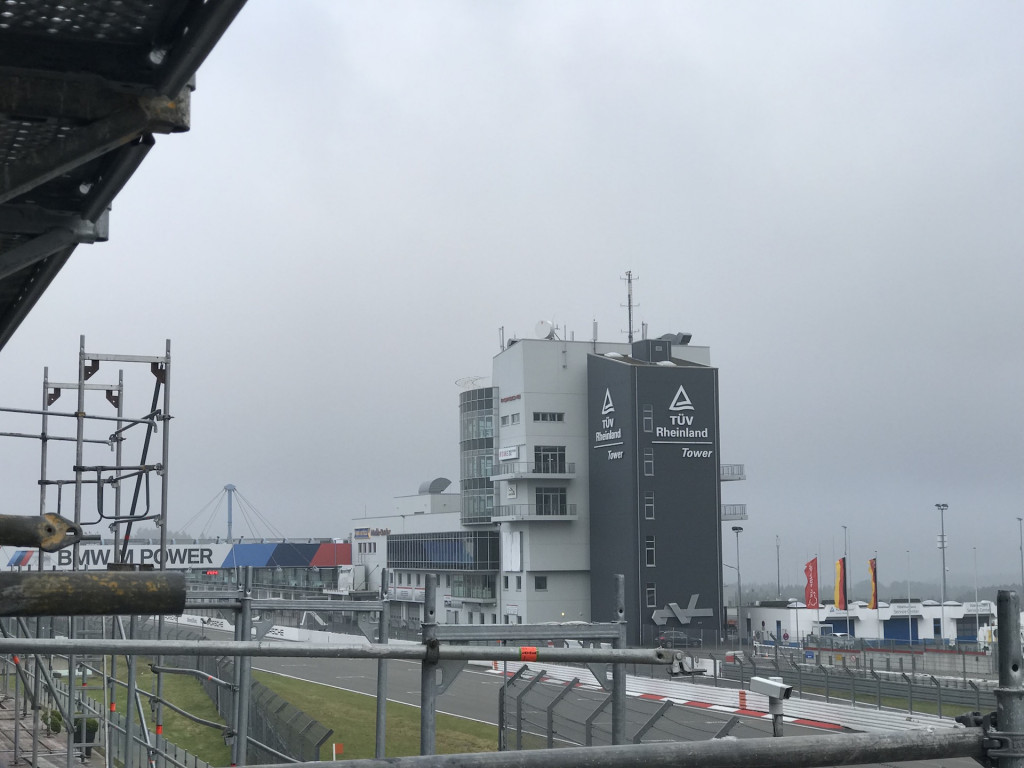 The Nurburgring as viewed from a room in the Dorint Hotel.

“I’d take a DB11 to get to the ‘Ring, then I’d jump in a Vantage to go around the ‘Ring,” Paul Barritt, Aston Martin’s GT vehicle line director, told Motor Authority.

This despite the fact that by applying the AMR badge to the V-12 version of the DB11, Aston Martin is signaling it’s the best performer in the DB11 range.

AMR may stand for Aston Martin Racing, but it doesn’t mean the cars move the needle forward like AMG versions of Mercedes or BMW’s M models. Here, it’s applied to the V-12 version of the DB11 because it’s the fastest version. AMR Pro models will come closer to that mark.

The 2019 DB11 AMR remains a grand tourer meant for gobbling up vast stretches of road, not racetracks. Aston Martin refers to it as “continent-crushing” performance. 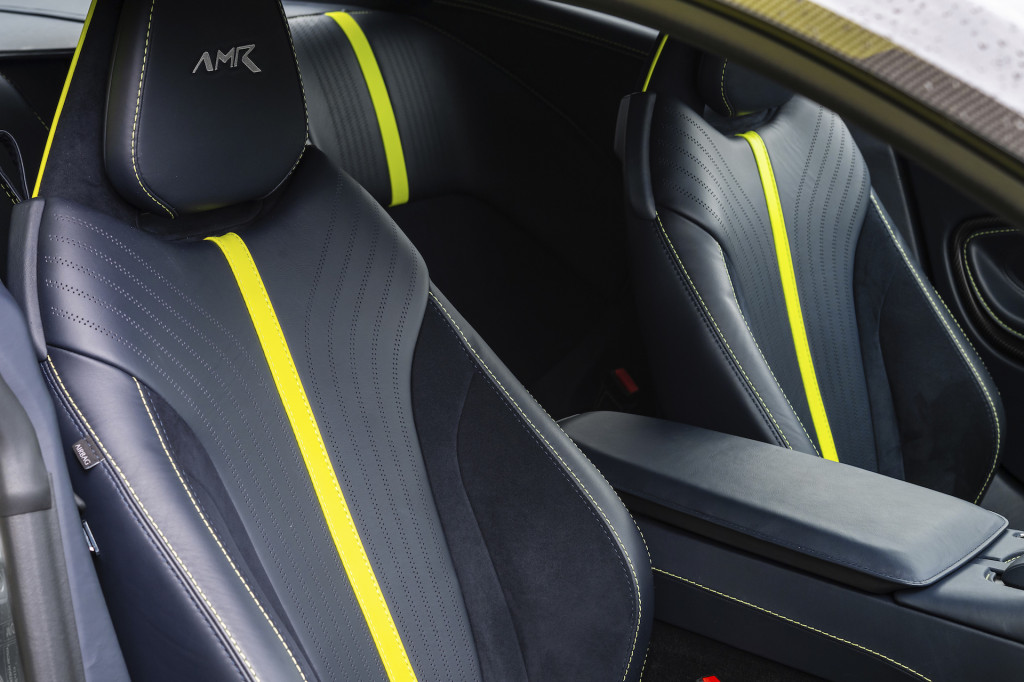 I settle into the new alpha Aston and I’m immediately treated to a sportier experience. I grip a new squared off leather sport steering wheel, and my backside is held more firmly in place thanks to the addition of alcantara patches on the bolsters and seatbacks.

That will all help on the consolation prize that is the local roads in and around the small town of Nürburg. Set among heavily forested, hilly, green terrain, this region is like a mix of upstate New York and the northern, less populated areas of Michigan and Wisconsin…only the roads tend to twist and turn more. I’ll take it.

Aston Martin chose these roads to show off the continuous improvements it has made to the V-12 version of the DB11. That’s impressive because when the company released the car in 2016, it pulled off quite a feat. Aston Martin created a car whose performance and comfort envelopes far exceeded its predecessor.

The roads here wind in and out of small towns, with stints on city streets, country roads, in the hills, and even onto the autobahn.

It’s those twisty bits in the hills where the DB11 AMR shows off its new capabilities. The DB11 was already nimble, but the DB11 AMR takes a more controlled attitude through corners, especially in the Sport and Sport + modes, both of which firm up the adjustable dampers. Instead of falling into what Aston Martin engineers call “diagonal pitch”—squatting in the right rear and raising up at the left front in a left turn, for instance—the DB11 AMR stays flatter, which helps it carve a truer line.

Most drivers will never notice the changes because the differences occur during hard cornering.

Aided by a near-perfect 51/49 front/rear weight balance, it tracks well and rotates willingly through corners. It’s not entirely a sports car, though, as weight transitions in ess turns aren’t always immediate—an effect of the long wheelbase.

That flatter attitude is a result of what the engineers learned while developing the V-8 model. “We’ve created a better V-12-engined DB11, which is only natural through evolutionary process of what you have around you and what other projects you do,” Barritt noted. 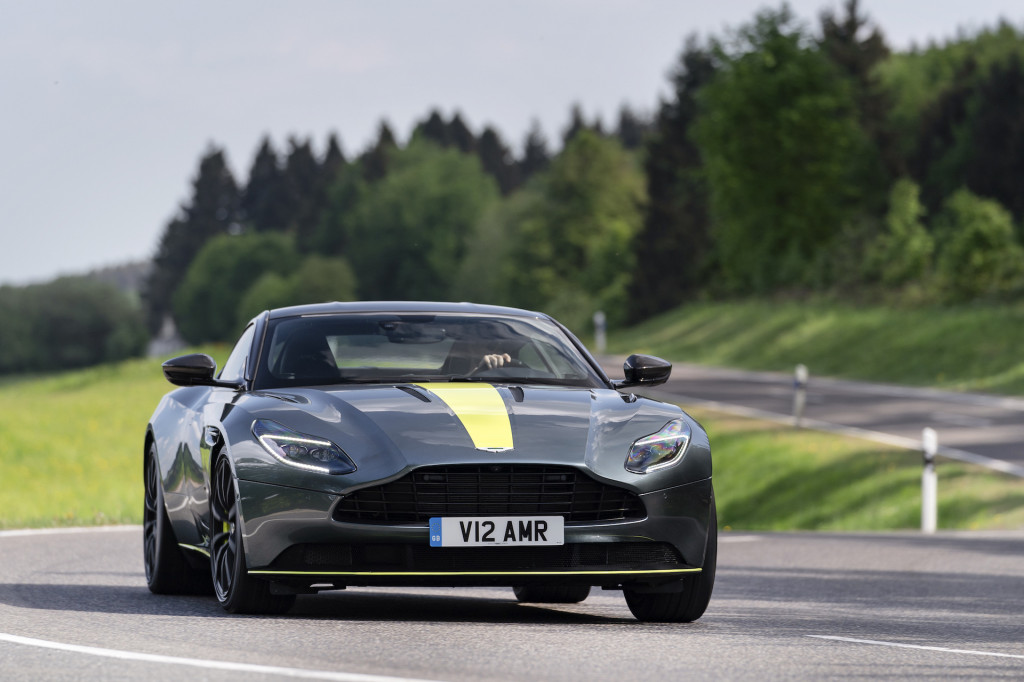 Like on the V-8 model, chief engineer Matt Becker and his team stiffened the rear subframe and control arm bushings to create more lateral stability in the back. They installed firmer adjustable dampers with updated software to create greater differences between the Comfort, Sport, and Sport + modes. To bring the front end and rear end back in sync, Becker’s team adjusted the front with a half-millimeter thicker anti-roll bar.

In addition, engineers modified the mounts for the engine and transmission to prevent lateral movement of the powertrain within the torque tube. This helps the car act as a single, solid unit by limiting the secondary motion of all that mass in turns.

Speaking of mass, Aston switched to forged 20-inch wheels that save 7.7 pounds at each corner.

Aston engineers say the goal was a greater sense of connection without harming the supple ride. For the most part, they accomplished that goal, though the ride does feel firmer without being at all harsh.

An even bigger bark

The V-12 refuses to be overshadowed, though. How could it be? And this version is even better. It lopes along in Comfort mode in these small German towns with a tame demeanor. Go to Sport or Sport +, though, and the beast is unleashed. It gets up and goes from a stop with the tiniest hint of turbo lag and keeps pulling into German-approved triple digits when I get it out onto the autobahn.

The twin-turbocharged 5.2-liter V-12 has been strong from the start, but Aston engineers fiddled with the code to extract even more from it. They unlocked another 30 horsepower to bring the total to 630 British ponies at 6,500 rpm, while torque remains the same at 516 pound-feet from 1,500 to 5,000 rpm. They got the extra power by keeping the turbo boost on longer and adding a bit more at higher rpm. That extra boost up in the rev range pushes the top speed from 200 to 208 mph.

If it was going to be meaner it had to sound meaner, too, which is akin to telling the alpha lion he needs to work on his growl. Aston engineers gave one of the best-sounding, most raucous engines on the market voice lessons by opening up the “Pops and Bangs” program in the Bosch ECU controller, then tuning it for the right Aston Martin sound. 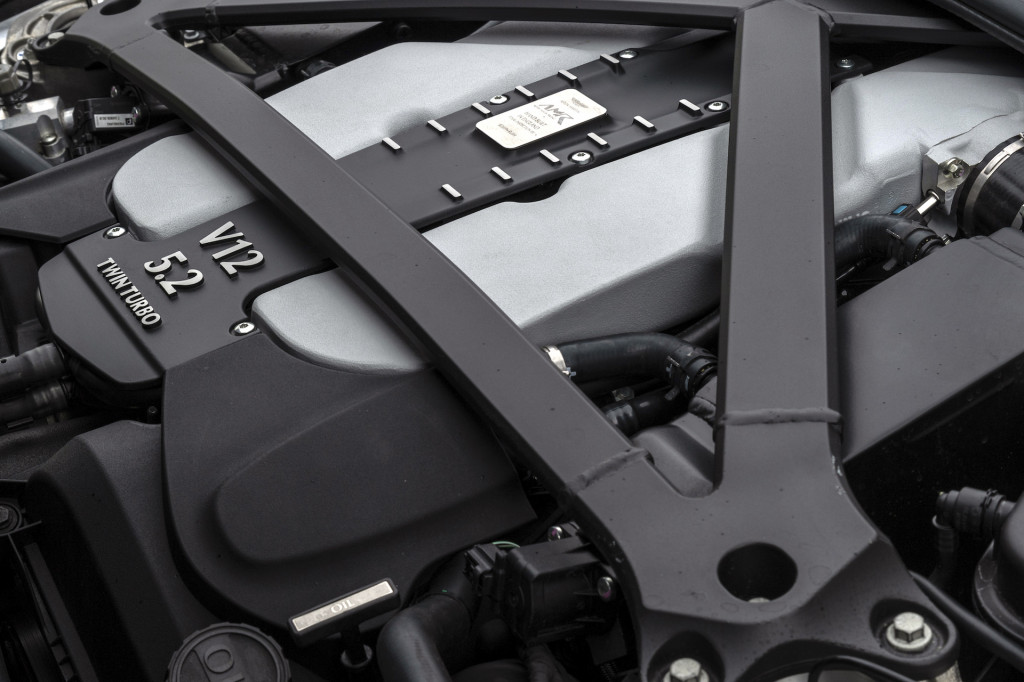 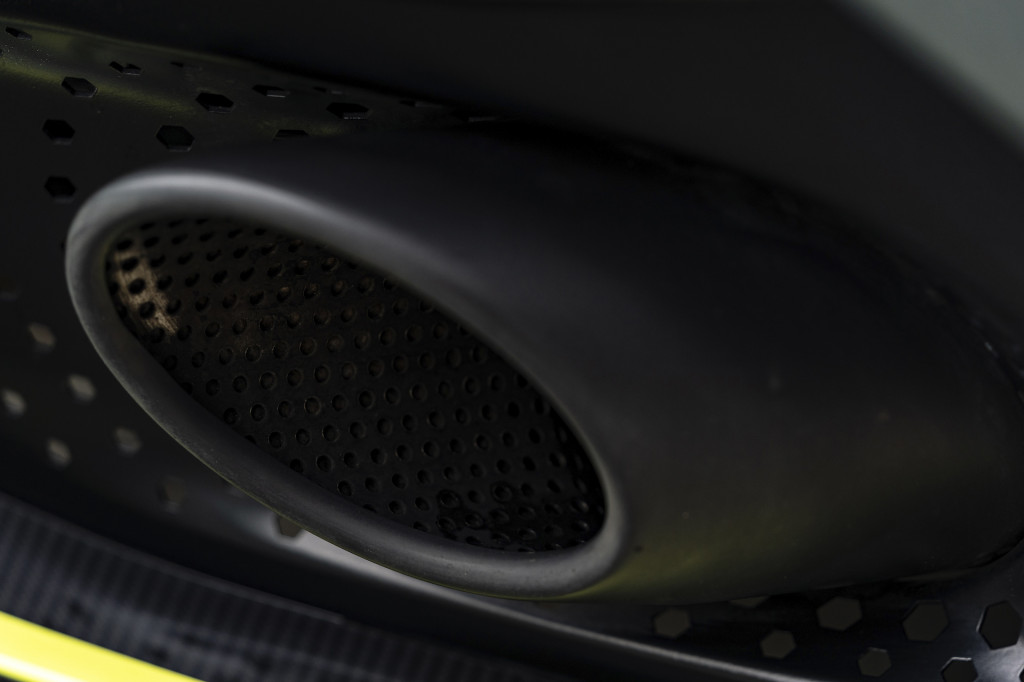 The V-12 burbles at idle, sings in a rich baritone when pushed, and lets out pops and barks on overrun. I found myself stabbing the throttle not so much for the acceleration, but for the sound of the British heavy metal soundtrack emanating from newly blackened exhaust tips. They match the car’s more sinister look that now features darkened or black trim inside and out in place of bright elements.

To wring even more performance out of the DB11, Aston engineers tweaked the code for the ZF 8-speed automatic transmission to make Sport + mode sportier by holding gears longer.

The powertrain work cut 0.2 seconds off the 0-60 mph time, taking it down to 3.5 seconds. It manifests as a kick in the pants as the V-12 causes the DB11 to rear up like a whipped bronco and shoot toward the horizon. It’s a flurry of sound and fury signifying badassery. That extra high-rpm torque is especially thrilling on short stretches of unlimited speed on the autobahn where I reach 145 mph before I have to slow down for slower, more workaday traffic. Wankers. 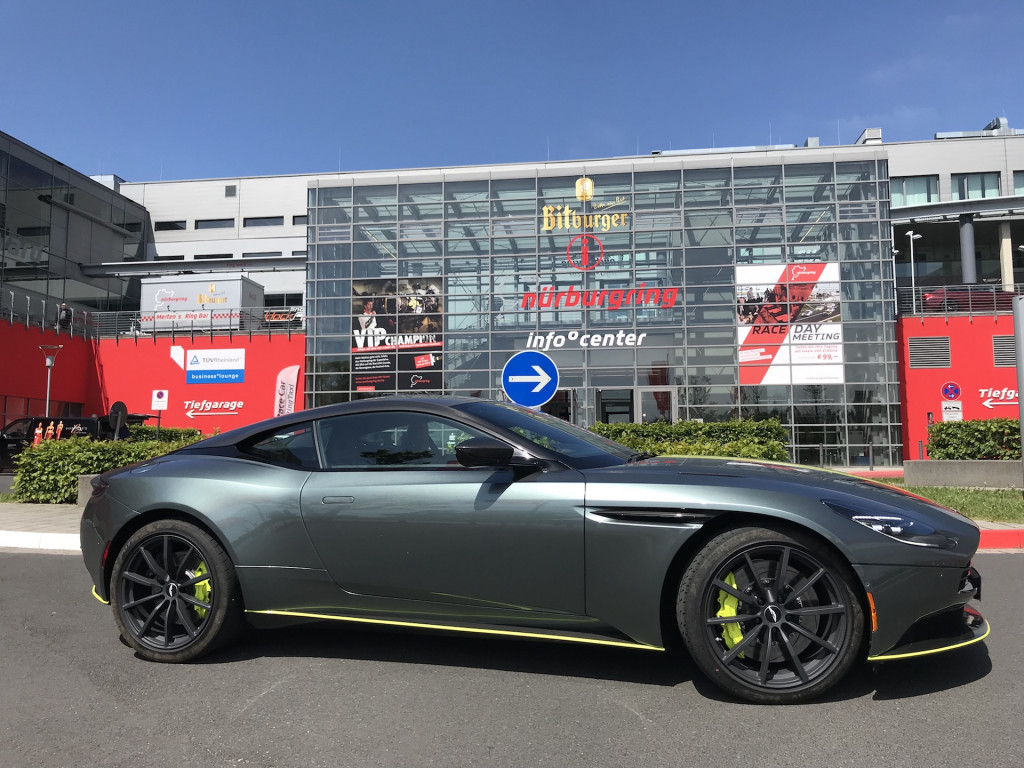 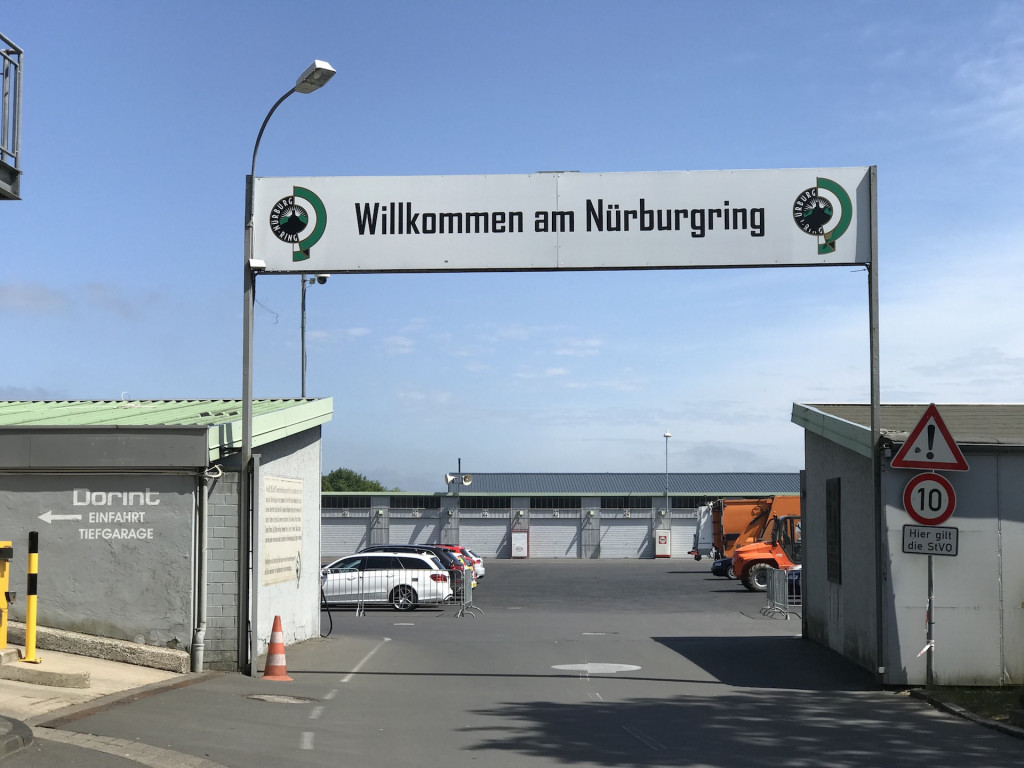 The entrance to The Nurburgring outside the Dorint hotel. It beckons.

But the ‘Ring is right there

The drive ends where it began: at the AMR Performance Center. The route takes us past the Dorint and the entrance to the Nürburgring, and I can’t help but stop to get pictures of the car at the Nürburgring Info Center.

The 2019 Aston Martin DB11 AMR may be the best grand tourer in the company’s lineup, but with its big brakes, sophisticated aerodynamics, and the changes made for 2019, it can almost certainly handle the Nürburgring.

“The DB11 is competent around there (the ‘Ring) but it is the GT of the range and it’s very much about the long journey, the cross-continental cruising. The Vantage is all about sports,” Barritt explained.