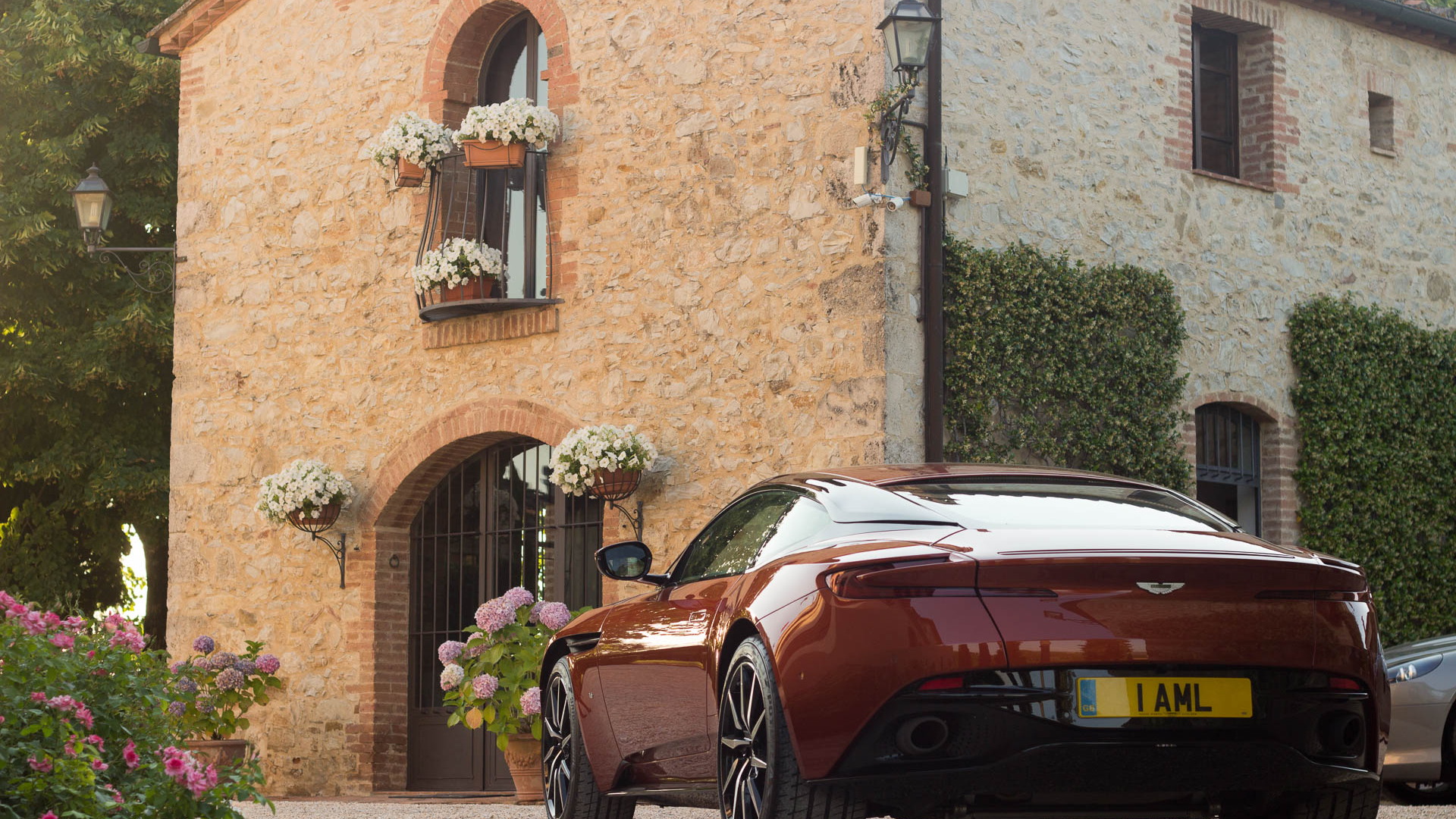 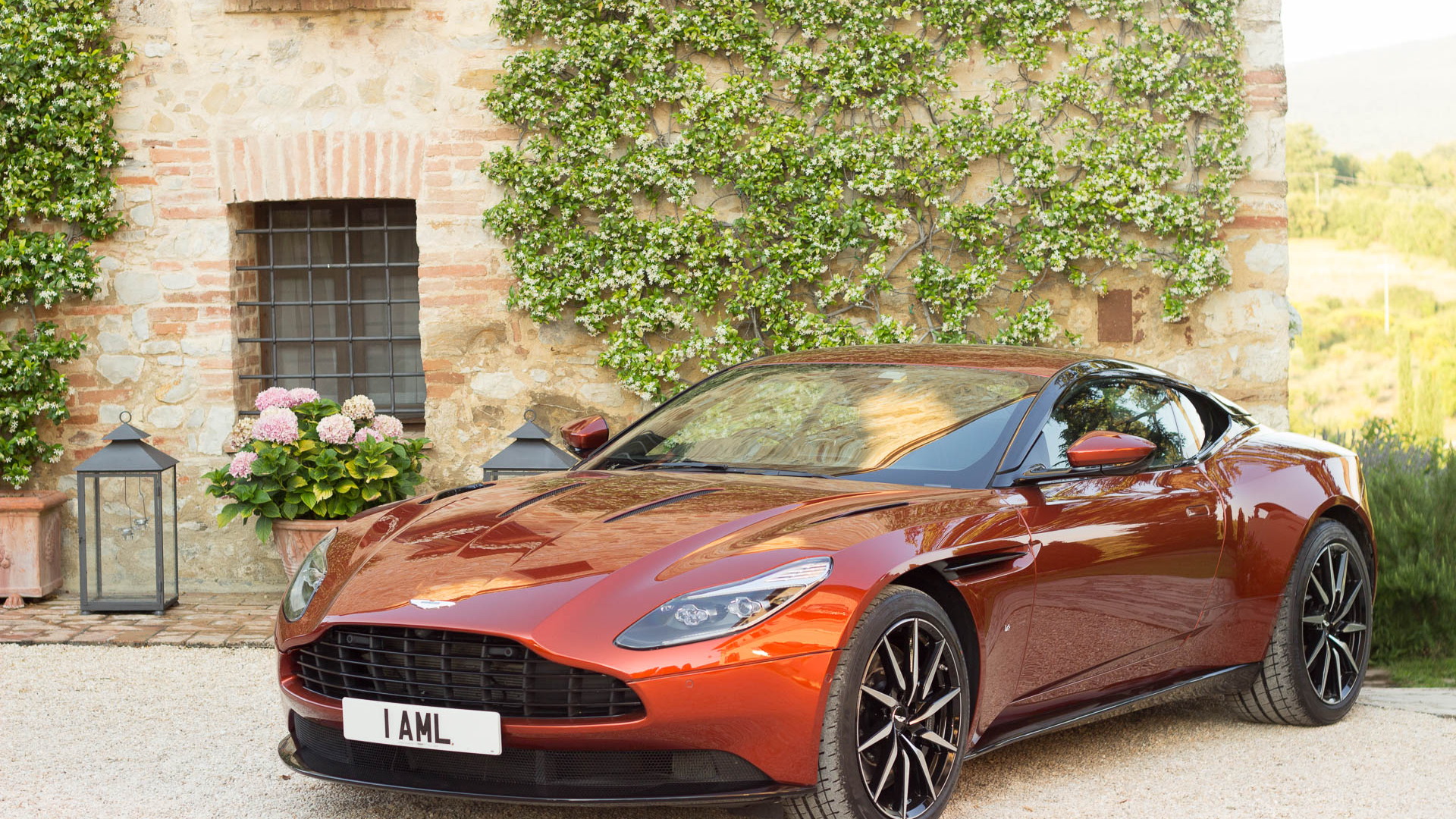 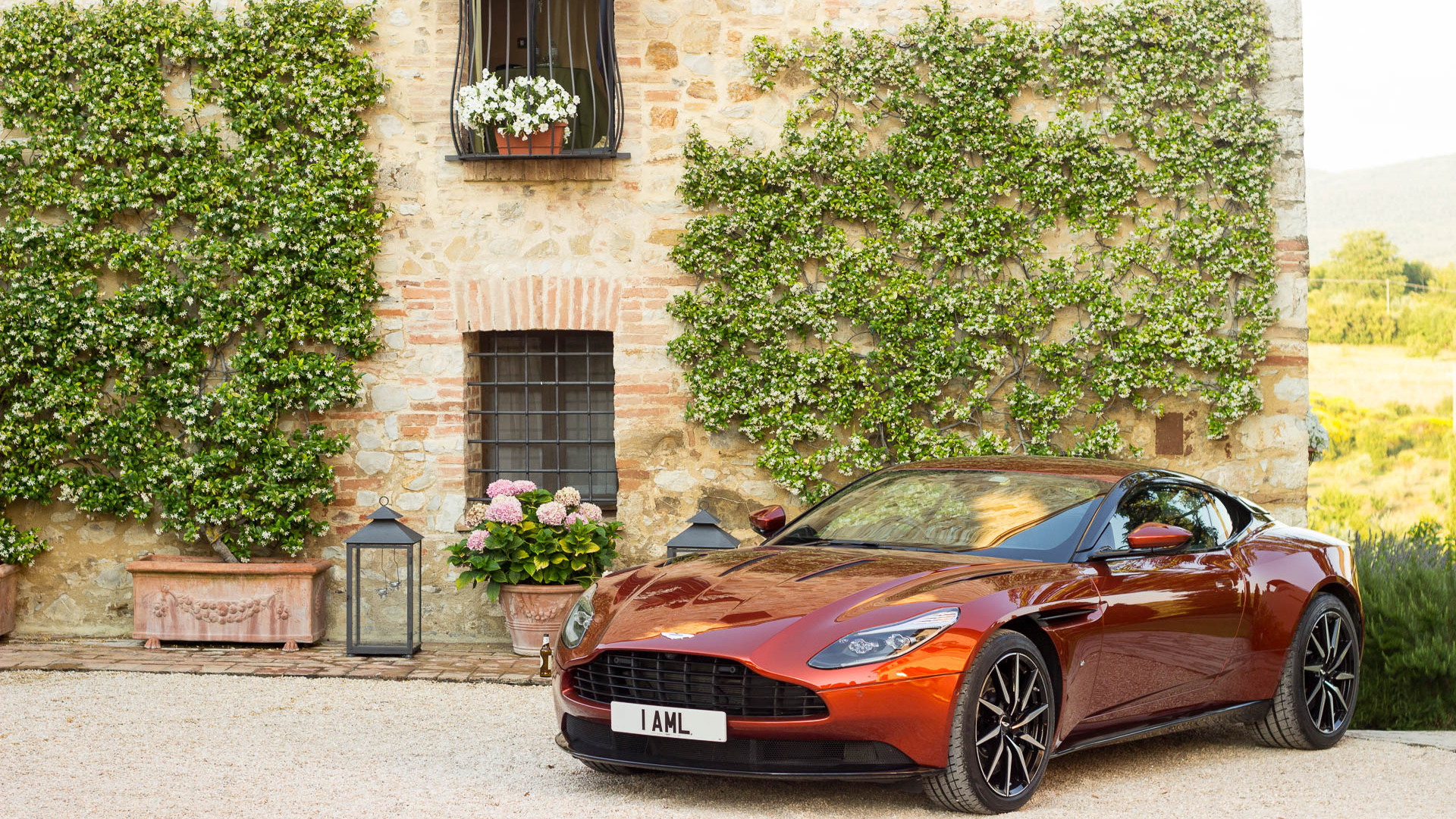 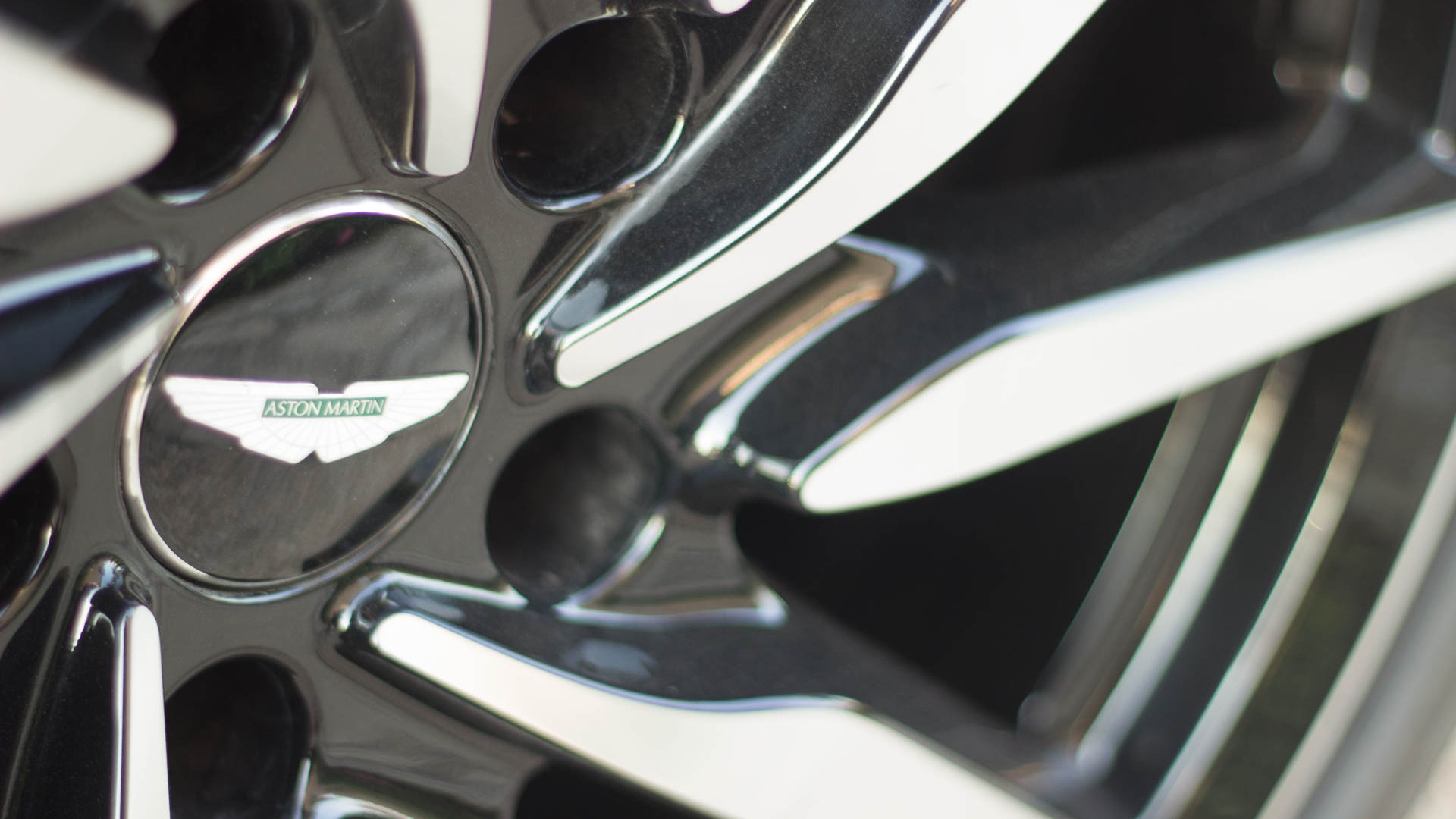 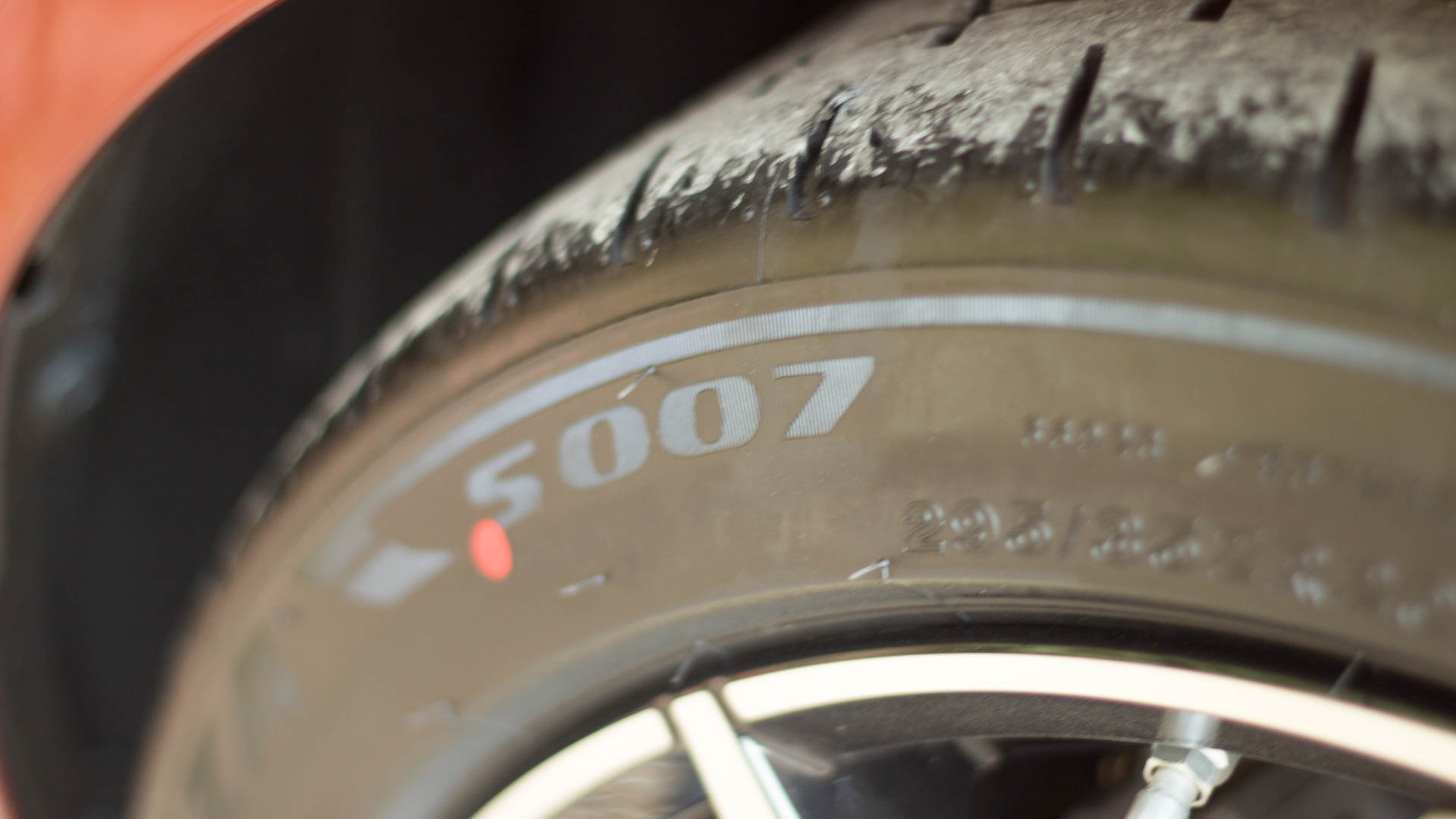 Aston Martin turned out garage rock and roll for decades.

Of course, the small British carbuilder got some big help from deep-pocketed benefactors who tried every way to Sunday to turn a profit. They failed.

But the sound from the factory at Gaydon has always been raw, reckless, and—excuse the metaphor—a little low budget.

The way we hear it, the 2017 Aston Martin DB11 is the automaker's big-budget record.

The DB11 exists right now because Aston Martin needs a fingerhold to climb the mountain of profitability. It's the first up in a four-car plan that'll eventually include a crossover, a new sports car, a Lagonda sedan, and probably another exotic. The business case for the hyper-exotics—like the Vulcan and soon-to-be-named-something-else AM-RB 001—is plain, straightforward, and wildly profitable. Crossovers sell themselves. This new grand-touring DB11 had better be good—the guys in accounting are planning on it.

MORE: Read seven reasons why the 2017 Aston Martin DB11 is still a Bond car you can buy

Aston Martin CEO Andy Palmer told us in Italy last month that this car—and the next three for Aston Martin—are already paid for and that they are the most important in the brand's 107-year history. Investors have cut a check for the automaker’s next four cars. Even if profitability isn’t in the company’s history, at least it has a future.

In that way, the DB11 reads like an album filled with singles: a new 5.2-liter twin-turbocharged V-12, new body and frame, beautifully crafted interior, active aerodynamics, and a sound to die for.

All the hits are here.

Like any supercar, the DB11 is a statement of style first, but its classic proportions are almost immediately lost in the newly creased bodywork.

Compared to the outgoing DB9 that it replaces, the DB11 is more sculpted; a defined character line circumnavigates the car from one front wheel arch, over the rear haunches, around its tail and back up to the opposite front wheel. Aston Martin chief designer Marek Reichmann planned it that way—that beltline is two-thirds of the car's overall height, and punctuates the golden proportion used throughout the car. That subtlety is hard to spot, but too beautiful to ignore.

Its differences are more acute from the rear. LED taillights boomerang around the trunk, and take eyes away from the matte black twin tailpipes machine-gunning the DB11's soundtrack into the rolling hills of Tuscany. We're not complaining about either one.

Its signature styling element may get lost on most who see the car for the first time too; the DB11's hood is one of the single largest pieces of rolled aluminum ever produced. Reichmann said the car company searched for a supplier for seven months, then worked many months more to craft the hood in a way that would eliminate shunt lines and unnecessary angles. It's breathtaking in execution—even more so when the clamshell raises to reveal the massive engine underneath. (I haven't looked at a hood in the same way since.)

(In a land full of Ferraris and Lamborghinis blasting the autostrada, the DB11 turns heads. That's saying something.)

There is function in the DB11's form. Up front, the low hood line and chin keep the car lower to the ground, but a larger grille than on the DB9 directs cooling for the engine, which is firmly planted behind the front wheels this time.

Strakes from the front wheel help deflect high pressure from the tires—they're not just cool-looking design elements—and those deep inlets around the rear windows? Those are functional too. They help direct air into the DB11's AeroBlade, which ports that air up through the decklid to create a "virtual spoiler" (it's actually closer to a Kammback) to efficiently move air from off the tail.

The DB11's style is completely self-serving. And for that, it's definitively art.

The new body alone would go a long way in justifying the six-figure price: the new twin-turbocharged 5.2-liter V-12 doubles down on that argument.

The new engine is also 10 pounds lighter, more compact and busier than the outgoing engine it replaces without losing the soundtrack. Set deeper behind the front wheels by 3.3 inches (two of the DB9's cylinders technically hung over the front wheels), the 5.2-liter shifts its power through a ZF 8-speed automatic on toward the rear wheels. There's no lag in the driveline in sport settings—power is immediate and aggressive. The DB11 doesn't hesitate to immediately rifle down four gears—from seventh to third—and increase heart rates by 40 bpm.

The DB11 is on a mission in the Italian countryside, blasting side roads with verve and enthusiasm, without a hint of understeer and enough power underfoot to make instant, life-altering decisions. Aston Martin says it respects the maturity of its drivers—600 hp is blind faith.

And yet, blitzing these turns wrong. The 8-speed is eager to keep the V-12 under 2,000 rpm, and the 600 horses are available—but not necessary.

The DB11's overall frame is 85 pounds lighter and 15 percent stiffer, but the adaptive Bilstein dampers negate pains from those gains. Settled into comfort settings, the DB11 soaks up the road and vanishes toward the horizon at triple-digit speeds.

Like a lot of U.S. highways, the Italian autostrada can be boring, pencil-straight, a lot like Louisiana with a hill country. The DB11 doesn't want to disappear here, and it can't. Dominating the roads at extra-highway speeds is preferred, though there's some road noise coming from its Corvette-sized Bridgestone rubber and wind whistling off the mirrors. Press it into triple digits and the DB11's rear gets a little light—even the AeroBlade gets help from a Gurney flap that raises up, but that's not enough to settle it down.

What the DB9 lacked in interior refinement, the DB11 more than makes up for. If the DB11’s exterior is drool-worthy, its interior is slobber knocking.

Designers note that the DB11's cockpit is a bespoke effort—aside from the cribbed Mercedes-Benz infotainment system (M-B owns about 5 percent of Aston Martin, and their partnership will likely develop further with V-8-powered sportscars) nothing feels bolted in.

That bolted-in feeling of the DB9 cramped its seating area, and wrapped the driver in too much black leather. By comparison, the DB11's cockpit feels more open and inviting. Stippled leather on the doors and headliner may be a bit too busy for our liking, but it doesn't feel any less luxurious.

A large tach takes center stage in the instrument cluster that is bookended by a speedo on one side and customizable information screens on the other. This is the one place we wish Aston would have carried over parts from the DB9—opposing tach and speed needles are still beautiful.

The glass, dash-mounted ignition button and gear selector are in the DB11 and depress with a satisfying mechanical tactile feeling. Machined metal paddle shifters mounted on the steering wheel click through gears and driver controls are comfortably placed near the driver's thumbs. There's no manettino switch, settings for the adjustable dampers and throttle mapping are placed at 9- and 3-o'clock positions on the DB11's steering wheel, but clumsy digits can roll through the volume and tracking roller switches to get there.

We have quibbles: We could do without the flip-flopped pinch-spread finger movements of the infotainment system. Mercedes' infotainment has its own gremlins to bear, and reversing the controls doesn't help.

Agita aside, for the DB11, Aston engineers say they developed a "sonic profile" specifically for that car that would separate it from others in the lineup. Everything from door chimes and seat belt alerts to the conditioned leather has been engineered for a specific sound profile. The exhaust note can be baffled at startup to keep neighbors happy, or opened at full song to keep drivers happy.

It's not lip-service, the Aston Martin sounds magnificent and unique in every way (although the Bang and Olufsen tweeters rising from the dash is a little excessive) adds up to a big-budget sound from a little carmaker.

Some of its polish necessary for Aston to keep its brand afloat for the next century. Some of it is excessive, like when garage goes glam.

But the sound from those Aston Martin twin tailpipes—that'll always be rock and roll.

Aston Martin provided travel and accommodations to Internet Brands Automotive to bring you this firsthand report.