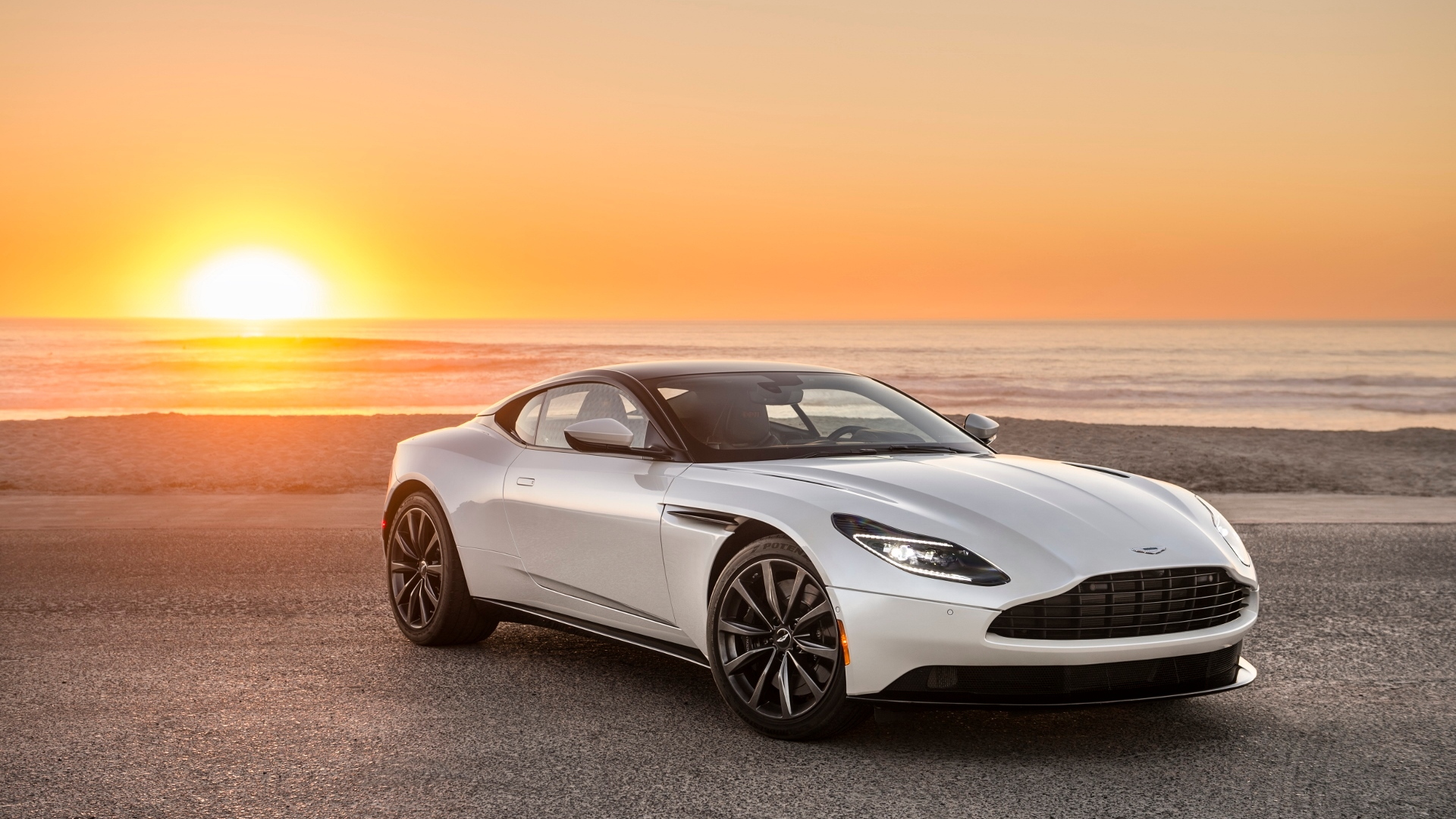 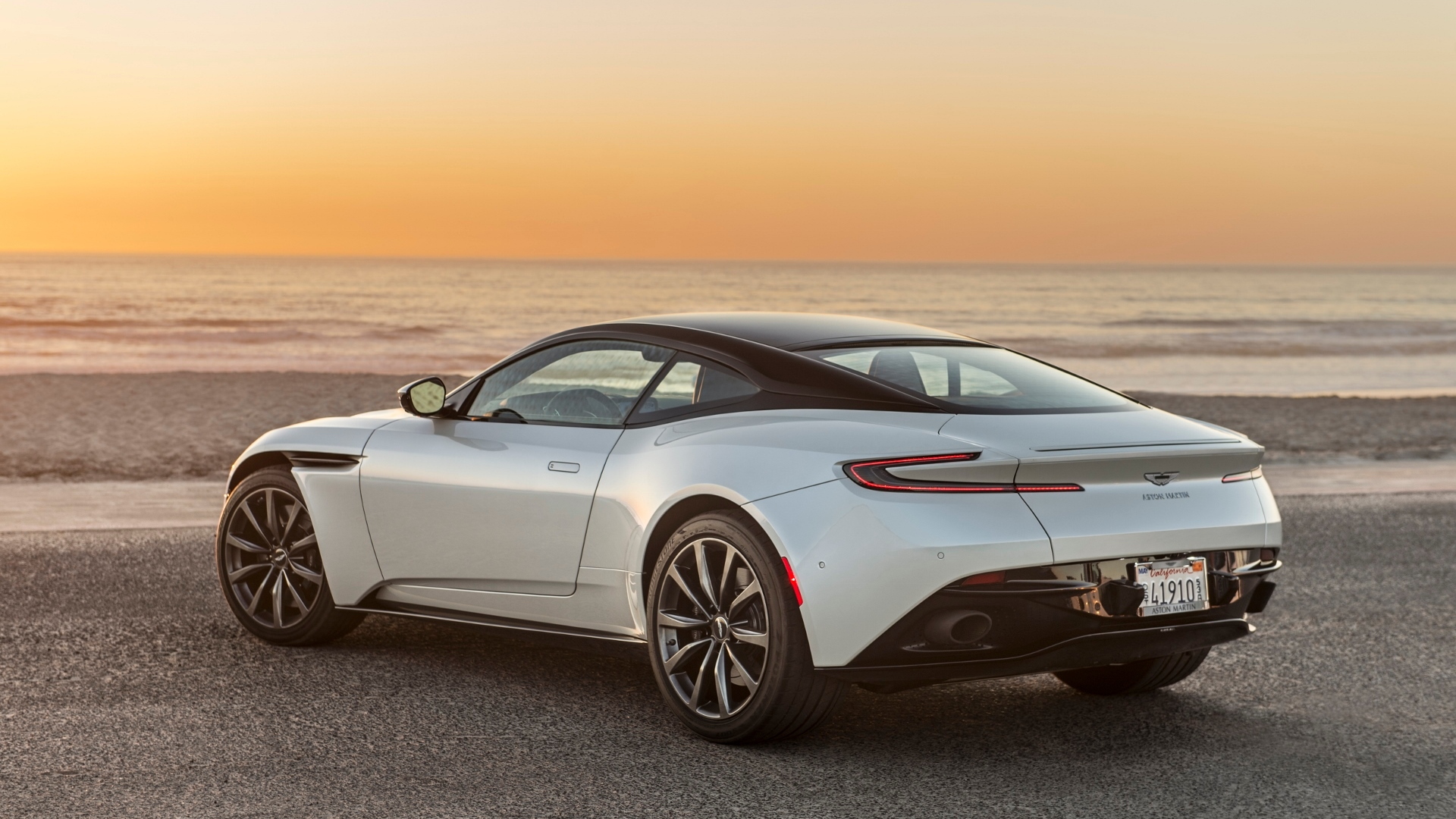 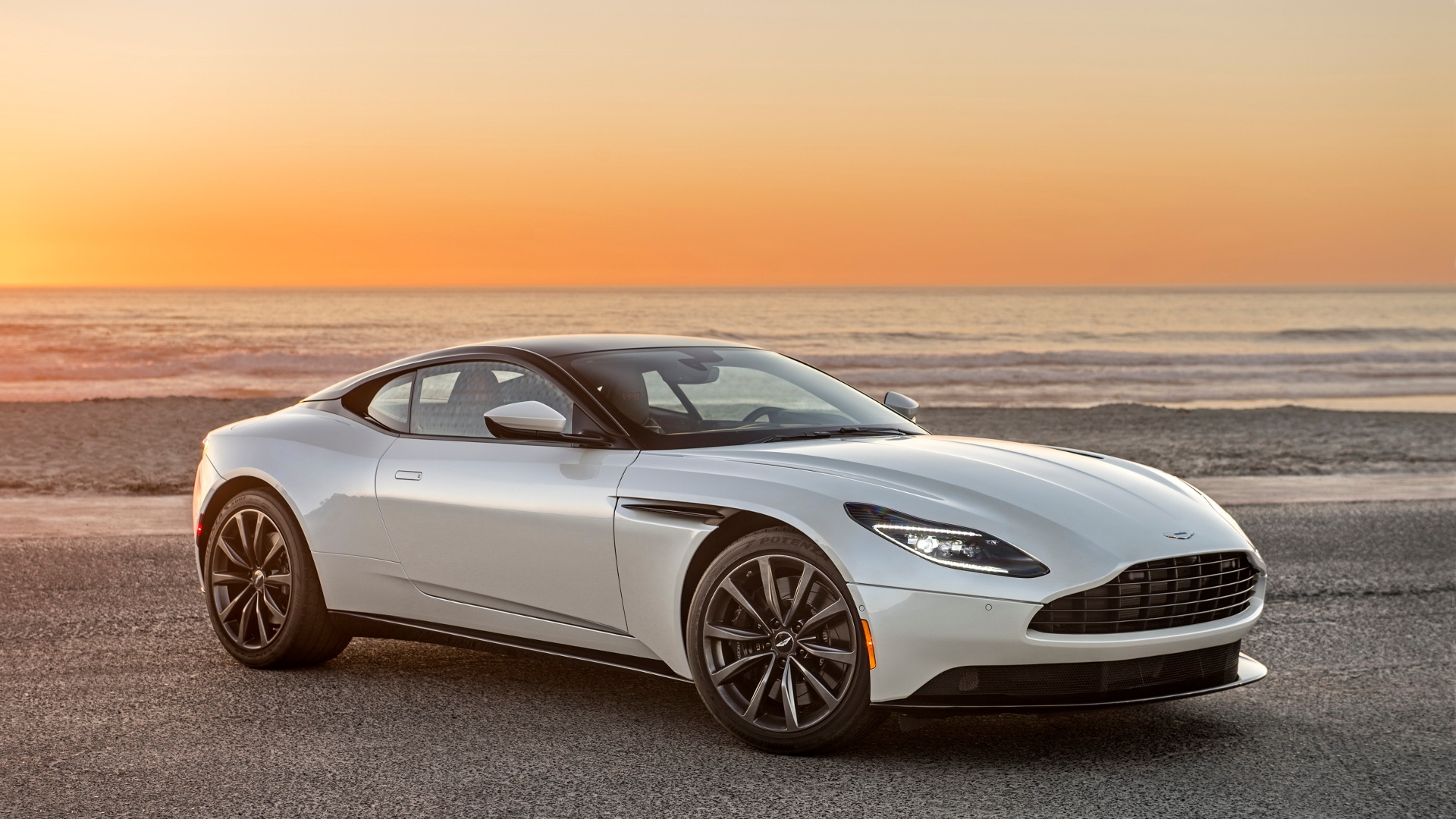 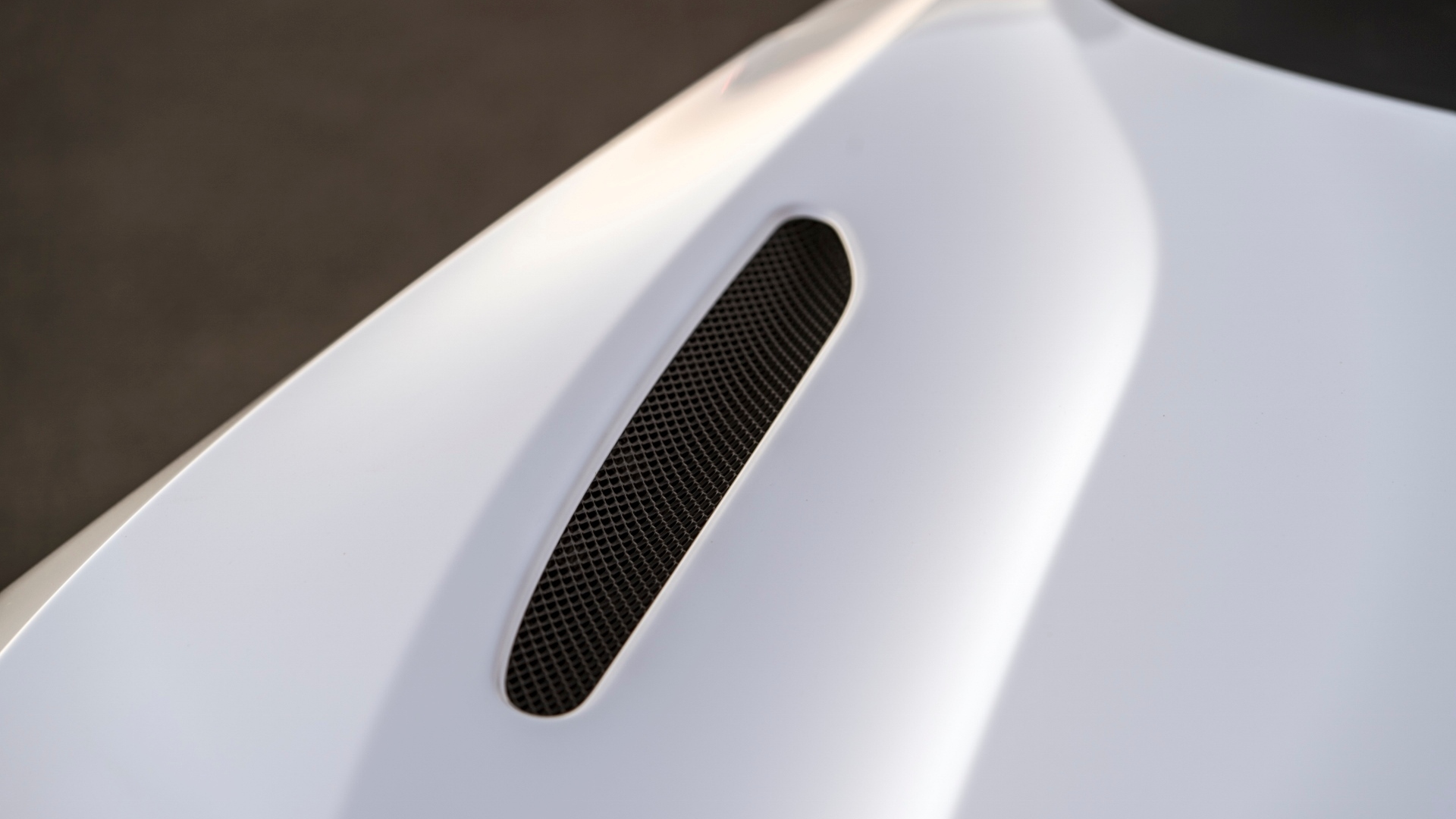 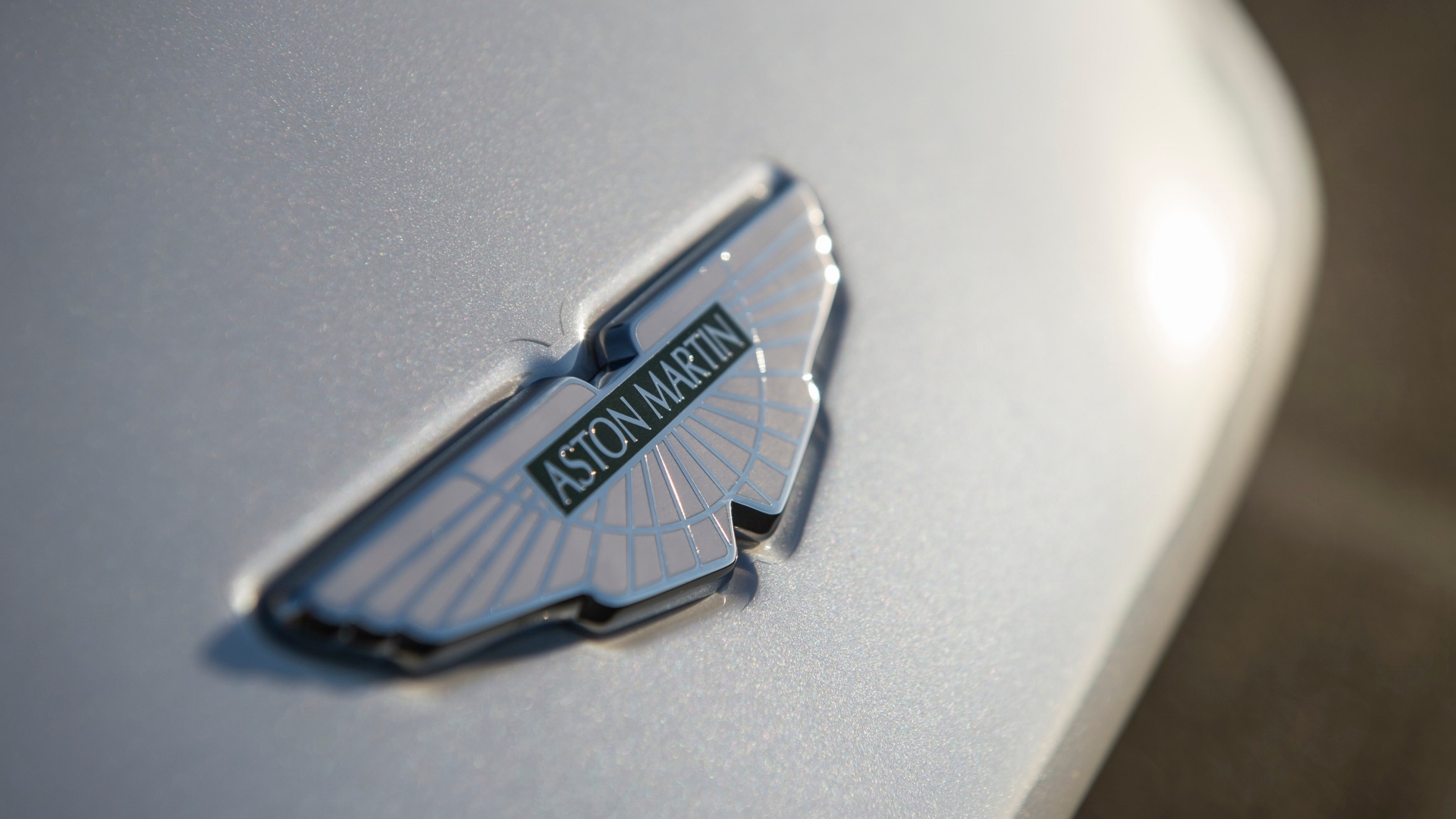 Aston Martins are known for two signature traits: drop-dead gorgeous looks and bad-ass soundtracks. But how do you maintain the band’s identity when you have to play a cover tune? If he were still alive, I’d tell you to ask Joe Cocker. Sometimes you get by with a little help from your friends and make someone else's song your own.

In the case of the 2018 Aston Martin DB11 V8, those friends are the good folks at Mercedes-AMG. Daimler AG, the parent company of Mercedes, owns 5 percent of Aston Martin, and the company’s performance arm provided its twin-turbocharged 4.0-liter V-8 for the DB11. Truth be told, the AMG engine makes the DB11 a better car than Aston's own V-12.

The 4.0-liter V-8 does duty in everything from the S-Class to the C63 and E63 to the GT sports car, but Aston Martin wasn’t content to let it sound like a Mercedes engine. To give it an Aston Martin voice, company engineers replaced the intake and exhaust. The goal was to limit the typical AMG bass tones and improve the more Aston Martin-like midrange and high tones.

Other engine changes included new ECU programming, tweaks to the throttle and engine mapping, and a switch from a dry sump to a wet sump since this would be a grand tourer instead of a track car.

As a result of the changes, the engine produces the same 503 horsepower as you’ll get in many AMG applications, but torque is a unique 498 pound-feet.

But then the V-8's advantages start to tip the scales in its favor. It almost certainly goes easier on gas than the V-12's 15 mpg city/21 highway/17 combined ratings, though EPA figures aren't in yet. The big change, however, is in weight, and that effects the whole character of the car. The V-8 weighs 243 pounds less than the V-12, and all that weight comes off the nose. That reverses the balance of mass from 51 percent front/49 percent rear to 49/51. It also let Aston engineers tune the car to make it the sportier choice for DB11 buyers.

Suspension changes include stiffer rear bushings to give the rear axle 5 percent more lateral stiffness, which helps the car rotate. The adjustable dampers are also stiffer to limit up-and-down motions. The anti-roll bars and springs have also been tweaked to deal with the change in weight and to make the car more agile. With less weight up front, the pistons of the Brembo 6-piston front brakes are smaller, though the rotors retain their 15.7-inch diameter up front and 14.2-inch diameter out back.

Aston Martin also changed its code and hardware to open up more of a delta between the dampers' Sport and Sport+ settings, as well as the sound and the transmission character between GT, Sport and Sport+. In other words, put the V-8 DB11 in its two Sport+ modes and it will ride stiffer than the V-12, hold gears longer, and switch from a bass to a baritone voice.

To show off the fruits of its labor, Aston Martin invited Motor Authority to drive the DB11 V8 from San Diego to Borrego Springs and back again, a route that, thankfully, involved more than a few canyon roads.

I was on a similar drive a year ago, and, holy cow, what a difference a year makes! The DB11 is an amazing leap forward from the DB9 it replaces and, yes, Aston Martin has made that Mercedes-AMG engine its own.

Fire it up, and the 4.0-liter V-8 growls with a menace befitting the sinister beauty of its tautly wrapped sheet metal. Choose the Sport or Sport+ modes and the note drops an octave and gets more gravelly, like Mr. Cocker does when he belts out “said I'm going to make it with my friends, yeah.” Stomp the throttle, shoot toward the horizon, then let off, and listen to the pops and crackles that remind you of the nonsense “yeahs,” “nos,” and “babies,” all the rock and blues greats use to accentuate the feeling in their songs.

The power is also ready, willing, and able. It’s not immediate from a start; mash the go-pedal from a stop and the turbos need some time to spool up before the 4.0 pins you back in your seat. Once underway, however, throttle response is immediate, shifts are quick and crisp (in fact, shift paddle travel is reduced by half versus the V-12, should you decide to shift on your own), and the California landscape rushes by in a blur. Opt for the powertrain’s Sport+ mode, and it holds the lowest gear possible as long as possible, which is great for carving canyon roads but annoying in San Diego traffic.

If you were worried that stiffer dampers and a sportier character would make the DB11 V-8 too stiff, relax. Aston Martin has developed the DB11 as a true grand tourer, balancing comfort and handling in a beautiful package that would make a comfortable car for an escape to the cabin many hours away.

Cruising along with the dampers in the GT mode is surprisingly comfortable. This car is a far cry from the DB9, which relied on a weaker body and a stiffer suspension. Choose the Sport or Sport+ settings and the ride becomes more jiggly but it still isn’t overly harsh.

CHECK OUT: 2018 Mercedes-Benz S-Class first drive review: driving the most- and least-expensive models

And yet steering and handling are more than satisfying. The DB11 is the first Aston Martin with electric assist power steering, and its quick 13:1 ratio teams with the stiff structure to make turn-in sharp and immediate. The 245/40 front and 285/35 rear Bridgestone Potenza 007 (see what Aston Martin did there?) tires bite hard in cornering and provide excellent grip. This 3,880-pound car tracks nicely through corners, too, rotating willingly.

Still, Aston Martin has left some performance equipment on the table given the fact that the DB11’s mission is to be a grand tourer instead of an outright sports car. It has a mechanical limited-slip differential to manage power through corners, and brake-based torque vectoring that will clamp the inside rear wheel and even the inside front in a turn to help the car rotate. However, it lacks other go-fast goodies that would really improve handling. A clutch-based torque vectoring differential would provide power to the outside rear wheel to help the DB11 attack corners, and rear-wheel steering would virtually shorten its wheelbase. Both would improve durability and shorten laps times, but neither are available.

The one to buy

Just as Joe Cocker made a Beatles song all his own, Aston Martin has made an AMG engine work well in the DB11. For the mere cost of 0.1 second in the 0-62 mph run and 13 mph at the top end, you get an engine that saves you money on the sticker price and at the pump, improves dynamics, and a sings a great song, even though it's a cover tune.

Sometimes all you need are your buddies.