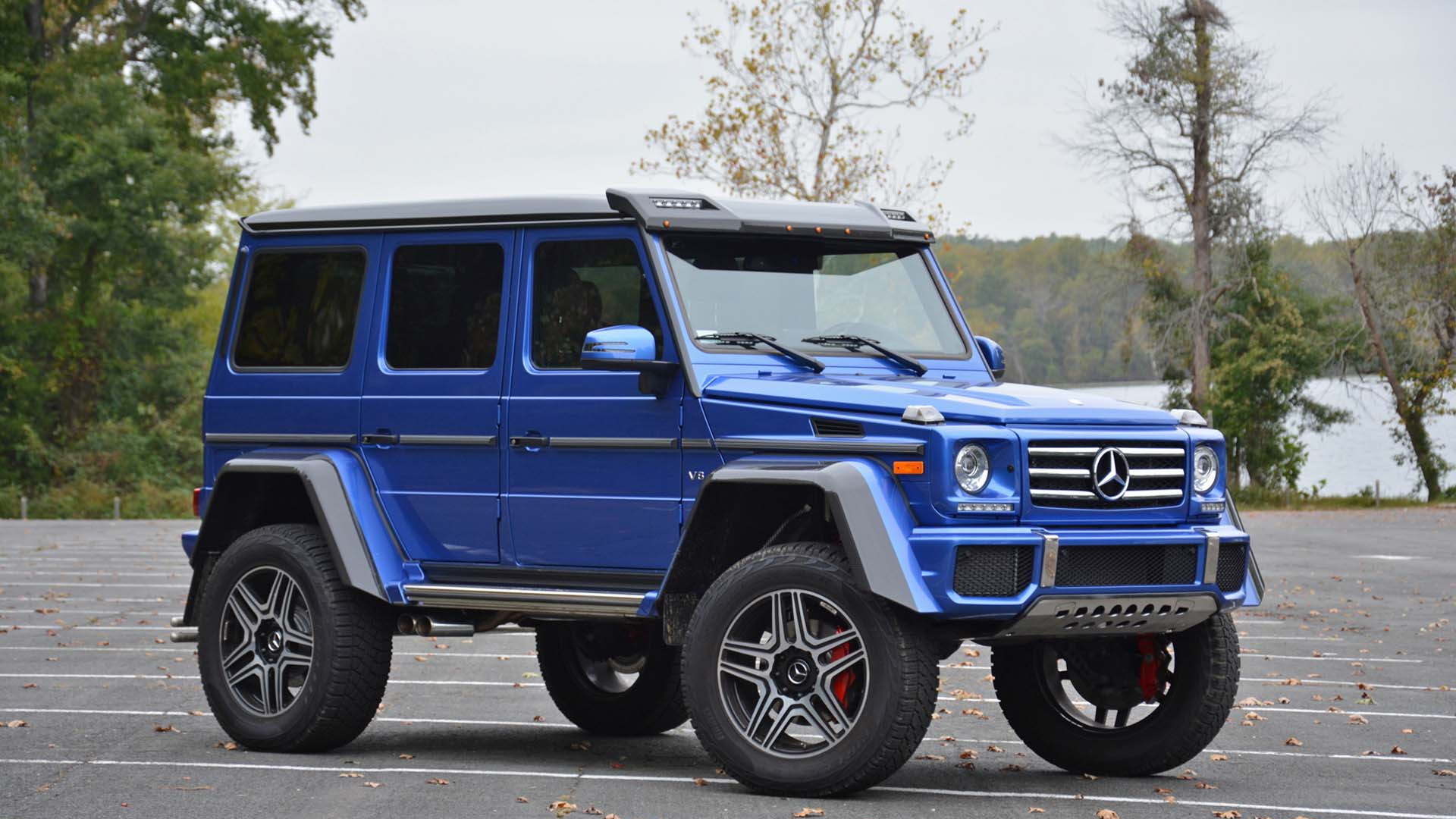 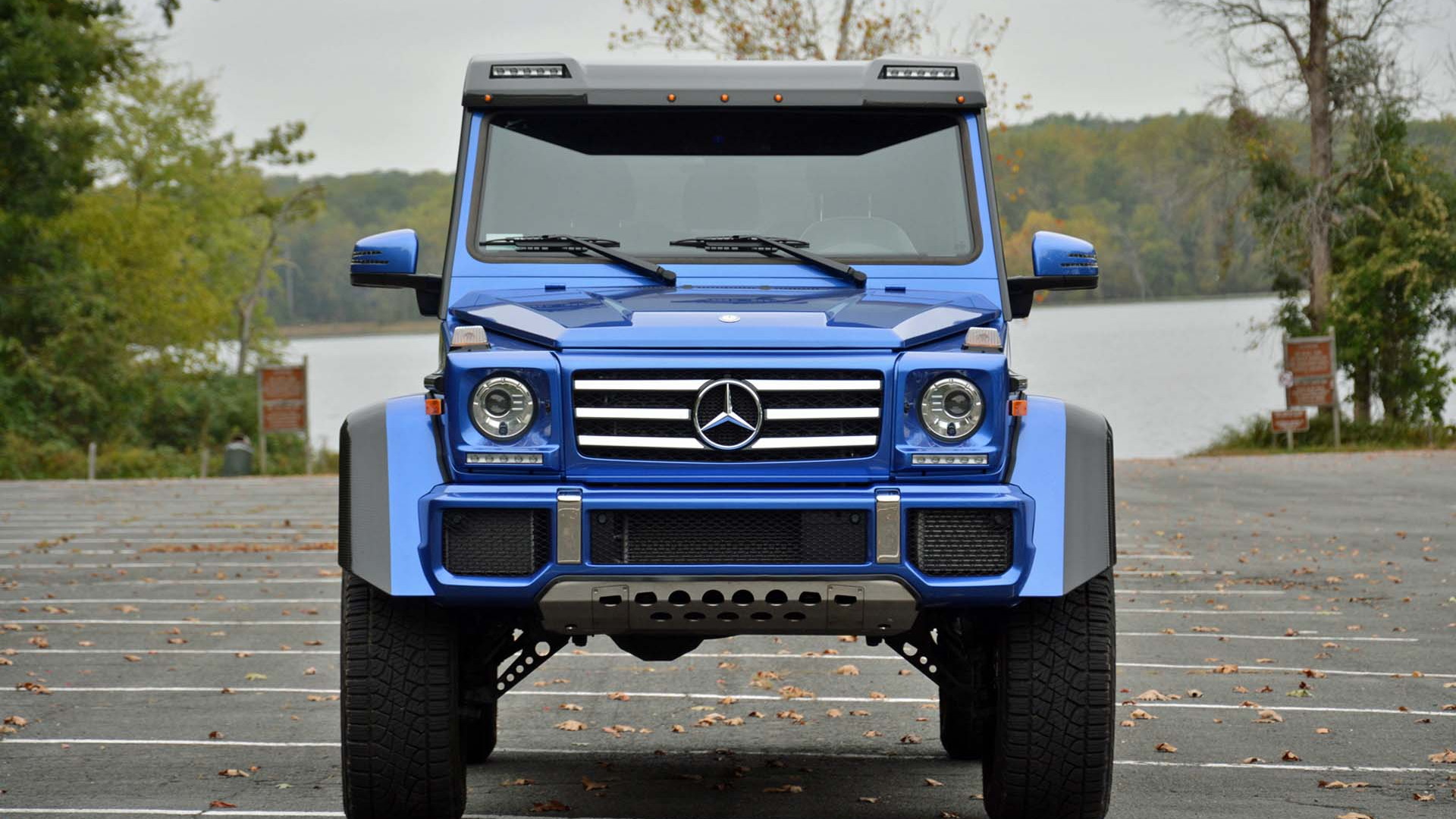 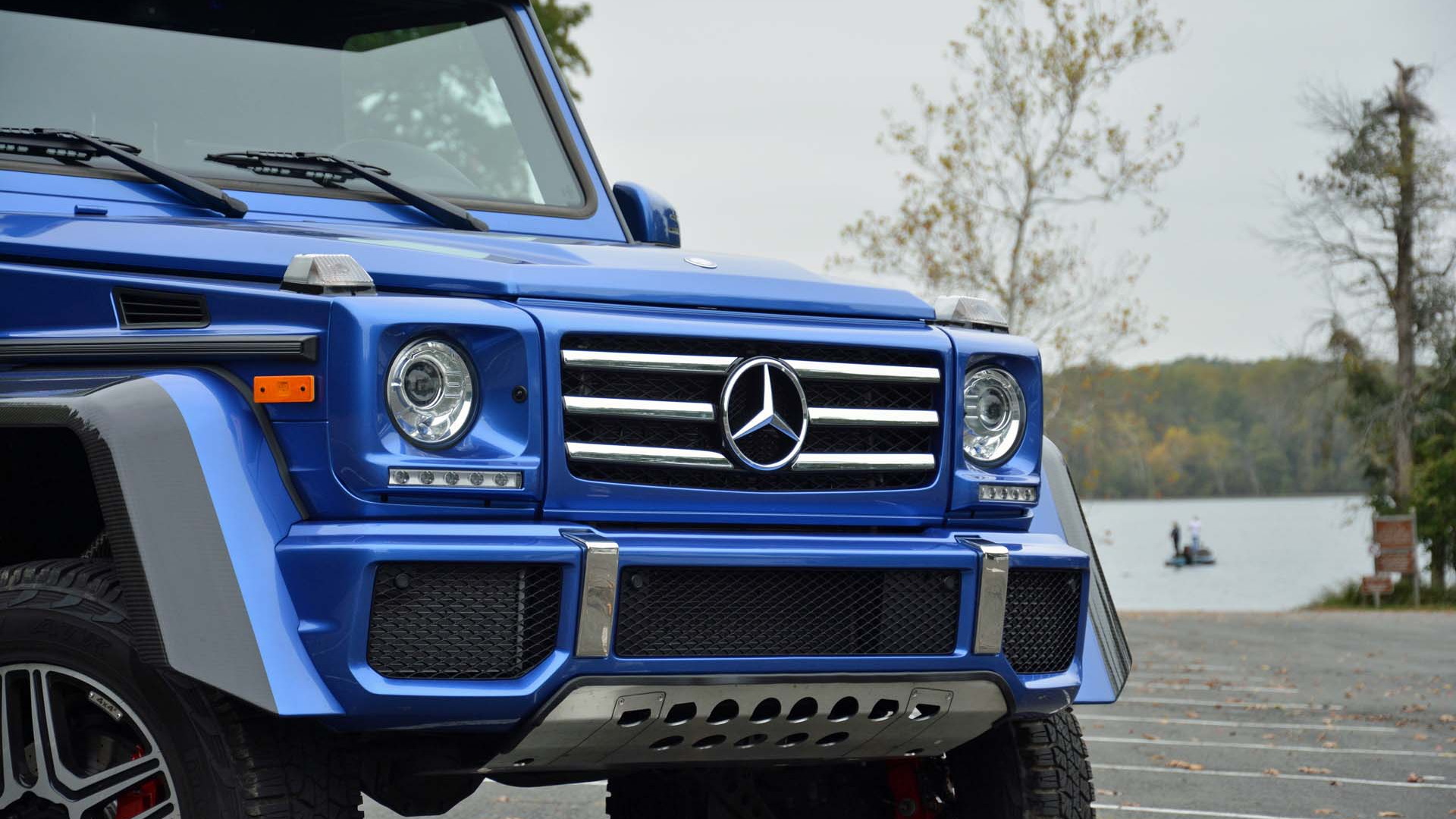 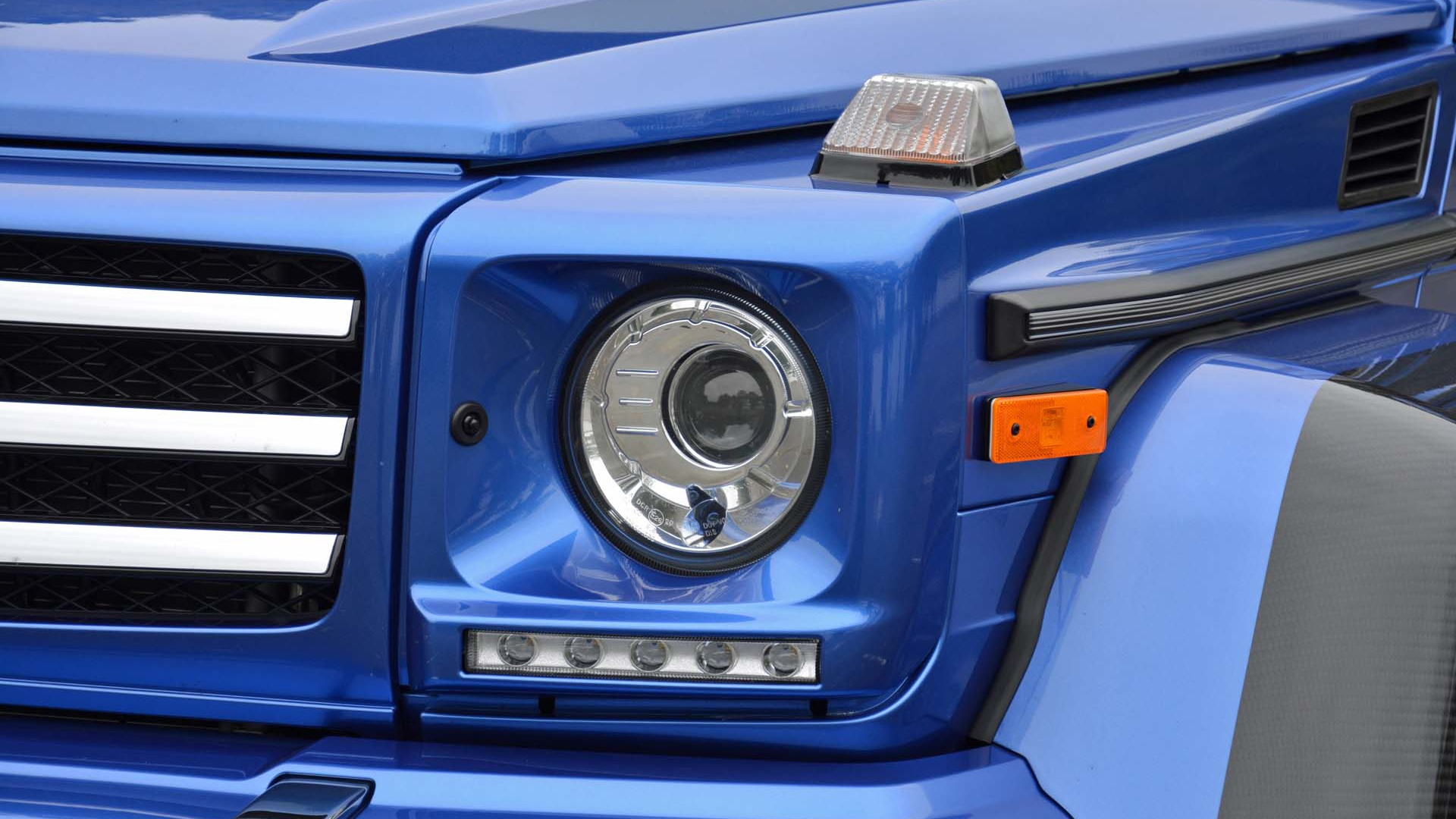 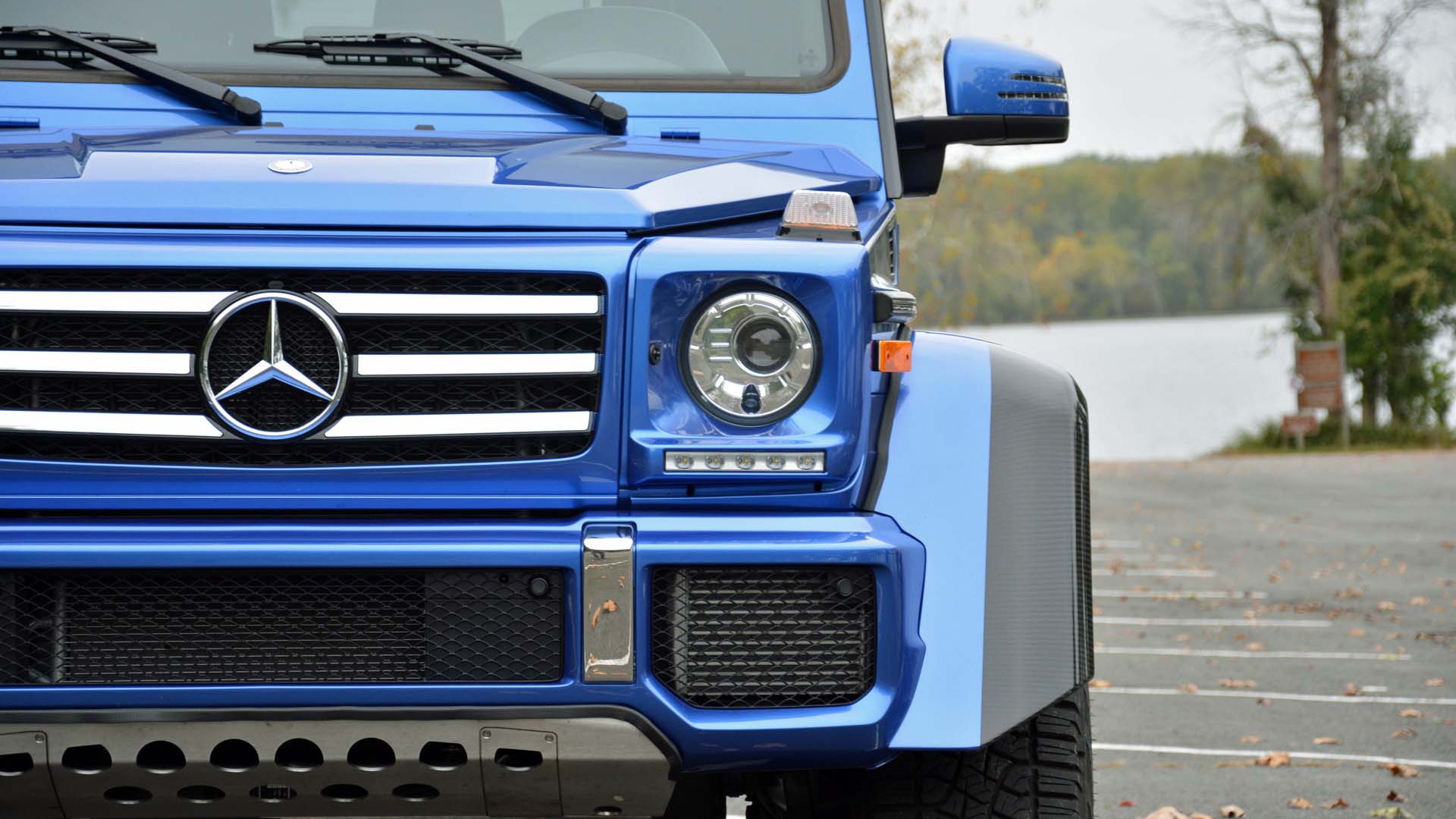 “Hey dude, your car is huuuuge!”

We expected that reaction while driving a vehicle with nearly 18 inches of ground clearance through Washington D.C. What we didn’t expect was someone to ask us if it’s a Hummer, though.

Come on! This is definitely not a Hummer. It’s the Mercedes-Benz G550 4x4 Squared. Remember the G63 6x6? This is its smaller, less powerful, but equally nuts sibling.

Or, to answer a question another curious bystander asked us: the G550 4x4 Squared is not merely a G-Class with an aftermarket lift kit.

Mercedes introduced the G-Class back when the cayenne was only a hot, red chili pepper—not a Porsche. Originally designed for the battlefield, the G hovered above the limits of borders and automotive social classes to become the darling of Beverly Hills. Soaring sales and transaction prices encouraged Mercedes to give the R&D department money to test the limits of the G’s appeal with low-volume models like the 4x4 Squared.

The increased ground clearance mostly comes from a set of portal axles, which are the double-decker bus of the axle world. They also make the G appreciably wider than stock, requiring the use of fenders wide enough for a picnic. They’re made out of carbon fiber to keep weight in check. Every little bit helps in a monster truck of an SUV that comes in at 6,500 pounds.

Follow the power flow upstream and you’ll encounter three differential locks, a transfer case, a 7-speed automatic transmission, and a 4.0-liter V-8 fitted with a pair of turbochargers. Closely related to AMG’s ubiquitous V-8, it provides 416 horsepower at 5,250 rpm and 450 pound-feet of torque at 2,250 rpm.

Pretty fly for a big guy

There’s no mistaking the V-8; its exhaust note is as recognizable as a chorus by The Offspring. The eight pistons roar to life before settling into a smooth idle with a low, menacing burble. From there, it’s surprise after surprise.

The first revelation is that the 4x4 Squared is maneuverable once you get used to its considerable width. At 177 inches long, it’s about seven inches shorter than a Jeep Wrangler Unlimited. It’s not nerve-racking to drive in everyday, assuming your commute doesn’t end in parking spaces painted with “Compact Only” under them. Mercedes geared the steering for comfort—not GT-like dynamism—so it’s relatively light and doesn’t require much effort.

The second revelation is its acceleration. Lay your foot in the throttle and the G moves with urgency that you wouldn’t expect from a behemoth like this. It’s all the more amazing because the transmission automatically starts in second gear unless the driver manually selects first by pushing the accelerator pedal all the way down to the floor. Speaking of the 7-speed, its shifts are precise and well-timed but not brisk; it exhibits a “leave me alone, I know what I’m doing” attitude when hunting for the next gear up or down.

The G’s composed handling is the third revelation. We wouldn’t take it on a skid pad, and the built-in sport mode doesn’t do much to change our mind about that, but Mercedes’ suspension wizardry does a remarkable job of keeping body roll in check under normal driving conditions. The trade-off is a firm ride that relays every imperfection into the cabin. The seats stop them before they reach the occupants’ spine.

Colossal Pirelli tires wrapped around 22-inch wheels and a model-specific all-steel suspension system with eight dampers and eight springs help the driver make the most of the G’s ground clearance. We can’t think of many obstacles commonly encountered on the trail (or in the parking lot of a suburban mall, for that matter) the 4x4 Squared can’t drive over with ease. Off the pavement, it only takes a minute to forget about the G’s reputation for decadence and appreciate it for what it is: an old-school, no-nonsense off-roader capable of climbing a glacier in fifth gear.

There was one aspect of this G550 we couldn’t shake: its $225,000 price tag. Meandering through the gorgeous Virginia woods on relatively narrow trails was a masochistic experience for the mind. Traffic—even in D.C.—is a controlled environment. There are lanes, lights, and sometimes even turn signals. You’re on our own out in the forest, at the mercy of any rock, tree, dirt bike, or bear that wants a chunk of your conspicuously elephantine luxo-cruiser. Believe us, we don’t want to find out the cost of a replacement fender.

Room with a view

The flat, vertical dash indicates the G is the real deal, not a quack retro-inspired replica of a once-relevant classic model. Mercedes swathed the cabin in leather and Alcantara, and furnished the dashboard with carbon fiber to add a sporty touch. From behind the wheel, it feels like you’re sitting in a Wrangler that went on a shopping spree after winning the lottery. The materials and the build quality are comparable to the ones in the S-Class, and we love the fantastic pneumatic bolsters integrated into the front seats. This is the kind of attention to detail that elevates the G above other, more modern luxury off-roaders.

It’s not as anachronistic as the now-defunct Land Rover Defender, which only got slightly less rudimentary over time, but there are places where its age becomes glaringly evident. Did SUV buyers in 1979 want a cup holder? Nope. Do they in 2017? You bet. Since there’s no room on the dashboard or on the center console, the front cup holder is a flip-up, basketball net-like gizmo bolted to the transmission tunnel side of the passenger footwell. Of course, it’s made with the finest netting and wrapped in hand-stitched leather. “The best or nothing,” as Mercedes often says.

In-car tech isn’t one of the G’s selling points, which is fortunate because it’s certainly not one of its strong points. The infotainment system consists of a screen on top of the dashboard, a controller knob behind the shift lever, and a series of redundant buttons on the center console. Mercedes could free up a considerable amount of real estate in the cabin by switching to a more user-friendly touch screen-based infotainment system.

The Mercedes-Benz G550 4x4 Squared exists in diametrically opposed dimensions. It’s the unprincipled chariot fast-living Russian mobsters drive through Moscow on their days off, the zenith of a model synonymous with self-indulgence. It’s also the culmination of an illustrious 38-year production run that’s going to end in the coming months, a concentrate of Mercedes’ knowledge in the off-roader department. When the current-generation G-Class finally enters the pantheon of automotive history, we’ll prefer to remember the G550 4x4 Squared for its original calling in life.