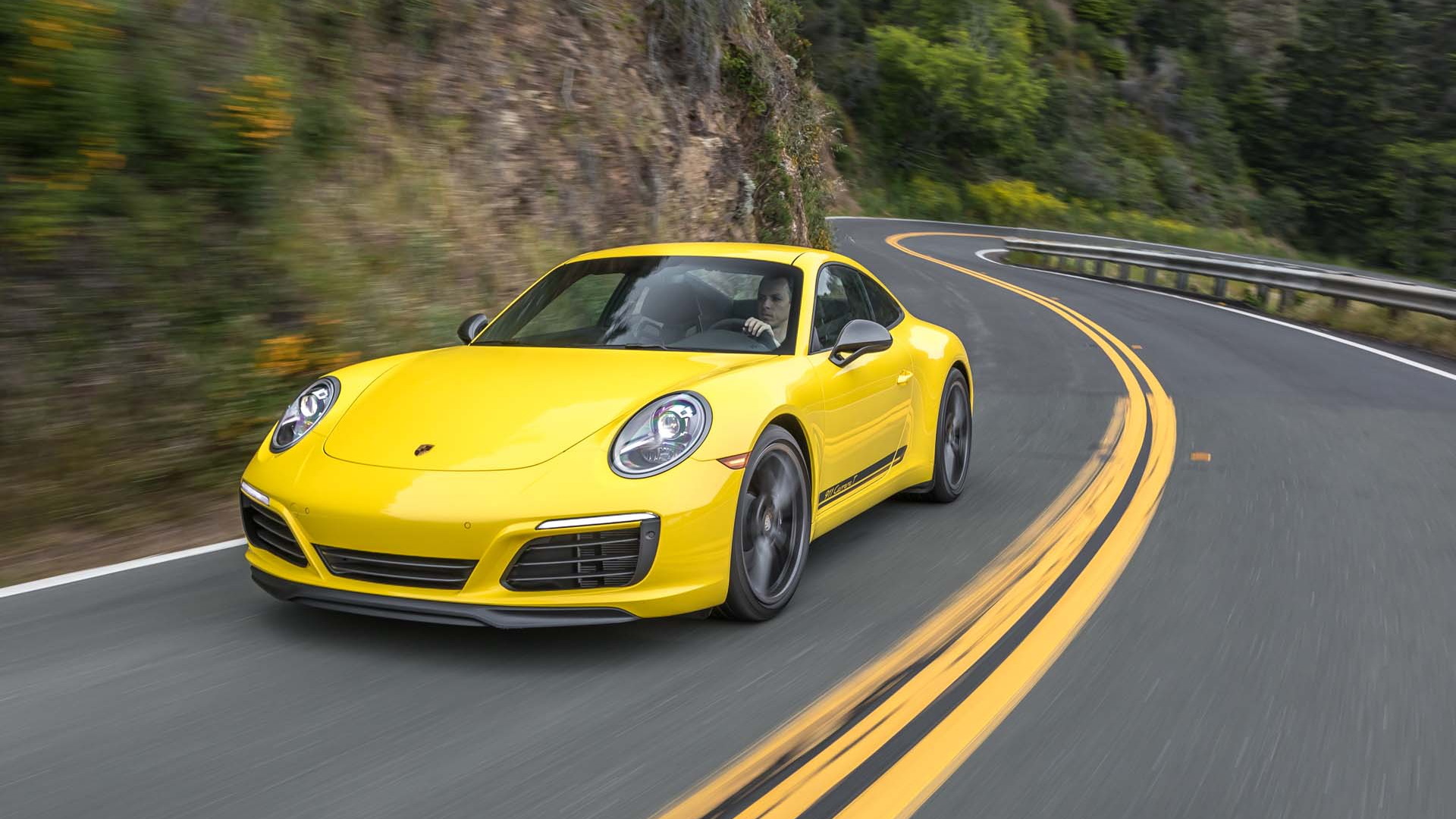 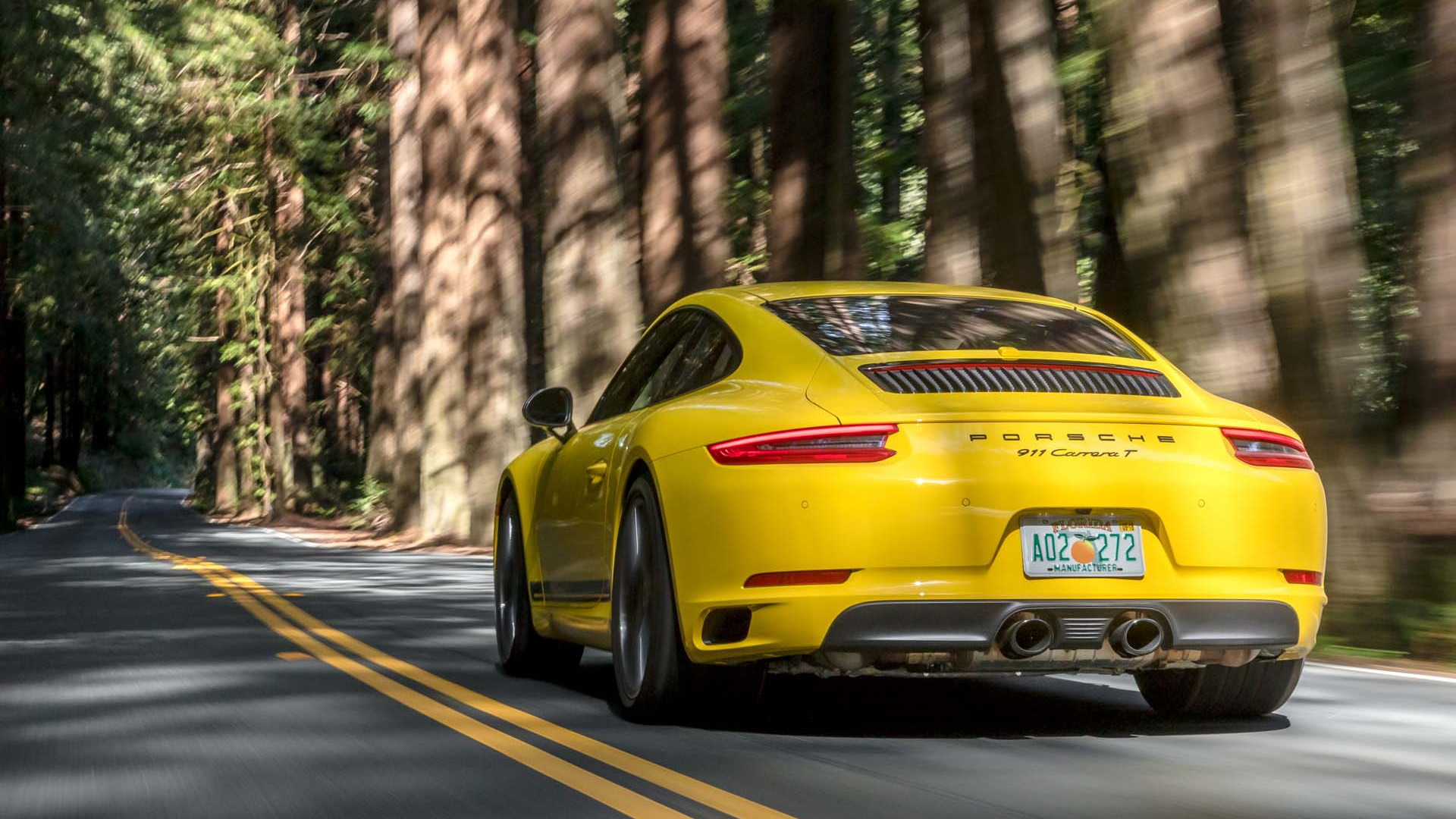 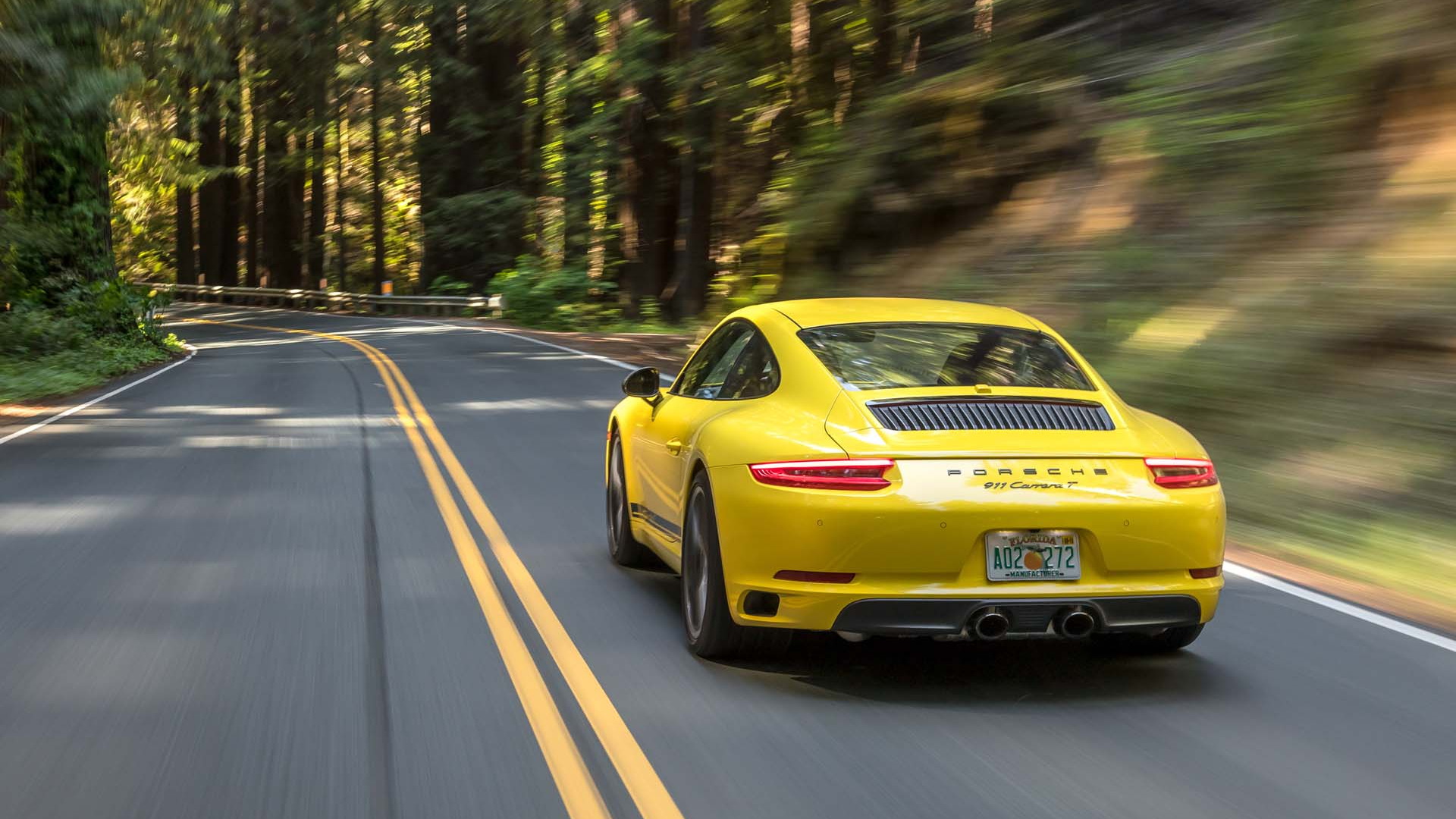 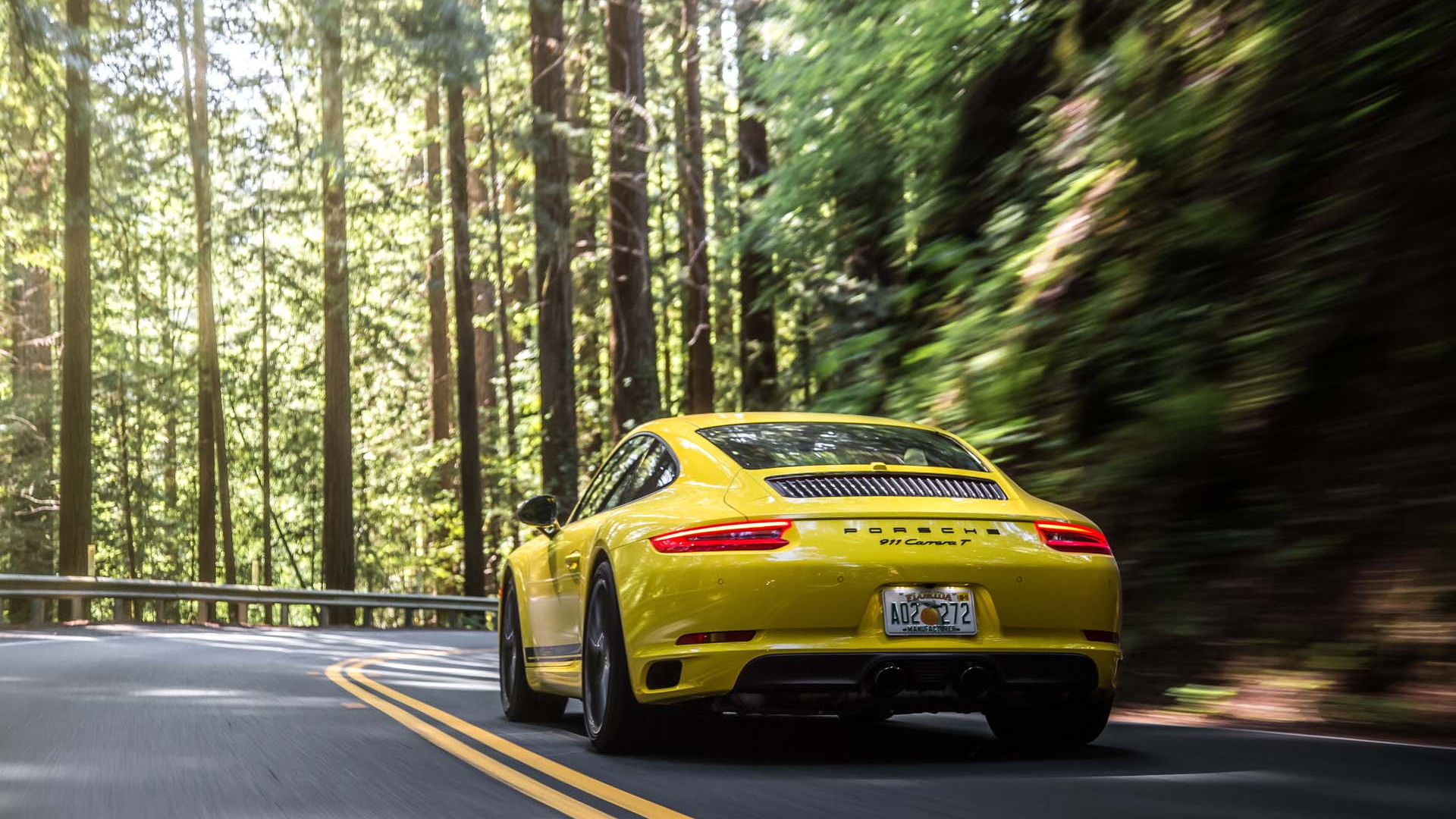 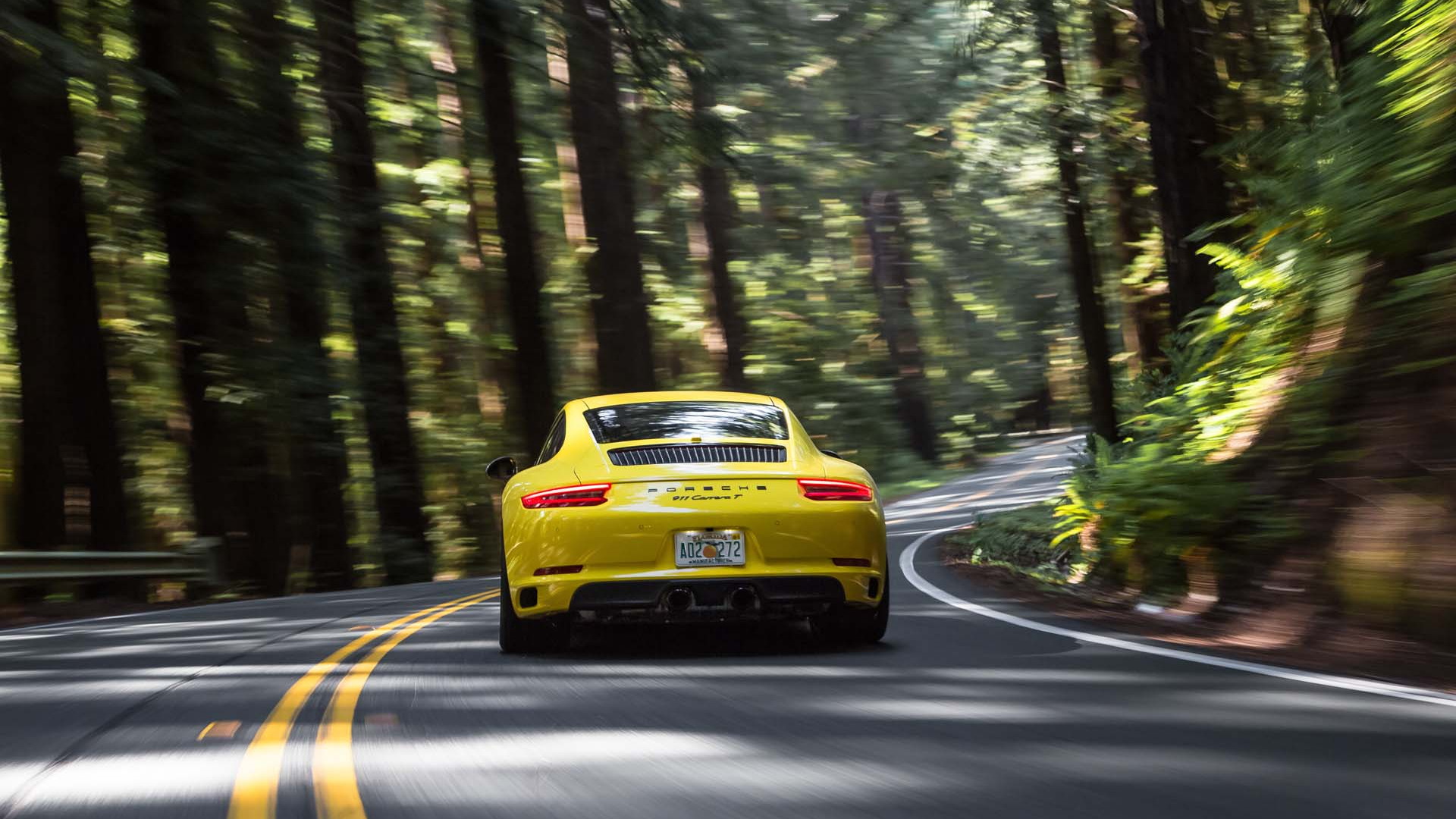 The scene in the rearview mirror of the 2018 Porsche 911 Carrera T is remarkably clear. It’s all high-definition vineyards and crystal-clear coastline, for as long as I dare look back.

Why it’s so clear: Engineers fitted thinner rear and side windows that are not only 6 pounds lighter, but also skip a defroster and the unforgivable clutter of those thin hot wires.

The road winds through Napa Valley, and it’s one of its good days (Editor's note: Are there bad days in Napa?), when the trees and rows of chardonnay grapes individually glint, fresh from a morning mist. The ribbon of road disappears into itself in a never-ending series of turns that vault California Highway 128 into its own destination. It’s not just another road.

The Carrera T is about the road ahead, and not what’s behind.

If the Porsche 911 is the everyday supercar, the 911 T is the occasional supercar—as in, each time behind the wheel is an occasion.

The configurator build is saved, labeled conveniently “In case of lottery win, buy everything in this file.” Code PK2LJRI9.

At $112,990, it’s hardly a deal. I’ve stacked my “purist” Porsche spec deck with all aces: slick top, badge delete, gray Carrera Sport wheels, and also sport buckets borrowed from the GT2 RS that are reassuring and restricting like a weighted blanket during a thunderstorm.

The vestigial rear seats from the Carrera are gone in my dreams, replaced with a vestigial shelf in the Carrera T that’ll get used less than the radio.

About that radio: It had to stay, but not by Porsche’s diktat. In some parts the world, the 911 Carrera T can shed radio sound, but in the States it’s a must from the factory: rearview cameras are standard.

MUST READ: 2019 Porsche 911 teased with nod to future hybrid

Admittedly, the PDK skips the 911 T’s notable differences from some 911s. The Carrera T #GiveAShift edition gets a shorter constant transaxle ratio (not final drive), a mechanically locking rear differential, and Porsche Torque Vectoring taken from the Carrera S, while the PDK makes do with the same automatic from the Carrera.

I don’t mind at all.

The PDK dashes through all seven of its ratios like a greatest hits album and goes back again at your whim. Can we hear third gear again?

The 7-speed manual isn’t much different than the PDK—even with identical ratios—but a has a slightly shorter final drive. We didn’t sample a manual-equipped Carrera T, but we imagine it’s just like the PDK but burns more calories.

Dialing the Porsche PDK sport selector knob to Sport+ and pushing the center button for maximum attack has all the subtlety of pole dancing in church with just as much entertainment.

The sounds that fill the two-seat cabin are raw, visceral, and immediate thanks to less sound-deadening material in the Carrera T.

All told, the Carrera T weighs 11 pounds less than the standard Carrera. That’s a measly 0.3 percent lighter, mathed from the Carrera’s T 3,142-pound mass, but with 6 pounds less glass and presumably 5 pounds cut from sound-deadening, it’s a scalpel taken to the 911’s clothing in all the right places. Imagination can finish my analogy for me, I presume.

From there, the Carrera T fills in the blanks: standard sport exhaust that dials in bass from the 3.0-liter turbo-6 planted behind the rear axle. The stability and traction controls let their hair down lower in the Carrera T compared to the Carrera.

But the Carrera T makes 370 horsepower like the standard car. Its power isn’t wholly different than that base car either, which is good. It’s still a free-revving thing despite its turbos, and the engine reaches toward a 7,500-rpm redline that literally and figuratively screams.

The suspension is lower by a fraction of an inch from the factory, and the same setup is available on nearly a dozen other 911s. Optional rear-axle steering on the Carrera T makes a cameo too, but only if tighter turning circles don’t equal heresy for you.

The road ahead > the road behind

Through the road and behind the wheel, the Carrera T’s drama is every bit intact despite its parts-bin genesis. The existence in other cars of most of the bits that comprise the Carrera T doesn’t spoil it at all, it’s a whole-sum car.

It transcends its rear-weight bias of more than 60 percent to delight its front passengers beyond numbers.

The Carrera T responds in a progressive, naturally aspirated way, but with turbocharged immediacy. It rolls out of corners in ways that purists would recognize as vintage Porsche, sped up with new technology. The throttle presses forward directly proportional to my courage, and exponentially proportional to my smile. Small stabs make big grins.

It’s an occasion for remembering where the 911 can go as it enters a new generation. Where it has been matters, too, but not as much, we think.
The road ahead looks clear from here.

Porsche provided travel and lodging to Internet Brands Automotive travel to bring you this firsthand report.