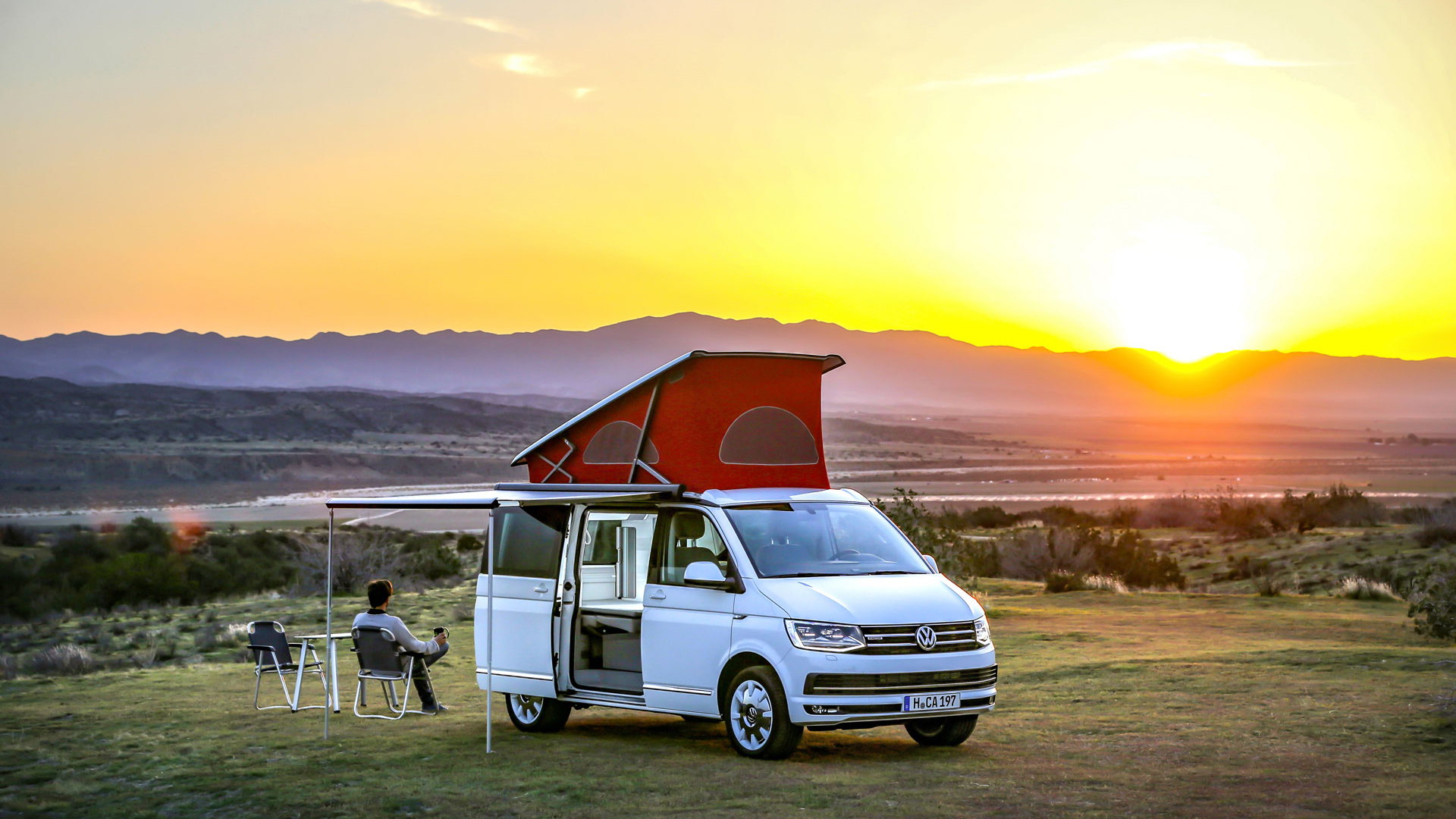 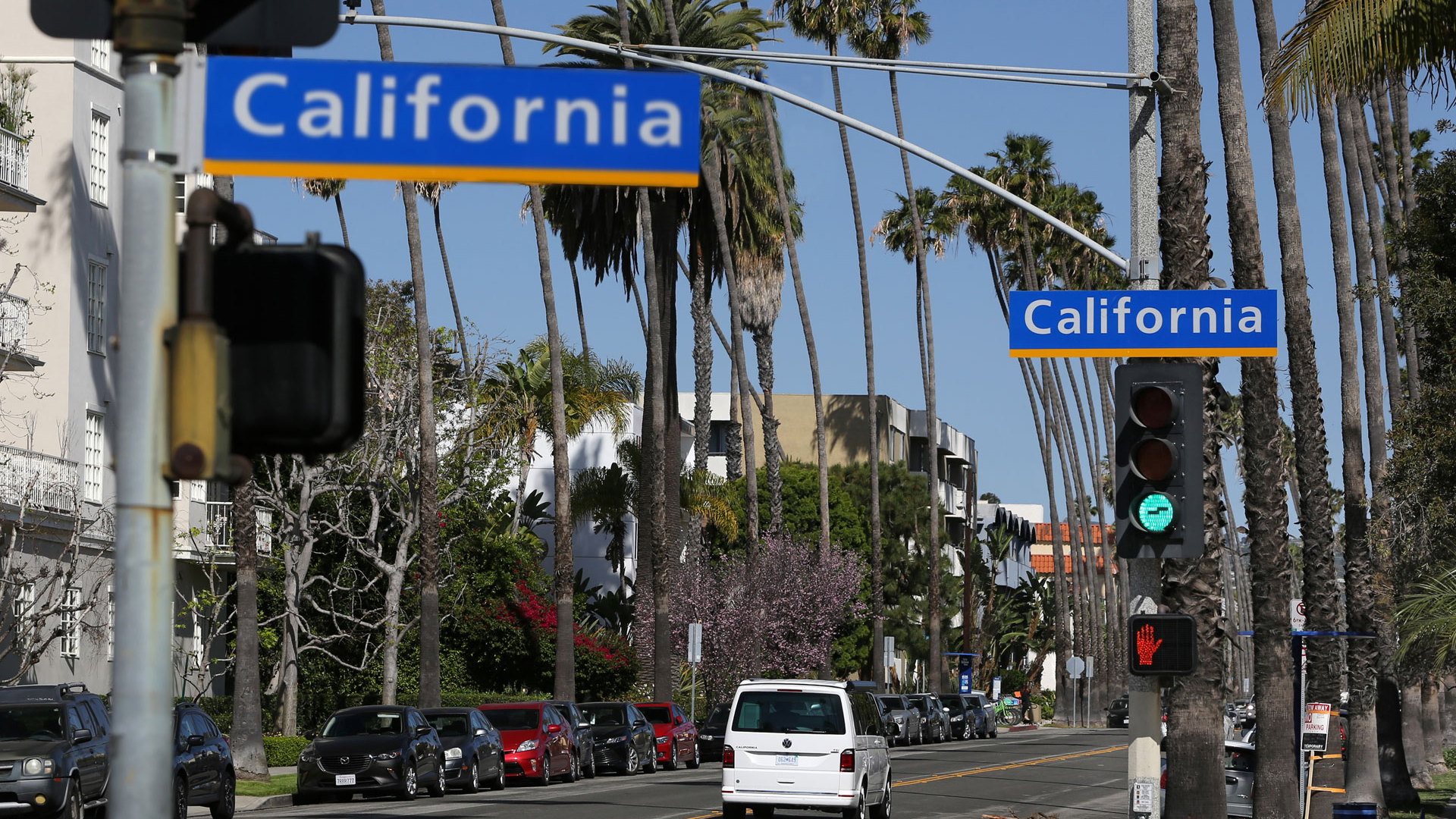 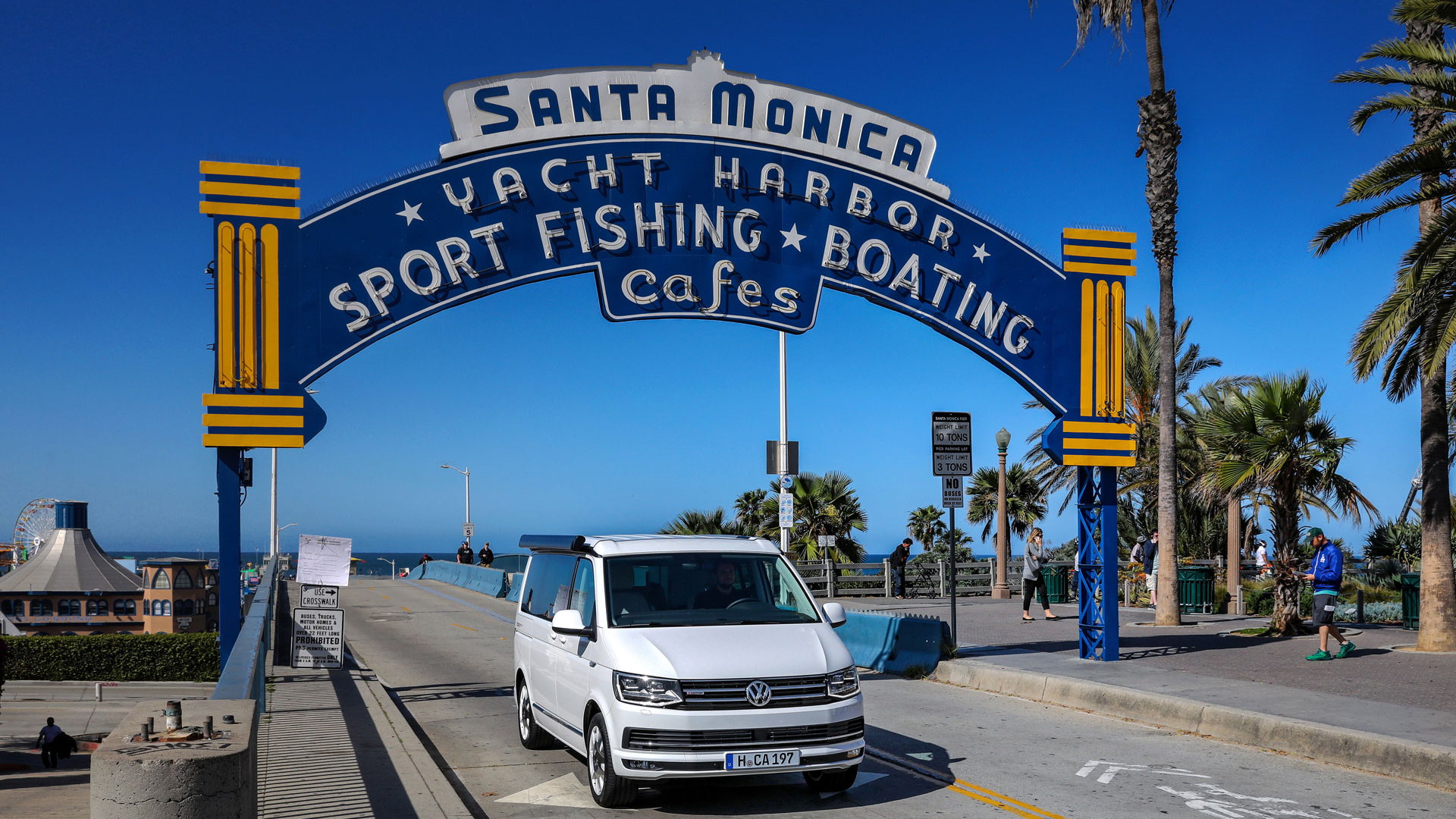 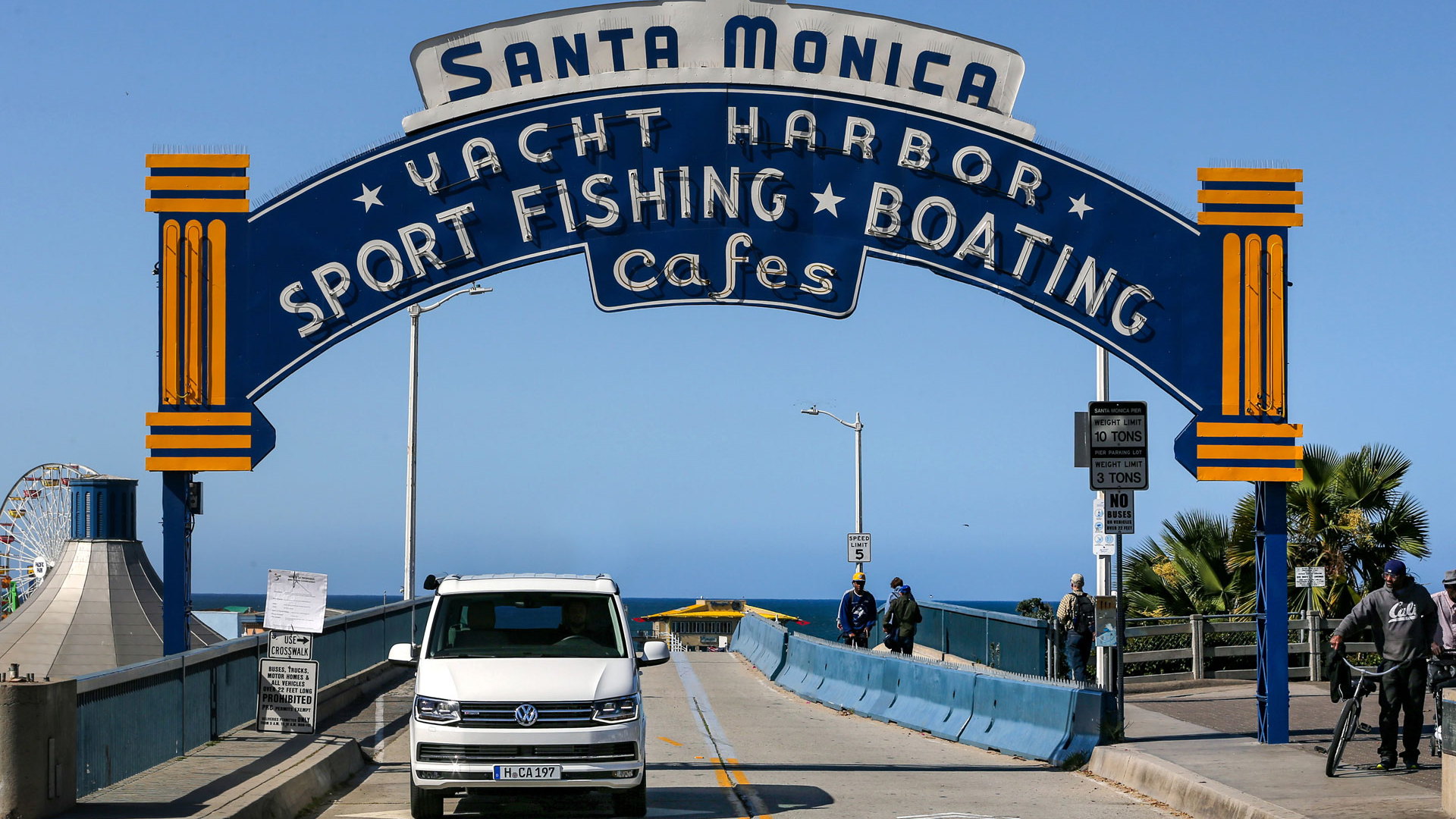 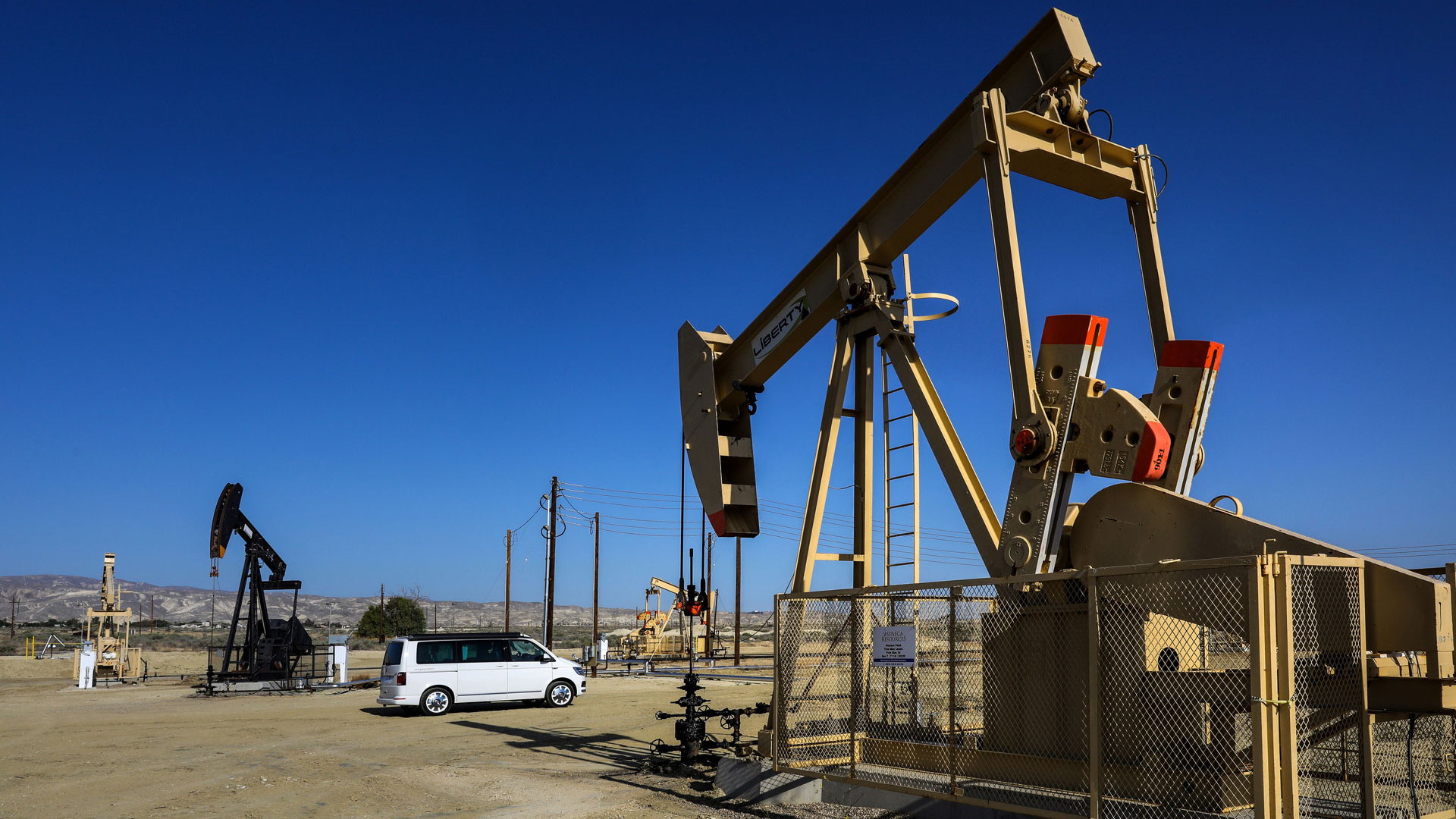 Aside from the tragic Volkswagen Routan, the U.S. hasn't seen a new VW van since the Eurovan disappeared 15 years ago. And until the all-electric I.D. Buzz arrives, that's not likely to change.

It should. After three days and two nights living in one of VW's iconic camper vans (along with a short drive in a passenger-only Multivan), this is the forbidden fruit Americans should clamor for.

We spent the bulk of our time with the Volkswagen California camper van, the king of VW's van range and a vehicle that looks like nothing else. It's tall and boxy, and looks right at home in the catalog of Volkswagen Commercial's European catalog.

Our tester, a range-topping California Ocean Red, wore retro wheels with heritage-inspired chrome lug covers and large Volkswagen logos—just like the camper vans that tooled along the Pacific Coast Highway in the 1960s. Instead of a prominent Volkswagen badge on the nose, the company's no-nonsense grille was flanked by LED headlights with premium-looking running lights. An extendable awning sat above the passenger's side rear door.

Inside, it doesn't take long to realize we could spend a week living with the California and not uncover all its secrets. Its ingenuity is endearing. Behind the driver's seat sit two cabinets with sliding doors, a sink, and a cooker. The California can carry nearly 8 gallons of clean water and 8 gallons of waste water, while the cooker runs off propane stored in a 6.2-pound tank. Aft of the cooker is a deep refrigerator with 1.5 cubic feet of space and seven separate temperature settings––it kept beer, Red Bulls, and other snacks cool throughout our three days of driving/camping.

Between the fridge and the second-row sliding bench is a table that slides forward and pops out, so the backseat can serve as a desk or dining table, holding up a MacBook Pro and a bag of In-N-Out with equal ease. Both front seats rotate 180 degrees, although the table is too small to accommodate people in the front and back row at the same time.

As a desk, the table worked well. Even expanded, it's on runners for easy adjustment. A 12-volt outlet––one of many––is hidden just under the passenger's side of the rear bench and it’s where we plugged a power inverter for a laptop. The power inverter is a uniquely American need––all Californias carry an onboard inverter, but it outputs at a very European 230 volts.

The tall tailgate hides a zip-up compartment for a pair of camping chairs, while the single sliding door houses a pop-out table that doubles as a stylish insert. Lights and 12-volt outlets are everywhere. There's even a ribbon of LEDs integrated with the kitchenette, to create some luxurious ambient light.

But it's the two twin beds that are the heart of the California. While neither is especially comfortable, they beat sleeping on the ground or even with a decent sleeping pad. And importantly, deploying either bed is a painless procedure.

For the bottom bunk, where we spent the first night, lift the floor mat up to expose the attractive wood-like floors, slide the second row forward, pull a nylon strap to lower the backrest, and flip the trunk-stowed mattress forward. It takes about 30 seconds.

The second bed pops out of the California's roof and is even easier to deploy––simply open the sliding door, move to the driver's seat, and then using the overhead LCD control screen, select the roof and hold down a button to deploy it.

In the time it takes to raise or lower an older convertible roof, the California's pop-up element comes up with access to the upper bunk. It's a sturdy setup, with an IKEA-style slotted baseboard below the thin mattress. Push the bunk panel up, and like a normal car's trunk, the entire bed lifts up, enough for a taller adult to stand up in the passenger compartment. Getting in and out of the bed is easy, too––simply step on the driver's seat, then on the armrest, and make a short hop up. It's easier to get into this bed than most bunk beds.

The top bunk is the better sleeping location. Three zip-up windows give it a tent like atmosphere, but like a tent, it's not all that dark once the sun comes up. On the lower bunk, shades deploy to cover every window.

The California's built-in heater keeps sleeping comfortable. It kept us warm even on the pair of unseasonably chilly nights we experienced while testing in the hills south of Santa Barbara (night one) and the desert farmland north of Ojai (night two).

Both the heater and the refrigerator (and the many LED interior lights) draw their power from a pair of auxiliary batteries that pack just under 2 kilowatt-hours of juice in total.

Whether California or Multivan, Volkswagen's steering has perfect weight and an appropriate on-center deadzone for a vehicle of this size. It drives small and is easy to place on the road, and even its top-heavy nature isn't a headache.

On a sublime stretch of road north of Ojai, California and through fire-ravaged former forests, the VW California delights. This van is fun, almost tossable, and remarkably predictable in the way it handles. Yes, it rolls heavily when pushed through a corner, but the California always feels stable and easy to manage––it's confident in a way a vehicle with these dimensions shouldn't be.

Running at speed down the I-5 toward Los Angeles and along the gently winding, freeway-like sections of the Pacific Coast Highway between Malibu and Oxnard, the California is unflappable. The ride isn't super comfortable or plush––it responds readily to imperfections, but in a very European way. It feels planted and controlled, and none of those pavement pimples make their way into the steering. Bump steer simply isn't an issue in the California. This is an impressive highway cruiser.

That's true despite what's under the California's hood. Volkswagen will offer 2.0-liter gas and diesel-powered 4-cylinder engines, 6-speed manual or 7-speed dual-clutch transmissions, and available 4Motion all-wheel drive. We're testing the less powerful of the two 2.0-liter, turbocharged 4-cylinders, that offers 148 horsepower and 206 pound-feet of torque, although American consumers likely would be more interested in the 201-hp version of this engine and its 258 lb-ft of torque.

It's not that the base engine is bad––torque is plentiful from early in the rev range, peaking between 1,500 and 3,750 rpm. This is very accessible power that arrives without fanfare. No, weight is the issue, thanks to the extra batteries, water tanks, cooker, sink, fridge, pop-up tent, camping chairs, and table, not to mention our tester's optional all-wheel-drive system.

While we don't have an exact figure for the California Ocean Red with our configuration, based on the other vans we do have information on, we'd wager our tester tips the scales at 5,800 pounds. In other words, every horsepower is responsible for nearly 40 pounds of van.

The result is a roughly 11-second run to 60 miles per hour, and while that's very slow, when was the last time your living room hit 60?

The 7-speed dual-clutch does the best that it can to keep the engine in the heart of its torque peak (from 1,500 to 3,750 rpm). It upshifts early unless you're aggressive with the gas pedal. But this is almost counterintuitive––the engine is at its best when the revs are low, growing thrashy and wheezy the harder we drove.

Guys, Volkswagen is not going to sell the California or the Multivan in their current forms in the US. Over three days with the Volkswagen team, we spent a lot of time pestering the PR team about the possibility of U.S. sales––it's not happening. VW brought these particular Californias to California to celebrate the model's 40th anniversary and hosted several waves of global media––U.S.-based publications were simply invited as a formality (or a particularly cruel tease, if you're a cynic).

And even if the California did go on sale in the U.S., it would not be cheap. The Ocean Red we were driving starts at over 66,015 euros (over $78,000 at today's rates). Even a base California requires at least 43,220 euros ($51,200). That kind of money can buy a very nice pickup truck and a tow-behind camper that will probably have a real shower and bathroom (the California's biggest shortcomings).

The passenger-only Multivan is a more tempting proposition, starting at just under 30,000 euros (about $35,000). That's still not cheap, but for a vehicle that's so much more versatile, arguably more attractive, and that drives better than a Ford Transit Connect, it makes the Multivan worth considering as a minivan alternative.

Instead, it's best to think of this small taste of Volkswagen's van goodness as a sign of what could come with the production I.D. Buzz. If VW's all-electric wunderkind has even half the versatility of the company's current vans, it will be one of the most interesting electric vehicles around. We just hope there will be an outdoorsy electric camper.