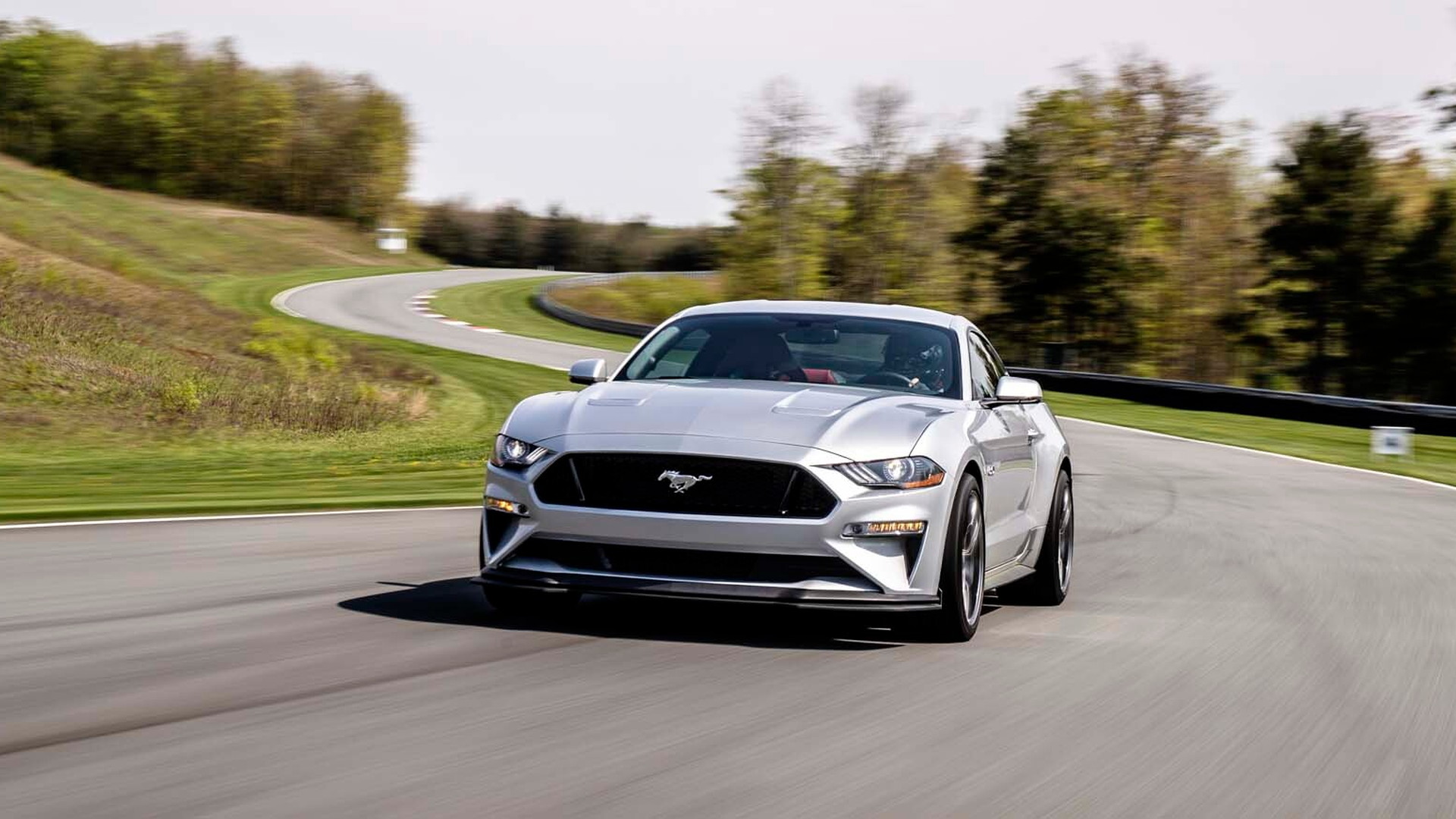 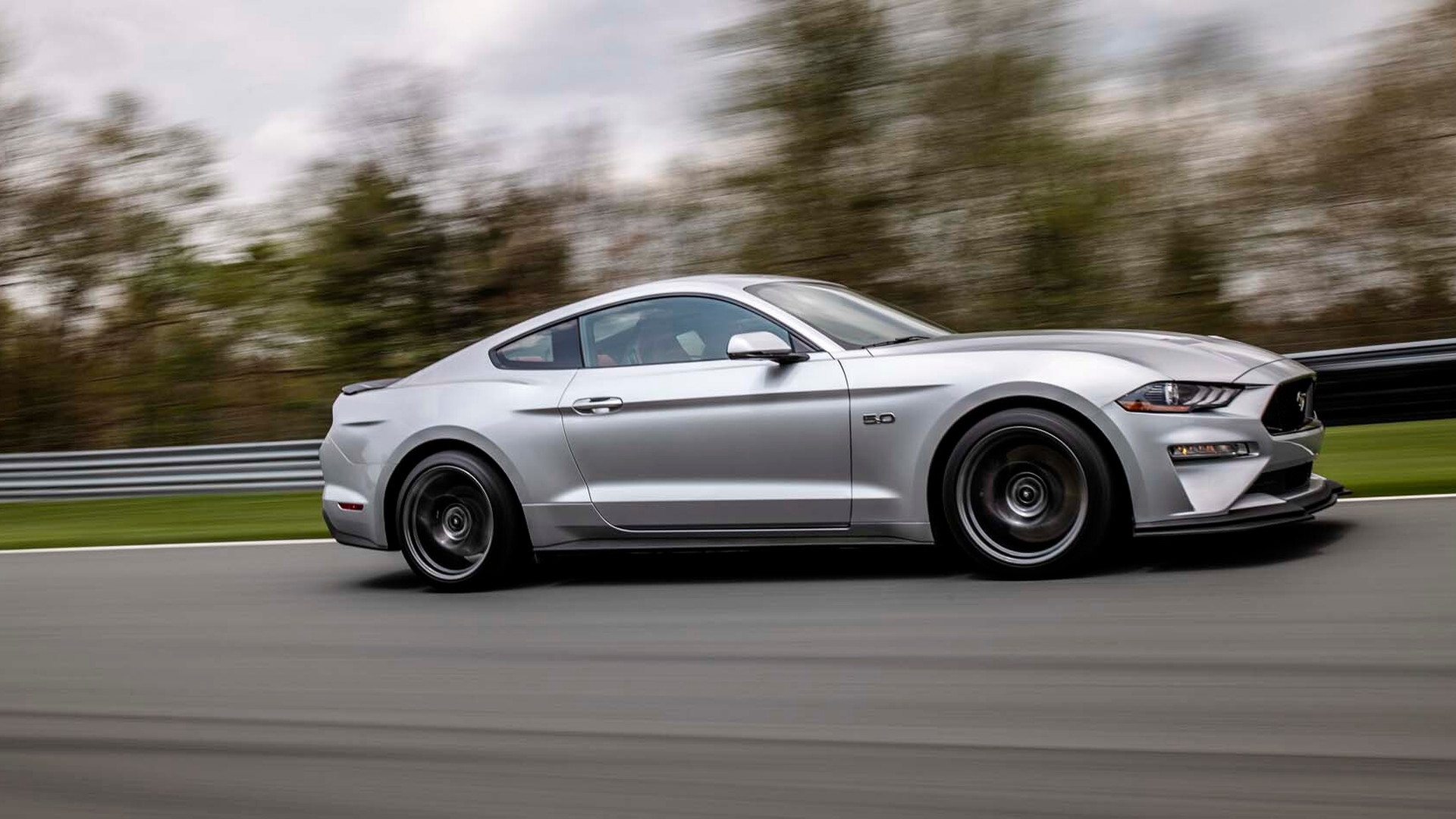 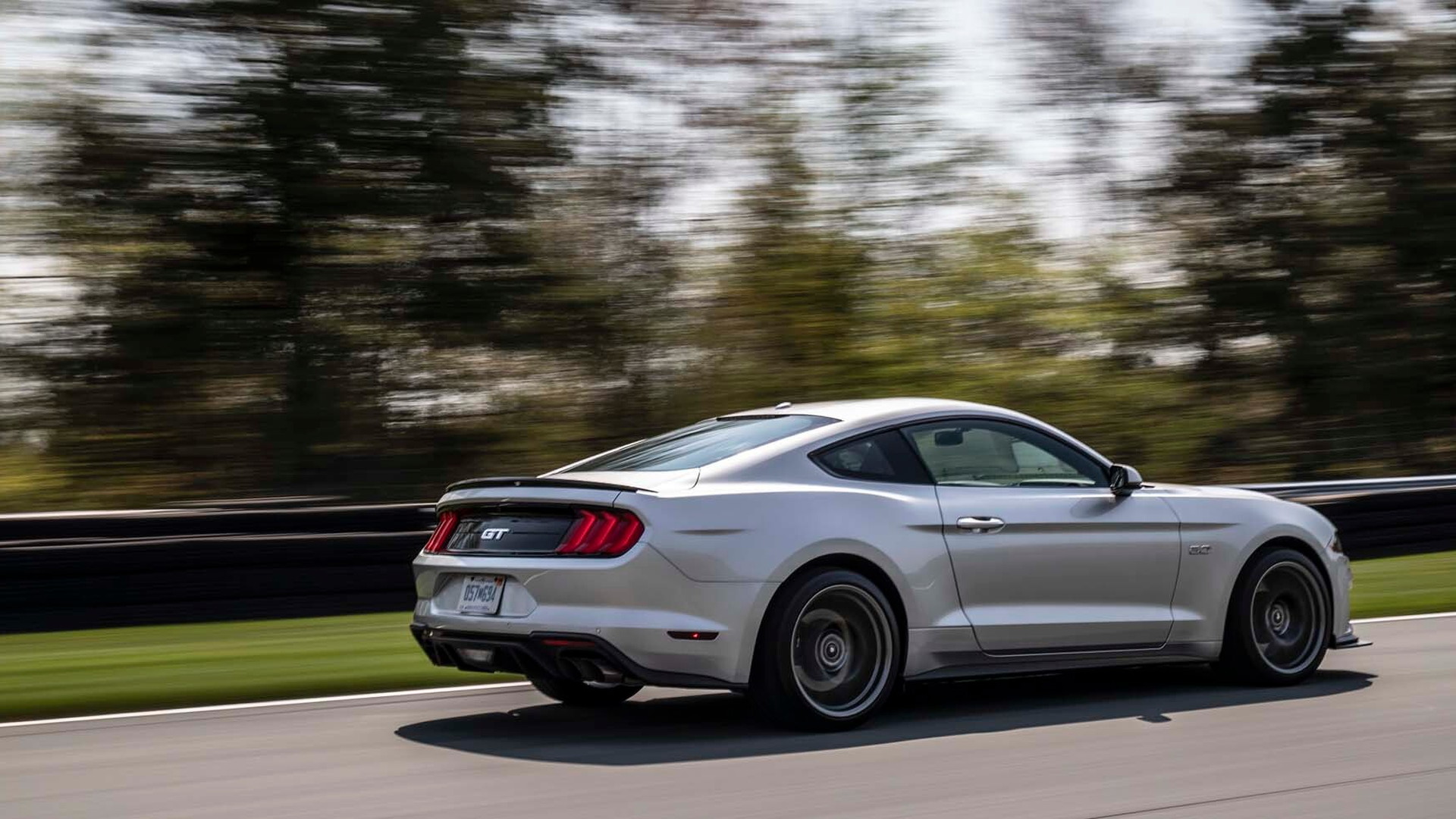 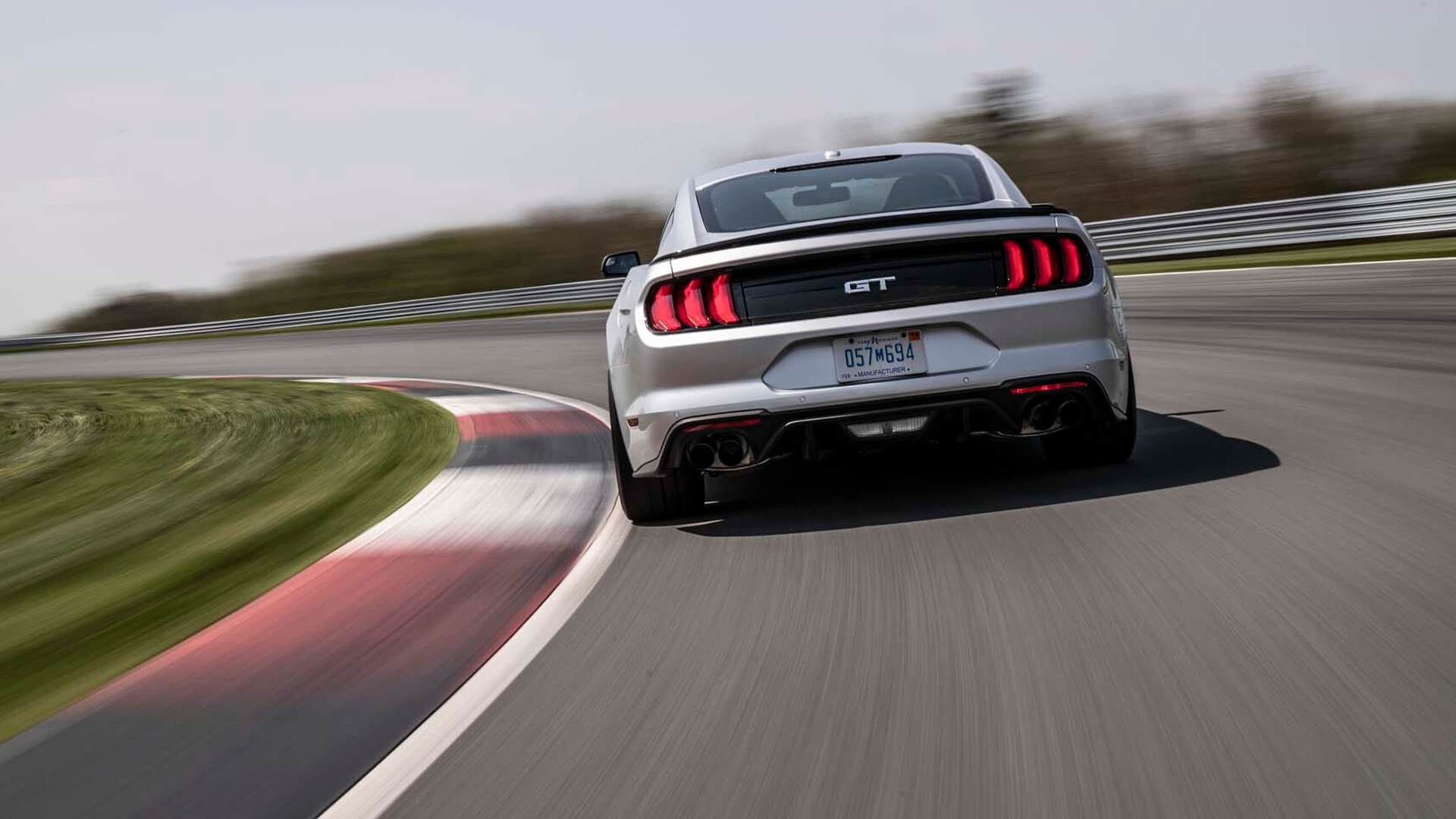 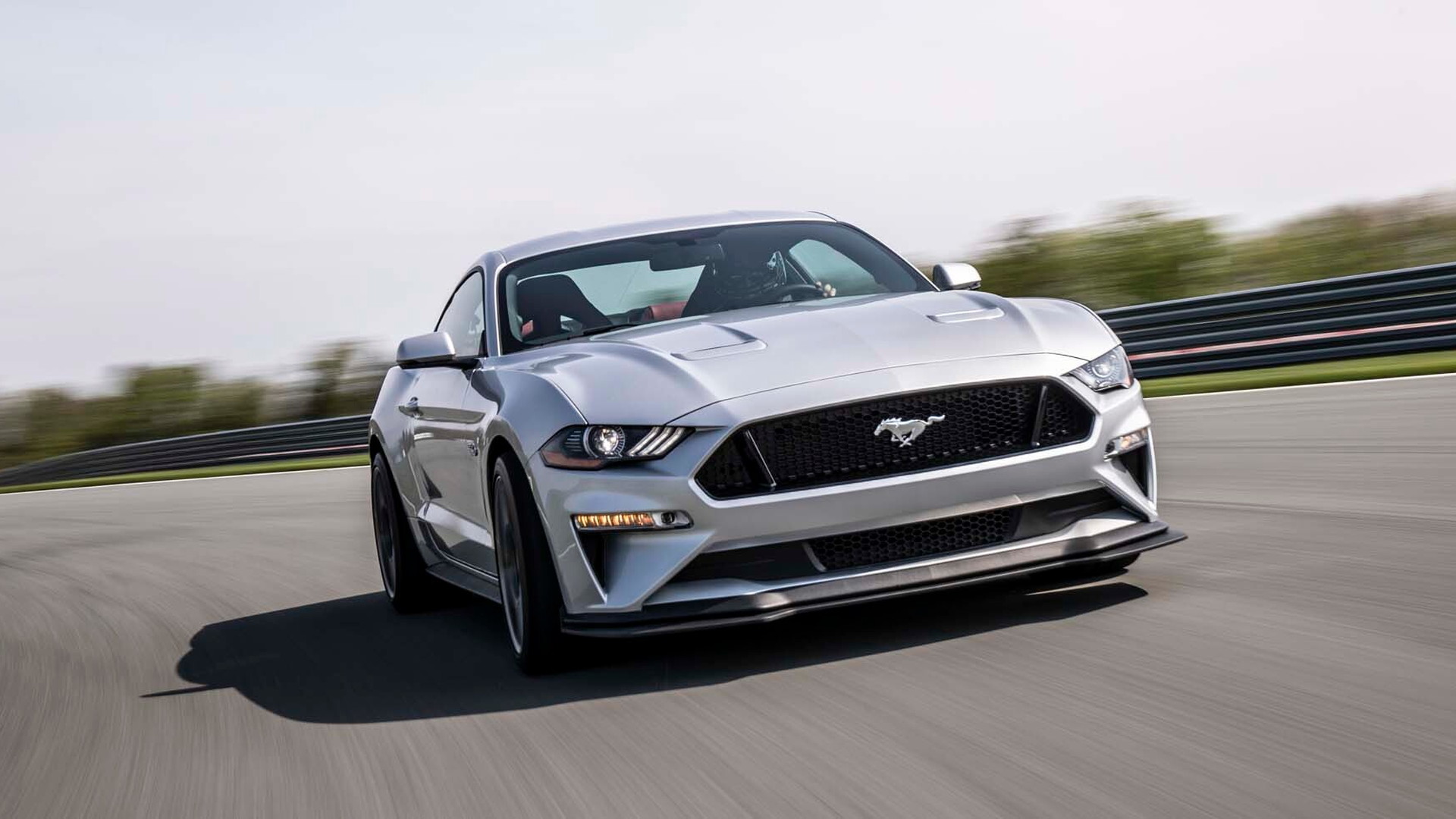 The Ford Mustang was born a pony car, but it’s worked tirelessly for most of the last decade to move past its roots. To become a true sports car.

The reintroduction of the Boss 302 in 2012 came close, but only in 2015 did Ford finally ditch the Mustang's solid rear axle for modern technology and an independent rear suspension.

Despite its new rear end, the Mustang hasn’t been able to shake off all its past. It’s larger than ever, and when the road buckles, the Mustang bobs and weaves more than a sports car should.

For good measure, Ford wraps 19x10.5-inch front and 19x11-inch rear aluminum wheels in large 305/30 Michelin Pilot Sport Cup 2 superhero tires that are so wide, they stick out from the fenders (which are 1.5 inches wider than Performance Package Level 1 tires and the same as the Shelby GT350R’s front tires).

The same Torsen limited-slip differential with a 3.73 axle ratio as Performance Package Level 1 handles the rear end, but the electric power steering system’s been recalibrated for quicker response.

A new front splitter–inspired by the 2012 Boss 302 Laguna Seca’s splitter–that sticks out 3 inches around the front corners creates about 24 pounds of downforce at 80 mph, while 6-piston Brembo brake calipers clamp down on massive 15-inch rotors up front to haul things back to reality.

How does it all work? Does it cure what’s left of the Mustang’s handling shortcomings?

I blasted around the track at Monticello Motor Club on Wednesday, in a Kona Blue Mustang GT equipped with the Performance Package Level 2, as heavy storm clouds rolled into the area. It’s clear Ford’s finally done what it should have in 2015.

Bomb into a corner hot, brake hard in a straight line, clutch in and downshift from 4th to 2nd, turn the steering wheel, look to the apex, and roll quickly into the throttle. This Mustang responds with flat precision. With the new package, the Mustang finally has the suspension setup it’s needed since the 6th generation launched three years ago.

Though there’s no Shelby badge, this Mustang has shockingly little body roll. It manages weight transfer in corners more smoothly, and the stiffer springs and stabilizer bars mean the Performance Package 2 Mustang doesn’t bob and weave on cracked roads like a prizefighter, though the wide, sticky 305s want to explore every crack and crevice they roll over on public roads.

The magnetically controlled shocks—something the Mustang GT’s desperately needed—help the stiffer suspension setup keep everything firm and controlled without being harsh or jarring.

The extra 24 pounds of downforce from the front splitter gets its due on the straights, and it’s even noticeable on the street. The front end jitters around less and feels more confident than a Performance Package Level 1-equipped Mustang.

It’s about midway through a corner just before the apex when it’s suddenly clear how abundant the grip is from the super-sticky 305 Cup 2 tires. For a hot second it’s as if rubber might be peeling off in layers through the corner, but in reality it’s not.

The more responsive steering calibration is welcome and gives the Mustang more smooth point-and-shoot agility. Regardless of the various steering modes, we prefer the Normal setting for its moderately hefty feel.

We didn’t get much time to play around with the new package, though. As the sky opened up and the rain started coming down, the sticky Cup 2 tires–damn near racing slicks–wanted to give up the ghost and slide sideways. We were quickly pulled from the race track.

While tail-out antics are fun, those looking to daily drive a Mustang GT with Performance Package Level 2 will quickly realize the issue rain poses. A Michelin spokesman told Motor Authority that Cup 2s should not be driven through any amount of standing water or in anything more than a light sprinkle of rain due to the very low tread pattern and no real ability to dispel water. Want a Performance Package 2 Mustang? Better have a spare car unless you live in Texas, Arizona, or Southern California.

After the Mustang launched with its first performance package, its handling still couldn’t compare to the crisp maneuvers in Chevy’s Camaro SS.

Now there’s hardly any daylight between the two sports cars. We used to call them muscle cars, but with handling like this, the Mustang’s clearly evolved well beyond its pony-car roots.