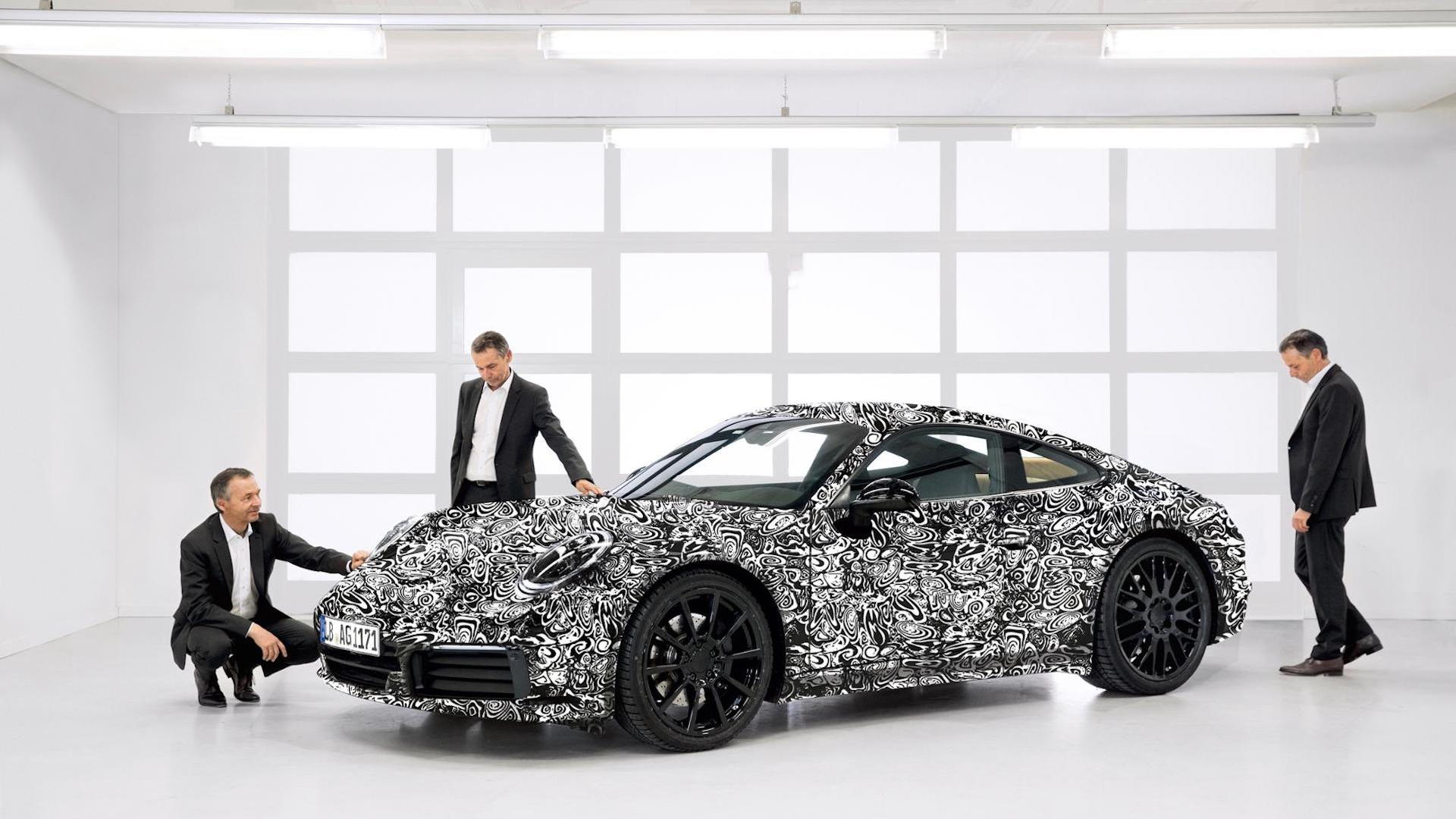 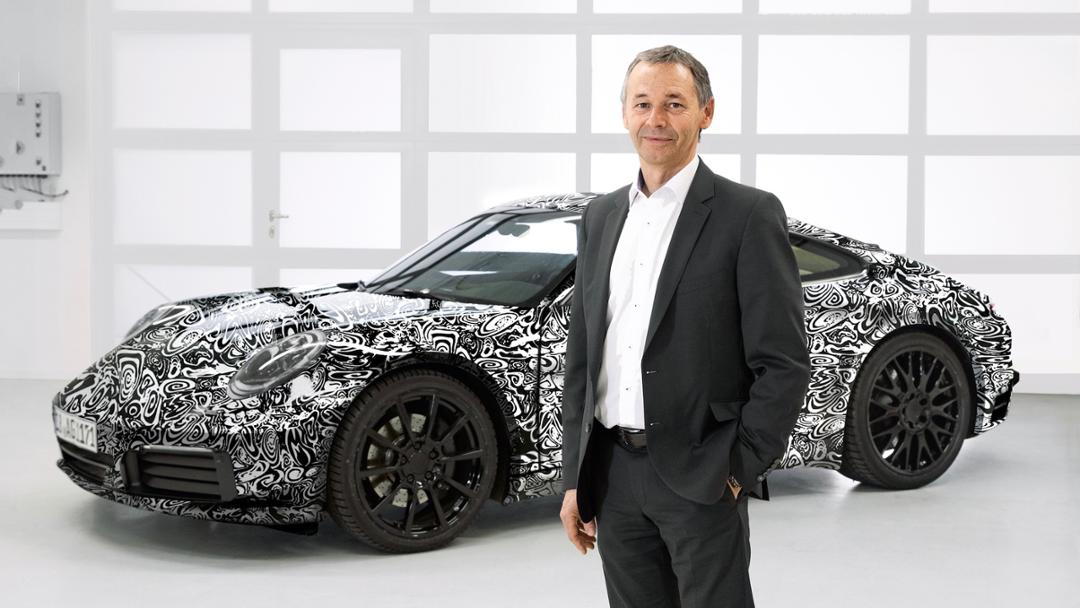 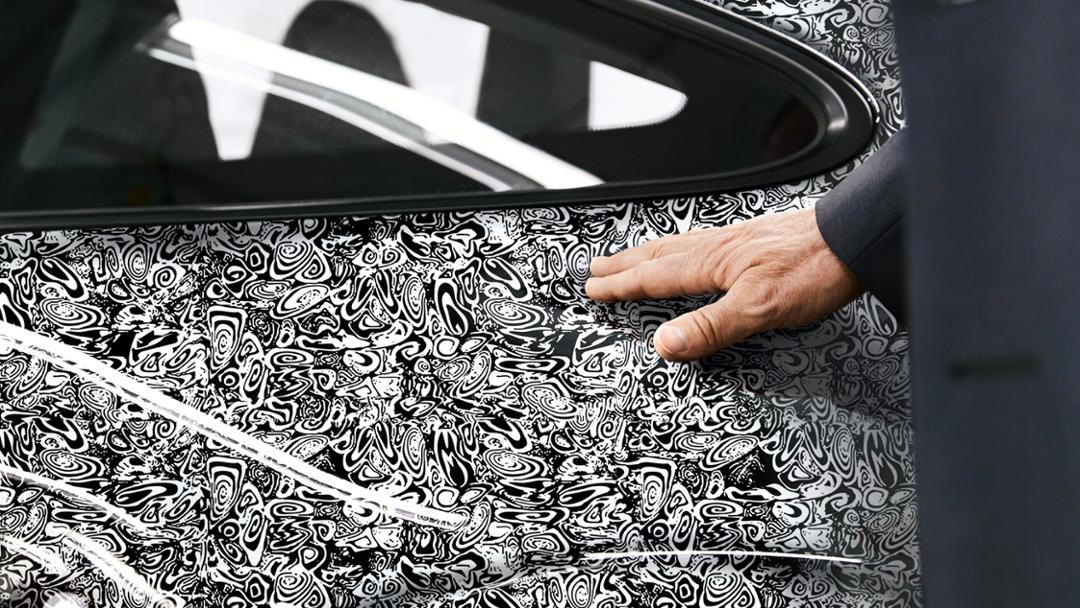 Porsche promises the next-generation 911 will be the same sports car we know and love, only better. On Friday, the brand released official teaser images and a lengthy preview of the 992-generation 911 touching on the topics of autonomous driving, connectivity, and electrification.

The teaser images feature August Achleitner, chief engineer for the 911 range, and his latest pride and joy concealed under swirled camouflage, though we know the car will be wider than the current 911. Other design elements are carefully hidden. A previously leaked image published earlier this week showed the car's rear end, which features a thin LED strip light bar and an expansive black accent piece. The front fascia remains more of a mystery, but evolution, not revolution, looks to be the motif. 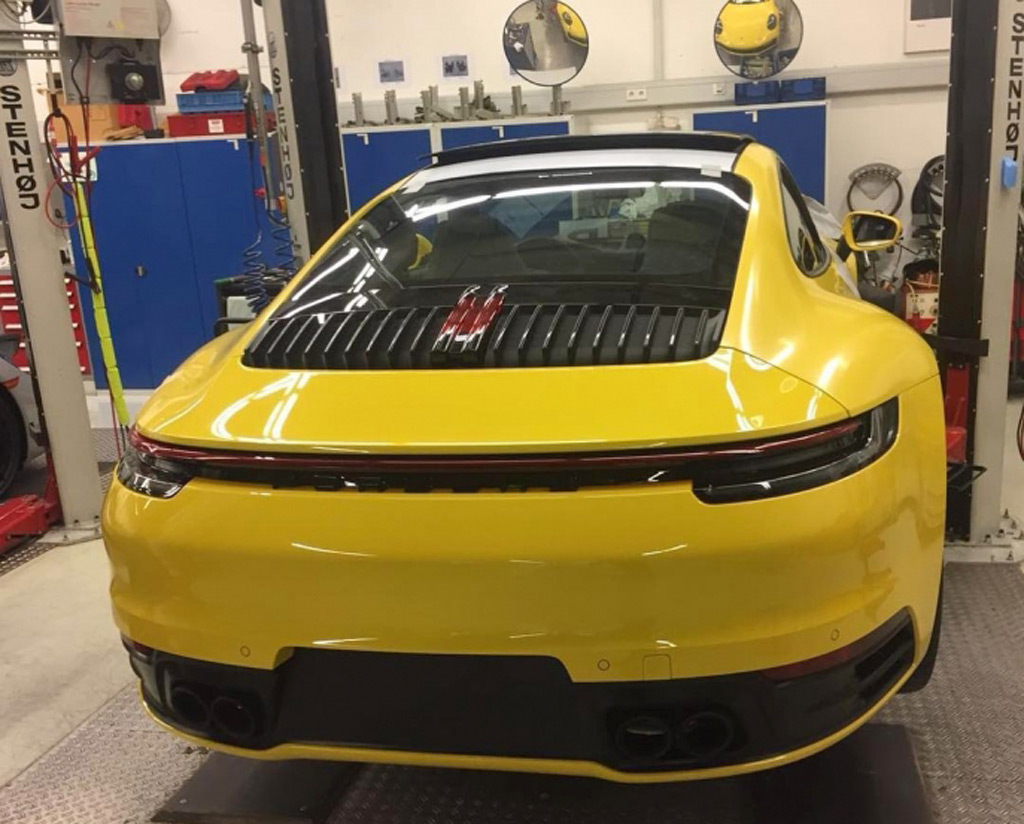 In Porsche's press release, Achleitner concedes that an electrified 911 isn't out of the question for the future. “Two years ago I’d have said no way. Today I wouldn’t categorically rule it out,” he says. We know a 911 hybrid was previously on the table for the current-generation car, but it was ultimately killed off due to weight. The 992 911 will be a different story, however, as a plug-in hybrid is likely.

He also says self-driving technology has little to no place in a 911 and proclaims, "a 911 will always have a steering wheel." He adds that if and when self-driving cars proliferate, the 911 will be one of the last to include the capability.

Porsche didn't preview the sports car's interior, but spy photos show a mostly digital dashboard with an analog tachometer. On the topic of connectivity, Achleitner wants to design digital interfaces between the car and driver that are as timeless as possible. He wants them to be “anything but contrived.”

Regarding power, the initial 911 Carrera and Carrera S models will feature a 3.0-liter twin-turbocharged flat-6 engine that debuted in the 2017 911. Right now, the mill makes 370 horsepower and 331 pound-feet torque in the Carrera and 420 hp and 368 lb-ft in the Carrera S. We do expect power bumps across the range.

Watch for the 2019 Porsche 911 to debut later this year ahead of a 2019 launch, and maybe, just maybe, we'll see a special Speedster model to send off the current 991-generation 911 with style.