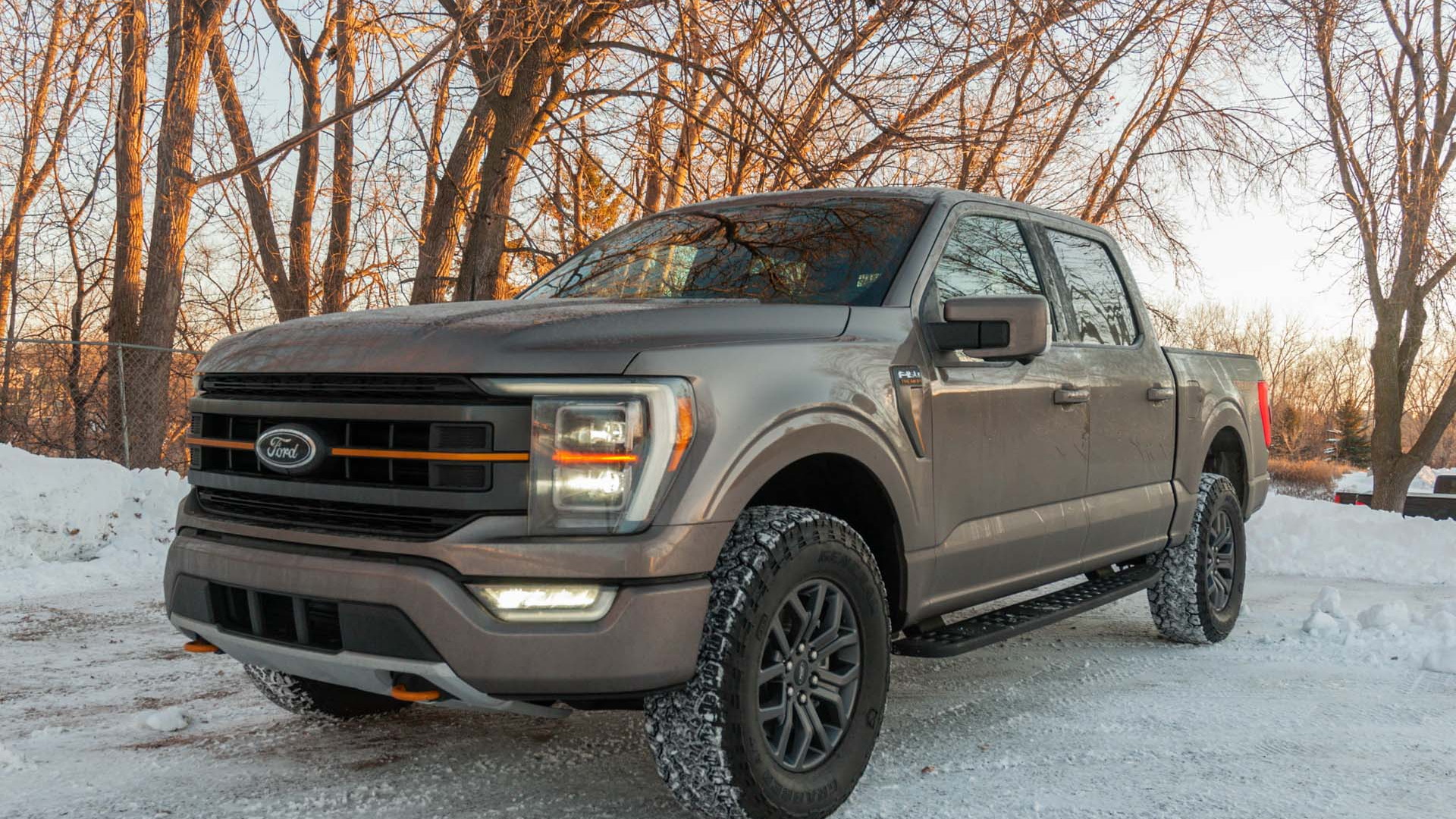 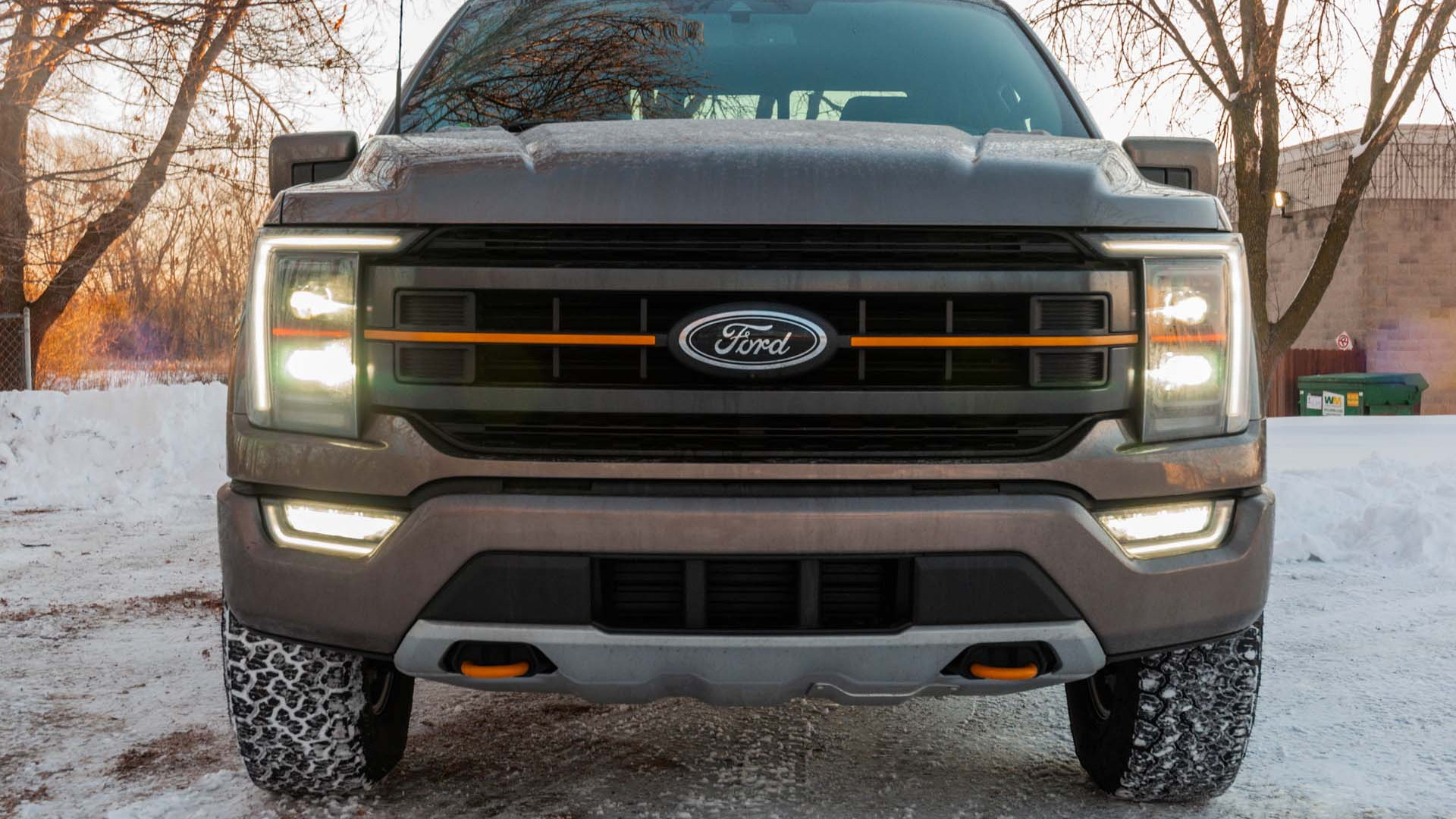 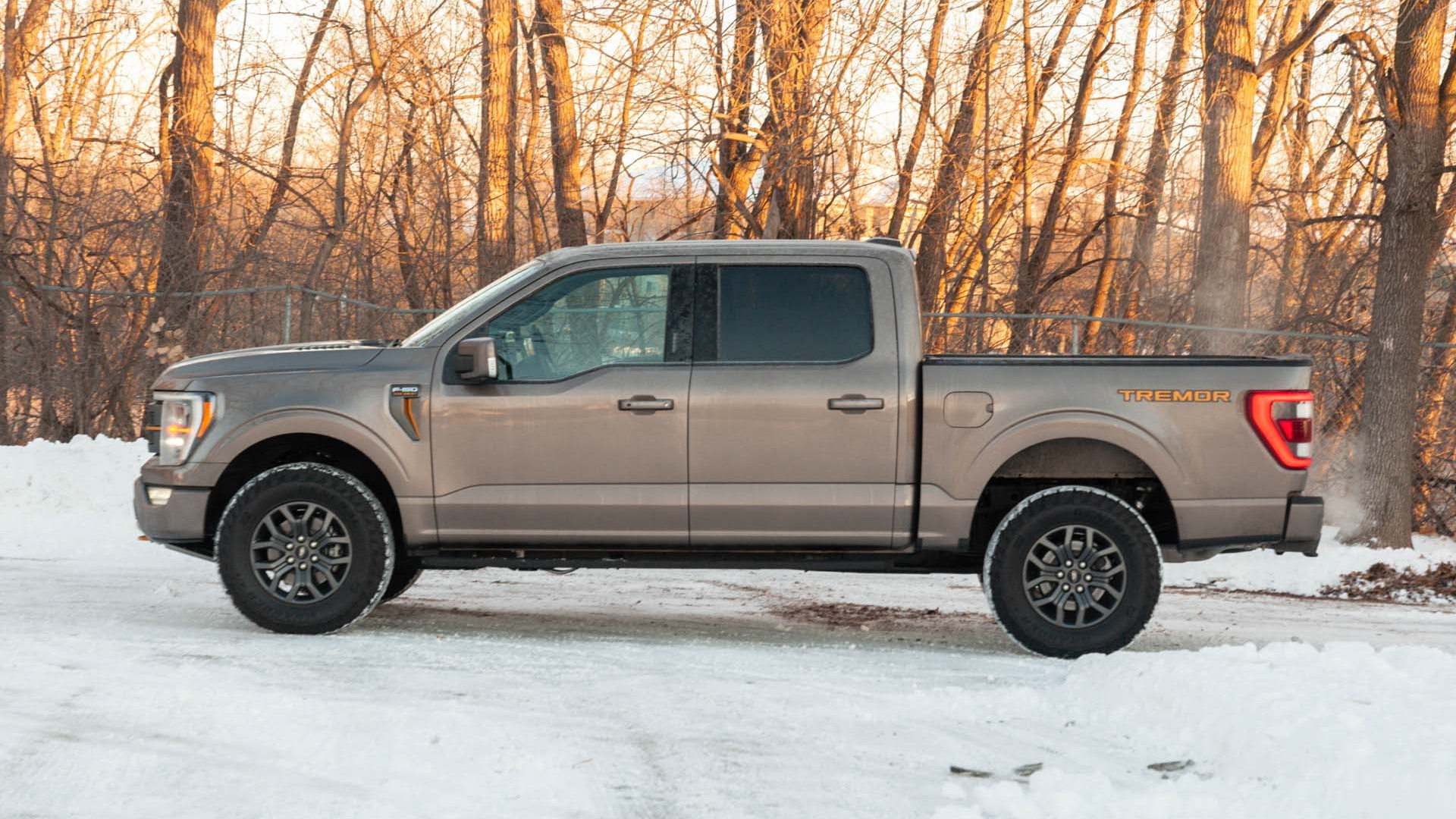 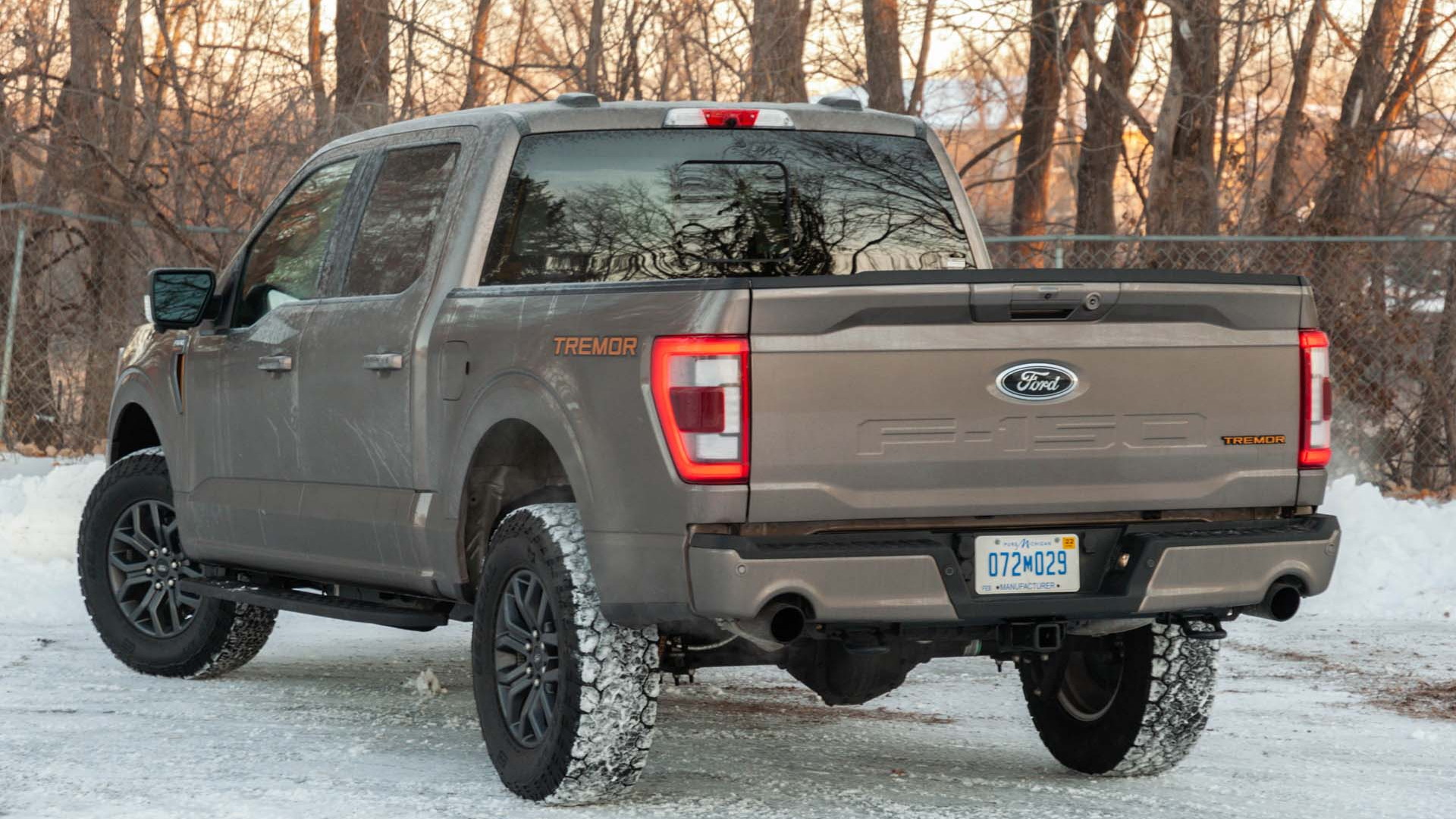 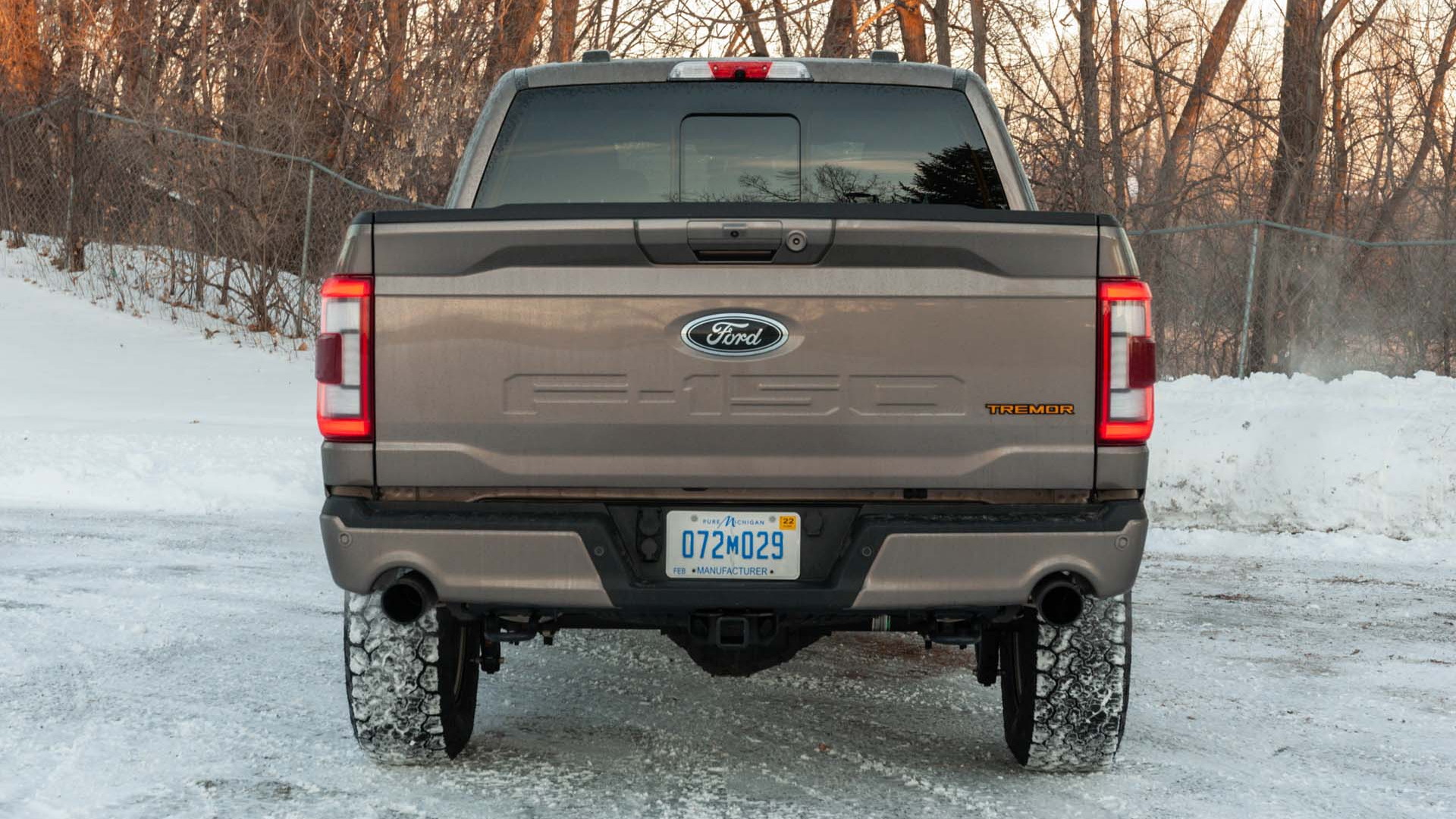 The fantasy of owning a Ford F-150 Raptor looms large, but in reality not everyone wants to live with a truck that’s nearly 8 feet wide. Partly for those people Ford’s applied the Tremor sauce to the F-150.

The 2021 Ford F-150 Tremor introduced a variant to the refreshed lineup that strikes just right, Goldilocks, thanks to revised suspension, all-terrain tires, and muscular look while retaining its livability and capabilities to get work done in a factory-built package.

After spending some time with the 2021 Ford F-150 Tremor during a Minnesota snow storm, and the resulting mess that it left behind, I realized why the Tremor might actually add up as a strong value, too.

More than FX4, less than Raptor

The Tremor sits in between the Lariat and King Ranch in a crazy and confusing F-150 Build-Your-Own-Adventure configuration matrix at $51,200. Starting with a solidly-equipped F-150, where the Tremor stands out is its suspension. It gets returned springs all around aimed at keeping the tires more firmly in contact with the ground while adding ground clearance, according to Ford. New, softer monotube shocks up front and twin-tube shocks in the rear are paired with Tremor-specific hub knuckles and revised upper control arms.

Each hub has an 18-inch matte-finish aluminum wheel wrapped in 33-inch General Grabber AT tires. The wheels and tires alone add an inch to this truck’s track to make it more stable both on the road and over terrain.

Versus a more pedestrian F-150, this brings 1.5 inches more travel in the rear and an inch more up front, and it adds up to 10.9 inches of ground clearance. The approach angle is up to 27.6 degrees, breakover angle is up to 21.2 degrees, and departure angle is increased to 24.3 degrees. A skid plate has been added up front to cover the vulnerable bits.

Ford pulled from the Bronco’s playbook for the Tremor and installed Trail Turn Assist software. This feature allows the Tremor to engage the brake and drag the inside rear wheel while in four-wheel drive (Hi or Lo) to reduce the turning radius for tight turns. Trail Control and Trail One-Pedal Drive are onboard and act essentially like cruise control for off-road use, allowing the driver to set a speed and have the truck manage the throttle and the brake.

The result of the above changes on the road is a softer, more comfortable, yet still livable F-150. Despite being able to tow up to 10,900 lb or carry up to 1,885 lb, the Tremor’s more settled over broken Midwest pavement than other F-150s thanks to the wider stance, knobby Grabber All Terrain Tires, and softer suspension tune.

The Tremor’s tune is more refined and better at absorbing bumps in the road than the stiffer Chevrolet Silverado 1500 Trail Boss. As a tire snob, I’ll admit to turning my nose up at first when seeing the General-branded tires on the Tremor, as it’s considered a Tier 2 tire supplier in the U.S. But not only is the Grabber All-Terrain rubber much quieter on the road than the Goodyear Wrangler Duratrac tires found on both the Chevrolet Silverado 1500 Trail Boss and Ram 1500 Rebel (both of which present a noticeable whir at any speed), but they seem to handle much better in the snow and cold despite not being a winter tire. And while the importance should be placed on how a tire performs instead of how it looks, the Grabber ATs will appease those that place a value on the knobby look of BFGoodrich KO2s.

While more comfortable than a standard F-150, the Tremor isn’t as unwieldy in day-to-day situations like the parking lot at kids’ swim lessons as the wider Raptor would be. Yet it still stands out from the rest of the F-150 lineup. Every Tremor can be spotted thanks to orange accents, a muscular hood, dual exhaust tips, fixed and fixed running board.

Inside the cabin features orange accents to match the exterior, auxiliary power switches to wire up accessories, and seats that feature Tremor stitching on upper trim models. Ford’s trick folding gear selector and flip-over center armrest can create a flat work space, and the digital gauge cluster is one of the better layouts in the business, with creative packaging that puts all essential vehicle information in large, easy-to-read readouts. It also integrates navigation instructions from Apple CarPlay, which few vehicles are capable of doing.

Unlike most of the F-150 lineup, the Tremor isn’t the “Have It Your Way” of pickup trucks. Every Tremor has a SuperCrew cab and 5.5-foot bed, with a 3.5-liter twin-turbo V-6 under its hood making 400 hp and 500 lb-ft of torque, hooked to a smooth-shifting 10-speed automatic transmission. The 5.0-liter V-8 and more powerful, and efficient, hybrid V-6 aren’t available. Four-wheel drive is standard, though base Tremors have a part-time four-wheel-drive system while mid and high option package Tremors feature both a mechanical part-time and clutch-based full-time four-wheel-drive system. A rear locker is standard while a Torsen limited-slip differential for the front is an option.

The Tremor starts at a somewhat reasonable $51,200, but like any F-150, options can inflate the price rapidly. My tester had a sticker price of $70,095 thanks to niceties such as a 12.0-inch digital gauge cluster, Bang & Olufsen 18-speaker sound system, and leather-trimmed heated and cooled seats.

Ford has done well in channeling some of the Baja-like image of the Raptor and mixing in easier day-to-day usability at a lower cost. It’s the fantasy you can live with easily day-to-day.