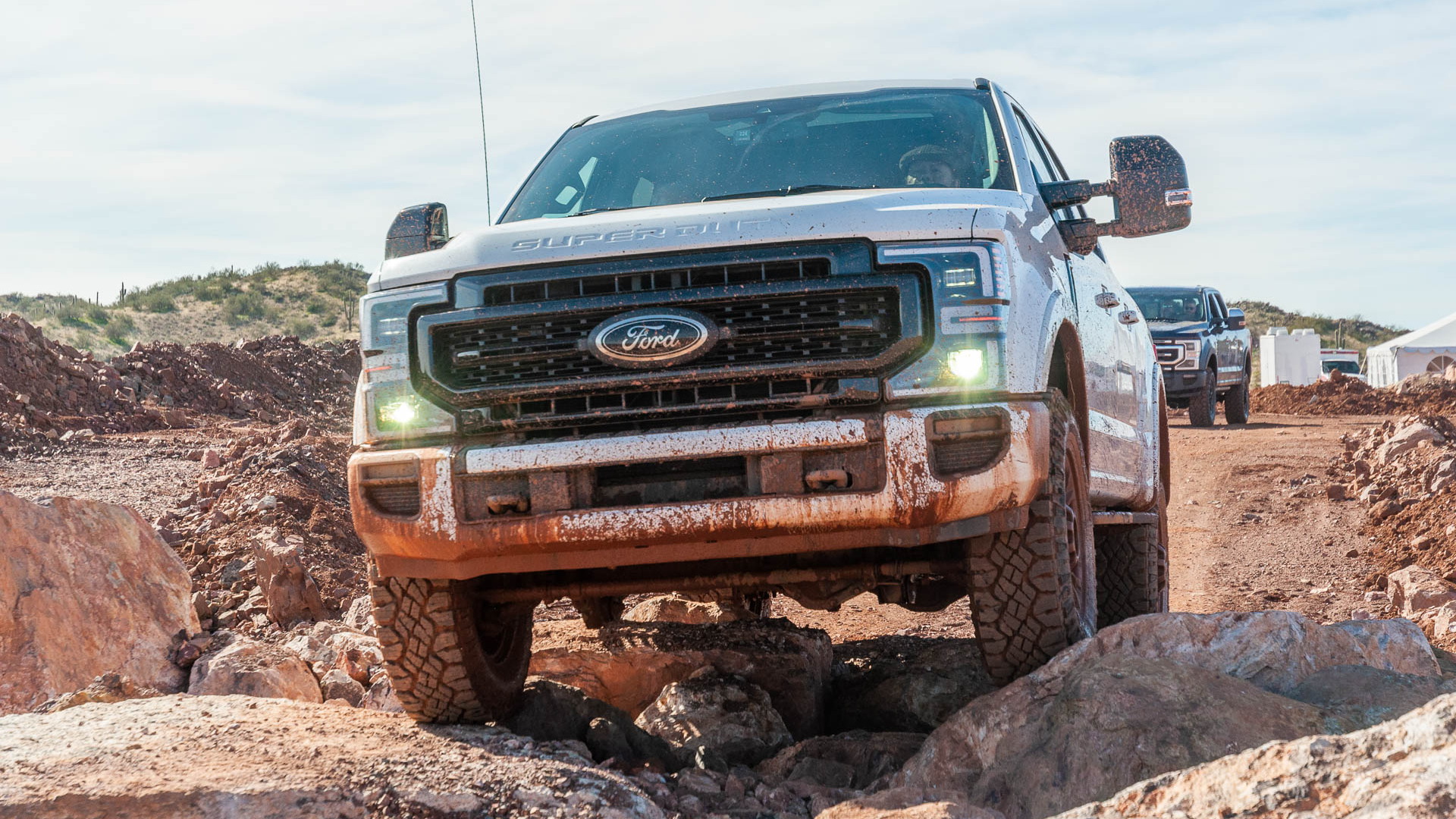 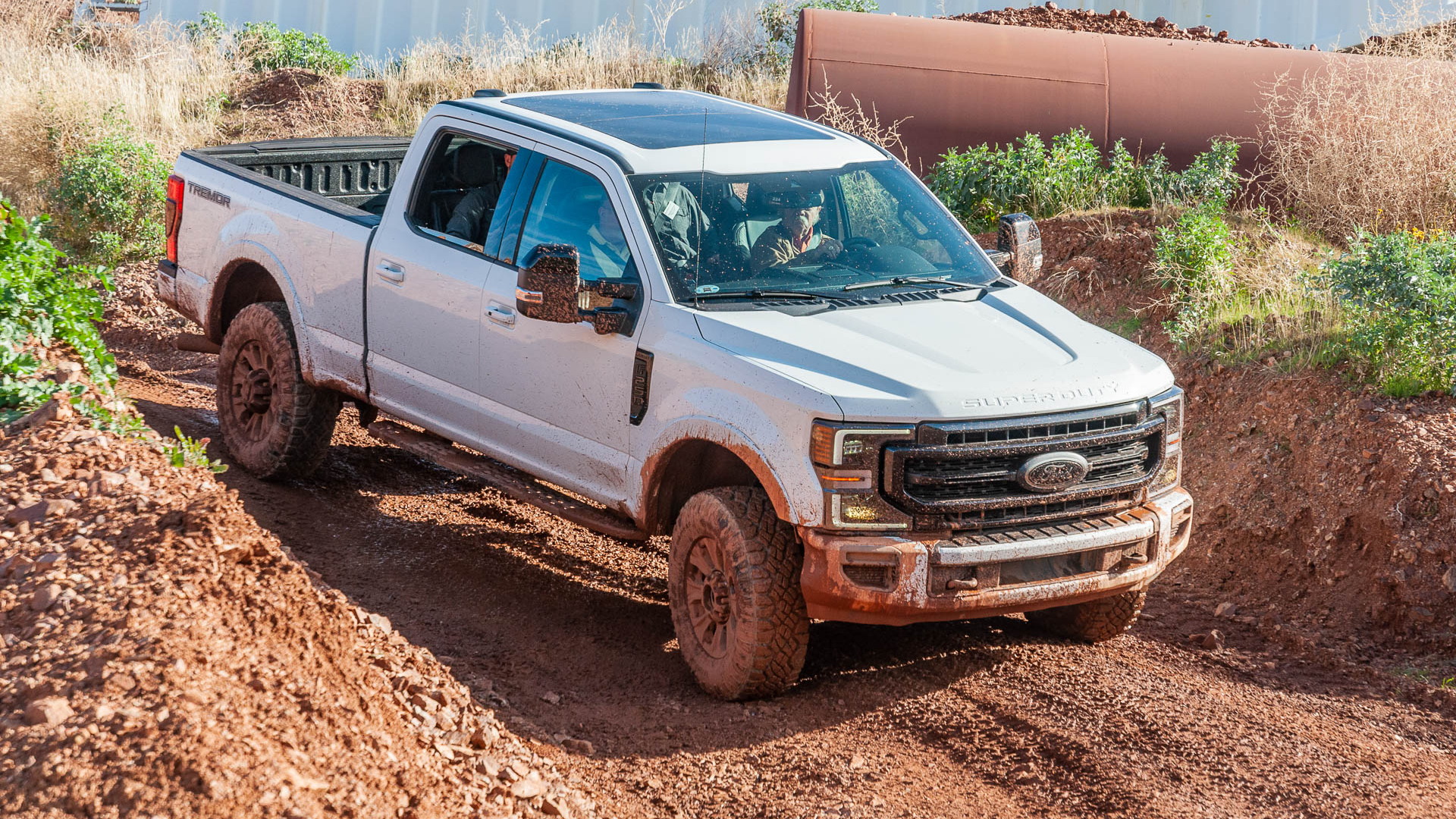 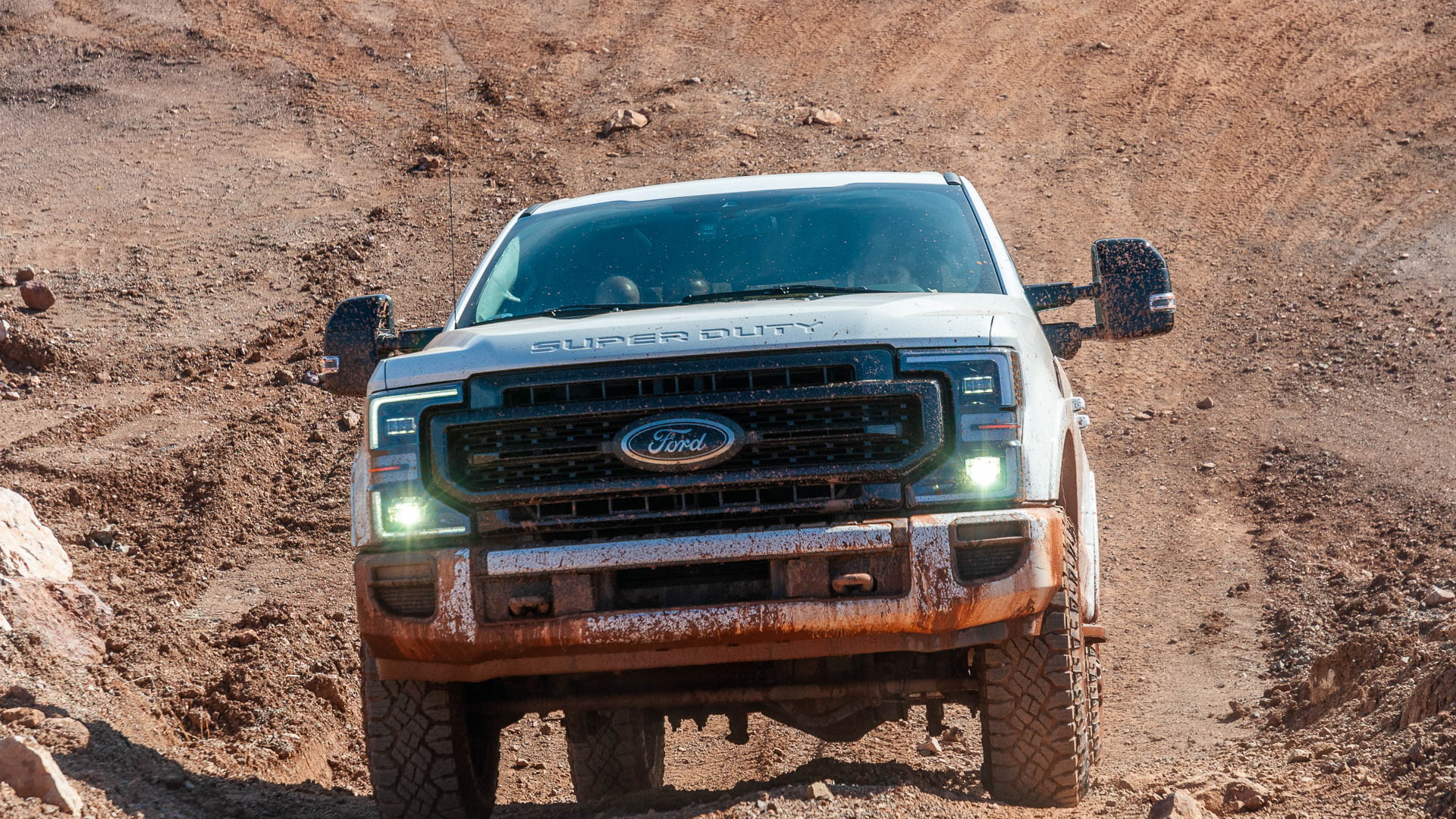 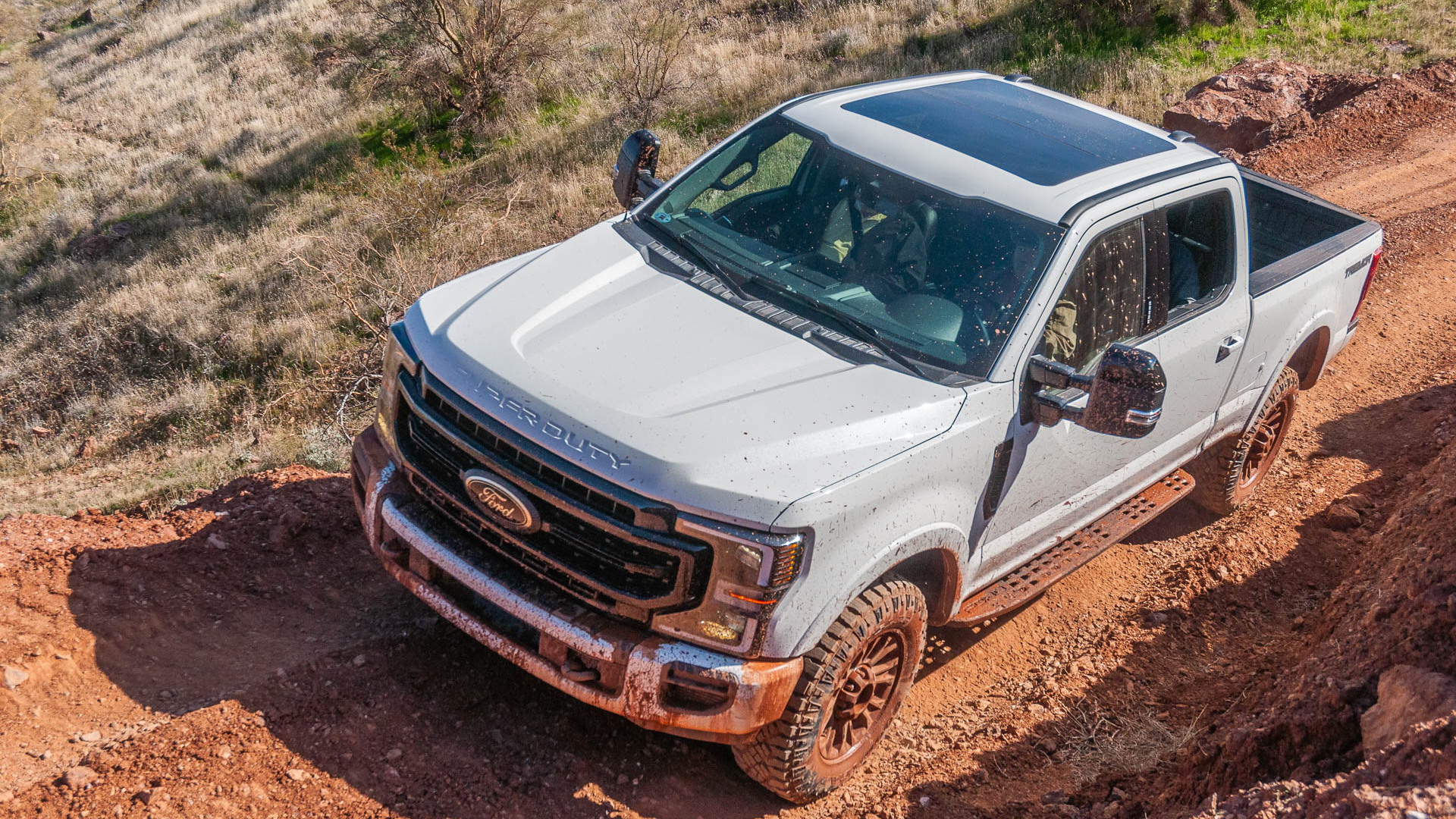 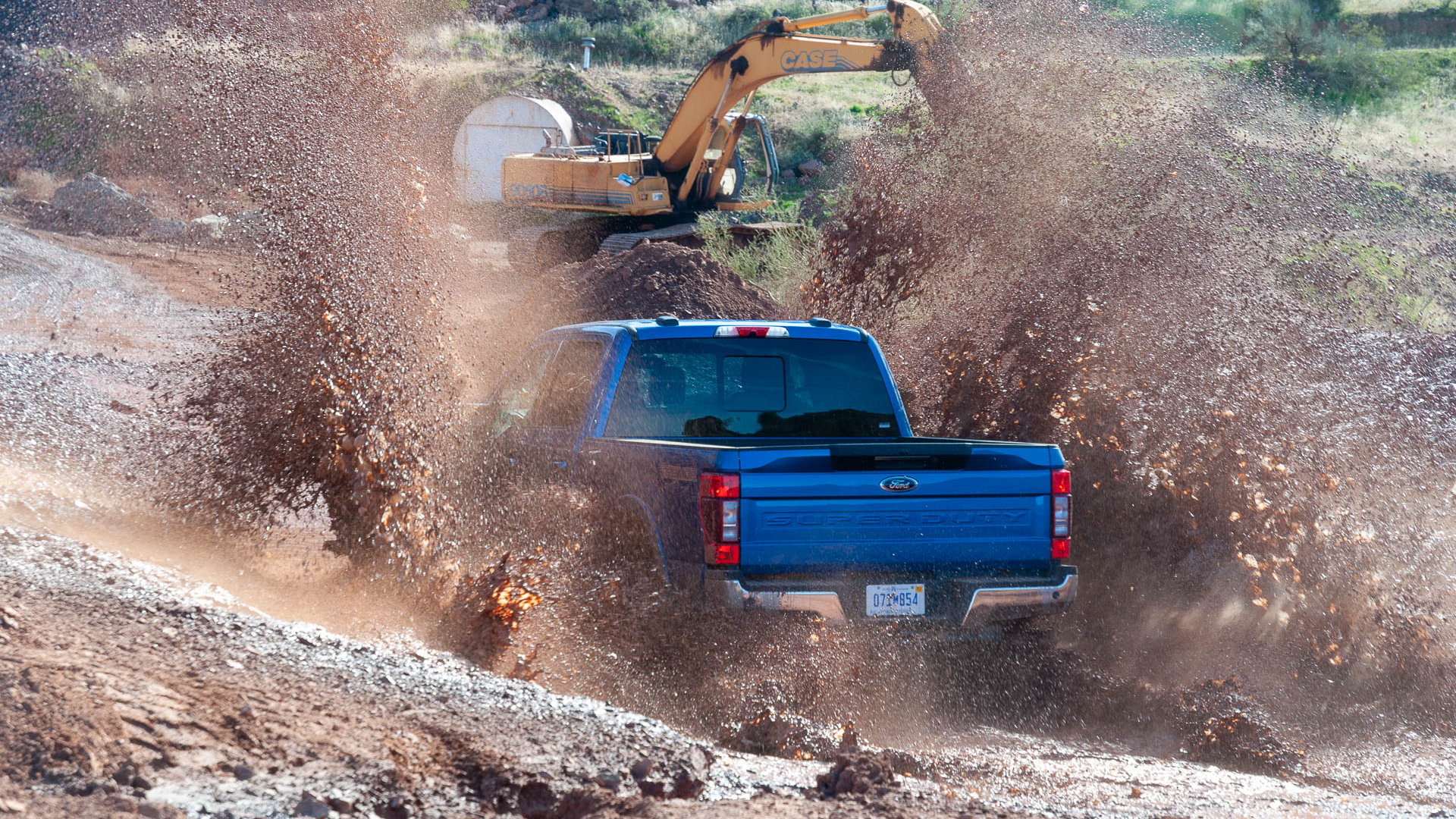 What can tow a pair of elephants, tackle serious off-road adventures without turning on its high-capacity cooling fan, and tower over nearly every passenger car on the road?

If you said the fictional Canyanero from “The Simpsons,” you aren’t wrong, but the correct answer is the 2020 Ford Super Duty Tremor.

With the updated 2020 Super Duty range comes a new Tremor off-road package with big off-road tires, upgraded suspension, and a choice of engines. The package is available for the XLT, Lariat, King Ranch, and Platinum trims for $3,975, plus the cost to upgrade to one of the two premium engines

Ford invited Motor Authority to Phoenix, Arizona, to put this massive truck to the test at an off-road playground built in the Custom Landscape Materials Big Horn Quarry. The drive included slogging through deep mud, climbing up steep hills, and tackling undulations that would knock parts off many vehicles. I also towed an RV up a hill and drove around on lonely desert highways. 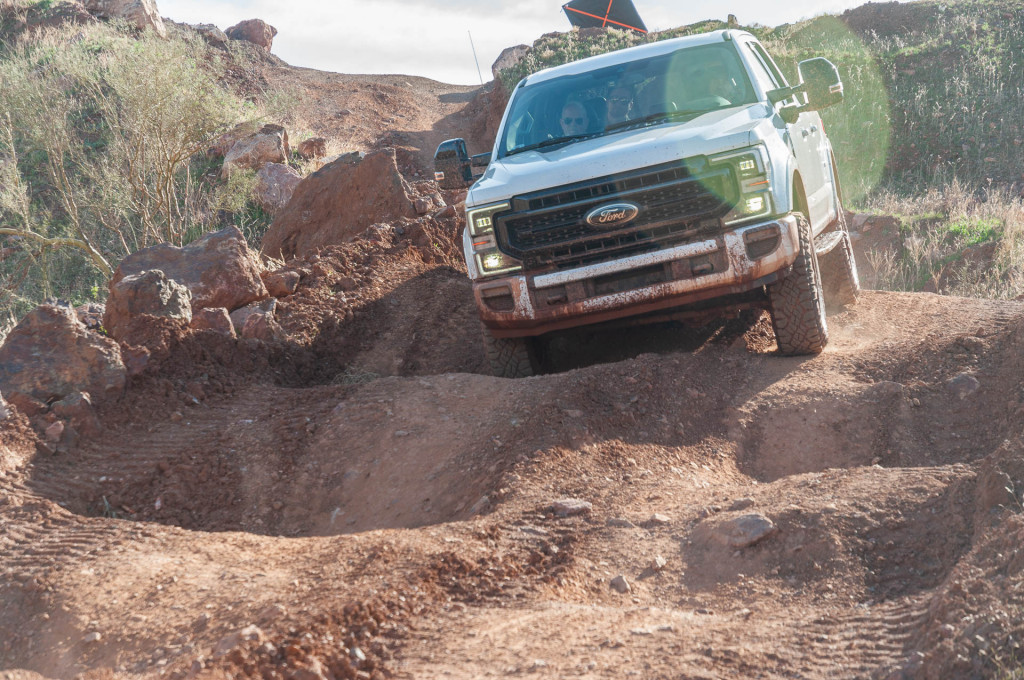 The Tremor doesn’t have a disconnecting sway bar or a locking front differential. Instead, its strategy for off-road capability is simple but effective.

It starts with 18-inch black alloy wheels wrapped in knobby Goodyear Wrangler Duratrac LT285/75R18 off-road tires, which, at 35 inches, are the largest diameter tires on a heavy-duty pickup truck. Apparently truck owners brag about this kind of thing.

A smaller 24 mm (vs the standard 28 mm) front sway bar is swapped in for better articulation. Softer springs are paired with 1.7-inch piston twin-tube dampers while a lift of 25 mm in the front and 12 mm in the rear comes from different springs.

In total, the Tremor has 10.8 inches of ground clearance, which is nearly two inches more than a standard single-rear-wheel F-250.

A Dana limited-slip front differential sits up front, the rear has a locking differential, and Trail Control, which is essentially cruise control for low-speed off-roading situations, comes standard. A custom 12,000-pound Warn winch with a 70-foot synthetic cable and both wired and wireless remotes is available as a dealer-installed factory option $3,000. It lets the Tremor pull itself or other vehicles out of hairy situations.

Aside from its imposing stance, the Tremor can be picked out at a Ford dealership thanks to its black wheels, fender extensions, Raptor-like fixed running boards, available black trim and grille. It also lacks the large front air dam found on other Super Duty pickups..

Under the hood of any Tremor is a new, gas-powered 7.3-liter V-8 that churns out 430 horsepower and 475 pound-feet of torque. For an extra $10,795, buyers can opt for a 6.7-liter turbodiesel V-8 with 475 hp and 1,050 lb-ft of torque. Regardless of which engine is under the hood,power is sent to all four wheels via a 10-speed automatic transmission and a part-time four-wheel-drive system. 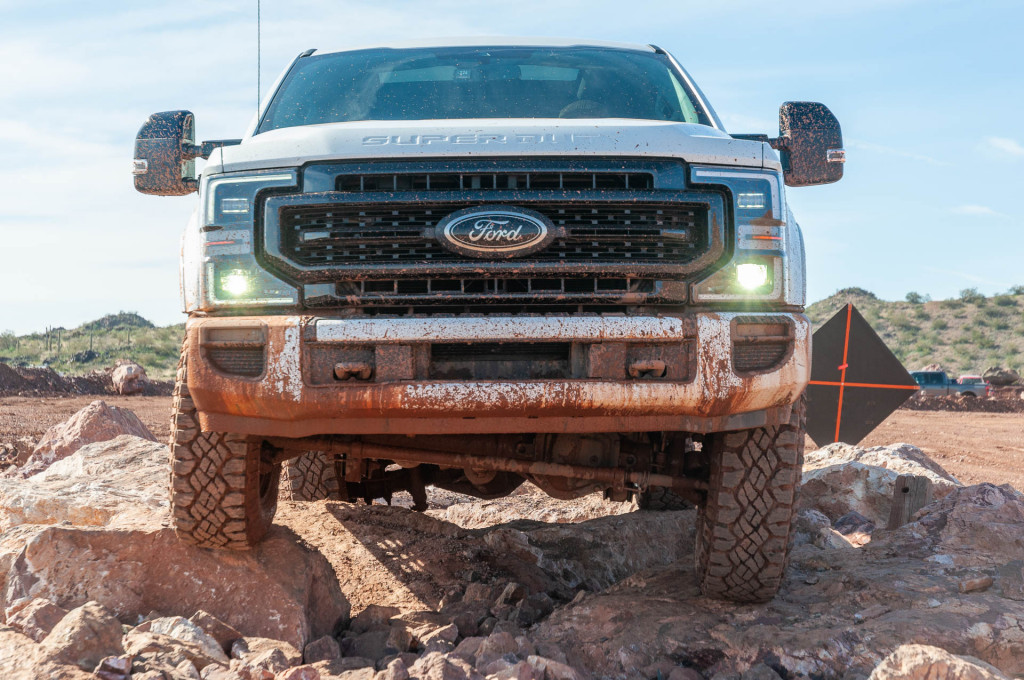 “You’re going to want to put the rear locker on,” a Ford Super Duty engineer told me from the backseat of a dark blue F-250 with the Tremor package as I approached a pile of boulders so large The Hulk himself couldn’t clear them without breaking a sweat. “And put it in four low.” 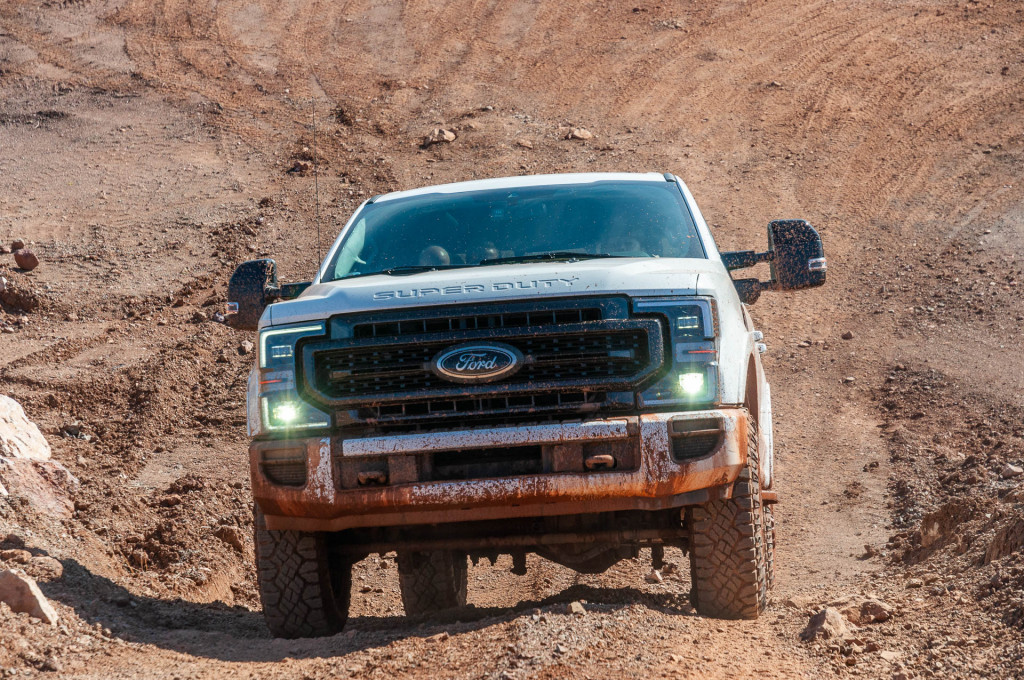 Continuing up a hill I didn’t engage the Trail Control system because that would have made it boring as I would have only had to pay attention to the steering. While I didn’t want to, I engaged the hill descent control, for testing purposes. It works far smoother than Toyota’s system with less clunking.

Next, the F-250 faced off against surface undulations that tested its ability to twist its suspension. A disconnecting front sway bar would’ve made this section easier, but the smaller front sway bar, off-road shocks, and ground clearance allowed the Super Duty to pass through the undulations without any clearance issues.

Deep mud that went up to the Super Duty’s hubs did little to slow the monster The 35-inch Duratracs chewed through the muck in 4WD High and crawled along the brown earth underneath.

The optional $3,000 Warn winch doesn’t have the longest synthetic cable available, but it does come with a wireless remote that can make things slightly easier, and possibly less messy than other winch solutions. I wasn’t allowed to get the Super Duty stuck and then winch it out, but I did witness the winch pull a semi cab up a (very small) grade.

Despite its off-road suspension and tires, it’s still rated to tow up to 15,000 pounds with a conventional hitch and 21,900 pounds with a gooseneck. It can also haul 4,210 pounds of payload (though not when towing all that weight).

With a 9,000-pound trailer on the Tremor’s rear hitch and the $2,045 7.3-liter V-8 under its hood, I pointed the F-250 Tremor up and down a 6% grade. The gas V-8 barely noticed the trailer and didn’t seem to break a sweat when accelerating to highway speeds. It’s a champ, and should make some buyers pause before hitting the option box for the pricey turbodiesel. The big off-road tires acted as a cushion that made the ride less bouncy and softer, yet there was almost no visible squat with the trailer hooked to the rear.

Unloaded, the 7.3-liter V-8 is quick enough, sounds really mean, and builds power resolutely as the revs climb. If the 7.3-liter is more than enough than the 6.7-liter turbodiesel V-8 is simply overkill with its four-digit torque figure. With a turbo that spools very quickly, the torque comes on like a freight train and never lets up until the truck is well past legal speeds.Notably, torque is limited to about 900 lb-ft in first gear to keep the transmission in tact.

The 10-speed automatic, paired with both engines, is a smooth operator around town and on the highway, but it hunts for gears when a trailer’s hooked to the truck. Engaging tow/haul mode does nothing to solve the issue as it doesn’t lock out any of the top gears.

Otherwise, the F-250 Tremor suffers from typical large truck issues. It’s a bear to park and pilot in tight space. It doesn’t particularly like taking turns, and the increased ride height means more body lean. The steering is also vague with enough on-center play that passengers won’t even notice if the driver sneezes with their hands on the wheel. 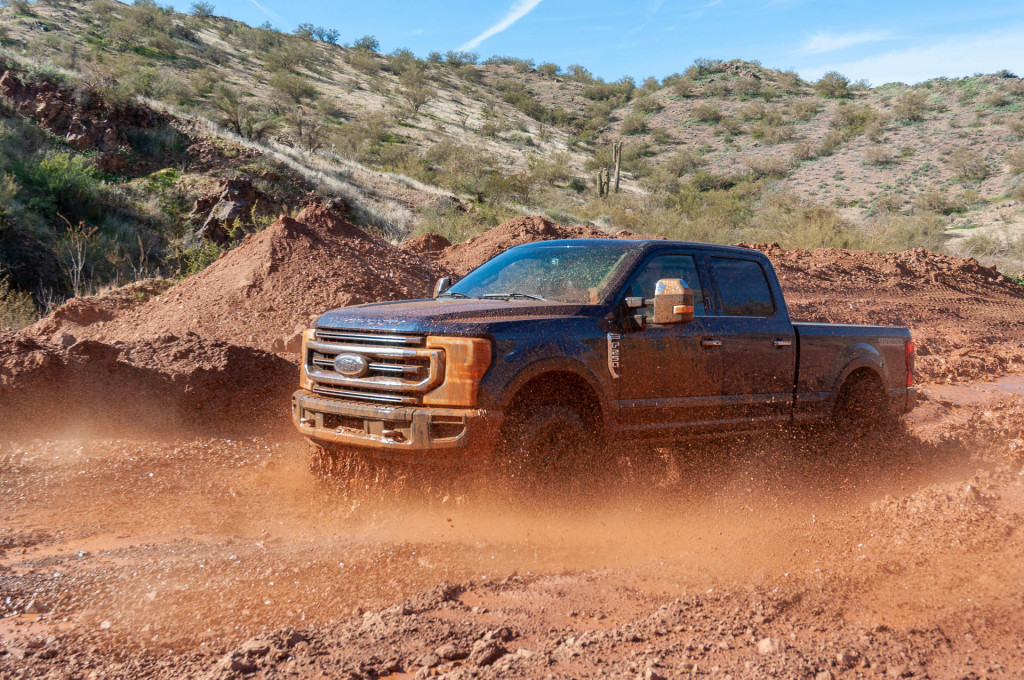 It may sound like an oxymoron, but the Super Duty you’ll want isn’t cheap even though the Tremor off-road package is. The cheapest F-250 with the Tremor package costs $54,985 including destination, and it only goes up from there.

The options list is a mile long. It ranges from the $10,495 turbodiesel engine to various rear axle ratios, a surround-view camera system, heated and cooled leather seats, and LED headlights and taillights. Choose the trim or options you want and this pickup can get really expensive really quickly. I drove an $87,630 F-250 Super Duty Platinum Tremor.

The Super Duty Tremor doesn’t have the full list of advanced off-roading hardware, but that doesn’t seem to matter. No pickup on the planet can do everything, from towing more than 20,000 pounds to dominating an off-road adventure, the way a Tremor can. Capability doesn’t come cheap.

Ford paid for travel and lodging at a large, confusing resort so Internet Brands Automotive could bring you this firsthand report.