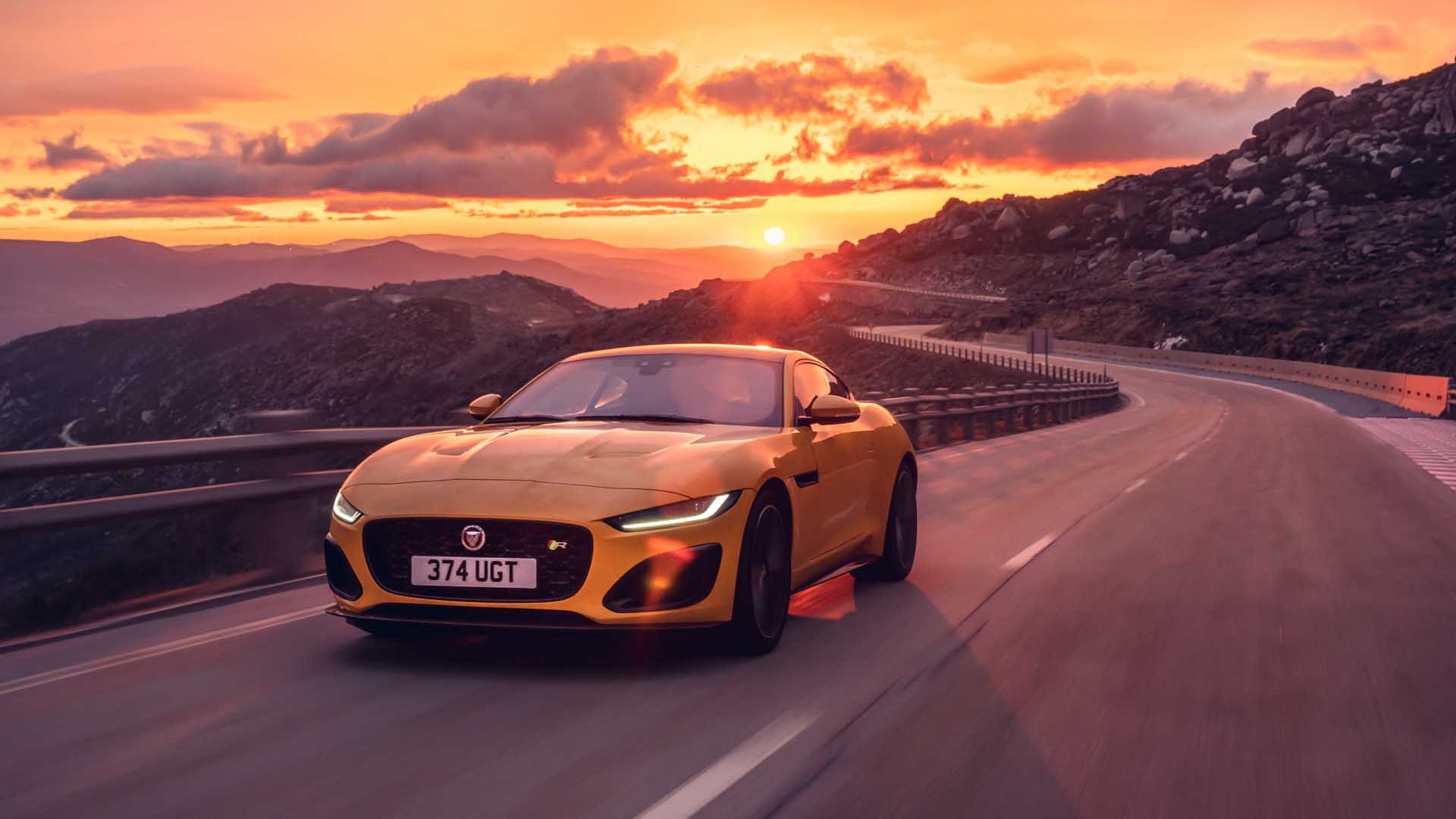 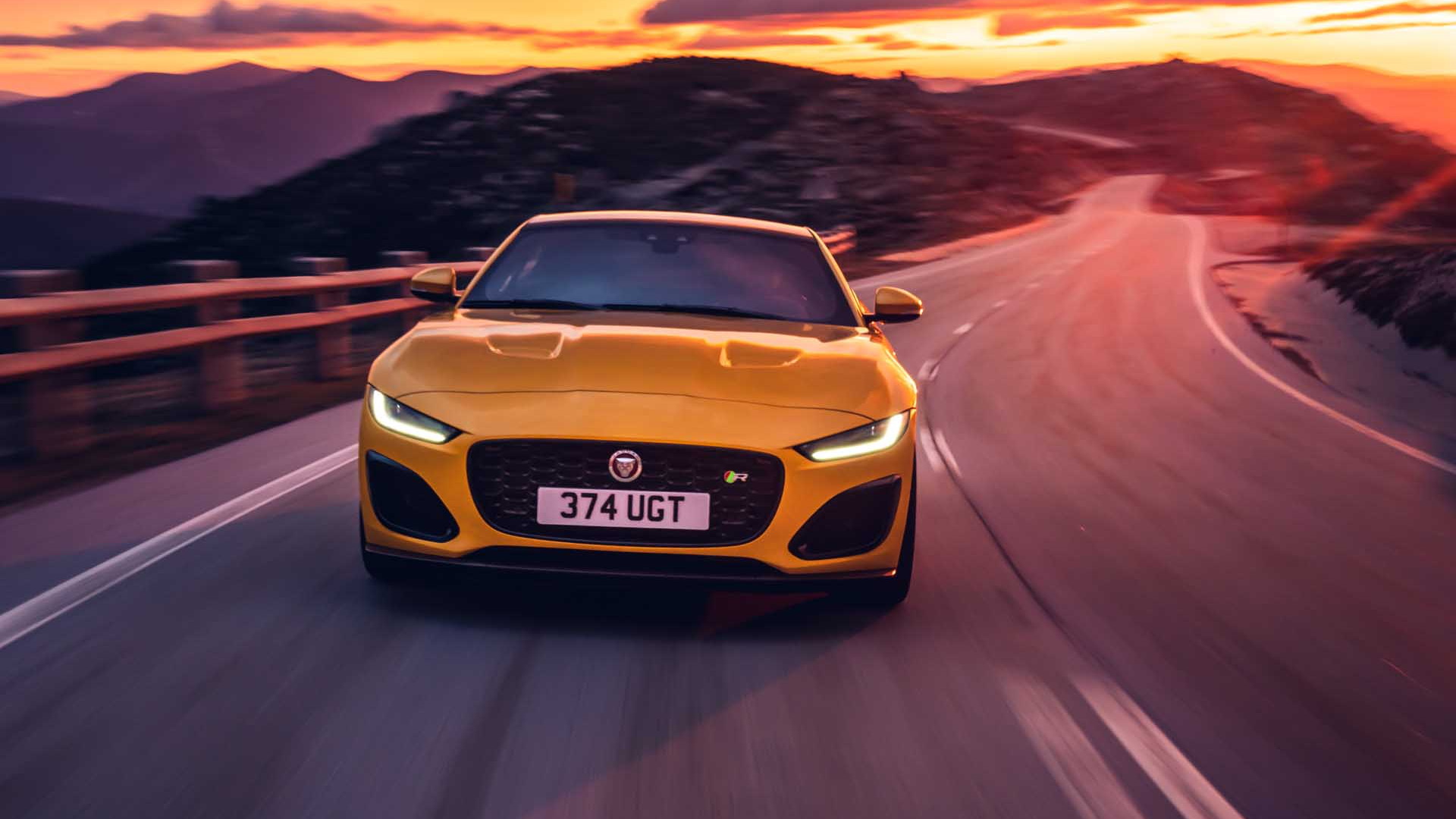 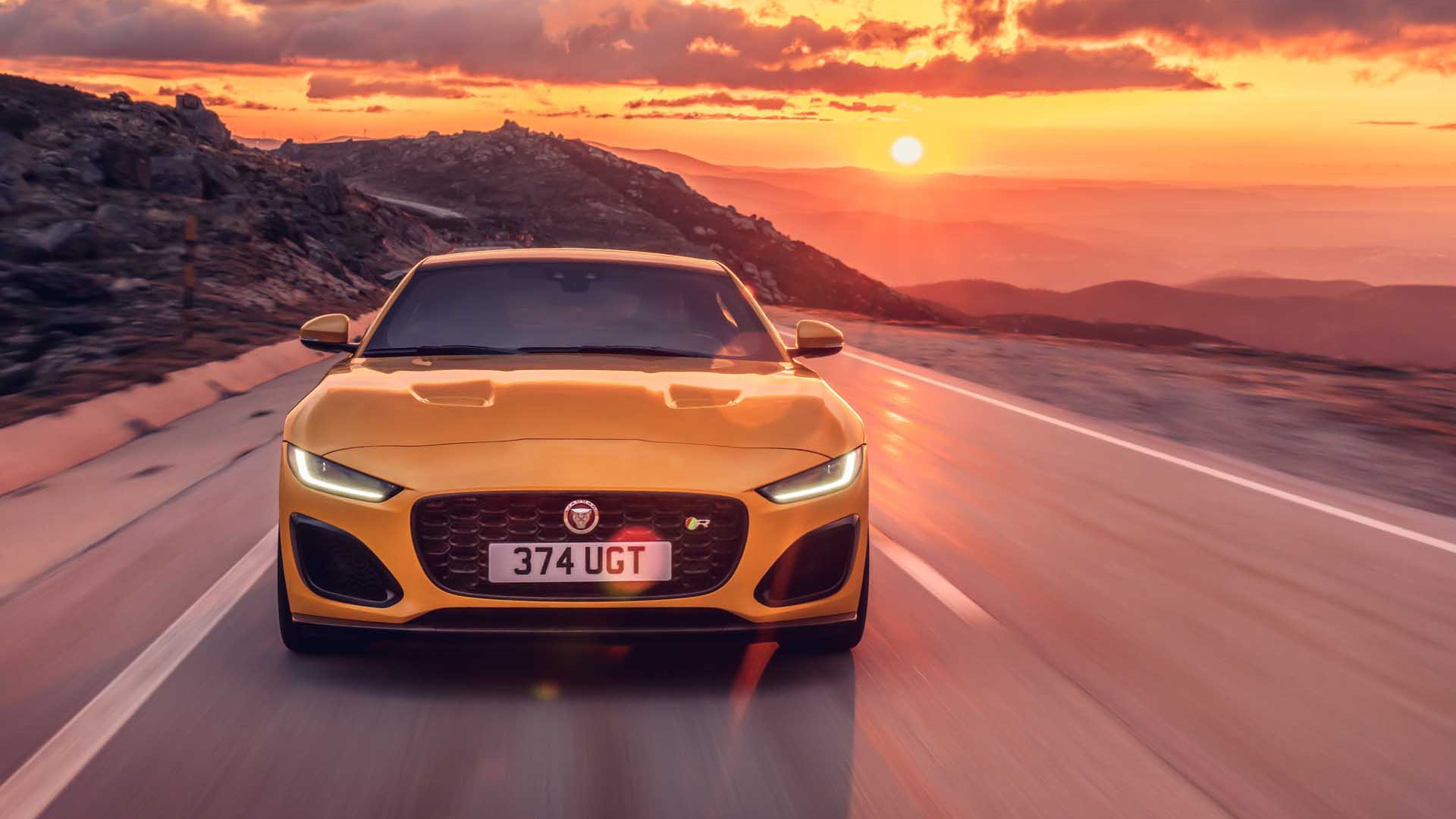 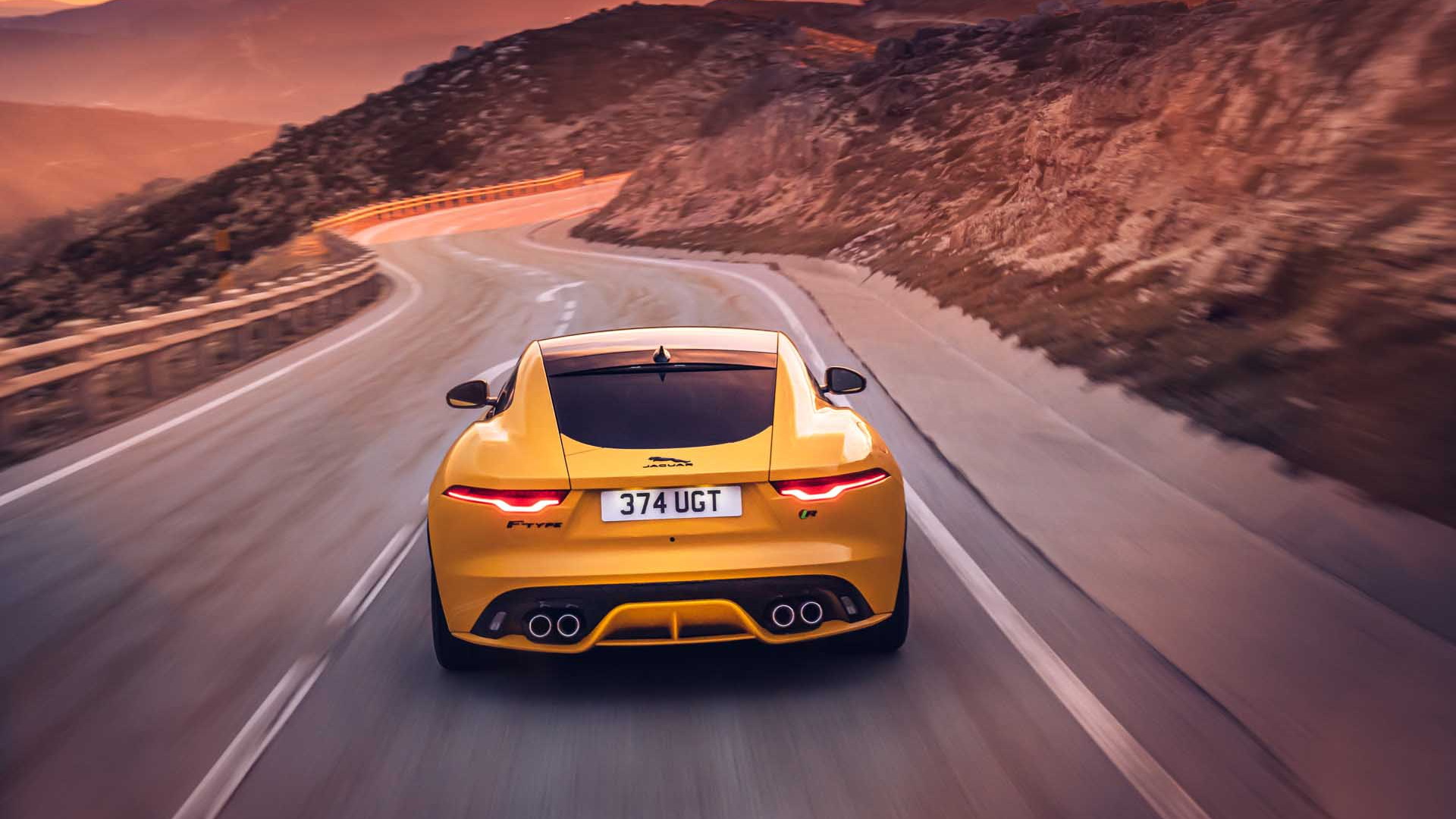 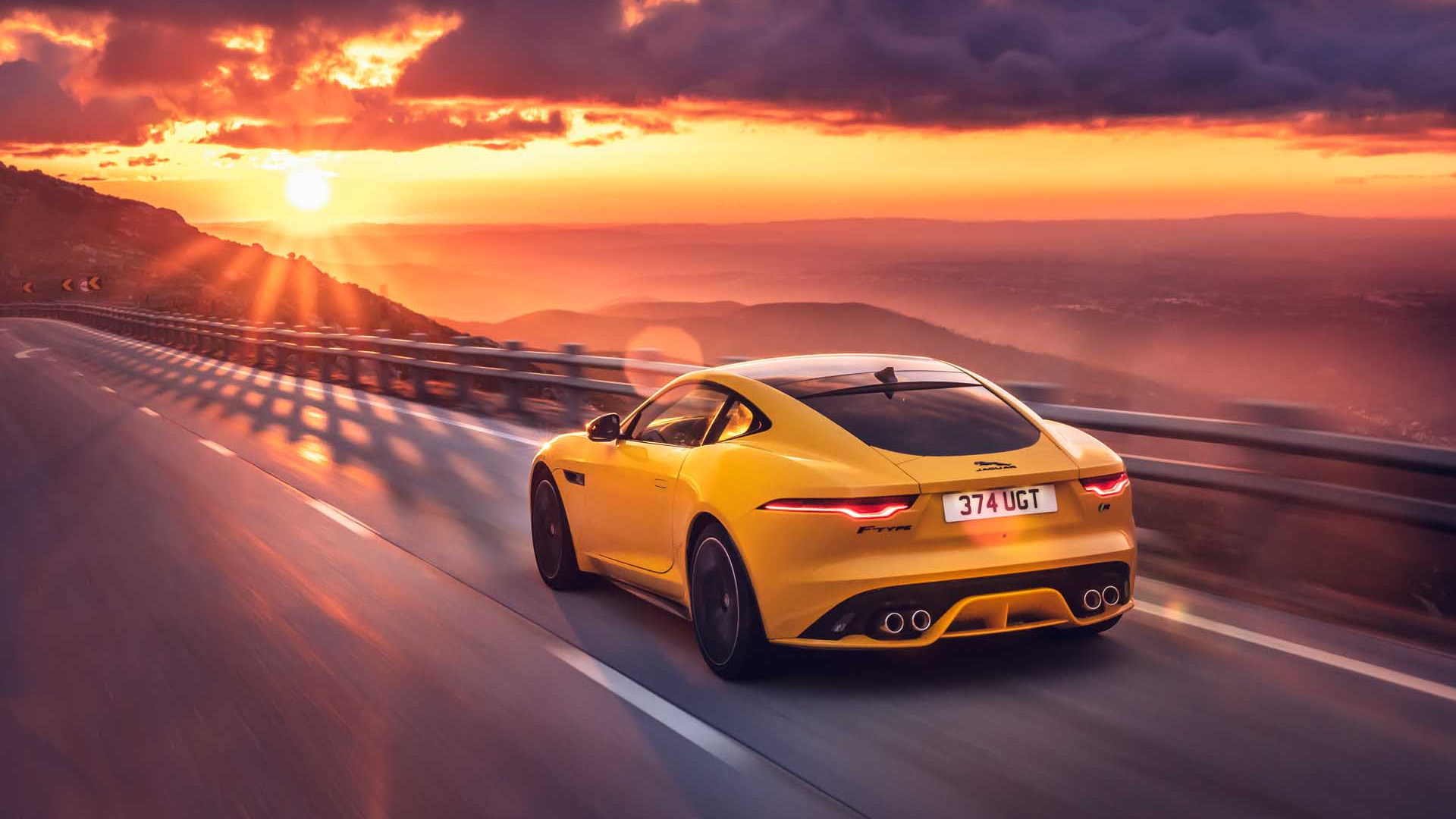 Emotions have little time for logic.

Fans of the 2021 Jaguar F-Type coupe and convertible already know that. The two-doors from Gaydon compete against genuine world-beaters: Corvette, 911, and Mustang, just to name a few. The larger circle of competitors draws in AMGs and BMWs—Jag’s outgunned in about every meaningful respect on paper, already.

To find out, Jag offered me the keys to its redesigned 2021 F-Type and an open, but soggy, stretch from the north of Portugal to the south for two days that included the N222 highway—a ribbon of roadway so twisted and entertaining that it may as well have come from Stephen King.

This year, the 2021 F-Type gets pared down to its essentials, from more than a dozen build configurations last year to just six this year. Hardtop or convertible; 4-, 6-, or 8-cylinder power, and that’s it. Its 6-speed manual, which appeared last year less often than vegan chorizo, is gone and the uber-macho F-Type SVR is on a siesta for 2021. (It’s likely to return, just not this year.)

Jag insists that the streamlined lineup is addition by subtraction, and also subtraction by subtraction; the V-6 version costs $5,500 less than it did last year and the high-po V-8 is essentially tens of thousands of less this time around, too.

But the F-Type’s appeal has never been much about numbers anyway.

The biggest changes for the 2021 F-Type are also some of the most difficult to spot.

This year, Jaguar reskinned the nose and tail to look wider and lower without actually changing the two-seater’s dimensions.

The LED headlights are squintier and draw closer to the corners of the front rather than reach up along the fenders. The grille is slightly bigger than the outgoing model, but just use your ruler’s millimeter scale if you’re checking that math.

The same goes around back, where the I-Pace’s horizontal taillights have been sculpted onto the F-Type’s tuchus. The net effect is a lower, wider-looking tail with corners that pinch right above the wheel wells.

That assumes that you can overlook my F-Type R tester’s look-at-me “Sorrento Yellow” shade that commands $4,550 on top of the coupe’s initial price of more than $102,000. It delivers just about every available eyeball in Portugal’s Douro Valley, a region known for its wine, mackerel, and now, its amazing roads littered with yellow Jags.

Not ported over: The SVR’s raucous exhaust that Jag says it can’t legally sell in the U.S. anymore. Noise regulations pushed out the SVR’s V-8 mellifluous note. Thanks, federal fun crushers.

The V-8 still chatters, spits, and screams with enthusiasm every time I dig deeper into the throttle or back off, however. A scud of clouds hanging over everywhere I went around Portugal tempered my runs in the F-Type R—but it’s still the mile-chewing, sensual grand-tourer it’s always been. Like last year, there’s no way to order a V-8 without all-wheel drive, but the F-Type R’s system prefers to send more power to the rear wheels in just about every scenario—up to 100 percent, before parasitic driveline losses.

That’s good news made better by Jaguar’s decision to port over a ZF-sourced 8-speed automatic that’s fantastic in just about every application anywhere else. (See: BMW, Alfa, Aston Martin, etc.) Only in Dynamic mode with the F-Type R turned up all the way does the 8-speed hiccup, but it’s a good problem to have: it’ll hold gears for a second longer than I expected, barking a little more into the countryside than I anticipated.

The F-Type R pulls away from a stop in a hurry, Jag estimates that it can hit 60 mph in just over 3.5 seconds. Thanks to wider tires in the front and rear by 10 millimeters—265s in front and 305s at the back—the F-Type R feels more sure-footed than it ever has, although soggy roads kept me from pushing hard in the corners.

An electronic limited-slip differential at the rear promises to carve even tighter lines for the bold and brave—and I am neither in the wet.

Jag says it revised the camber stiffness and adaptive dampers to be more responsive in the F-Type, and made the lower control arms in the front and rear double wishbones out of lighter-weight aluminum for better control. The V-8 still feels like a lumbering mass up front, but it turns in relatively sharply even with 440 pounds of added weight compared to the turbo-4.

For more than $62,000 to start, the least-powerful F-Type requires the biggest leap of faith over comparably priced Corvettes and Mustangs.

To reward brave buyers, Jag offers the same tightened suspension (although no adaptive dampers), rear-wheel drive only, and a slightly quicker steering ratio in the turbo-4 for tighter cornering. A 12.3-inch digital instrument cluster is the biggest change inside on all Jaguars, a small change compared to the bank of touchscreens that Jag offers on some of its other vehicles.

In a turbo-4 convertible with the top down (rain be damned), the F-Type P300 tucked neatly into corners and powered out with gusto.

The same ZF-sourced 8-speed appears in the turbo-4, although it requires more attention to keep the busy 2.0-liter between 5,000 rpm and 6,000 rpm, where it’s far more fun.

According to Jaguar, the turbo-4 F-Type can accelerate up to 60 mph in 5.4 seconds, which is plenty quick for rainy roads even if it’s several ticks behind similarly priced competitors.

But even that applies too much logic to what’s emotional anyway.

The F-Type doesn’t exist as a rational car—it never has. Jaguar chief designer Julian Thomson draws flowing lines and sculpted shoulders when he sketches out the F-Type and says that very little of it directly applies to Jag’s electrified future anyway.

What the sports car is today is purely emotional, it’s a passion for the brand that could use something to get excited about right now.

At least that makes sense.