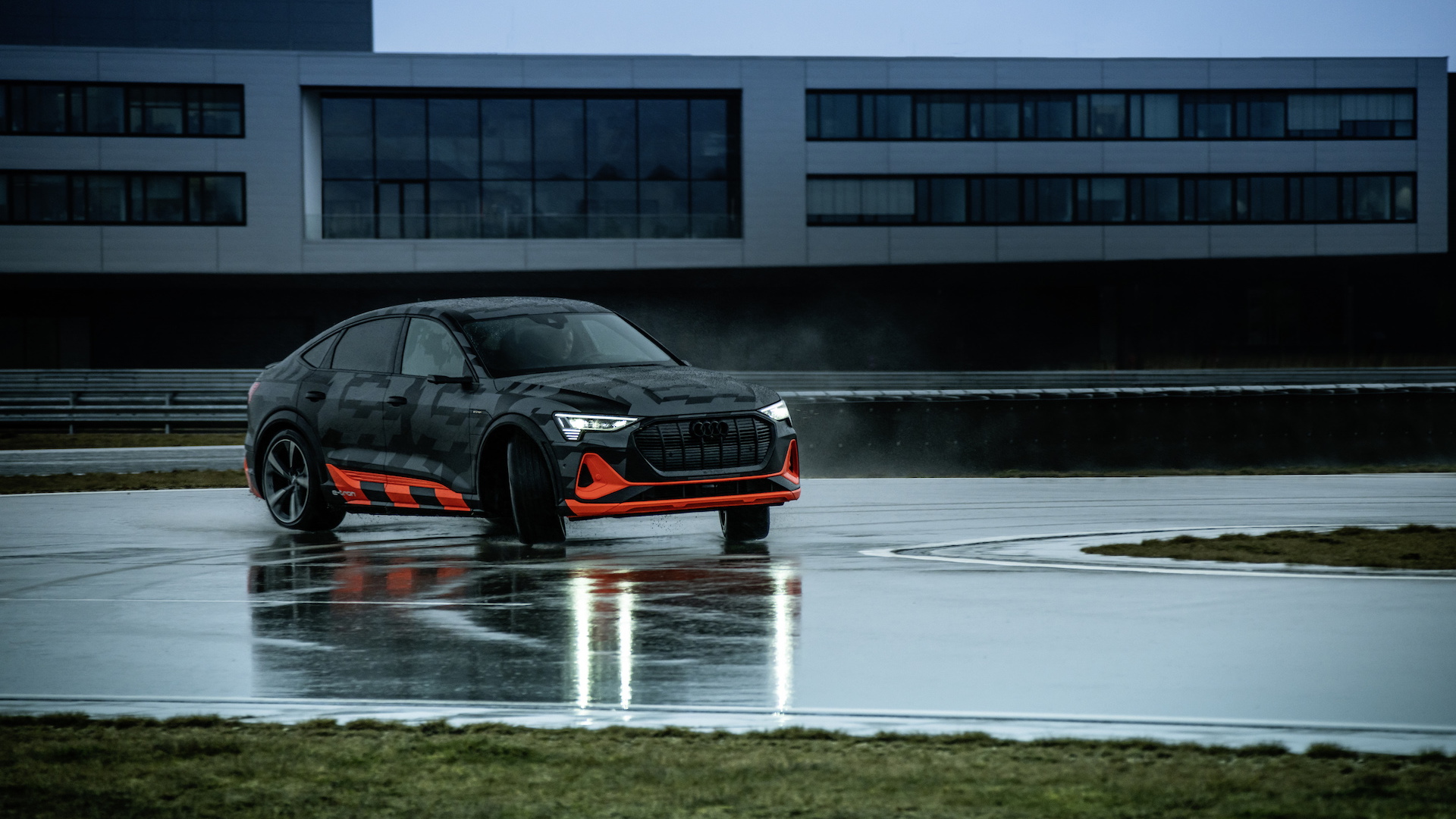 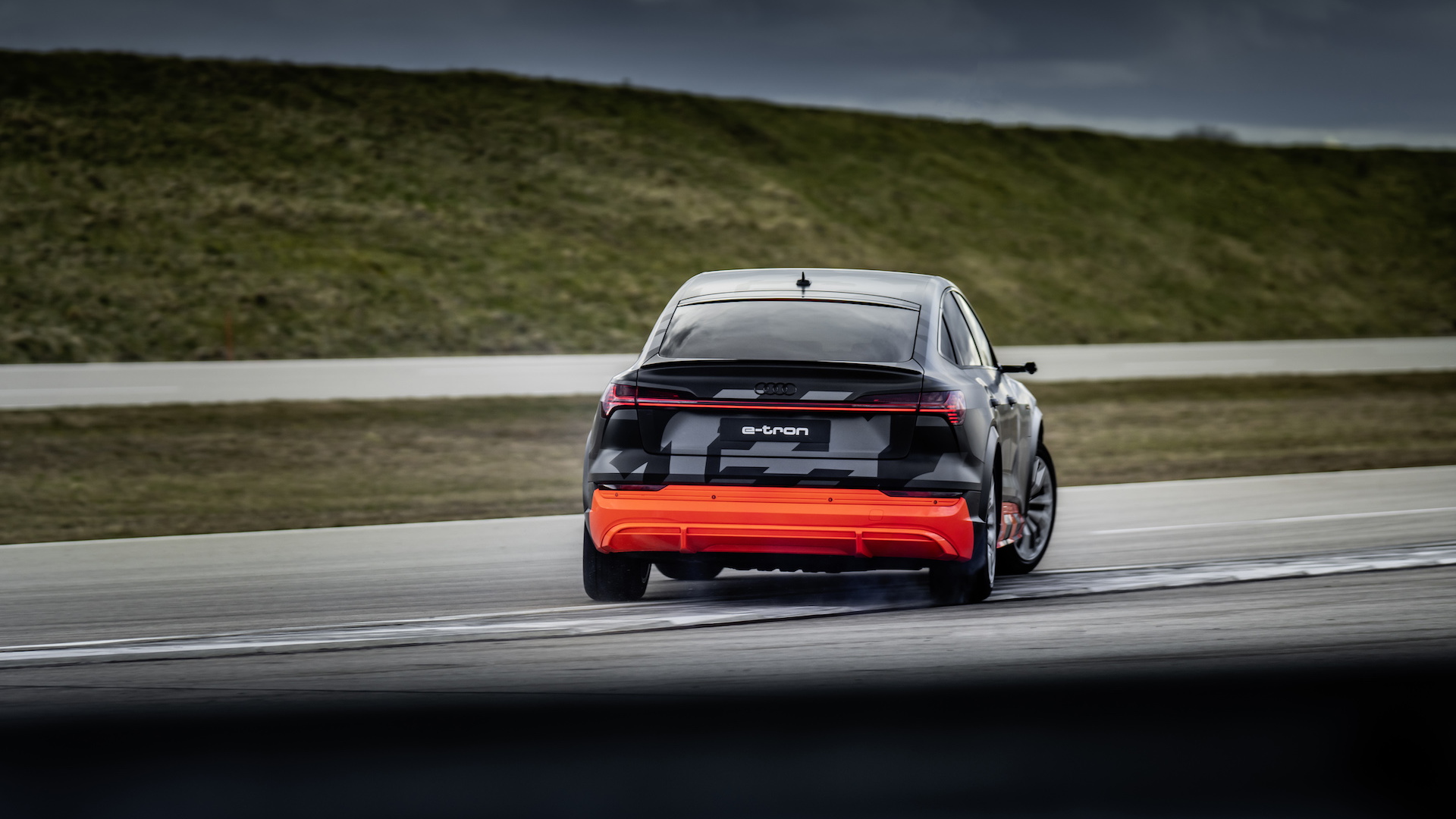 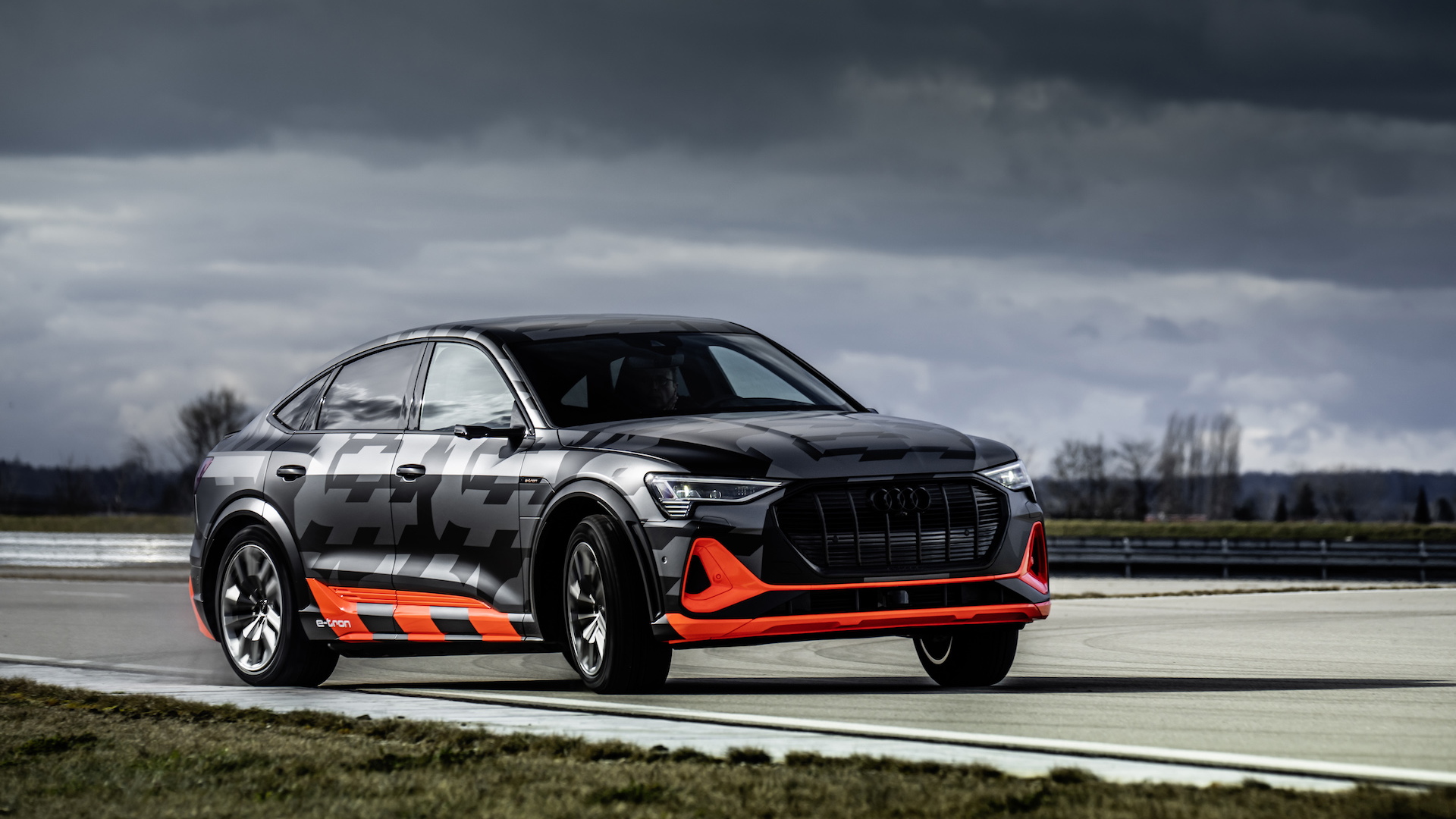 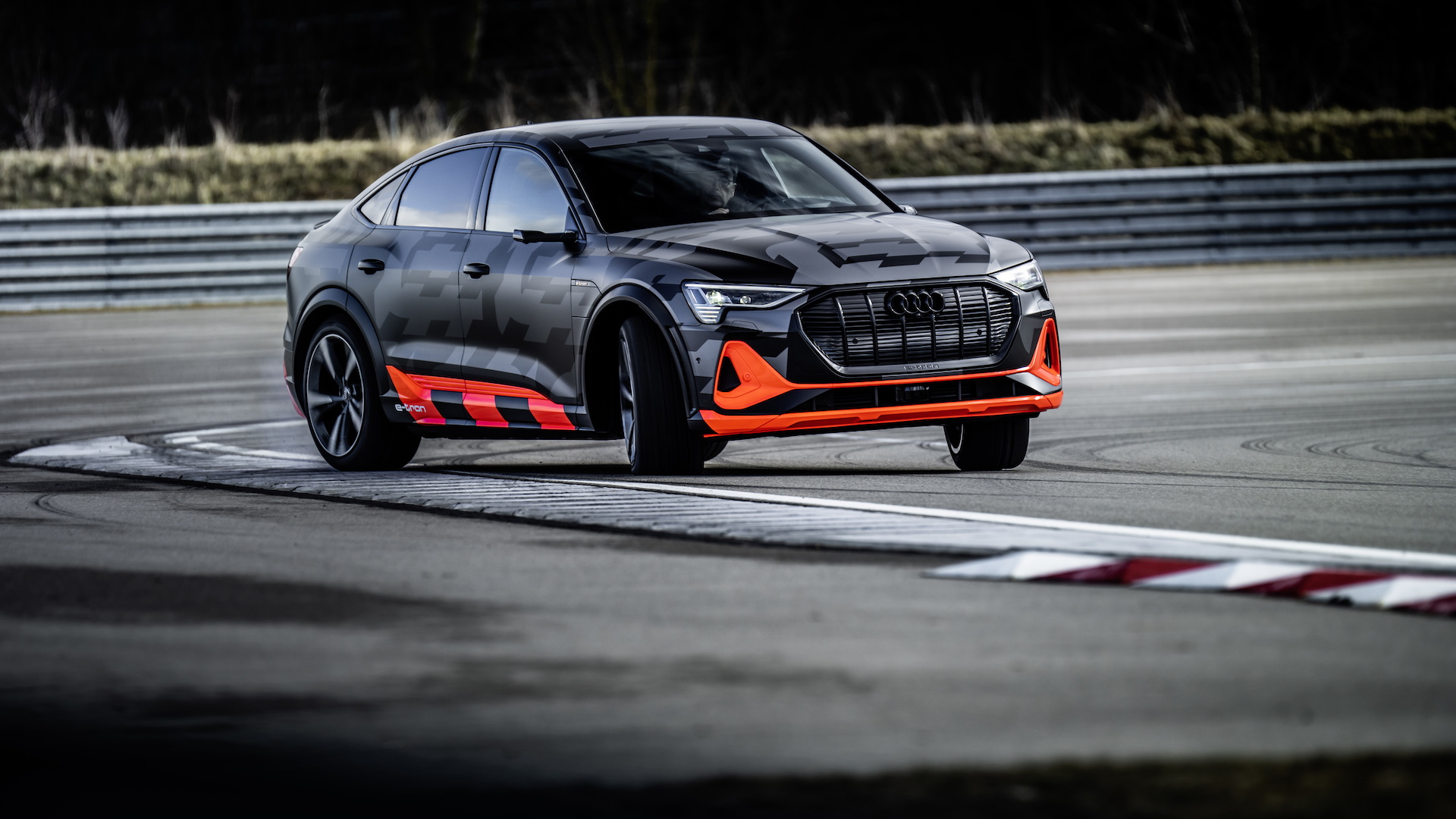 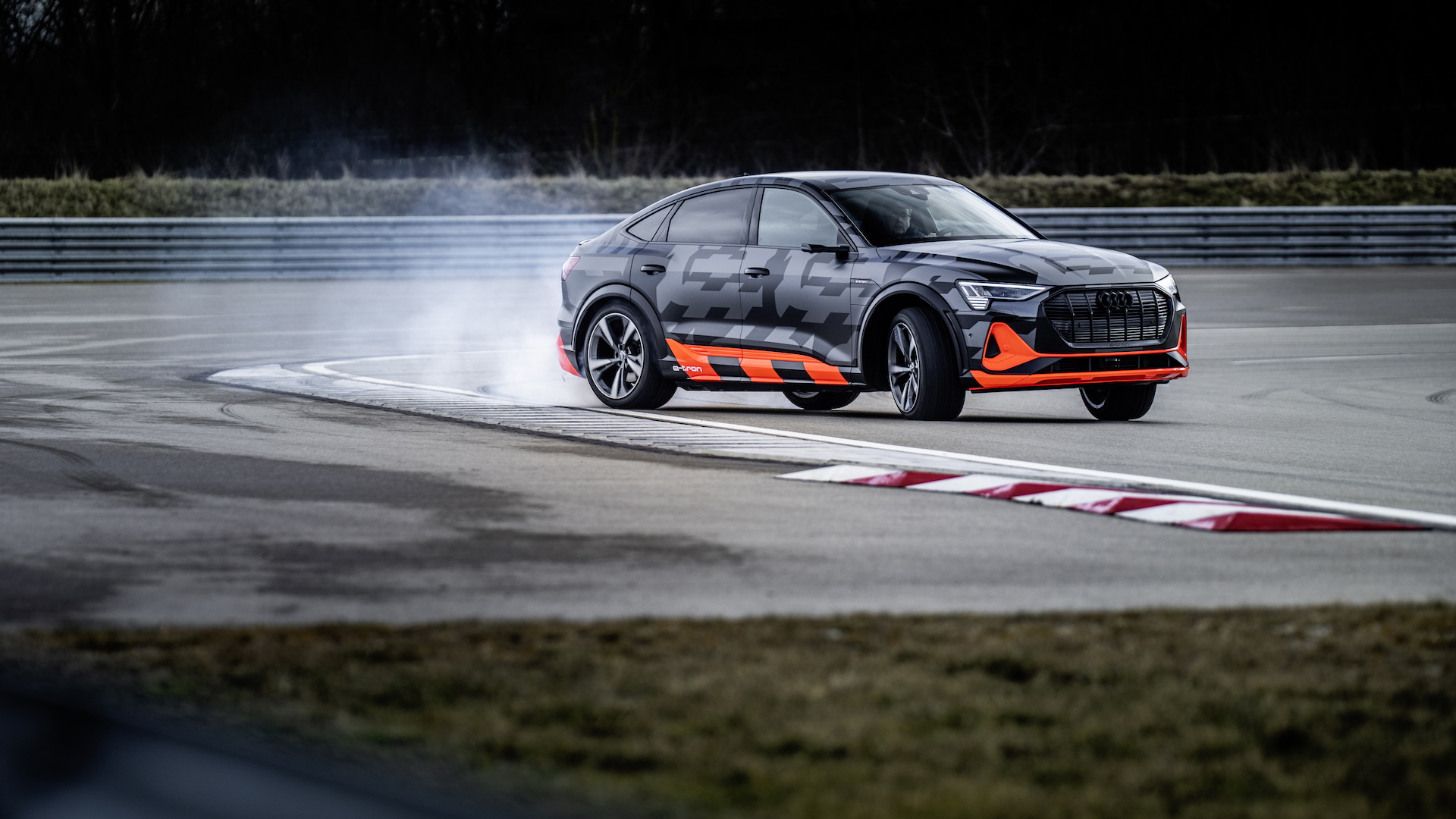 “The car doesn’t feel heavy when you’re driving,” Stig Blomqvist tells me and I do not believe him until he flings our Audi E-Tron S prototype into the first bend.

It’s not even 8:30 a.m. and we’re already sideways on a racetrack at the Audi Sport skunkworks west of Ingolstadt, Germany. The car’s tires howl but the customary whistle of a turbocharged rally car is absent. It’s so quiet inside, I can hear Stig’s hands change grip slightly on the wheel as we slide toward the track’s gray curbs, then flick toward the next one, from one electric slide to the next.

Stig is an avuncular guy who speaks quietly and doesn’t seem impressed by his own epic racing achievements. As a WRC champion, he’s probably spent a significant chunk of his life sideways. He just tosses the E-Tron S around the track like a boomerang. It always comes back, at least for him.

The E-Tron S prototype previews the next phase of Audi’s electric-car tech push. The massive effort will soon make Audi the only VW Group brand to get all four of the EV platforms. Coming soon is PPE, a future architecture for mid-size and large luxury electric vehicles. In development or on the street are MEB (which promises a compact electric Q4), J1 (the Taycan you know, the E-Tron GT you’ll know soon) and MLB Evo, which forms the foundation for the Audi E-Tron SUV, the coming E-Tron Sportback—and now, the E-Tron S.

The E-Tron S, Audi professes, will be the first mass-produced electric car to draw power from three motors. EV startups have mooted the idea, and many manufacturers have delivered two-motor cars. By being the first with three motors, Audi can enable torque-vectoring across the E-Tron’s rear axle, and can deliver it more efficiently than it can in a gas car, what with the weight and lag of a limited-slip differential or even the dual clutch packs of Audi’s sport differential.

Engineers say the new system replaces those differentials with software—and that getting rid of the mechanical connection opens up new possibilities for torque distribution. An outer rear wheel can move faster to rotate the car into a turn, for example, while a faster inner wheel can help with better stability.

The output of all three motors registers 370 kw and 973 Nm net in a full-boost mode, which is available for up to eight seconds. That converts to 496 horsepower and 718 lb-ft of torque, which translates to a 0-60 mph time of less than 4.5 seconds, by Audi’s very conservative estimates.

The E-Tron S has larger friction brakes with six-piston calipers and wider tires—it rides on 20-inch wheels, with up to 22-inchers available—but has the same steering ratio as the E-Tron.

To balance the uptick in battery consumption, Baur says the system is set up with 60-percent rear torque bias, but under highway conditions the front axle decouples for efficiency. The battery also charges and depletes to 91 percent, versus 88 percent with the standard E-Tron. The SUV body style loses a bit of range compared to the more aerodynamically friendly Sportback shape. Audi hasn’t confirmed a range for the new model yet (the E-Tron has been rated at 204 miles by the EPA).

The electric torque-vectoring system in the E-Tron S is pitched as offering not low-speed precision but high-speed performance. Still, Audi has fitted the front end with brake-based torque vectoring; it's cheaper, less complex, and lighter than a four-motor solution, which wouldn’t necessarily provide any better handling.

It's my turn to drive when Stig's tires have finally cooled. I strap into the matte-gray E-Tron S, lipsticked with hot-orange highlights, and toggle out of stability control and into Sport drive mode. Then it’s me sliding through a hairpin bend and trying to get the car to break loose. It takes a few practice runs at what’s basically 2 a.m. on my circadian clock. Once I get the hang of it etched on my brain, the controllable slides feel like they could be micromanaged—in the best possible way, with a little countersteer and power.

On the nearby handling course, I switch between Comfort mode with its more pronounced body lean, and the flatter, snappier Dynamic mode. Even though I feather the throttle, it's enough to shotgun my passenger's water bottle into the footwell. I bank into the first corners and though the E-Tron S is heavy metal, it doesn’t understeer by default. It likes to let its tail go loose, and I slide corner to corner with a correction here and there before I shimmy through a set of switchback cones.

It's a short drive, but one that drives home a point. More motors means more personalities on tap at the flick of a switch—or at the revamp of an algorithm. Audi could dial in a predictable, casual, relaxed car—and then tweak its software to turn it into an ultimate power-slide machine.

Audi says it will be the first to sell a three-motor electric vehicle in mass quantities, but hasn’t revealed exactly when it will come to the U.S. It’s fair to suggest this time next year, E-Tron customers will be able to tick another box for the more precise handling that comes with the additional motor. More details will surface at March's Geneva motor show.

Electrification has already brought huge directional change to Audi, and more waits in the wings. Audi says in the U.S., some 30% of its lineup will be electrified by 2025, which means 30 electrified models, about 20 of which will be battery-electric cars. Variations like the three-motor E-Tron S count toward those tallies.

“It would have been nice in the ‘80s if we had something so quick-reacting,” Stig had told me before he finished shock-and-awe-ing me out of my jet lag. Now he peels out of the parking lot to take another victim for one of his breakfast-churning runs. Other than the low whistles of the observers who remain behind, all we can hear is the near-silent hum of electric-car soundtrack. Until Stig begins to slide, that is.

Audi provided travel and lodging so Internet Brands Automotive could bring you this firsthand report.