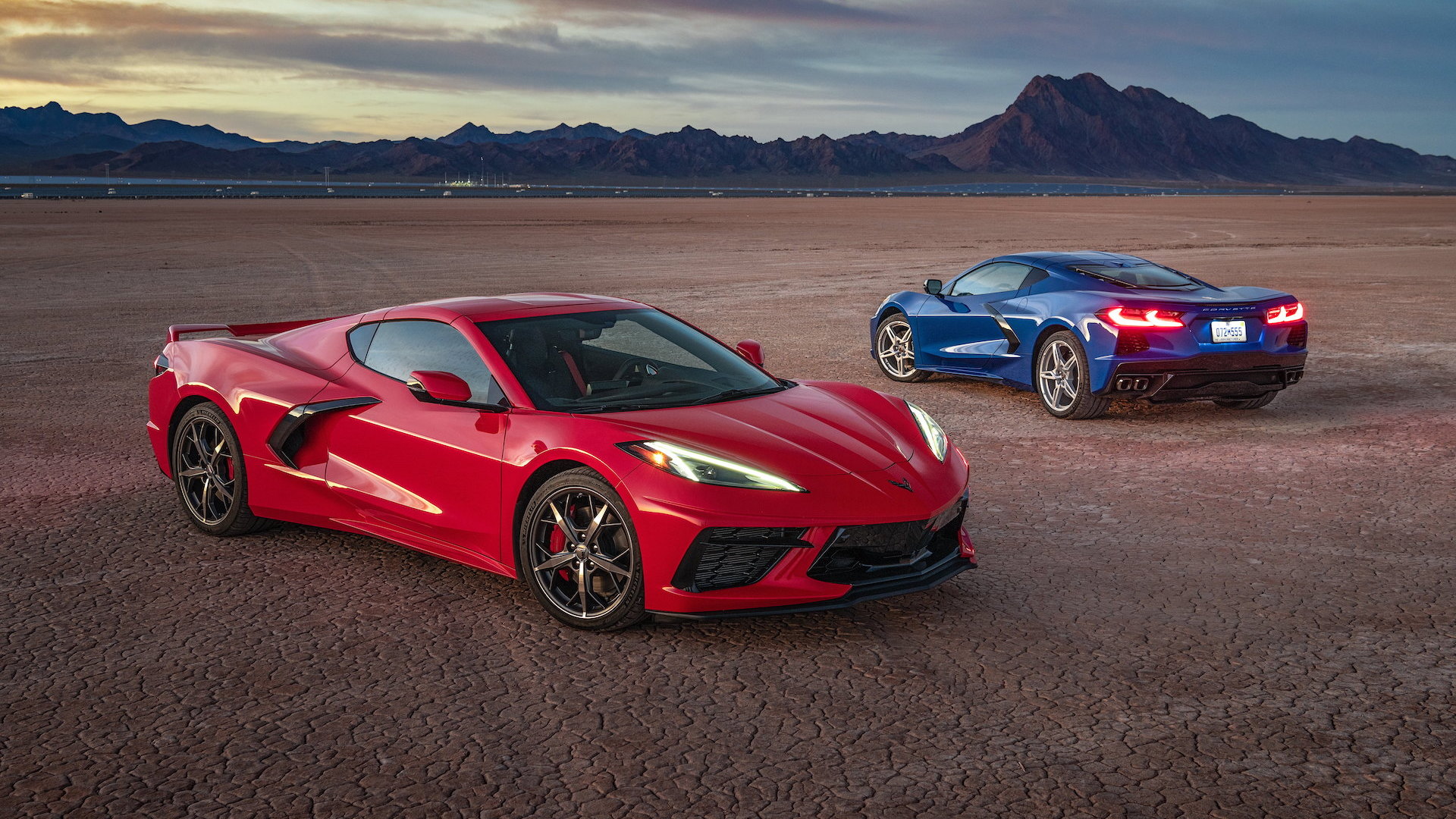 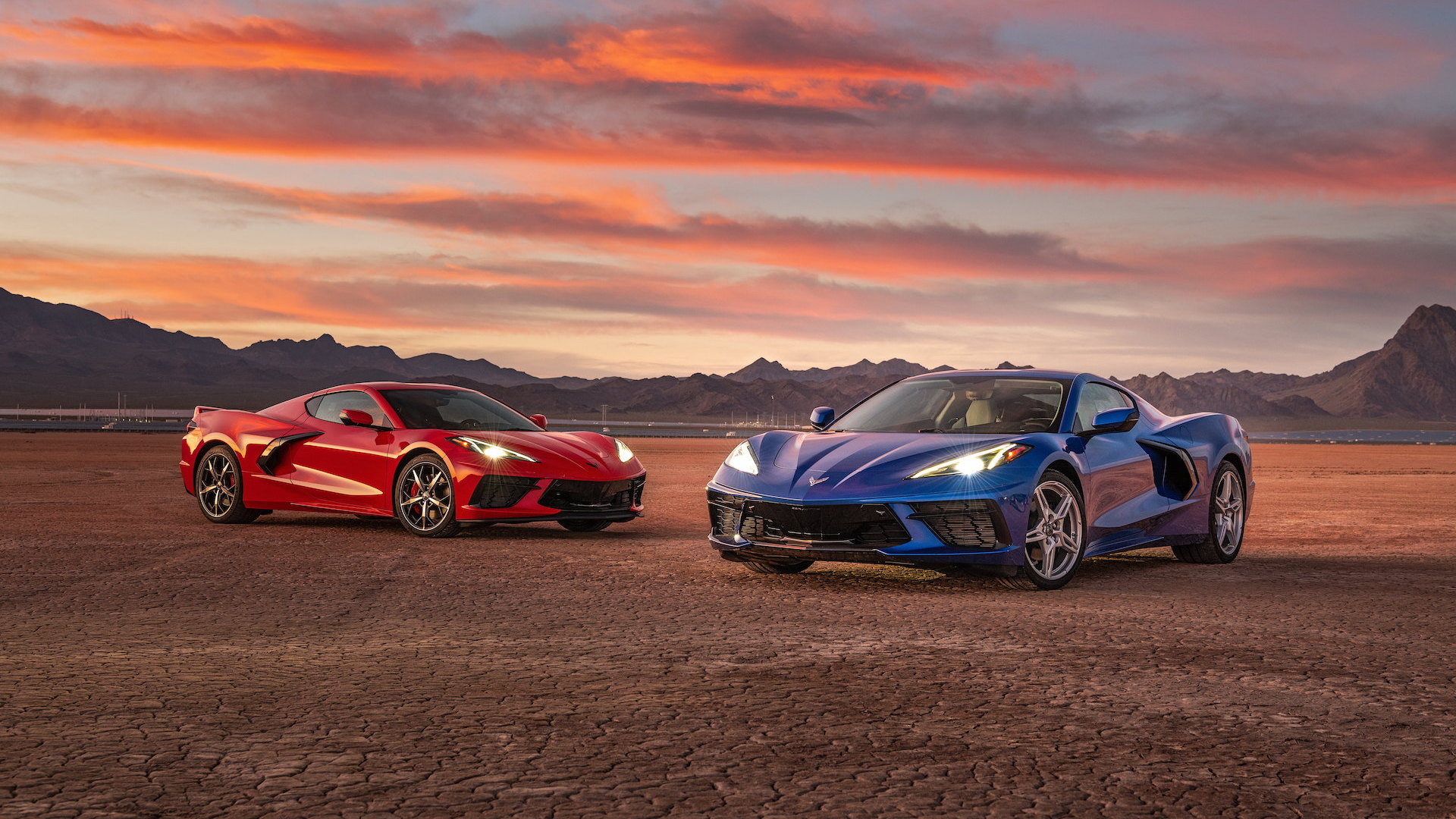 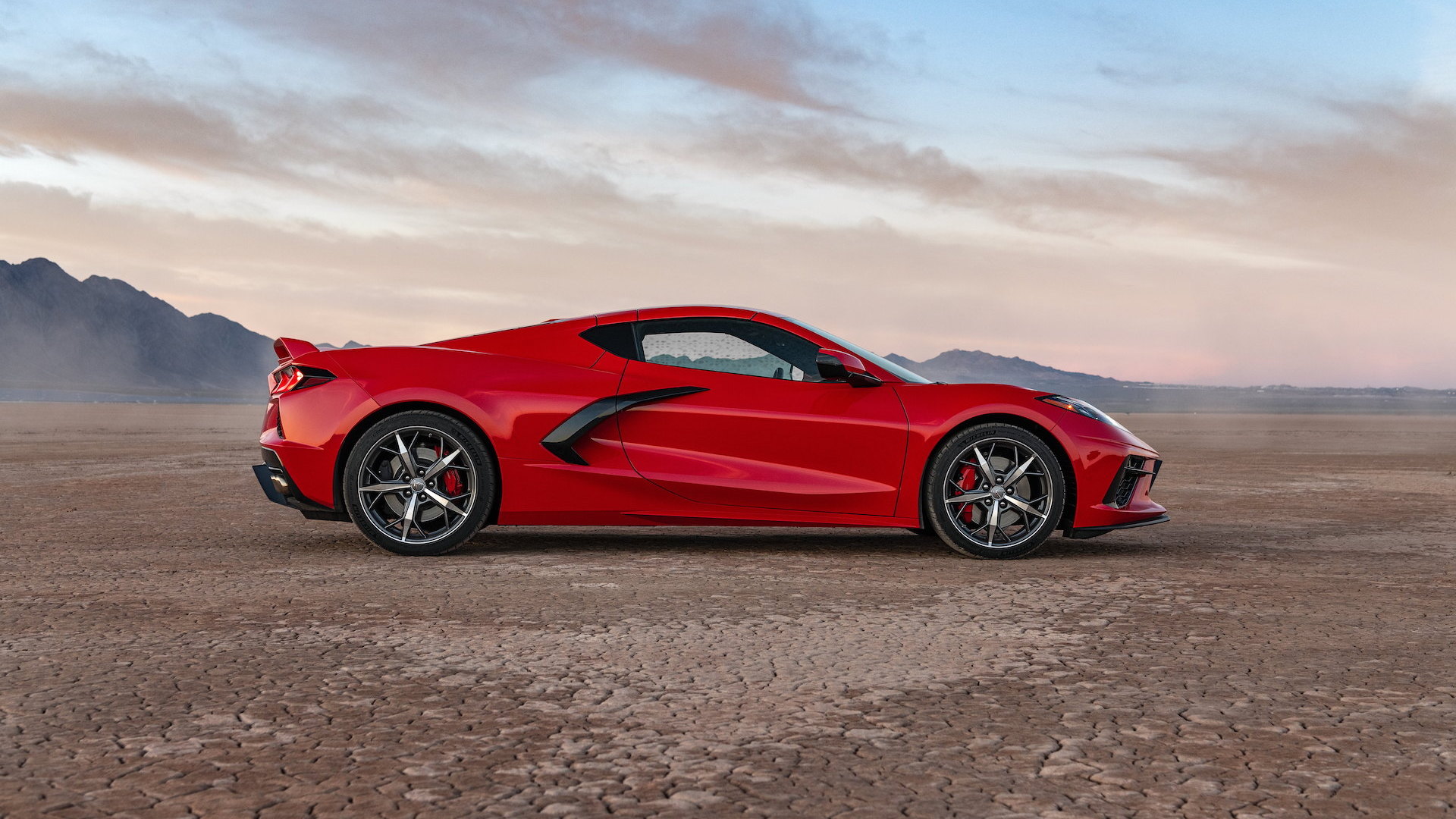 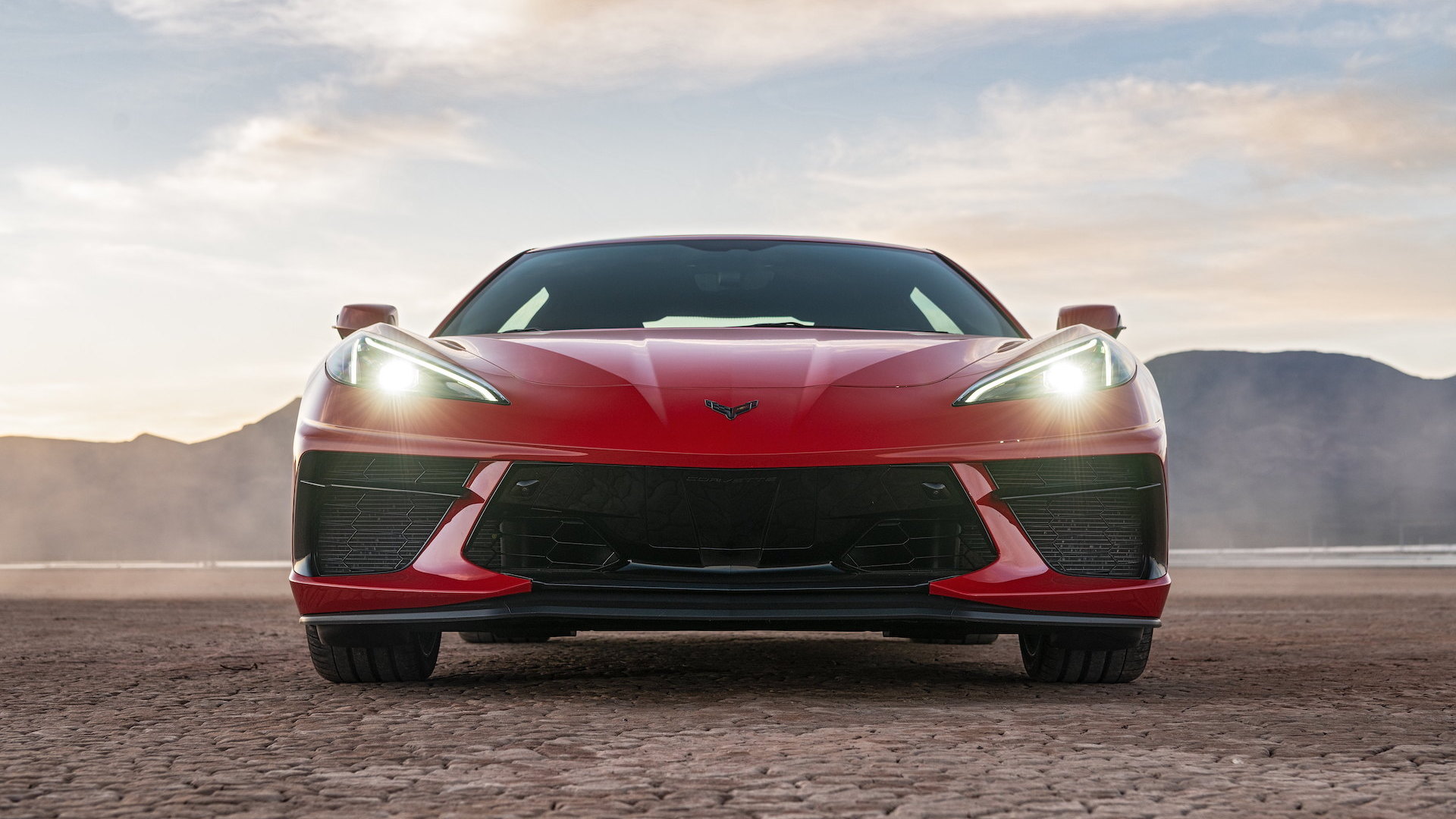 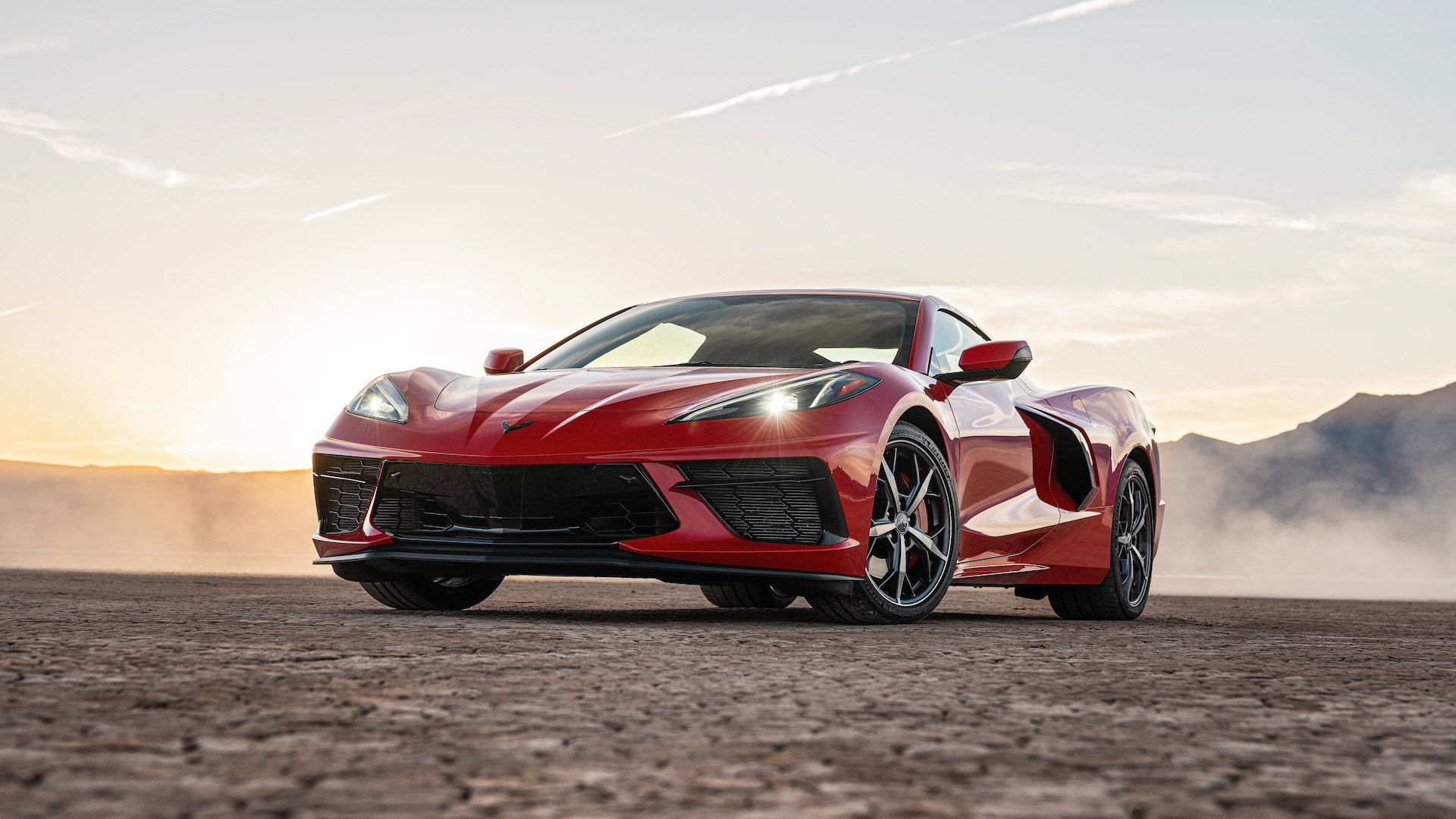 I feel cocooned buckled into the 2020 Chevrolet Corvette. There are driver-focused cockpits, and then there is this one. The center screen is more steeply angled toward me than in any other car, the center console closes me in with its excessive width and rising row of climate controls, and the Competition Sport seats hug my hips.

My seat sits 16 inches closer to the front axle compared to the last-generation Corvette, and without an engine up front in this Corvette, its hood falls away quickly and gives me a great view of the road ahead.

My view reveals the racetrack at Nevada’s Spring Mountain Motor Resort & Country Club, and I’m staring squarely at the blunt rear end and tall spoiler of a 2019 Corvette ZR1 with a pro driver at the wheel for a lead-follow track session.

The eight-generation Corvette, codenamed C8, represents a paradigm shift from every Corvette that came before. The goal for the C8 was to create a car that could perform better than the front-engine C7 Corvette. To get there, Chevy moved from a seemingly ideal 50/50, front/rear weight balance to an unbalanced but more effective 40/60 ratio.

Did Chevy get it right? The ZR1 leaves the pits. I grip the squared-off steering wheel (Chevy engineers call it a “squircle”) for dear life and chase after the ZR1.

We’re running a combination of Spring Mountain’s North and South tracks. Together they make up a quick, but technical, 2.4-mile circuit with fast corners, undulating esses, and sharp bends.

It takes only one corner to notice the differences from the C7. The new seating position not only provides a better view of the track but also it’s easier to carve a precise corner. Sitting closer to the front axle makes each turn happen quicker for me rather than the slight lag that accompanies sitting behind the car’s center of gravity. It’s more engaging and easier to approach, especially versus a car like the ZR1 that has such a tall hoodscoop to block the view ahead.

General Motors is at the forefront of tuning electric-assist power steering systems and this one fits the bill. The steering ratio in the 2020 Corvette isn’t overly quick at 15.7:1, but it’s direct and predictable. While it may have a smidge less feel than the C7’s steering, perhaps because there is less weight over the front end, it does exactly what my hands tell it to.

Vehicle Performance Manager for Chevrolet Performance Vehicles, Alex MacDonald, tells me the C8’s new mid-engine design, which shifts 10% of its weight rearward, has two advantages over a 50/50 weight balance car like the outgoing Corvette.

“On corner entry, the mid-engine car has an advantage because you can even out the weight on the axles during braking and the amount of work they have to do,” he says.

My drive backs up his claim. The fastest area of the track is the end of the front stretch where I see speeds up to 122 mph. When I jump hard on the Z51-spec brakes (13.3-inch front and 13.8-inch rear rotors, both with four-piston Brembo calipers), the C8 stays arrow straight, without any wobble or fade. Though I never experienced instability with the C7, the C8’s weight ratio allows the rear brakes to do more of the work, which will likely result in longer brake life as well.

The C8 turns crisply into corners and, when pushed, its tail steps out. The slides are easy to catch and, in the hands of an accomplished driver using judicious throttle, the rear wheels can point the Corvette into turns as much as the fronts. A hot lap with MacDonald at the wheel late in the day makes that clear. He rails on the car like a pro driver who has lived with it for years, which he has. For my part, I feel the rear end walk out a couple of times on the track and on an autocross and I can easily bring it back in line with a dab of countersteer.

MacDonald admits a 50/50 car like the C7 has one advantage over a mid-engine car during cornering. “As you turn in mid-corner, there’s a phase where you’ve got very little throttle, very little brake, and you’re just balancing the car,” MacDonald notes. “That’s where you might prefer a 50/50 weight distribution car to give you a little more ability to turn in mid-corner.”

Still, the C8 handles the longer, faster turns on this track well. The turn after the long straight is a prolonged, high-speed right-hander. The instructor tells me to feather the brakes to guide the car to the apex at speeds around 70 mph. Rather than understeer like I expect, the brakes help the car tuck in dutifully and get the momentum under control. The front-engine car’s advantage appears to be nullified.

When I get back on the throttle at the apex of any given turn to head into the next straight, the mid-engine design reveals its greatest advantage. With more weight over the rear axle, wider tires, and the Z51’s electronic limited-slip differential, the Corvette sends its 495 horsepower to the asphalt efficiently and with surprising stability. That allows the C8 to accelerate from corner apexes faster than it ever has. Earlier power delivery could mean a 2-3 mph increase in speed at corner exit and that might increase to 5-7 mph at the end of the next straight. Even when I lose patience and begin feeding in throttle before an apex, the Corvette lines up and shoots down the straight with confidence.

Though stable, the C8 isn’t as rock-steady as a Porsche 911. When thrown into a corner, the C8 can oversteer, but that’s easily controlled, making the car approachable for performance drivers. During an earlier drive, vehicle dynamics engineer Mike Hurley told me Chevy aimed for neutral responses with a bit of understeer. MacDonald’s tail-out exploits show any understeer can be countered with gobs of throttle and incredible skill.

The C8’s ability to use its power efficiently also makes it much faster in a straight line.

During a drive on the streets outside of Las Vegas, I bring a Torch Red C8 with the $5,000 Z51 Performance Package to a stop on an open desert highway. With no cars in sight and the clear blue sky and rust-colored landscape of the American Southwest as witness, I turn the dial on the center console to Track mode, double-click the traction control button to engage the Performance Traction Management system, then set it to Sport 1. Any PTM mode will do.

I jab the brake to tell the car I want launch control, keep my left foot on the brake, then pin the throttle. The 495-hp LT2 6.2-liter V-8 revs to 3,500 rpm and stays there. I let go of the brake and the 305-mm wide Michelin Pilot Sport 4S rear tires slip maybe a quarter turn, probably only a couple of inches, and the mid-engine Corvette takes off with an efficiency no factory Corvette has ever known. It builds speed with tremendous force, and its dual-clutch transmission snaps off gears quickly and cleanly without a pause in power between cogs. While I’ll dearly miss shifting my own gears (let’s pour out a little for the dear-departed manual), this DCT is so smooth it joins Porsche’s PDK 8-speed among the best dual-clutch gearboxes on the market.

The reason the mid-engine Corvette puts its power to the pavement so efficiently is called normal force. It’s the perpendicular force exerted between the car and the road, basically the weight on the road over the rear tires. With 10% percent of the Corvette’s weight shifted rearward, it exerts more normal force on the road at its drive axle and accelerates quicker.

The improved traction created by the mid-engine layout not only shortens the 0-60 mph time, but also makes it easier to repeat. I didn’t do anything special to get such great traction and acceleration. The 2020 Corvette, which starts at $60,000, achieves about the same 0-60 mph time as the $122,000 2019 755-hp Corvette ZR1. The difference is the additional normal force on the rear axle that allows the new ’Vette to put its power down, while the ZR1 often loses time in a gout of tire smoke.

The street drive reveals that the 2020 Corvette is much more refined than the car it replaces.

“The car needs to do multiple things, go around a track well but also take you on a weekend trip in a civilized way,” Hurley said in October. “It’s easy to make a car that has one purpose, whether it’s a track or road car. The hard part is to make a car that does both really well and everything in between.”

The refinement starts with the engine note; the V-8’s rumble isn’t as pronounced as the C7’s while cruising, and that makes conversation easier. However, the LT2 V-8 still barks when provoked and rumbles more noticeably in Track mode. The American V-8 still sings its uniquely American tune, just not at death-metal volume anymore.

Track is also the only mode that turns the ride jittery. Despite the stiffer suspension tuning of the Z51 package and because of the range of tuning for the magnetic dampers, the ’Vette absorbs bumps well in Tour and Sport modes. However, the car jiggles on bumpy pavement in Track mode, so that mode is best used for its namesake.

Inside, materials quality and fit and finish take a leap forward in the new Corvette. My tester car is decked out with the 3LT package that adds niceties such as a 14-speaker Bose audio system, front and rear vision cameras, a head-up display, heated and cooled GT2 bucket seats, a heated steering wheel, wireless phone charging, and Chevy’s Performance Data Recorder that takes video and reports track times. The $11,950 package also includes extended leather on the instrument panel, dash, and doors, as well as synthetic suede trim. I can’t even find hard surfaces down low on the doors and dash where even luxury brands tend to skimp.

The quality of the new Corvette’s cabin rivals any other sports car’s interior, though its ergonomics can be questioned. My 5-foot-9 frame fits well, but a taller driver complains about his knees extending toward the steering wheel and his elbows hitting the seat bolsters and center console while turning the wheel. The top-of-the-line Competition Sport seats would benefit from wider bottoms and more bolstering on the seatbacks to keep drivers snugly in place in 1-plus G turns. The enclosed feeling from the driver’s seat may also make some drivers feel claustrophobic, and the long line of climate control buttons along the outer edge of the center console is hard to interpret and unattractive. The view through the window that covers the engine is also restricted, though GM’s available rear camera mirror offers an expansive view of what’s behind.

Messing with an automotive icon is a recipe for trouble. Diehard fans like it just the way it is, thank you very much, and they don’t need anyone ruining their beloved machine. Get it right, though, and even longtime fans will wonder why those once controversial changes weren’t made a long time ago.

Chevrolet has messed with the Corvette for 2020, introducing a paradigm shift from a front- to a mid-engine architecture. The powers that be at the brand need not worry about losing their rabid base, though. The new Corvette is faster in a straight line and around a track, easier to see out of, more comfortable, and more refined. Chevy got the C8 Corvette right.

Chevy provided travel and lodging to Internet Brands Automotive to bring you this firsthand report.