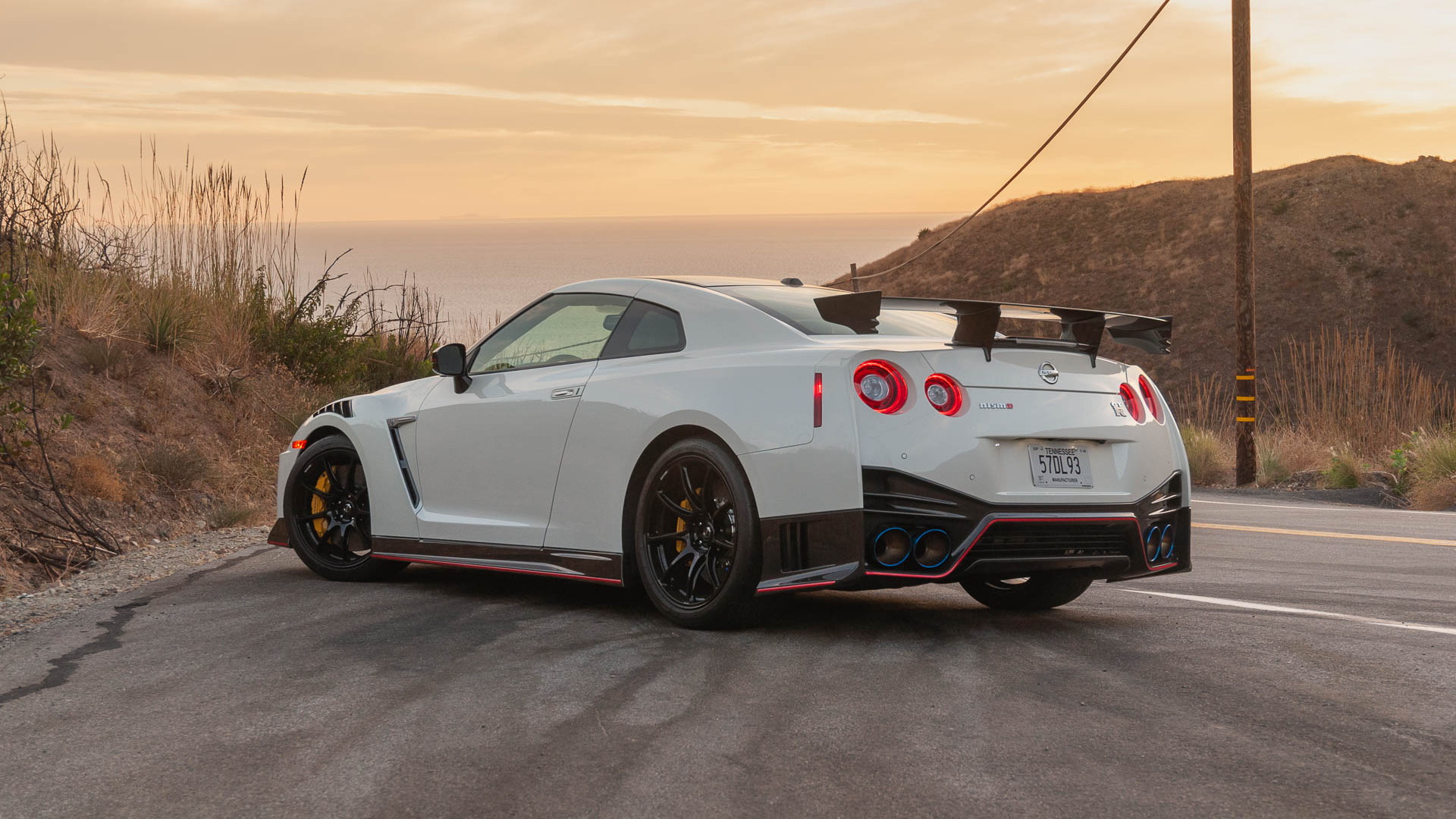 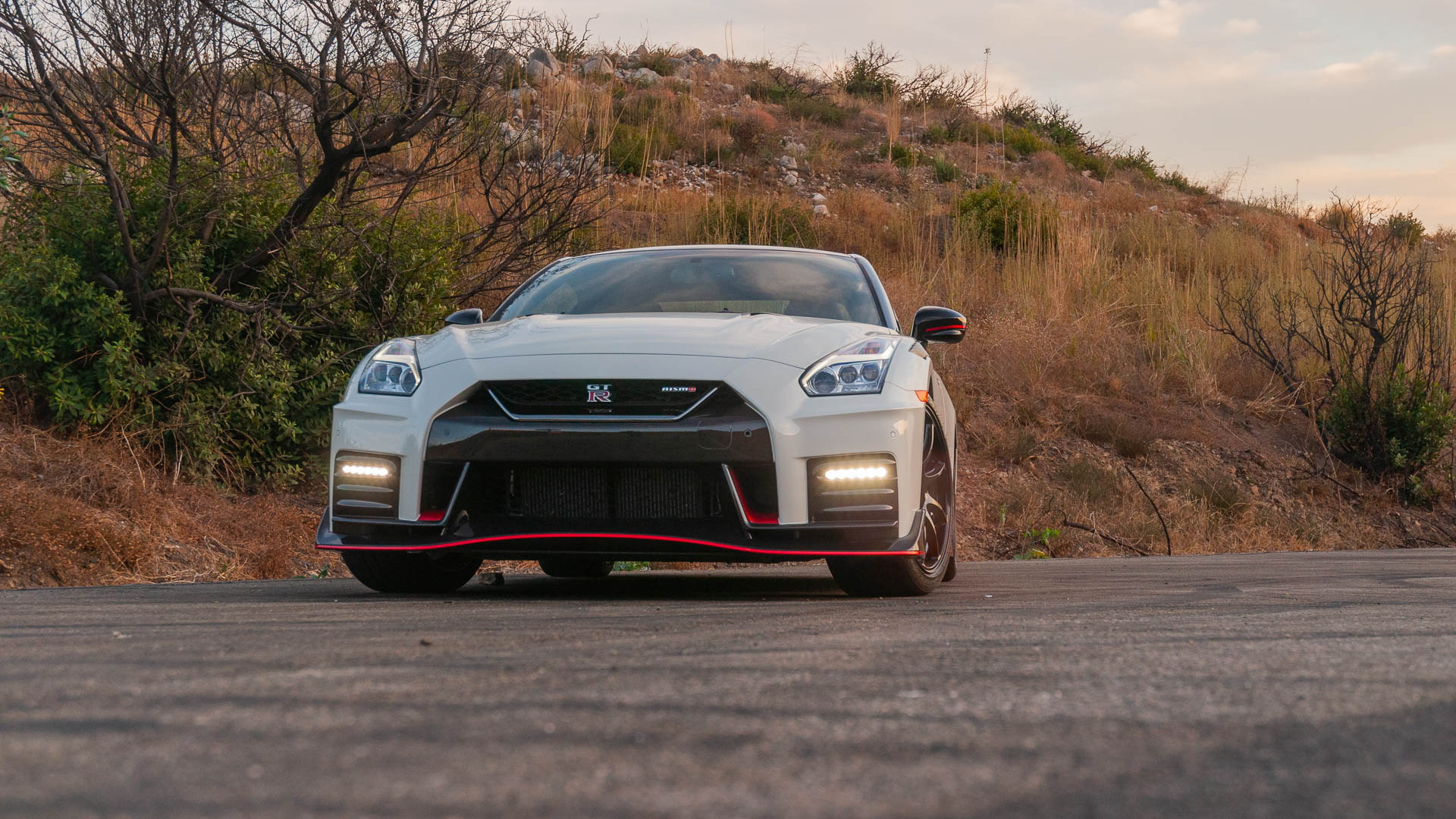 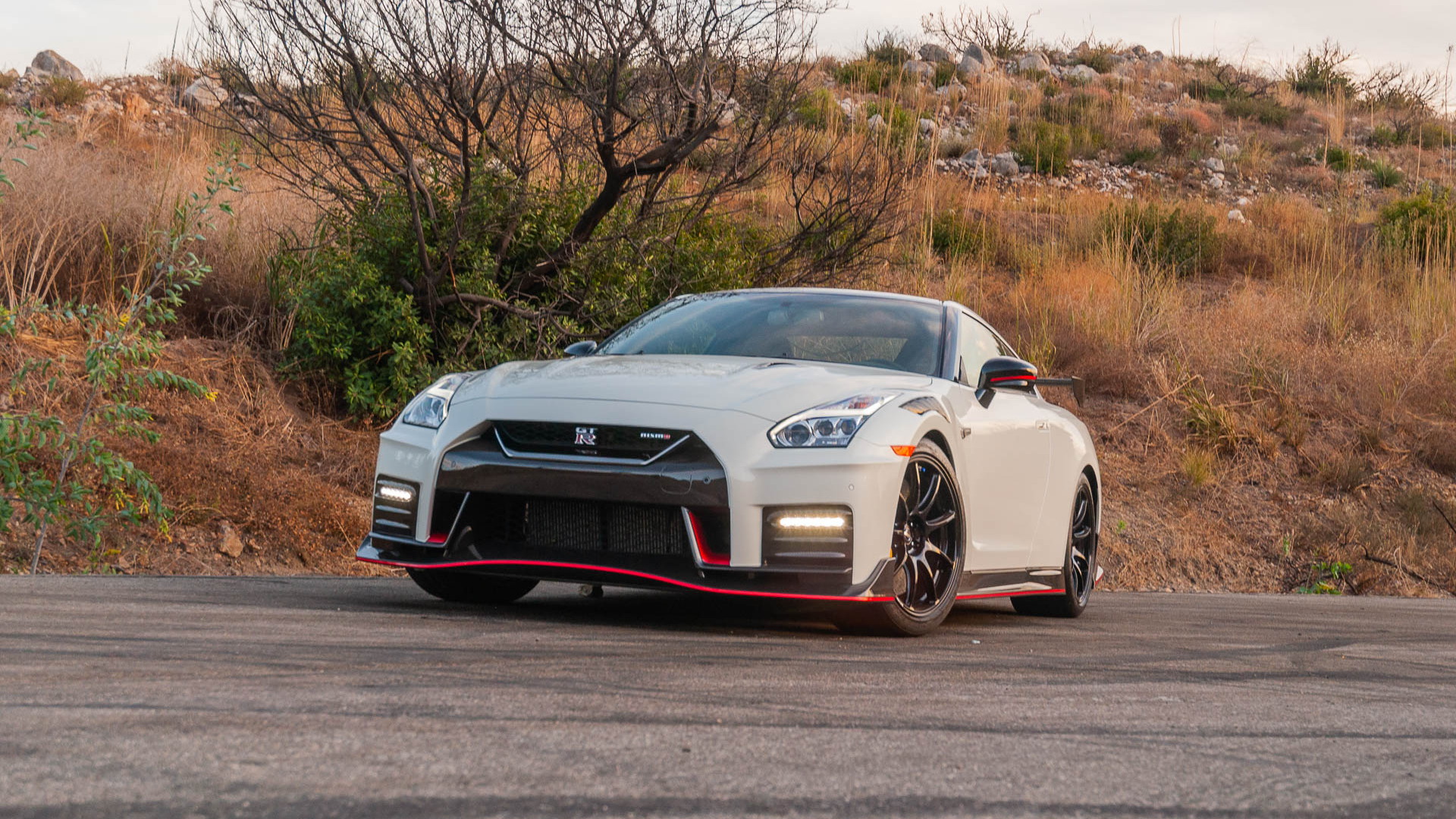 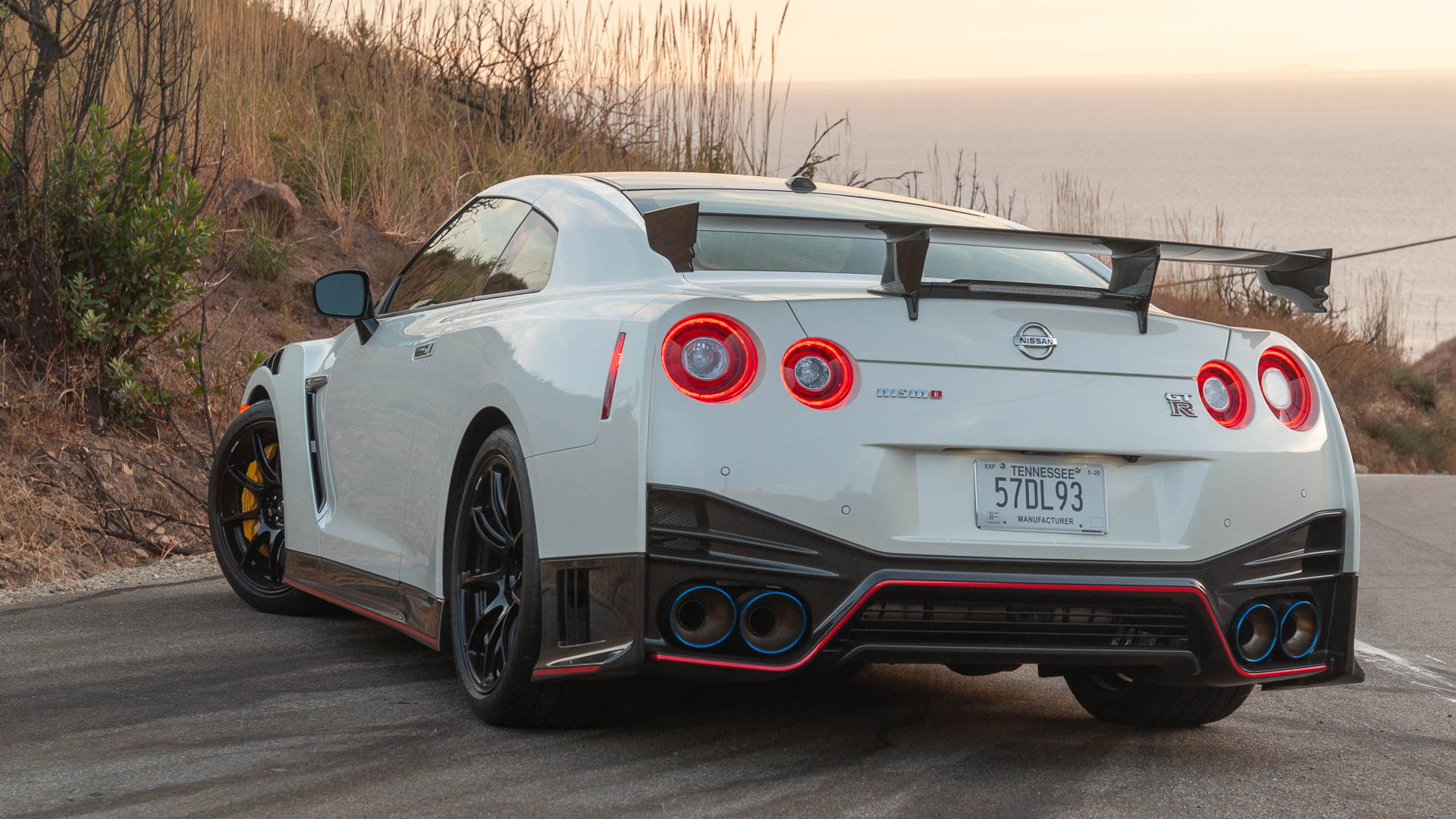 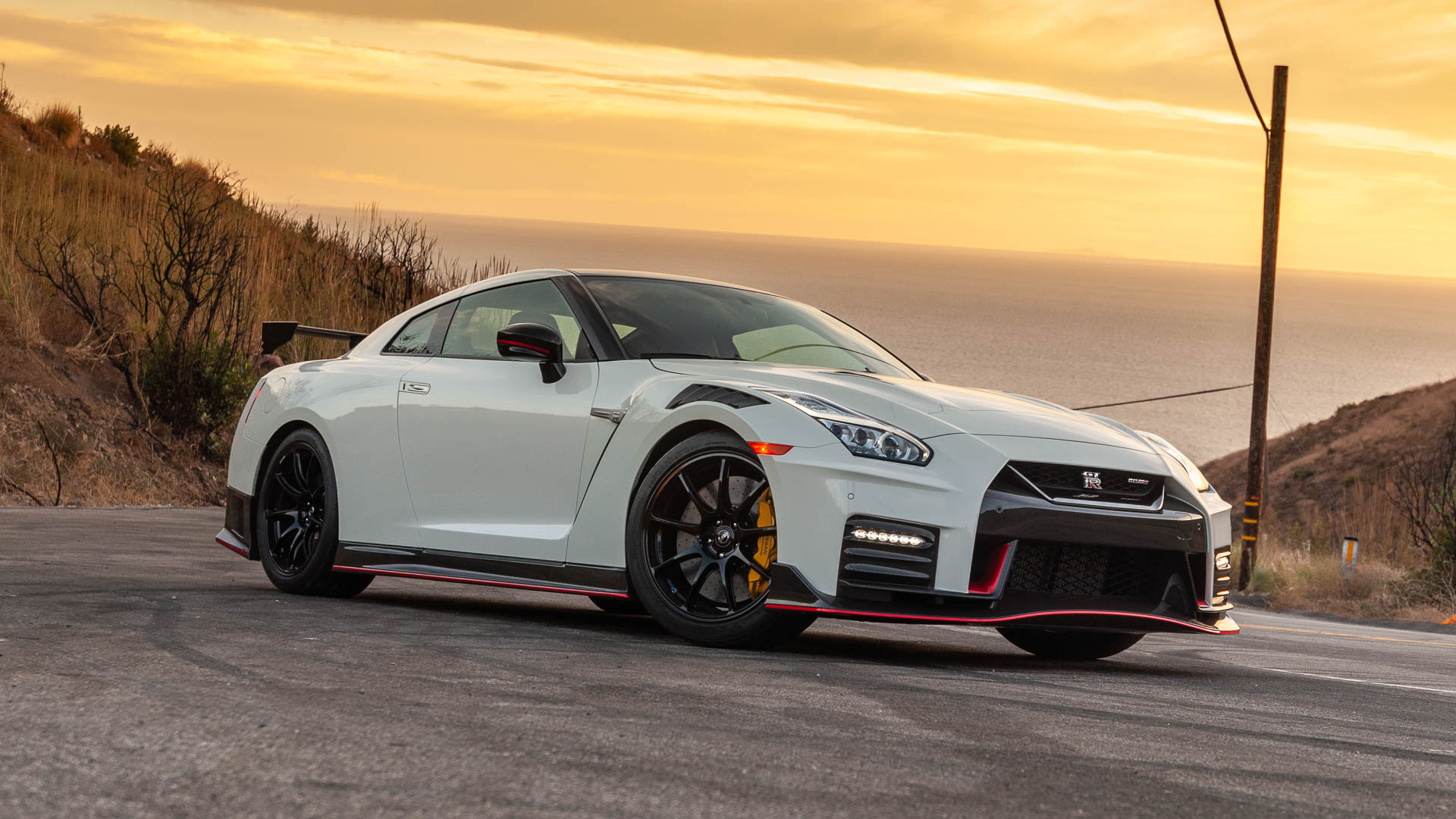 After more than a decade on the market, most cars are replaced by a newer, faster, more powerful model. Not Godzilla.

For the new decade, the 2020 Nissan GT-R Nismo became lighter and slipperier, with more stopping power and more grip, all in the name of stability, ridiculousness, and exclusivity.

It took over 10 years, but the Nissan GT-R Nismo has just hit its prime.

As the pearl white GT-R Nismo snaked its way toward the bottom of the Angeles Crest Highway in Los Angeles, I flipped the toggles for the all-wheel-drive system, electronic dampers, and traction control to Race mode. Wake up, Godzilla.

I pushed the throttle toward the floor and the power surged. This wasn’t a fancy new powertrain, and there are only six cylinders under the carbon fiber hood. The boost takes time to build despite the 2020 turbochargers’ new 10-vane turbines from the GT3 race car. It’s just like turbocharged engines of the ‘90s, except with way more electronics this time around. Spoiler: Nissan said the new turbines are 24% more responsive than last year, but there’s still notable turbo lag for 2020.

The orange needle crested 3,000 rpm, and the VR38DETT 3.8-liter V-6 growled through the now-standard titanium exhaust system as it works. Waiting in the wings, the turbines began to spool up to 29 pounds of boost.

The turbos kicked as the tach’s needle passed 3,800 rpm and the small of my back was suddenly shoved against the red and black Recaro seat back. By 4,000 rpm, the Japanese rocket was lit and blasted forward like a rocket with thrusters wide open.

After a few seconds, the aged 6-speed dual-clutch transmission with a new algorithm for the 2020 transmission kept the engine spinning and ready thanks to a lower gear. The transmission had an easier time keeping the engine both on the boil and on boost whether braking hard, entering a sharp left-hand turn or while powering out of a corner. The GT-R’s dual-clutch transmission still shifts slower than Porsche’s excellent PDK, but no mortal could shift quicker with a manual transmission. I grabbed for the large paddle shifters mounted to the steering column only to find they’ve been ditched in favor of smaller, cheaper-feeling plastic flappers mounted to the back of the steering wheel. Bad call, Nissan.

The Dunlop SP Sport Maxx GT600 tires carved each corner and gave me real-time updates at the wheels. The GT-R’s hydraulic steering setup is old by modern standards, but it still shames most electric-assist power steering units.

The Dunlops have an updated compound and the front tires have one less grove for 2020 resulting in an 11% larger contact patch. Once warm, the result is four tires that stick to the pavement like Velcro. Cold? The four pieces of rubber are hard and unpredictable.

As I jammed on the brakes and headed into a sharp right-hander, the new for 2020 pizza-sized carbon-ceramic brake discs threw me forward into the seat belt as the tires clawed at the pavement. A brake upgrade wasn’t necessary, but who’s going to complain about lighter, stronger brakes that remove unsprung mass in a car capable of nearly 200 mph? Nobody. That is until it’s time to pony up for replacements.

The 16.1-inch front rotors and 15.3-inch rear rotors shed 36 pounds of unwanted mass. This unsprung weight loss is even more desirable because it improved ride quality, as well as agility, and was the most noticeable difference on the 2020 GT-R when driven hard.

Whether it’s under hard braking, attacking a corner, or at triple-digit speeds, the latest GT-R Nismo is rock-solid stable. The 59.3-pound carbon-fiber diet the GT-R Nismo underwent for 2020 managed to make an unflappable car even more composed.

The GT-R is an extreme car, and in Nismo form, it’s a track car that is also street legal with touchscreen infotainment and air conditioning systems. My tester’s steamroller-like staggered Dunlops looked like slicks with shallow grooves carved into them. I wouldn’t have dared drive with these tires in heavy rain or standing water.

In Normal mode, the GT-R’s suspension was just on the right side of tolerable. Comfort helped so little that there’s almost no reason to have two different modes. Flipping the suspension toggle switch into Race mode put the shocks to Defcon 1. Brutal is an understatement. Every crack, crevice, bump, undulation, and pebble can be felt through the ultra-stiff structure. Occupants are shaken, not stirred.

The red and black Recaro seats were grippy, but my 5-foot-10 frame barely fit into them, and I’m really not that fat. America, you’ll have to give up the McDonalds to ride this ride.

While the now-ancient 6-speed dual-clutch transmission has come a long way in terms of refinement in the last decade, it’s also still unrefined with its clunks and whines.

Previous versions of the GT-R Nismo were scary to drive on the street because the low-set carbon-fiber front splitter, bumpers, and side sills were susceptible to speed bumps, steep driveways, and wayward squirrels. Now it’s downright terrifying. The front fenders, hood, and roof join the carbon-fiber diet to create a new level of paranoia when handing the keys to a valet.

It costs how much?

What started in 2007 as a value for $70,000 has evolved into something completely different that can push up against a quarter-million dollars. Is this as far as this generation of Godzilla can be developed? It doesn’t seem as if the R36 GT-R is around the corner.

After more than a decade, Godzilla still keeps up with other supercars in the $200,000-plus price range despite its age. That is a testament to how far ahead of its time the R35 GT-R was when it debuted.

The 2020 Nissan GT-R Nismo is still marked by a hand-built engine and a crazy all-wheel-drive system, but now it’s wrapped in carbon-fiber bodywork and a weight-loss program that some cars only dream about. Mishegas.